The administration of the police officer's oath is administered to Class 19-01 during Thursday's graduation ceremony. The Bakersfield Law Enforcement Training Academy graduated 26 officers. 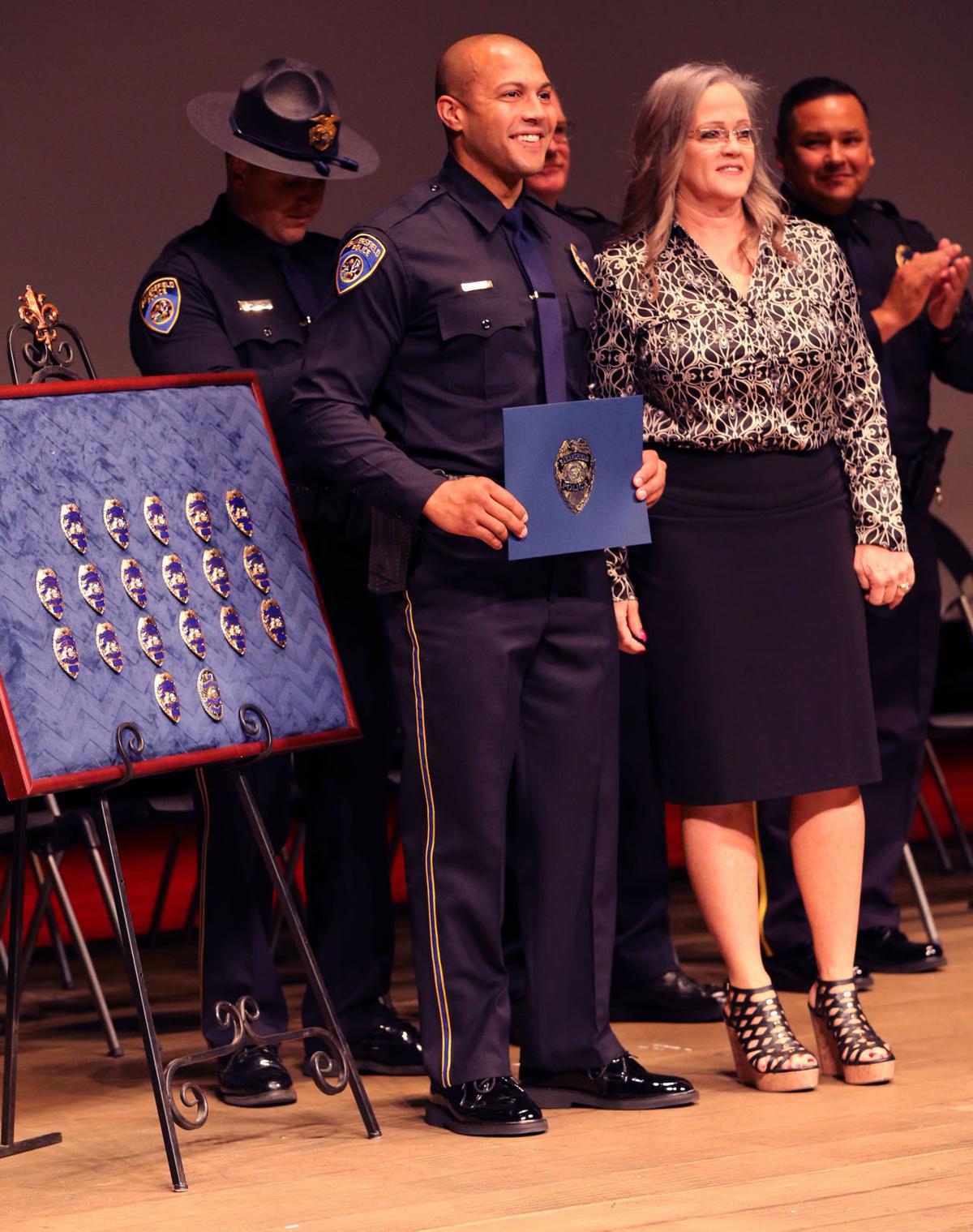 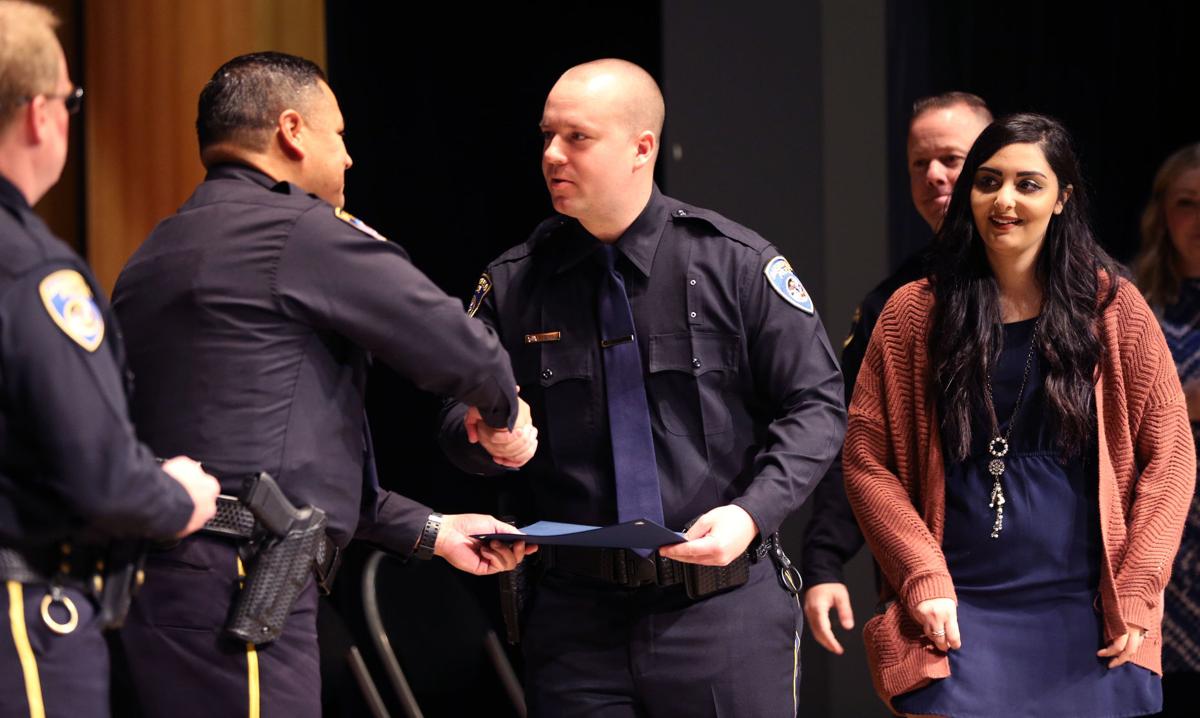 Vincent Sims is congratulated Thursday during the badge pinning ceremony. Sims was one of 26 officers who graduated as part of the Bakersfield Law Enforcement Training Academy Class 19-01. 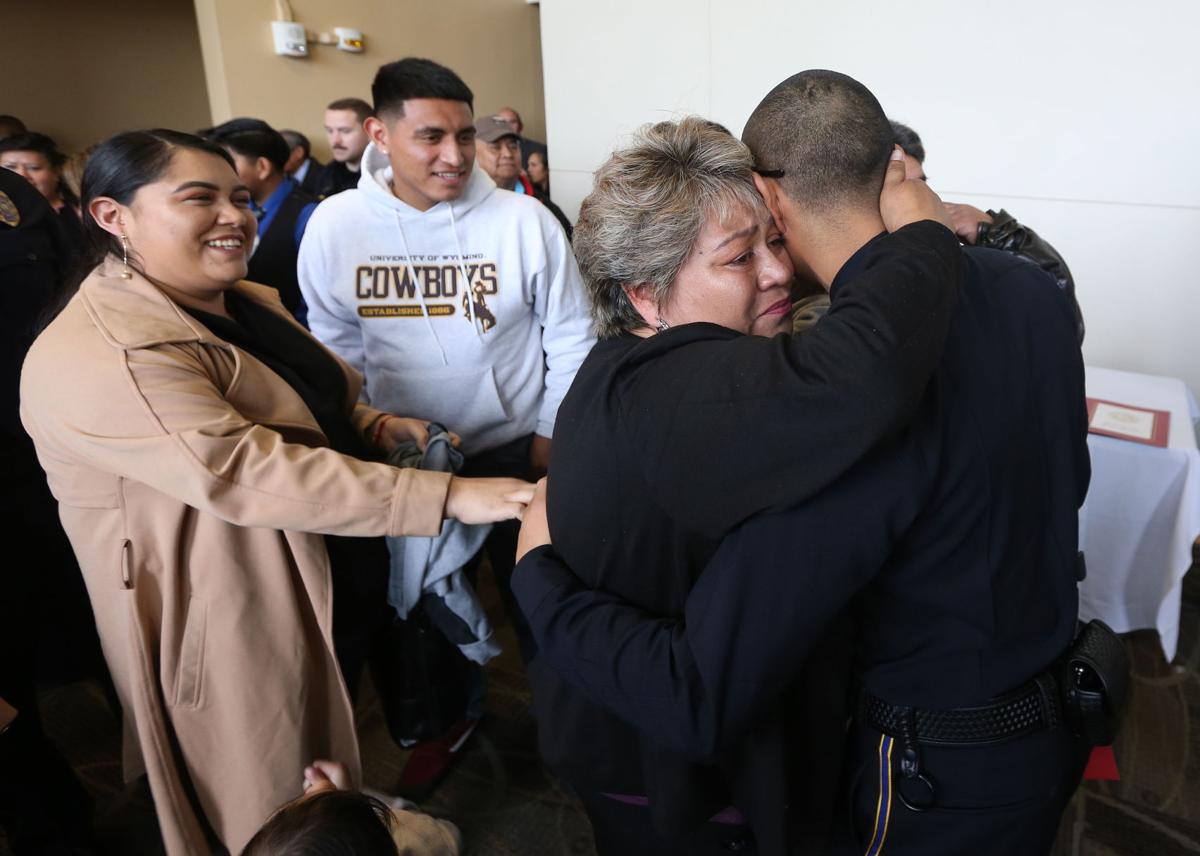 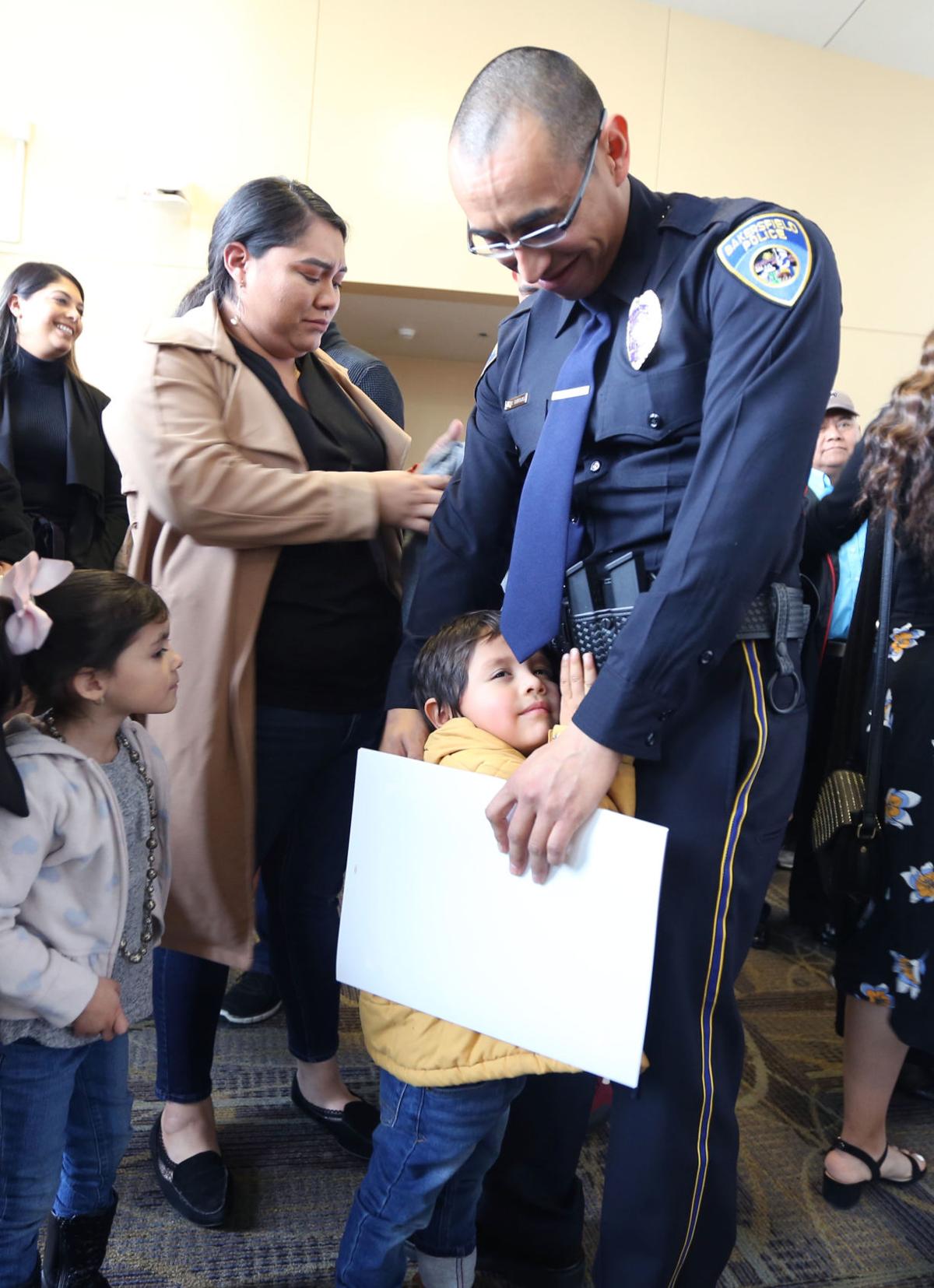 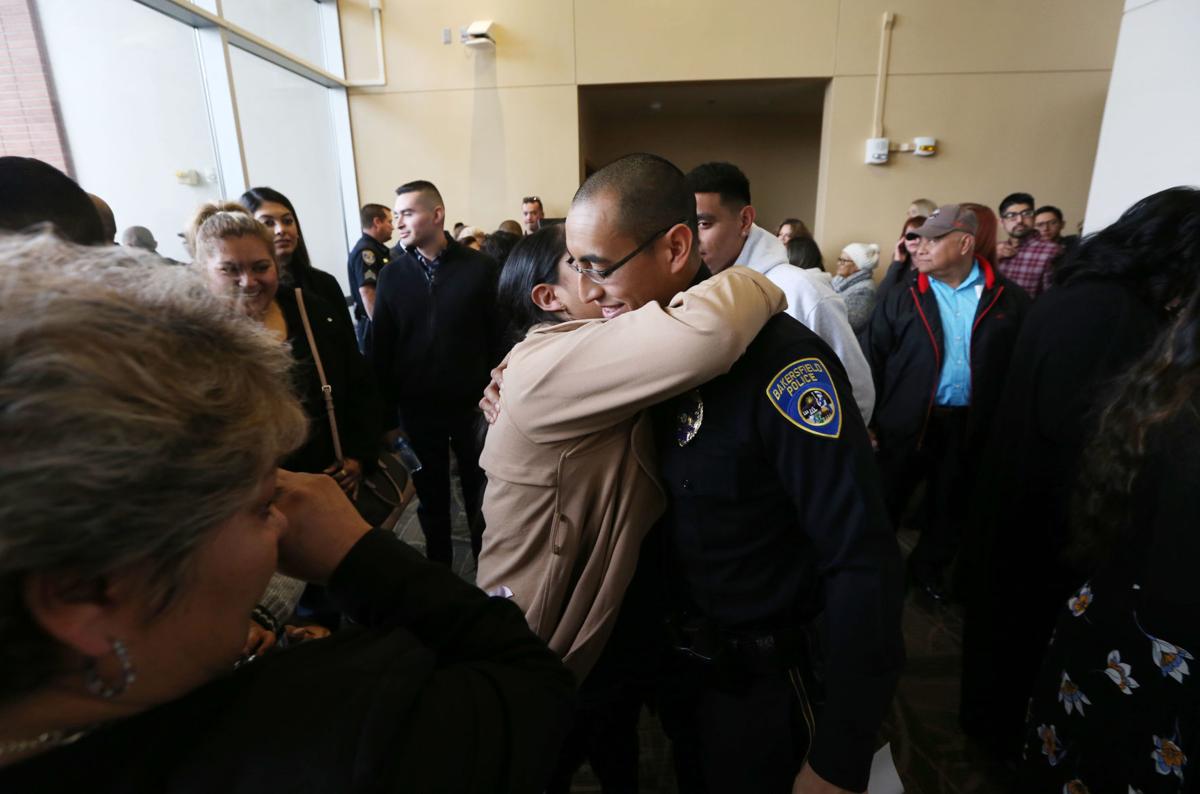 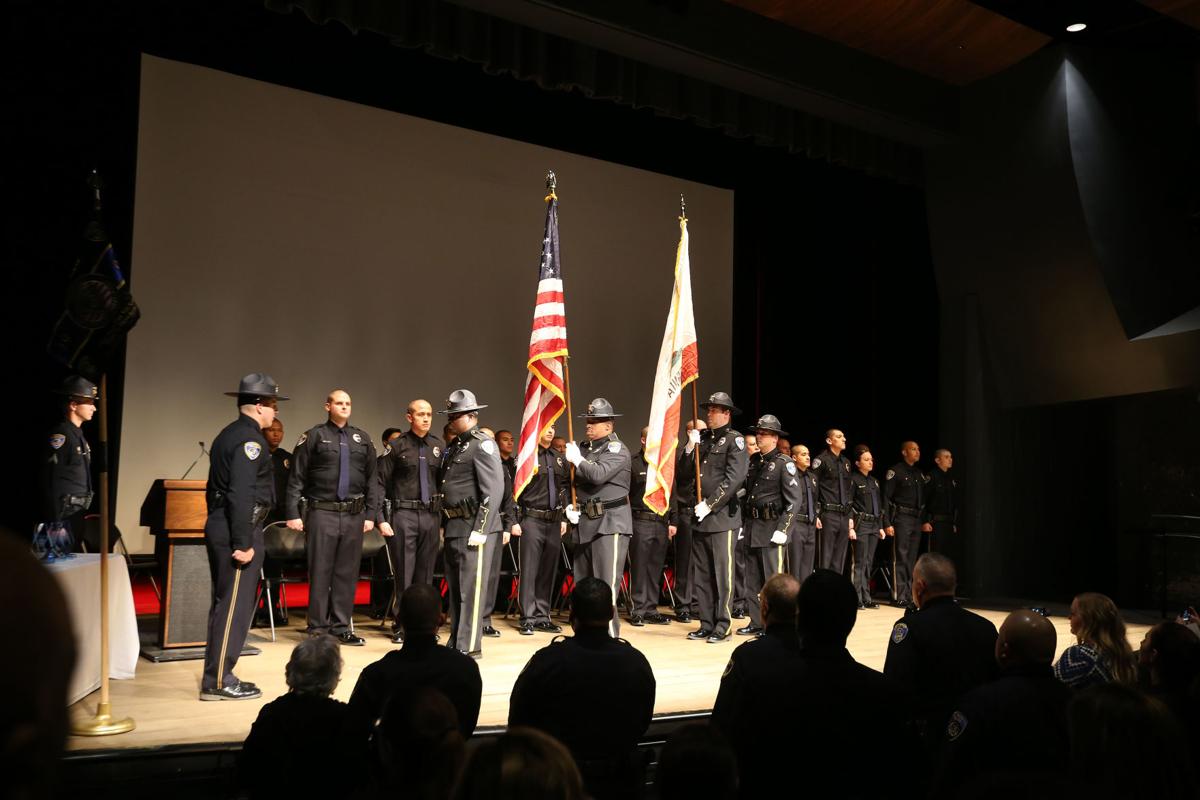 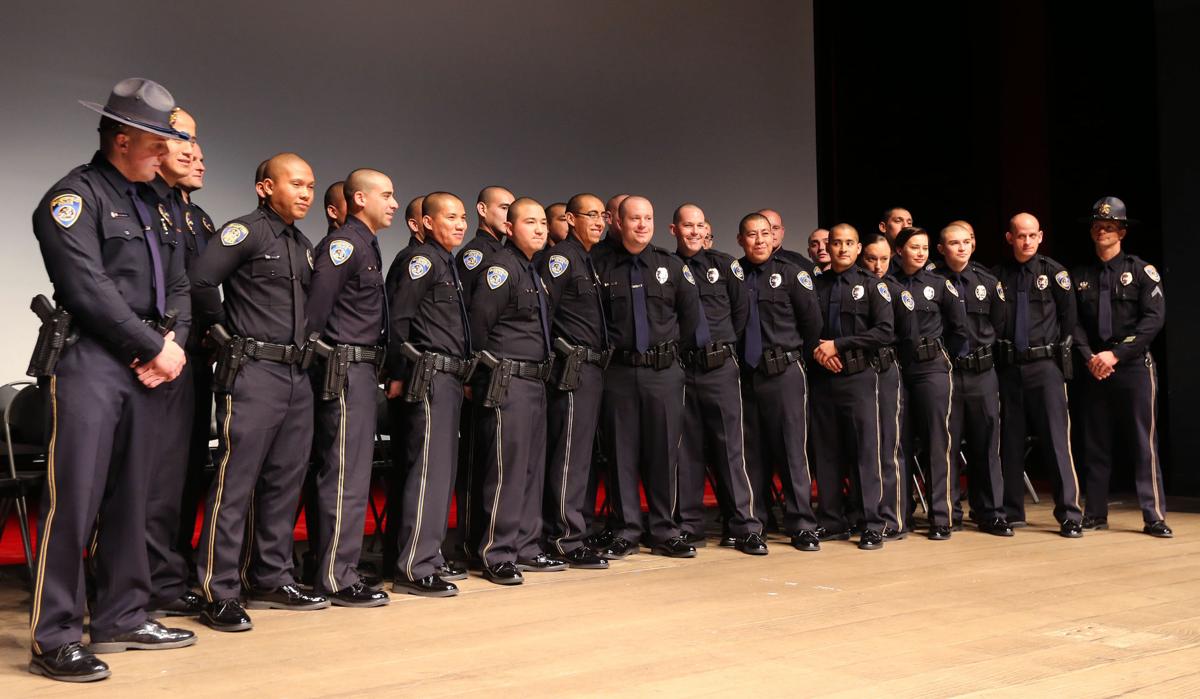 The Bakersfield Law Enforcement Training Academy Class 19-01 graduated 26 officers on Thursday. The Group pose for a photography with their training officer after ceremonies. 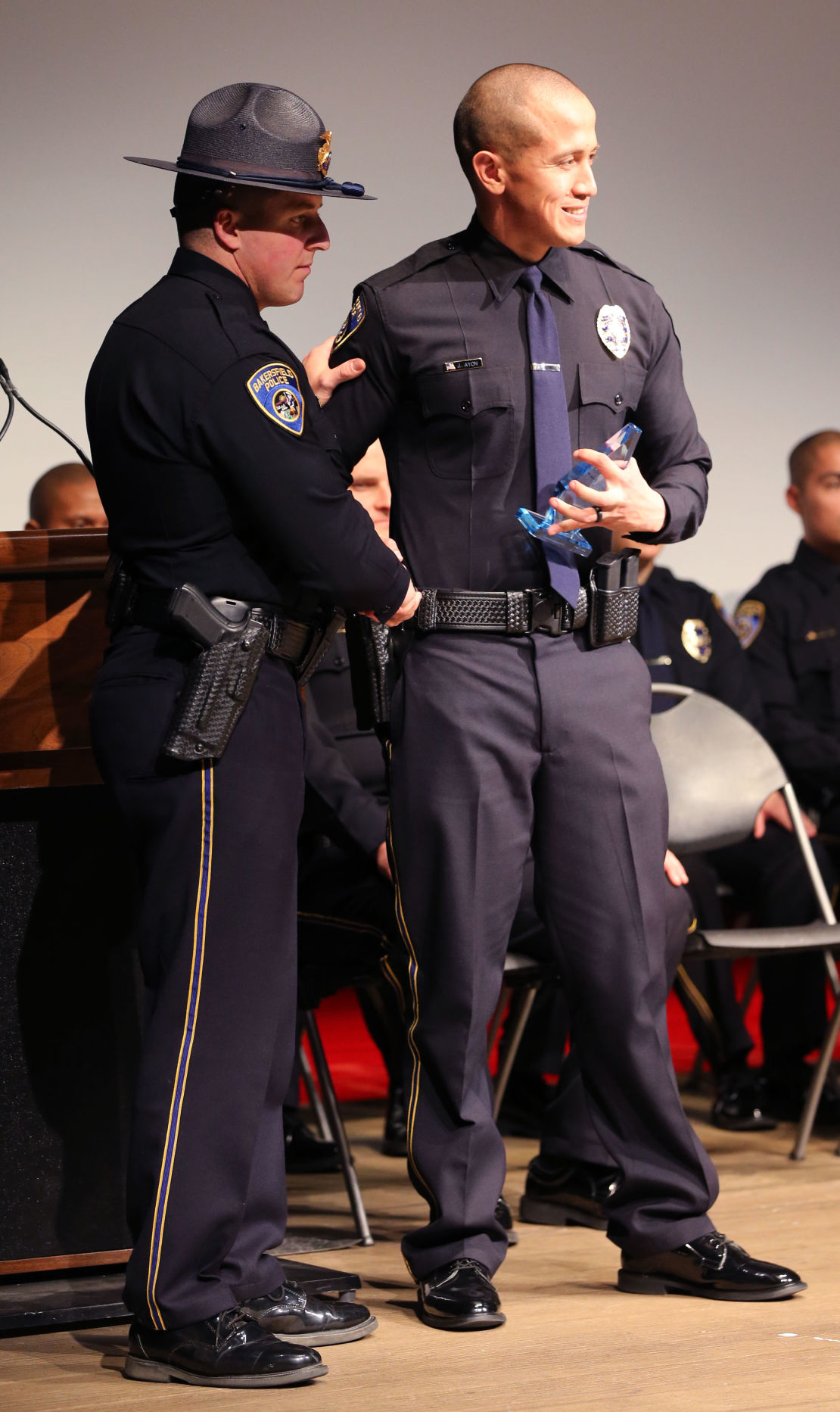 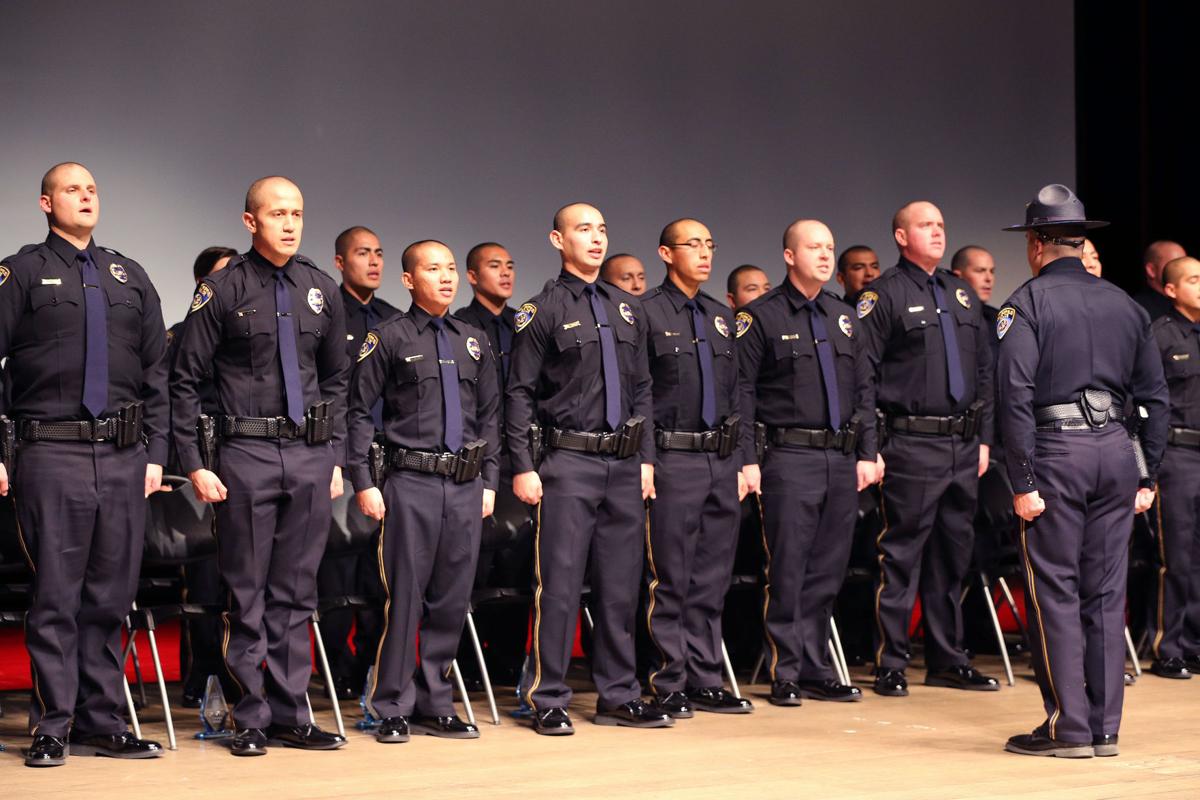 The administration of the police officer's oath is administered to Class 19-01 during Thursday's graduation ceremony. The Bakersfield Law Enforcement Training Academy graduated 26 officers.

Vincent Sims is congratulated Thursday during the badge pinning ceremony. Sims was one of 26 officers who graduated as part of the Bakersfield Law Enforcement Training Academy Class 19-01.

The Bakersfield Law Enforcement Training Academy Class 19-01 graduated 26 officers on Thursday. The Group pose for a photography with their training officer after ceremonies.

The academy began with 40 recruits on Aug. 5, according to class speaker David Hepp. In addition to the prescreening process to join the academy, there was voluntary physical training in March and April, along with a “pre-academy” in June.

“(The academy was) an experience that I’ll never forget. Also one that I never intend to repeat,” Hepp joked.

Nearly every seat in the Edward Simonsen Performing Arts Center at Bakersfield College was filled during the ceremony as friends, family and community officials showed their support for new officers.

Shafter Police Chief Kevin Zimmerman described his department as “midsized” with 33 officers, but said the addition of Davidson will have a “significant impact.”

“(A new officer) is going to add to the strength of what we already have going on and I hand-picked (Davidson),” said Zimmerman. “He was already a Shafter employee working at the jail so he’s already a known commodity and he performed as advertised.”

More reinforcements also figure to be on the way for the BPD. A new academy class is currently underway while another is taking place this summer, according to interim Bakersfield Police Chief Greg Terry. This is a part of the effort to hire 100 new officers in the next three years as a result of the passing of Measure N in November 2018.

“Today’s graduating class is the first class since (Measure N) passed, which has provided critical resources to our Police Department,” Terry said.

Measure N — known as the “Bakersfield public safety & vital city services measure” — is a locally controlled 1-cent sales tax that provides around $58 million annually to the city of Bakersfield to address enhancing public safety, reducing homelessness and bolstering economic development activities, according to the city. The measure went into effect on April 1, 2019.

Class 19-01 was also the first to graduate from the new law enforcement training facility that was formerly Casa Tequila Bar & Grill at 4646 California Ave. The facility was purchased by the city of Bakersfield in January 2019.

“I’m super happy and proud of (Terrazas),” said Noe Terrazas, Eric’s older brother. “I know this is something that he’s wanted for a very long time, so to see him accomplish it makes me really proud and happy.”

Noe said that Eric is following in the footsteps of their older brother, who worked as a deputy for the Kern County Sheriff’s Office and is currently working for the Kern County Fire Department. Noe and his family are from Bakersfield and are looking forward to seeing Eric’s successes as an officer.

“I know he’s going to shine in his career and I pretty much want to see him blossom, especially with him being the youngest one,” Noe said.

Before the academy, Hepp worked at a bank but felt serving the community through the BPD was something he could “truly be proud of.” When asked to sum up his academy experience in one word, “family” came to mind.

“You build these unbreakable bonds with these people that you go through all of this with,” Hepp said.

The new officers will begin their 17-week field training phase on Feb. 3 before they're officially deployed into the field, according to a December public safety and vital services measure update.

“Celebrate today — you’ve earned it — but be ready for tomorrow,” Terry said to his new officers.

It's here. The new year is officially upon us and 2020 figures to be like none other. Here are some of the key issues facing Bakersfield and K…

Talk about BURYING THE LEAD! What a coincidence that on the same day Measure N is found to be based of fraudulent city processes, the OVERLY SUPPORTIVE Californian plasters a news story about how the measure has help put some new cops on the beat “for the safety of us poor city folk.” What a bunch of BS! Never mind the fact that Measure N monies wouldn’t have already been implemented to pay for their training program. TBC coercion.