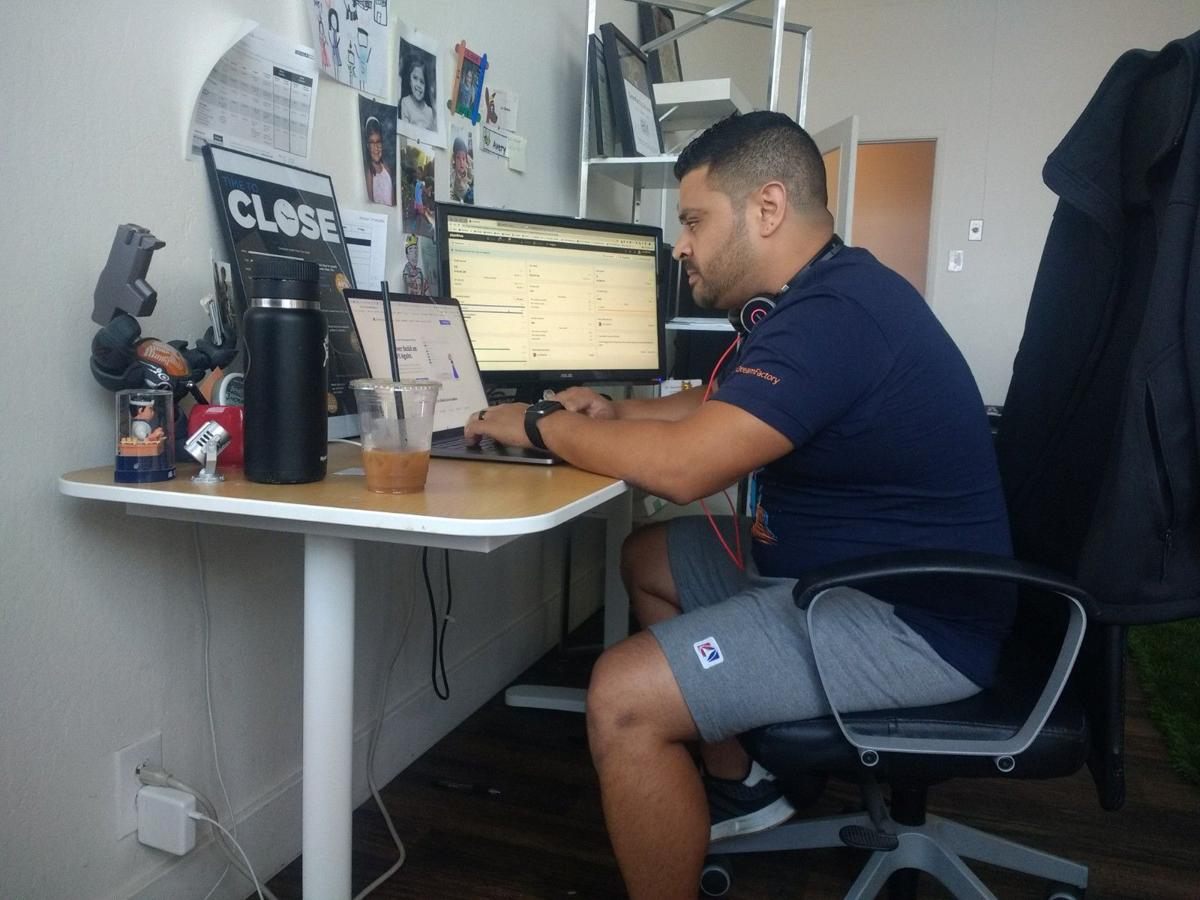 Luis Robert Albertson, vice president of sales at DreamFactory, works remotely from Mesh Cowork LLC in downtown Bakersfield. He said the company is always looking for local talent but that it's hard finding someone with the right technical skills. 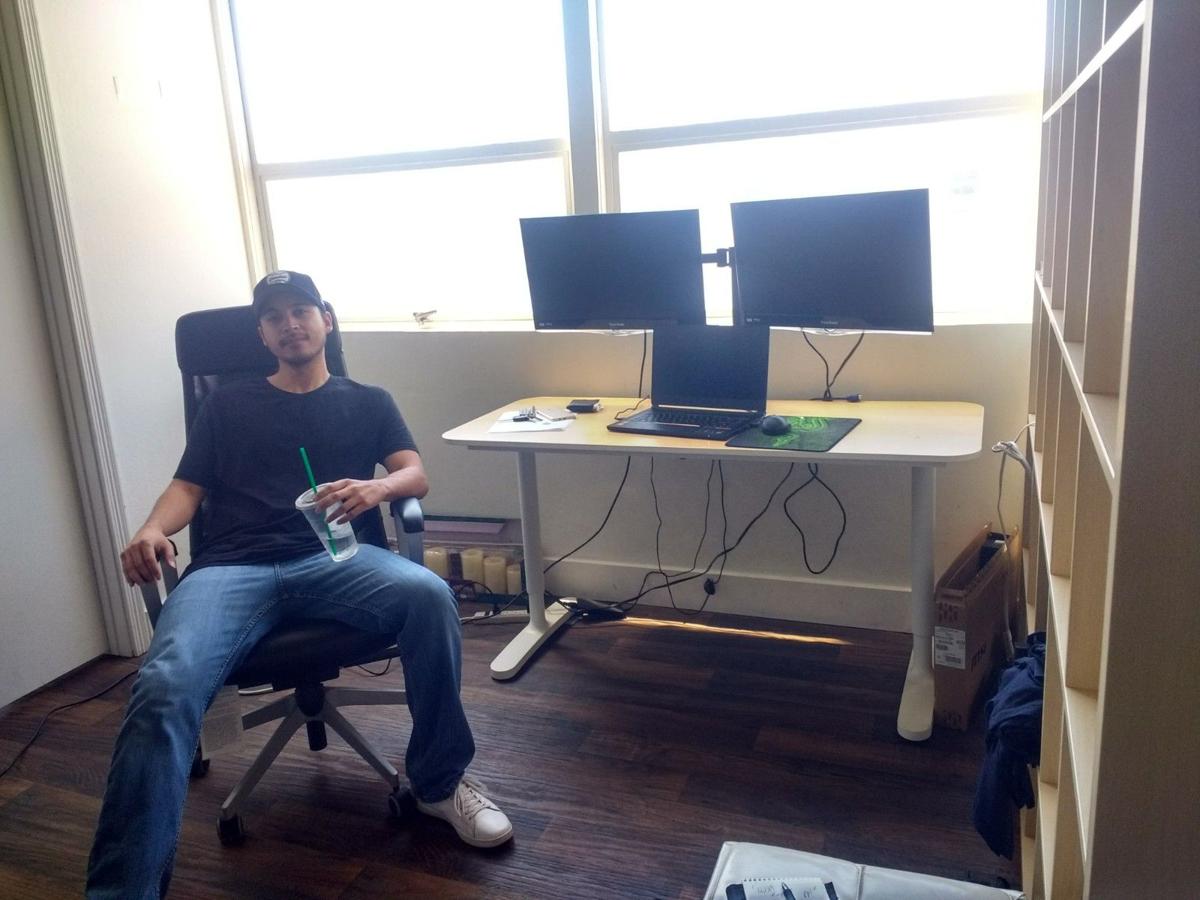 Matt Jimenez is a software developer who lives in Bakersfield and works at Mesh Cowork LLC in the city's downtown. He says there's room for young people to enter the tech industry locally but that not everyone has the motivation to succeed in the field.

Luis Robert Albertson, vice president of sales at DreamFactory, works remotely from Mesh Cowork LLC in downtown Bakersfield. He said the company is always looking for local talent but that it's hard finding someone with the right technical skills.

Matt Jimenez is a software developer who lives in Bakersfield and works at Mesh Cowork LLC in the city's downtown. He says there's room for young people to enter the tech industry locally but that not everyone has the motivation to succeed in the field.

A Fresno tech center's planned expansion to downtown Bakersfield has raised concerns among some industry professionals that the arrival of an outside job-training organization could worsen a local glut of computer workers unable to find good career opportunities in town.

Software developers and other tech professionals in Bakersfield say they continue to face difficult choices between leaving Kern County to pursue their career or accepting a local job with limited prospects for advancement.

"Bakersfield has an abundance of entry- to intermediate-level tech industry employees. What is missing are the senior/principal-level people who can influence business strategy and help lead Bakersfield in its digital transformation," Darin Hoover, who left Kern three years ago to work for Microsoft in Redmond, Wash., said by email.

Ambivalence toward Bitwise Industries' announcement Wednesday it will soon launch local computer coding classes downtown reflects, to some degree, a preference for existing local organizations such as Mesh Cowork LLC, a shared-office "coworking" space that for years has served as the informal home of Bakersfield's tech community.

Bitwise says it wants to work closely with local tech professionals and hopes its multimillion-dollar investment in Bakersfield will create jobs, attract outside employers and lead to creation of new businesses, as it has done in Fresno.

Bakersfield software developer and tech entrepreneur Kevin Mershon said although he appreciates the sudden attention on the city's tech industry, he was disappointed that people now enthralled with Bitwise have ignored the tech industry already in place locally.

The biggest challenge is demand side, he said: The local market for commercial software is "all over the map," with businesses typically insisting on full ownership of the intellectual property behind their software.

As an alternative, Mershon said, small and midsize local businesses should switch to standardized software that would help create more local computer-related jobs.

An important distinction in Bakersfield's tech community is between local employment and remote assignments. Although the field can lend itself to contributions from skilled individuals working anywhere in the world, it also benefits from face-to-face collaboration.

At Mesh, located upstairs from Dagny's Coffee Co. at 20th and Eye streets, tech workers labor long hours for clients or employers that may be on other continents. Individuals such as these don't jockey for local jobs so much as they compete with every other coder or web developer worldwide.

Matt Jimenez is a good example. Formerly a computer technology student at Bakersfield College, the 28-year-old software developer struck out on his own three years ago and now earns nearly six figures working 50 hours a week for a stock options trading company.

He said motivation is the key to success in the field, adding, "I definitely put in a lot of work every day."

One desk over inside Mesh, Bakersfield native Luis Robert Albertson, 38, manages a team of four remote workers as vice president of sales for DreamFactory, an automated computer connectivity company with 25 employees and offices in Las Vegas, Ohio, Australia and Japan.

He welcomed Bitwise as a potential source of people with the kind of technical skills his company seeks but has a hard time finding.

"We're hunting for talent all day every day," he said.

Several Bakersfield tech workers weighed in on Facebook about Bitwise's proposed expansion. Some shared stories of trying to find a job in the industry locally, others resigned themselves to leaving their hometown to find computer work elsewhere.

"Show me an embedded/firmware engineering position in Bakersfield with opportunities for career growth and exposure to the newest technologies and I'll show you the house in Seven Oaks that I'll be buying when I take the job," Wyatt Ogden wrote in a post. "Otherwise, it's the Bay Area rat race for me."

Ammy Singh wrote in the same online comments string that there's "basically zero computer engineering opportunities in Bakersfield unless you wanna go into IT (an information technology support role) or web design."

"Closest to Bakersfield is Ridgecrest at China Lake which is in the middle of nowhere, or Edwards Air Force Base, where you'd have a long commute from Tehachapi," she wrote.

Dustin McCraw earned a degree in computer science at Cal Poly San Luis Obispo in 1996 before moving to Bakersfield to raise a family with his wife. He has worked since then for local and out-of-town tech companies and now works remotely for a company based in Boulder, Colo.

He compares the debate over Bitwise's plan to a chicken-and-egg problem: "Can you start a company and attract talent? Or do you take talent and start a company?" he asked by email.

He suggested there should be more focus on local efforts to grow Bakersfield's tech industry.

"With bright spots like the Bay Area, New York and Seattle, where you know you can find great teams to work with, how can you make Bakersfield as attractive?" he asked.

"If we want to keep more people in Bakersfield," he continued, "we have to be much more vocal in the opportunities available and celebrate the successes of local business. Bitwise has done a great job of that in Fresno."