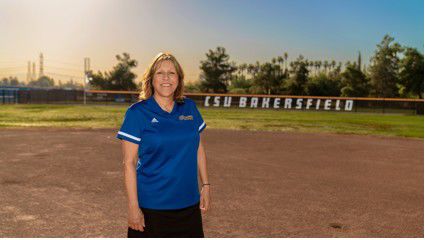 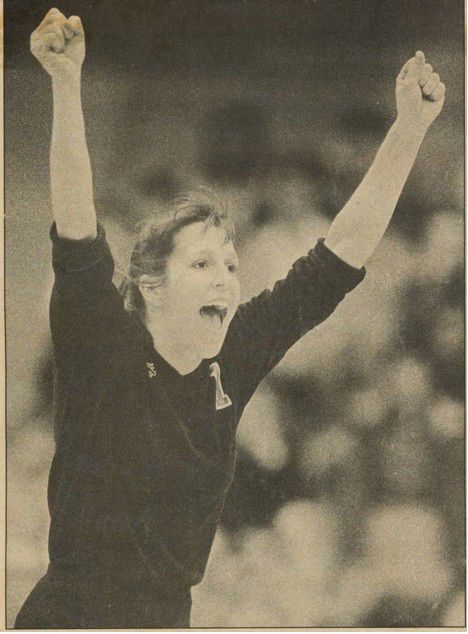 During the three years Langston played volleyball for Cal State Northridge, the Matadors reached the finals every year and won once. 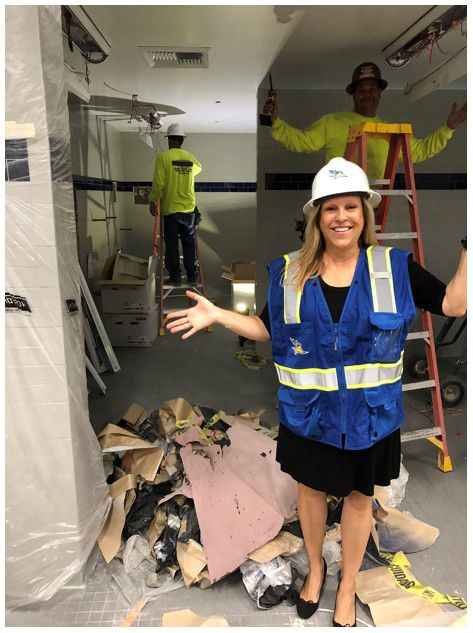 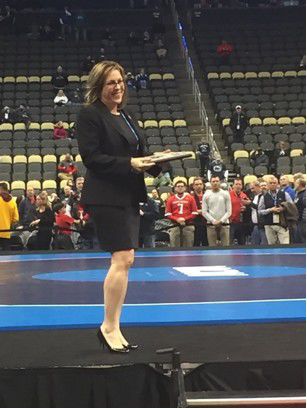 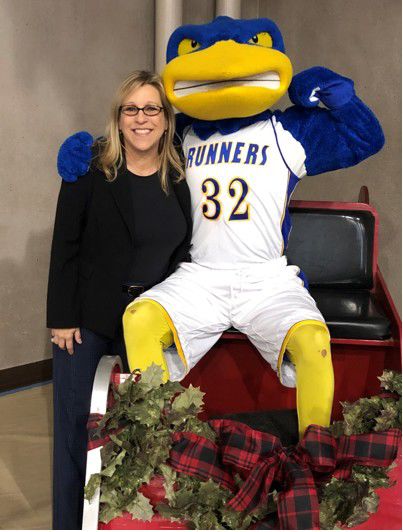 During the three years Langston played volleyball for Cal State Northridge, the Matadors reached the finals every year and won once.

Ask Karen Langston why it’s such a big deal that CSUB is joining the Big West Conference and she’ll take you back to a women’s volleyball tournament in McAllen, Texas, a few years ago.

As the No. 5 seed, the Roadrunners entered the Western Athletic Conference Tournament not expected to do well. They ended up beating both the No. 1 seed and No. 2 seed (which also happened to be the host) to win the whole thing.

But only eight CSUB supporters were there to see it and help celebrate, taking away some of the exhilaration.

“The whole magic of sports for the student athletes and for the fans is to have support in the stands, to have people cheering,” said Langston, CSUB senior associate director of athletics and a 2009 alum.

There will be many more opportunities for magic when CSUB begins competing in the Big West on Wednesday. All but one of the conference’s schools are in California, which should mean more fans in the stands at home and away (eventually), more revenue and exposure for the university and, most importantly, a better quality of life for the athletes.

The transition is also a huge career milestone for Langston, who's been on the front lines of fighting to get CSUB into the Big West for 15 years.

“A lot of work has gone into getting here, getting to this moment,” said Langston, 54. “Now that we’re here, we have an opportunity to make a really, really strong run in this conference and it’s really a game-changer.”

Look at a map and you’ll see why the Big West is such a good fit for CSUB. The WAC’s schools are in eight Western and Midwestern states including Texas, Illinois and Missouri. Student-athlete travel can be grueling.

“Right now they get up at three or four or five in the morning on a Wednesday, drive to L.A., get on a plane, fly to Chicago,” Langston said as one example. “They eat, practice, go to bed, get up.

“…I mean it's half the week that they are just away from their friends, their apartments, their cats, their family, their classmates, their professors.“

By contrast, all but one of Big West’s schools are in-state. The Roadrunners won’t have to travel as much, and their loved ones will get to watch them compete more often. CSUB will save money on travel and make more money when visiting fans come watch their team play in Bakersfield.

And bigger crowds should mean a better CSUB fan experience.

All of that is why CSUB administrators have worked so hard to earn a Big West invitation. Langston’s primary role has been crafting the positioning statements explaining why CSUB belonged: its commitment to upgrading facilities, its competitiveness level, its high exposure in a nearly 1 million-person media market and its strength of staff.

“She has been a part of pretty much every discussion and every plan that ultimately led to us getting into the Big West,” said CSUB Athletics Director Ziggy Siegfried.

Langston, he said, brought to it what she brings to everything she does: a laser focus on, and a relentless push to achieve, whatever goal is in front of her.

“The first couple years, I couldn’t get an athletics master plan for facilities off the ground, so I took that task from one individual and gave it to Karen,” he said. “In six to nine months, it was done.

“That’s what I do with all kinds of stuff. When I need something done, I give it to her.”

Langston has been getting stuff done in sports her whole life, beginning as a young athlete growing up in Bakersfield.

“My dad was a contractor and he would get home a little earlier than someone with a normal 9-to-5 job,” she said. “If I wasn’t already in some after-school sports program, I’d be like, ‘Dad, let’s play catch. Dad, let’s shoot baskets.’”

Langston played basketball, volleyball and softball at North High School before going on to a stellar collegiate volleyball career. During her three years at Cal State Northridge, the Matadors made it to the national tournament finals every year, winning once. Her senior year she was the starting setter, in essence the quarterback of the team.

Langston earned a bachelor’s degree in business administration with a specialization in marketing at Northridge. After an internship with the TracyLocke advertising firm in Los Angeles, she went into advertising sales at Bakersfield television station KBAK.

That led to similar work at stations in San Francisco before CSUB Athletics Director Rudy Carvajal, impressed by her accomplishments in the private sector, asked her to come work for him creating a corporate sales program and marketing department.

“From the very beginning, she was highly successful because she understood how businesses operate,” Carvajal said. “She hit the ground running and strengthened and expanded our base of support both internally and externally.”

Langston eventually took on fundraising responsibilities in addition to her marketing ones and excelled at both, he said.

“Her mantra was always, ‘I can do it. Give me the opportunity,’” Carvajal said.

Langston has been CSUB athletics’ chief fundraiser ever since, raising an estimated $15 million. She’s secured probably three to five of the largest gifts in CSUB Athletics history, Siegfried said.

“She’s not pushy,” Mary Trichell, a generous CSUB supporter, said when asked what makes Langston good at her job. “I don’t like to be pushed.”

Langston also took over and modernized ticketing operations, served on the committee that created the logos athletics has been using since 2005, and the master plan she developed has “transformed” facilities, Siegfried said.

That includes renovated locker rooms, installation of bleachers and a press box at the baseball fields, and new seats, a new video board and a new sound system at the Icardo Center.

And as conference affiliation shifted, Langston figured out what it would take to get CSUB game broadcasts on ESPN platforms as required by the Big West. She literally called up the network and asked, “How does an independent (broadcasting) agreement work? If I do this, am I going to get fired? Do I have to pay for it? Do you pay me?”

All sports that compete in the Icardo Center, including men and women’s basketball, wrestling and volleyball, got on ESPN3 immediately. All CSUB game broadcasts will be on the network when competition resumes in 2020-21.

TAKING TO THE MAT

Langston has been to every major U.S. sporting event, from the World Series to the NBA playoffs to the Super Bowl. But she’s enjoyed none more than the national collegiate wrestling championships.

More than 20,000 fans from 75-plus schools pack the stands of an arena as multiple wrestling matches unfold on the floor below. They’ll be watching one match when suddenly a roar from another corner of the arena will divert their attention to a different one.

Usually one kid has just pinned another, and his coach has run out to hug him.

“It’s very physical. It’s very emotional. It’s very, very difficult,” Langston said of the sport. “And so when you see all of that, when you see what the kids, the coaches, the officials, the NCAA, the fans put into it, it’s impossible to not just dive in.”

And dive into collegiate wrestling she has. Langston is also chair of the NCAA Wrestling Championships Committee, the first woman to hold the position.

The committee guides and oversees for members the NCAA staff work that goes into putting on the behemoth event, which was scheduled to be held in a football stadium for the first time — in Minneapolis’ U.S. Bank Stadium — in March but was canceled because of COVID-19.

The committee makes at-large selections, seeds all the participants and builds tournament brackets. There are 10 weight classes and 33 student athletes in each weight class, for a total of 330 competitors.

During her first year, Langston really got to know how things work, including by asking a lot of questions. It gave her instant credibility, said Brian Smith, head wrestling coach at the University of Missouri-Columbia and a former member of the wrestling committee.

“She just had a lot of passion for the sport, so she immediately earned everybody’s respect,” said Smith, joking that Langston still runs things by him even though he left the committee. “She wasn’t doing this to put something on a resume.”

Langston was very collaborative, encouraging everybody to speak up, not letting negative chatter derail “out-of-the-box thinking” (like holding a wrestling tournament in a football stadium), and adeptly explaining decisions to questioning coaches, he said.

“She just gets up there with a room full of coaches and talks to them,” Smith said. “Maybe she has fear, but she doesn’t show it.”

Langston really ran with the decision to hold the championships at U.S. Bank Stadium and it’s a shame it had to be canceled, said Anthony Holman, managing director of championships and alliances at the NCAA.

Langston paid particular attention to enhancing the athlete and fan experience at the tournament and inviting more college administrators to attend, he said. Her goal was to showcase how special the event is in order to encourage continued and even expanded financial support for collegiate wrestling programs.

“She became a huge fan and wants to provide that same experience to others,” Holman said.

College athletics administrators typically move on after three, five, six years, Langston said. She’s stuck around CSUB so long, she said, because the work is never done there, and interesting challenges always lie ahead.

“I was brought here to start something, and I did,” Langston said. “Then we got a new president (Horace Mitchell) and started the Division I transition. That work was incredibly interesting.

One of those building blocks is helping reinstate athletics training and competition in the age of COVID-19.

Langston and other members of CSUB’s Athletics COVID-19 Action Team are working on plans to safely bring athletes back for voluntary workouts by addressing cleanliness, testing, education and contact tracing. Further down the line, there may be competition without fans in the stands.

All of the committee’s work must clear not only CSUB’s administration but local health officials and the California State University Chancellor’s Office.

There’s also the issue of whether fans will want to come to sporting events when it’s allowed, Langston said. CSUB has an older fan base, she said, and its members have been told they’re better off staying home.

Langston thrives on these kinds of challenges.

“I get out of bed every day and think to myself, ‘OK, there’s an army of dragons out there,’” Langston said. “’Which ones am I going to slay today?’”

Christine Bedell is an Alumni Engagement Specialist  at Cal State Bakersfield. She can be reached at cbedell1@csub.edu