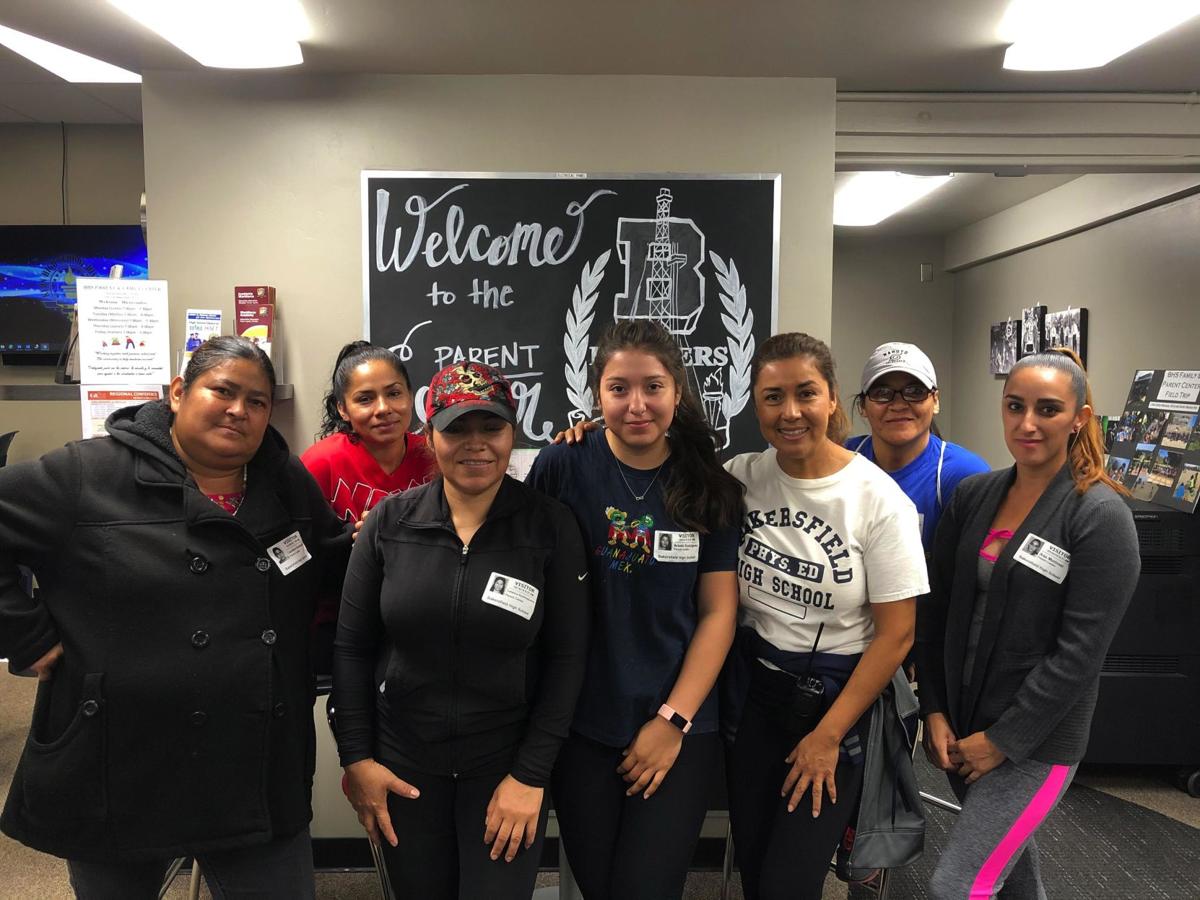 Tere Quintana, school community specialist at the Bakersfield High School Parent Center, shows what resources are available to parents who utilize the center. 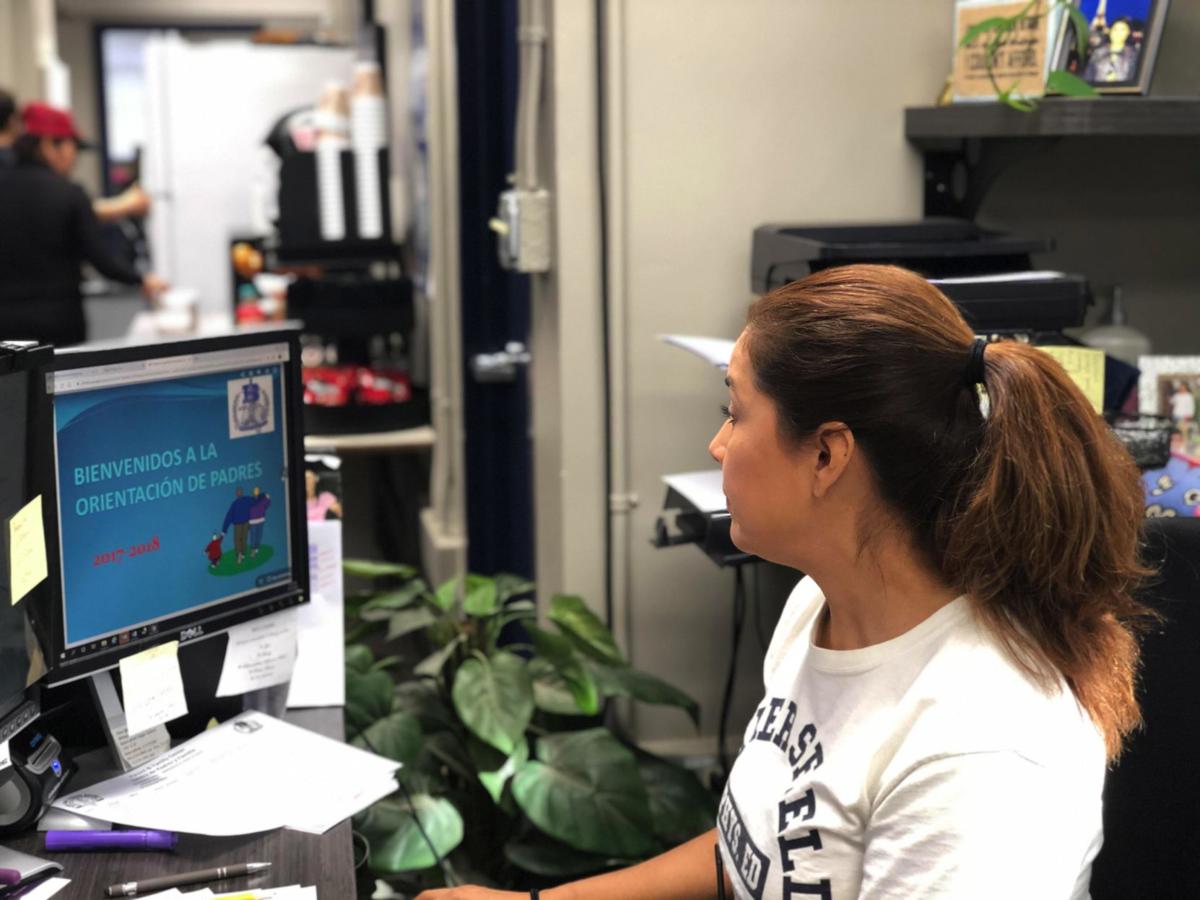 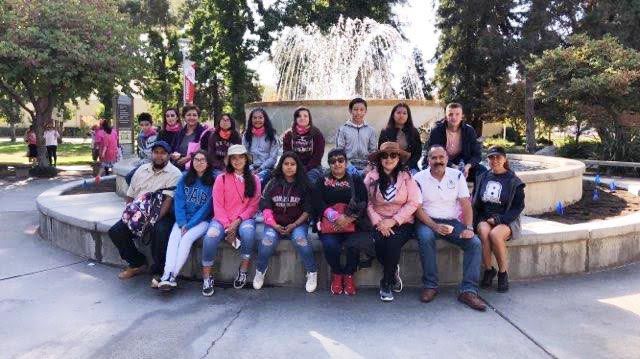 The Bakersfield High School Parent Center took several parents and students to Fresno State for a college tour on Oct. 12.

Tere Quintana, school community specialist at the Bakersfield High School Parent Center, shows what resources are available to parents who utilize the center.

The Bakersfield High School Parent Center took several parents and students to Fresno State for a college tour on Oct. 12.

Catalina Ramirezjuarez wondered why she was not receiving any Bakersfield High School communication in the mail this year.

Turns out the wrong address was listed under her children's information. So she went into the school's Parent Center to get it fixed.

It was changed to the correct address, but more than just that, she found a place on campus that made her feel welcomed and provided classes so she could participate in her children's education, such as how to navigate the online student and parent information system, Synergy.

"I had two students that graduated, but I was never involved," Ramirezjuarez said in Spanish, translated by Tere Quintana, school community specialist at the BHS Parent and Family Center. "When I came to fix the address, I noticed there were activities I could get involved with. Now I can motivate my students to keep going in school and do better."

She's begun receiving mail from BHS, which she says helps her be more aware of what's going on at school.

It doesn't just have to be the wrong address listed that has some parents in the dark when it comes to their child's education. Language barriers, lack of knowledge or even fear make it more difficult for them to effectively help their children.

That's where the Kern High School District Parent and Family Centers come into play. The first one opened in the 2015-16 school year, and each of the district's 18 comprehensive high schools have one on site as of this year.

The focus of each of the centers is to engage parents and families as an integral part of the success of KHSD students.

Quintana, who has led the BHS Parent Center since its development in 2016, said having parents involved in a child's education is crucial, even for those who don't speak English. The center provides engagement workshops, English classes, and walking and book clubs.

"We want the parents to learn how to navigate the grading system. I have a workshop and teach the parents how to check their grades," she said. "Once they understand how the grades work, they can really understand and focus, even if they don’t speak English. They can still help their students by pushing them to go to school."

Quintana knows herself what it's like for these parents. After she and her family moved to Los Angeles from Mexico, she did not go to school. Instead, her parents needed her to work.

They moved to Delano and at 13 she was working in the fields, she said. One day, however, someone reported her father and he had no choice but to enroll his children in school.

Most children would be excited to spend time with people their age rather than work in the fields, but Quintana had a different experience. The main challenge was having to learn English.

"Sometimes I felt like I didn’t fit in with students that spoke more English than Spanish. Their way of living was different than ours," she explained.

By the middle of her senior year of high school, Quintana's parents got divorced and went their separate ways, leaving her and her siblings on their own. She had to drop out of school to take care of her younger sisters and brother.

That experience taught Quintana how important it is for parents to encourage children to go to school and do the best they can do, which she does with her three kids.

"I always push them to do better. I tried to raise them in a different way," she said. "I was involved with their sports and school, I would talk to them all the time. I just wanted to break the chain and do something different."

If she could go back in time, she said she wouldn't change a thing because her experience has allowed her to understand what many BHS parents are going through and how she can better help them.

If Spanish-speaking parents want to meet with their child's counselor, Quintana helps set up a meeting and attends it with them. Even if a parent needs help outside of her department, she's there with them.

She also takes parents and children on college tours to see what options are available after high school. The center even helps parents of seniors with the process of applying for financial aid.

Ana Martinez attended a recent visit to Fresno State and said she was amazed to see a swim meet and how large the library was on campus. More than that, she learned all that is required of her child to enroll at the university.

Children also see the benefit this center has on them and their parents. Martinez's son comes to the center for tutoring about two or three times a week, which has helped with his academic performance.

Arleth Rodriguez, a BHS alumna and BC student, said her mother wasn't able to help her while she was at BHS, but she's gotten more involved with her other children since discovering the Parent Center.

"What teenagers are going to tell you I have this and that due? My mom already knows and informs them that they have a test, and it helps a lot," Rodriguez said. "Even though it bothers them, later on they’ll see she did a lot."

For more information on the KHSD Parent and Family Centers, visit https://www.kernhigh.org/apps/pages/index.jsp?uREC_ID=684027&type=d&pREC_ID=1124981

Many services offered bilingually in Spanish and/or English