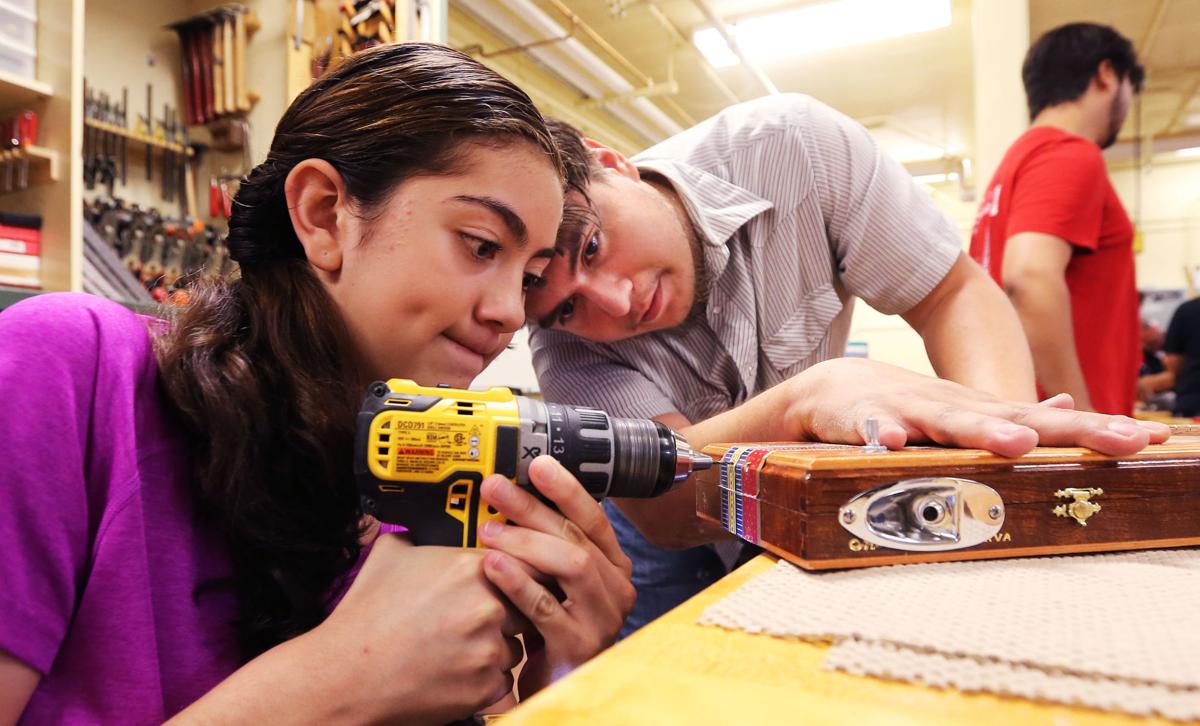 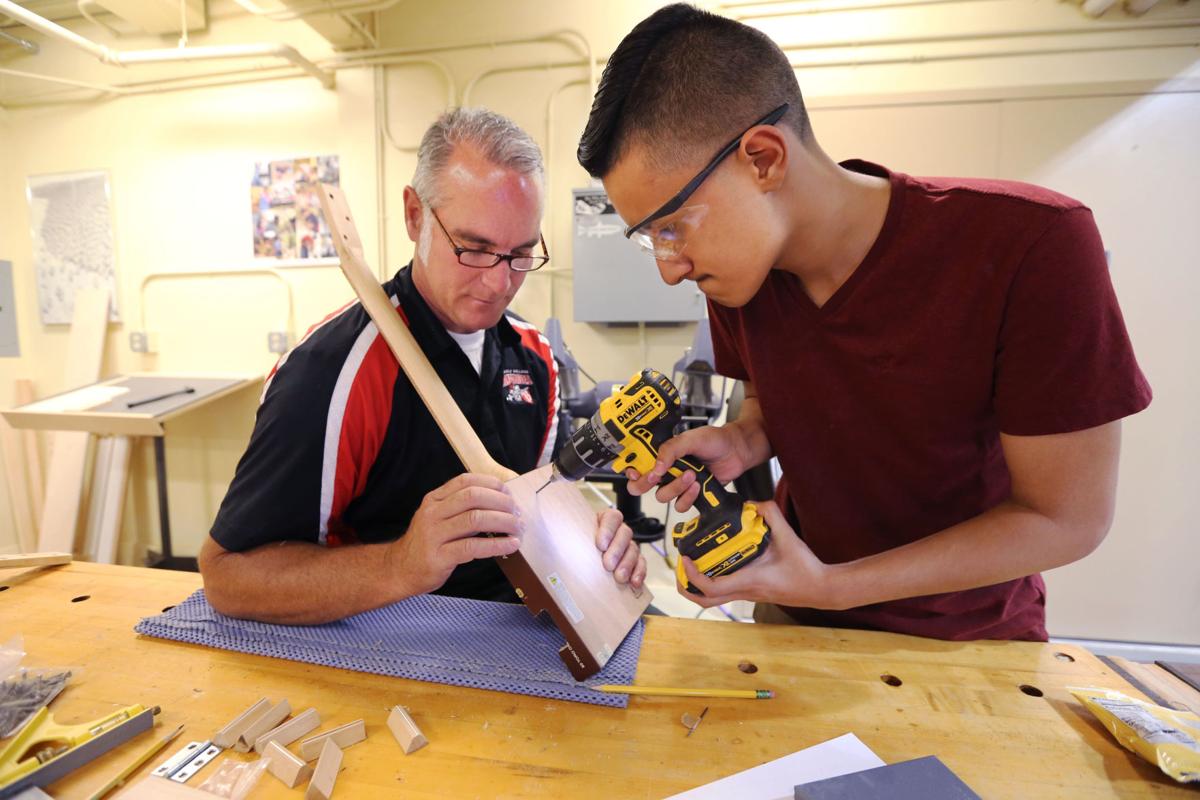 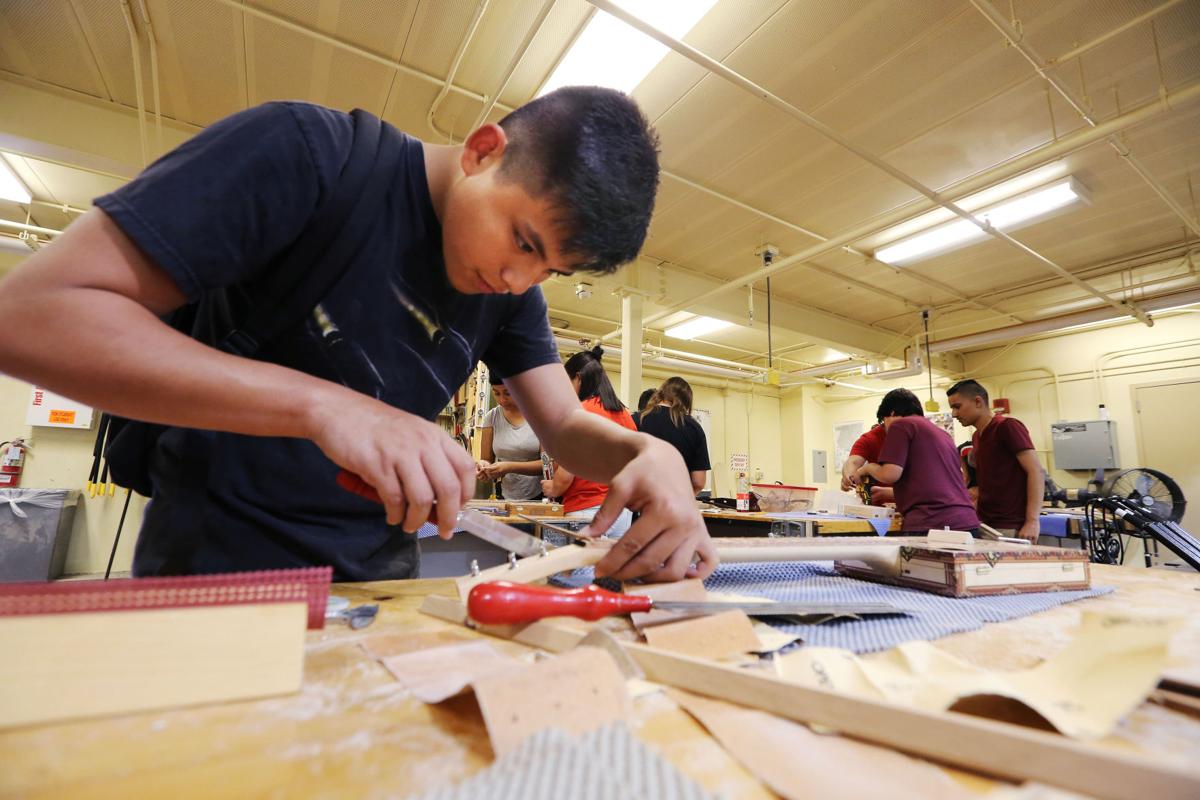 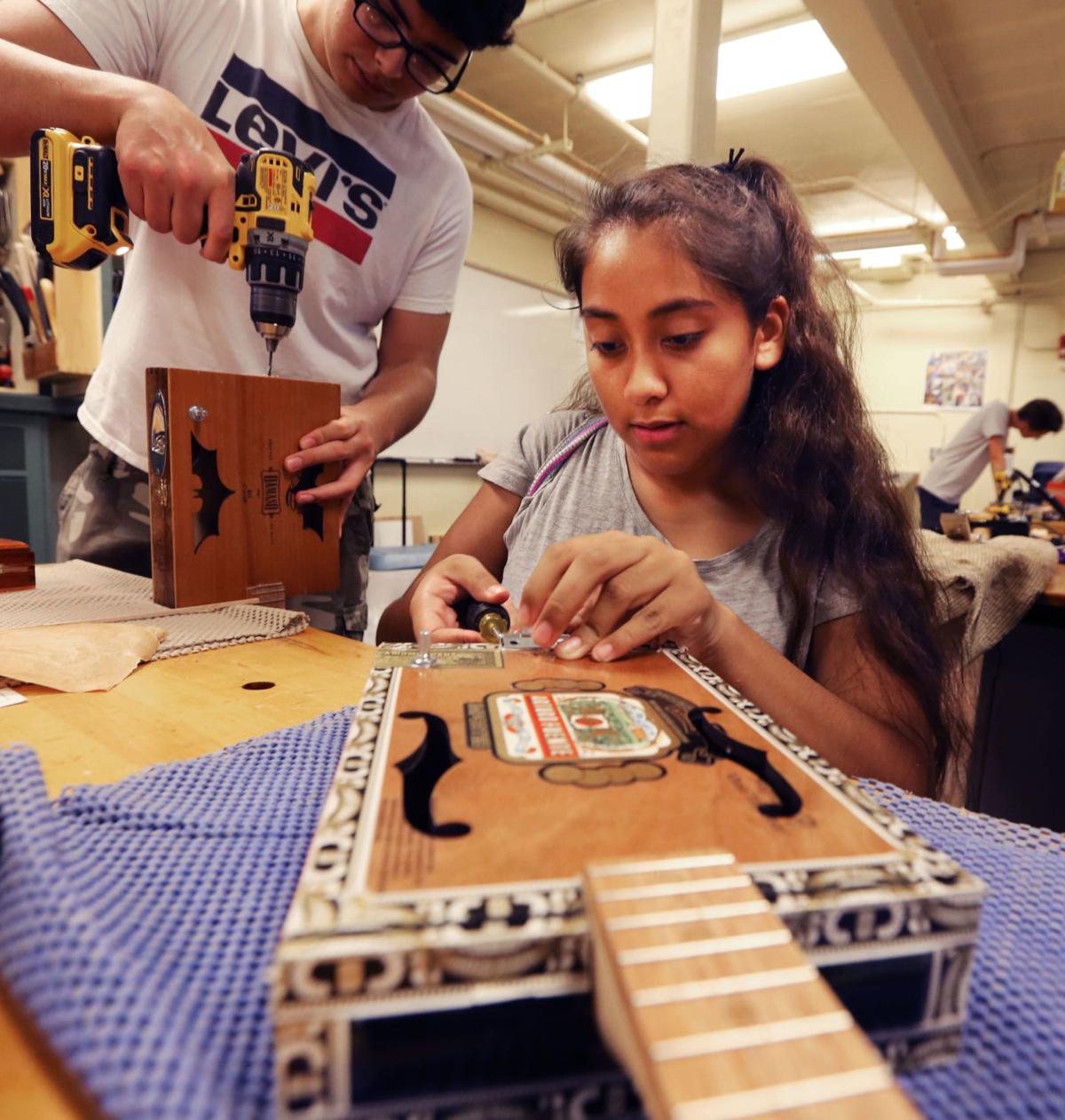 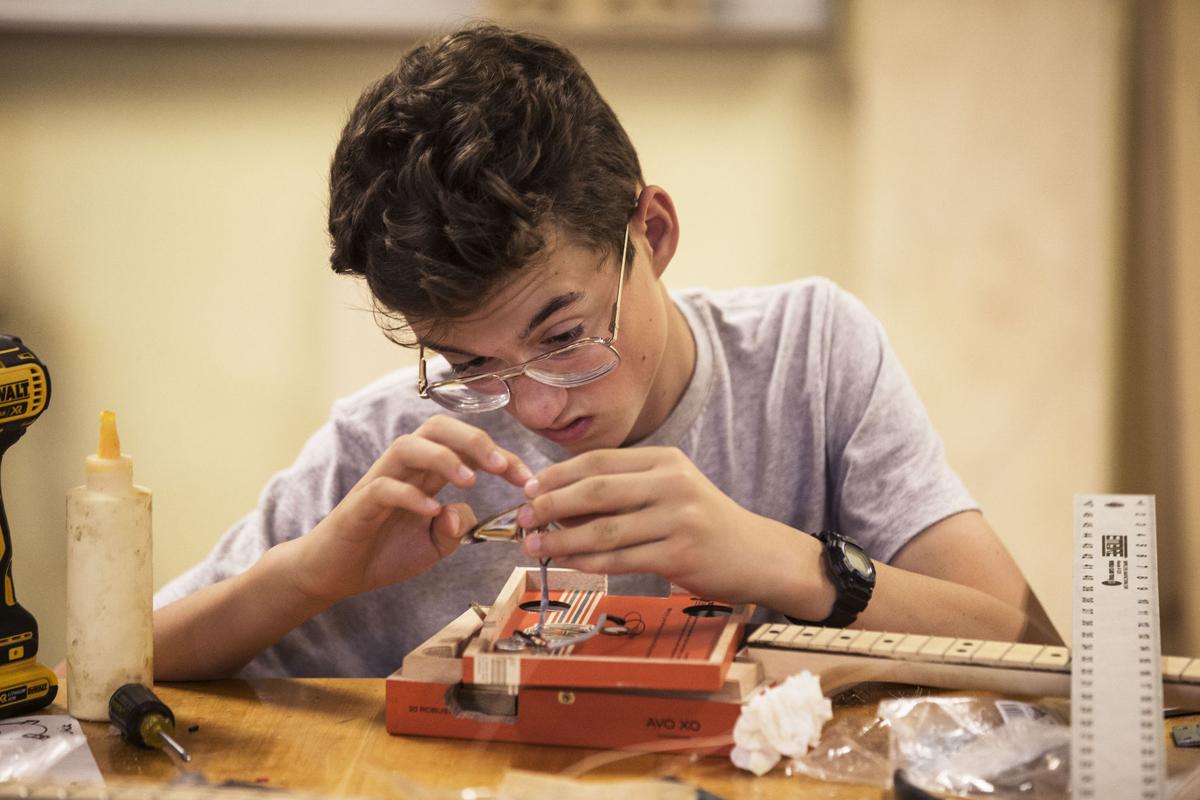 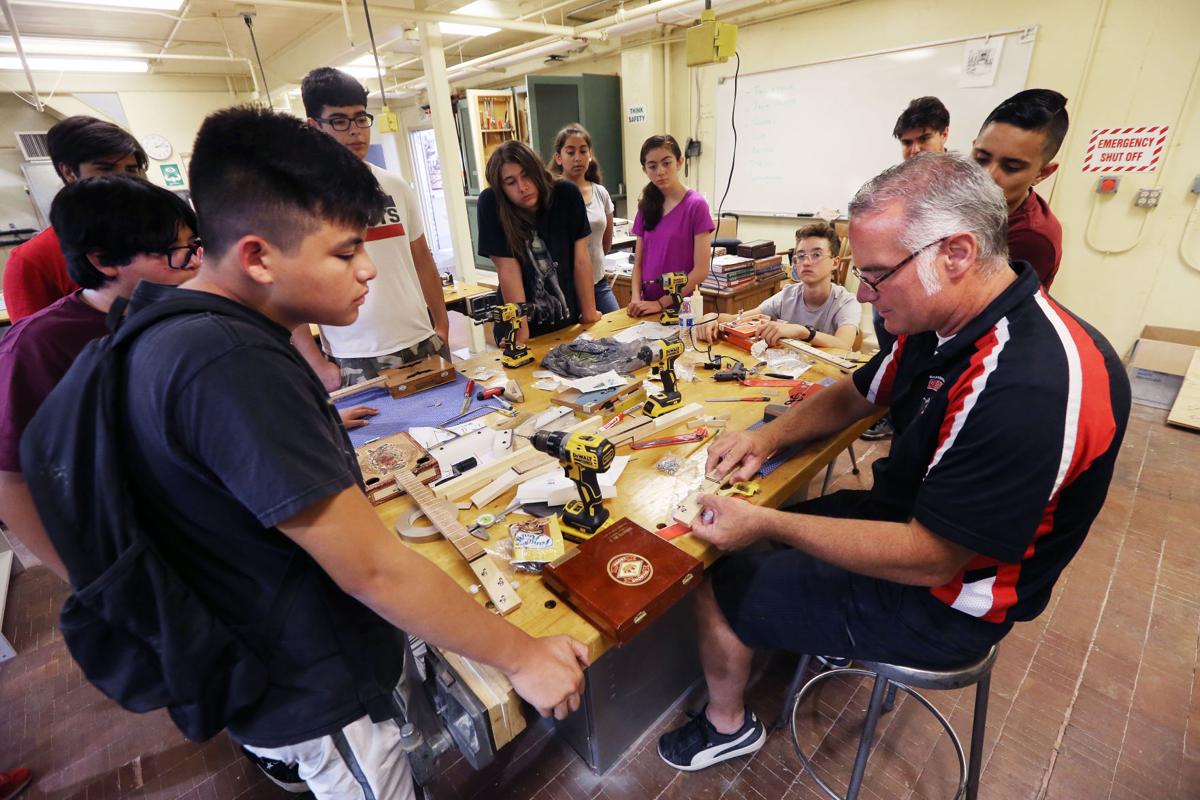 How does one go from the sounds of drills, sanders and saws to the sweet strums of a guitar by using a cigar box and science, technology, engineering and mathematics? High school students at Bakersfield College found out first hand.

For the past two weeks a group of eight high schoolers have worked side-by-side with Klint Rigby, BC industrial technology department chair and professor, to create a three-string guitar as part of the college's Summer STEM Camps program. Thursday was the final day, and Rigby was showing students how to add the finishing touches on their instruments.

Rather than just focusing on assembly, students learn about the STEM aspects to the guitar building process, such as how tuners affect a string's frequency.

"How does tightening the string change the tone?" Rigby asked the group. "When you tighten it, you give it a higher frequency and it gets a higher tone. When you loosen it, you get a lower tone," he explained.

The camps are designed for middle and high school students to engage their STEM interests early on and give them hands-on experiences.

"This is an opportunity to really get a ruler in their hands, figure out actual measurements to get things in the right place, putting them into the computer and cutting," said Martin Perez, program manager of California Career Pathways Trust and engineering.

Around 20 to 25 students are enrolled in typically week-long camps. Between 140 to 160 total students will participate this summer.

In Rigby's class, students, who normally would use a cigar box for storage purposes, built a guitar with one. They crafted different parts of the instrument, such as the neck and sound holes using various tools, all before adding strings to make music.

"Most of these students have never used any tools at all. A few have, but they've never used a saw, screwdriver or drilled a hole," Rigby said. "They're getting real-world application that kids don't seem to get anymore."

Stockdale High School freshman Dennis Marquez said he plays a little bit of the guitar and what interested him most with this camp was he could bring something home that he made and could also play. "It's something new," he added.

"This really grabbed my attention because I like doing creative stuff," said Sandy Rios, a junior at South High School. When Rios was picking out which cigar box she wanted to use for her guitar last week, she picked the one with the most gold detailing, she said.

"I've been to a few camps and they've helped point me in a career path," Gomez said, who has attended drone, solar energy and architecture design camps in previous years. "I definitely want to pursue STEM."

"This gets kids involved in STEM in creative ways that they normally wouldn't have access to on their own," Rigby said.

Perez said he enjoys seeing the excitement students experience when they complete the camps.

"Students can say, 'I designed this spinner in 3D design and I get to take it home,'" he said. "You see with these kids building their guitars that it's theirs and that's the exciting part of it."

Four more camps will be held this summer at BC's main campus, the Delano campus and at the Kern Community College District office. Camps are sponsored by BC's Strong Workforce, Project Lead the Way and Chevron.