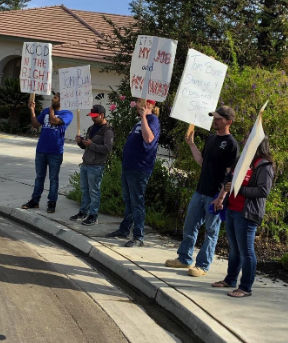 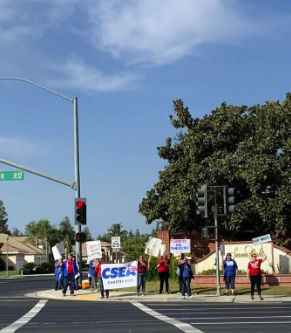 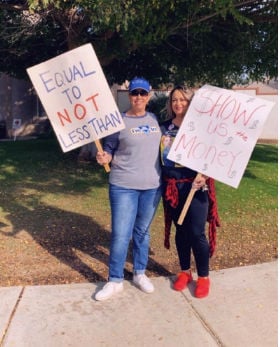 Kern Community College District classified employees from Bakersfield, Cerro Coso and Porterville colleges are fighting for what they say are fair wages after their contract ended 15 months ago, but they feel as though they're getting nowhere.

So they decided to take their frustrations on the road — in front of Chancellor Thomas J. Burke's house, to be exact.

Last Saturday, classified employees and faculty members from the three schools gathered outside the chancellor's residence to let him, and others in the neighborhood, know they've had enough of stalled negotiations.

"What do we want? Fair contract! When do we want it? Right now!" was heard throughout the neighborhood, along with demonstrators wearing buttons and holding signs urging for fair wages.

Although Burke was not home to hear and see it all, California School Employees Association chapter president Tina Johnson hopes it will lead to progress. If not, others could receive a visit from demonstrators in front of their homes soon.

Classified employees have been working under a contract that expired June 2018. As they have tried to negotiate a new one the last seven months, Johnson said district officials have not budged.

The district is proposing a one-time 2.5 percent raise for classified employees. Johnson explained most of those employees earn between $40,000 to $46,000, so the one-time raise would roughly equate to $600.

More than that, Johnson notes district classified employees also make less than their state counterparts. According to data from the California Community Colleges Chancellor's Office, the average statewide salary for classified support staff is $61,095.

Negotiators and employees are advocating for a 4 percent raise, which they think is more fair, but say KCCD individuals are not bending.

"Every time we come to the table, the district says they have no money," Johnson said.

Faculty members, on the other hand, received around a 3.7 percent raise last year and 4.9 percent raise this year, Johnson explained, which makes her —  Johnson has worked for the district for more than 20 years — and other classified employees believe the district does not support them.

"We’re the boots on the ground. We're custodians, food service, clerical people, financial aid techs, we’re the first point of contact with students," Johnson explained. "We get them registered, through the financial aid process, we feed them. Faculty are very important, but if we don’t get them to the classroom, we wouldn’t be able to get them to teach."

Burke and KCCD trustees could not be reached directly for comment, but a statement from the district was provided: “The Kern Community College District (KCCD) is diligently working to negotiate an agreement with CSEA that will be a fair and equitable solution for all involved. Because negotiations are ongoing, comments or statements regarding the issues on the table or the personnel involved will not be made at this time.”

Bernadette Martinez, office supervisor for BC counseling services, said many of her colleagues would be hurt financially if the union's proposed raise is not accepted. With all the services they provide to the district, she doesn't understand why their pleas have fallen on "deaf ears."

"We’re the wheels that make the college move," Martinez said. "They just feel we don’t do enough or we’re not worth it. That's the part that’s hard to grasp."

Union and district employees head back to the negotiating table on Oct. 31. Depending on what happens, another demonstration could take place Nov. 2.

"I think what we’re asking for is fair," Johnson said. "We’re not asking for the moon, just for what we’re doing. Why are we being treated like the step-children?"

I hope they get what they are expecting, not all employee's are treated the same !