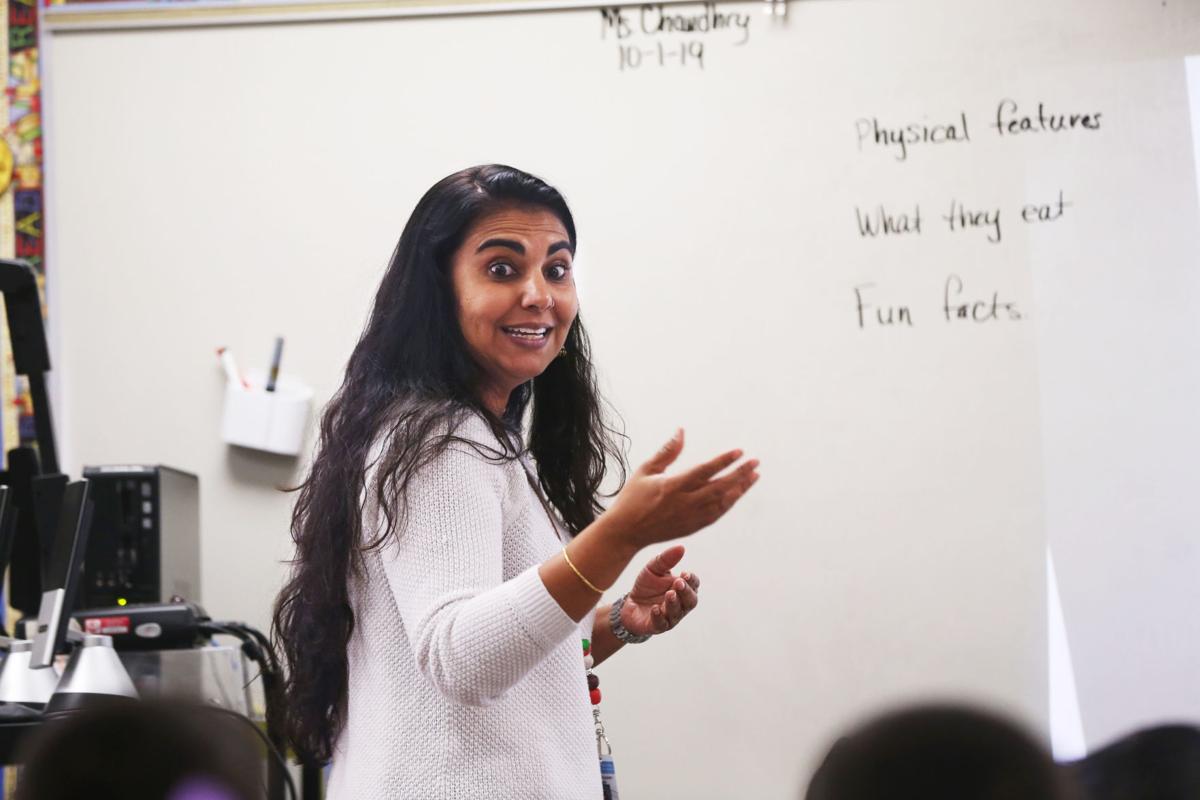 Loudon Elementary teacher Wajeha Chaudhry lectures during a reading comprehension lesson in her classroom on Tuesday. 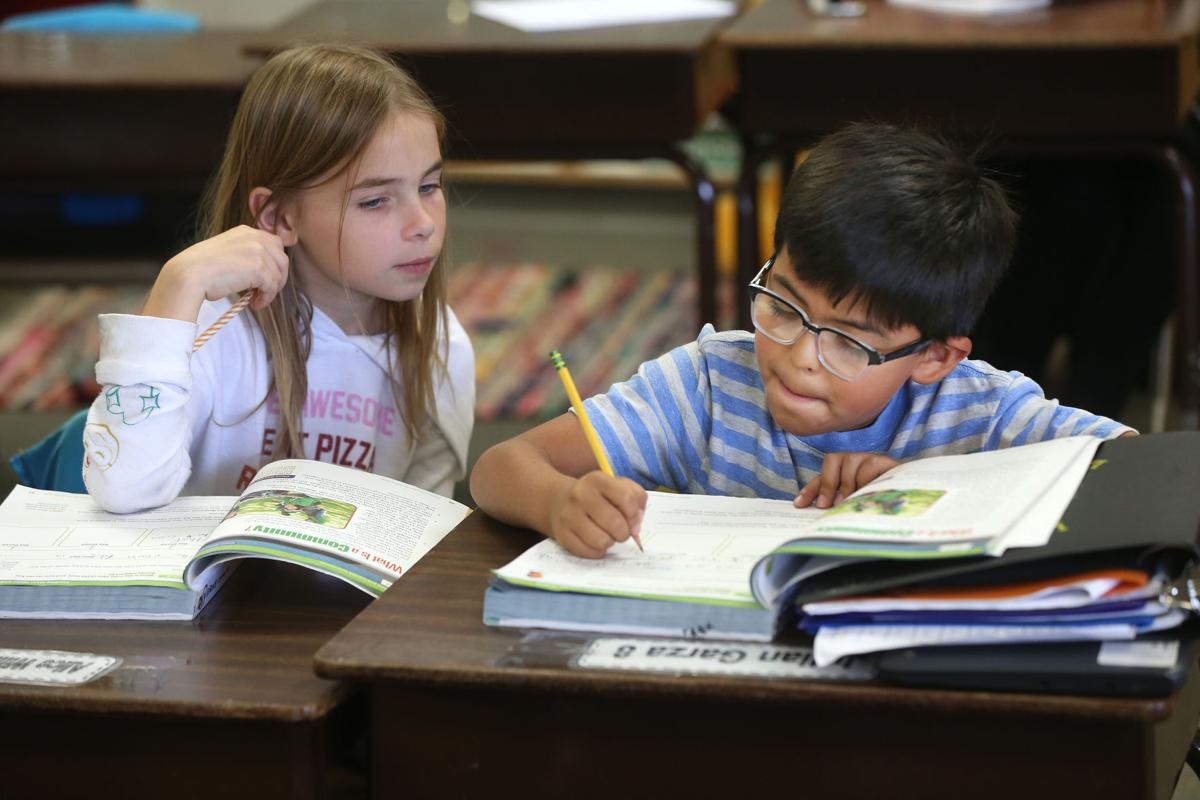 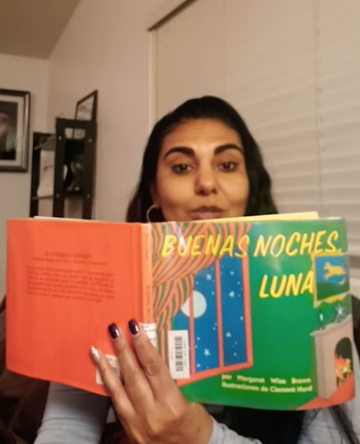 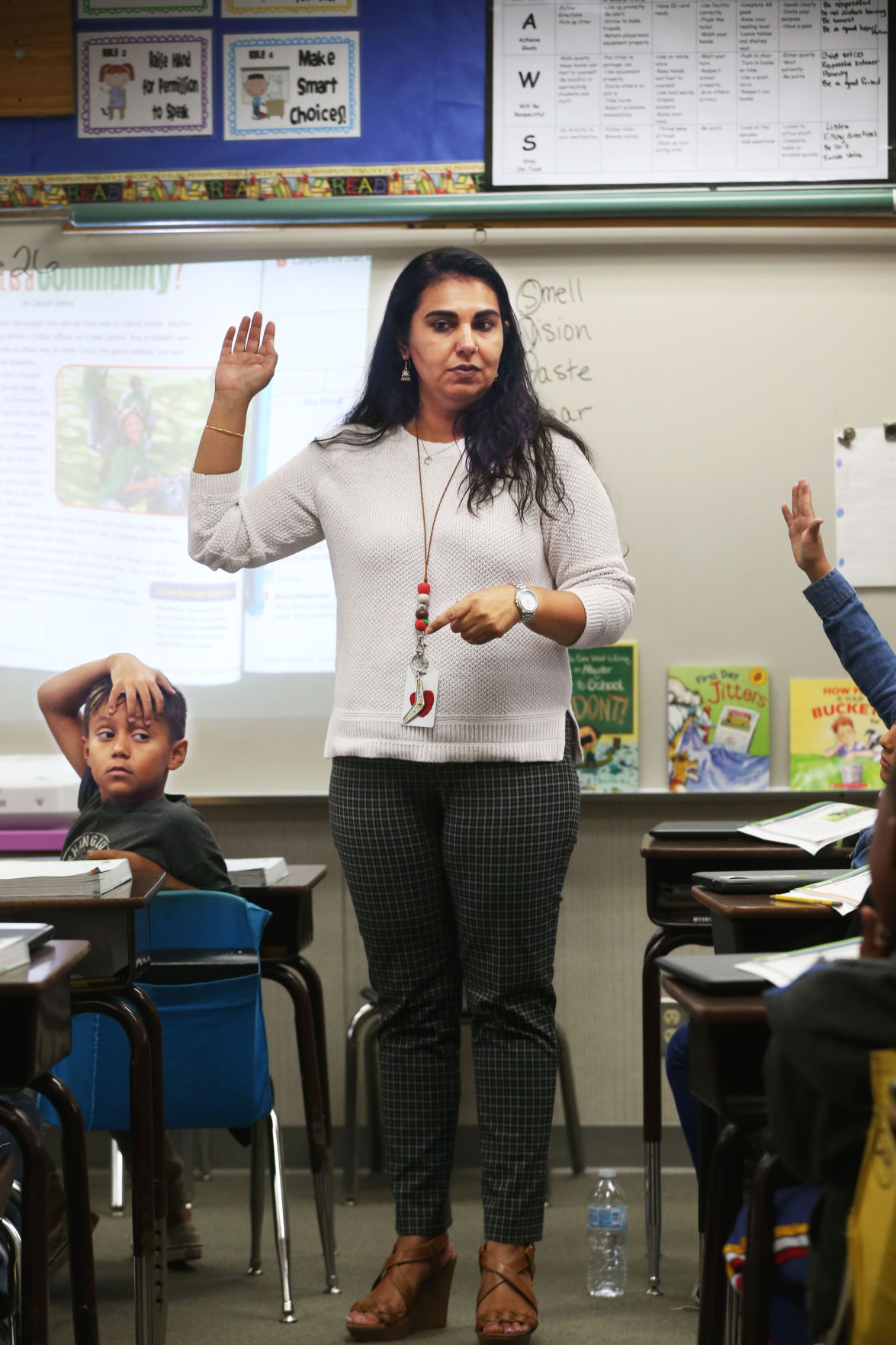 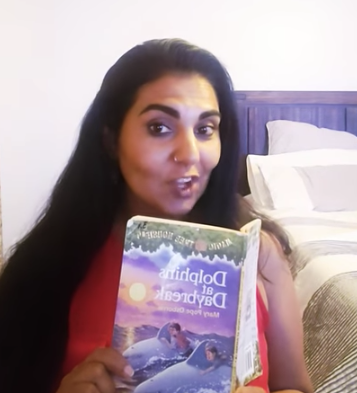 Wajeha Chaudhry reads a chapter from "Dolphins at Daybreak" to students on her YouTube channel. 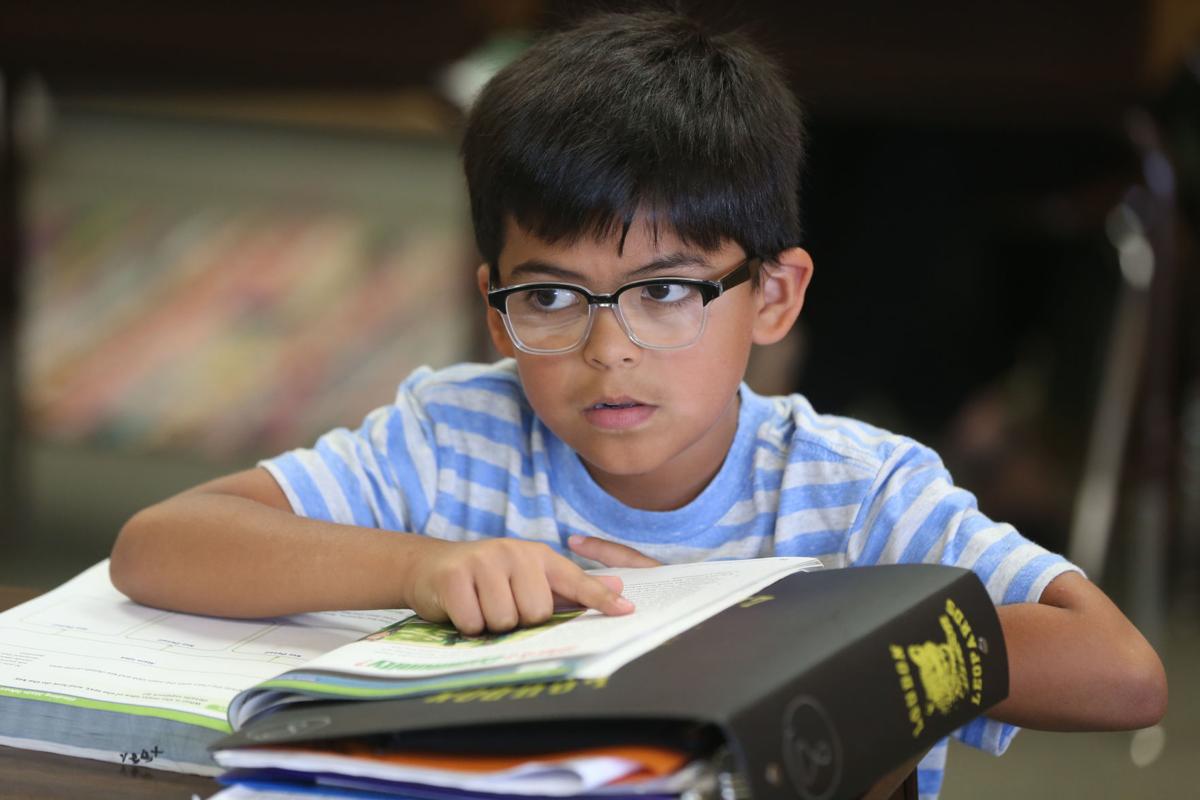 Third grader Julian Garza follows along as Loudon Elementary teacher Wajeha Chaudhry reads during a reading comprehension lesson in her classroom on Tuesday. 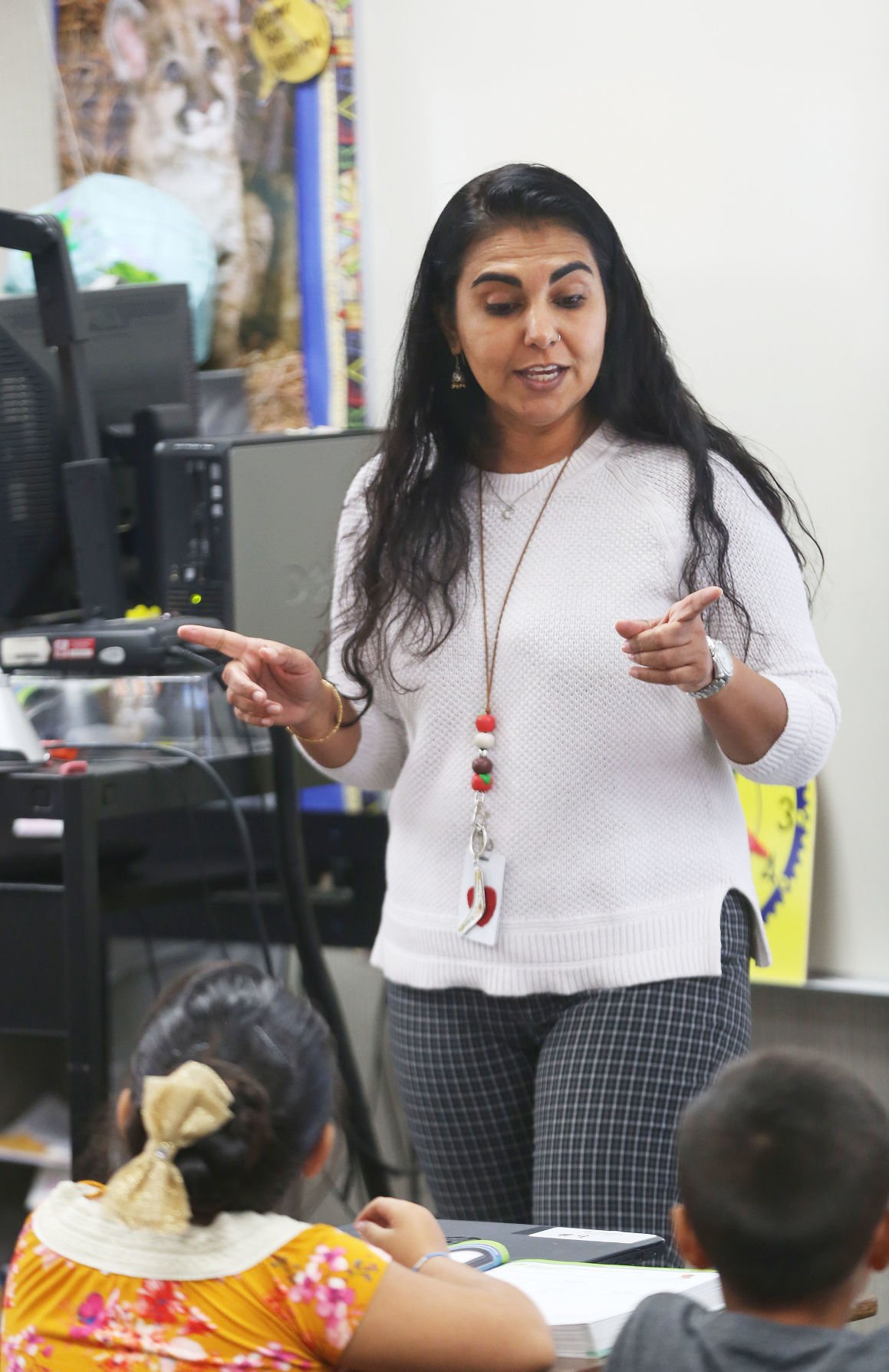 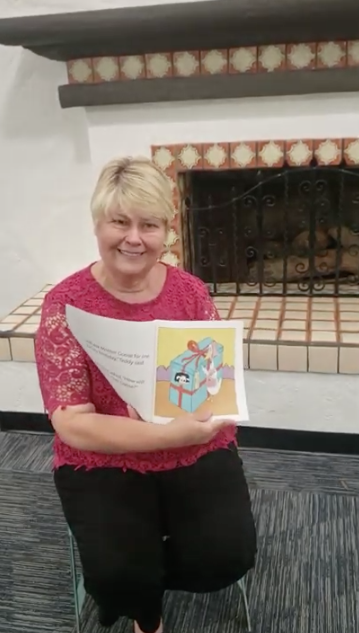 Loudon Elementary teacher Wajeha Chaudhry lectures during a reading comprehension lesson in her classroom on Tuesday.

Wajeha Chaudhry reads a chapter from "Dolphins at Daybreak" to students on her YouTube channel.

Third grader Julian Garza follows along as Loudon Elementary teacher Wajeha Chaudhry reads during a reading comprehension lesson in her classroom on Tuesday.

The meaning of community was the topic of conversation Tuesday in Wajeha Chaudhry's third grade classroom.

Focusing on context clues to help them define new words, her Loudon Elementary students learned a community consists of people living in the same place.

The conversation went further — who helps us in our community? Students one by one voiced their answers: police officers, crossing guards, doctors, trash workers and even the government.

Finally, one student said what was right in front of them the whole time: teachers.

Understanding the difficulties that her students' parents face when it comes to working multiple jobs to make ends meet and not having enough time on their hands, Chaudhry has taken it upon herself to be there for her students outside the classroom — through the power of the internet. She's there to read to her students every night before they go to bed, all thanks to her YouTube channel.

"My thing was to reach every kid," Chaudhry said. "I want every kid to have an opportunity that children who are born into homes where they’re exposed to this naturally have."

Born in Pakistan, Chaudhry understood the value and power of education through her grandparents, who were both professors. After she moved to Bakersfield and attended schools on the east side of town, it was an easy choice to become an educator.

Since joining the Loudon Elementary School team four years ago, Chaudhry has identified challenges her students have with reading.

"Unfortunately I think a lot of times parents aren’t aware. It’s not that they don’t want to, it’s just they’re not aware of how important reading really is and reading to your kids, exposing them to vocabulary, talking to them before they get to school," she said.

But at Loudon, reading "is huge," she explained. There are several programs in place that help students with their specific reading gaps. Chaudhry explained students are pre-screened in order for teachers to know what they need help on, whether it's phonemic awareness, their skill of silent 'E' long vowel patterns or other reading fundamentals.

Though all the work is put in during the school day, it needs to continue at home, but many students are not fortunate to have their parents help. That's when Chaudhry got an idea three years ago to start a YouTube channel.

"What was happening is, I'm teaching math and I have homework with what’s going on in class. Parents are frustrated because it’s taught differently than it was when we were in school," she explained. "I thought, how can I reach parents without having them come in and me teaching a class?"

The response from parents was very positive, she said, and she started wondering how she could expand the channel even more.

After attending a conference, Chaudhry asked her students how many were read to each night.

"Out of the whole class, one or two raised their hands," she said. "I thought, 'I’m going to read to them every night.'"

And so her channel began incorporating readings of chapter and picture books last year. Videos can be found at https://www.youtube.com/channel/UCMm9qykYZuz5kXe0OnifXvQ.

"It helps us with our work," said her student Julian Garza.

His peer, Jared Villegas, said his parents often don't have time to read to him at home since they come home from work late. Since watching the videos, he says his reading has improved and "I understand the work we do in class better."

Almost all of Chaudhry's students watch the videos, as well as many students in other grades and classes at Loudon.

"I envision them sitting in bed, watching before they go to bed. I always wish them a good night, ask them to sleep well and that I’ll see them next time," she said.

She has even asked community members to take part and read to her students. Guests have included her own children, Loudon Principal Stephen Johnson, Bakersfield Police Department officers and Kern County Sheriff's Office deputies.

"I was pulled over by a police officer and said, 'After we’re done with all this, would you like to read for my students?'" she said while laughing.

Chaudhry's tried to make the readings as inclusive as possible. When a Spanish-only speaking mother said her daughter was having problems reading and she could not read to her child, Chaudhry read a few Spanish books on her channel.

"Just because a child is born to parents who don’t speak English or can’t read does not mean they shouldn’t have a read-aloud," she said. She hopes to have stories read in Urdu, Punjabi and other languages as well.

"What she's doing is blending literature and technology in a unique way," said Johnson. He read several "Harry Potter" books to his children growing up, but recognized that "not every kid gets that."

"Our parents are working two jobs, sometimes the kids have responsibilities themselves, so seeing these friendly faces and having the community come together is wonderful," he added.

Results from the California Assessment of Student Performance and Progress show the percentage of third grade students meeting or exceeding standards in English language arts/literacy has increased over the past five years. In 2015, 23 percent of students met or exceeded standards, compared to 68 in 2019.

That's not to say there's a direct correlation between her videos and raising percentages, but they seem to help some students, and that's exactly what she hopes for with her virtual community.

"I’m not giving anybody money, I’m not able to go into each home and help out with other things, but I’m able to read and that’s my one little contribution."

Reading and math videos can be found at https://www.youtube.com/channel/UCMm9qykYZuz5kXe0OnifXvQ

Guest videos are uploaded every Friday

PHOTO GALLERY: Loudon teacher uses the power of technology to read to her students every night before bed

Good idea, (language/communications 'homework') as long as "ASSIMILATION" is the GOAL . . . ! Gotta ask though . . . why'd ya leave your home country of birth and its culture? Do you intend to bring to America those "romantic virtues" as well as the problems you fled for sanctuary . . . ?

If you can't find time for your children don't have them.

She is the embodiment of the phrase: Be the teacher you needed growing up. God bless this wonderful educator