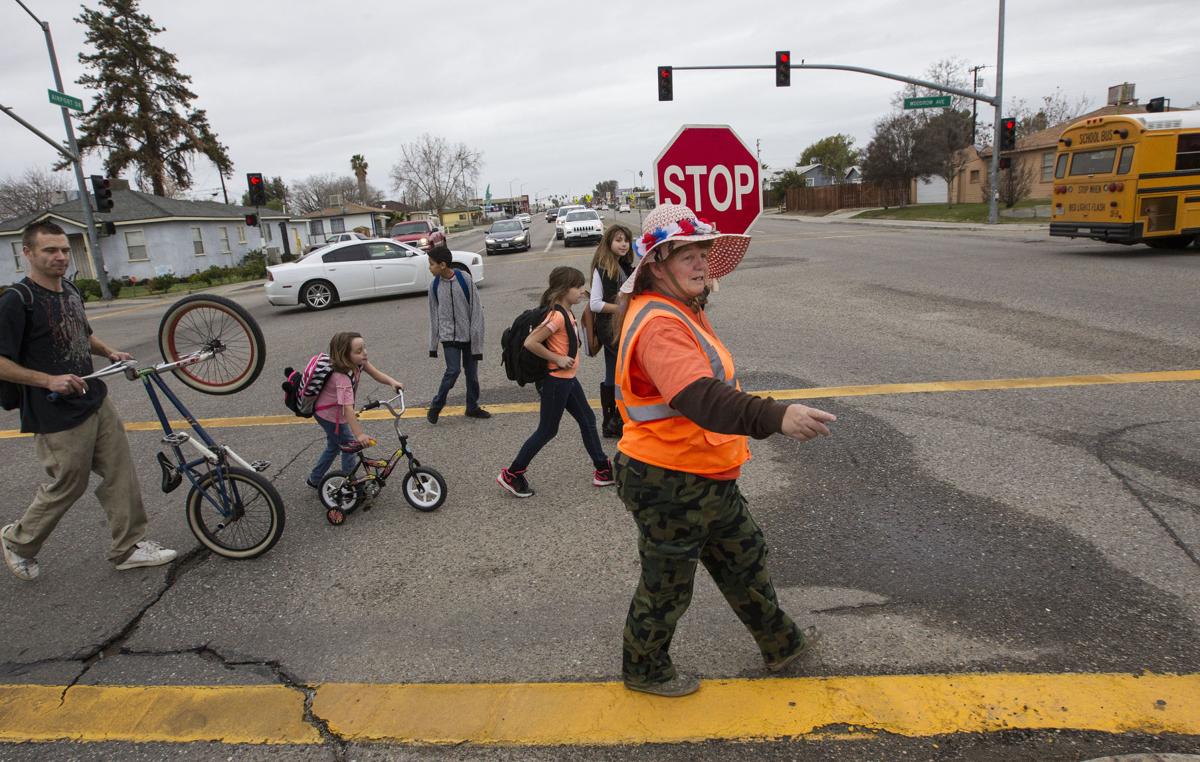 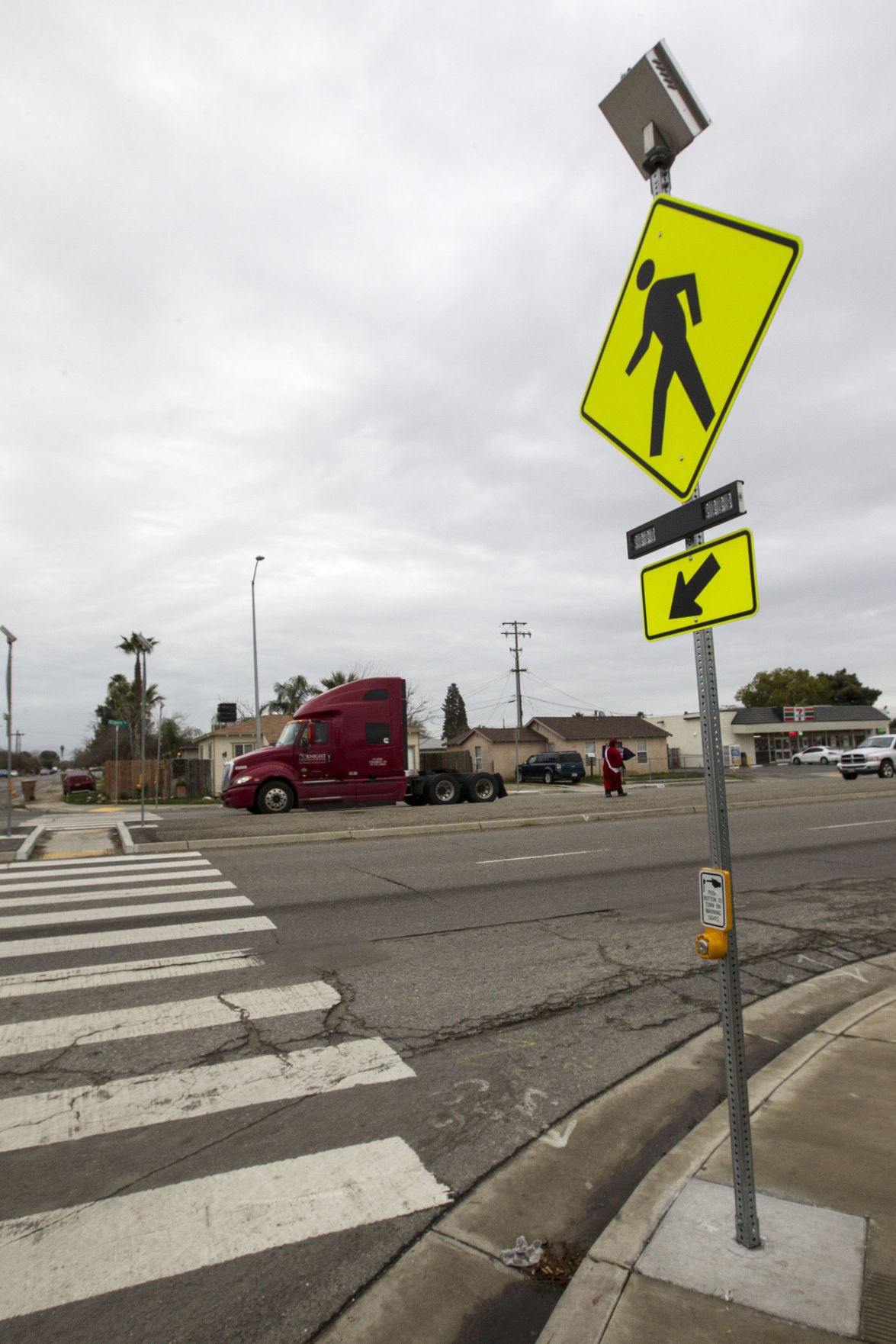 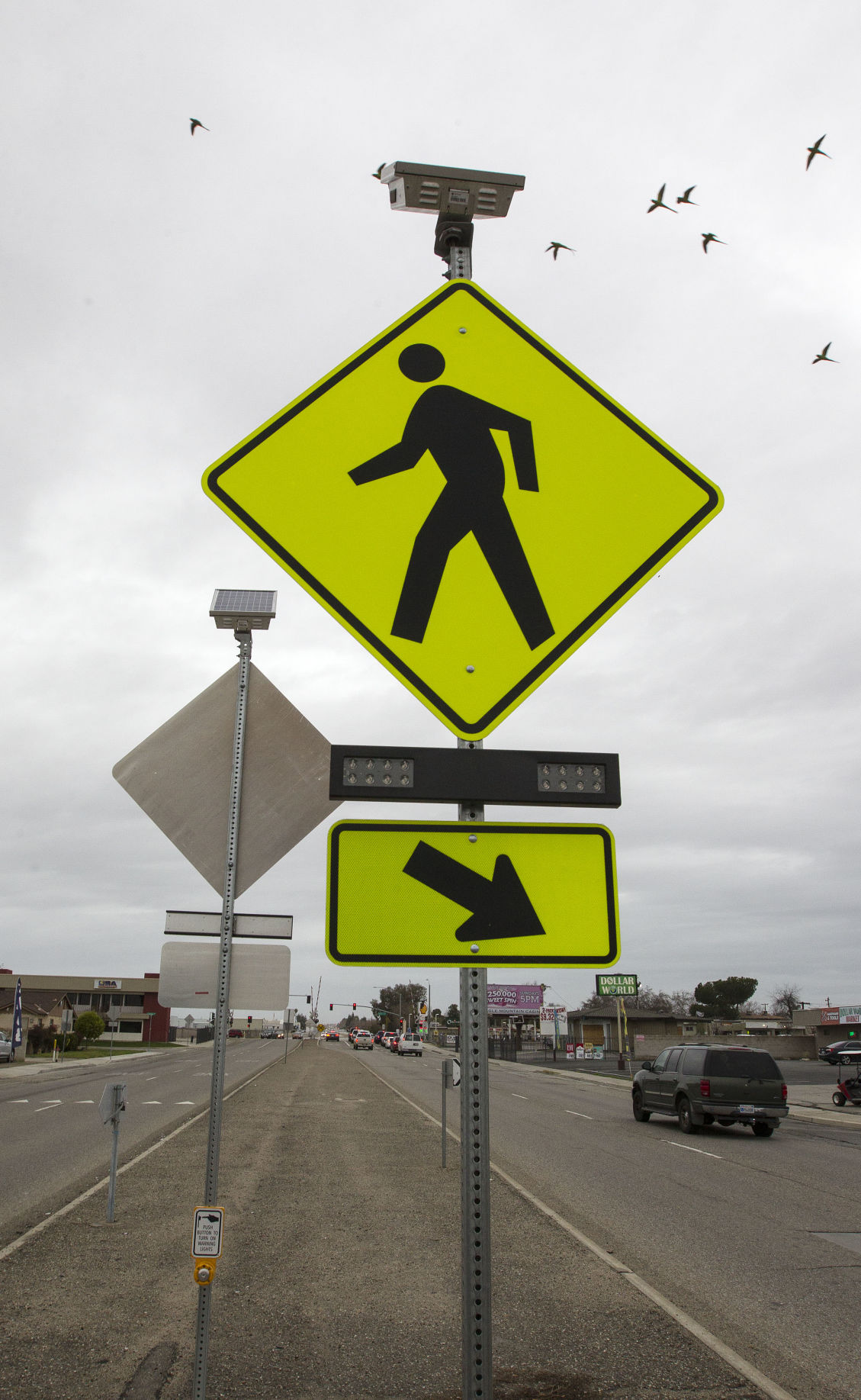 Flashing light signs were installed at this crosswalk on Airport Drive to enhance the safety of pedestrians.

Flashing light signs were installed at this crosswalk on Airport Drive to enhance the safety of pedestrians.

If you're planning a leisurely walk in Bakersfield this evening, you might want to wear a beanie topped with a blinking red light.

According to a study released Tuesday, Bakersfield is the seventh most dangerous metro area in the nation to be a pedestrian.

And it's the only California city to make the top-25.

The study by a group called Smart Growth America analyzed data from 2008 to 2017, drawn from a number of government sources to calculate what the authors call the Pedestrian Danger Index. The index makes it possible to compare pedestrian safety in cities of different size, density, and rates of walking.

This is why a densely populated metro area like New York-Newark-Jersey City can record higher numbers of pedestrian deaths, but because it has a much larger population and higher rates of walking than elsewhere, its index is lower. The eastern metropolis was rated 93rd most dangerous by study authors.

"The bottom line is we are killing more people walking," said Emiko Atherton, director of the National Complete Streets Coalition, a program of Smart Growth America.

Ironically, the national numbers of fatalities for motorists have been encouraging.

From 2008 to 2017, miles traveled by vehicles in the United States increased by about 8 percent, yet during that same period, traffic deaths among motor vehicle occupants decreased by about 6 percent. By any measure, that's good news.

But even as traffic deaths were decreasing, pedestrian deaths on U.S. roadways were increasing — by an alarming 35.4 percent.

According to the report, the Bakersfield metro area recorded 247 pedestrian deaths from 2008 to 2017. That calculates to 2.83 annual pedestrian fatalities per 100,000 population.

Many places still lack the most basic safe infrastructure for walking, the study found. For example, crosswalks, if they exist at all, are often spaced so far apart as to be impractical, or don’t provide enough time for some adults to safely cross.

Unnecessarily wide lanes encourage high speeds — a major factor in the likelihood of surviving a collision — and many streets are designed with wide turning lanes that allow cars to make right turns through crosswalks at high speeds.

The report also finds that certain groups of people bear a disproportionate share of this burden, especially African American people, older adults, and people who live and walk in low-income communities.

From 2008 through 2017, black Americans were 72 percent more likely to have been hit and killed by a driver than people of other races, said Charles P. Brown, a researcher at Rutgers University’s Alan M. Voorhees Transportation Center.

"The incomes of people who are struck and killed are not recorded," Brown said, but lower income neighborhoods saw a higher share of pedestrian deaths than middle-class or upscale neighborhoods.

Dr. Stacy L. Dorris, founder of the Nashville Pedestrian Death Registry and an assistant professor of pediatrics at Vanderbilt University, said news reports on pedestrian deaths tend to note that the deceased was wearing dark clothing or was walking outside a crosswalk — or both.

But many residents of lower-income areas have to walk to get around, and the wide arterial streets are often not conducive to safety for pedestrians.

We may choose to not walk a quarter-mile out of our way just to get across at a wide street at the light, she said.

Indeed, according to an interactive map that shows the locations of pedestrian deaths in the Bakersfield area, several incidents occurred on Union Avenue, a low-income area where crosswalks are spread apart, motorists drive fast and pedestrians are fairly numerous.

The map also shows many more pedestrian deaths in metro Bakersfield occur east of Highway 99 than west of the freeway.

The city of Bakersfield and local groups have been working at reducing the number of pedestrians who are killed or seriously injured in traffic accidents. Improving and creating more crosswalks — including a lighted crosswalk on Airport Drive — and educating pedestrians and drivers on the rules of the road are just some efforts officials hope will help reduce pedestrian deaths.

Pedestrians and bicyclists were at fault in 73 percent of accidents in 2014-17 that resulted in deaths to either a pedestrian or bicyclist, according to the city's Bicycle & Pedestrian Safety Report.

Most of the deaths occurred because of failure to yield to vehicles in areas without a crosswalk, the report said.

But the authors of Tuesday's study say it's often more complicated than that.

Carolyn Grawi, executive director of the Center for Independent Living Disability Resource Center in Pensacola, Fla., has spent more than 30 years advocating for making streets safer for people with disabilities. Grawi was hit in a crosswalk last month by the driver of an SUV who was turning right on a red.

“Being struck by this driver was one of the scariest experiences of my life," she said in a news release. "I did everything right (backed up by a police report), yet I still ended up in the emergency room with a concussion and staples in my head...

"I never thought I would become a survivor myself, illustrating how, when streets are built to prioritize cars and people are just a tertiary concern, small mistakes can become deadly for people walking. We can and should do better for the safety of everyone."

10 most dangerous areas for peds