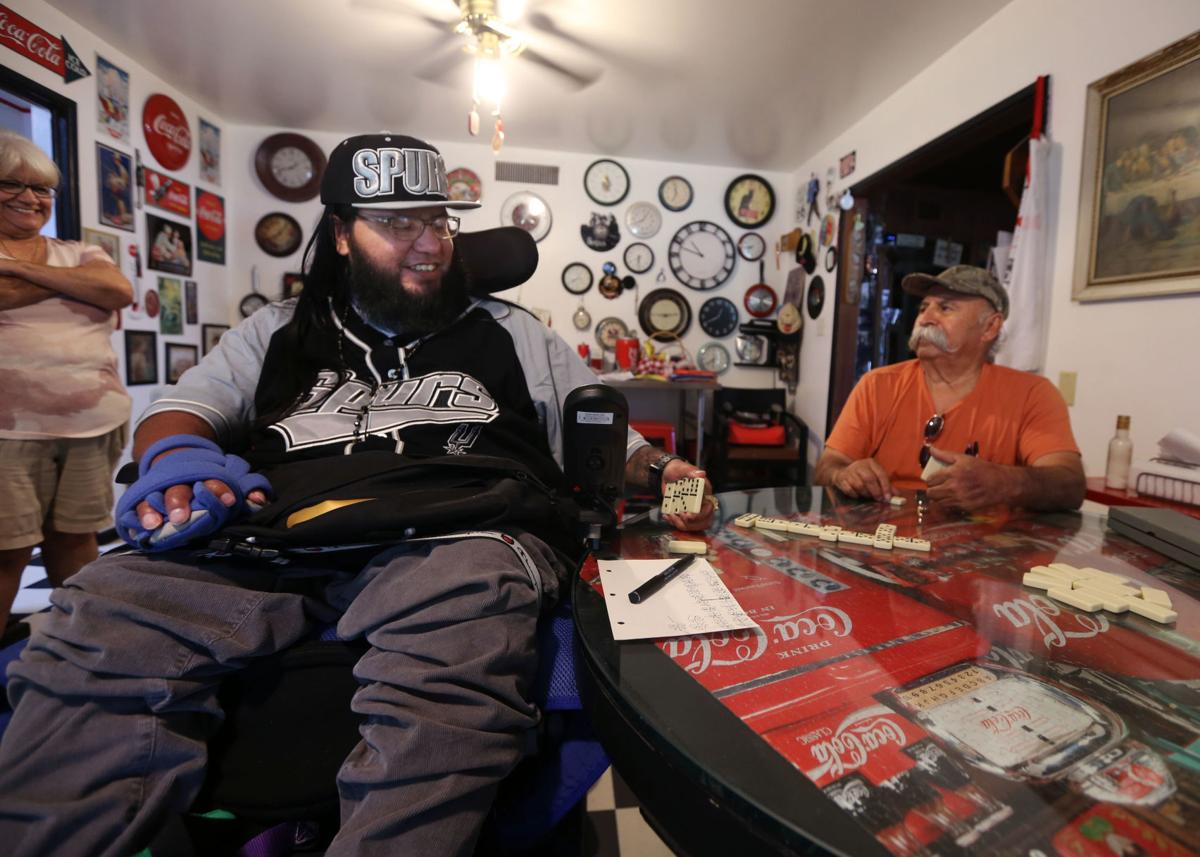 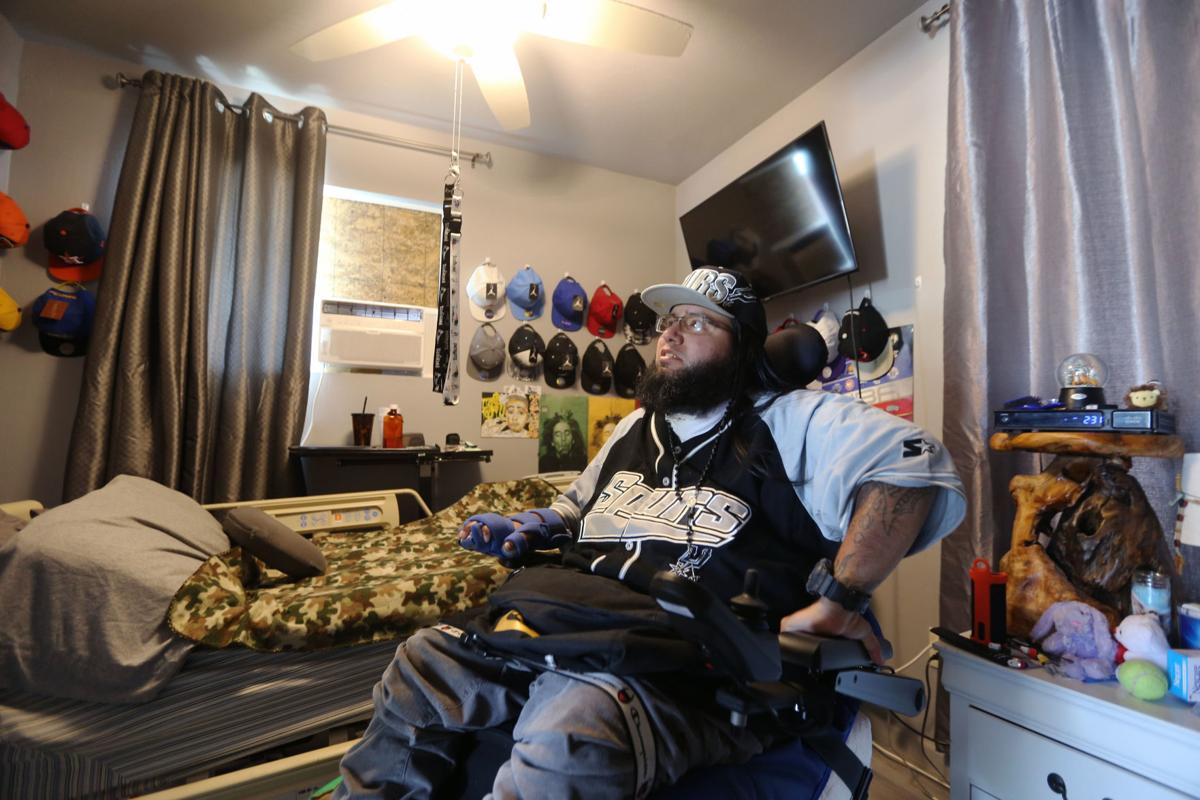 High school graduation has been a long time coming for Jacob Emilio Beltran, 26. Not because he slacked off all these years, but because four years ago, he was shot three times in the back. He lost one of his lungs and became paralyzed after the incident. The last four years have been tough for this young man: he had to relearn how to breathe without a machine, how to talk and how to write with his left hand. He pushed himself to the limit, and now he's about to graduate from Bakersfield Adult School and head to Bakersfield College. 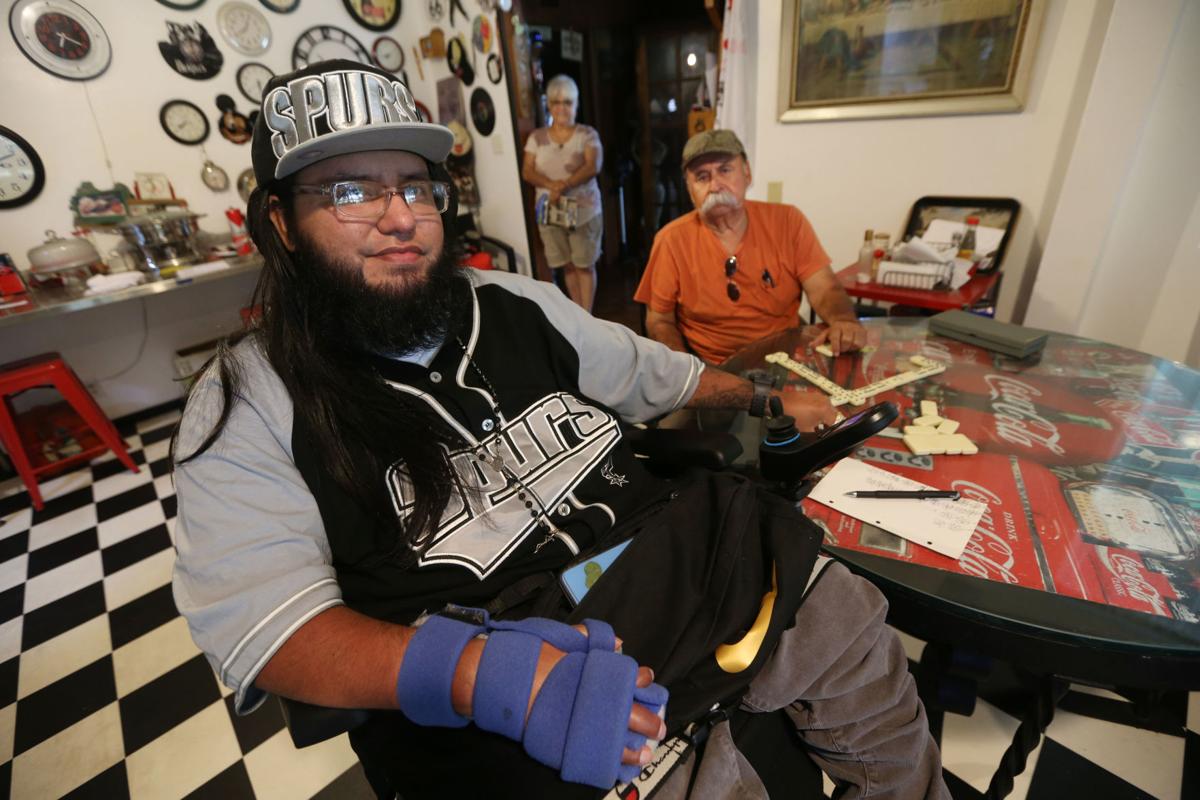 Jacob Emilio Beltran ives with his grandparents, Christine and Ben Gomez. Four years ago, in a random act of violence, Beltran was shot three times in the back, leaving him paralyzed and with one lung. The years that followed consisted of relearning how to breathe on his own, talk and write. Through it all, he continued to push himself, and is graduating with his high school diploma. 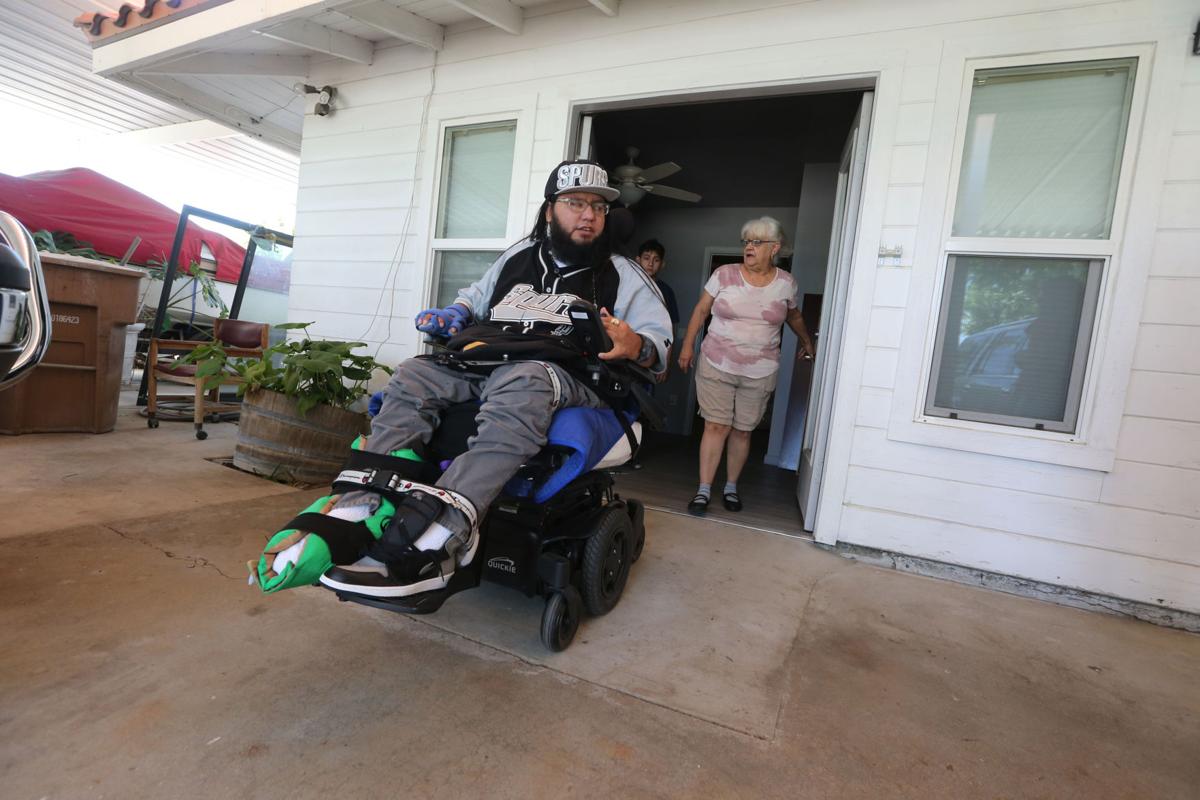 Jacob Emilio Beltran, forward, exits his bedroom. He lives with his grandparents, Christine and Ben Gomez.

High school graduation has been a long time coming for Jacob Emilio Beltran, 26. Not because he slacked off all these years, but because four years ago, he was shot three times in the back. He lost one of his lungs and became paralyzed after the incident. The last four years have been tough for this young man: he had to relearn how to breathe without a machine, how to talk and how to write with his left hand. He pushed himself to the limit, and now he's about to graduate from Bakersfield Adult School and head to Bakersfield College.

Jacob Emilio Beltran ives with his grandparents, Christine and Ben Gomez. Four years ago, in a random act of violence, Beltran was shot three times in the back, leaving him paralyzed and with one lung. The years that followed consisted of relearning how to breathe on his own, talk and write. Through it all, he continued to push himself, and is graduating with his high school diploma.

Jacob Emilio Beltran, forward, exits his bedroom. He lives with his grandparents, Christine and Ben Gomez.

When Jacob Emilio Beltran thinks about his high school self, it's hard to believe it's the same person.

Sure, both enjoy painting and showing off an endless collection of sports hats and jerseys. But the way he values education has completely changed.

Six years ago, Beltran cared more about earning money than studying for a math test. Today, the high school diploma he will soon receive is his ticket to a better, brighter future.

"It felt like something that had to be done, and now I've accomplished it," he said.

But the journey to graduation was nothing short of a "roller coaster" for the 26-year-old.

Four years ago, he was a victim in a random act of violence, leaving him paralyzed and without a lung.

In the years since, Beltran has had to relearn how to breathe on his own, talk and write with his left hand. Despite the countless surgeries, hospital stays and tough days, holding a high school diploma in his hands never escaped his mind.

Beltran, a Bakersfield native, didn't have a good relationship with school. He switched between Mira Monte, North and Vista high schools and Bakersfield Adult School, and when he'd build up motivation to go, he'd usually get bored and give up a week later.

When he was 20 years old, he decided to leave school for good.

"I was more or less confused about education," he said. "I'd think to myself, 'Eh, I don’t really have to do this.'"

His independent study teacher at Bakersfield Adult School, Laurel Britton, said Beltran was always "academically able." When he quit school, he only had a few outstanding credits.

When he was 22, his life changed completely.

He doesn't remember too much from the incident, but recalls picking up pizza late one night near Niles Street when he had an encounter with an unidentified individual, who tried to take the pizza away. As Beltran ran away, he couldn't escape danger.

Three bullets punctured one of Beltran's lungs and severed his spine.

"I was considered dead at the scene," Beltran explained.

Doctors at Kern Medical revived him, and he underwent surgery to take out pieces of scrap metal from his stomach and chest. To this day, bullets are still in Beltran's spine, and he doesn't know who attacked him.

His grandmother, Christine Gomez, remembers getting a knock on the door from one of Beltran's friends late at night to share the news, and she and her husband, Ben, rushing to the hospital.

The doctor said damage to Beltran's spine was irreversible; he would be paralyzed from the nipples down the rest of his life.

"It was devastating," Christine Gomez said.

Beltran was in a coma for several weeks before he found out the news. Along with his paralysis, Beltran was ventilator-dependent and unable to talk.

During that time, some skills people take for granted — breathing, talking and writing — he had to relearn.

When he came out of his coma, words seemed stuck in Beltran's head.

"It was like you know what you’re trying to say, but nothing is coming out of your mouth," he said. "I would say the beginning of the letter and it would cut out."

At first he'd communicate by blinking — one blink for yes, two for no. He would also try to mouth letters, but often times gave up, leading to more frustrations. With time, the sounds came back.

Breathing was another struggle. With one lung damaged, Beltran depended on his trach and ventilator to get enough air in. When he tried to breathe on his own, it felt like "drowning." He even got used to fainting.

He was filled with frustration, depression and anger.

During his two-year stay at Sierracare at the Lake, a subacute care facility in Tulare County for patients suffering medically complex injuries, Shannon Rojas, a licensed vocational nurse, encouraged him to take control.

When Beltran first entered the facility, Rojas said, he was "full of anger" and not always the nicest. He also couldn't cough out secretions on his own or wean himself off respiratory services.

"He wasn’t accepting of his new condition and the way life would be for him," she said.

Rojas and fellow staff members tried to show Beltran they were there to support him, and after time, she noticed change.

"I would tell him all the time, 'Prove me wrong, prove everyone wrong, show me you can do it,'" Rojas said.

Sure enough, he learned to do it on his own.

As Beltran healed, he gained strength and movement in his arms. His right hand, however, was severely damaged from a shoulder operation, and couldn't be used.

An artist will tell you how valuable their hands are to their entire being. The 26-year-old always enjoyed art — drawing animals, mythical beings and celebrities with pencils or acrylic paints.

Turning to the creative outlet "makes me happy and gives me a sense of accomplishment," he explained. It also reminds him of his older brother, a talented artist of his own who died a few years ago from leukemia.

Rather than give that love away, Beltran learned how to use his left hand.

"I surprise myself sometimes," he said. "I'm just blown away with what I can do."

He thinks his artistry is even better with his left hand because he takes his time. Some recent works include koi fish, a portrait of his father, and a scary-identical take on the sculpture of Perseus holding the head of Medusa.

Being home with his grandparents also has allowed for more stability and time with loved ones. Almost daily there's a game of dominos going on with grandfather Ben, or gin rummy with grandmother Christine.

"When he beats me, I can't wait to go again," Ben said. Though there's trash-talking and sabotage involved, the time spent together is full of love.

Beltran's siblings — Gabriel, Xandria and Olivia — also help him get ready each day and with small tasks around the house.

"If I didn’t have my family, I don’t think I would have been able to get through it all," Beltran said. "I can see that for people who don’t have family — it’s a lot harder for them."

There was one more thing to cross off the list once he was home: graduating with his high school diploma.

Beltran had about five credits left, and with a desire to finish and get out of the house more, he returned to Bakersfield Adult School.

This time around, "I enjoyed going to school, having my book on me, turning in my work," he said. The lowest score he received in his child development class was a B-minus.

"You can’t give up on people," said Britton, who worked with Beltran again this year. "He didn’t dictate the work, he did it himself. I might not have had the patience myself."

When he completed his program in February, Christine Gomez said Beltran sent her a picture of him in his cap and gown. "I did it, Grandma. I’m going to cross stage," he said.

"He mentally wanted to do it and not give up," she said with pride.

This was all before the coronavirus pandemic forced the closure of Kern High School District schools. On Wednesday, the board of trustees approved holding scaled-down graduation ceremonies for all of the district's comprehensive and continuation schools for late June. Bakersfield Adult School plans to hold its graduation in the fall.

Beltran will attend Bakersfield College either in the summer or fall, but he's still undecided on his major. He has a few options in mind — art and business — and eventually he'd like to become a motivational speaker and inspire others going through struggle.

"Life is very precious, and you have to make the most of it," he said. "I’m proud that I'm so focused on the positive outlook on life and sticking to those goals and accomplishing them."

WONDERFUL story, and good for him! As the Vulcan in the Star Trek series said "Live long and prosper". He has realized that he too can overcome adversities, which so many don't, and then give up.

Where did this awful suffering happen? could not be in America because America is advanced and civilized.

It shows how if one is determined, you can accomplish almost anything. He's a great example for others who simply complain about everything, have grievances, and accomplish nothing

This was a good story. But why no mention of his parents? I have a guess, but I'll keep it to myself.