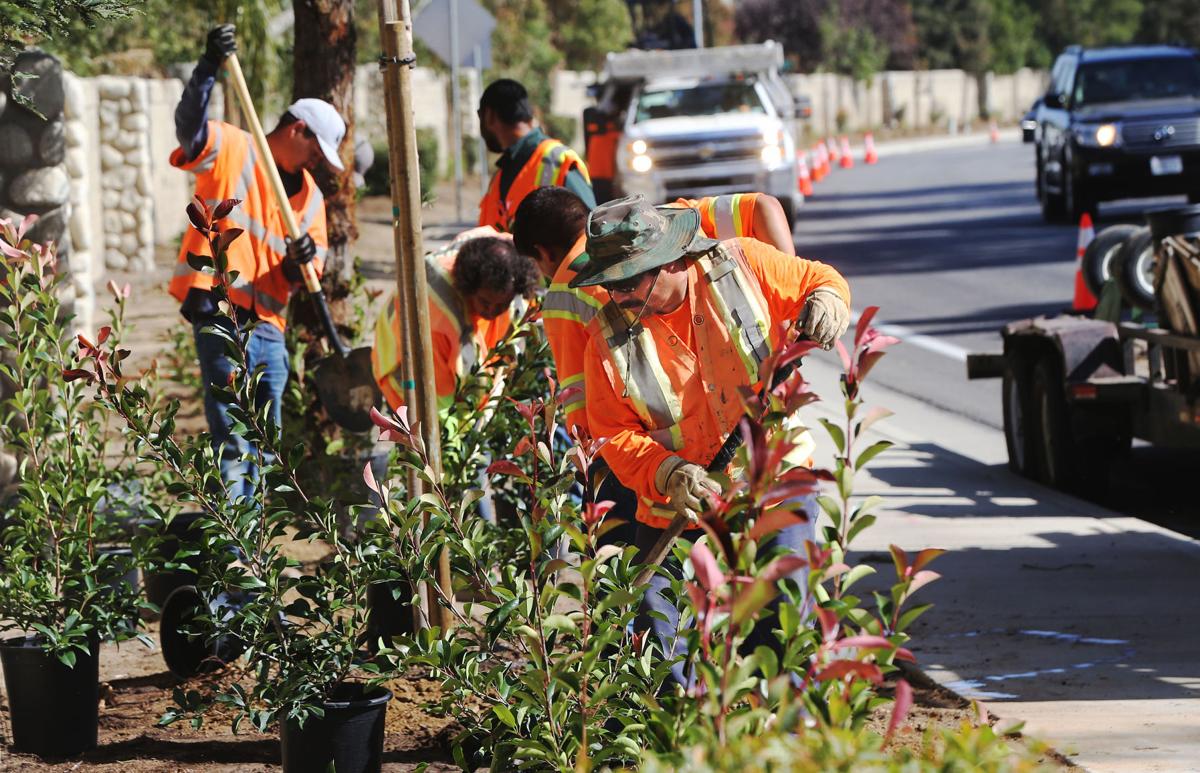 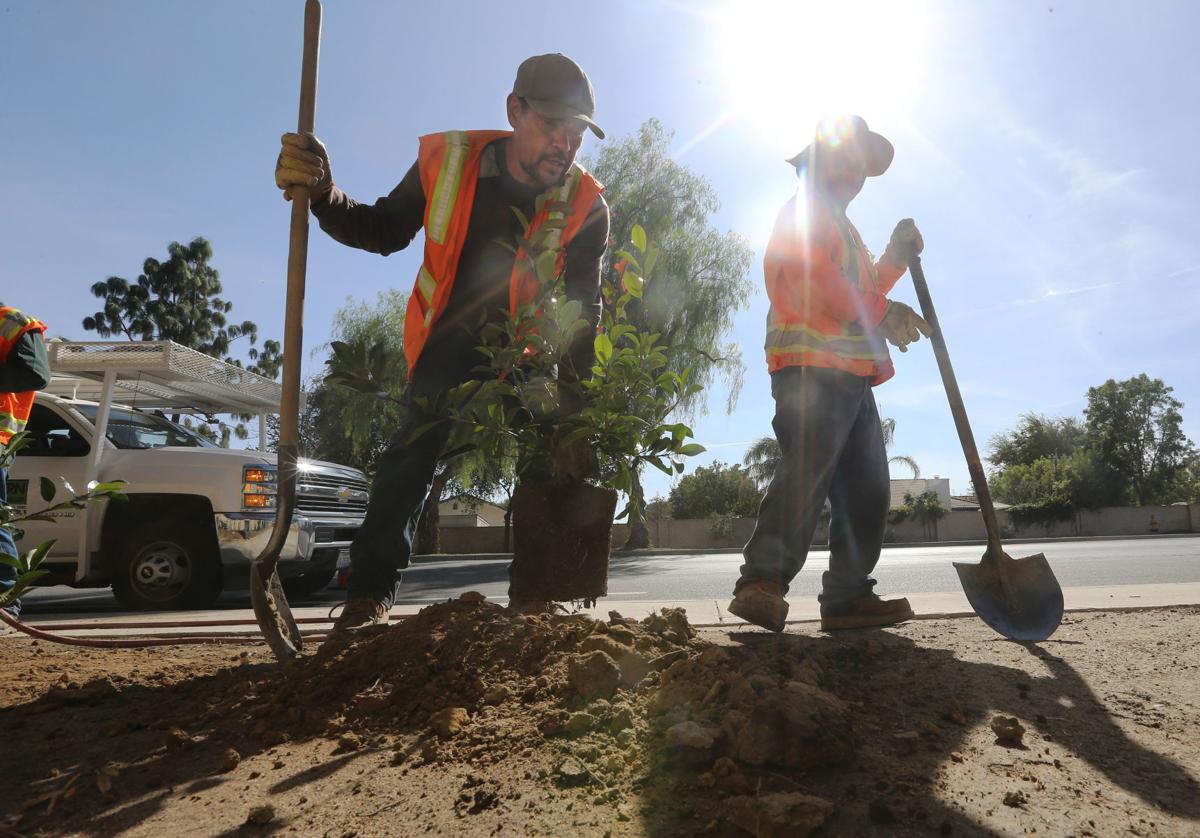 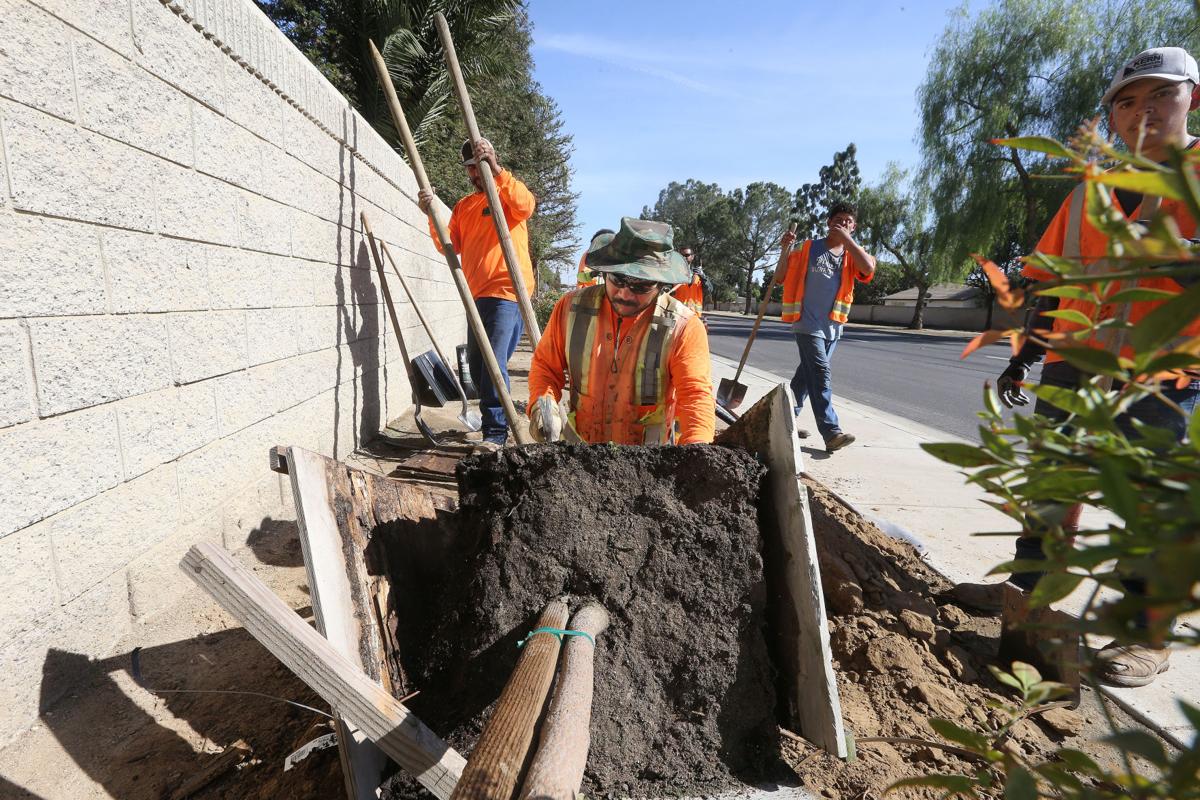 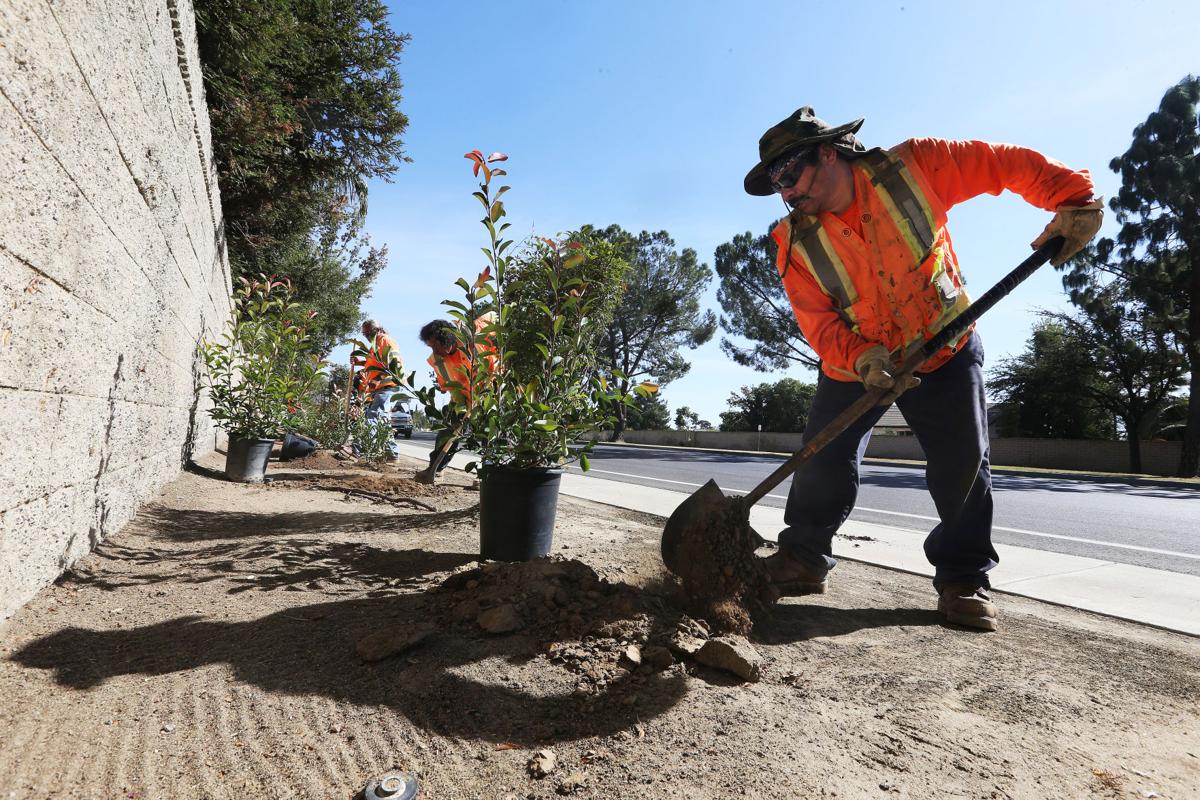 Bakersfield is planting 3,550 trees and 32,100 shrubs in the coming months. Jesus Jimenez a employee of Kern Sprinkler Landscaping Inc. was planting shrubs on Olive Drive near Baytree Way Thursday afternoon. 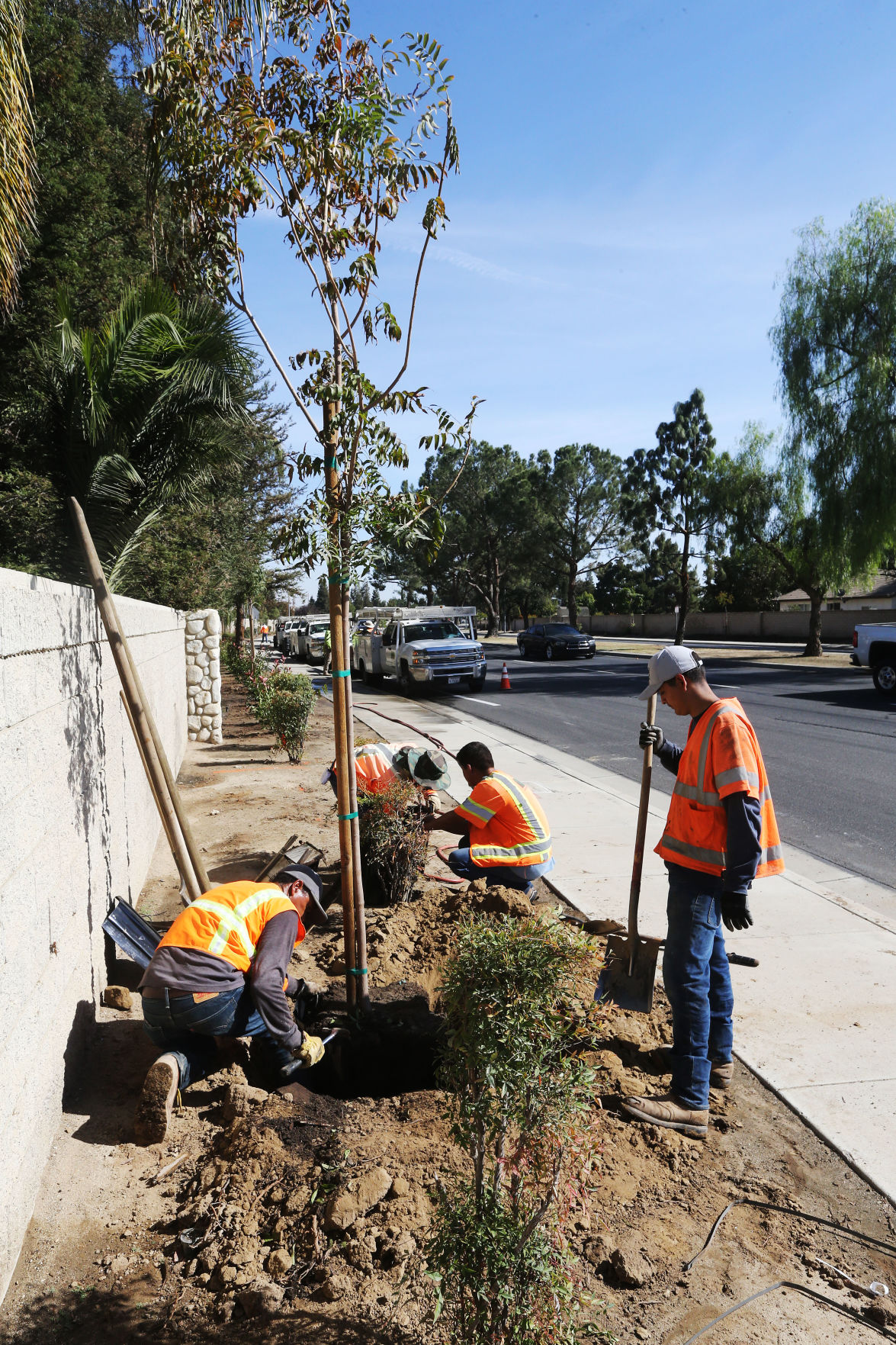 Bakersfield is planting 3,550 trees and 32,100 shrubs in the coming months. Jesus Jimenez a employee of Kern Sprinkler Landscaping Inc. was planting shrubs on Olive Drive near Baytree Way Thursday afternoon.

A massive effort is underway to plant tens of thousands of trees and shrubs throughout Bakersfield as part of the city’s effort to beautify areas of town devastated by the drought.

Beginning this week, contractors for the city of Bakersfield began work on the city’s $1.5 million effort to plant 3,550 trees and 32,100 shrubs along the city’s roadways.

The plan dwarfs the city’s previous efforts to replace greenery that died during the drought and were not replaced due to budget restrictions. In prior years, around 100 to 150 trees have been planted.

“This is bigger than we’ve ever done,” said Bakersfield Recreation and Parks Director Dianne Hoover.

“Even when we were bidding this, a couple nurseries were asking if our numbers were correct,” he said.

Those nurseries, which grow the plants the city hopes to spread around Bakersfield, thought the Recreation and Parks Department might have added an extra zero onto the end of their requests.

But that wasn’t the case. The city really did need 6,000 Texas privets and 5,000 red-leaf photinias.

“In order to get those, we need to search several states wide,” Hoover said.

The contractors are expected to work every day for the next six months to bring the city’s plan to reality.

Only areas that were impacted by the drought will be restored. However, those areas are spread everywhere throughout Bakersfield, especially the southwest.

Due to budget restrictions during the drought, which began in Bakersfield around 2008, some plants that died were not replaced.

He praised the city’s new efforts, which are funded through the one percent sales tax increase known as the Public Safety / Vital Services Measure.

“It’s really in the neighborhoods,” he said of the new planting. “It’s really localized.”

The city hopes the new foliage will show the general public its tax dollars are being spent well.

“We want to show people that they’re getting their bang for their buck,” City Spokesperson Joe Conroy said.

After the city completes its planting efforts, it will return to its normal rate of replacing dead plants like it did before the drought.

Let the shrubs alone. Feed the homeless. Or at least put them to work on the greenery!

Are these drought tolerant plants and/or zeroscape and native plants?

I looked it up and they’re considered “drought tolerant.”

Great news to hear. I’m glad to see our city leaders are being so proactive in addressing quality of life issues, even if it’s the things we tend to overlook. Trees and shrubs are important to the environment and should be replaced

I would say this is good news. Let's embrace it. Positive direction is good.

IT would be nice if the city took better care of the plants that are currently alive. Our "maintenance districts" are not run well at all. The city crews nearly hack all the shrubs to death; pruning them back to the bare wood. Grass is mowed haphazardly and NEVER edged. Dead spots are everywhere because broken sprinklers are EVERYWHERE. Who breaks them? The city maintenance crews break them while they mow the grass. When the Westside parkway overpass was built on Calloway Drive, 30-40 trees and about 100 shrubs that lined the Calloway Drive median and aprons were removed. We were told at that time the trees and shrubs would be replaced when the freeway was completed. Freeway was completed 8 years ago and still no trees or shrubs; just some old ratty artificial turf that the city threw in on the medians. Also, the weeds on Westside parkway are horrendous as is the case on all the city's freeways. Meanwhile all the city employees keep getting their pay, benefits, vacation and retirement. Sad and embarrassing.

I agree with you that I often see too many broken sprinklers in the median of major streets that are just wasting water. As far as the Westside Parkway is concerned, I believe CalTrans takes over that once the connection from 58 is complete. So the city shouldn’t spend any money on the Parkway.

Were the sprinklers turned off during the (last) drought . . . ?

This is good! Surprised!