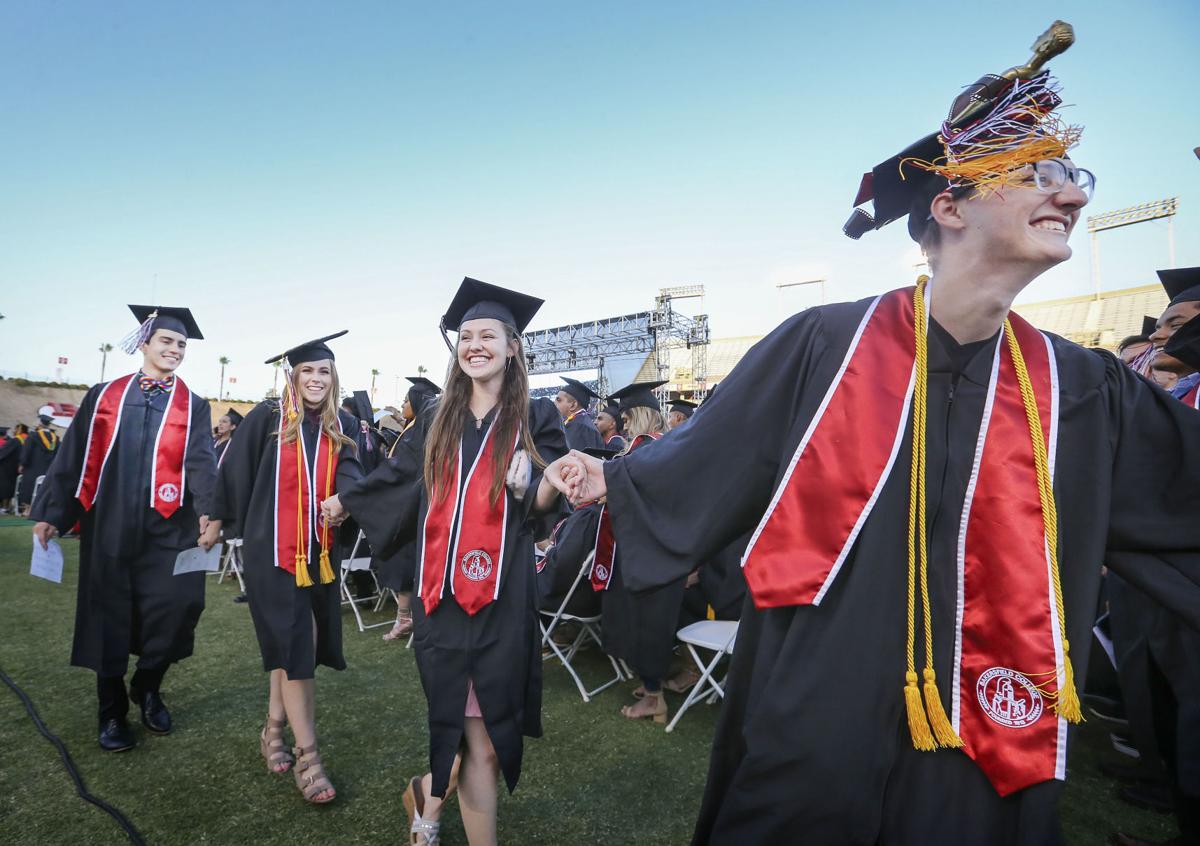 Andrew Beard leads a group of theater majors to the Bakersfield College class of 2018 graduation held Friday at Memorial Stadium.

CSUB graduates prepare to walk on to the campus soccer field for the 48th Annual Commencement ceremonies.

Andrew Beard leads a group of theater majors to the Bakersfield College class of 2018 graduation held Friday at Memorial Stadium.

CSUB graduates prepare to walk on to the campus soccer field for the 48th Annual Commencement ceremonies.

Bakersfield College and Cal State Bakersfield both graduated more students this year than they have in at least five years, according to data from the colleges.

Bakersfield College handed out associate’s degrees or certificates to 3,670 students earlier this year, a jump of about 30 percent from 2,542 in 2017. CSUB provided undergraduate degrees to 1,806 students this past school year, about a 14 percent increase from 1,579 the previous year.

Liz Rozell, vice president of instruction at Bakersfield College, credited the school’s bump in numbers in large part to a new certificate of achievement for transfer general education that the college started offering last school year. The program is similar to an associate’s degree for transfer but requires less time commitment.

“If you have a highly motivated student, the certificate doesn’t really matter. They’re on a path to getting their associate’s degree,” she said. “If you have a student that is not as committed and needs a little more clarity and a sense that they’re accomplishing something along the way, this is for them.”

Rozell said students can complete the requirements for the certificate within one to two years.

While the certificate doesn’t take care of all general ed requirements needed to get into a university, Rozell said the goal is to provide students encouragement to keep working toward a degree. The certificate takes around 40 units to complete while a degree is 60 units.

Rozell said the certificate has been popular with students and caused a huge jump in the number of certificates awarded this year. According to the college’s data, 1,441 certificates of achievement were handed out this year, making up nearly 40 percent of total awards conferred.

In comparison, only 343 certificates of achievement were handed out in 2017, making up only around 13 percent of total awards conferred.

“It’s saying you have your general education and you’re on your way to getting your degree,” she said.

Rozell believes another significant impact on the rise in graduates is the college’s new Guided Pathways model, a framework that informs everything the college does.

The goal of Guided Pathways is to graduate students more quickly by making the path to graduation more clear to students with a detailed plan and more counseling and other support services.

“What we’ve seen is in the past, it wouldn’t be uncommon for a student to graduate with 100 or more units and meander around,” she said. “This pathway gets them more focused and helps them graduate with 60 units.”

Rozell said Guided Pathways brings the whole college together with the singular goal of putting students on a clear path to graduation.

“We’re working as a team to say it’s not just one person’s job to get them through to completion. We have to make sure they understand the processes, how to get from point A to point B,” she said. “This is a team-oriented, collaborative approach to help students complete.”

Vernon Harper, associate vice president of academic programs for Cal State Bakersfield, said he believes the initiative has already had a positive impact on the university’s graduation rates.

“One of things we’re doing is revising our advising structure, making sure (students) get adequate advising,” he said. “We’ve created a variety of roadmaps for nearly all degrees that clearly lays out the steps needed to graduate.”

Harper said he expects the graduation rates to continue to rise in the coming years as more students take advantage of the benefits of the new initiative.