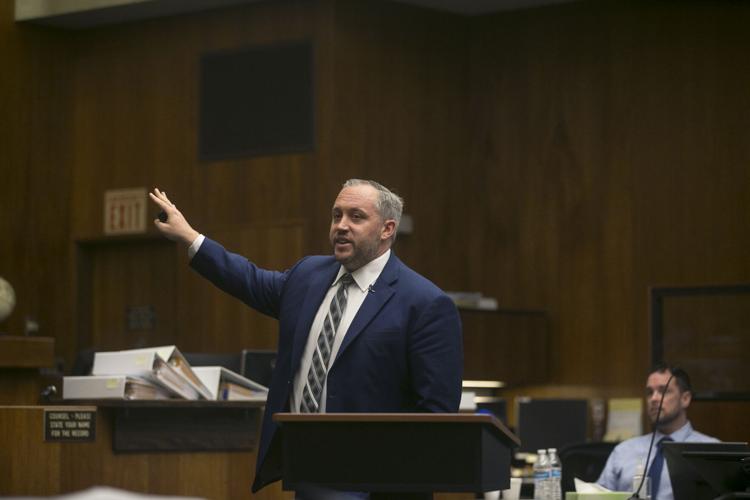 Timothy Hennessy, the attorney for the defense, makes his closing arguments to the jury as his client, Matthew Queen, looks on. 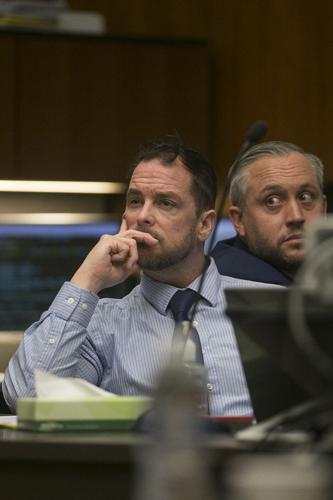 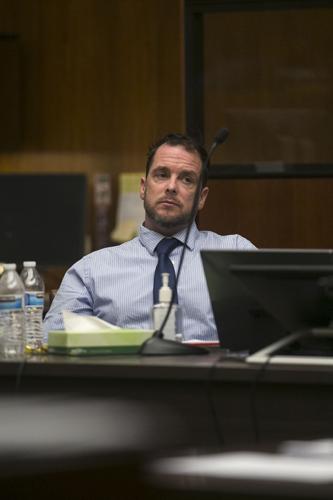 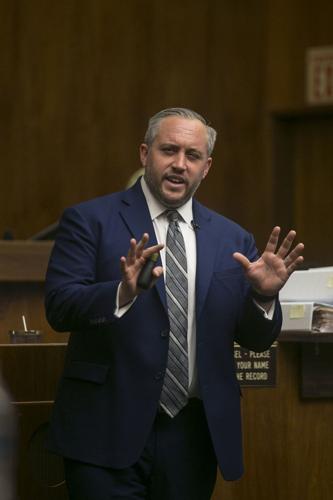 Timothy Hennessy, defendant Matthew Queen's attorney, makes his closing arguments to the jury, asking them to find Queen not guilty of the murder of Micah Holsonbake. 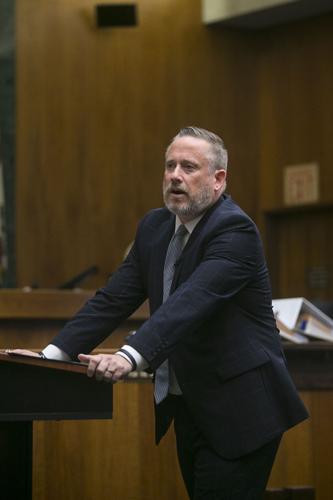 Deputy District Attorney Eric Smith delivers his closing argument to the jury on Monday. Smith reviewed key evidence for the jury, urging them to find Matthew Queen guilty on all 35 charges. 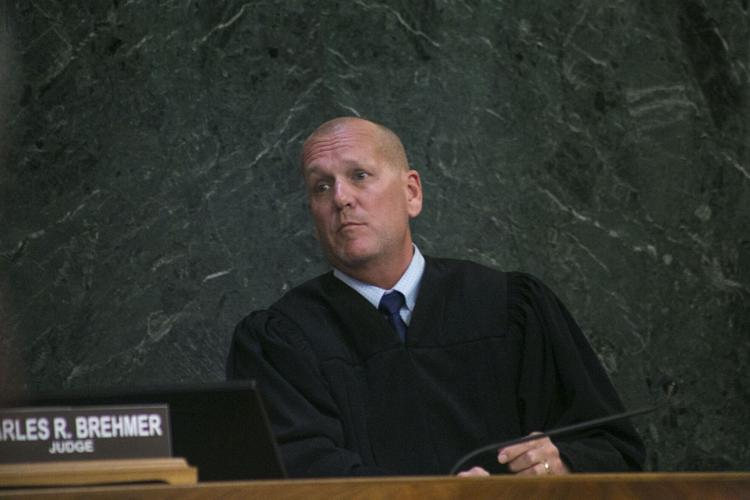 Judge Charles Brehmer gives instruction to the jurors to prepare them for the deliberation process.

Timothy Hennessy, the attorney for the defense, makes his closing arguments to the jury as his client, Matthew Queen, looks on.

Timothy Hennessy, defendant Matthew Queen's attorney, makes his closing arguments to the jury, asking them to find Queen not guilty of the murder of Micah Holsonbake.

Deputy District Attorney Eric Smith delivers his closing argument to the jury on Monday. Smith reviewed key evidence for the jury, urging them to find Matthew Queen guilty on all 35 charges.

Judge Charles Brehmer gives instruction to the jurors to prepare them for the deliberation process.

After roughly 60 witnesses testified and attorneys presented more than 150 pieces of evidence throughout the 13-day Bakersfield 3 trial, jurors got the case Monday after the conclusion of closing arguments.

Deputy District Attorney Eric Smith sought to delegitimize defendant Matthew Queen’s story about the death of Micah Holsonbake, a member of the Bakersfield 3. On the stand, Queen said Holsonbake died after Baylee Despot, his ex-girlfriend, dropped a 40-pound dumbbell on Holsonbake’s head during a struggle between Queen and Holsonbake at Queen’s house.

The couple then dismembered Holsonbake and scattered his remains throughout Kern County, according to Queen’s testimony.

Queen has pleaded not guilty to 35 charges, including first-degree murder, torture and kidnapping in the death of Holsonbake. Queen also faces 20 counts of weapons allegations, assault and intent to terrorize charges. Despot, Queen's ex-girlfriend who's considered one of the Bakersfield 3, is also charged in the death of Holsonbake, but she has been missing since April 2018. James Kulstad, who's also considered one of the Bakersfield 3, was killed in an unrelated drive-by shooting around the time Holsonbake and Despot were reported missing in 2018.

Prosecutors have alleged Holsonbake died in the garage of Matthew Vandecasteele, Queen’s former best friend, after Queen and Despot kidnapped and tortured Holsonbake over a missing gun. The jury was instructed Monday that if they find Queen not guilty of premeditated first-degree murder, then a second-degree murder conviction is another possible finding.

Timothy Hennessy, Queen’s attorney, sought to raise doubt in the testimony from a number of witnesses considered Queen associates by mentioning their drug use and conflicting testimony.

Smith began his closing argument by focusing on the defendant’s alleged pattern of behavior.

“Ultimately his behavior — violent behavior — is what led to the homicide and killing of Micah Holsonbake,” Smith said. “And he must be held accountable for the crimes he has committed.”

Smith reviewed the manufacturing and possession of weapons charges Queen faces and detailed to the jury the various guns that authorities seized from Queen, all which were operable and several of which were considered "ghost guns," referring to unserialized, privately made firearms.

Smith described the way Queen allegedly interacted with each individual: He sought to extract information through violent means.

With Farmer, Queen sought to understand whether his ex-girlfriend was cheating on him and threatened her with a gun, Smith alleged. Queen also allegedly threatened Farmer while she chatted with Despot at his house, the prosecutor added.

Queen zip-tied Seiler to a chair, pistol-whipped him and shocked him with a dog-collar because he thought Seiler was a snitch, Smith said. With Buchanan, Queen drove to his room at the Red Roof Inn and also threatened him with a gun over alleged fraud, Smith said, referring to previous testimony during the trial.

Smith said Despot was equally involved in the murder of Holsonbake — the couple sought to extract information from Holsonbake, which was what compelled them to kill him.

The complete body of Holsonbake has never been found. His arm washed up from the Kern River in August 2018 and his skull was found in Lake Ming around August 2021. The jury visited both sites last week during a jury viewing, Smith said.

“And then on top of them killing him … they cut him up into pieces,” Smith said. “They not only murdered him, but they destroyed what he was — who he was. Scattered him throughout Kern County — his family could not bury him whole. They destroyed the evidence of crime and they destroyed a family’s chance to bury him.”

This case is a tragic tale, Hennessy said during his closing argument. It is not the horror story the District Attorney’s Office has spun, he added.

The lives of many of the witnesses were ravaged by drug use, the attorney said. Queen, a man with a career and children, relapsed on methamphetamines, while those drugs warped Holsonbake into a different man, he added. Holsonbake became an “erratic, loose cannon.”

Hennessy did not dispute Queen had guns, but implored the jury to acquit his client of the first-degree murder charge.

Farmer and Seiler provided conflicting testimony, he added. Hennessy said he assumes Farmer is a good mother, and therefore she would not return to Queen’s house with her child if he had threatened her. Seiler’s roommates remember his alleged kidnapping incident differently, Hennesssy said.

The loss of memory affected Seiler, Hennessy said, as he displayed messages of Seiler saying “I wish I remembered” in regard to the second incident.

Hennessy also sowed doubt about the testimony of the prosecution’s star witness, Vandecasteele. He discussed how police fed Vandecasteele details throughout their almost three-hour interview, which caused him to turn on his friend.

Police told Vandecasteele that he would miss time with his kid, then showed him footage of a gender reveal party for a child his ex-girlfriend, Sara Wedemeyer, was having with Queen. Prosecutors have said Vandecasteele came forward with key information after finding out Wedemeyer and his former best friend Queen had a child together.

Those records showed Queen was not home around 1:17 p.m. March 22, 2018. Queen testified previously Holsonbake came to his house at about noon and died around that time.

Furthermore, Queen had the chance to show law enforcement where he buried the bones and hid the dumbbell — but, nothing was found, besides a vertebra, Smith said.

“He doesn’t care about the effect of his trip … what it has on the family,” Smith said. He added, “Everything is a joke to (Queen). But ultimately, there is a man who was murdered.”