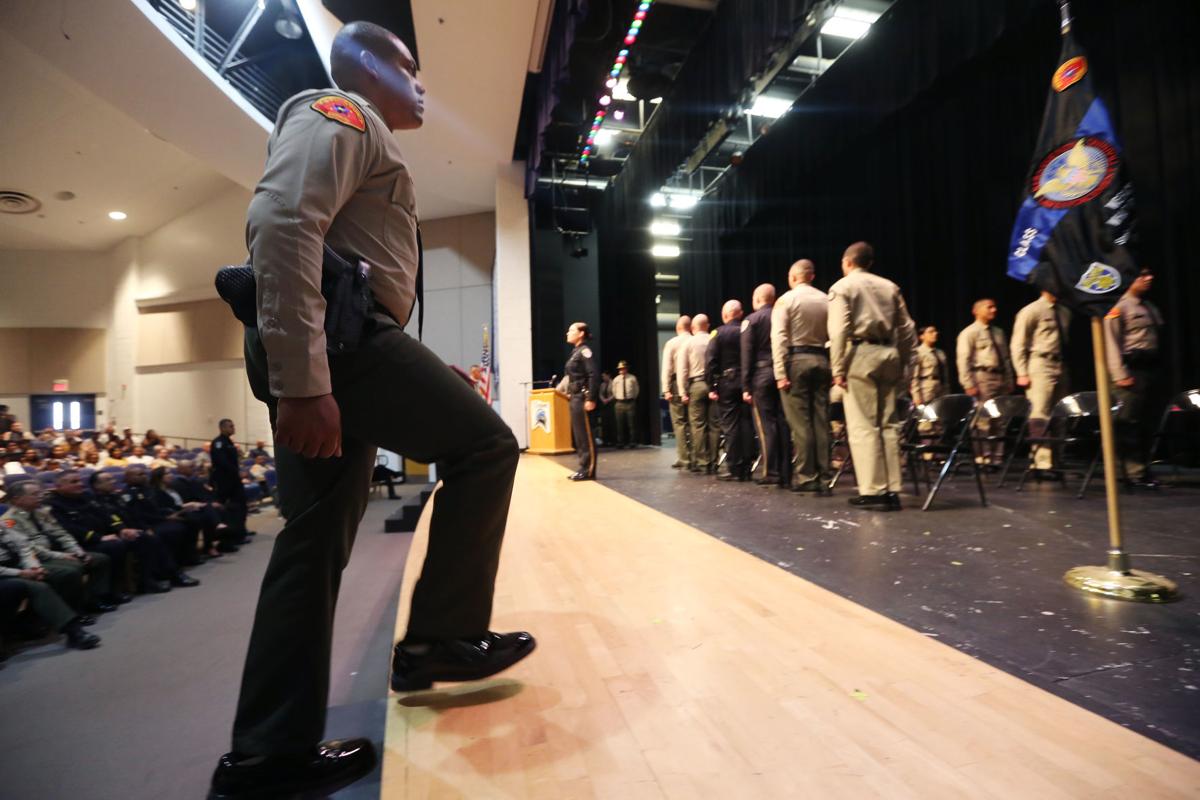 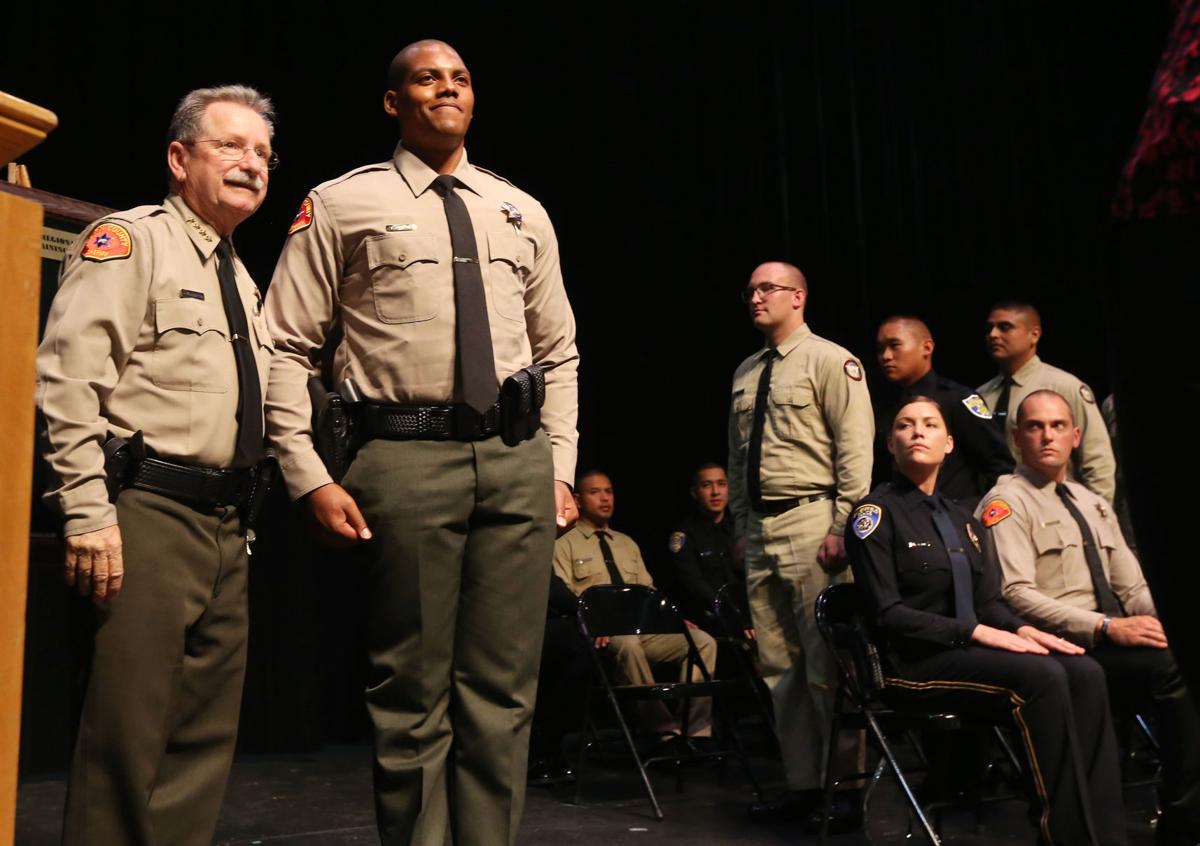 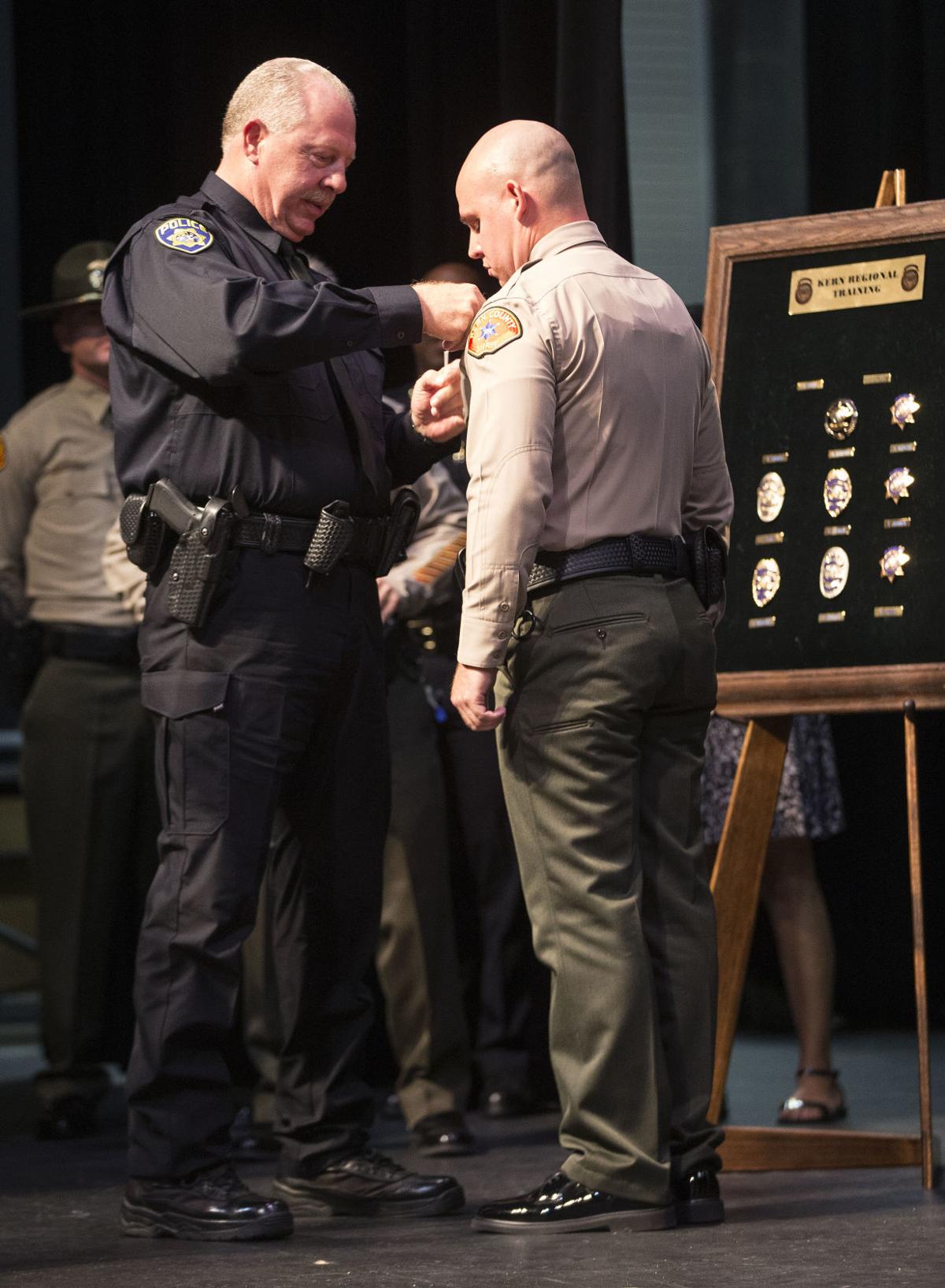 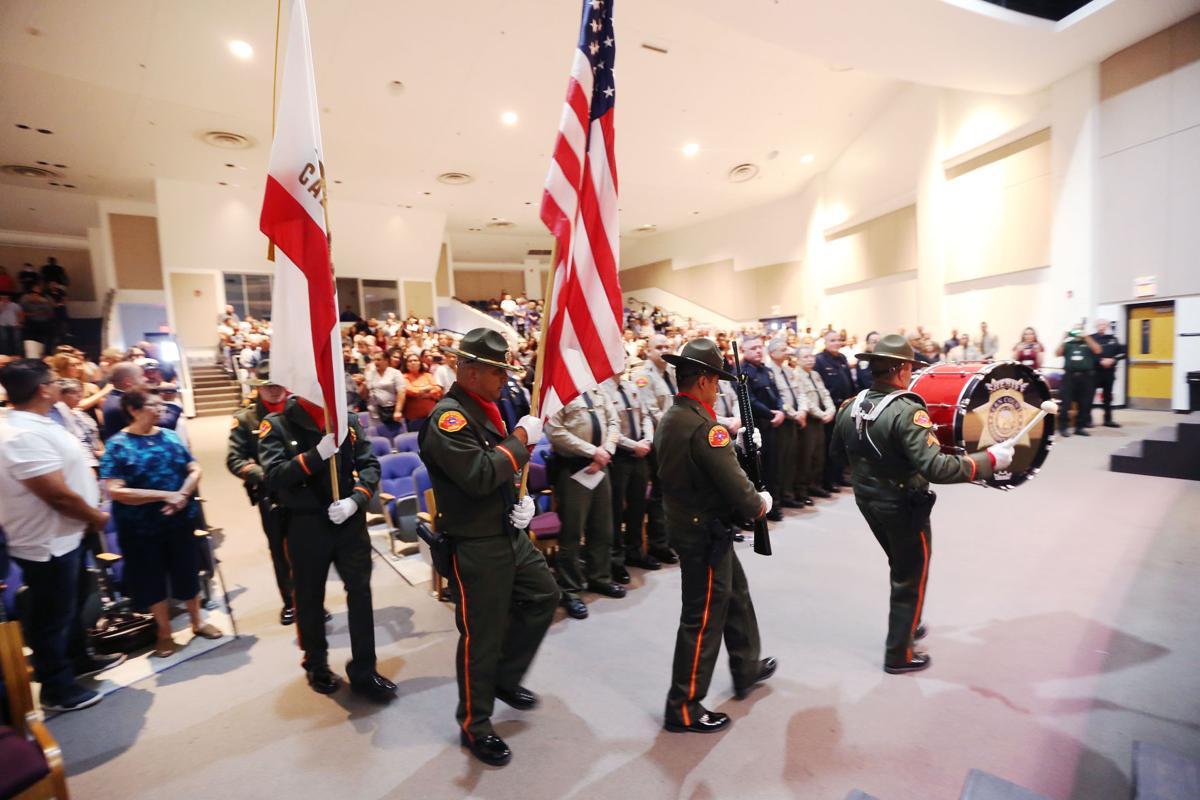 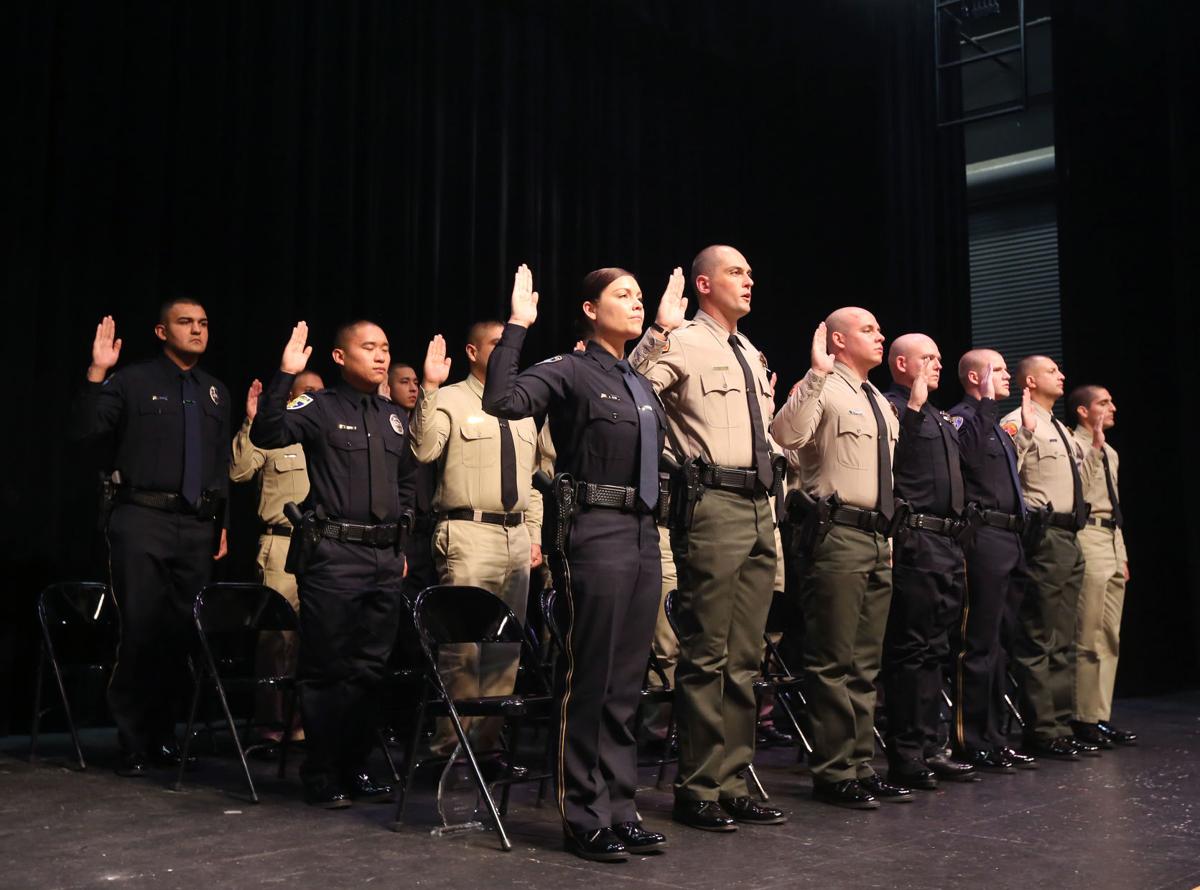 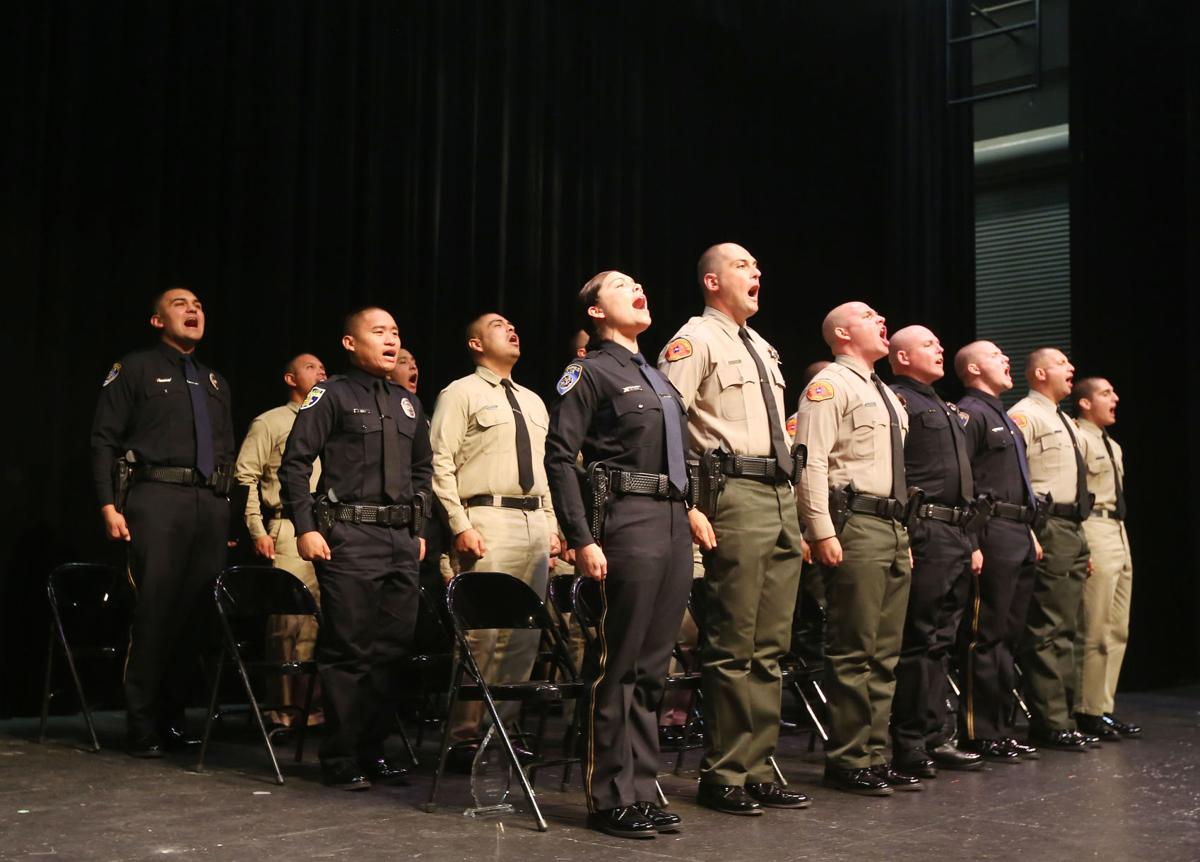 On Friday, the Kern County Sheriff’s Office welcomed five of its newest members into its ranks.

Out of about 1,000 applicants, these were the only five who survived the rigorous background checking and training procedures required to become a deputy sheriff.

As the recruits took their place, along with 16 other police recruits destined for other agencies, smiles, clapping and congratulations abounded at a graduation ceremony that took place at Frontier High School.

For some, the ceremony was the final piece of a lifelong dream to become a law enforcement officer. But the newest members of the Sheriff’s Office face an uncertain future within the department.

Due to relatively low salaries, retention rates for deputies are dangerously low, and recruitment of new employees cannot keep up with the flow of deputies outside the county.

The situation has gone on for years and could be at a breaking point. With empty substations, deputies stretched thin throughout the county, and detectives overwhelmed with large caseloads, many within the department, including Sheriff Donny Youngblood, are calling the situation a “crisis.”

And without any solutions on the horizon, the drain on the department is likely to last for years as more deputies leave to seek better pay and few recruits are found to replace them.

“Right now there is no fix,” Youngblood said. “The truth is, as competitive as this market is for deputy sheriffs, if you’re not going to pay the same as everyone else, you’re going to have difficulty retaining this generation of employees.”

Over the last five years, more than 150 deputies have transferred to other agencies, with zero coming into the county through transfers. Even some sergeants with more than 10 years of experience have left, taking entry-level positions elsewhere that pay as well as their Kern County salaries, with the added bonus that they get to live someplace “better.”

In addition, the Sheriff’s Office is holding 79 positions vacant in order to meet the budget set by the Kern County Board of Supervisors.

The transfers and vacancies have hollowed out the department, increasing response times to all but the most critical calls, and placing a heavy burden on deputies patrolling the streets.

“Most of my guys work through their lunches. Very rarely do we have breaks anymore,” said Kern Law Enforcement Association President Richard Anderson. “It’s not like the old days where Sunday mornings would be super-quiet.”

The deputies who patrol metro Bakersfield have been hit the heaviest by the low staffing levels. At times, the call logs pile up, and deputies are forced to drive from call to call without time to do what is called “proactive policing,” deterring criminal activity by showing a police presence in a certain area.

Patrol numbers in metro Bakersfield can range from about 25 deputies to as low as eight to nine at a time.

Youngblood said the situation was a big change from previous decades. In 1991, he said, 81 deputies were assigned to metro Bakersfield while today, about 50 to 55 are assigned.

“It impacts everything we do,” he said. “It impacts the ability to catch the bad guy. If you have one guy respond to a scene and it takes five minutes for the other two or three deputies that he needs to get there, the bad guy is gone.”

For deputies who patrol the open areas of Kern County, backup can be 20 minutes away.

Sgt. Jeff Harbour said some rural residents have begun not reporting crimes because they feel sorry for the heavy workloads of the deputies.

“We’re being told a lot of victims of major thefts are not calling us as much, because they say, ‘We know you’re hurting,’” said Harbour, who works in rural areas of the county. “Which is obviously troubling.”

Staffing is so low that some substations cannot afford to lose a single deputy.

“If a guy calls in sick in Taft, Taft doesn’t have a deputy,” Anderson said. “These things didn’t happen 20 years ago, 15 years ago.”

Last November, Kern County voters roundly rejected a ballot measure that would have raised the sales tax in unincorporated county areas by 1 percent. The additional funds could have addressed many of the issues deputies say are plaguing the department.

Youngblood, who proposed the measure as a way to stanch the flow of deputies out of the department, said he still believed a sales tax increase could help, especially if the tax was specifically designated for public safety.

But he doesn’t think he is the right man to lead the push.

“You need a new face,” he said. "You need a new charge of people, not the sheriff saying there is a shortage, but people that really experience this like the deputies’ union and the fire department’s union. Those people are the ones that really feel the impact. Citizens in our community, they’re the ones that feel the impact. They need to step up and carry that ball, and I’ll support them all the way.”

Recently, KLEA gave a presentation to the Board of Supervisors, requesting some action be taken to address the issues in the Sheriff’s Office.

“We need hope,” Anderson said at the meeting. “We don’t have much of it right now.”

But without a readily available funding source, supervisors could not address the low salaries and unfunded positions in the department, meaning the problems are likely to continue.

For some, that isn’t good enough.

“There are a large number of people here in this department that have one foot out the door,” Harbour said. “With no way to replace them in a quick way, the staffing is going to get worse.”

The Kern County Sheriff’s Office has decided to shutter its gang unit, the department announced on Wednesday.