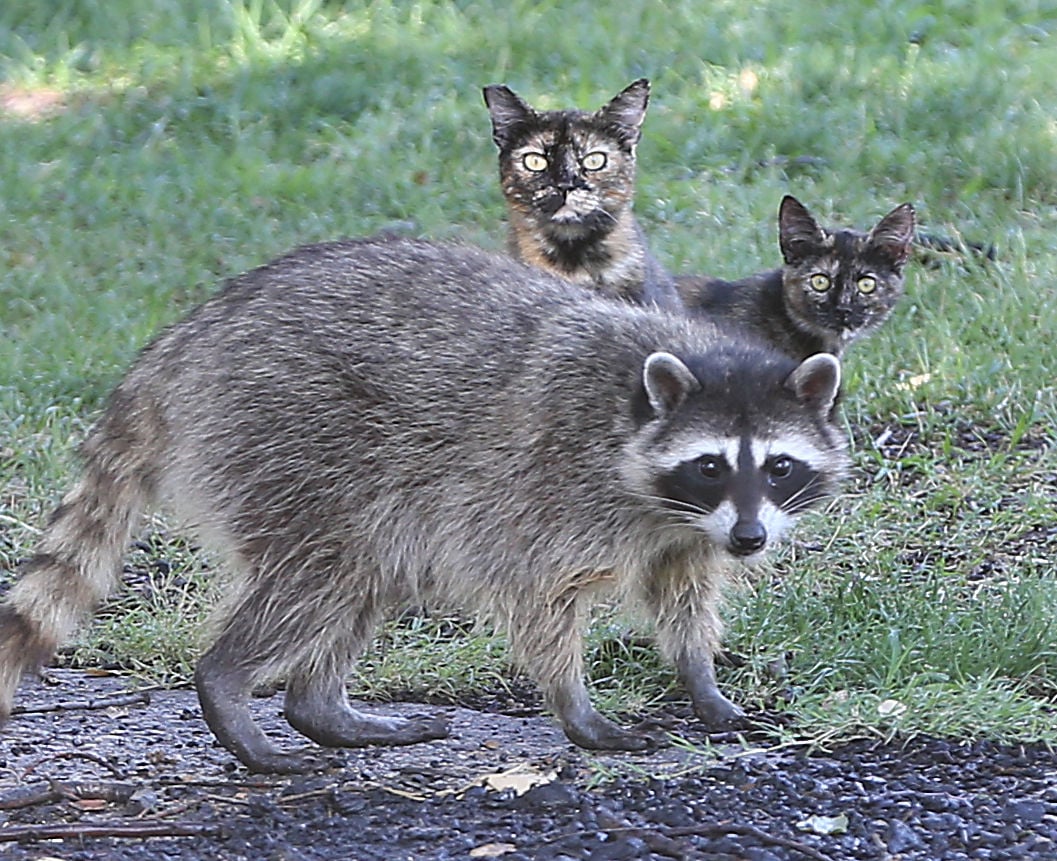 A raccoon and a pair of feral cats eat cat food together in Hart Park. It's clear that when volunteers feed the cats at the park, they are also feeding wild animals such as raccoons, skunks, and squirrels, a practice that is prohibited in national parks and even other county parks. Some argue that the presence of the feral cats harms wildlife in the park. 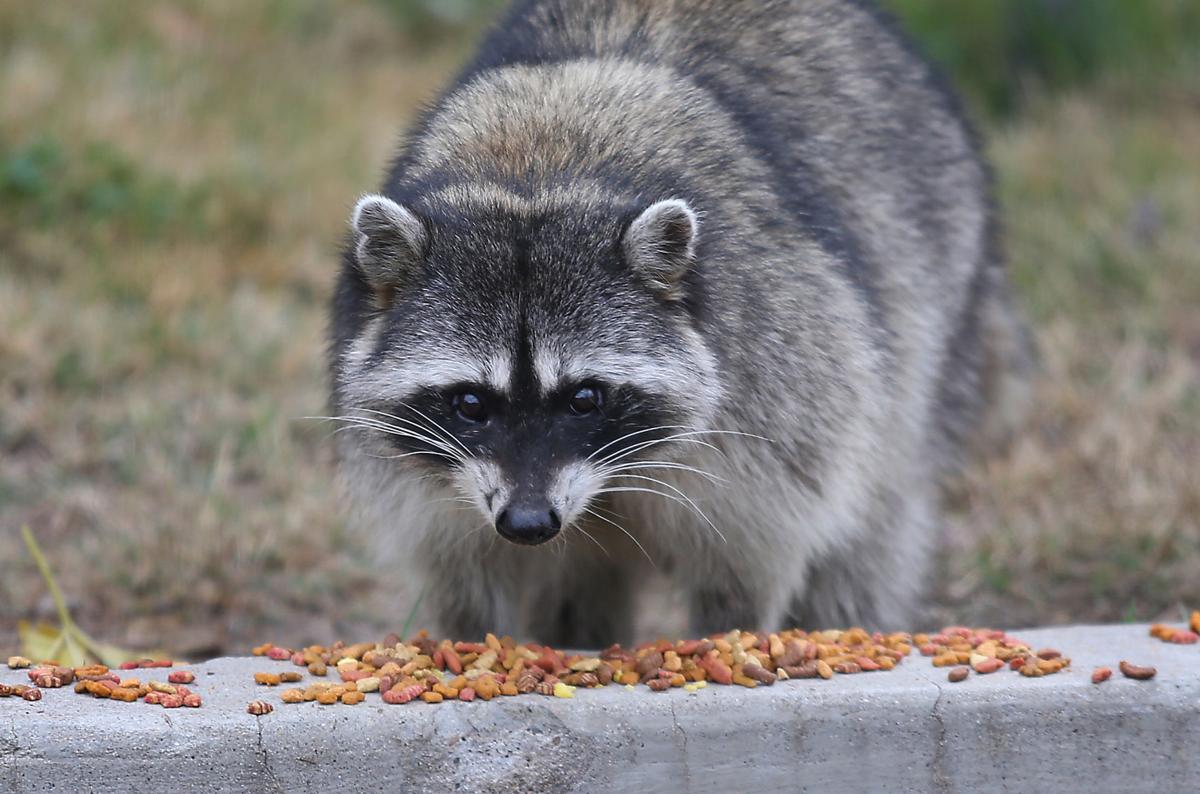 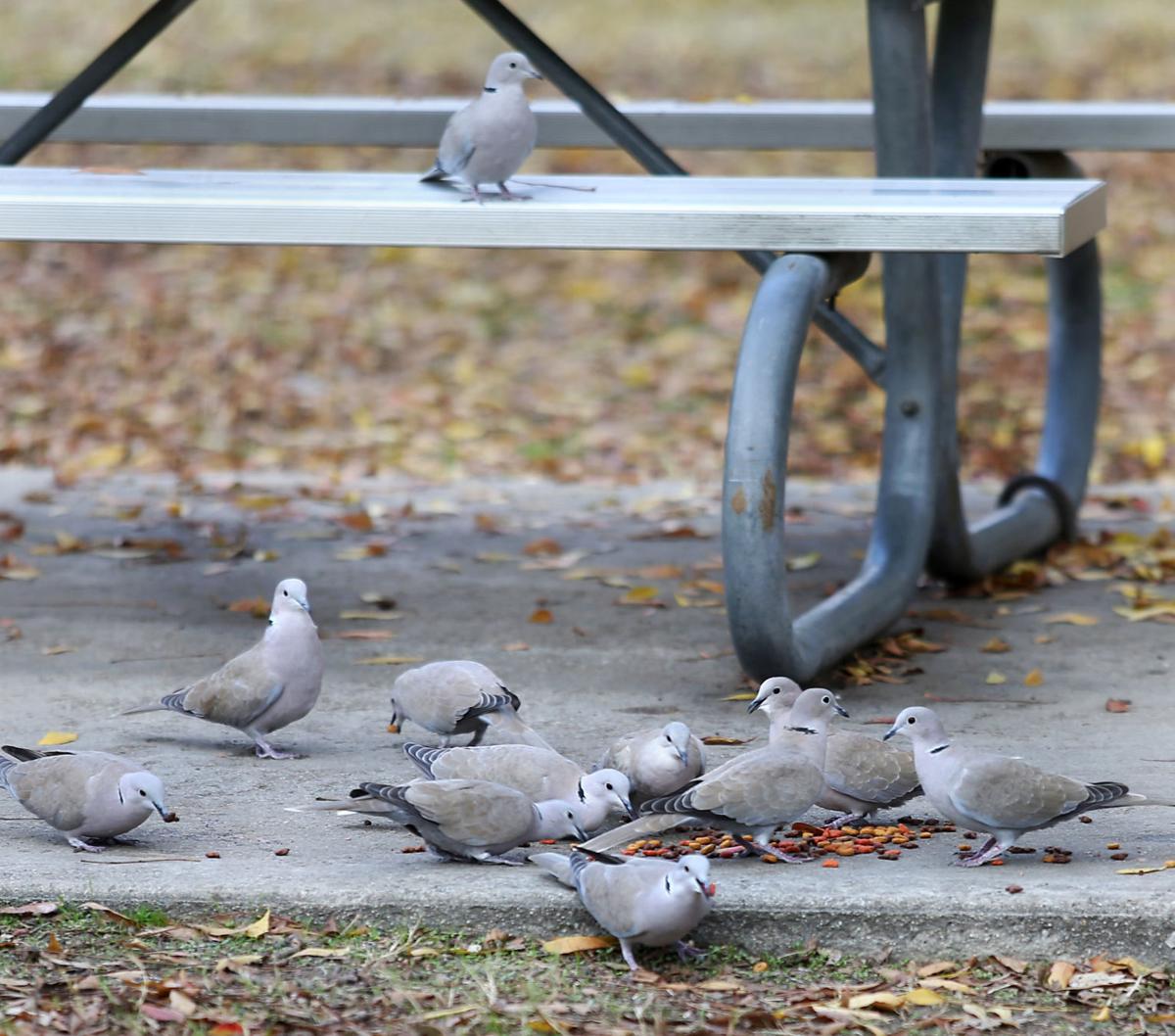 A flock of doves graze on cat food left for the felines of Hart Park. 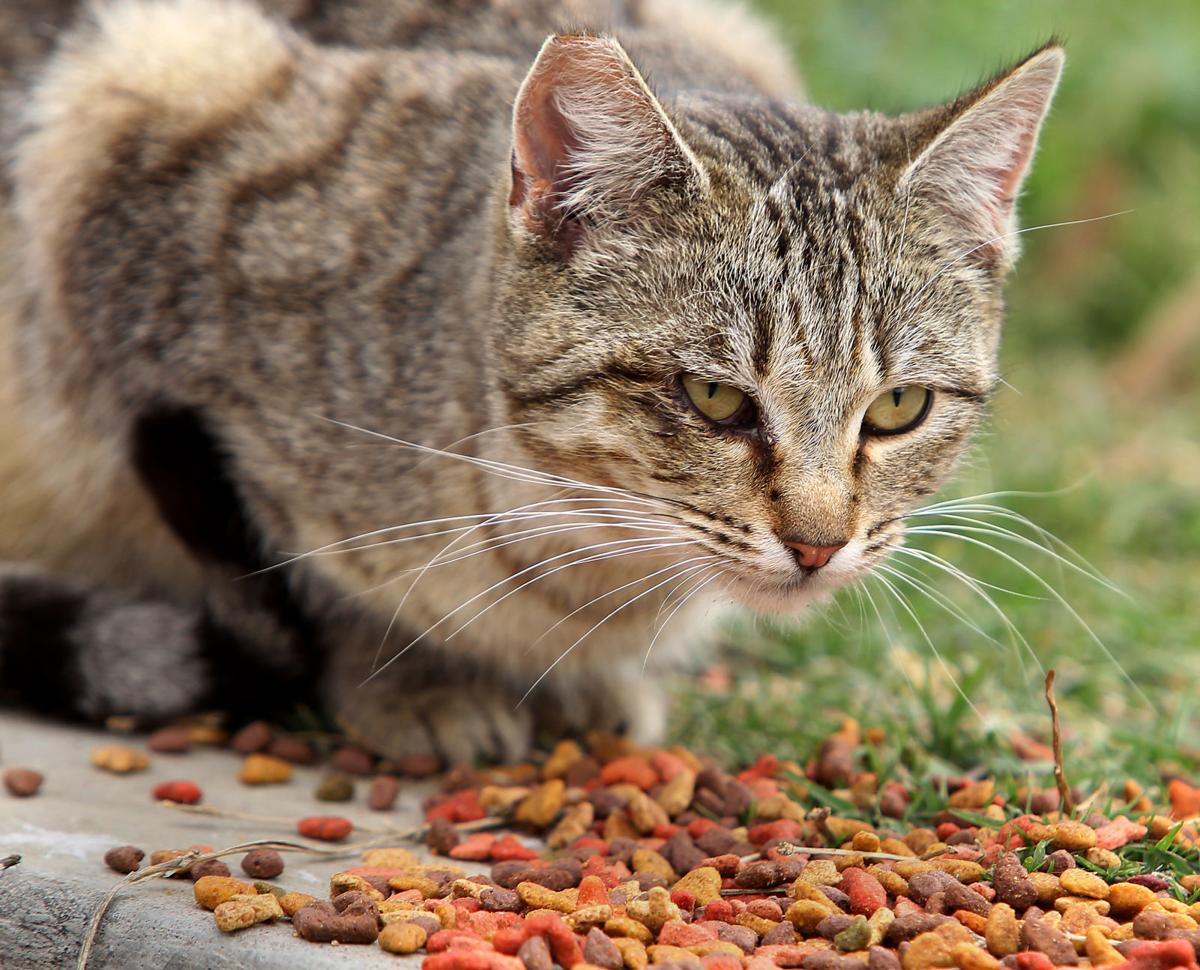 The estimated 250 to 300 feral cats in Hart Park never seem to be lacking for food. Many volunteers feed the cats on a regular basis, although an effort is being made to manage the feeding by allowing only certified individuals to provide food for the cats.

A raccoon and a pair of feral cats eat cat food together in Hart Park. It's clear that when volunteers feed the cats at the park, they are also feeding wild animals such as raccoons, skunks, and squirrels, a practice that is prohibited in national parks and even other county parks. Some argue that the presence of the feral cats harms wildlife in the park.

A flock of doves graze on cat food left for the felines of Hart Park.

The estimated 250 to 300 feral cats in Hart Park never seem to be lacking for food. Many volunteers feed the cats on a regular basis, although an effort is being made to manage the feeding by allowing only certified individuals to provide food for the cats.

They say they are working together to manage the feral cat population at Hart Park.

And they are. They do.

But sometimes it seems Kern County Animal Services and feline advocate group The Cat People see the issue of cats in the park with different eyes and from different perspectives.

Following publication of last week's story about the hundreds of cats in the park and efforts to both feed them with one hand and move them with the other, two individuals associated with The Cat People told The Californian that the county had set a goal (or deadline) with some flexibility to remove hundreds of cats from the park by June.

"I think that is their goal," Hays said of the county, "but we all realize that some of the really frightened, less sociable cats will be much more difficult to remove — those have to be trapped and most have been (trapped) at one point so it will be harder to do this.

"I would like to say that is a lofty but necessary goal," she said. "You should talk to county people."

Kern County Administrative Officer Ryan Alsop said any confusion is likely related to a mutual agreement between Animal Services and The Cat People.

"They've identified a six-month window, which ends in June," Alsop said, "mainly related to their safety and overall efficacy of capturing those they can to put up for adoption. There was never a deadline given or set by my office or made clear to anyone."

"The bottom line is that the feral cats out at Hart Park are a problem on several levels," he said. "Everyone involved agrees and we are working collaboratively together to manage the problem. Success ultimately is far fewer feral cats running around out there."

The county has a plan for improvements at the park — staggered each year over the next several. Improvements are in the works for bathrooms, trails, fencing, signage and overall public safety out at the park.

The effort to manage the cat population is a collaboration between the two entities, said county Animal Services Director Nick Cullen.

"Nothing was put on paper, as they (The Cat People) are not and cannot be obligated to help find these cats forever homes. But keep in mind, these volunteers love these cats dearly, and are passionate about them being well-taken care of long-term. As far as financial support, no. Logistical support comes when the cats come to us. We handle placement."

"The Cat People volunteers are bringing the cats to our Fruitvale shelter about five or 10 at a time," he said.

Through education and enforcement, if the county can manage to get people to stop introducing new cats to the park, and cat advocates continue to succeed in getting friendly cats removed and adopted, then the remaining neutered feral or unsocialized cats can live out their lives in the park.

Convincing people not to dump cats in the park could be difficult, but Cullen is willing to try.

Raising public awareness through the news media may help. And new signs warning people that dumping cats is not only unlawful, but cruel, may help spread the word. Video surveillance at the park, some periodic patrolling by Animal Control Officers, and the park rangers being aware of the issue should also help, Cullen said.

Fines for the criminal violation are typically set by the courts, but the maximum fine is $500.

Cullen said he doesn't know how many people have been cited for dropping off pets at the park. "We issue citations for animal abandonment relatively frequently, but it is not typical that it is issued for this particular circumstance," he said.

"We will typically cite for this when an owner vacates a property leaving an animal behind, or if someone allows an animal to go without care for a period of time," he said. "The logistics of actually catching someone as they are 'dumping' an animal, taking into account that it is likely done when (animal control officers) are not actively on duty, makes it very difficult to cite for."

Those who abandon cats in the park are guilty of more than a simple infraction, Jean Hughes Gutierrez, a pet and house sitter and animal behavior consultant, said in an email.

"Those of you rounding up cats and dumping them at Hart Park, this is terrifying to them," she said. "They will hide, freeze, and not eat or drink. Some will try to find their way home and get attacked by human and animal predators, hit by a car, injured," and more.

For years, feral cats have lived in Hart Park, many of them abandoned by their owners or others. But a collaborative effort between Kern Count…

It was like watching the legend of the Pied Piper, only with cats instead of mice.

Cats can breed faster than every six months, especially if there is a food supply. All the trapping really should be performed in under a month, prior to the next round of breeding. Also, all the cats should be removed and not released again, because even neutered cats can live another 10 or 15 years and continue killing the wildlife and spreading parasites to the humans and the other wildlife. Neuter release of feral cats just leaves cats there, attracts misguided cat feeders, and attracts more dumping. Remove, yes. Feed, no. Release or abandon, they should be fined heavily and discouraged by signs indicating all cats will be removed and no feeding allowed.

Best 'comfort' pal just passed after 17 years and many purr-fect conversations . . . & waiting on the steps. He loved to go in the car. . . or wait for me to drive home and work with me or watch TV . . . in between forays into the fields on his hunts. Wrote one amazing story about him with pics . . . and no sweat @ Vet. Always thought I'd precede. His predecessor (murdered @ 18 by neighbor dogs) was not 'replaced' (never) for two years. And when time eases this one, dunno if I can do it all over again. But am sensitive to their needs & those who care. Time will tell. Miss ya, Blazer.

And the consequences of sick feral cats spreading disease? They have to be more prone in the wild. Geez, a disease ridden mangy coyote lived at Hart Park for many weeks. Did Animal Control finally address that or did he finally succumb after weeks of torture? Too many humans are stupid.