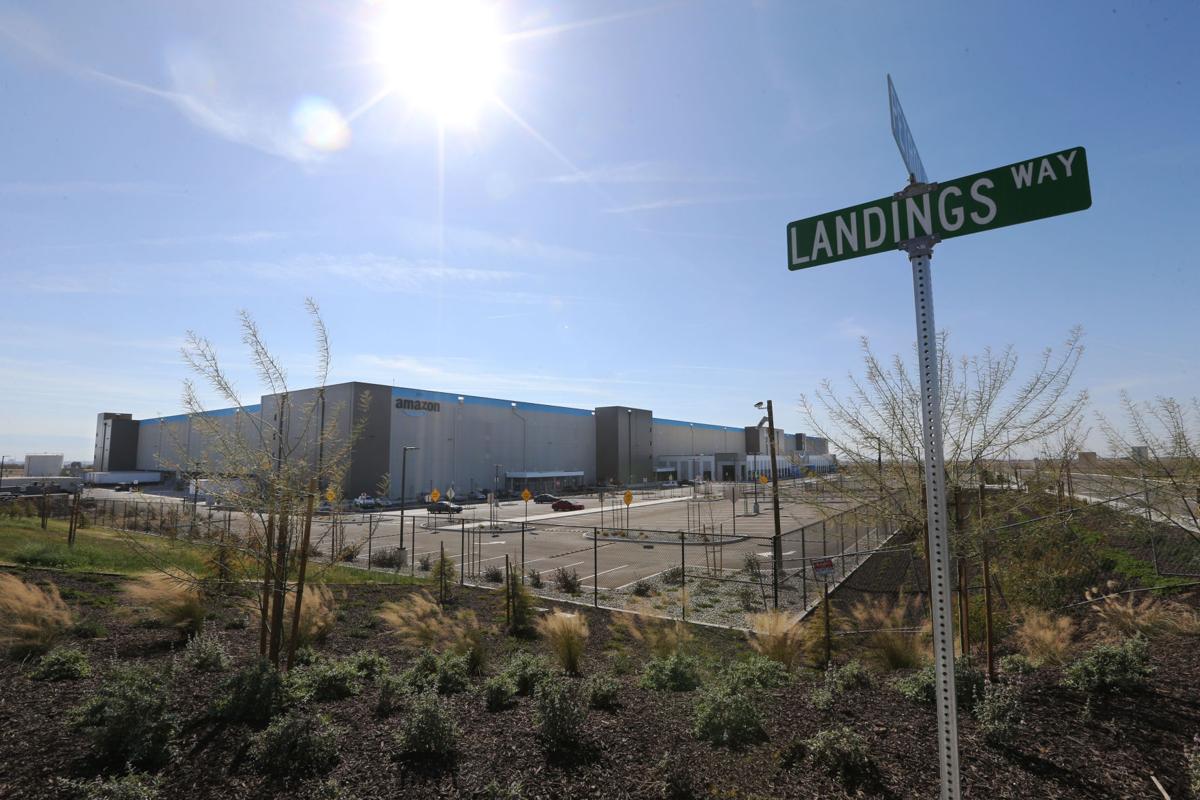 In this file photo from February 2020, Amazon works to complete work on this "fulfillment center" warehouse, seen from the corner of Landings Way and Petrol Road. 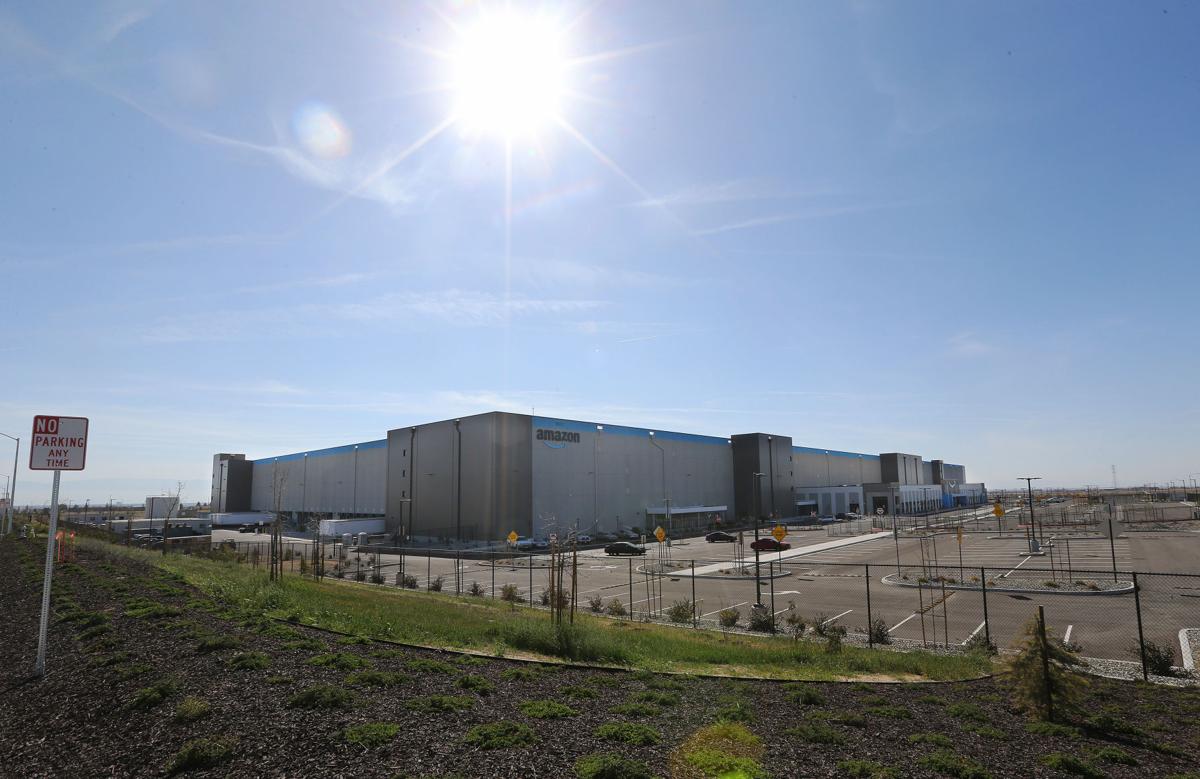 Amazon is finishing work on this "fulfillment center" warehouse, seen from the corner of Landings Way and Petrol Road.

In this file photo from February 2020, Amazon works to complete work on this "fulfillment center" warehouse, seen from the corner of Landings Way and Petrol Road.

Amazon is finishing work on this "fulfillment center" warehouse, seen from the corner of Landings Way and Petrol Road.

The excitement was almost palpable when news hit in August 2018 that Amazon was planning to build a massive distribution center near Meadows Field Airport.

The best part for many was that the online retail giant would employ perhaps 2,000 people at its four-story "fulfillment center." But people in local industrial real estate circles celebrated for a different reason.

To them, Amazon's $7 million purchase of about 65 acres north of Merle Haggard Drive was further evidence that the county was gaining traction among companies looking for a great place to build a distribution center.

Surely, they reasoned, other deals would follow soon, if for no other reason than one of the world's most valuable, savviest companies had seen fit to invest in Kern.

But in the year and a half since, no transactions have taken place. There have been other deals — large and significant ones. But local brokers say no industrial sales have taken place that can be directly traced to interest created by Amazon's decision to build near Bakersfield.

That's not to say large new distribution centers won't come, or that progress isn't being made. Bakersfield industrial property professionals say it's just that these things take time.

"The growth here is a slow, steady pace," said Bakersfield commercial real estate agent Steve Adams, senior vice president at ASU Commercial. "To expect this boom and this tremendous piggyback off of an Amazon deal ... is a little ambitious."

Colliers International broker Wesley McDonald attributed the lack of Amazon-related deals to the uncertainty that usually sets in prior to a presidential election and the fact that the Amazon center hasn't yet begun operations.

"As far as turnkey operations with trucks coming and going, you can't tell anybody that they (Amazon) are a success yet because they haven't opened their doors," he said.

To be clear, Amazon itself never claimed its presence would act as a magnet for other distribution operations. The company has been quiet about its plans for Bakersfield from the beginning.

Explaining its own reasons for coming to Kern, the company said by email it looks for a local workforce, which it found in abundance in the county, and that it was responding to customer demand. It said the idea was to set up shop somewhere it could serve consumers quickly.

Amazon added it expects to finish construction of the center later this year and launch operations before the holiday shopping season. It has begun hiring some key employees but does not appear to have begun recruiting for the bulk of its warehousing positions at the site.

The company's decision to locate by the airport was without question a significant development for the transportation, warehousing and logistics industry local politicians see as the third leg of Kern's economic stool, after oil and agriculture.

But it is, in another sense, incremental progress.

Since the 1990s, Tejon Ranch Co. has persuaded several large national retailers to build distribution centers on its land at the foot of the Grapevine.

The primary reasons retailers have established such facilities in Kern are geography and cost. While industrial property in the Inland Empire is closer to the ports of Long Beach and Los Angeles, such land has become increasingly pricey as compared with the Bakersfield area.

“(A)s a location in the Fresno-to-Bakersfield region enables overnight access to some 40 million consumers — more than from any other location on the West Coast — we are proving ever more popular with each such decision to locate here," Kress said by email.

Having Amazon build near distribution centers at Tejon Ranch's industrial property, which is home to warehouses owned by L'Oreal, Caterpillar and others, "just underscores the value companies of all sizes and industries see in our location, labor and logistics offerings."

Driven by interest from national retailers, Costar said demand for property has been consistent since early 2013, and that the local market's inventory of industrial space has risen 15 percent since 2015.

Annual rent growth has averaged 6.2 percent during the last five years, Costar reported, though the pace has slowed recently. It noted that the Bakersfield area's industrial rents remain about 25 percent higher than the Central Valley average.

Adams, the ASU broker who represents the development partnership behind Landings Logistics Center, the 138-acre industrial park surrounding the Amazon center, said some local real estate deals have been inspired by the online retail company. But they're generally retail-oriented, he said, not industrial.

Given that Amazon expects to hire about 2,000 people to work at the center, he explained, a number of restaurants and service businesses plan to open near the facility, which he said is all the more attractive because it is located near Highways 99 and 65, as well as along the 7th Standard Road corridor.

But in Shafter, home of the busy Wonderful park, Amazon's plans are a "kind of a non-issue," city Business Development Director Bob Meadows said.

"Nobody even brings it up," he added, saying there is nevertheless an expectation that the online retailer's presence is "supposed to help" eventually with business recruitment.

Industrial real estate broker Barry Hibbard sees the Amazon deal as more of an assurance to others that the Bakersfield area is, indeed, a good place to do business.

He credited Amazon's development with sparking two to three deals he is working on now. The key thing to understand is that these things take time, he said.

"It certainly doesn't hurt us" having an Amazon center nearby, he said. "It definitely helps us."

Pretty cool to open a warehouse that will have thousands of trucks coming and going while we shut down the oil industry for its environmental impact. Haha it’s cool though Bezos will surely pay a bunch of taxes so it will all balance out. When the 20k oil field workers are laid off, I suppose at least some of them can work for minimum wage at the warehouse which is really going to help the county! Thanks local leadership! I love traffic and all these trucks are really going to mesh well with the community during the next ten years of road work! Thank you soooooo much!