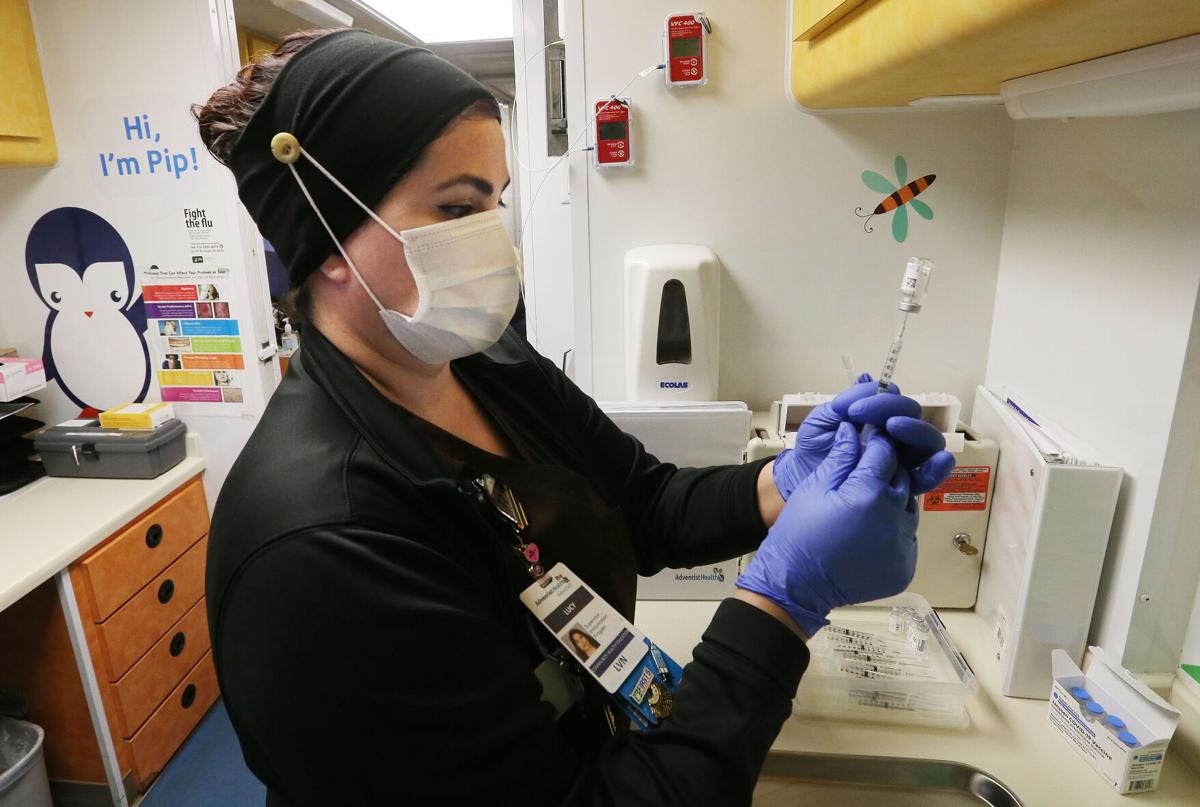 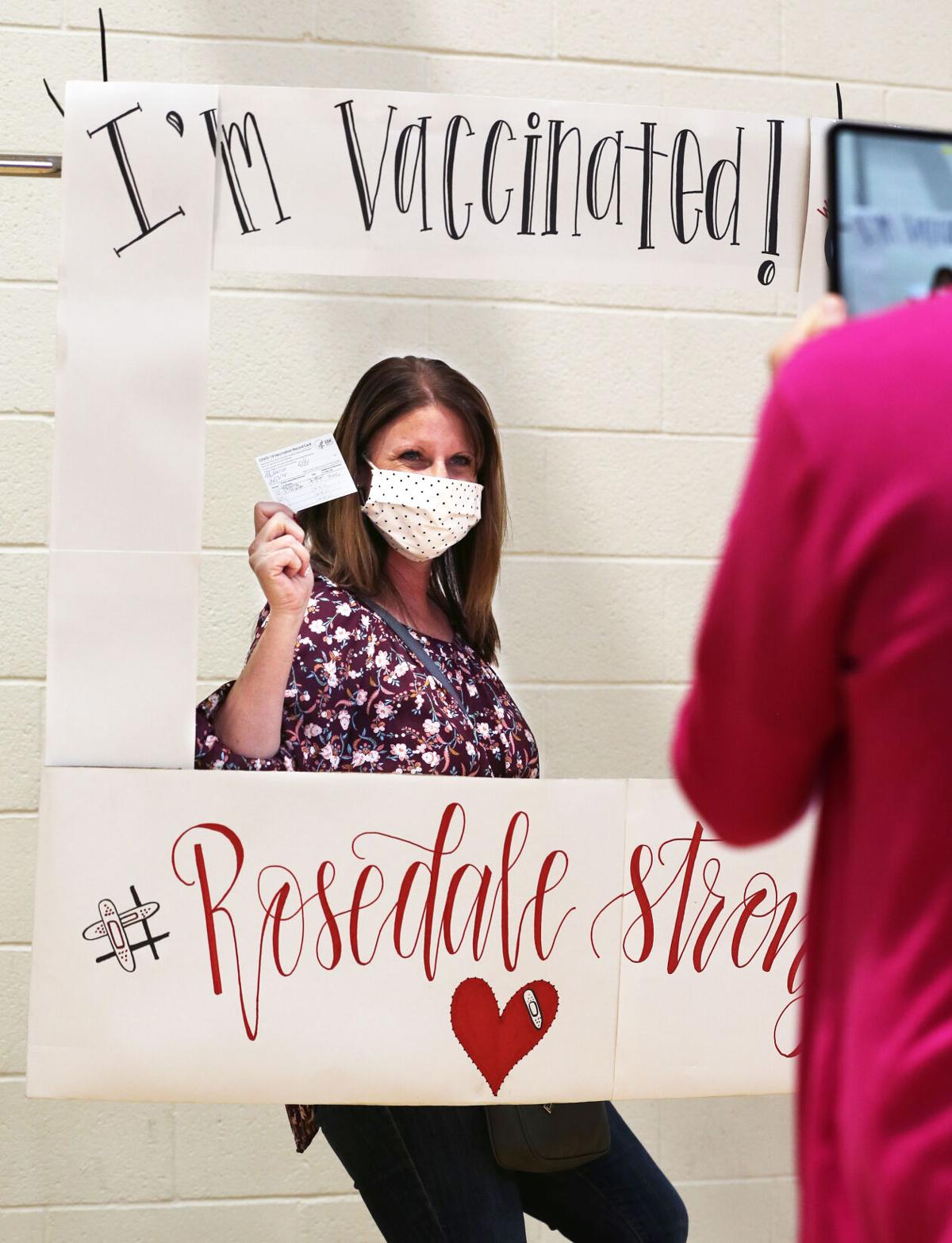 Effie McQueen, a sixth-grade teacher at Centennial Elementary School, celebrated her vaccine at a photo booth set up in the waiting area of the gymnasium at Rosedale Middle School on Feb. 23. 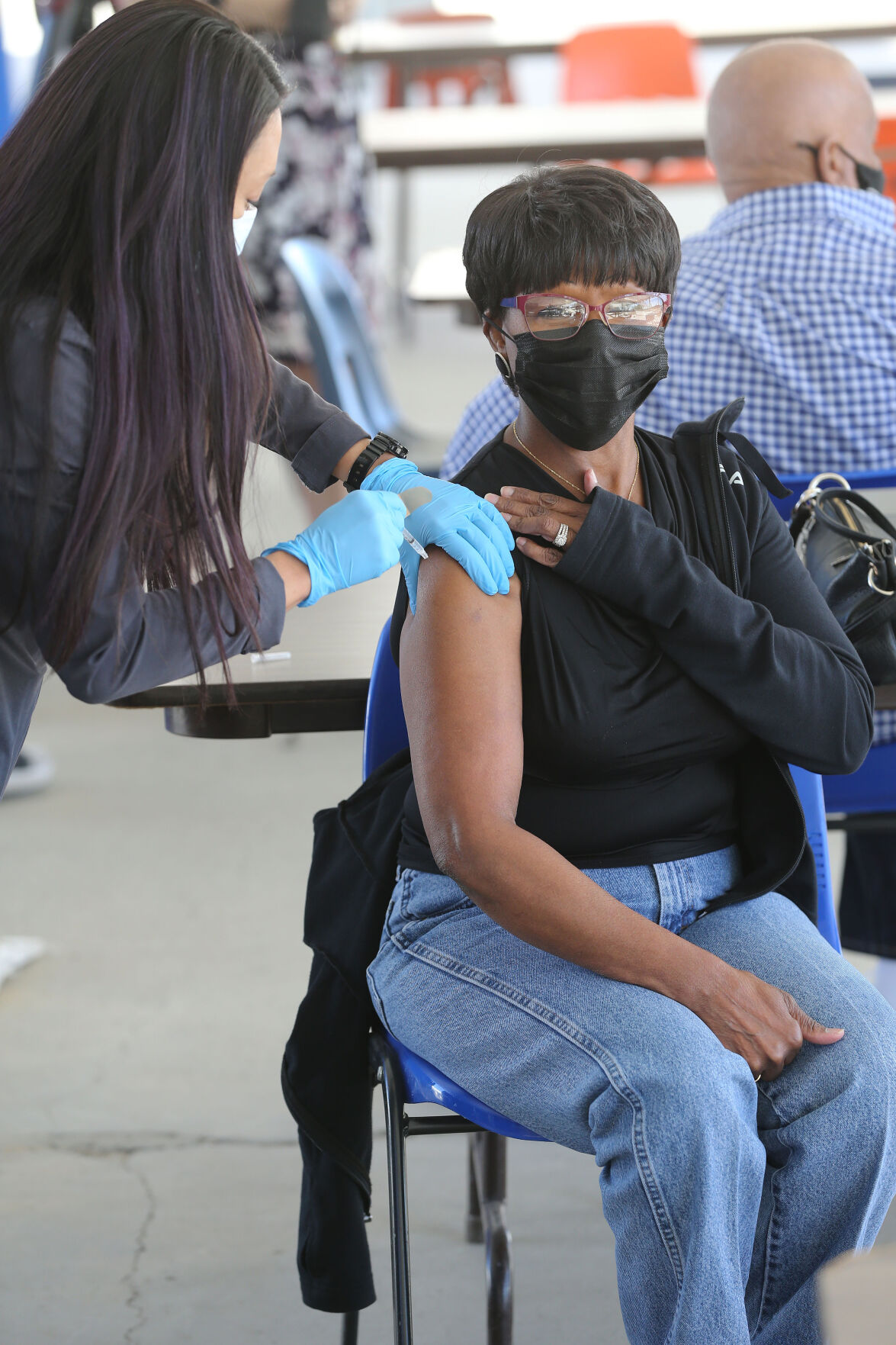 Evelyn Boyd holds up her sleeve for licensed vocational nurse Jasmin Kraft to administer the second dose of her COVID-19 vaccine on Tuesday morning at the Kern County Fairgrounds on March 2.

Effie McQueen, a sixth-grade teacher at Centennial Elementary School, celebrated her vaccine at a photo booth set up in the waiting area of the gymnasium at Rosedale Middle School on Feb. 23.

Evelyn Boyd holds up her sleeve for licensed vocational nurse Jasmin Kraft to administer the second dose of her COVID-19 vaccine on Tuesday morning at the Kern County Fairgrounds on March 2.

Vaccine eligibility in California is scheduled to dramatically increase in the coming weeks following an expected increase in supply.

On April 1, individuals over 50 years old will become eligible. On April 15, eligibility will expand to everyone over 16.

“With vaccine supply increasing and by expanding eligibility to more Californians, the light at the end of the tunnel continues to get brighter,” Gov. Gavin Newsom said. “We remain focused on equity as we extend vaccine eligibility to those older than 50 starting April 1, and those older than 16 starting April 15. This is possible thanks to the leadership of the Biden-Harris Administration and the countless public health officials across the state who have stepped up to get shots into arms.”

In advance of an assumed surge in appointments, Kern County Public Health Services encouraged local residents with severe medical conditions to sign up for appointments soon. The group is currently eligible and may find it difficult to compete with the additional groups seeking vaccines in April.

For residents seeking assistance, the department pointed to the Public Health Call Center, which can be reached at 661-321-300 from 8 a.m. to 5 p.m., Monday through Friday.

“Our goal is to remove any barriers our residents may face as they seek to schedule their COVID-19 vaccination appointments,” Kern Public Health Director Brynn Carrigan said in a news release. “Our call center is equipped with staff who are knowledgeable and eager to assist our community.”

California expects to be issued 2.5 million doses per week in the first half of April and more than 3 million doses in the second half, the governor’s office reported in a news release. That is an increase from the 1.5 million doses the state now receives on a weekly basis.

The state currently has the capacity to administer 3 million vaccines per week, and is aiming to deliver 4 million per week by the end of April.

In Kern County, vaccination efforts have been increasing as well. Bakersfield College will hold its second drive-thru vaccination clinic on Friday and Cal State Bakersfield recently opened a vaccination hub capable of administering 38,000 doses per week. That’s on top of the mass vaccination site at the Kern County Fairgrounds capable of delivering another 5,000 per day.

"Bottom line, the faster we get people vaccinated, the more lives we save and the more hospital capacity we preserve," Supervisor Mike Maggard said in a statement to The Californian. "Our vaccine allotment this week is only 17,000, where four weeks ago we received 30,000. Any news that signals more vaccinations are on their way to Kern County is welcome news."

In its news release, the governor’s office also reaffirmed its commitment to reach hard hit, poor areas of the state. In Kern County, those areas would include communities such as Wasco, Delano, McFarland, Shafter and Arvin.

"That means peace of mind for a majority of our Wasco families," said Wasco Mayor Alex Garcia. "Anyone can go ahead and get access to it, which means folks can return to backyard parties, hanging out with their loved ones, and most importantly, embracing those they love."

The state claims poor zip codes receive double the amount of vaccines as other areas of the state to reflect a higher number of deaths in those regions. Moving forward, the governor’s office said that effort would continue.

“We are even closer to putting this pandemic behind us with today’s announcement and with vaccine supplies expected to increase dramatically in the months ahead," California Health and Human Services Secretary Dr. Mark Ghaly said in a statement. "However, we are not there yet. It will take time to vaccinate all eligible Californians. During this time, we must not let our guard down. It is important that we remain vigilant, continue to wear masks and follow public health guidance."