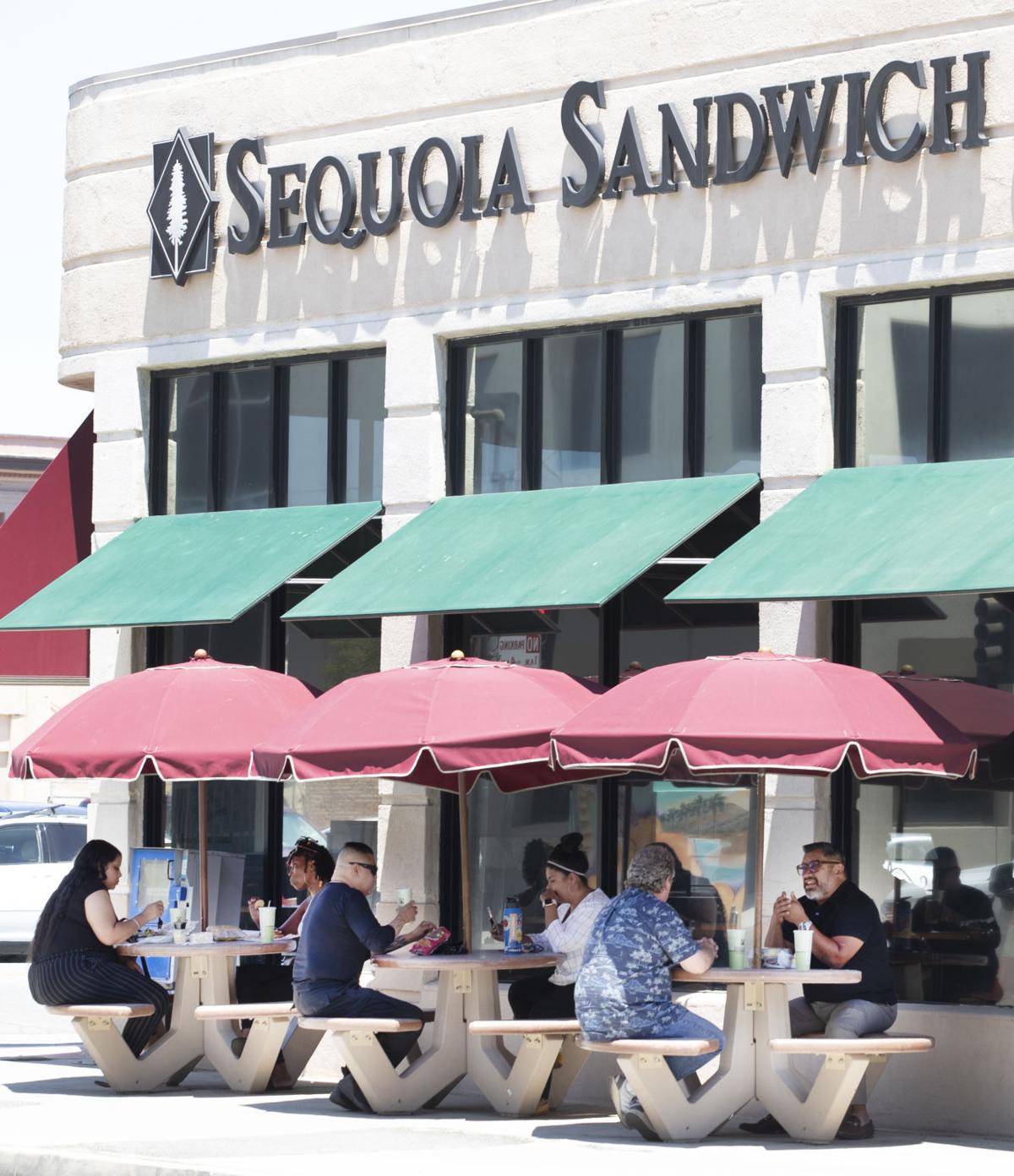 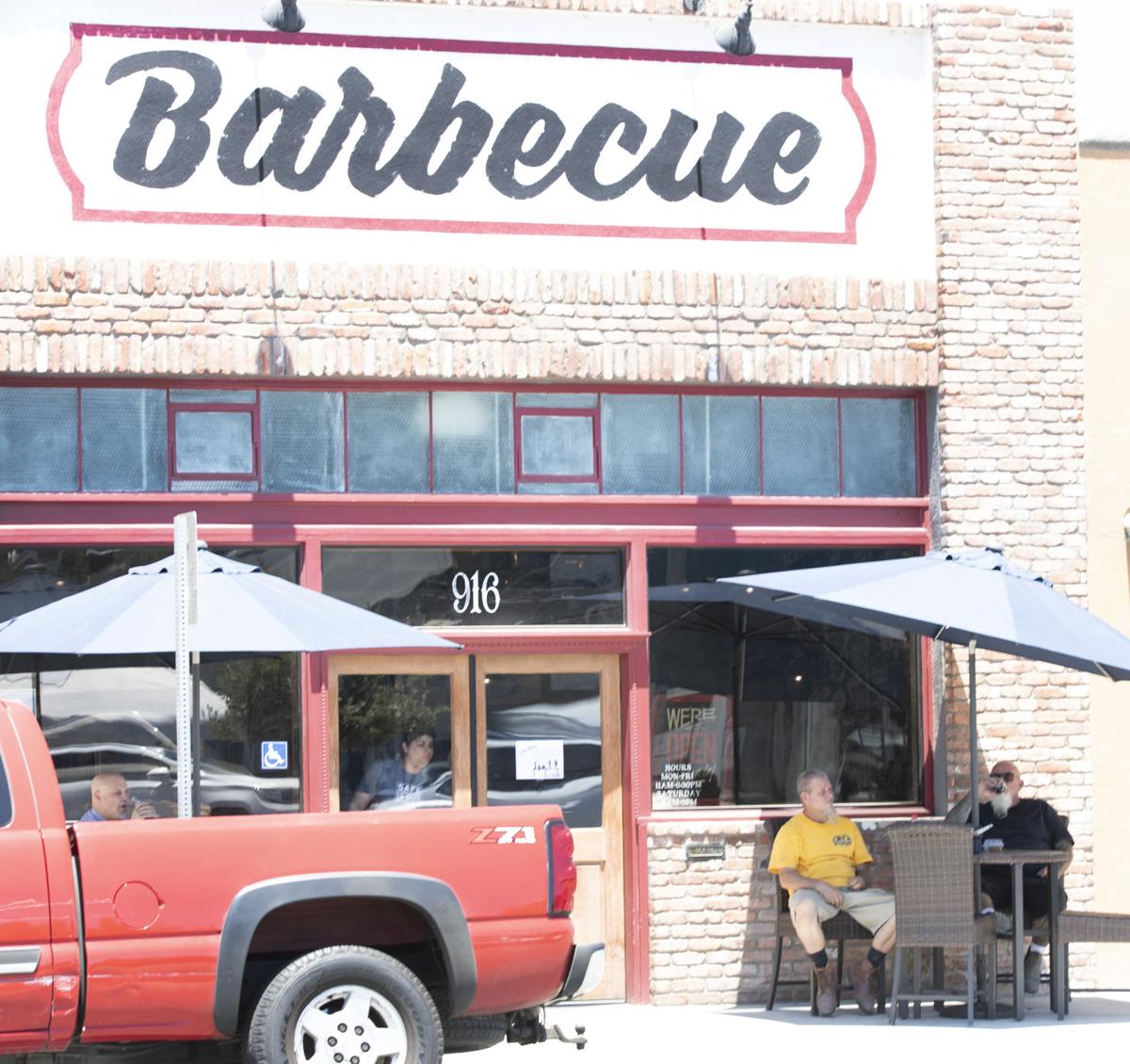 People wait outside the The Angry Barnyard BBQ Restaurant for takeout. 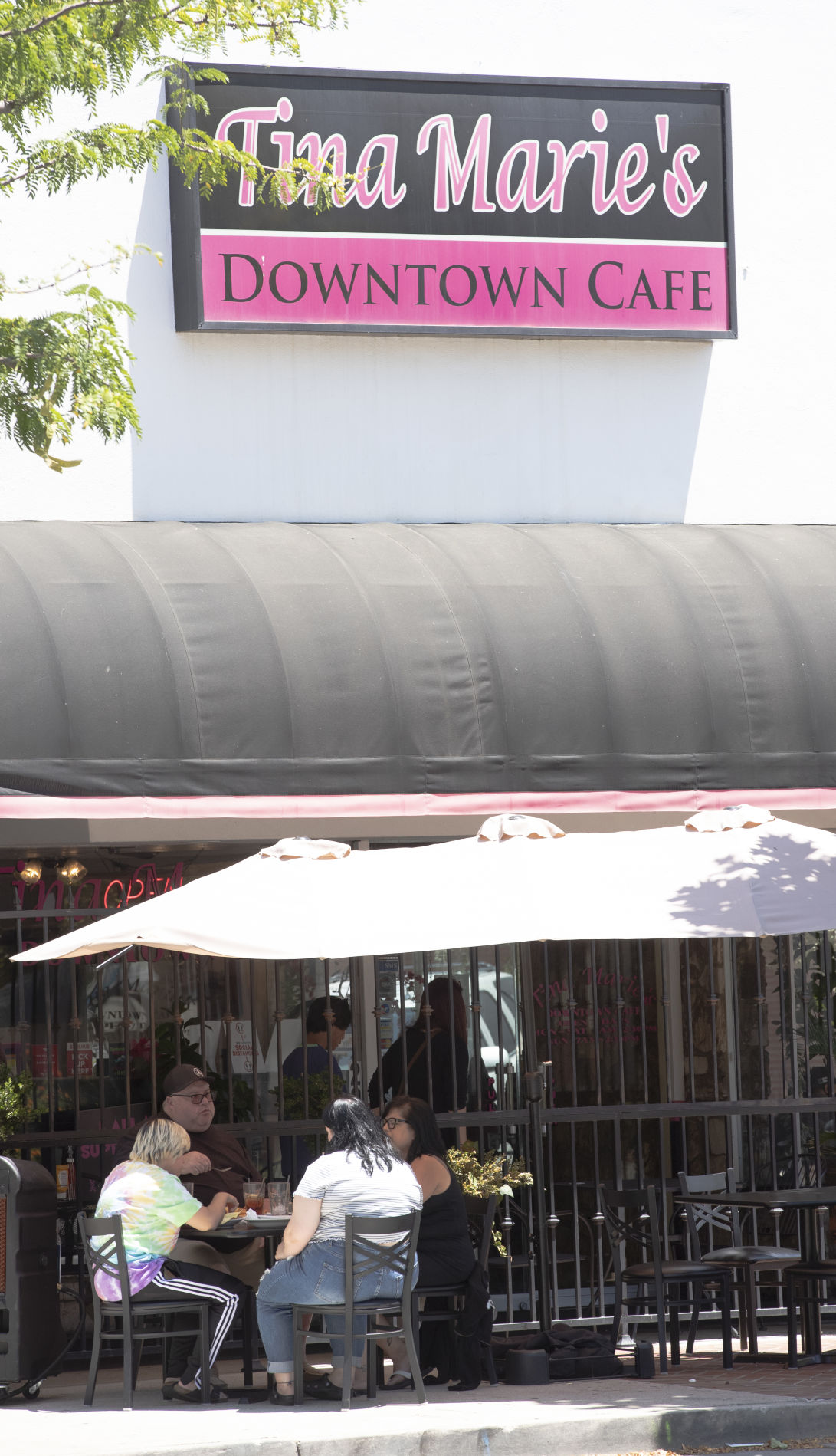 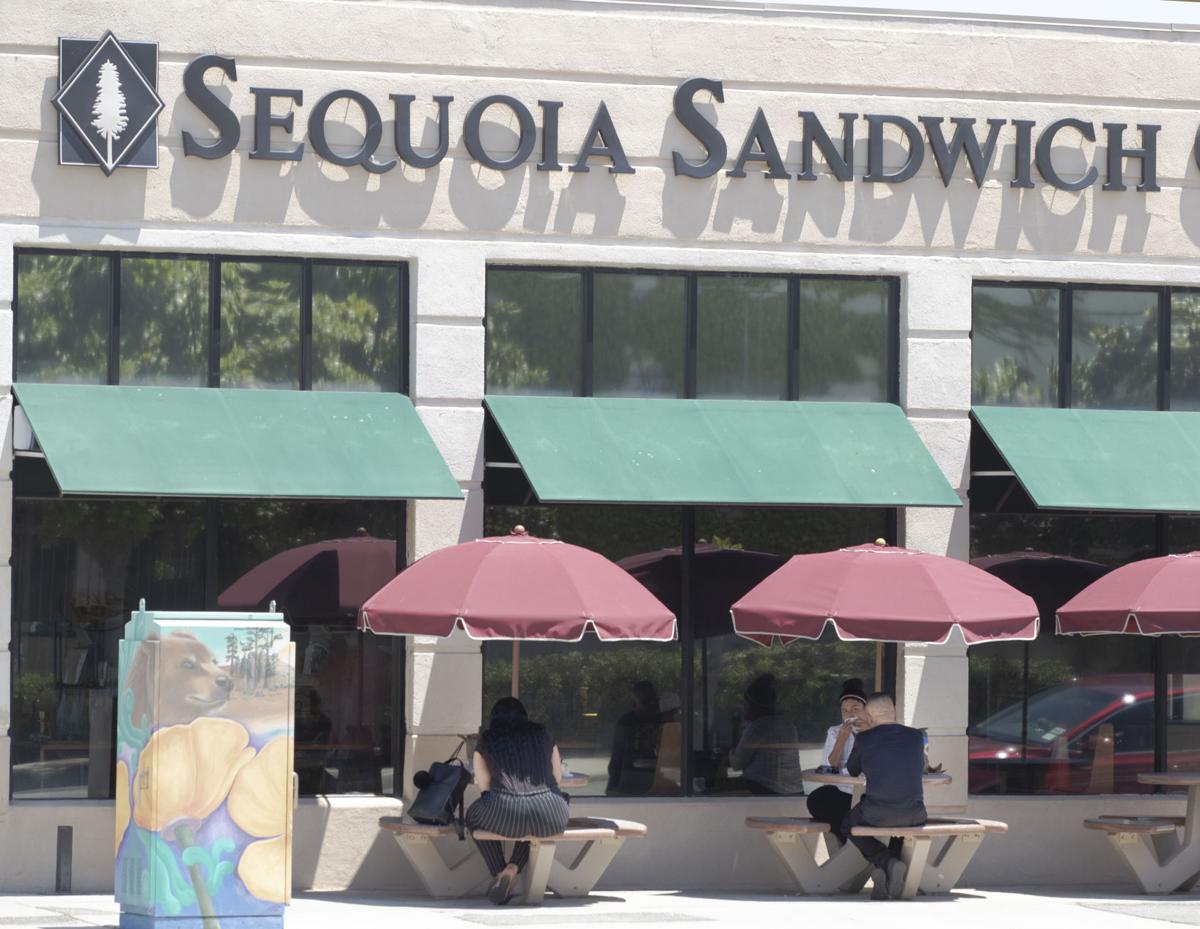 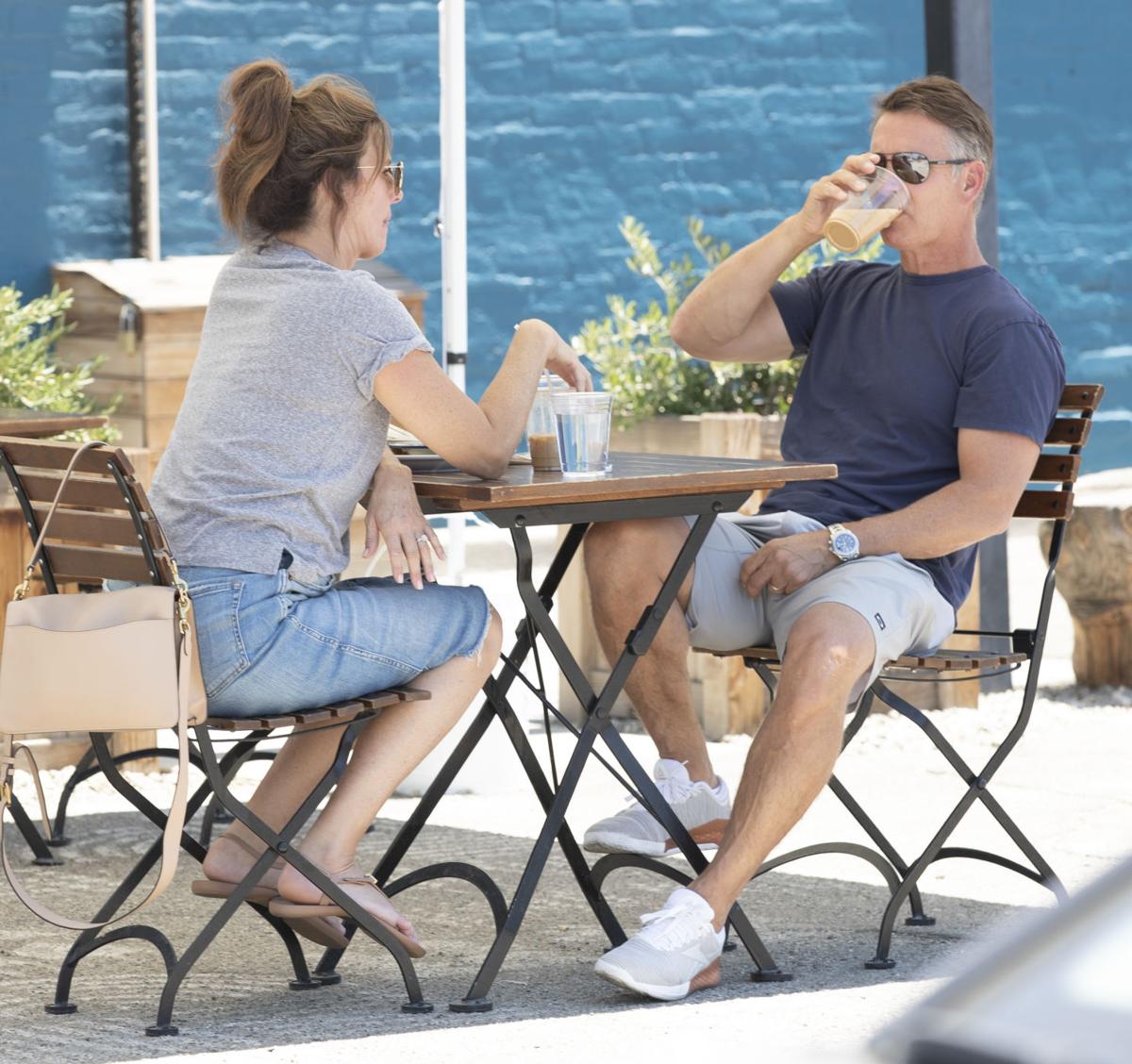 A couple enjoys a lunchtime gathering outside Smitten Cafe. 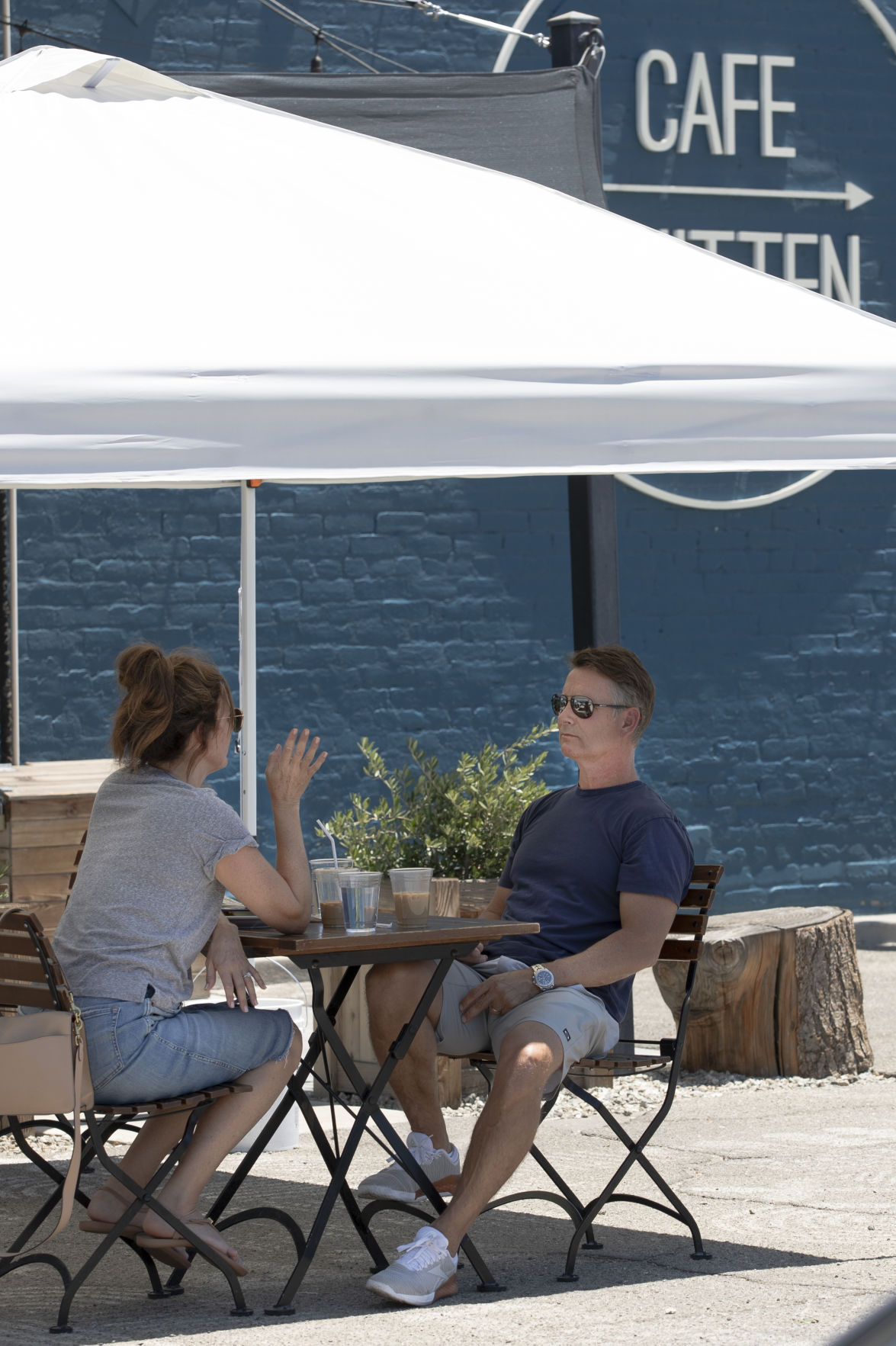 A couple visits outside at Smitten Cafe. 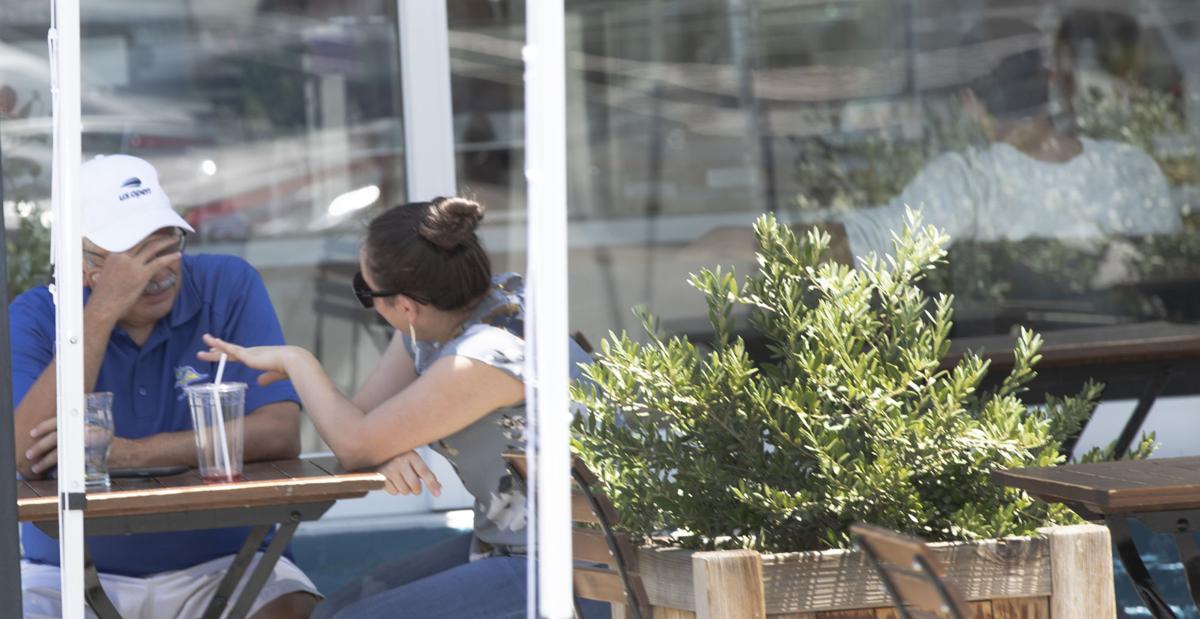 A couple visits outside while people wait inside for takeout at Smitten Café in downtown Bakersfield.

People wait outside the The Angry Barnyard BBQ Restaurant for takeout.

A couple enjoys a lunchtime gathering outside Smitten Cafe.

A couple visits outside at Smitten Cafe.

A couple visits outside while people wait inside for takeout at Smitten Café in downtown Bakersfield.

There's generally a caveat when people explain how much they enjoy dining outside in triple-digit weather.

For example, Bakersfield resident Toni Armstrong was eating lunch with her sister on the sidewalk outside Sequoia Sandwich Co. Tuesday. She said it was nice seeing fellow diners in the same way that it's fun going to the bank lately.

"It's pleasant only because we've been stuck inside the house," she said.

Fair enough: Depending on where you eat there may or may not be fans, chillers and misters to cool off patrons trying to enjoy a rare meal outside. But the consensus seems to be that it beats staying cooped up in the dining room again.

Armstrong's sister and lunch companion, Tonisha, figured the high heat wasn't all that bad. It was a small price to pay, she said, for an experience that felt traditional somehow, especially with classical music being piped in and a full view of downtown life.

With restaurants unable to offer indoor dining these days because of the pandemic, more and more are turning to an alternative offered by City Hall on an expedited basis.

By the end of the day Tuesday, nine restaurants had won permission to expand their dining rooms onto surrounding sidewalks, parking lots and streets. City officials said two more are on the cusp of receiving permits and three others will likely get approval soon.

The idea was to widen access to an option that's normally available only during special events, Assistant City Manager Jacqui Kitchen said by email. She noted that applications cost $86 and approvals are good throughout the pandemic, however long that takes.

"The city recognizes how important it is for our local businesses to expand outdoors, especially in light of the latest state orders in June which have once again closed indoor dining options," she said.

Added city spokesman Joe Conroy, "We want to be as business-friendly as possible and this expedited process we hope helps them hang on long enough to see the end of the pandemic."

The first restaurant to receive one of the permits was Tina Marie's Downtown Cafe. Owner Tina Brown said outside dining now comprises 80 percent of her business, despite the recent heat.

It helps that she's set up large chillers and fans that keep customers cool.

"It's better than I thought it would be," she said. "People are still coming out." She added that dining in the mornings is a particularly pleasing time to eat out lately.

One of her customers, Vickie Mondragon, said something similar. She prefers eating inside but said it's so nice getting out that she's made a habit of joining a companion for lunch.

Not that it's the same everywhere. Mondragon recalled dining outside on a recent morning and rushing to finish up because the restaurant had no fans, coolers or misters.

But she said Tina Marie's doesn't have that problem.

"It's better than nothing, I'll tell you that," she said.

Outside dining has become an important part of operations at Cafe Smitten. Manager Brian Yanez said business is definitely down but some customers are glad to have the opportunity to return to a business that had become part of their daily routine prior to California's March 19 stay-at-home order.

The important thing now is keeping diners comfortable, he said, through the use of fans and misters. While not everyone is up for dining al fresco — and the restaurant offers takeout for them — some loyal customers like it.