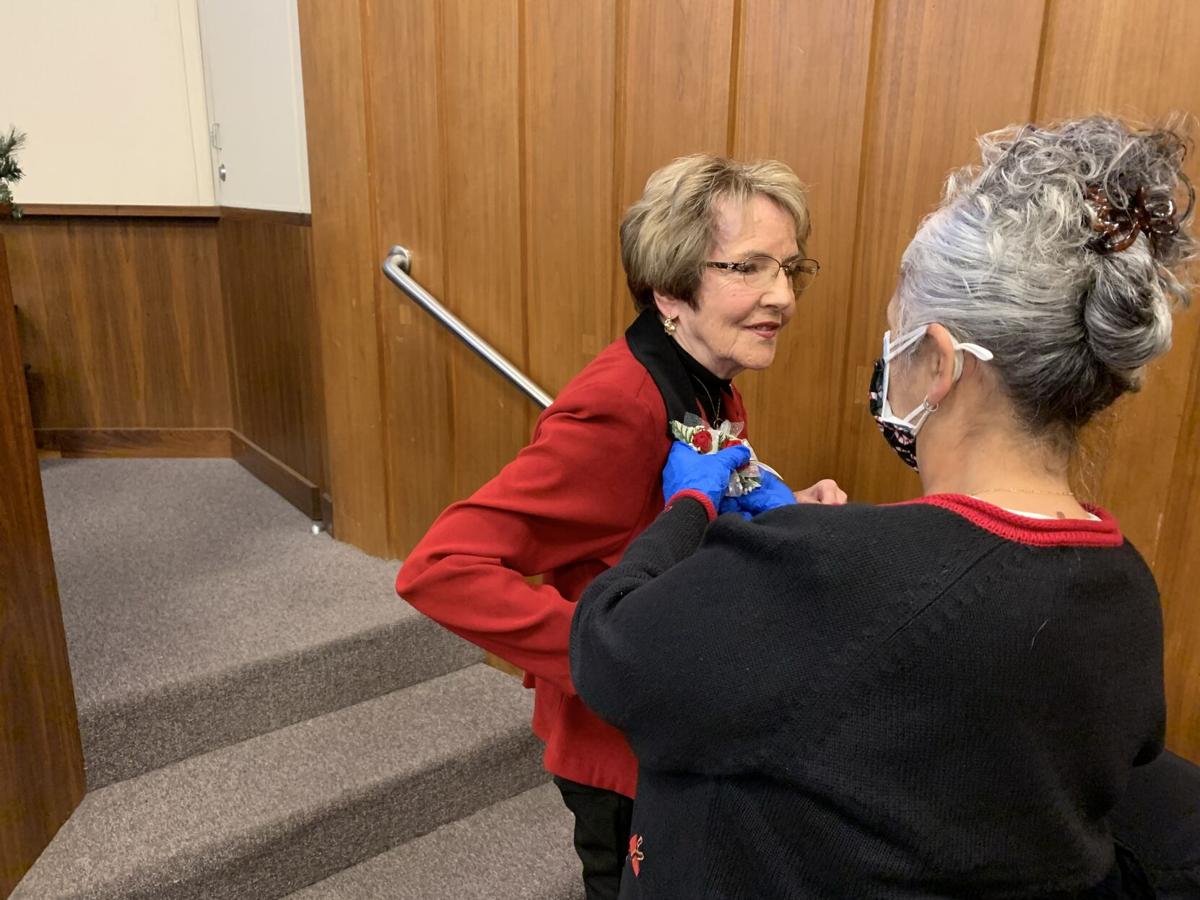 Councilwoman Jacquie Sullivan has a decorative pin attached to her shirt before the start of her last City Council meeting on Wednesday. 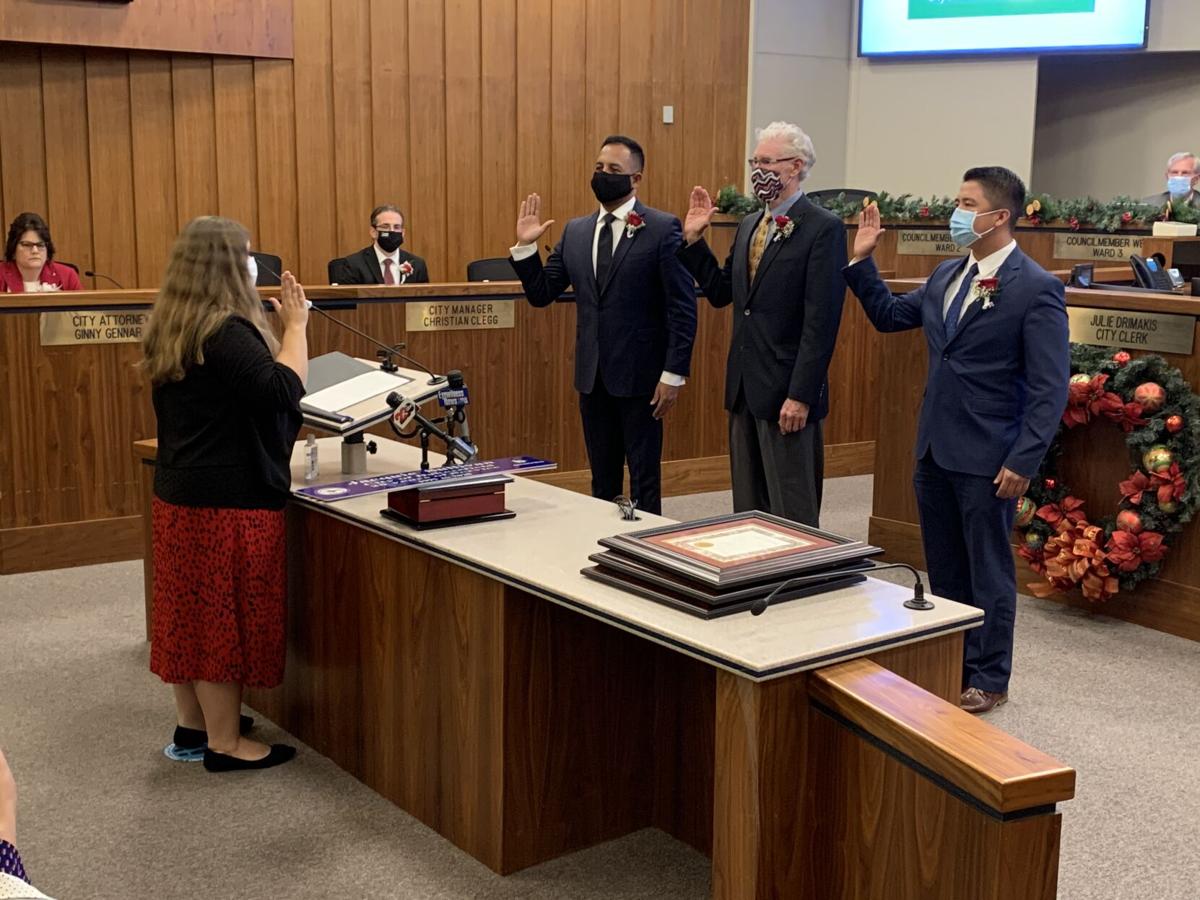 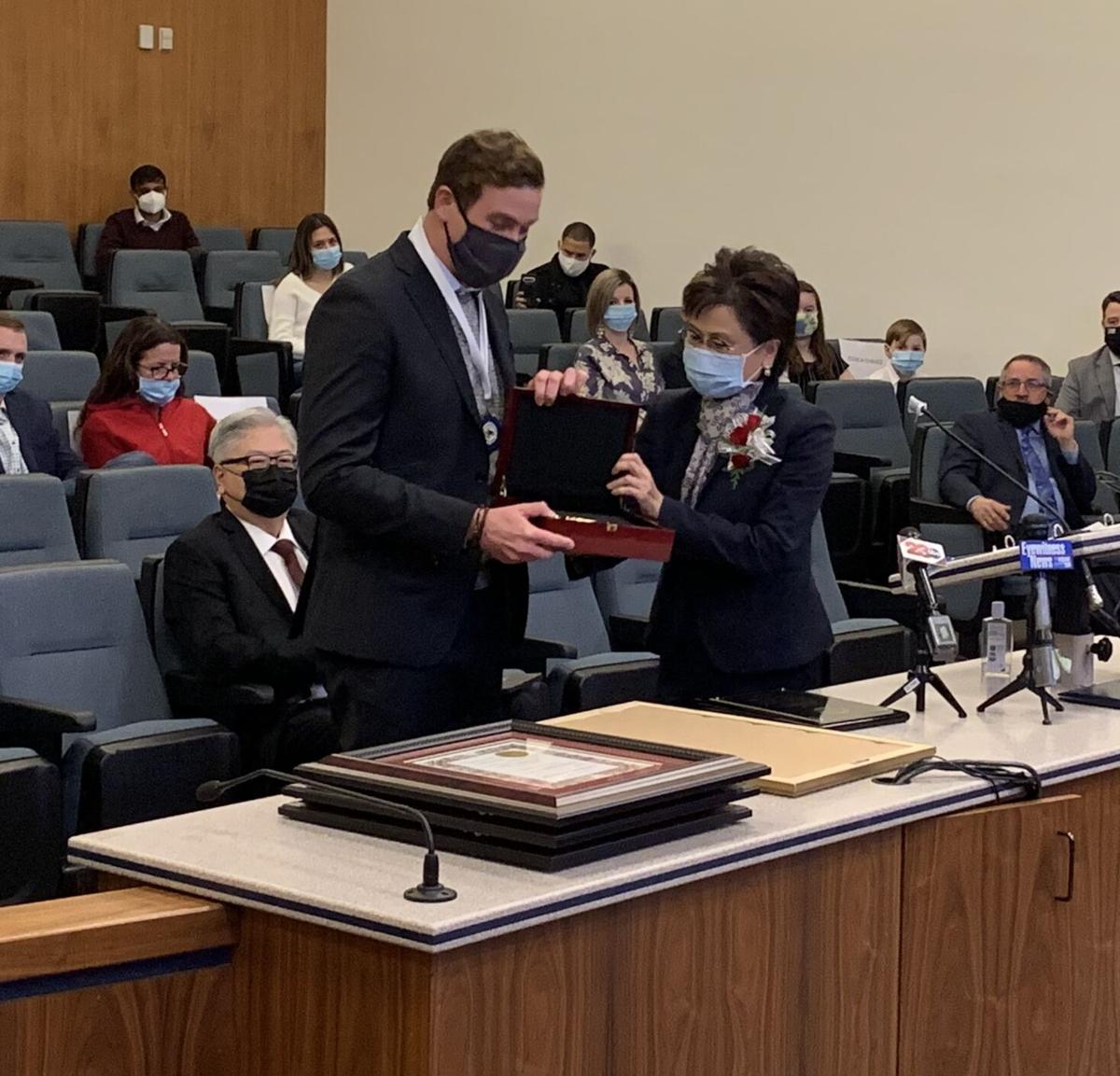 Willie Rivera looks at a key to the city delivered by Mayor Karen Goh during a City Council meeting on Wednesday.

Councilwoman Jacquie Sullivan has a decorative pin attached to her shirt before the start of her last City Council meeting on Wednesday.

Willie Rivera looks at a key to the city delivered by Mayor Karen Goh during a City Council meeting on Wednesday.

It was a night of hellos and goodbyes at the Bakersfield City Council meeting on Wednesday.

Longtime Councilwoman Jacquie Sullivan participated in her last votes after 25 years of service. She left, along with seven-year veteran Willie Rivera, who resigned from his seat before his term was up to focus on a new job with Aera Energy.

In their places will be two new faces. New Ward 1 Councilman Eric Arias was sworn in, along with returning incumbents Andrae Gonzales and Bruce Freemen. Ward 6 Councilwoman Patty Gray, who is replacing Sullivan, missed the meeting due to an illness and will be sworn in at a later date.

But the star of the night was Sullivan, who served on the only female-majority council at the beginning of her tenure. On her last night, Sullivan was laden with accolades, including a key to the city and a red white and blue Buck Owens guitar from KUZZ.

“This is a very emotional night for me,” she said to the limited attendees in the Council Chambers. “I feel a little weepy, not in an unhappy way, but not in a happy way. But just deeply moved and I’m thankful to God for giving me this wonderful privilege, wonderful opportunity.”

Known primarily for leading the movement to place “In God We Trust” into the Council Chambers and beyond, Sullivan was part of a conservative block of councilmembers throughout her service. During the meeting, her colleagues noted her gentle doggedness that allowed her to go toe-to-toe with some of the big egos that come before the council.

“Truly local government, city and county government, is where we can make a difference,” Sullivan said.

Also stepping aside was Rivera. The youngest member of the council when he was elected in 2013 at 22, he made Ward 1 improvements a signature of his career. The ward has been described as neglected, and Rivera made fixing up certain parts of the area a priority.

“I know that the city is in very good hands,” he said during the meeting. “I am very excited at the prospect of another young man sitting in this chair.”

That young man, Arias, works as a field representative for State Assemblyman Rudy Salas, who was on hand Wednesday to cheer on his staffer and say goodbye to Sullivan and Rivera.

“Today, it is the honor of my lifetime to take this oath to serve my city as the first Filipino councilman here in the city of Bakersfield,” Arias said. “Although it brings me great excitement to be taking on such an important role in government, it goes without saying that this job will certainly come with its challenges.”

For Sullivan and Rivera, a post-council life has begun. But Arias, along with the six other councilmembers, will face those challenges in the new year.