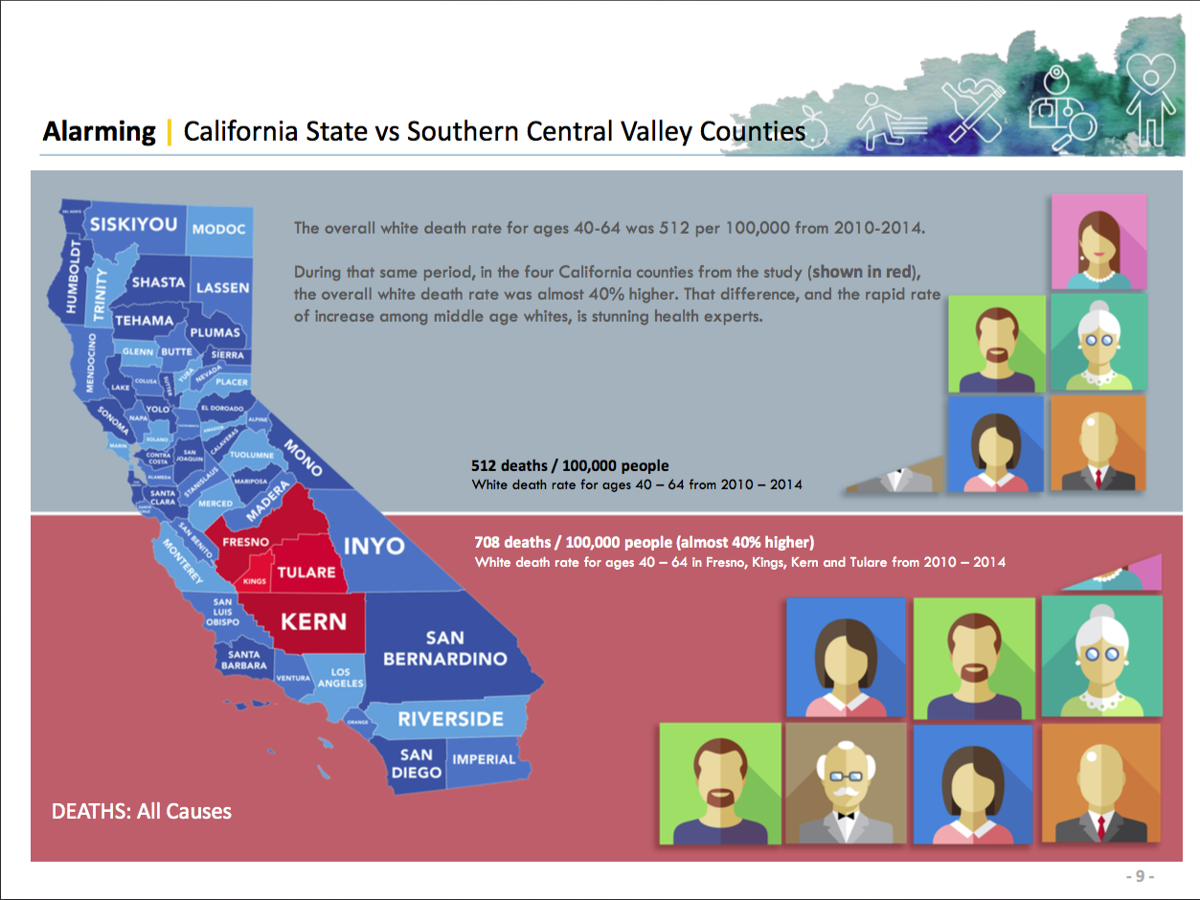 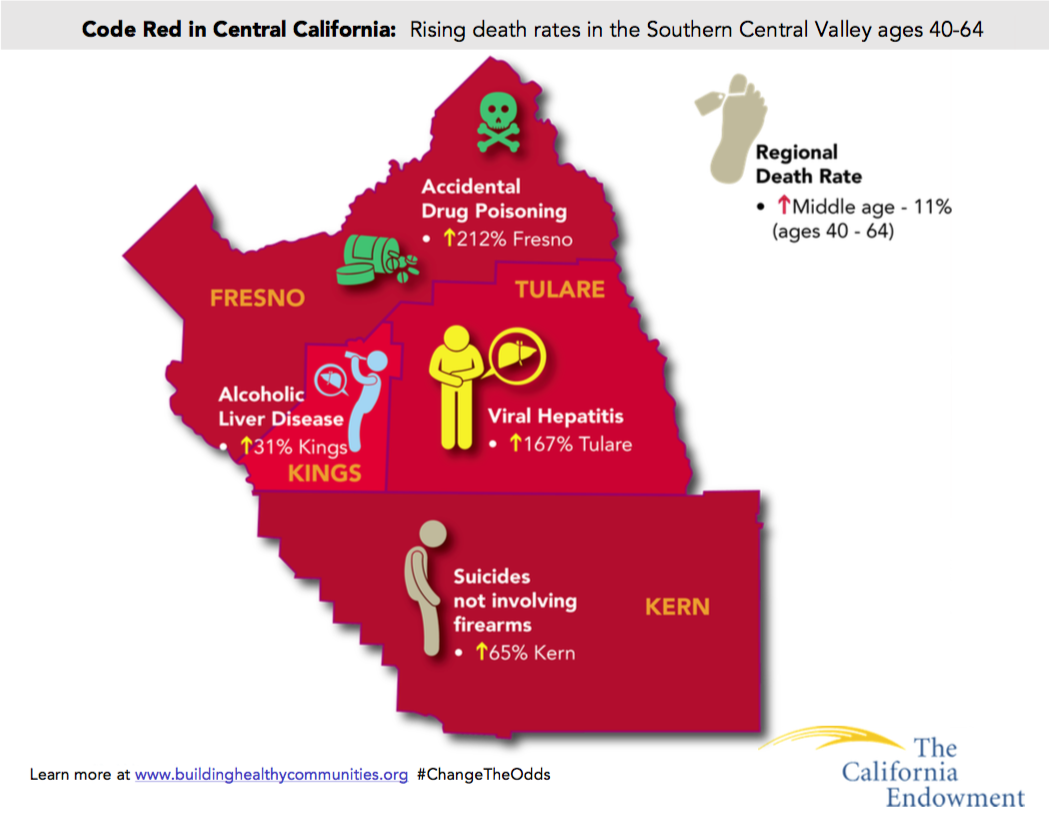 An invisible disease has been killing middle-aged white people throughout the southern San Joaquin Valley at higher rates than ever before.

The disease can’t be detected by a blood test or remedied with a prescription. It’s been referred to as one of the country’s greatest unaddressed public health crises and a rising “epidemic of white death.”

The disease is toxic stress, a result of childhood trauma and other environmental stressors like poverty, food insecurity and basic living needs not being met.

And according to a report released Wednesday by The California Endowment and the Center on Society and Health at Virginia Commonwealth University, it's most pervasive in Kern County, setting those it impacts on a course of alcoholism, drug abuse, depression and suicide.

Among the key findings:

The rising death rates throughout Kern, Kings, Fresno and Tulare counties — among the poorest statewide — are unprecedented, preventable and driven by despair, according to the report.

The study suggests the economics of the region are driving increased rates of suicide, drug overdoses, alcoholism and depression, backing up studies suggesting that geography, not genetics, determines life expectancy.

“Household incomes have been stagnant and poverty rates have been climbing in these counties over a period of many years,” said Dr. Steven Woolf, one of the lead authors of the report. “Stress, anxiety and depression are taking their toll on this population. The economy is literally costing lives.”

Meanwhile, suicide rates — which the study indicates are suggestive of persistent economic stresses — have been skyrocketing in the southern Central Valley. Suicides involving strangulation, suffocation and hanging grew 121 percent between 1995 and 2014, and 133 percent in Kern and Tulare counties.

“These are people who feel they’ve lost their shot at the American Dream. They’re losing hope. People who lose hope become depressed, turn to tobacco, drugs or alcohol for relief or commit suicide in desperation,” Dr. Tony Iton, a senior vice president with The California Endowment, said during a state Senate Health Committee hearing Thursday. “These are deaths of despair.”

The Endowment is a private statewide health foundation established to expand access to quality healthcare for people in underserved communities.

The report underscores data released by the California Department of Public Health in November showing that Kern County mothers have experienced more childhood trauma and hardship than mothers anywhere else in California, potentially setting their kids on a path of physical, mental and emotional health problems later in life.

Anticipating changes to the Affordable Care Act under the Trump administration, Iton told state senators this week that any weakening of the “healthcare safety net” could have severe consequences for the Central Valley because toxic stress and ACEs run rampant in the region.

“These causes of death scream out for a deeper investment in mental healthcare, substance abuse treatment and behavioral healthcare, all of which are covered under the Affordable Care Act and Medi-Cal,” Iton said.

Despite that, and despite the disease’s apparent stranglehold on the region, Kern County has no organized public health strategy to address the surge that Iton describes as unprecedented.

“While most of our clients have gone through stressful or traumatic childhood experiences that affect them in their adulthood, we don't have a specific grant or program that addresses this,” Michelle Corson, spokeswoman for the Kern County Department of Public Health Services, said in December.

“Some of our staff have been trained on the Adverse Childhood Experiences, and are very familiar with this concept. With the information, for instance, we empower our clients to seek immediate help when they are in a domestic violence relationship so that their children are not exposed to a toxic environment.”

Responding to The California Endowment’s report, Fresno County health officials said in a statement that any increase in premature, preventable death rates are “a cause for concern” and that “significant and concentrated poverty (and the disadvantages in the social and physical environment that this incurs) in Fresno County and the Southern San Joaquin Valley contribute to a multitude of chronic illnesses that lead to premature death.”

Although healthcare is not the only solution to the emerging health crisis, it is “the cornerstone” in supporting those impacted, Iton said. Refocusing public policy could ease the crisis, Iton said.

Addressing the issue requires a multi-faceted approach, the report states.

Medical providers must expand coverage and connect residents to medical homes and behavioral health services; legislators must create policies to improve the state and local economies while increasing wages and reducing economic inequality; and the entire “social safety net — from access to food to access to high-quality childcare — needs to be strengthened,” the report states.

“These statistics are driven by policies that are made, and in many cases it’s the absence of policy, and we’re working hard together to try to solve these problems,” Iton said during the senate hearing. “But this phenomena is nationwide and we need the federal government to recognize this when they’re making policy.”

Well, now that the source of all of our stressors is officially gone...... We wont need treatment!

White people only in the central valley are having issues. seem like their fine everywhere else. Maybe you need to check and see what your local,State and National representatives are not doing for ya!

The entire state of California needs to stop goving out $ and other benefits to all the illegals and start focusing on the fact that by making it easier for people that are breaking the law by being here for one, as well as able to work illegally and tax free which has a affect on the economy and hurts people that are citizens trying to earn a living. Middle aged white men and women lose jobs to illegals which cause them to struggle finacially and eventually turn to crime and drugs which negatively impacts everyone. The U.S. also gives out $ to immigrants from other countries to start businesses, or other types of assistance including medi-cal, and foodstamps. These people then start their bussinesses here and earn $ but what happens ..? Many send this $ back to family in foreign country. While the people that are citizens struggle to get jobs and provide for their families bcuz many employers would rather employee the person that will work under the table for less. We need to start taking care of our people first and make sure that our economy is what is growing ....not foreign countries! We also need to stop making EVERYonE that is here no matter status able to get the benefits that all individuals receieve. Give the jobs back to Americans first...and then we can worry about helping others!! All middle class means these days is that u earn too much to get assistance and too little to live the American dream, own a home, and have a family that you are able to provide for. It seems like a solution to this should be a No Brainer to policy makers!!

White people are actually having adverse outcomes due to these policies...lets care about them, now...

"Most troubling is that toxic stress seems to be impacting young white men in Kern County at higher rates than before. Almost 210 per 100,000 young men ages 25 to 34 died between 2010 and 2014, a 29 percent spike over rates between 1995 and 1999."
So who was running this country during those years?
Oh that's right this statistic is for "white people", never mind.

Check with your local representatives. White people in the rest of the country is doing fine.