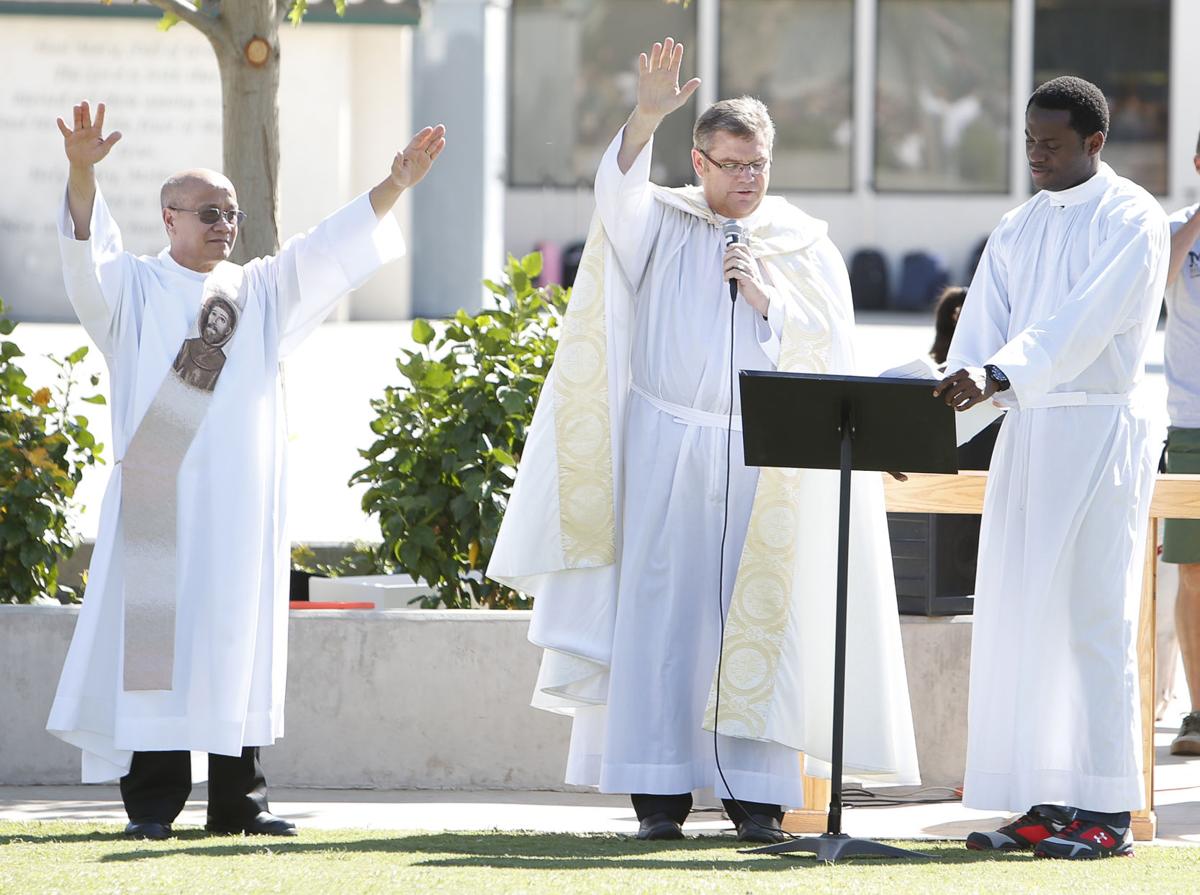 In this file photo, Deacon Van Tran, Msgr. Craig Harrison, center, and Seminarian Athanasius Okure pray over the pets at the Blessing of the Animals at St. Francis School. 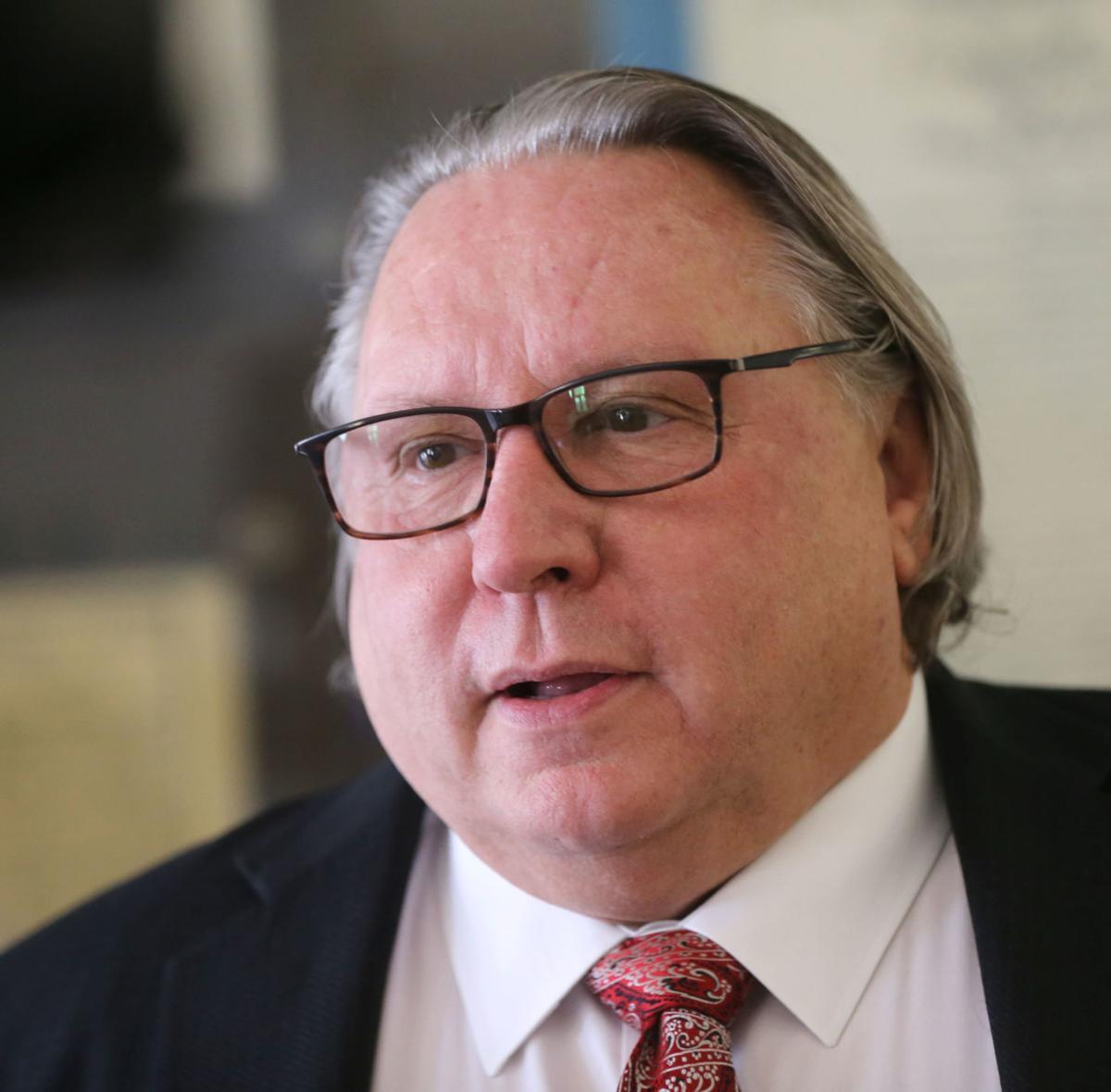 In this file photo, Deacon Van Tran, Msgr. Craig Harrison, center, and Seminarian Athanasius Okure pray over the pets at the Blessing of the Animals at St. Francis School.

When a celebrity priest is accused of sexual misconduct, where does the line between defending a beloved pillar of the community end and intimidation of an accuser begin?

The question came up this week after Monsignor Craig Harrison of St. Francis Church was placed on paid leave by the Roman Catholic Diocese of Fresno after it received an allegation earlier this month that Harrison inappropriately touched an altar boy when he served at a church in Firebaugh, northwest of Fresno, years ago. That same day the diocese received a second report of alleged abuse by Harrison, diocesan officials said Saturday, this time at a church in Merced in the 1980s.

The initial allegations reverberated throughout the St. Francis congregation and the greater community — where Harrison has long been a fixture of goodwill, faith and homegrown pride. Immediately, hundreds posted messages of support for Harrison on social media.

Some posters questioned the accuser's motives, and why he waited so long to come forward. Others compared the situation to an attack by Satan.

Fellow local priest Monsignor Perry Kavookjian of St. Elizabeth Ann Seton posted a Facebook message saying, in part, the idea Harrison would "take advantage of a minor is beyond credibility."

"May you be delivered from this burden and continue your untiring work for Jesus Christ our Lord and His people," read another comment by Monsignor Scott Daugherty of St. Anne's Parish in Porterville.

How is this seen through the eyes of a potential victim?

"Imagine for a minute that you’re a 12-year-old Fresno child who is being abused, right now, by your coach or uncle or teacher. And then you see a priest publicly defending an accused predator, calling that accuser 'beyond credibility.' Think you’ll speak up and stop your abuse?" asked Daivd Clohessy, the former director of the Survivors Network of those Abused by Priests.

Clohessy said Kavookjian should apologize and diocesan officials should issue a reprimand for his comments.

His message "depresses and scares victims, witnesses and whistleblowers into staying silent."

Victims might think: "What’s the use of me calling the cops or sticking my neck out? Look at how powerful adults are instantly and unequivocally rallying around this accused abuser."

Dominguez said she appreciates the concerns expressed by Clohessy.

"We don’t want anything at all to discourage anyone from coming forward," she said, adding the diocese will take steps to ensure anyone who comes forward with an allegation is respected and supported.

In February, the Fresno Diocese announced it was launching a thorough investigation and would then release a list of names of priests accused of sexual misconduct dating back to 1922. It encouraged anyone who believes they are a victim to contact the diocese.

The diocese comprises 87 parishes in eight counties, including Kern, Fresno, Tulare, Kings, Inyo, Madera, Merced and Mariposa, and it has an estimated 1.2 million Catholics. Over the years, several priests who have served at various churches in Kern County have been accused of sexual misconduct.

"We support and encourage people to come forward and we will treat them with respect and dignity and we are treating anything we receive very seriously," Dominguez said.

But Harrison's attorney, Kyle Humphrey, thinks too much credence is given to the accusers at the expense of the accused.

"Where is the concern for somebody who has been ripped from his life?" he asked.

"There is no basis in due process or in justice to believe the victim," he said. "You listen to the victim and if it can be proven, you move forward. You don’t throw away justice because someone might have hurt feelings if you don’t believe them."

Joseph George, an attorney and psychologist who has represented Catholic Church sexual abuse victims across the state, said cases of accusations against a high-profile figure often bring a strong defensive response from supporters. He recalled a case in Sacramento where supporters held a prayer vigil outside a jail where a priest was being held.

"I hope this victim has people in his corner who can advocate on his behalf and stand up to them," he said of Harrison's accuser.

He pointed to recent allegations made by a woman against former Los Angeles Lakers head coach Luke Walton, who was recently named head coach of the Sacramento Kings.

"He’s held in the highest prestige in the Lakers organization and in the NBA. But who knows what happens? What people do behind closed doors?"

As for an accuser's motives and why they wait to come forward, George said many things trigger victims to come forward later in life "but very, very few false allegations come in.

"Even the diocesan attorneys across the state and country will say they have come across very few false allegations," he said.

Often times abuse victims can't talk about their experience right away, sometimes not for years, said Jason Giffard, a licensed marriage and family therapist with the county's Kern Behaviorial Health and Recovery Services.

Sorting through trauma, shame, disappointment and feelings of betrayal can take months to years, he said.

"Especially if you’re a child trying to come out with claims of abuse or exploitation," he said, "that’s even more difficult to do."

The diocese's Dominguez said striking a balance between following the law, and respecting both abuse victims and clergy is difficult.

"We love him but the popularity of a priest doesn’t influence the diocesan response," she said, referring to Harrison. "We follow our policies and protocols and we will provide the priest respect and support; there’s not a presumption of guilt."

"But it just doesn’t matter the popularity of the priest," she said. "This is very serious and it is being taken seriously."