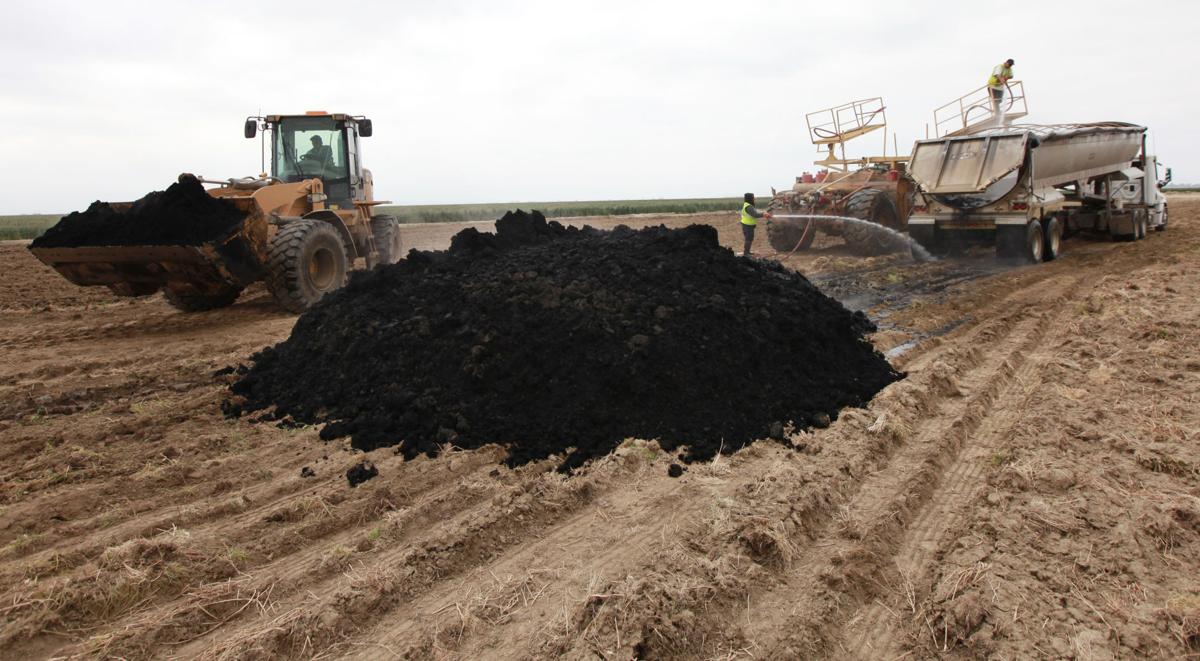 A truckload of biosolids is unloaded at Green Acres Farm in this Californian file photo. 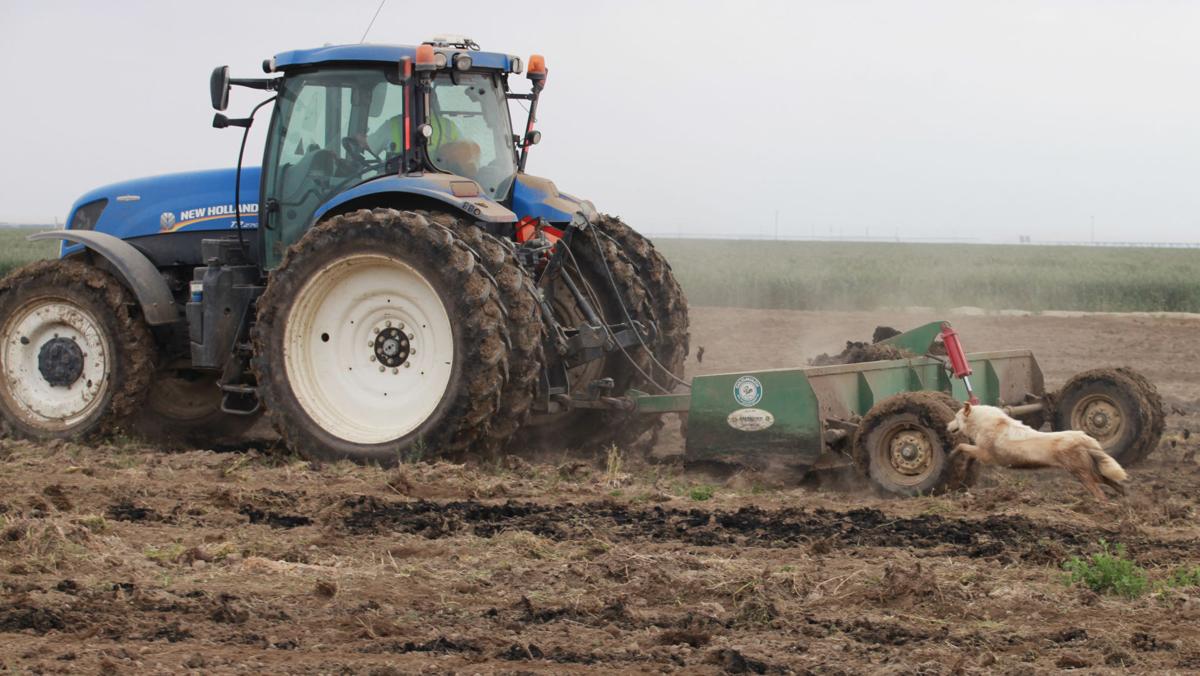 A large tractor with a box scraper works the land at a farm southwest of Bakersfield in this Californian file photo. 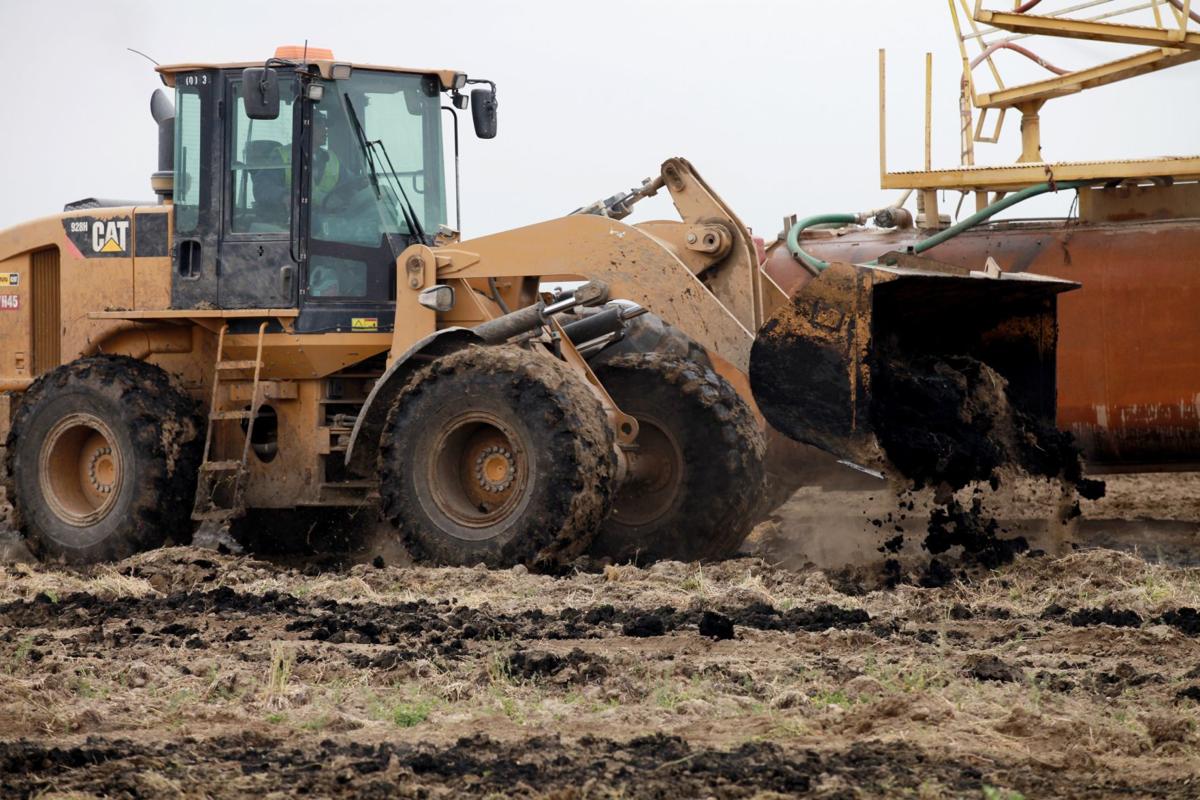 Biosolids are spread out on farmland used to grow crops by the city of Los Angeles south of Bakersfield, at the Green Acres Farm. 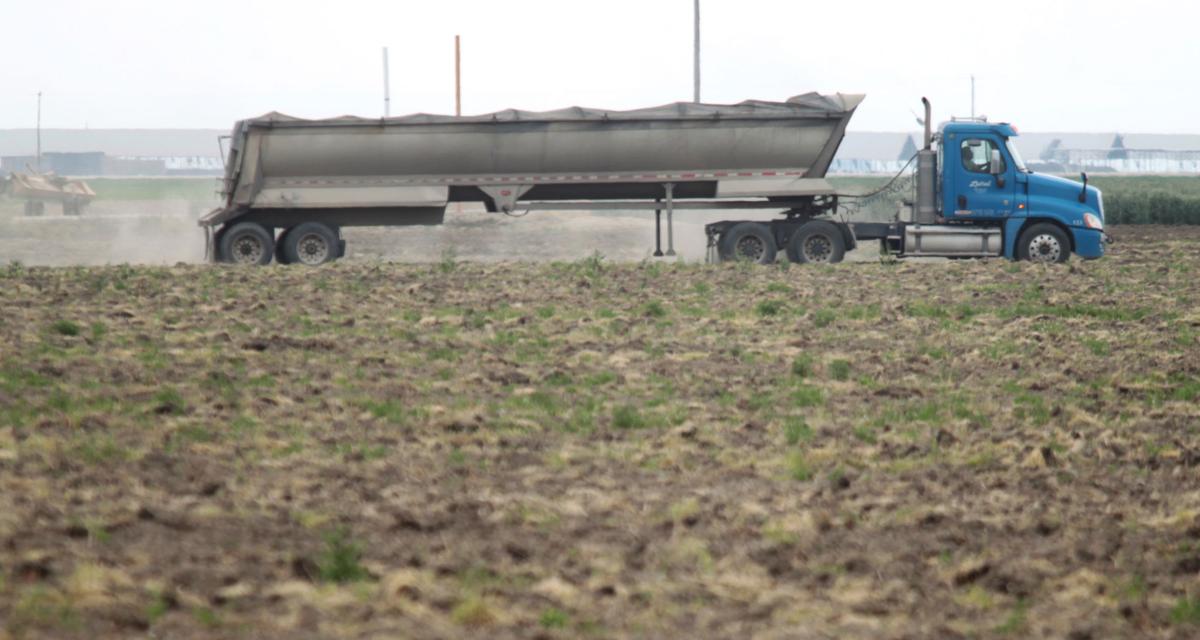 A truck delivers biosolids to be used as fertilizer on the crops at Green Acres Farm, south of Bakersfield. 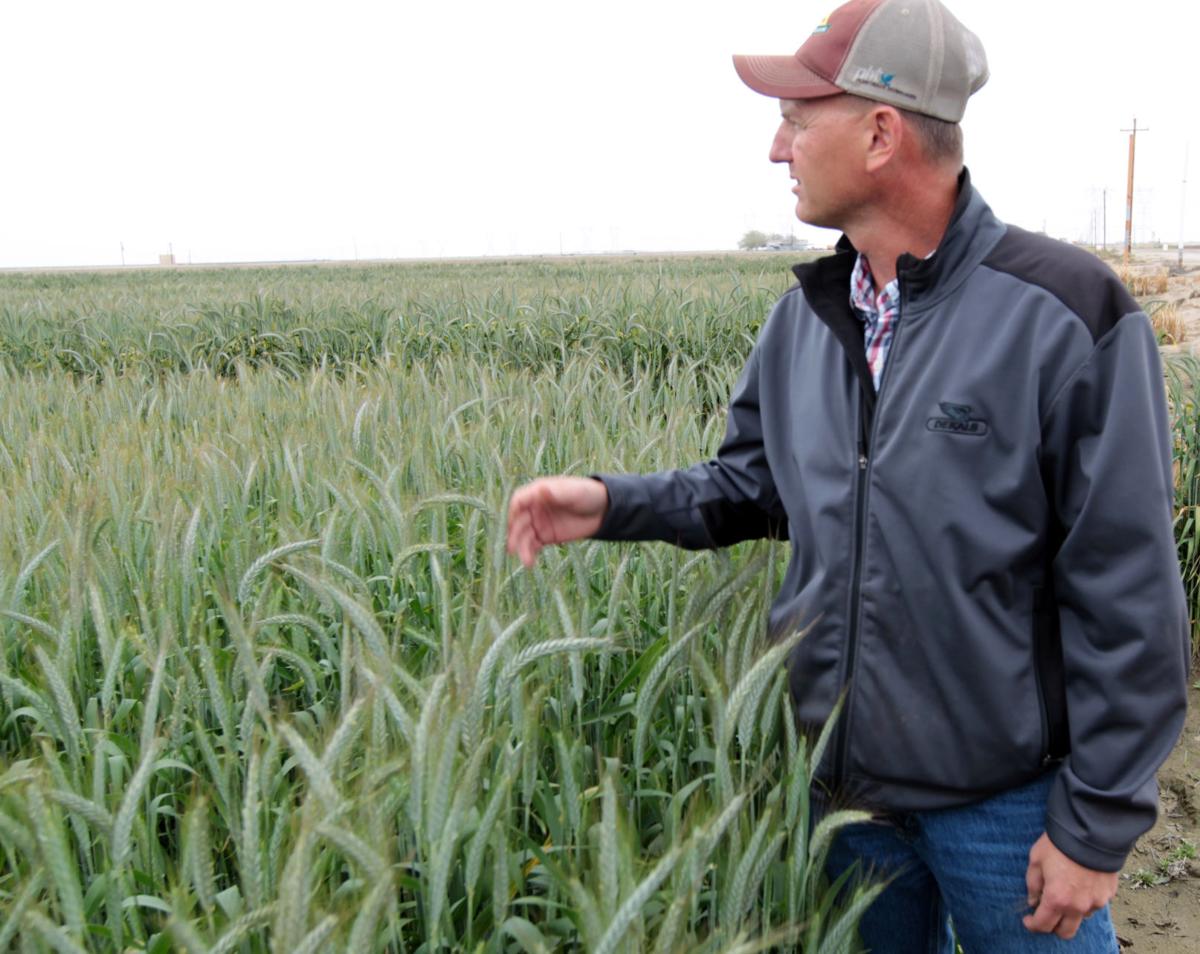 Rob Fanucchi, who manages Green Acres Farm, stands near a field of wheat grown on the property in this Californian file photo.

A truckload of biosolids is unloaded at Green Acres Farm in this Californian file photo.

A large tractor with a box scraper works the land at a farm southwest of Bakersfield in this Californian file photo.

Biosolids are spread out on farmland used to grow crops by the city of Los Angeles south of Bakersfield, at the Green Acres Farm.

A truck delivers biosolids to be used as fertilizer on the crops at Green Acres Farm, south of Bakersfield.

Rob Fanucchi, who manages Green Acres Farm, stands near a field of wheat grown on the property in this Californian file photo.

Kern County has decided to end its decade-long legal battle to defend a voter-approved ban on the land application of treated sewage sludge, settling with the City of Los Angeles.

That means the death of Measure E.

Members of the Kern County Board of Supervisors voted unanimously in closed session Tuesday to sign a deal worked out with Los Angeles that will end the long, bitter and expensive fight that started nearly 11 years ago.

Los Angeles will be allowed to continue spreading its human and industrial waste — treated to “exceptional quality” in compliance with federal environmental standards — at Green Acres Farm southwest of Bakersfield.

But the city will give up any chance it had to make Kern County pay for millions of dollars in Los Angeles legal costs, taking only $54,000 in fees from Kern County.

Most of the supervisors declined to talk about the decision Tuesday. But Supervisor Mick Gleason said there simply wasn't a win at the end of the fight for Kern County.

"We fought this as best we could for as long as we could," he said. "We are at the end."

Lawyers for the City of Los Angeles issued a statement cheering Kern County's vote and the settlement:

"The City of Los Angeles appreciates the County’s approval of the settlement. The settlement reflects that after a full trial, the court concluded that farming with biosolids is safe and beneficial.

"Both Kern County and the City will benefit from the fair and agreed resolution of this dispute, which will allow recycling of biosolids at Green Acres Farm to continue. The City Council is expected to review the settlement soon."

Measure E was passed by 83 percent of Kern County voters in June 2006.

It banned the application of treated human and industrial sewage waste — called biosolids — on open farmland.

Los Angeles, and a host of other Southern California sewer treatment agencies, sued to block the law in October of that year.

Behind in the fight, and with only a couple appeals left to it, Kern County decided Tuesday to cut its losses and make a deal.

Now county leaders will wait to see if Los Angeles and the other parties to the lawsuit will approve the deal their lawyers have crafted.

“We’ve been assured that they will,” said Kern County Council Mark Nations.

Two facts have stymied Kern County’s attempt to defend the wishes of its voters and keep Southern California sludge off unincorporated county fields.

The U.S. Environmental Protection Agency has approved the use of biosolids on farmland.

And the California Integrated Waste Management Act encourages the practice as a way to recycle the black, jelly-like material that is the end product of everything flushed down a toilet or run into an urban drain.

Kern County lawyers argued passionately that even the most highly treated sewage sludge has trace amounts of chemicals and substances that are not regulated by the EPA but could have harmful effects on humans and animals.

But Hicks noted that Kern County was unable to show, despite the decades sewage sludge has been spread on farmland in Kern County, that any human or animal has been harmed by biosolids.

The current scientific tools available to study the chemical — to detect it in the ground or water — are not enough to prove there is a danger, Nations said Tuesday.

“The science isn’t really there,” he said.

"The current science was not supporting our position," he said.

Kern County could have appealed its loss before Hicks’ bench to the 5th District Court of Appeal and ultimately the California Supreme Court.

But, Nations said, it would have been a financial risk.

“It’s futile at this point because the issues we lost on in the trial court we already lost on in the appeals court” during an earlier appeal of the case, he said.

There was no reason to think the appeals court would change its mind.

Under the settlement, it won’t have to pay Los Angeles’ legal bills as well.

“In my opinion it’s a waste of taxpayer money” to continue the fight, Nations said.

Gleason said supervisors chose not to risk more money pursuing a win that wasn't there.

As a result of the settlement, Kern County’s biosolids regulations will return to where they were in 2005 — requiring all sewage sludge spread here to be treated to exceptional quality.

That triggers the need for a full environmental examination of the practice of applying biosolids on land in the county, Nations said.

He said the County of Kern, under the terms of the settlement, will do an environmental report that could guide the future permitting of similar land application projects.

Los Angeles’ Green Acres Farm would be protected from those additional regulations – grandfathered in under the old rules.

But the environmental impact report could recommend new regulations for any new project proposed in unincorporated Kern County, Nations said.

The regulations can’t become a ban.

CAN'T BLAME THE BOARD

“I don’t necessarily blame the supervisors for looking out for Kern taxpayers.We fought valiantly,” Florez wrote in a message to The Californian Tuesday.

But, he said, Kern County and its leaders cannot stop pursuing environmental protections for citizens just because this lawsuit is over.

“It does concern me to think that perhaps the people of Kern County will let their guard down and stop thinking of ways of pressuring LA to stop sludge dumping in Kern. We shouldn’t stay helpless,” he wrote. “I’m afraid that Kern leaders will give up the fight in general and when that happens, they might as well put a big sign at the county line inviting sludge and other dumpers to ‘dump on us.’”

As for Los Angeles, Florez said all the city leaders and legislators there who pride themselves on their environmental credentials have tarnished their reputations and will pay for it when they run for higher office.

“You can’t dump your human waste on other, smaller communities and expect to call yourselves an environmentalist."

Read the Measure E settlement agreement between the City of Los Angeles and County of Kern.

1994: Locals start to complain as contractors and growers begin spreading sludge on roughly 24,000 acres across Kern.

1996-97: More than 1 million wet tons of sludge come to Kern annually; city of Oxnard buys a sludge farm outside Wasco.

1998: The Kern County Board of Supervisors passes a temporary sludge ordinance.

Tulare and Stanislaus counties ban all but the most highly treated sludge.

1999: Kern bans all but the most highly treated sludge starting in January 2003; Southern California sewage districts sue and the litigation is ongoing.

Kern is down to five sludge farms spreading fewer than 300,000 wet tons of sludge annually.

2001: Kings County bans all but the most highly treated sludge.

2002: Sludge generators and handlers file several new suits against Kern, claiming its ordinance is discriminatory, causes economic hardship, etc.; the cases were thrown out or decided in favor of the county.

2004: Kern County Water Agency suggests moving all sludge farms and dairies to lands in western Kern out of the way of water resources.

2005: State Sen. Dean Florez, D-Shafter, and other leaders launch a campaign to ban sludge by referendum.

June 2006: Kern County voters, with 83 percent of the vote, ban sewage sludge from being spread on land in unincorporated areas of Kern.

November 2006: Feess issues an injunction to stop Measure E from taking effect until the case is completed.

August 2007: Feess overturns Measure E, saying it failed scrutiny under the "commerce clause" of the U.S. Constitution because it did not apply to the whole county and therefore discriminated against Los Angeles. (Kern's incorporated cities, which are not subject to county rules, are not bound by Measure E.)

September 2009: A three-judge panel of the 9th Circuit Court of Appeals rules Measure E does not violate the interstate commerce clause of the U.S. Constitution. It vacates Feess' ruling against Measure E.

November 2010: Feess dismisses what was left of the 2006 federal case.

It also revives a federal law issue thrown out by the 9th Circuit Court of Appeals.

The case is later moved to Tulare County Superior Court.

February 2013: The 5th District Court of Appeal in Fresno upholds the Tulare County Superior Court injunction against enforcing Measure E. It calls the land application of biosolids a "widely used, widely accepted, comprehensively regulated method by which municipalities fulfill their obligation to reduce the flow of waste to landfills."

It says Kern County is mandated by state recycling law to allow the land application of biosolids and that Kern overstepped its powers to police its own territory.

July 7, 2014: The California Supreme Court rules the sewage agencies failed to file two of the five state claims it made against Measure E within a 30-day period following the dismissal of a similar federal lawsuit. Los Angeles vows to continue fighting over the outstanding claims.

Feb. 5, 2015: Tulare County Superior Court Judge Lloyd Hicks rules that the Measure E lawsuit must go to trial on the merits of the case.

Kern County attorneys argue that while Green Acres Farm checks for chemicals regulated by the Environmental Protection Agency, that agency does not have standards for many chemicals that are of “emerging concern” and Kern County residents shouldn’t have to risk harm from those constituents in even highly treated sewage sludge.

He ruled the Kern County law overstepped the county’s police powers and was trumped by the California Integrated Waste Management Act, a law designed to increase recycling in the state.

Fortunately for Kern, Hicks ruled against Los Angeles on another point — that Measure E violated the commerce clause of the U.S. Constitution.

That was the only claim Los Angeles could have used to force Kern County to pay it multi-million dollar legal bills on the case.

Aug. 8, 2017: Kern County supervisors vote to support a settlement of Los Angeles’ lawsuit against Measure E. Measure E would be eliminated. Greenacres Farm would continue to operate. Kern County would do an environmental impact report on the land application of sewage sludge. And both sides would bear their own legal fees. Kern County has spent roughly $9 million on the defense of Measure E over the past decade.