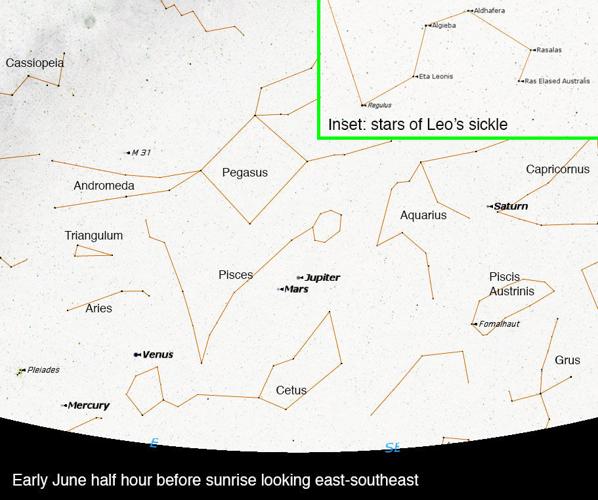 The early June sky a half-hour before sunrise looking east-southeast. 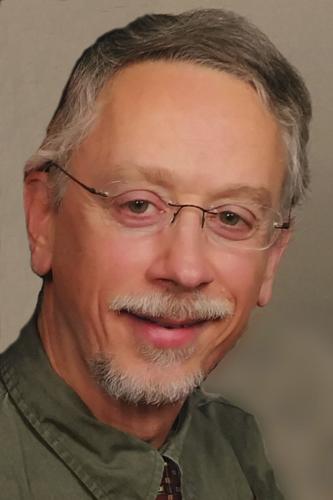 The early June sky a half-hour before sunrise looking east-southeast.

Summer break is now in full swing — all of the schools are now finished with their spring semesters. Bakersfield College will start its summer session next week on June 13.

Our sun appears to be starting back up its own activity cycle now. Its cycle is a bit longer than our seasonal or semester cycle though — a period of 11 years on average.

When the sun is more active, we see more sunspots, flares and large eruptions called coronal mass ejections, which can damage satellites and even trigger power outages here on the ground. The last peak in activity was in the years 2012 through 2014 and reached a minimum in December 2019.

We're beginning to get a better idea of why the sun's activity varies as it does, and the current increase in the sunspot number and other solar activity is tracking pretty well with the NOAA solar cycle prediction panel. Though most people know NOAA, the National Oceanic and Atmospheric Administration, as the agency responsible for our weather predictions, they also are tasked to monitor and predict "space weather," which is the interaction of solar particle outflow and Earth's magnetic field.

With increased solar activity comes increased intensity of the aurorae and increased chances that those in the lower 48 states can see them under dark skies away from the city. See swpc.noaa.gov for the latest space weather and aurora updates.

CAPSTONE off to the moon

On June 13, the small CAPSTONE satellite, just 55 pounds in mass, is scheduled to launch for a three-month journey to the moon. Once there, it will go into a special elliptical polar orbit around the moon that uses the balance point in the gravities of Earth and the moon to maintain stability and improve energy efficiency. At closest approach, CAPSTONE will be just 1,000 miles from one lunar pole and take seven days to get to its farthest point 43,500 miles from the other pole.

CAPSTONE is a pathfinder mission, testing systems and processes for the future Gateway moon-orbiting outpost (small space station) that will be part of NASA's Artemis program. Besides testing the use of the special orbit, CAPSTONE will communicate with the Lunar Reconnaissance Orbiter (LRO) to navigate itself, so it won't have to rely exclusively on tracking from Earth. The Gateway outpost and spacecraft going to the moon's surface will need that autonomous navigation ability.

Note the more leisurely speed CAPSTONE will take to get to the moon — three months instead of the three days we used for the Apollo missions. Since CAPSTONE is a robot built for space, it doesn't need life support and it won't get bored from the long journey. See nasa.gov/directorates/spacetech/small_spacecraft/capstone for more about CAPSTONE and nasa.gov/gateway to learn about the Gateway outpost that should launch no earlier than November 2024.

This evening, the moon is a fat waxing crescent among the stars of Leo. It is above the bright star, Regulus, at the bottom of the sickle (or backward question-mark) of Leo. Above Regulus in the sickle pattern is the medium-bright star Eta Leonis where the curve part of the sickle begins (see the inset of the star chart). The dark part of the crescent moon will be covering it up at the time of sunset.

Between 8:53 and 8:55 p.m. we will see Eta Leonis appear from behind the bright side of the moon. Very careful observations might show the binary nature of Eta Leonis as the two stars are uncovered at slightly different times. The moon will be at first quarter on June 7 and full phase on the pre-dawn morning of June 14.

Early morning risers will see a line of four bright planets in the southeastern sky. From lowest to highest, it will be Venus, Mars, Jupiter and Saturn. Jupiter and Mars were right next to each other on May 29 and now they are distinctly separated from each other. You might be able to pick out a fifth planet, Mercury, just above the horizon in the east but it may be lost in the twilight glow, so a pair of binoculars would be necessary to pick it out. The accompanying star chart is the view at about 30 minutes before sunrise. Getting all of the naked-eye planets this close to each other does not happen often — it'll be the year 2041 before this happens again.

I hope you'll be able to go out and enjoy a truly dark sky filled with stars sometime this summer!