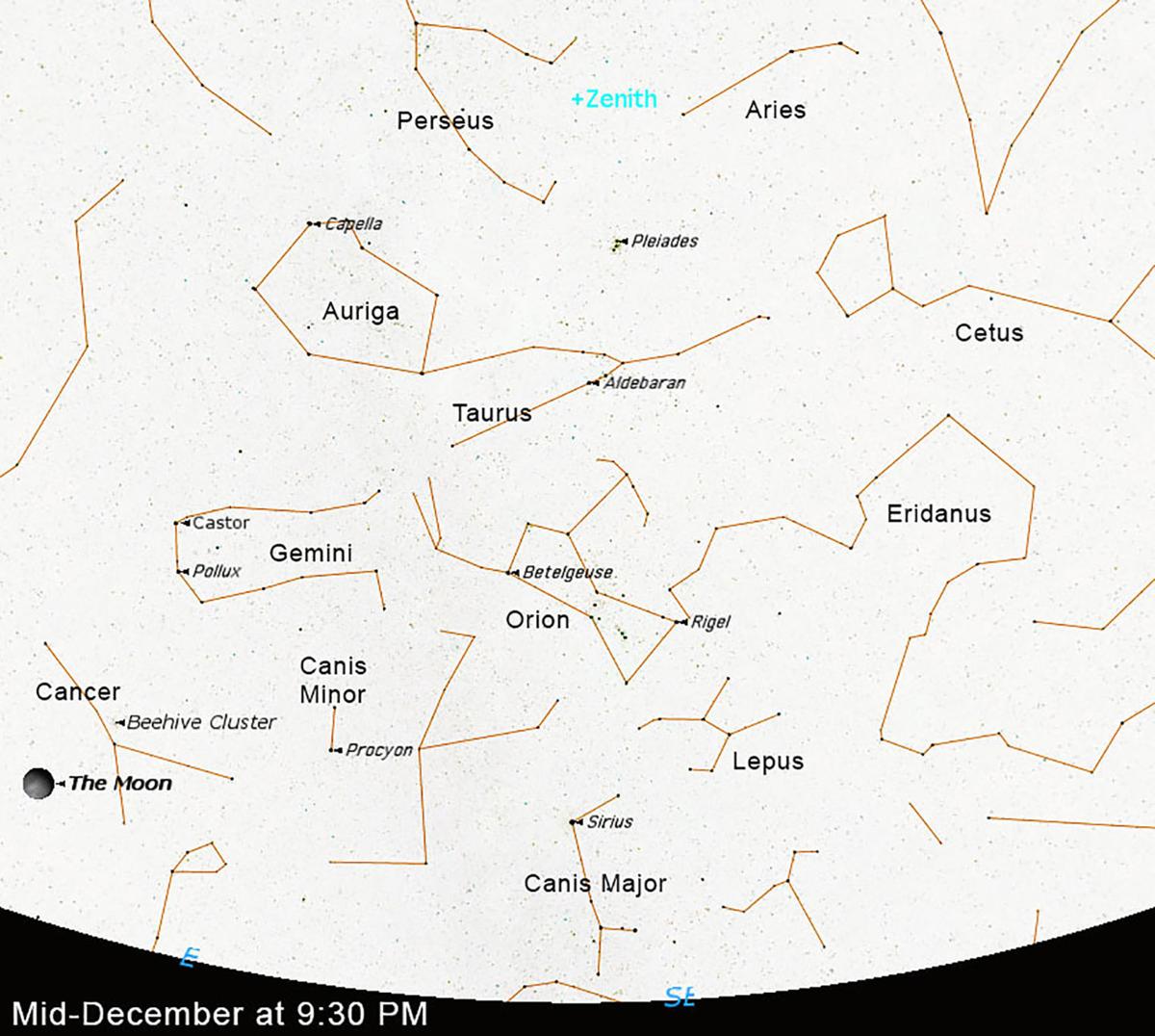 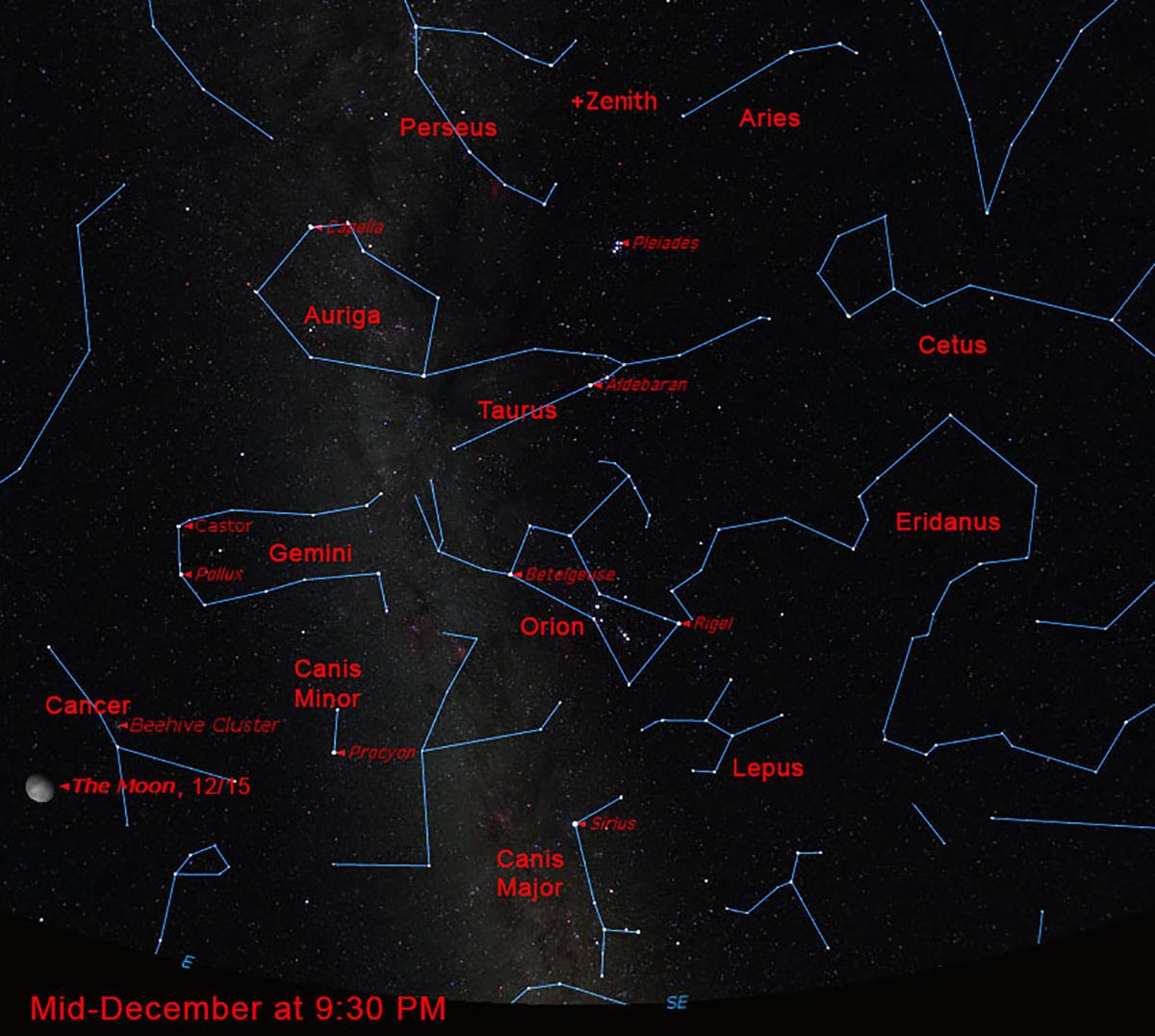 Another semester is finished at Bakersfield College and the William M. Thomas Planetarium finished its fall schedule of shows Wednesday with “Season of Light." Just one snag this season due to problems with the film file caused the postponement of the Mars 1001 showing. It’ll be shown in the spring season of shows that will start up in mid-February. In the meantime I’ll be enjoying the winter break with my daughters, who are flying home and reveling in fresh-squeezed orange juice from locally grown tree-ripened oranges.

Another thing to enjoy are the brilliant stars of the winter constellations such as Orion, Taurus, Canis Major, Auriga and Gemini. Orion will already be up when the sky is dark enough to see stars. The attached star chart shows the sky for 9:30 tonight when the last of the constellations of the Orion group, Canis Major, is fully above the horizon. If you follow the line from Orion’s belt down, you’ll come to the brightest star in the night sky, Sirius, which is also the closest star we can see with the unaided eye from Kern County.

An even closer star visible from Bakersfield is Barnard’s star in the constellation Ophiuchus, but it requires a telescope to see since it is a red dwarf star shining with just 1/2500 the sun’s luminosity. Sirius, on the other hand, shines with about 25 times the sun’s luminosity. If we were orbiting Sirius at the same distance as we orbit the sun, the temperature on Earth would be almost 295 C (over 560 F) without considering any sort of greenhouse effect.

The temperature calculation I just gave uses a simplified formula that includes just the distance from the sun, the sun’s luminosity, and the reflectivity of the planet (called the “albedo” in astro-speak). For the sun, the formula gives a temperature for Earth of -19 C. Yes, below the freezing point of water. The Earth has an atmosphere that traps some of the energy radiating outward from the warm ground in what’s called a greenhouse effect.

As with most things in life, a greenhouse effect in moderation is a virtue. We need some to keep the surface temperature of Earth warm enough for liquid water to exist. A greenhouse effect in excess is not good for human civilization because of the disruptions in regional productions of food and the supply of fresh water.

As astronomers consider which exoplanets are in the “habitable zones” of their stars — range of distances in which the surface temperature of the planet would allow liquid water to exist — they may include various concentrations of water vapor, carbon dioxide, methane, ozone and nitrous oxide in a planet’s atmosphere to come up with possible habitable zone boundaries.

Last week, the European countries that are members of the European Space Agency (ESA) committed significant boosts in funding for the space agency. One of the biggest boosts will be with the Copernicus program of Earth-observing science satellites to observe human-made sources of carbon dioxide on a daily basis as well as sea surface height and vegetation health.

While NASA pioneered efforts to track carbon dioxide from space with the OCO-2 and OCO-3 missions, they are designed to last just a few years and there are no plans to keep monitoring carbon dioxide with future missions. The ESA system will operate for at least 20 years and cover wider swaths of the globe, covering any given point more frequently than the OCO missions.

In the night sky

In our evening sky tonight, Venus and Saturn are now the only planets visible because Jupiter is lost in the twilight glow of the setting sun. Jupiter goes behind the sun on December 27. Saturn is also dropping closer to the sun while Venus climbs up away from the sun as Venus catches up to Earth. Venus is now that brilliant evening star you see in the west. In the early morning sky, Mars is climbing up away from the sun as Earth catches up to it. Next year, Mars will be well-placed for NASA, ESA, China and the United Arab Emirates to launch their respective Mars missions.

One last note: The December solstice that marks the beginning of our winter will happen on Dec. 21. The sun will stop its southward drift among the stars at 8:19 p.m. Pacific Time. Enjoy the longest night of the year and I wish you many blessings this holiday season and a great 2020!