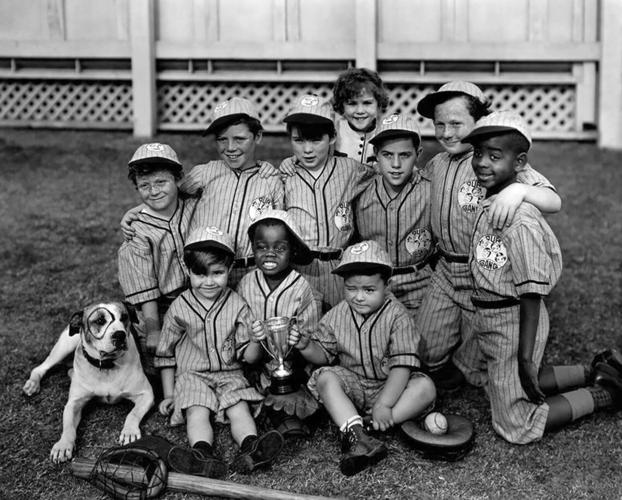 Sidney Kibrick, far left in the back row, in an "Our Gang" publicity photo circa 1934. Kibrick's brother, Leonard, who also appeared in some films, is second from right in the back row. 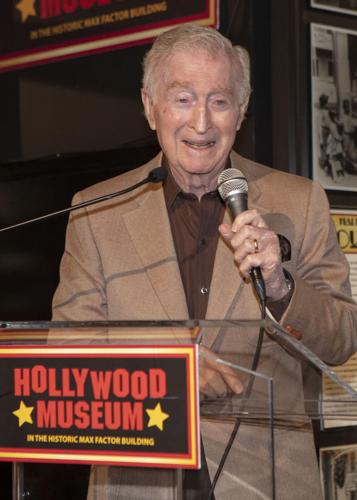 Former child actor Sidney Kibrick addresses the crowd at the opening of the Hollywood Museum's "Our Gang" exhibit on Wednesday. 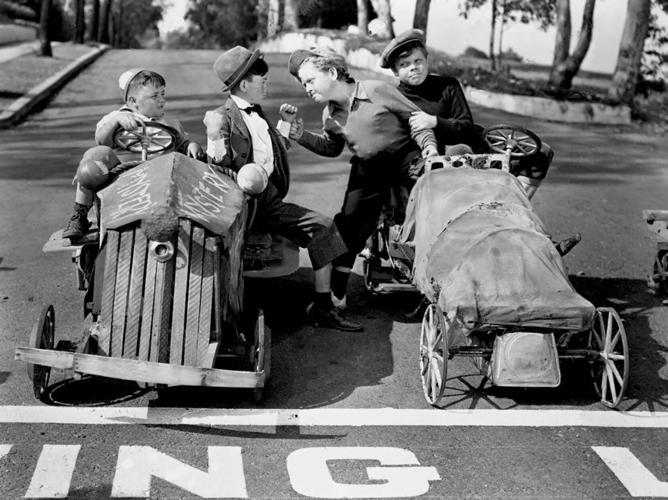 Sidney Kibrick is second from right in this scene from the 1939 "Our Gang" short "Auto Antics."

Sidney Kibrick, far left in the back row, in an "Our Gang" publicity photo circa 1934. Kibrick's brother, Leonard, who also appeared in some films, is second from right in the back row.

Former child actor Sidney Kibrick addresses the crowd at the opening of the Hollywood Museum's "Our Gang" exhibit on Wednesday.

Sidney Kibrick is second from right in this scene from the 1939 "Our Gang" short "Auto Antics."

When a new exhibit opened Wednesday at the Hollywood Museum celebrating the 100th anniversary of the "Our Gang" film shorts, one special guest on hand was indeed special.

First screened in movie theaters during the early 1920s, the film series was produced for another two decades and featured an ever-changing cast of some 200 children, showcasing their comedic neighborhood antics.

"This is an exhibit that movie enthusiasts will enjoy, as well as families who have enjoyed 'Our Gang' on film, in television syndication over the years, and the 'Our Gang' animated series," said Donelle Dadigan, founder and president of the museum. Rebranded as "The Little Rascals," the films reached a new audience when broadcast on television in the 1960s.

Throughout the series of some 220 short films created by producer Hal Roach, about 40 child actors appeared regularly beginning in 1922's silent era and continuing through 1944. Sidney Kibrick, one of the last surviving "Our Gang" cast regulars, was among the numerous celebrity guests on hand for the exhibit's opening.

"We'd have two hours of schooling in the morning and then work anywhere from six to 16 hours until we finished," recalled Kibrick from his home in Los Angeles. "There was a lot of work, no question about it, but our director, Gordon Douglas, was a terrific guy and he was really able to get a lot out of each kid."

Despite the long hours, there was also occasionally time to relax and be a kid off camera.

"There was a big pond at the studio, so Spanky and I would go fishing a lot," said Kibrick. "We developed a lifelong friendship and although he moved to Dallas while I lived in Beverly Hills, we used to visit and stay at each other's homes time and time again over the years."

Despite dozens of kids running around on set, Kibrick remembers things never getting out of control.

"We had scripts and had to rehearse before shooting so it was very structured," he recalled. "Parents had to be on the set at all times and they were really nice to all the kids."

And while most of the young actors got along, Kibrick remembers one troublemaker.

"Alfalfa (Switzer) was a very difficult kid and created a lot of problems on the set. He was not nice — not only to the gang, but to the boys and girls who were extras in the movies. It was just his nature. Years later, he was killed in a fight, so he was basically a tough kid."

So too was Kibrick's character, Woim.

"I was Butch's sidekick and we were the bad guys always taking on Spanky, Alfalfa and Darla (Hood)," he explained.

Born in Minneapolis, young Sid was just an infant when the family moved to Los Angeles so his dad could find better work. "We left when I was 6 weeks old," said Kibrick, who was later "discovered" after turning 5.

"My mother took us to Grauman's Chinese Theater and after the movie a man came over to us, pointed at me, and said he could 'use that little kid in the movies,'" Kibrick recalled. "He was a talent scout, but you had to join Central Casting before you could work in those days. It was very hard to get into, but he helped us. I began working in a couple of Shirley Temple films and appeared in several films before and after 'Our Gang.'"

Kibrick remembers his parents really pushed him and his brother, Leonard, into acting.

"I was earning $750 a week in 'Our Gang' which was a lot in those days, especially during the Depression," he said. "But by the time I was 15, I'd had enough. My parents wanted me to continue but finally my mother went along with my wishes. I later attended college and became a real estate developer. I did a lot of building in the San Fernando Valley — apartments and commercial offices — and built over 1,000 homes in Thousand Oaks. So I had a very successful post-Hollywood career."

Kibrick says he provided some photos for the Hollywood Museum exhibit, which remains on display for the remainder of the year.

The Hollywood Museum is located in the historic Max Factor Building at the corner of North Highland Avenue and Hollywood Boulevard in Los Angeles. Visit TheHollywoodMuseum.com for more information.

Nick Thomas teaches at Auburn University at Montgomery, in Alabama, and has written features, columns and interviews for numerous magazines and newspapers. Visit tinseltowntalks.com for more information.