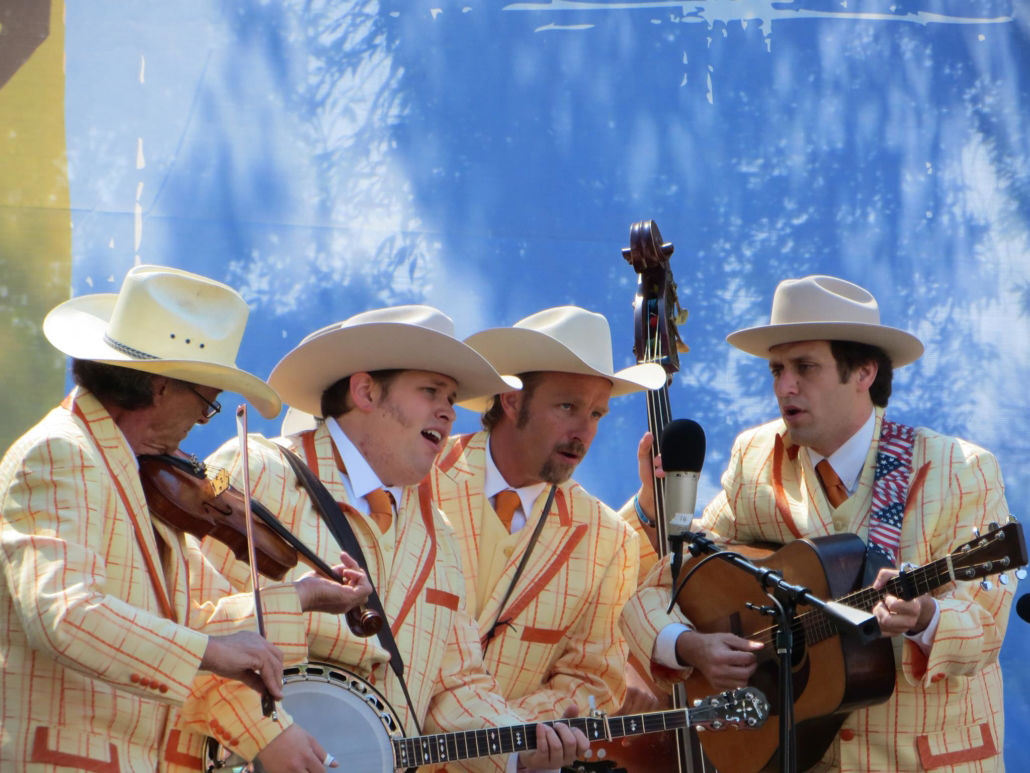 Bluegrass band The Central Valley Boys will perform Friday night as part of the Great 48 bluegrass jam, which kicks off Thursday at the Bakersfield Marriott. 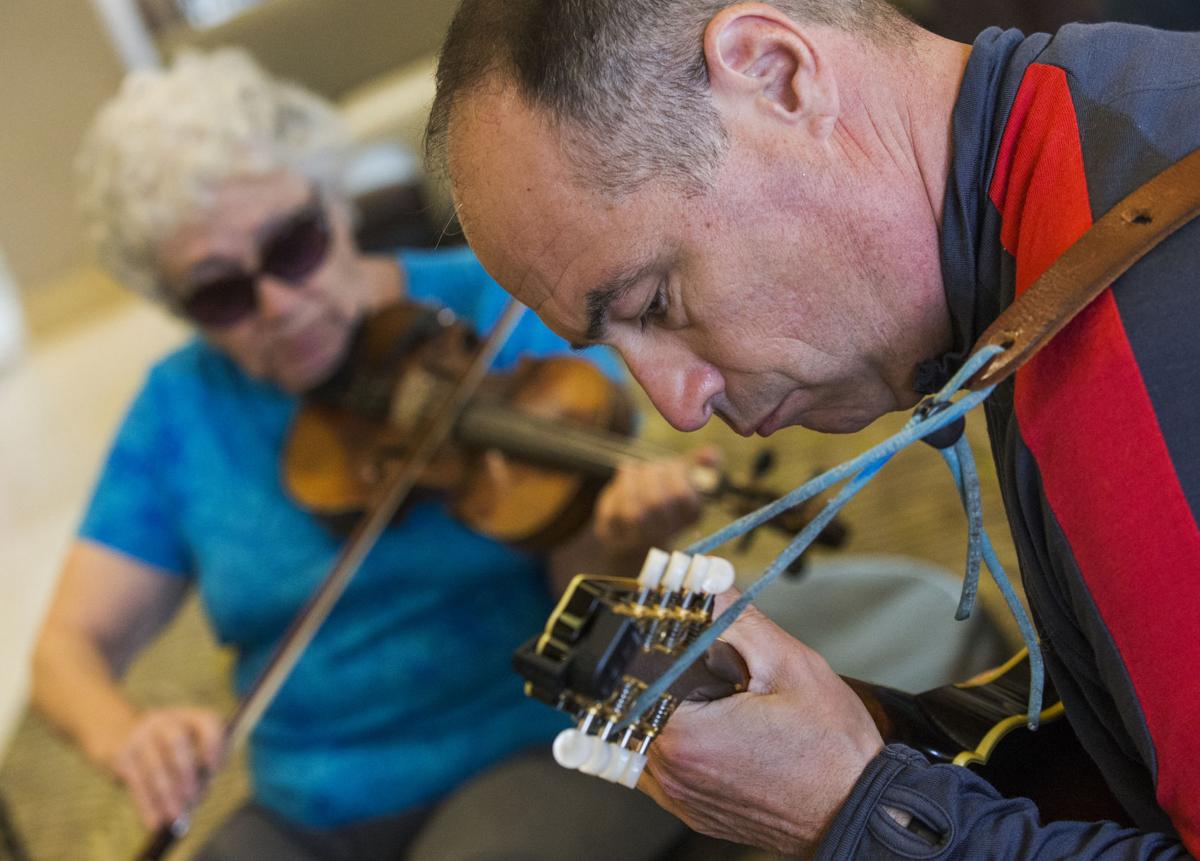 Jason Gross picks away on his mandolin as Ann Smith accompanies on the violin during a session at the Great 48 bluegrass jam in 2018. Bluegrass musicians descend on the Marriott starting Thursday for the annual music gathering.

Reel Big Fish lead singer and guitarist Aaron Barrett appears in a scene from the 2019 documentary "Pick It Up! Ska in the 90's." 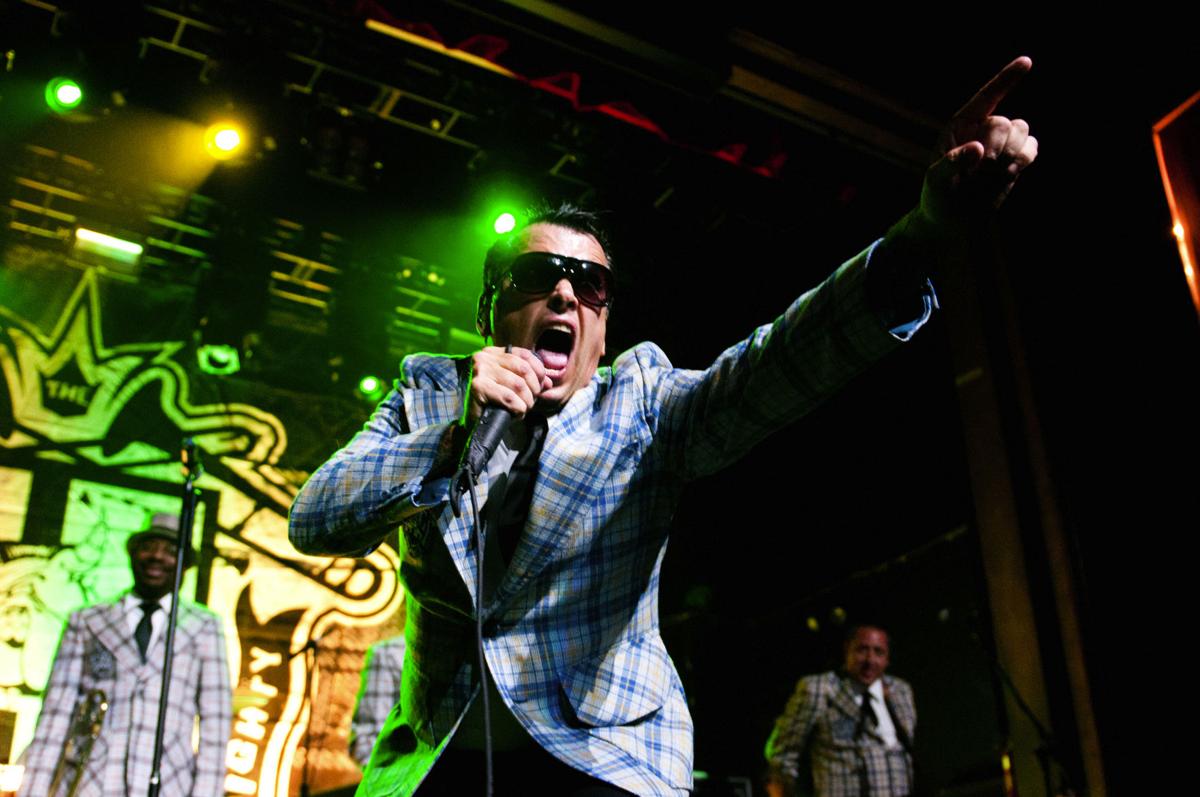 Mighty Mighty Bosstones lead singer Dickey Barrett in a scene from the 2019 documentary "Pick It Up! Ska in the 90's." 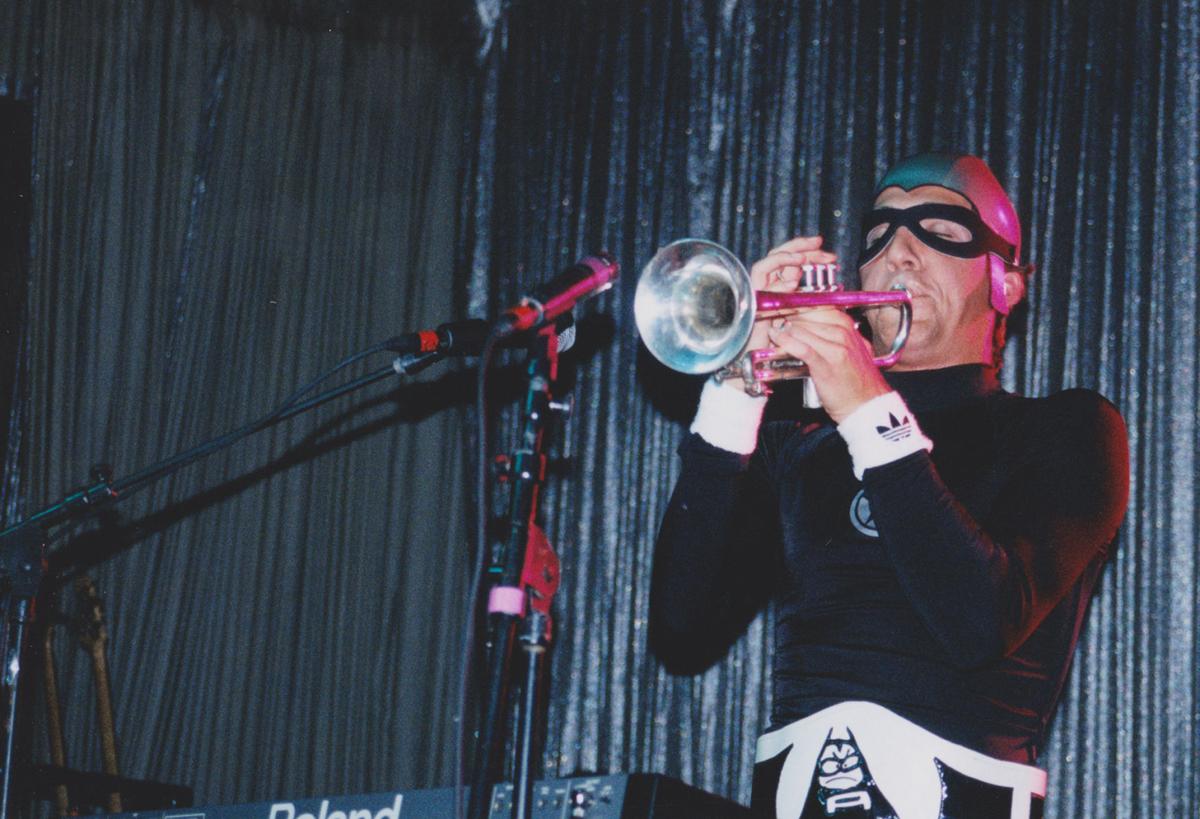 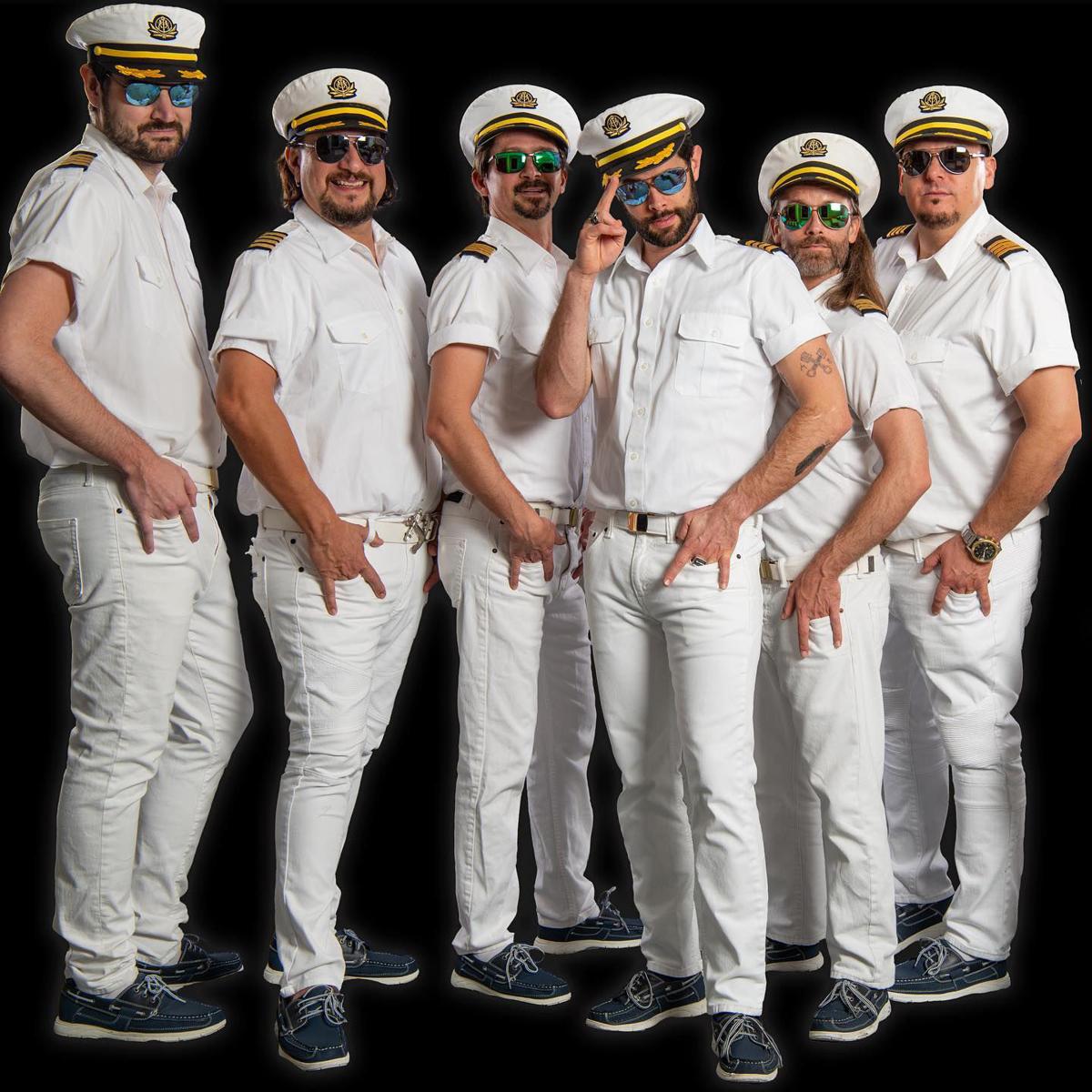 Bluegrass band The Central Valley Boys will perform Friday night as part of the Great 48 bluegrass jam, which kicks off Thursday at the Bakersfield Marriott.

Jason Gross picks away on his mandolin as Ann Smith accompanies on the violin during a session at the Great 48 bluegrass jam in 2018. Bluegrass musicians descend on the Marriott starting Thursday for the annual music gathering.

Reel Big Fish lead singer and guitarist Aaron Barrett appears in a scene from the 2019 documentary "Pick It Up! Ska in the 90's."

Mighty Mighty Bosstones lead singer Dickey Barrett in a scene from the 2019 documentary "Pick It Up! Ska in the 90's."

The Great 48 bluegrass jam has become somewhat of a local institution for bluegrass aficionados, pickers and the grinners who love them.

Returning to the Bakersfield Marriott, the event running Thursday through Sunday brings players from all over the country to partake in one of America’s most hallowed and social musical art form, the jam session.

Those already familiar with the Great 48 are aware of its spectacle of sight and sound, but for the uninitiated, just imagine the halls of the Marriott being overtaken by throngs of well-mannered, stringed-instrument-wielding attendees.

Organized by the California Bluegrass Association, the four-day gathering continues to be one of the best-attended local music events, attracting top bluegrass artists such as Rhonda Vincent, David Parmley and Michael Cleveland and Flamekeeper, all of whom have performed as featured artists during the event.

The jam sessions begin Thursday once guests have arrived and checked in, making their connections inside one of the designated ballrooms where musicians of all ages will be found interacting and socializing through their instruments. These sessions continue into the wee hours, or until last dobro standing, or strumming. These family-friendly music sessions are free to attend by the public.

On Friday morning, the jams, workshops, band scrambles and other activities continue throughout the day until the evening’s ticketed concert showcase, featuring The Central Valley Boys and The Old Pals, at 7 p.m. Following the concert, the jams continue.

I attended the Great 48 over the years dating back to its SuperGrass formative years in 2007 when low attendance nearly caused the event to go bust. Luckily another bluegrass revival and a renewed interest in folk music instruments from younger musicians have helped boost attendance.

Today, hotel wing reservations sell out in advance and the event continues to garner interest nationwide.

Novices to professional players are encouraged to participate and fans are welcome to help fuel the picking with applause or just good ol’ attentive ears and toe-tapping.

The Great 48 runs Thursday through Sunday at the Bakersfield Marriott at the Convention Center, 801 Truxtun Ave. Daily jam session gatherings are free to attend. Tickets for Friday night’s concert with The Central Valley Boys and The Old Pals are $27 in advance at California Keyboards, 2408 Brundage Lane, or $30 at the door. Doors open at 6 p.m., concert at 7 p.m. For more information call 332-7207 or visit cbaweb.org.

When I first came across a Kickstarter campaign for a proposed documentary titled “Pick It Up! Ska in the 90’s” on the ska music craze, I couldn’t believe it. I understand why it's a good idea — I play in a ska band (Mento Buru) from the ’90s, so of course I connected with that nutty idea — but I didn’t expect to see the overwhelming response to their fundraising. Posting an original goal of $40,000, producers of the film ended up raising $118,076 thanks to more than 1,900 backers from all over the globe. After dropping a trailer teasing interviews with Angelo Moore of Fishbone, along with members of The Aquabats, Mad Caddies, Less Than Jake, Goldfinger, The Slackers, No Doubt and Hepcat, with narration by Tim Armstrong of Rancid, my fellow ska fiends and I waited for the film to drop.

The verdict: Any film project that would even remotely make an attempt to pursue such a topic is going to get my attention, but director Taylor Morden really did it justice. The film is well-made and easy to follow whether you're a newcomer to ska music or an old-school rude boy or rude girl who still has their favorite bands of the time in rotation. The grainy archive concert footage is reason alone to watch, along with interviews and recollections from artists Mike Park of Skankin’ Pickle, Monique Powell of Save Ferris, Rob “Bucket” Hingley of The Toasters (who also signed Mento Buru to his label, Moon Ska Records, in 1996, and featured fellow local ska outfit Crawdaddy on another of its label compilations) and many more who offer a fun and heartfelt skank down memory lane. You’ll have a blast. Oi!

Check out “Pick It Up! Ska in the 90’s” on Amazon Prime Video, pick it up on Blu-ray, DVD or visit skamovie.com.

The smooth rockin’ sounds of the 1970s and pre-new wave ’80s come alive with this wacky but slickly produced outfit of musicians who’ve become one of the biggest draws on the tribute circuit. Artists who fall under the category of yacht rock: Fleetwood Mac, Steely Dan, Christopher Cross, Supertramp. If these artists conjure memories of making out in your favorite corduroy pants in college (or high school), then this show is for you. Also performing is Natalie Gelman.

The weekend tributes continue and why not? While the real Blink-182 is currently playing shows sans one original member, the group’s influence has helped spawn clones like this SoCal trio who flaunt themselves as "America's No. 1 nationally touring Blink-182 tribute band." Teamed up with Anaheim-based Sublime tribute Don’t Push, Bakersfield is about to lose its collective stoner minds. Sing along and line up a designated driver.

Veteran Bako guitarist and vocalist Travis Byler has assembled his own motley crew of local musicians for this tribute to one of rock’s greatest albums to be performed in its entirety. Joining Byler are Kyle Appleton on guitar, Ray Sadolsky on bass, Jason Blakely on drums and Tony Rinaldi on keyboards. Now, if they’d follow up with "Achtung Baby."

Bow down to bluegrass at annual Great 48 jam

Larry Kuhn wears his greatest secret on his sleeve.