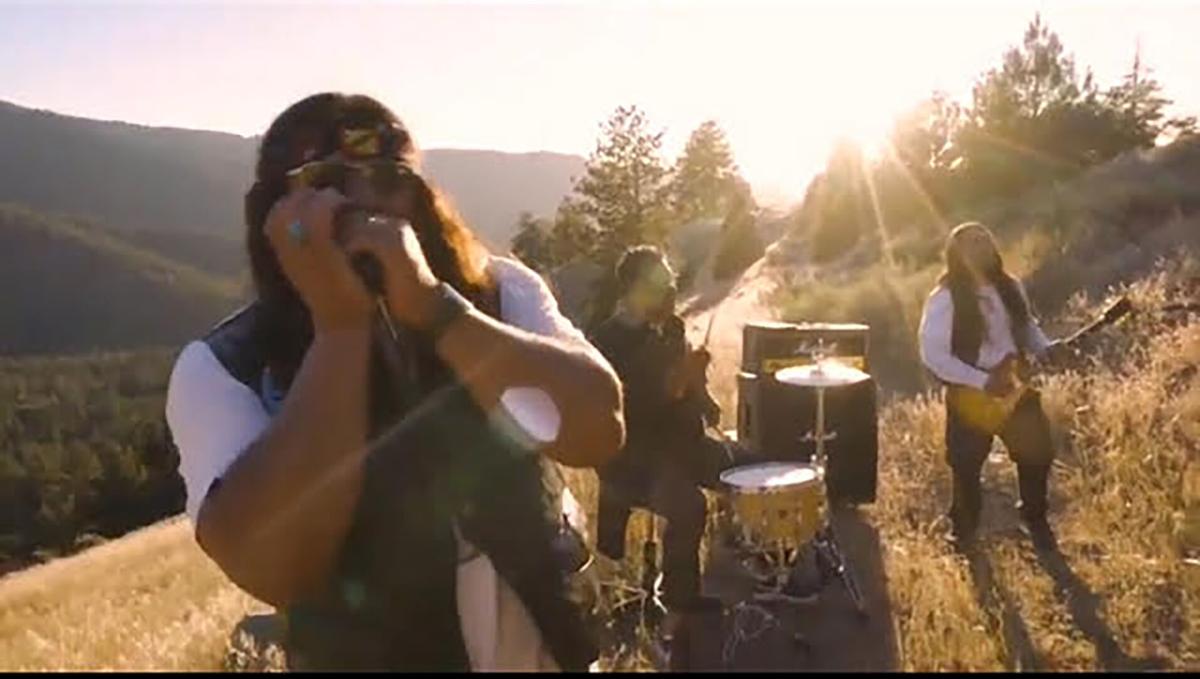 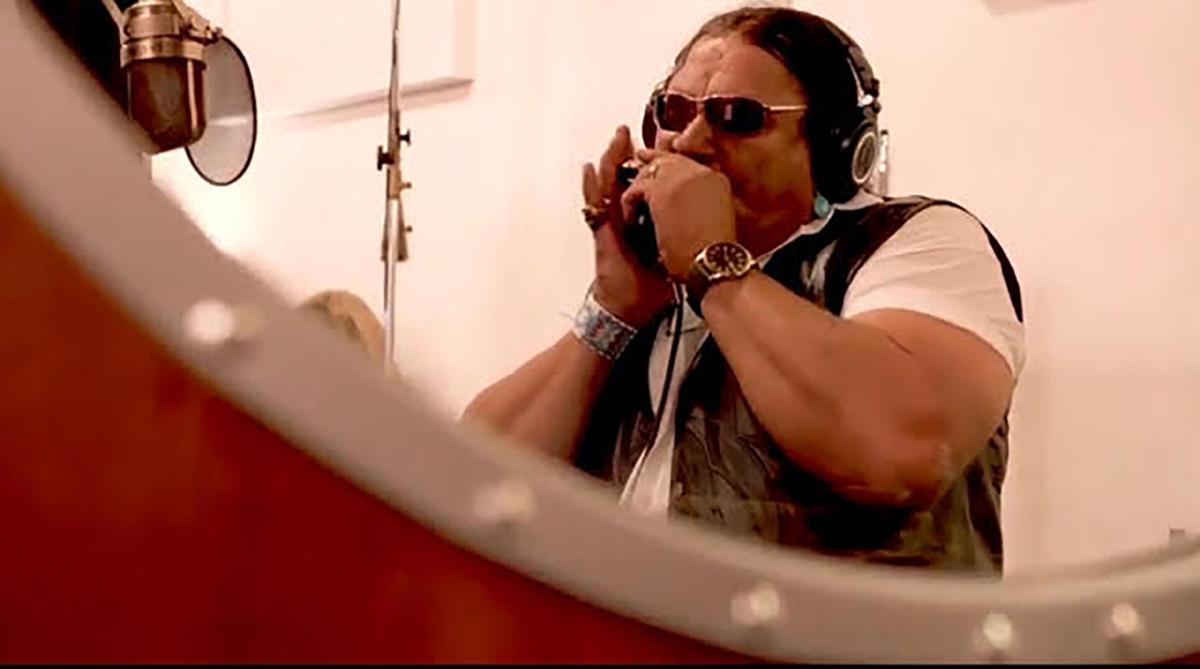 Robin Hairston performs in this image from the video for Blue Mountain Tribe's "Pray For Our Planet." The video was directed by Robert Reed Altman, son of famed film director Robert Altman.

Robin Hairston performs in this image from the video for Blue Mountain Tribe's "Pray For Our Planet." The video was directed by Robert Reed Altman, son of famed film director Robert Altman.

Robin Hairston has the perfect personality for fronting a band.

His youthful enthusiasm is palpable and his demeanor electric. When he tells the story behind his band’s song "Pray For Our Planet" and the video for it, one can’t help but feel his excitement for it all.

Hairston, a Chiricahua Apache, is also straightforward, especially when it comes to that song’s message: a plea for awareness and understanding of what’s being done to, done under and affecting Native American reservations and their sacred lands. Most specifically, the Dakota Access Pipeline and the recently blocked plans to excavate massive tunnels under Native American sacred ground in Oak Flat, Ariz., to create copper mines.

"I want the world to know what's going on in this country with the desecration of the destruction of Native American sacred sites," Hairston said. "Because people don't really know. The world doesn't really know. A lot of people in our country don't know."

The band’s activism is also apparent in their 2019 single, "Children on the Rez," which, as stated in its video’s introduction, "was written to bring awareness to the devastating and extremely high suicide rate amongst children and youth in our American Indian reservations."

That song got the Blue Mountain Tribe a Native American Music Award — their second — for best live performance. That win would end up being a catalyst for the creation of their next song.

In 2020, Chief Arvol Looking Horse, Keeper of the Sacred White Buffalo Calf Pipe for the Great Sioux Nation and the founder of World Peace and Prayer Day, spurred by our current social injustices, upheavals and the global pandemic, sent a message to all the winners of the Native American Music Awards. The massage was to "pray for the planet and to pass the word."

"He is the most highly respected Indian chief in the whole country and when he says something, people jump," Hairston said. "Every Indian nation follows Chief Arvol Looking Horse."

Inspired by that request, Hairston and his band went about writing "Pray For Our Planet," but then came the next question: How do they get the funds to record the song and make the video? Not to mention, spread the word?

This is where the story gets pretty cool.

Hairston’s friend Michael Altman lives in a property near Tehachapi and the two became friends over the years whenever Hairston would come by his property to pick up firewood. They would talk about Native American culture. During one of his visits, Hairston mentioned that he wanted to create a song and video about "what's going on with our planet and in our country."

Much to Hairston’s surprise, unprompted, his friend offered to help. Not just help, but pay for all of the studio time himself. Altman would even get his younger brother Robert involved and they would film the video themselves — considering they happened to have some time on their hands.

It turns out that Altman and brother Robert Reed Altman are both sons of the late film director Robert Altman, the Hollywood luminary who directed such films as "M.A.S.H," "McCabe and Mrs. Miller," "Popeye," Nashville," "The Player," "Short Cuts," "The Long Goodbye" and "Brewster McCloud" (those last five are personal favorites). The same Robert Altman who is generally considered one of the greatest filmmakers in movie history. It’s a consensus that I happen to agree with.

"He never, ever told me who he was," Hairston said.

Michael Altman has also staked his own claim in moviemaking history by writing the lyrics to  "Suicide is Painless," the theme song for "M.A.S.H.," at 14 years old. It’s a melody so prevalent that you’re probably singing it in your head right now.

So, with Altman facilitating the production, the band went to Cherokee Studios in Hollywood and recorded a top-shelf playback single at one of the most famous recording studios in the world. The Blue Mountain Tribe found themselves working with, recording in and developing relationships with some of the most illustrious names in show business.

"They did the whole thing analog, on tape," Altman said. "Old-school, and it came out with such a good sound because that kind of music lends itself to that."

The Robert Reed Altman-directed video for the song starts with a spoken word recitation of a quote from Brulé Lakota activist and author Mary Brave Bird over a montage of protests performed by by Michael's wife, Karon Altman (making the video truly an Altman family affair). This cuts to the band performing at Cherokee Studios with studio co-founder and song co-producer Bruce Robb playing Hammond organ with them, as he did on the song itself.

"It was so cool because it sounds like an explosion when the song first starts, when the keyboard comes in with so much power," Hairston said.

Those scenes are intercut with the band, whose every member is Native American, playing outdoors in a field, near Bright Lake, and on a mountain during dusk.

The cinematography is impressive, with the mountainside "golden hour" footage being particularly stunning. The video does a great job of keeping the viewer’s attention over a 5-minute blues song.

"It’s one thing to recognize that, but hopefully at the end you don’t even notice," said Michael Altman. "You just kinda get the feel for the project. But it does look pretty, I think."

The song also features a bonkers guitar solo by lead guitarist, and Robin’s son, Caleb that’s perfect in its ferocity as well as an affecting last verse sung by drummer Pat Mata.

"Here’s the deal with these guys: They’re for real. Robin’s the real deal," Altman said. "They’ve got all the heart in the world, you know? I’m an old hippie. I’m 66 years old. I grew up with that kind of music, the blues rock and they’ve got such a great message."

"It’s a positive message. It’s angry, as well it should be, and yet there’s hope threaded through all of it and I think it’s a great way to rally and to channel the frustration for all the wrongs that have gone on and that are going on to put that (expletive) feel-good rock 'n' roll blues message out there for people. I think it’s really important. I’m behind it because of that."

The song has garnered some global attention and continues to gather views on YouTube. Blue Mountain Tribe also recently released a livestream concert that can be found on their Facebook page (facebook.com/bluemountaintribefanclub).

Both Altman — who had been a fan of Blue Mountain Tribe since first seeing them perform in 2018 — and Hairston are amazed at how easily and naturally the entire project came together, or as Altman put it: "spirit-facilitated."

"It happened so automatically," Altman said. "Like I said, It was really smooth and really weird how it all came together."