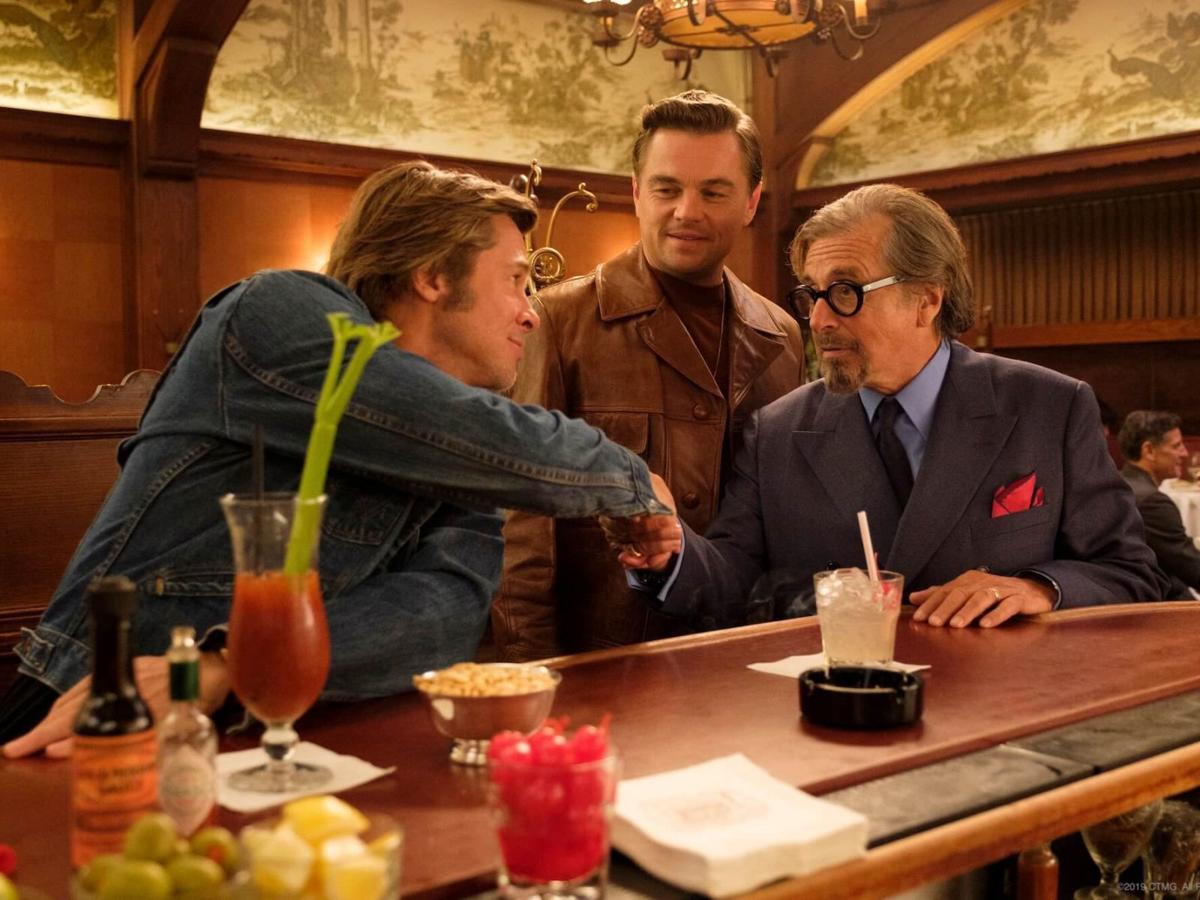 From left, Brad Pitt, Leonardo DiCaprio and Al Pacino at Musso & Frank Grill in a scene from "Once Upon a Time in Hollywood." 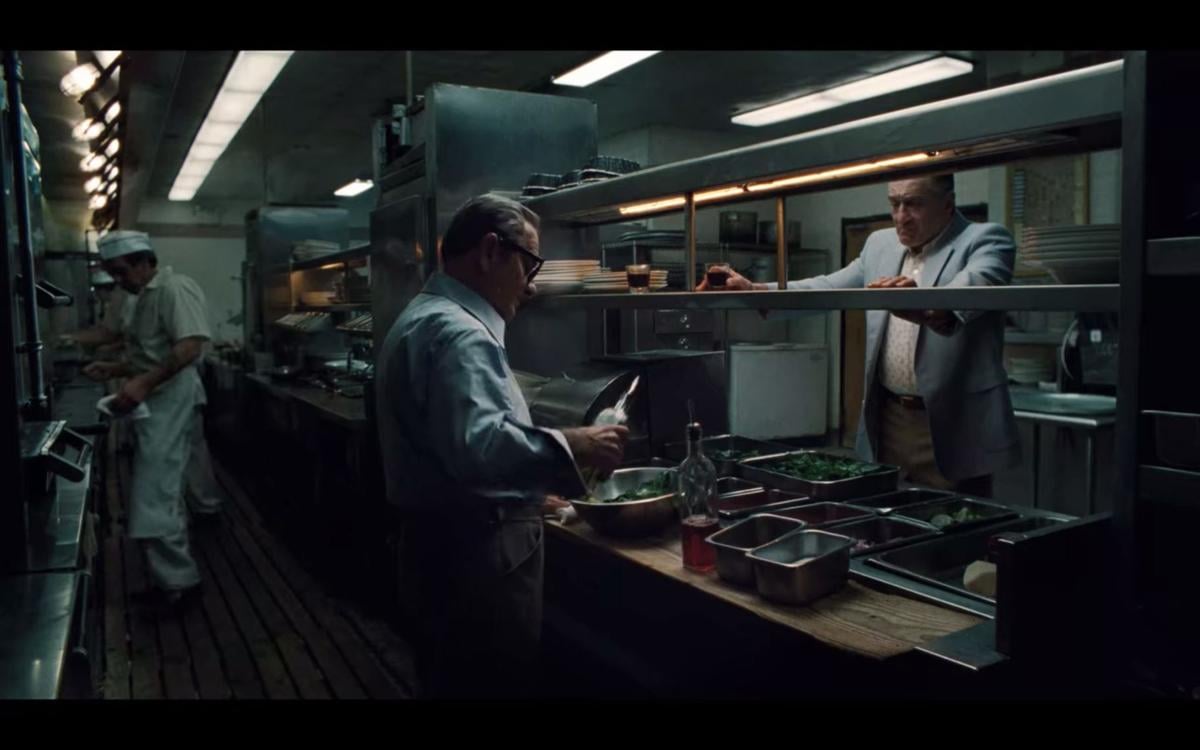 Joe Pesci, left, and Robert DeNiro in a scene from "The Irishman" filmed at New Corner Restaurant in Brooklyn. The restaurant has also been featured in HBO's "The Deuce" and the 2019 film "The Kitchen."

Cho Yeo Jeong, right, and Jang Hye Jin in a scene from "Parasite."

From left, Brad Pitt, Leonardo DiCaprio and Al Pacino at Musso & Frank Grill in a scene from "Once Upon a Time in Hollywood."

Joe Pesci, left, and Robert DeNiro in a scene from "The Irishman" filmed at New Corner Restaurant in Brooklyn. The restaurant has also been featured in HBO's "The Deuce" and the 2019 film "The Kitchen."

Cho Yeo Jeong, right, and Jang Hye Jin in a scene from "Parasite."

Before the big ceremony, let's take a look at the supporting role food and restaurants played in some of this year's nominated films. And no, we won't be covering Joaquin Phoenix climbing into the fridge in "Joker."

"Once Upon a Time in Hollywood" pays glowing tribute to Hollywood and Los Angeles of the 1960s. So many landmarks were recreated by Quentin Tarantino and his crew for the film. But one that didn't need much for its close-up is Musso & Frank Grill. The iconic restaurant on Hollywood Boulevard is celebrating its 101st year in business.

Barbara Ling, the film's production designer, told Architectural Digest that they were able to film there because Tarantino is a longtime customer who has been going there forever.

"They love him there and closed the restaurant down for five days for filming. The interiors are almost exactly the same (since 1919), and the headwaiters gave us the dishes used in the '60s, which was a miracle."

In addition to being featured in the Oscar-nominated film, the restaurant had a banner year in 2019 with the release of the coffee table book “The Musso & Frank Grill,” which chronicled for the first time ever the venue’s history, and receiving the “Award of Excellence for a Hollywood Restaurant” from the Hollywood Chamber of Commerce on its 100th anniversary in September.

Musso & Frank remains family-owned (fourth generation), overseen by Mark Echeverria, chief operating officer and proprietor. It also continues to expand its wine program, which earned it a coveted Restaurant Award of Excellence for 2019 from Wine Spectator Magazine, with the addition of the 2018 Musso & Frank Peake Ranch Syrah to the menu.

Across the country, "The Irishman" also brought a longtime restaurant into the spotlight. The New Corner restaurant in Dyker Heights in Brooklyn was used for numerous scenes featuring Frank Sheeran (Robert DeNiro) and Russell Bufalino (Joe Pesci).

New Corner, which opened its doors in 1936 as a one-room pizzeria, has also been featured in the HBO show “The Deuce” and last year's “The Kitchen,” starring Melissa McCarthy and Elizabeth Moss.

The restaurant will honor "The Irishman" whether or not it takes home any awards, Joe Colandrea, New Corner's director of marketing and son of owner Vincent Colandrea, told the Brooklyn Daily Eagle.

“We are currently in the process of putting together a dedicated wall in the restaurant that will house screenshots of New Corner in the movie, posters, scripts and other materials from ‘The Irishman,’” Colandrea said. “It was simply amazing to see the transformation of the dining room to make it uniquely tailored to what they needed for the film.”

And one final tidbit courtesy of "Parasite."

The dish "ram-don" featured in the film has a unique story. It comes up in a scene in which housewife (Cho Yeo Jeong) calls to asks her housekeeper (Jang Hye Jin) to prepare for her son after their planned outing is ruined by a rainy day. The housekeeper, who has recently been hired, is confused by the name of the dish, leading to frantic preparation.

American audiences may not realize that ram-don is not what it seems. In the English translation for jjapaguri — the Korean quick food of steak on a pile of instant noodles — the film's translator Darcy Paquet created a new word merging the words “ramen” and “udon.”

“This is something kids like, regardless of the rich or the poor,” director Bong Joon Ho told the Los Angeles Times via email. “But the rich wife couldn’t stand her kid to eat this cheap noodle so she adds sirloin topping.”