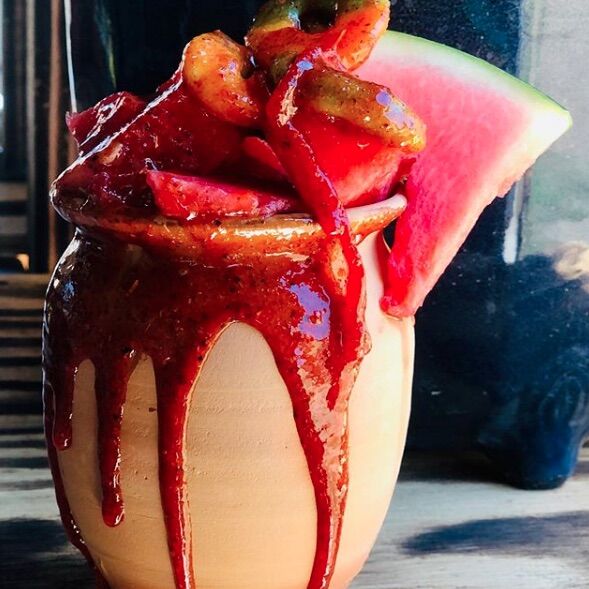 Any beverage is better with chamoy and gummy candies from Dos Amigas, a new local business started by friends to help pay for MRI school. 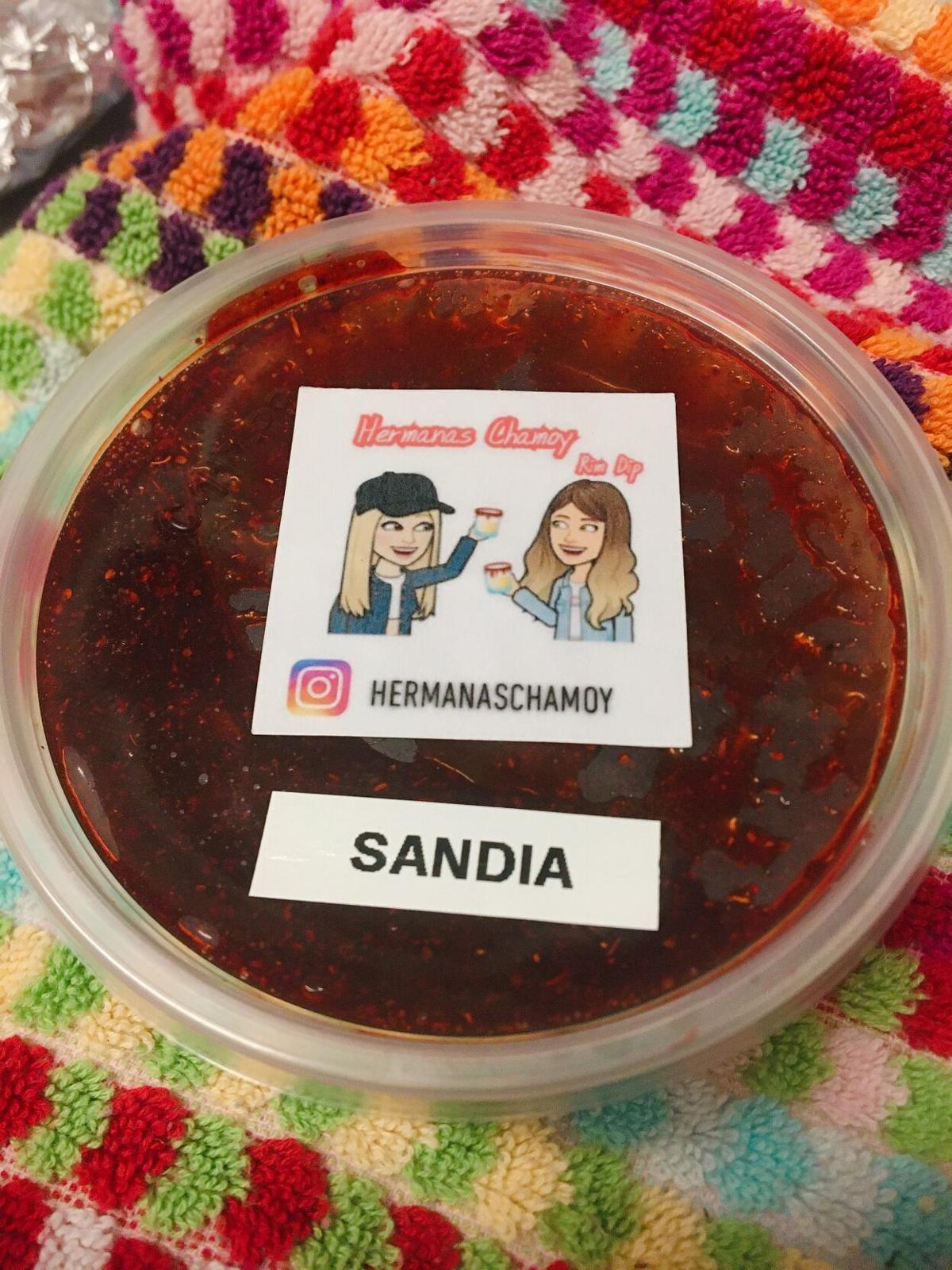 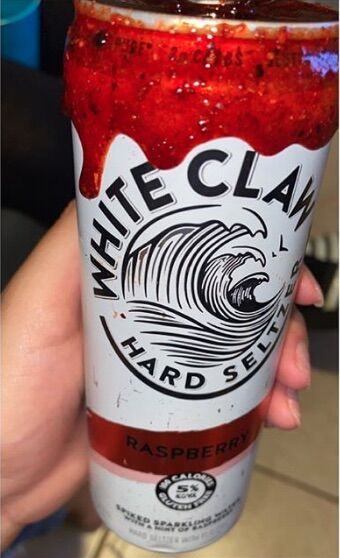 A can of White Claw gets a spicy kick when dipped in Hermanas Chamoy. The new local business is owned by sisters Jenilee Sanchez and Jaylene Valenzuela. 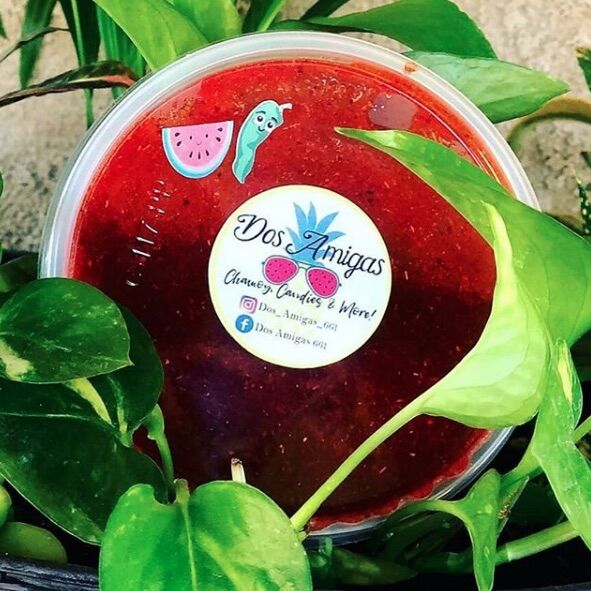 Spicy watermelon is a popular flavor of chamoy for Dos Amigas, a new local business started by friends to help pay for MRI school. 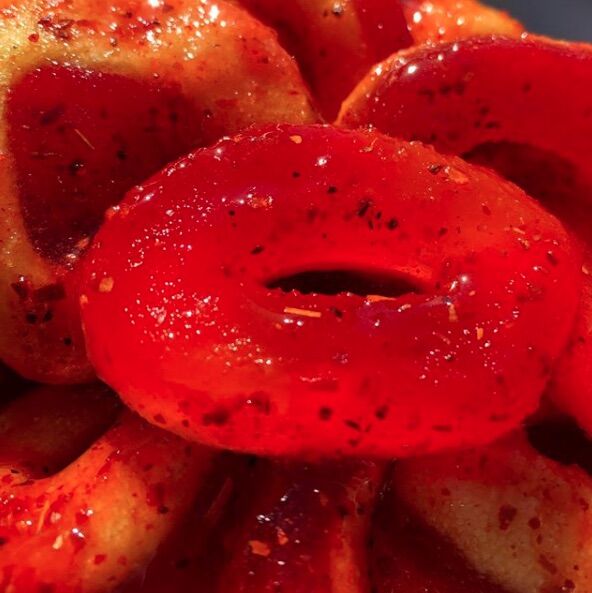 In addition to tubs of chamoy, Dos Amigas sells peach rings, seen here, and gummy worms tossed in the sweet and spicy dip.

Any beverage is better with chamoy and gummy candies from Dos Amigas, a new local business started by friends to help pay for MRI school.

A can of White Claw gets a spicy kick when dipped in Hermanas Chamoy. The new local business is owned by sisters Jenilee Sanchez and Jaylene Valenzuela.

Spicy watermelon is a popular flavor of chamoy for Dos Amigas, a new local business started by friends to help pay for MRI school.

In addition to tubs of chamoy, Dos Amigas sells peach rings, seen here, and gummy worms tossed in the sweet and spicy dip.

If necessity is the mother of invention then perhaps boredom is the mother of entrepreneurship — at least during this pandemic. While others were busy baking sourdough or banana bread or experimenting with dalgona coffee, local women got creative with chamoy and started two new businesses: Hermanas Chamoy and Dos Amigas.

For those not familiar with chamoy, the roots of the ubiquitous condiment from Mexico go back hundreds of years with the Chinese see mui, a salted dried apricot. Chamoy is a mix of chili, salt, sugar and citric acid, and many recipes include jam or fresh fruit.

Its rise to popularity in Mexico truly began in the 1970s with candies produced by Mexican confectioner Dulces Miguelito. Along with candy, some had their first taste of chamoy through the saladito (salted dried fruit). Chamoy is also popular as a seasoning and sauce, which can be thin or thicker and used as a dip.

Blending sweet, salty and spicy and even umami, chamoy dip is often enjoyed with fruit or candy, mixed into a beverage (such as a michelada) or use to rim the top of a beverage can or glass.

For sisters Jenilee Sanchez and Jaylene Valenzuela, it was the dip that led them to start Hermanas Chamoy. While self-quarantining earlier this summer, the pair enjoyed drinks together with a chamoy they developed and then shared on social media.

"We didn't think people would be that interested in it," Sanchez said of their chamoy blend. "In our minds, it was a joke. We were putting it on our Snapchat and literally the next day, people asked, 'How can we order and when could we order?'"

By early July, they had created a label, set up a Venmo and started packaging their dip.

Starting with an original chamoy flavor and watermelon, they now also offer strawberry, tamarindo, sour green apple and mango. Dips are $9 each.

"From our experience, they like it with beer. It's not so sweet, the sourness works well."

Hermanas also offers a keto chamoy ($12), which was highly requested for those avoiding extra carbs.

"Our keto is completely homemade," Sanchez said, noting they blend their own chili mix for the dip. "Our fruit base is a keto-friendly fruit. It's very low calories, no carbs, no sugar."

The sisters have found that working together is good for business and their bond.

Sanchez said, "We don't live together so we realized that spending more time together, we don't get on each other's nerves as much."

"We started it out for fun and we really appreciate everyone who has supported us and continues to support us. It’s not something that we expected and it’s a nice surprise."

A personal bond also helped Dos Amigas get off the ground. Monica Avalos started the chamoy business earlier this summer with a friend (who is no longer involved) after making the tantalizing dip while they were on furlough.

While hanging out for drinks, they decided to spice things up by Googling chamoy and experimenting with their own concoction.

"We bought some mangoes and thought, 'How would it taste with real fruit?' We had tried some with just sugar but this was 10 times better. That was our 'wow' moment."

The looming specter of student debt for an MRI training program motivated the pair to launch the business.

"We started enrolling ourselves and realized how much tuition was," Avalos said.

For Dos Amigas' customers, the spice is very nice. After finding their pineapple jalapeño flavor wasn't balanced enough, they developed a mango habanero dip, which Avalos said people went bananas over. That led to another experimental flavor.

Avalos said, "We came out with watermelon and we had a few people suggest spicy watermelon, mixing watermelon with the habanero. People said, 'Hey give it an extra kick.' Now it's one of our bestsellers."

"We want to keep switching it up," said Avalos, noting the next poll will be between guava and strawberry.

Along with the dip ($6), the pair sell gummy peach rings and gummy worms ($4 each) tossed in the chamoy.

Dos Amigas relies on preorders to keep on top of production for the week.

For now, Avalos is staying busy with bringing some tasty treats to the community.

Avalos said, "We've been really surprised and amazed by people supporting us, telling us how great it is."

"We hit 600 followers on Instagram in a month and half. Once people read our bio, they ask, 'Are you really doing this for school?' We say, 'Yeah we're studying now or writing an essay.'"

The word "mui" (梅) literally means "plum" in Chinese, so see mui is not a salted dried apricot, but salted dried plum.

These women are what the U.S. is. Dream up an original something (Think Mr Hewlett & Packard!), do a test run and, if it blows out the door, may they make more and more, and enrich themselves in the process. Alas, TOO many nowadays only want to suck off the gov teet, instead of creating a product. BTW, I am a lib Dem but I believe in creative enterprise, and also am glad for those who do create a REAL product.