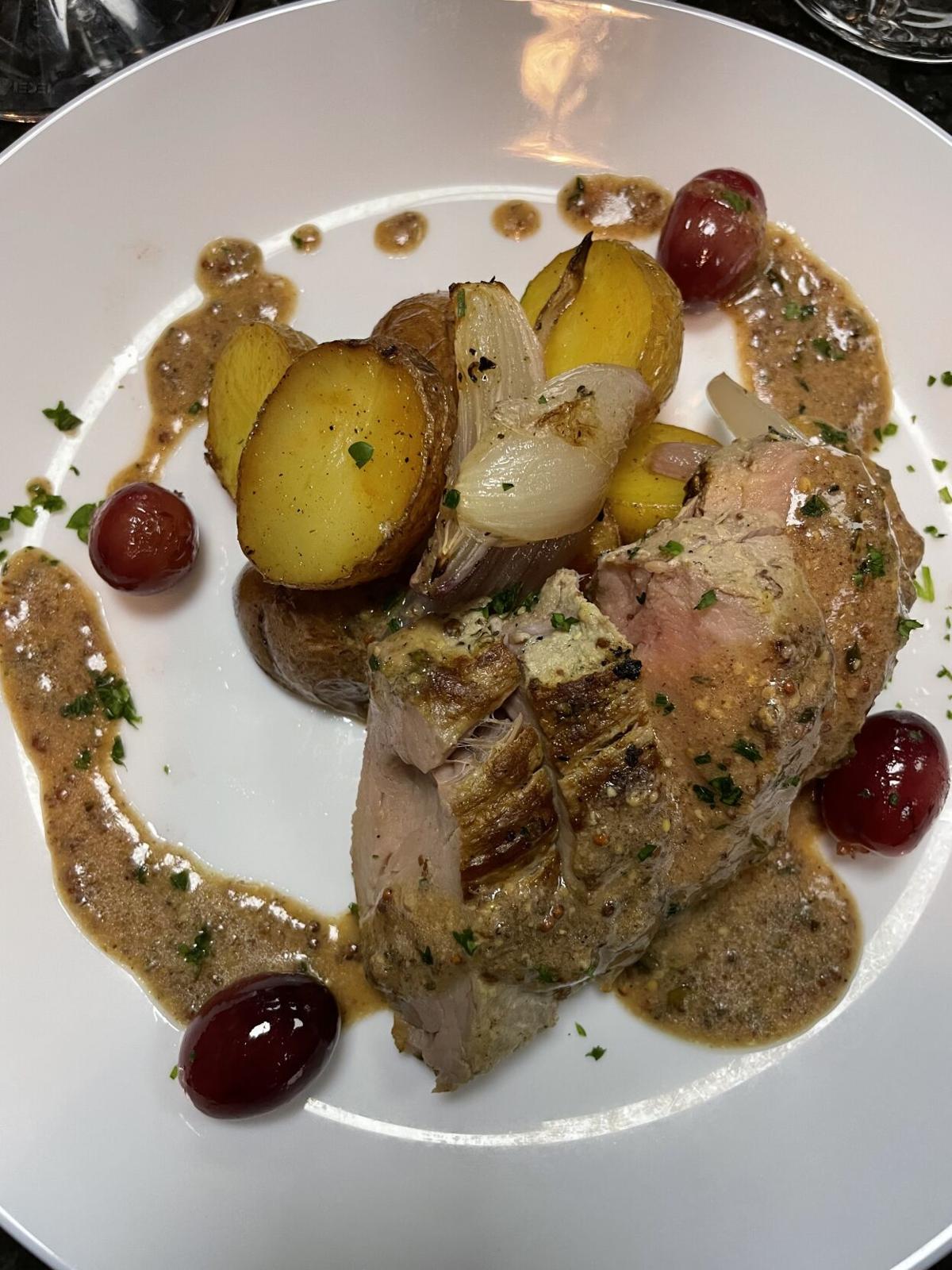 Herb-roasted pork, served with new potatoes, onions and Cattani Farms grapes, was part of The Kitchen’s meet your grower dinner with Cattani Farms in August. 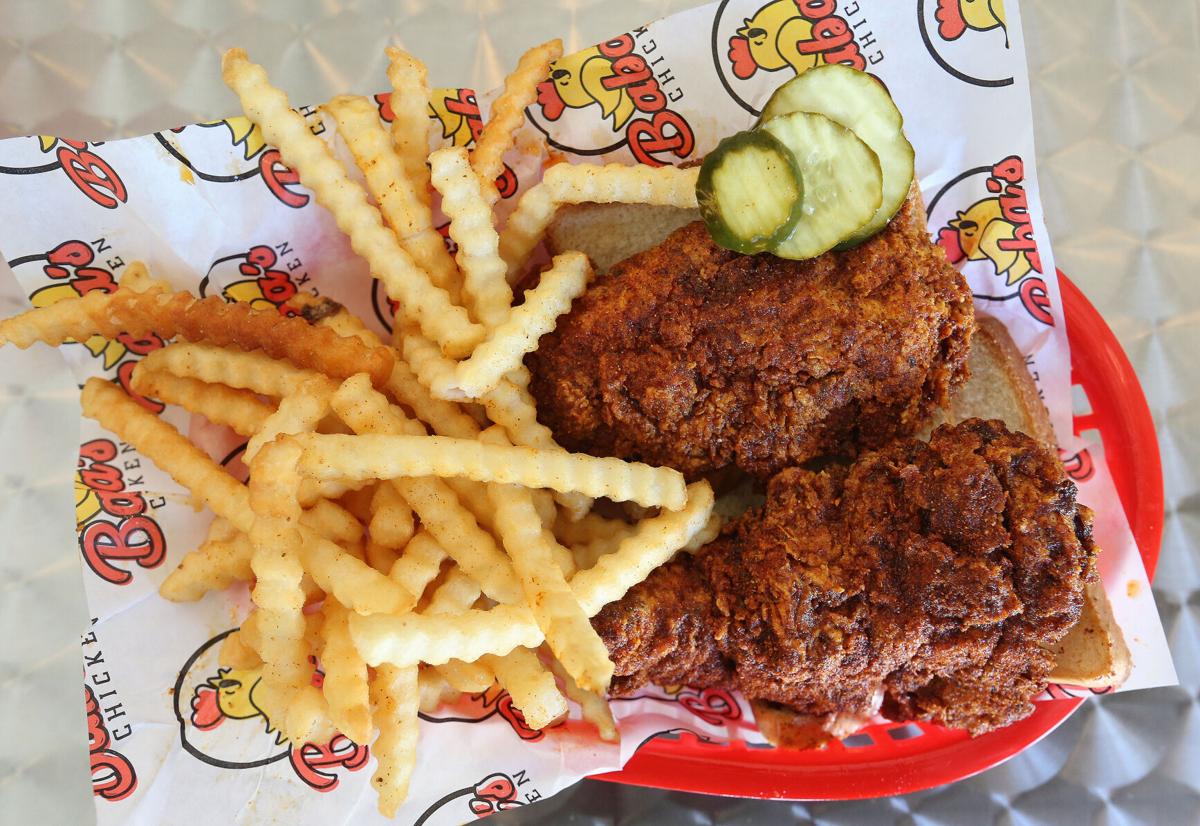 A plate with two chicken tenders and fries is shown at Baba's Hot Chicken. Baba's is just one of the new chicken restaurants that opened in 2021. 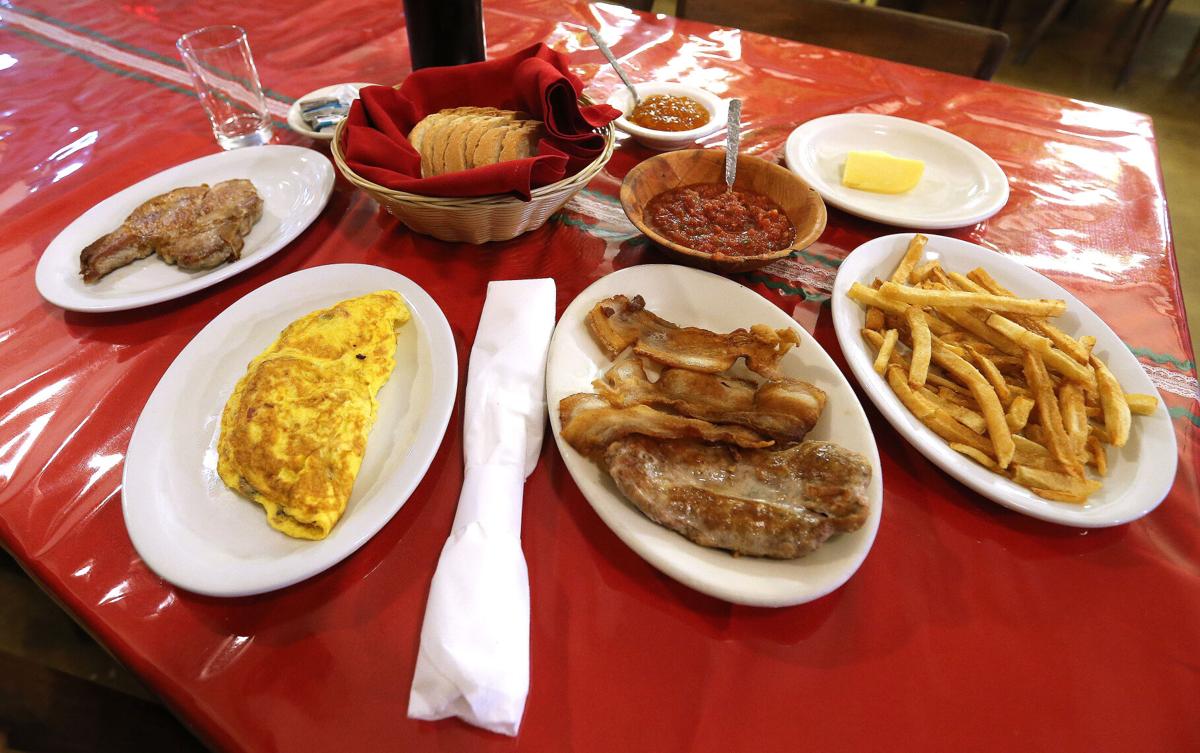 Breakfast at Noriega's includes an omelet, Basque sausage, house-cured bacon as well as a pork chop. New owners took the name, the decor and much of the staff of the Noriega Hotel to carry on a Basque tradition. 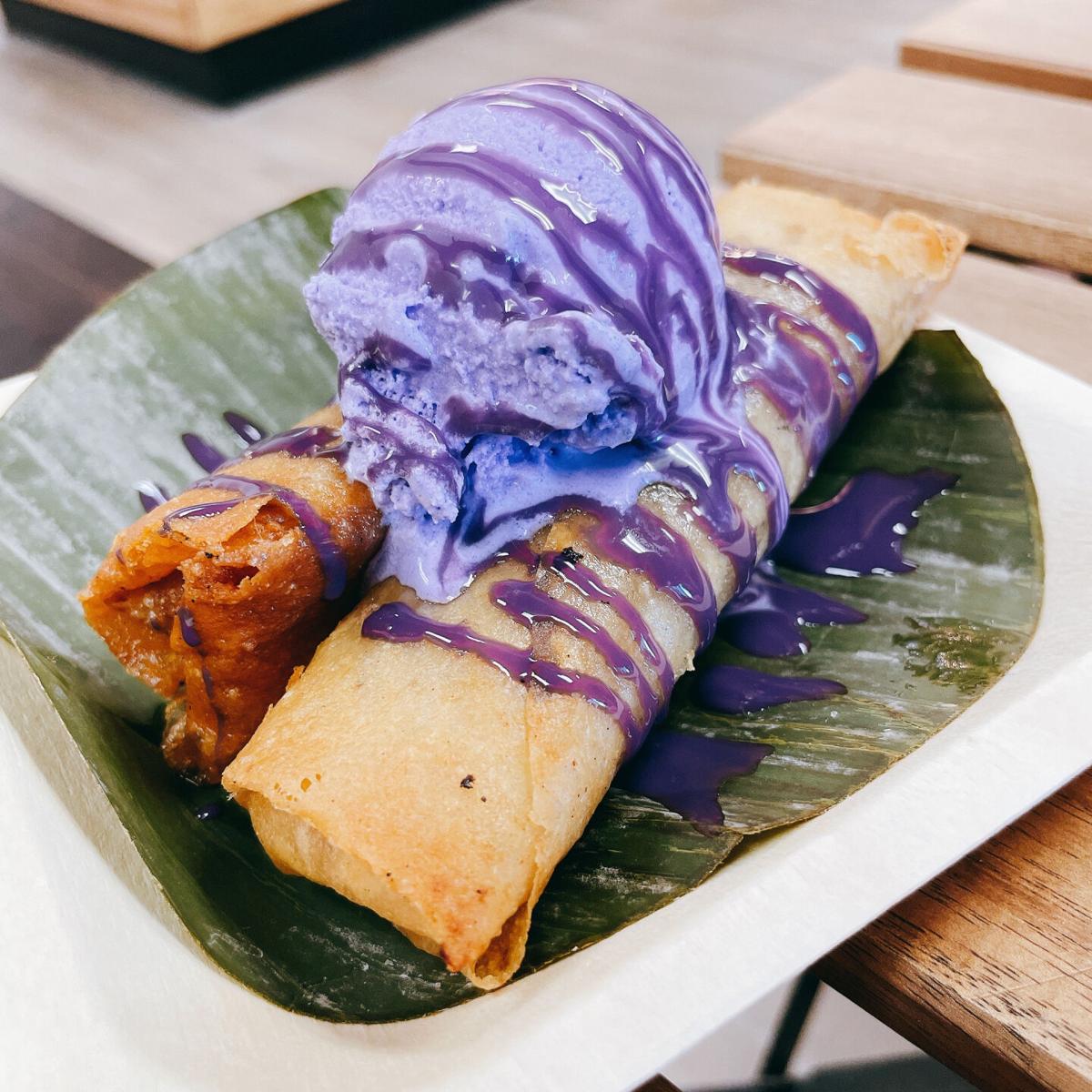 A banana and peanut butter roll with halo-halo ice cream at Umaga Cafe. The family-run cafe specializing in coffee from the Philippines and Filipino dishes is a welcome addition to the local dining scene. 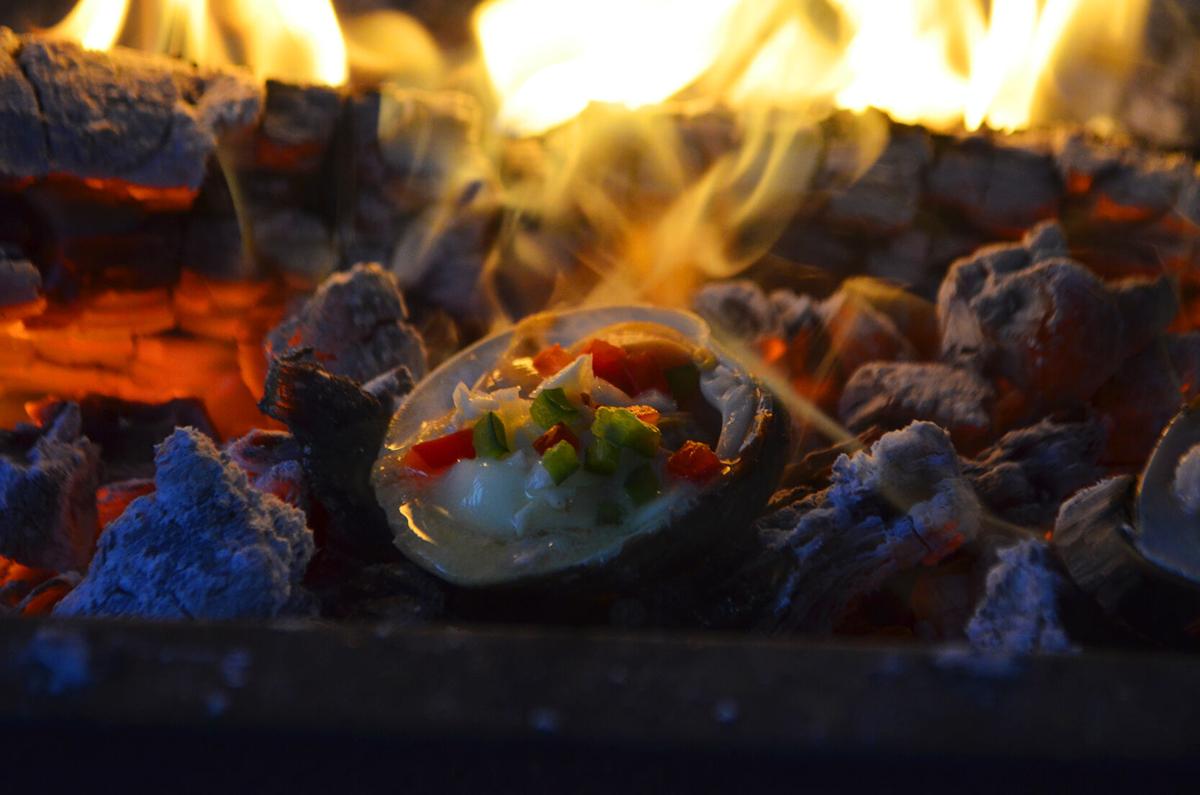 Herb-roasted pork, served with new potatoes, onions and Cattani Farms grapes, was part of The Kitchen’s meet your grower dinner with Cattani Farms in August.

A plate with two chicken tenders and fries is shown at Baba's Hot Chicken. Baba's is just one of the new chicken restaurants that opened in 2021.

Breakfast at Noriega's includes an omelet, Basque sausage, house-cured bacon as well as a pork chop. New owners took the name, the decor and much of the staff of the Noriega Hotel to carry on a Basque tradition.

A banana and peanut butter roll with halo-halo ice cream at Umaga Cafe. The family-run cafe specializing in coffee from the Philippines and Filipino dishes is a welcome addition to the local dining scene.

In many ways, 2021 was a challenging year, but through the ups and downs Bakersfield has continued to eat.

Although that may sound like a criticism, it's actually a testament to our love for restaurants, whether they're local favorites or beloved chains.

As we head into the new year, let's look at some of what nourished us and what we're looking forward to sampling in the months ahead.

Much like the wonderful Outstanding in the Field dinner at Autonomy Farms in 2018, the county had another dining adventure this year. Embers & Ash, a rustic fine dining experience, came to the Kern River House in October, led by Los Angeles-based chef and founder Chris Binotto and his team.

Combining his love of cooking, camping and outdoor adventures, Binotto presented an open-fire cooking demonstration for guests who then sat down to eat and learn more about the menu.

It would be fantastic if the county could host more events like this, whether from outside groups or, even better, local chefs and businesses. Since it seems like we might be continuing to embrace more outdoor dining, this would be an exciting addition to our dining scene.

Special mention must be made for The Kitchen downtown, which is consistently partnering with local purveyors and growers for dinners that connect them with the people enjoying their produce and wares. If you want to truly eat local, this is a place you should check out. (The next meet-your-grower dinner is with WN Citrus on Jan. 7. Visit thekitchenbakersfield.com for reservations.)

Word is out that a fifth Dutch Bros Coffee is opening in town (on South Chester Avenue) but I'm waiting for the Coffee Bean & Tea Leaf, due to open in fall 2022 at The Shoppes at Seven Oaks Business Park. If you're not supporting a local shop — Caffeine Supreme, Blue Oak, Cloud 9, Dagny's, Covenant, Cafe Smitten, etc. — it might be worth a stop at this chain known for its ice blended and variety of iced teas with nugget ice. (That small ice is a hidden gem also enjoyed at many local drive-ins.)

Something to cluck about

As dining columnist Pete Tittl mentioned in his year-end roundup, fried chicken is on fire. In some cases, that's not just the popularity but the heat level of these Nashville hot-style eateries. Joining places like Bucky's Hot Chicken, Angry Chickz and Crazy BBQ, came Baba's Hot Chicken, Fire Wings, Bok Bok Korean Chicken and Stupid Wings. I'd even throw El Pollo Riko in there, which focuses on chargrilled chicken, but we can't eat fried food all the time.

Even the mall has hot chicken with The Coop in the food court. In a town that has always treasured fried chicken (and chicken-fried chicken) at local cafes, this is a protein we can all embrace into 2022.

Just over a year after the Noriega Hotel closed, local restaurateurs Bill and Koie Osathanukhro opened a new establishment in the same spirit. Noriega's, in the old Cafe Med space on Stockdale Highway, kept the name, much of the staff and the decor of the longtime Old Town Kern business (the bar is safely preserved at the Kern County Museum). Understandably there are purists who don't cotton to the idea of these culinary adaptations, but there is something to be said about offering the food that people enjoy and serving a community's needs. With the loss of Basque matriarch Mayie Maitia, whose family still runs Wool Growers, it's a reminder that we should support the businesses that keep traditions alive — as long as the food is still good.

We had some great additions in local dining. Baker's Outpost opened its storefront on Truxtun Avenue, bringing bread, baked goods and grab-and-go items to downtown. The sourdough pizza nights on Wednesdays are also a special treat.

Radio Sandwich popped up — literally — on the scene with residencies at Vests Market and BottleShock Wine & Brew. Owner Miriam Alqaisi is at work getting her own storefront ready to go in 2022. Her unique spin on classic sandwiches and creative vegan dishes are a welcome addition to the local sandwich market.

Tiki-Ko came back strong this year, reopening the flagship bar as well as The Sinking Ship, the downstairs bar with a majorly nautical theme. Downtown was ready for the return of tiki time this year.

One more downtown spot before we venture beyond, the opening of Campo Bar + Bottle was also welcome this fall, adding to the destinations for local wine lovers. Owners Molly Sowers and Willie Rivera are focusing on natural and affordable wines as well as sustainable producers, enhancing rather than competing with existing businesses.

Like Radio Sandwich, Umaga Cafe started with pop-ups before opening a permanent spot on Stockdale Highway by what is now Noriega's (formerly Cafe Med). Owners Jeremy and Jezreel Cruz offer coffee sourced from the Philippines as well as beverages and treats that play with Filipino flavors. The cafe has also ventured into classic savory dishes like chicken adobo and beef tapa as well as fun items like a tocino (cured pork) and jalapeño flatbread. The Cruzes are also still taking part in pop-ups as well as hosting local businesses at their cafe.

Another great addition this year was Flame & Fire Brazilian Steakhouse, which specializes in churrascaria cuisine, offering a variety of meats carved tableside by servers. Keep a lookout for a dining review this month.

This last year also brought some interesting partnerships on the food and beverage scene. In February, nonprofit Children First launched Nixtamal, a subscription box of baked goods, highlighting work from local bakers along with an item from a local artisan.

Its goal is to eventually open a cafe in east Bakersfield that can provide on-the-job training for residents and help develop the culinary and business skills that will serve them in the future.

For its initial offerings, the students of Bakersfield College culinary arts baked the goods. After taking a break through the summer, its November box was a partnership with Emmanuel's Bakery.

Here's hoping the boxes continue and plans for the cafe proceed.

In April, Bring Back the Kern provided a refreshing campaign to bring awareness to its mission to return water to the dry riverbed.

A good cause and good local beer is a natural pairing so let's find another local initiative to support. Or bring back this one in 2022; the results should be satisfying.