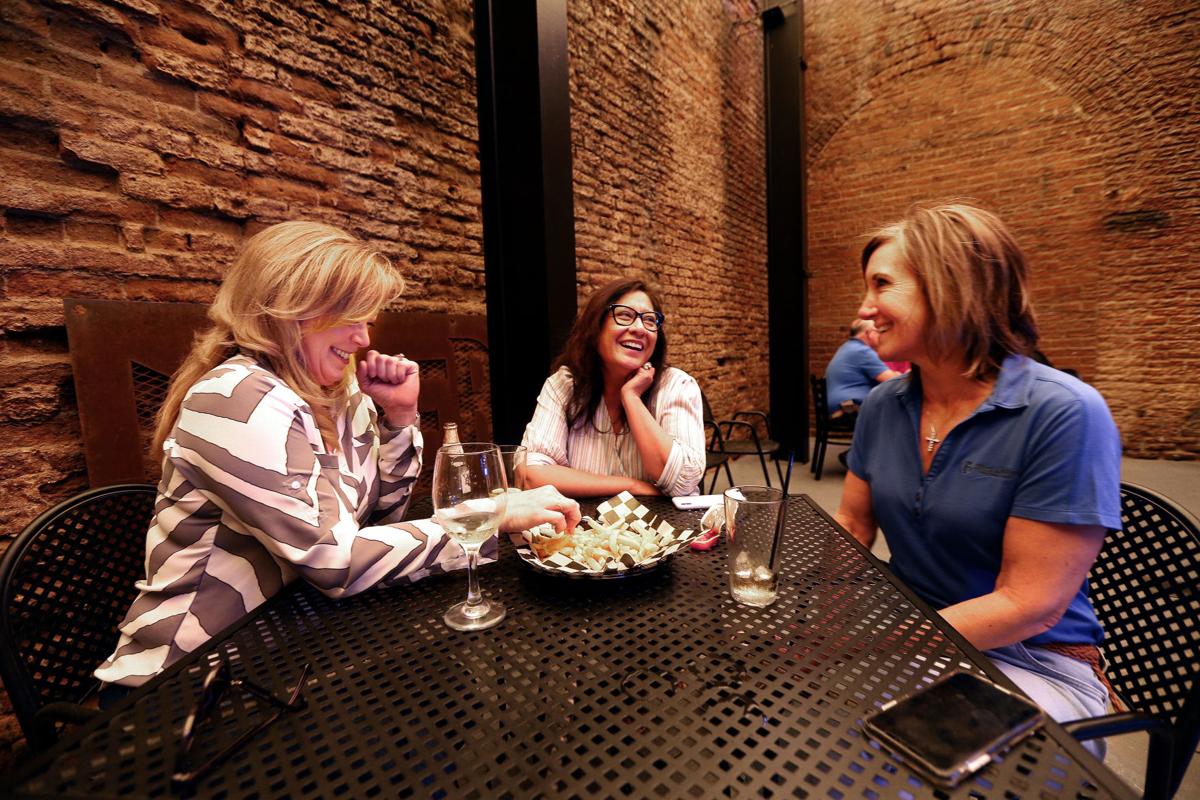 From left, Ricki Peace, Lillian Brust and Julie Sanders share a laugh while dining at Two Goats & The Goose on Friday afternoon. 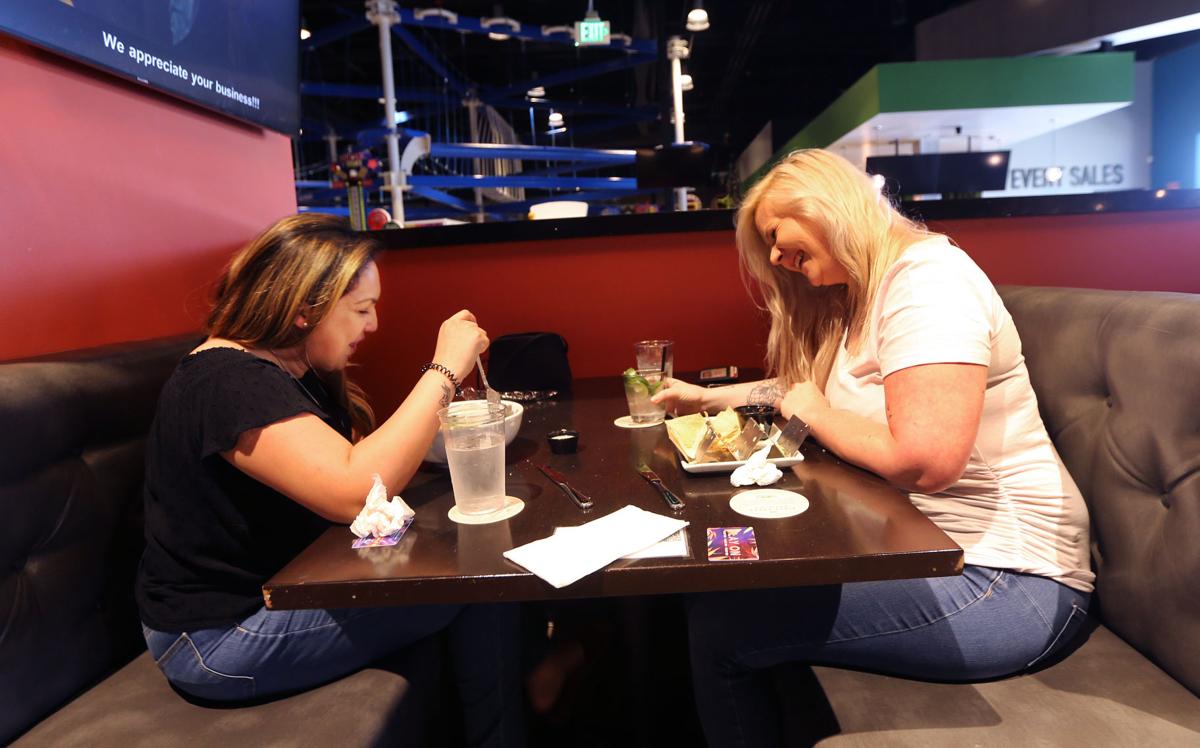 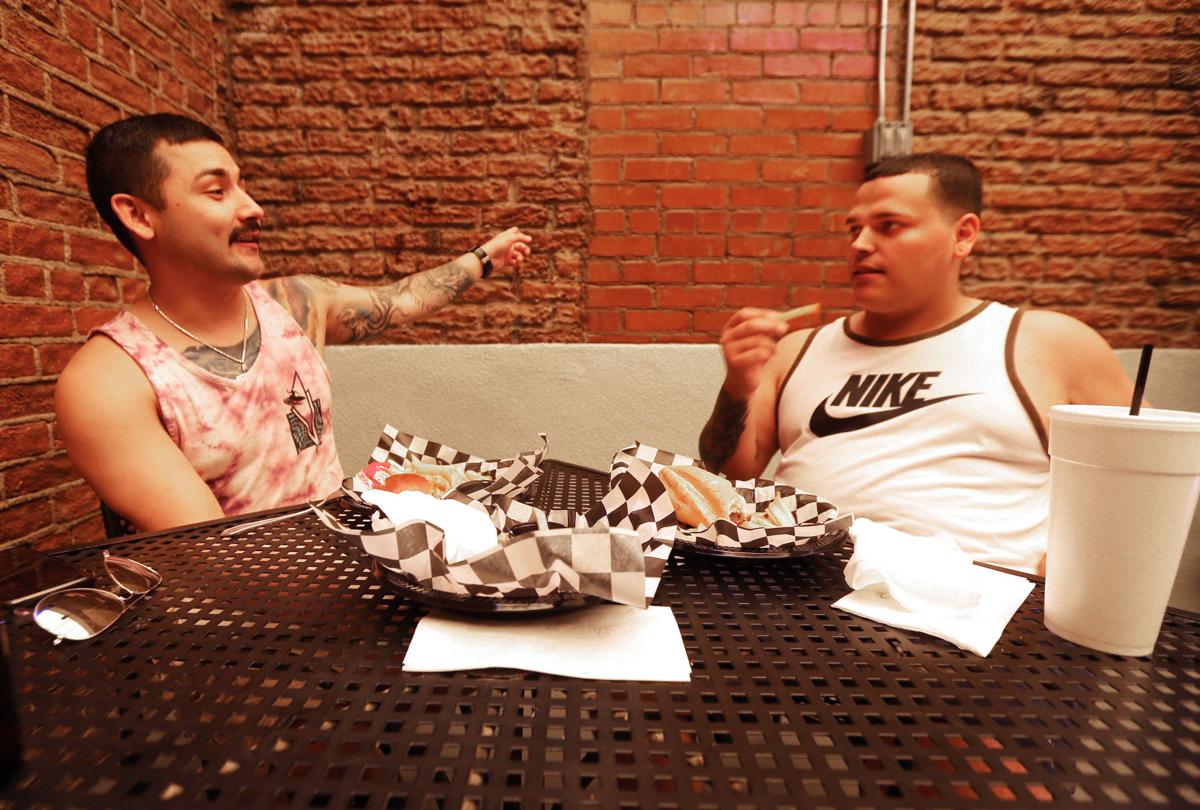 Zachary Cepeda called 11 restaurants before he decided to have lunch with his friend Luis Medina at Two Goats & The Goose on Friday afternoon. 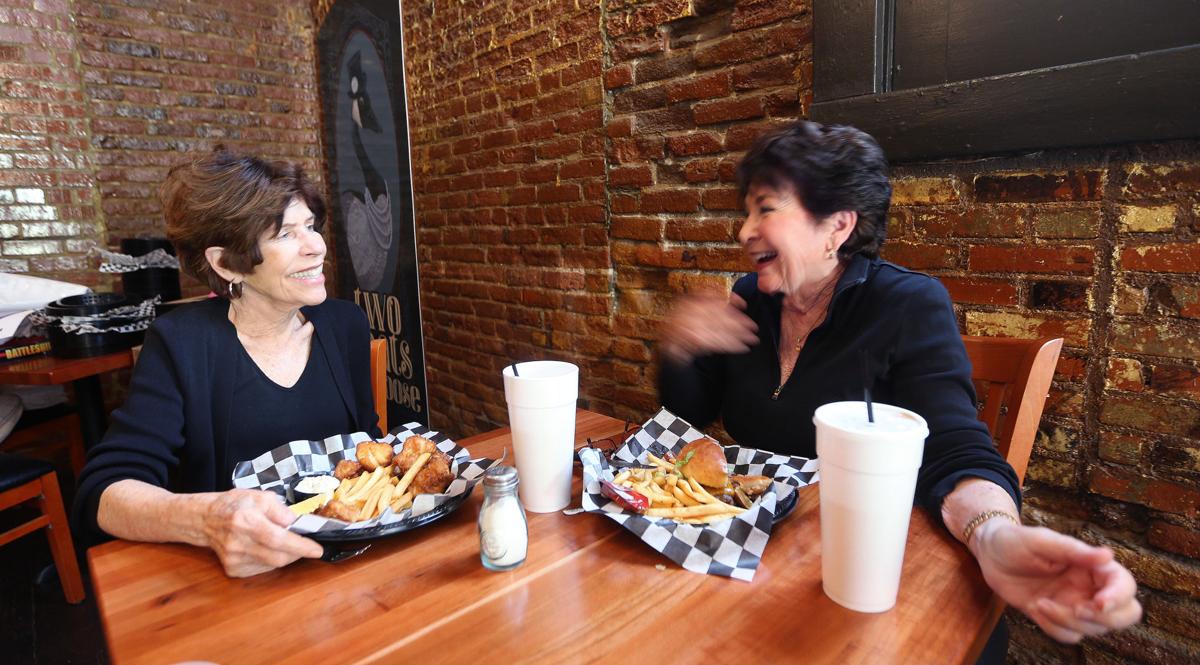 Good friends Sue Brickford and Sue Owens share a laugh while dining at Two Goats & The Goose on Friday afternoon. Brickford said she could not wait to dine at the restaurant owned by her friend Shawna Haddad Byers after dine-in restrictions were lifted.

From left, Ricki Peace, Lillian Brust and Julie Sanders share a laugh while dining at Two Goats & The Goose on Friday afternoon.

Zachary Cepeda called 11 restaurants before he decided to have lunch with his friend Luis Medina at Two Goats & The Goose on Friday afternoon.

Good friends Sue Brickford and Sue Owens share a laugh while dining at Two Goats & The Goose on Friday afternoon. Brickford said she could not wait to dine at the restaurant owned by her friend Shawna Haddad Byers after dine-in restrictions were lifted.

No matter what has changed over the past few months, one thing in Bakersfield has never been in question: We're going to eat.

On Wednesday, local diners regained another option to the ongoing home cooking, delivery and takeout when the county was approved to reopen for dine-in business.

Allowed to reopen their dining rooms to the public if they implement certain guidelines, a number of Kern County restaurants were quick to meet the growing demand.

"I think a lot of people want to go back to their routine and the balance of their lives," said Shawna Haddad Byers, owner of Two Goats & The Goose, which reopened Thursday.

The restaurateur, who has owned a number of eateries downtown over the years, said the timing was great since business for Memorial Day weekend is traditionally good.

"Someone pointed out that it's the only holiday weekend when it’s not blazing hot. Why would we leave town?"

With a current staff of two — Haddad Byers and Neil Swank on the grill — the Wall Street Alley business had an easier time meeting state requirements, which require restaurants to spread out diners to accommodate social distancing, use disposable menus, and require employees to wear masks and undergo temperature checks.

"I removed some tables and chairs out of here weeks ago," she said. "I had put everything away anyway, took out some bar stools."

Adding to her inventory of masks, gloves and sanitizers, Haddad Byers picked up the last essentials this week.

"When the starter pistol went off (to reopen), I just got disposable plates and napkins and printed off some menus."

Diners can circle what they want on the paper menu with any modifications when ordering.

Over at The BLVD, diners can scan a QR code to bring up the menu on their smartphones, one of the suggested options to minimize contact.

Katie Corrigan, the restaurant and entertainment complex's chief operating officer, said she's excited for people to try the new menu, which was finalized just before the shutdown in March.

"When we were just doing curbside, we had a very limited menu," she said. "We're expanding it a little bit and by this weekend it's a full and brand-new menu."

In keeping with recommended guidelines, there is a temperature scan for customers and hand sanitizer throughout the restaurant. Bathrooms will be sanitized every half-hour.

Pool tables, not in use, have been moved aside to help open up space around the dining areas, which include the two established sections as well as two party rooms that have been repurposed for dining.

When the restaurant opened its dining room Thursday, Corrigan said they had some diners trickle in: "It hasn't been our best lunch, but there are definitely people in here now."

Much like when The BLVD reopened for takeout earlier this month, they're taking it as it goes.

"Takeout business was OK. It was hard because we didn’t know what to expect."

That uncertainty also lingers as the venue awaits approval for Stage 3, which will allow The BLVD's entertainment options to reopen.

"We're hoping the governor speeds up the opening because we won’t be able to survive. ... We're so different than any other entity, since we have an arcade and bowling,” she said

In a hopeful gesture, customers receive a $5 game card for later use in the arcade.

Corrigan said the federal Paycheck Protection Program has been vital to keeping operations going, including bringing employees back.

She's optimistic that fixes to make the program more flexible for business owners, which are supposed to be voted on by the House of Representatives next week, may give them some breathing room.

"I don't know what the future looks like to be honest," he said, noting the loan flexibility the act proposes "would help the business weather the storm longer."

Bynum said the first day was good with "tremendous positive feedback" other than one complaint from a man who was told if he wanted to order another beer, he would have to order food.

Customers can order just beer for takeout but currently must purchase food to drink for dine-in business, under state guidelines.

It was not difficult for the 19,000-square-foot restaurant and brewery to space out its tables for the required 6 feet of social distancing and set up two lines for people to come up and order. (A hostess seats incoming guests.)

"We're just blessed to have a huge space. It does make a huge difference."

Noting this pandemic has been a "catalyst for huge changes" for restaurants to survive, he said many business owners have remained nimble.

Early in the shutdown, Lengthwise was able to help Temblor can and label the beer it had in tanks so it could be sold more easily. Temblor also was able to start distributing in Los Angeles, a move that had been in the works.

Frugatti's is another local business that has adjusted to the changes, seeing its takeout business thrive in the pandemic.

Planning to resume dine-in service on Tuesday, Fruguglietti said he wasn't rushing to shake up business.

"There are things that we’re trying to finalize," he said. "I don't want to open and get overwhelmed. Or get a mixed response because we're doing such a high volume of takeout."

With staff training coming this weekend, the reopening plan also includes the addition of more iPads and computers to facilitate takeout business. Fruguglietti also is working with the landlord on designated parking spaces for takeout customers.

The restaurant will continue to offer family dinner packs for those who feel more comfortable with takeout.

"In hospitality, you do whatever it takes to make your guests feel welcome."

As more restaurants reopen for dine-in service, business owners urge people to be patient and to continue their support.

Bynum said he worries many businesses won't outlast this pandemic, but that there's still a glimmer of hope.

"Bad things are happening to us, but there are good things that can come out of this. There is a lot of silver lining stuff that could happen and will happen. ... People aren't going to take some things for granted anymore. It’s showing everybody what is important."

Waiting for the check. What once was an inconvenience in the dining world has returned as more of an unintended welcome return to some sense o…

Masks in restaurants convey a message that the place is infected. People associate Masks with pollution and germs. That is why masks are worn. It is last thing one wants to see when eating. Masks are very anti social.

You know nothing of the reason to wear masks.

I suggest you stay home order food to be delivered and, for heaven's sake, don't wear a mask, ever. All those others who do? They're simply sissies. Not like you.

I totally disagree. Masks must be the new normal. I was appalled when I was taking out at Moo Cafe last night and none of their employees were wearing masks. I won’t be back until they do. Not wearing a mask is not antisocial. In fact, it sends the message that you care about others more than yourself. Not wearing a mask at this time is the epitome of antisocial behavior.

Ridiculous, Claudia. Read the latest from CDC. Dig to get the useful information the media refuses to share, including information regarding true mortality rates. Look this stuff up rather than blindly trusting. As a mask-shamer, you are part of the problem and helping perpetuate the biggest fraud ever perpetuated on the American public. This situation has, though, helped to highlight the true hypocritical nature of the Democratic party.

Or the Republican Party depending on your point of view.

What.??? Now it is about the Democratic party. I wondered when the crisis would become political. It is on May 23 by Independent Voter.

"ALWAYS TAKE CARE OF WHAT'S YOURS

A MAN'S WORTH IS MEASURED IN OUNCES

HARD WORK IS CELEBRATED EVEN HARDER

None of the people pictured look nervous. Seriously ‘deeb, do you project your nosophopia onto everything?

And I agree- all of these people look like they are having a great time- no nervousness at all...