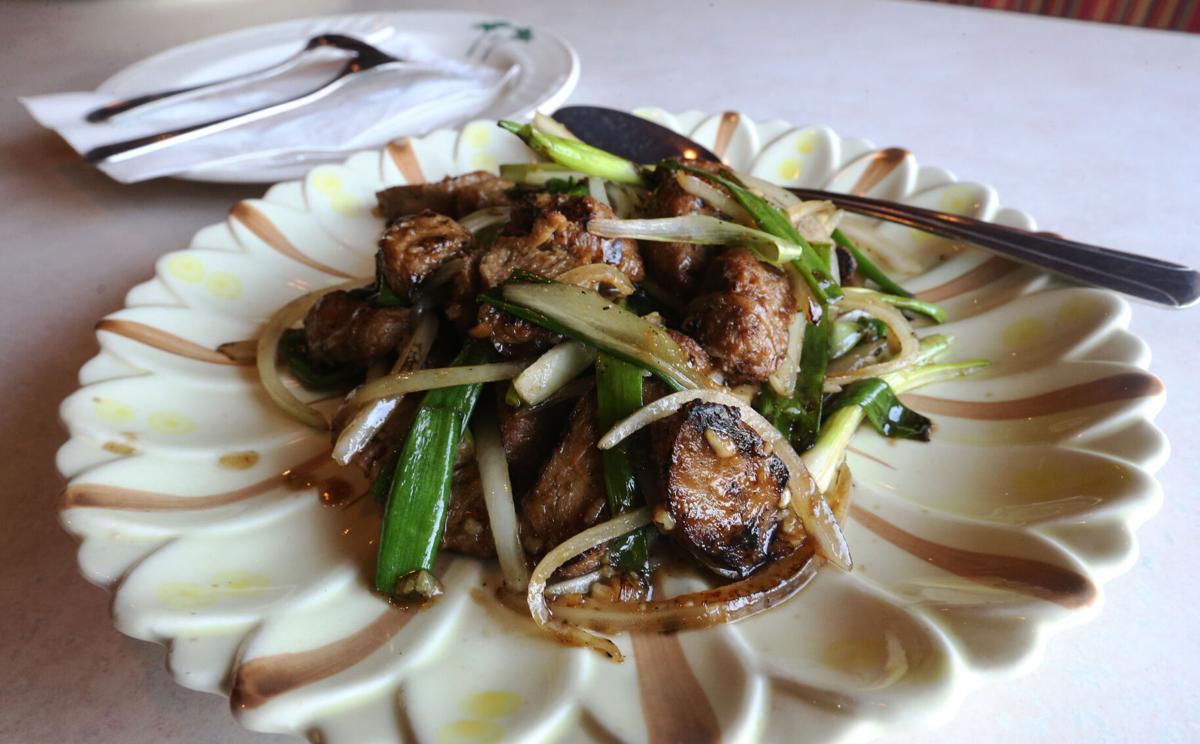 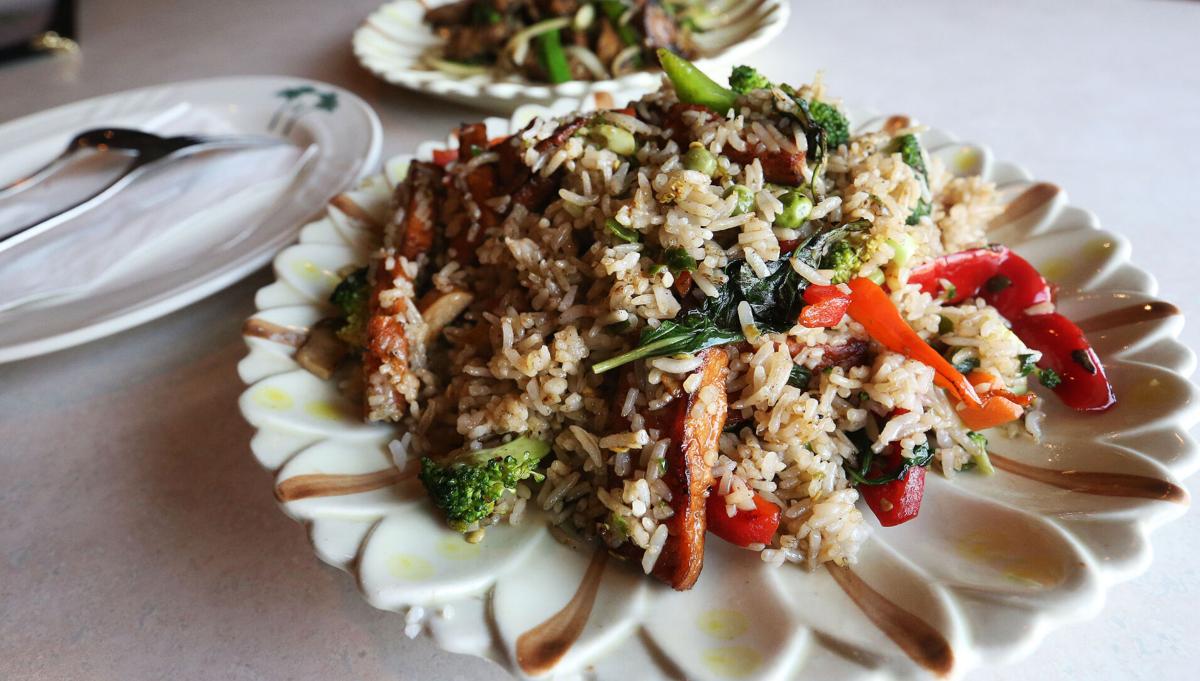 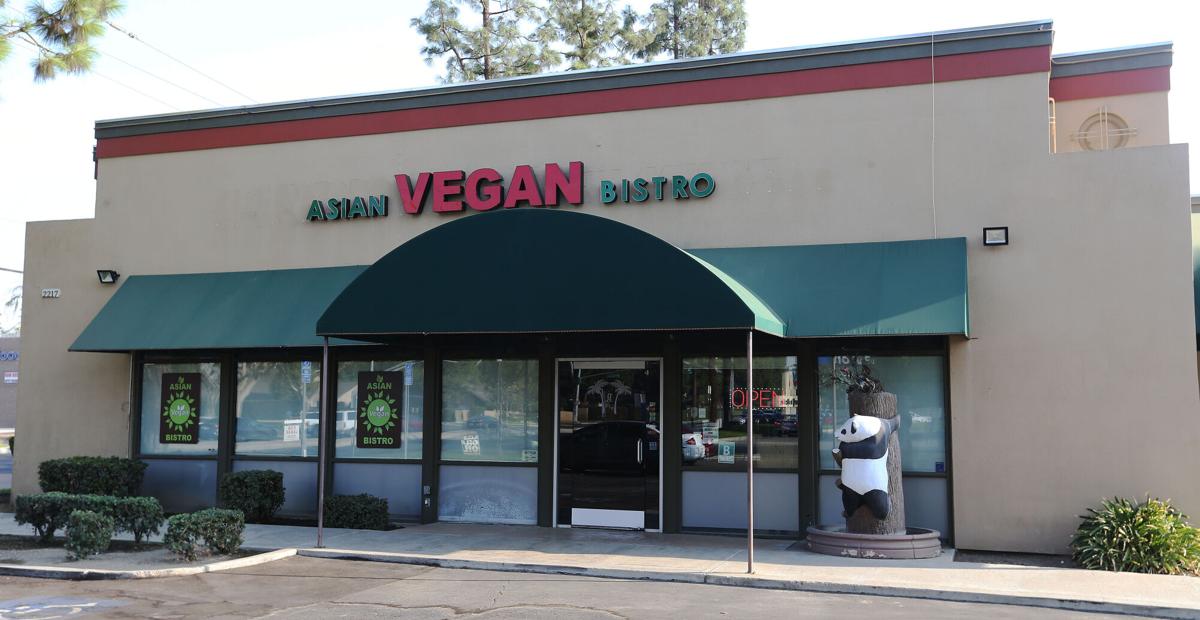 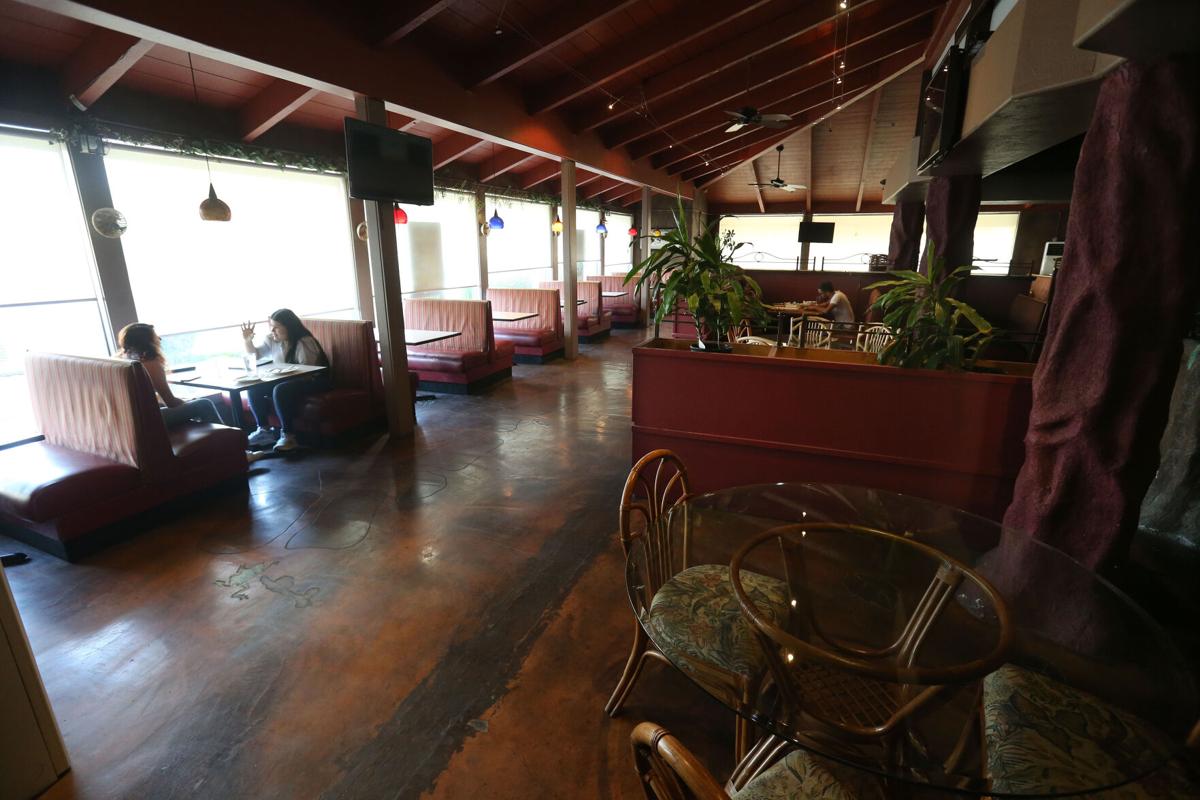 The dining room decor is simple at Asian Vegan Bistro, which took over the space previously home to Shangri-La Asian Bistro & Bar. 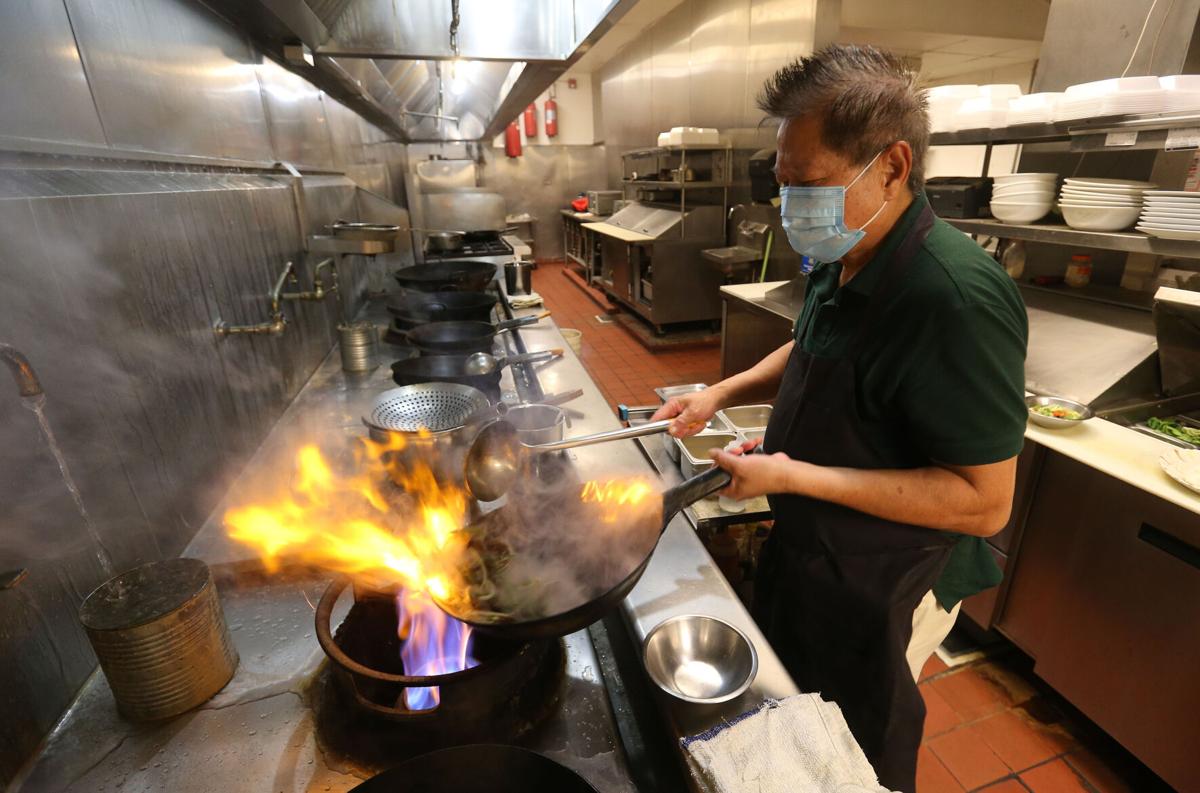 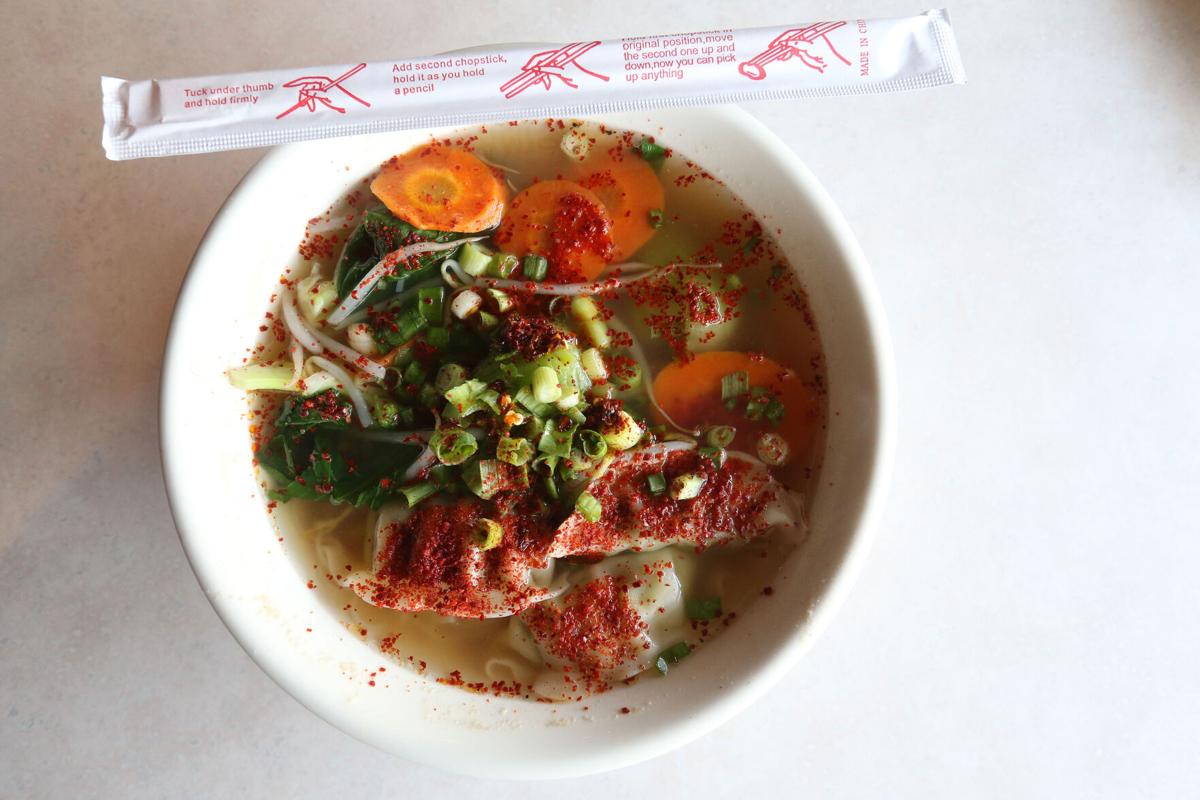 The dining room decor is simple at Asian Vegan Bistro, which took over the space previously home to Shangri-La Asian Bistro & Bar.

We are, all of us, so lucky to be alive today.

Now a glance at the front page may make you think I'm bonkers, but there are so many good things going on that don't draw the headlines. And one of those is the advances in technology that make a plant-based diet appealing. It's an exciting time to be eating food that is not only healthy for you but tastes great.

I say this as someone who endured the wretched soy-based burger substitutes back in college cafeteria days and concluded that people who willingly embrace vegetarianism must lack taste buds.

Flash forward to today when the various meat substitute burger patties to me taste better than many ground beef patties, especially those from fast-food restaurants, and the emphasis on improving the taste of vegetarian choices is impressive. The future is bright indeed.

The old rules don't apply. We loved the food at Vida Vegan when it opened and there is now a new local restaurant, Asian Vegan Bistro, that can offer food that is just as appealing. Located at the corner of Ming and Ashe, the space had previously been Shangri-la Asian Bistro & Bar but had attracted so few customers that I occasionally got emails asking me how it was possible they were staying open. Patience maybe? Nonetheless the format change a few months ago is welcome, especially given the quality of what we sampled.

Some might wonder if this city is large enough to support both vegan restaurants. A consumer research company called Piplsay found that 39 percent of meat eaters and 15 percent of vegans/vegetarians have tried the plant-based meat substitutes at popular fast-food chains. Sure, curiosity is natural, but what was more impressive is that 60 percent of those told the company they would continue eating fake meat at these restaurants, mostly for health reasons. I think that's a pretty bullish sign.

And there is something of a mission statement on one of the pages in Asian Vegan Bistro's menu. They point out they use no MSG, eggs, honey, food coloring or dairy products in any of their offerings. They tout the health benefits of beetroot, spinach and Thai herbs, as well as the benefits of a vegan diet, which includes lowering blood pressure, cholesterol and the risk of Type 2 diabetes.

We ordered a green papaya salad ($9), the Thai spicy fried rice with "BBQ pork" ($10) and the spicy dumpling noodle soup ($12) with those veggie potstickers in it.

As a batter we went two for three, striking out only on the papaya salad. It was puzzling. We've ordered this in regular Asian restaurants and it's a great coping mechanism for a typical August Bakersfield day, the light strands of shredded papaya with peanuts, a bit of sugar and, in this case, according to the menu, lime juice and fresh Thai chili. Yet it was completely brackish. You know it's really salty when people whip out that word. I'm not sure what happened at all — I wasn't picking up soy sauce and why would that be there anyway? Couldn't blame it on the peanuts, as they were in a pile on the side. Most puzzling.

Let's get to my absolute favorite, the spicy fried rice with the "pork." It looks like what they did was cut tofu into thin strips, coat it with a barbecue sauce then grill it over an open fire. Wow, that was artful. Yeah, I'm not gonna swear off the actual barbecue pork from Salty's, Angry Barnyard or Pork Chop & Bubba's, but it was so good.

I saved some to reheat it the next day and it passed the leftover test, too. The rice wasn't too greasy, there were green onions, peas, carrots, fresh red and green peppers mixed in. I'd order it in an instant.

Also impressive to me was my companion's spicy dumpling soup, which had bean sprouts, baby bok choy, broccoli and carrots mixed in. I'm pretty certain it was a vegetable broth, but as with the rice you did not miss the meat if you're a carnivore. And the dumplings, well, we've had veggie potstickers before and if you put a bit of mushroom in the mix it has the substance of taste and mouthfeel that you hope for in such a creation.

I'd order it again, especially on a hot winter night. The spiciness was pronounced but not offensive.

Some things to note: Don't expect a fancy interior, as it seems that's a matter for the future. It doesn't look recently remodeled. There is currently no alcohol served. And on the weekday night we visited, we were the only customers.

The restaurant is closed on Tuesdays, but open for lunch and dinner the other days of the week.

If you're trying to find good plant-based foods, Asian Vegan Bistro is truly worth a visit.