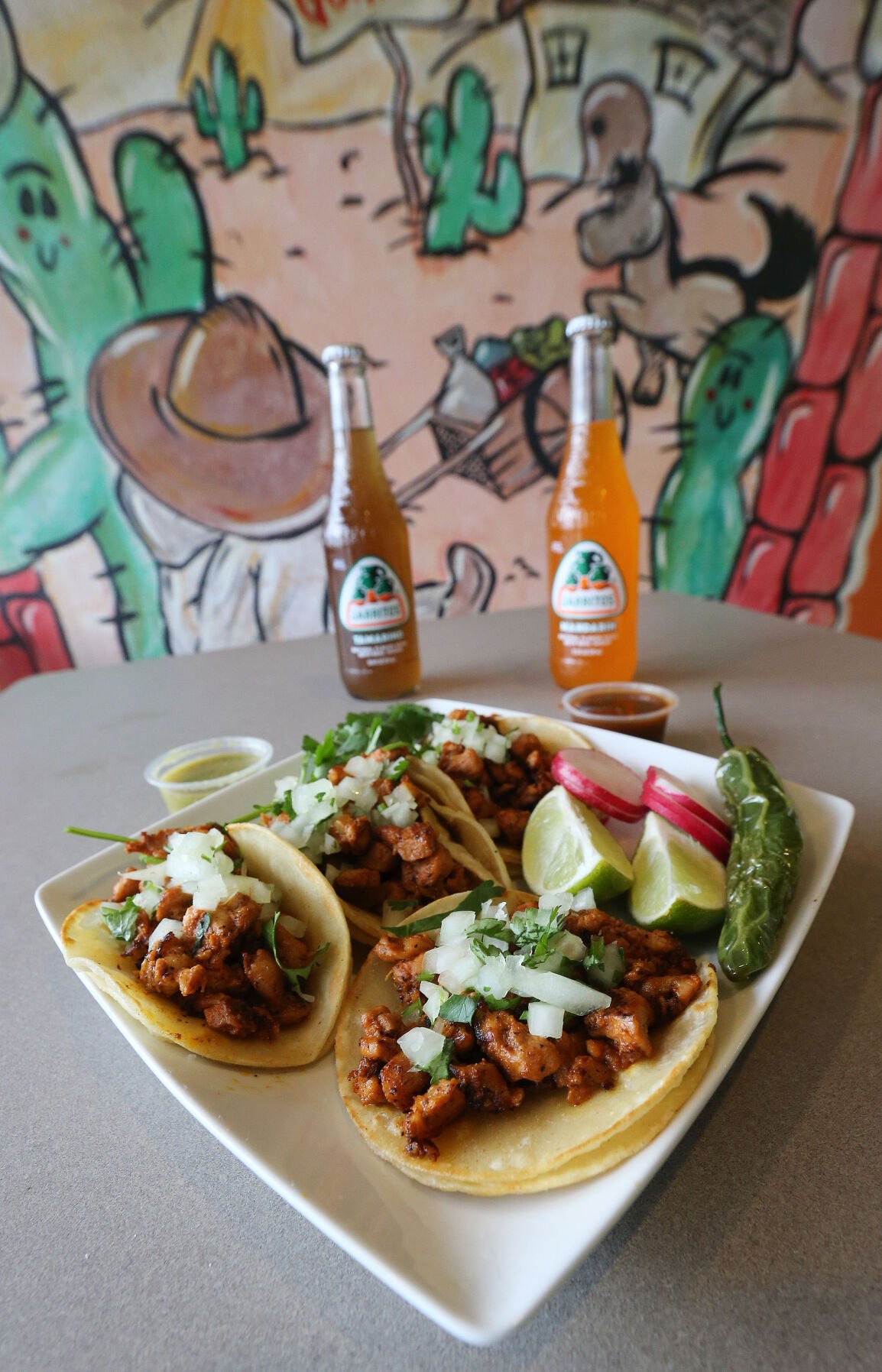 It's taco time at Guapo's Taco Shop, which offers a variety of proteins and meat alternatives. 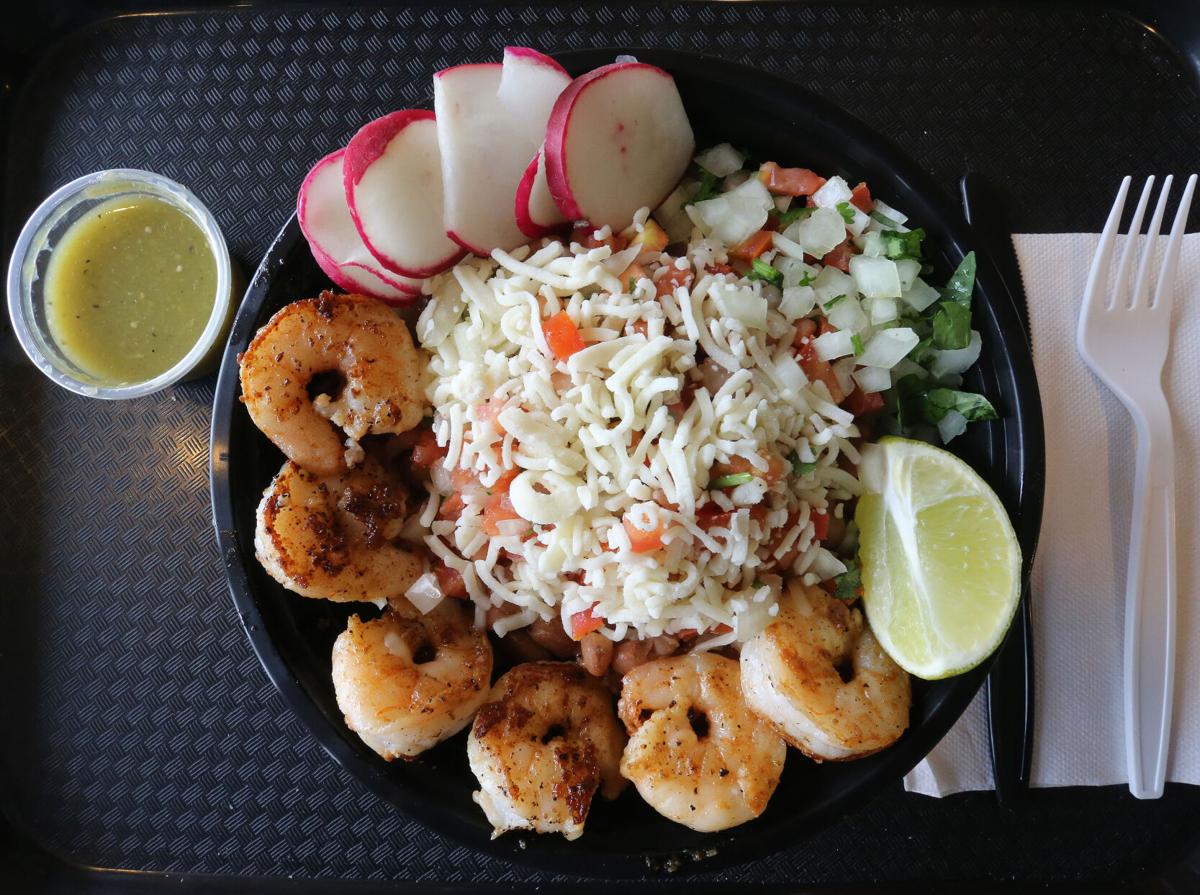 The shrimp bowl at Guapo's Taco Shop comes with with rice, beans, pico de gallo, vegan shredded cheese and salsa on the side. 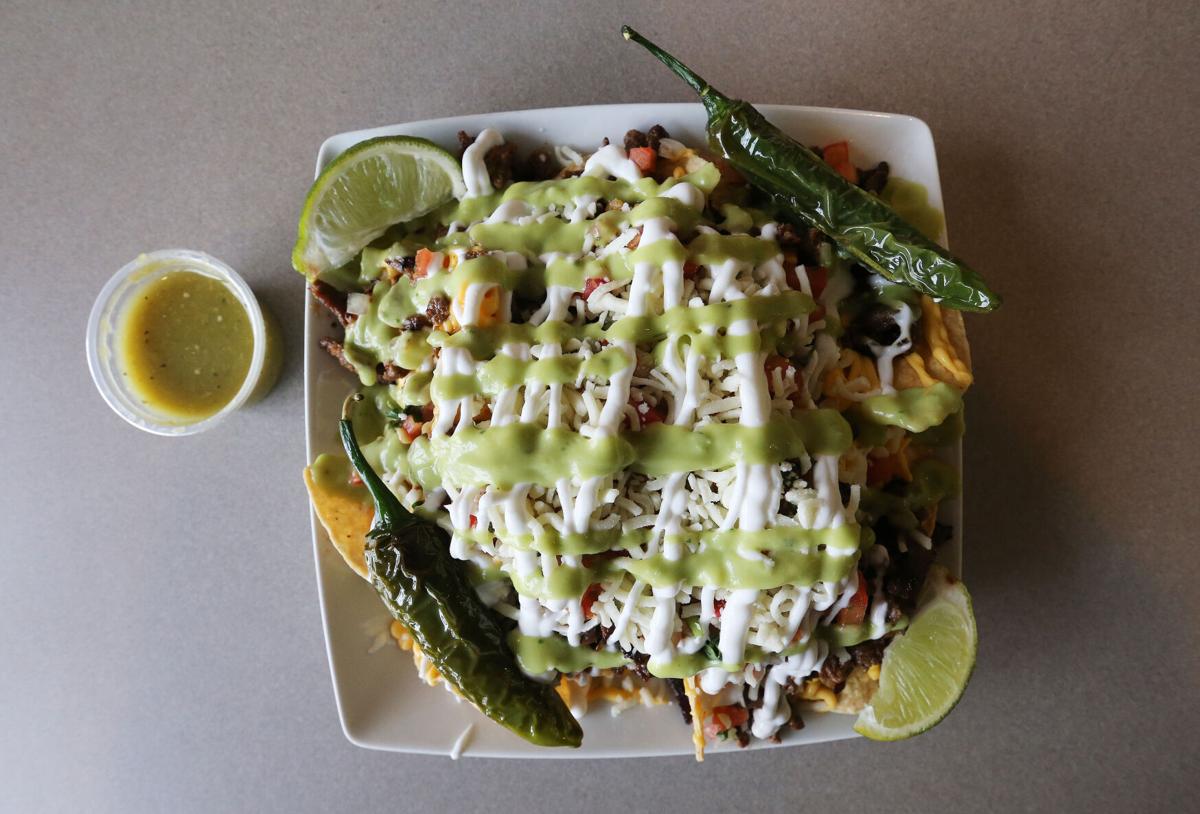 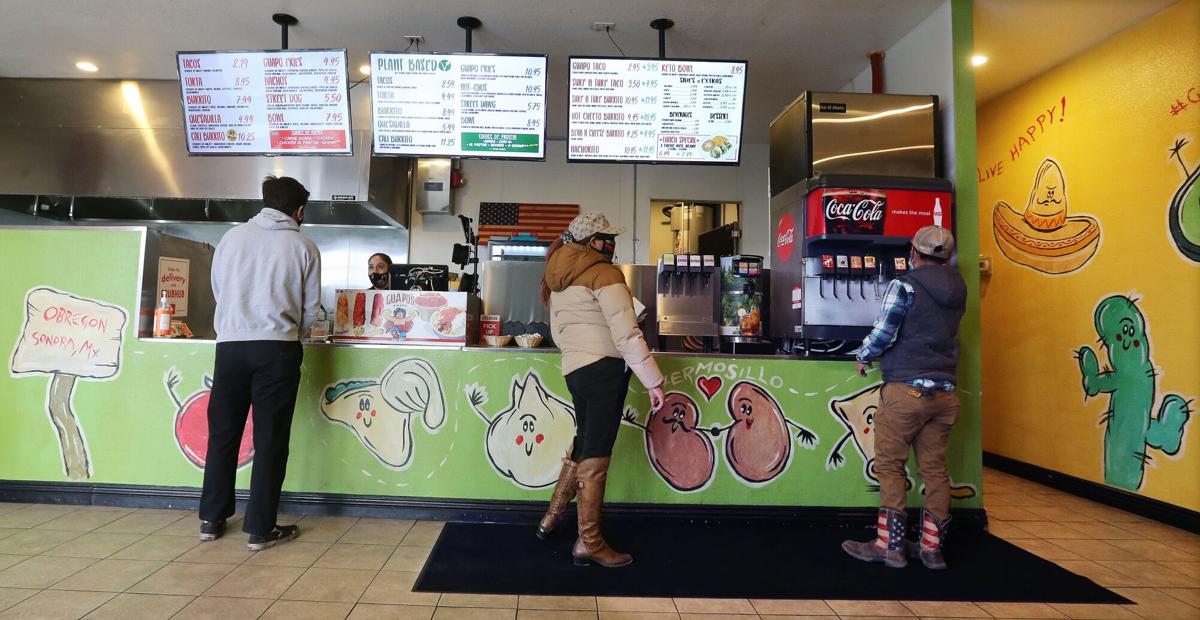 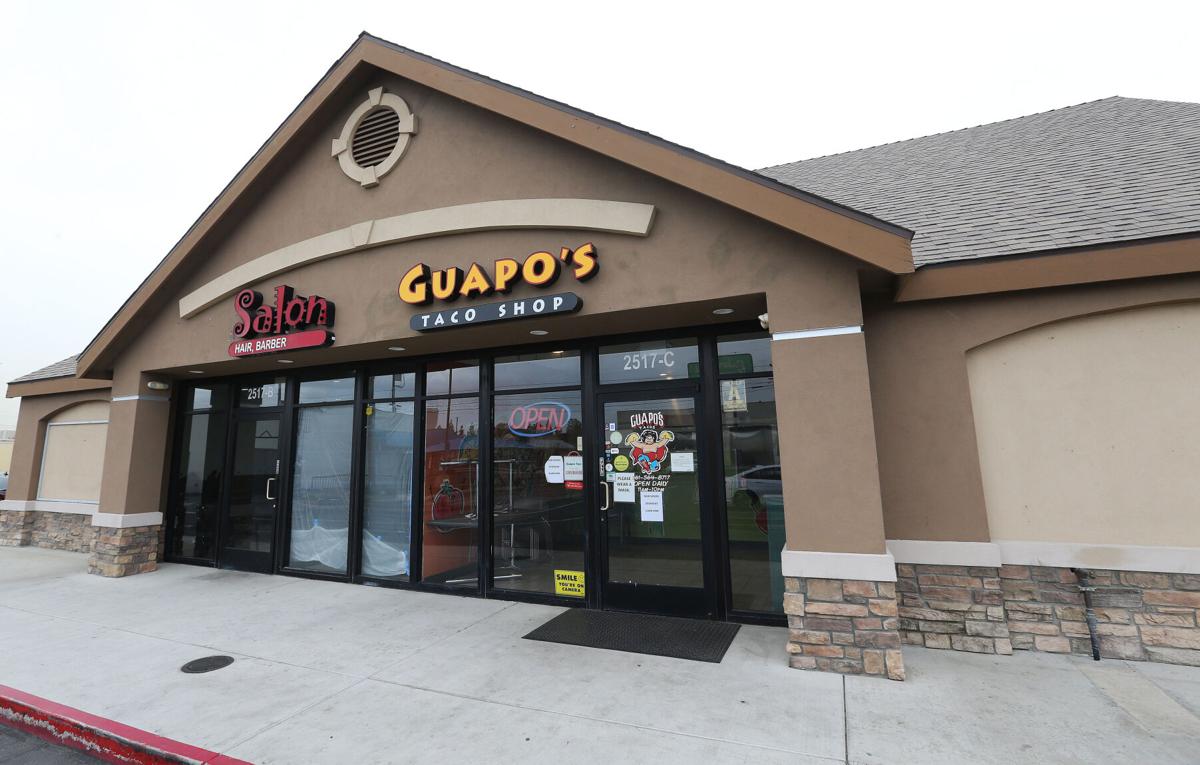 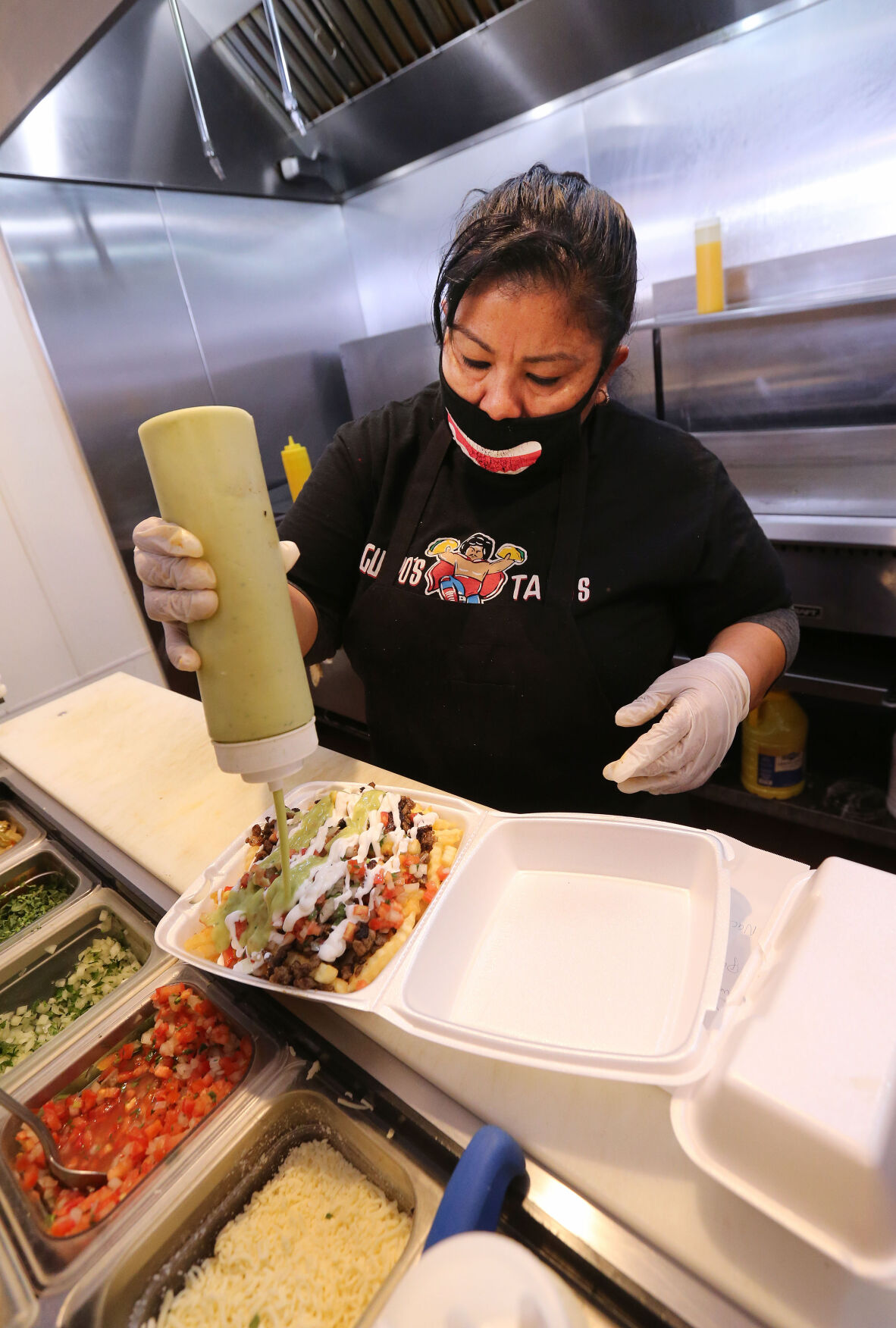 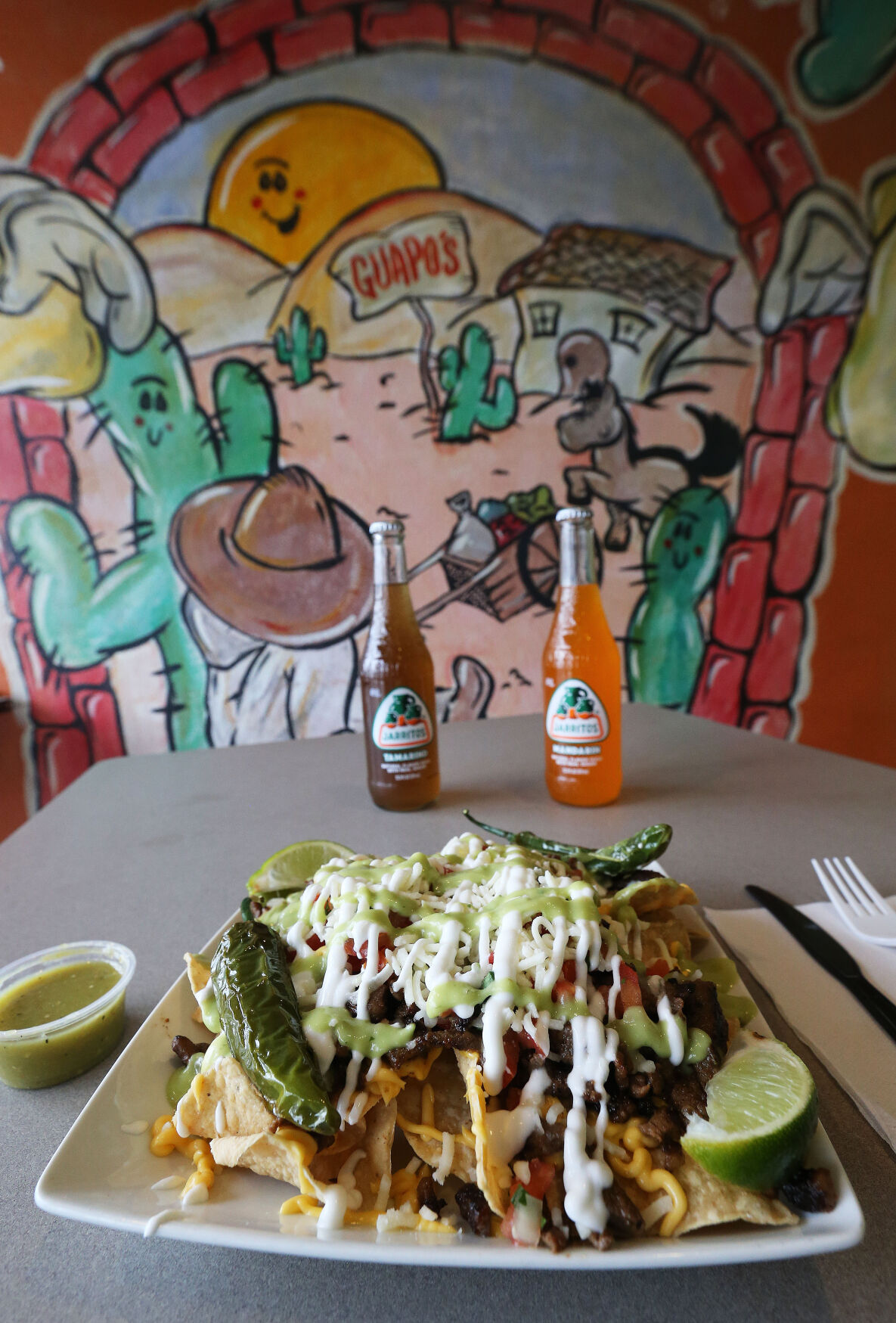 Festive murals set the scene at Guapo's Taco Shop with Jarritos and an order of nachos in the foreground. 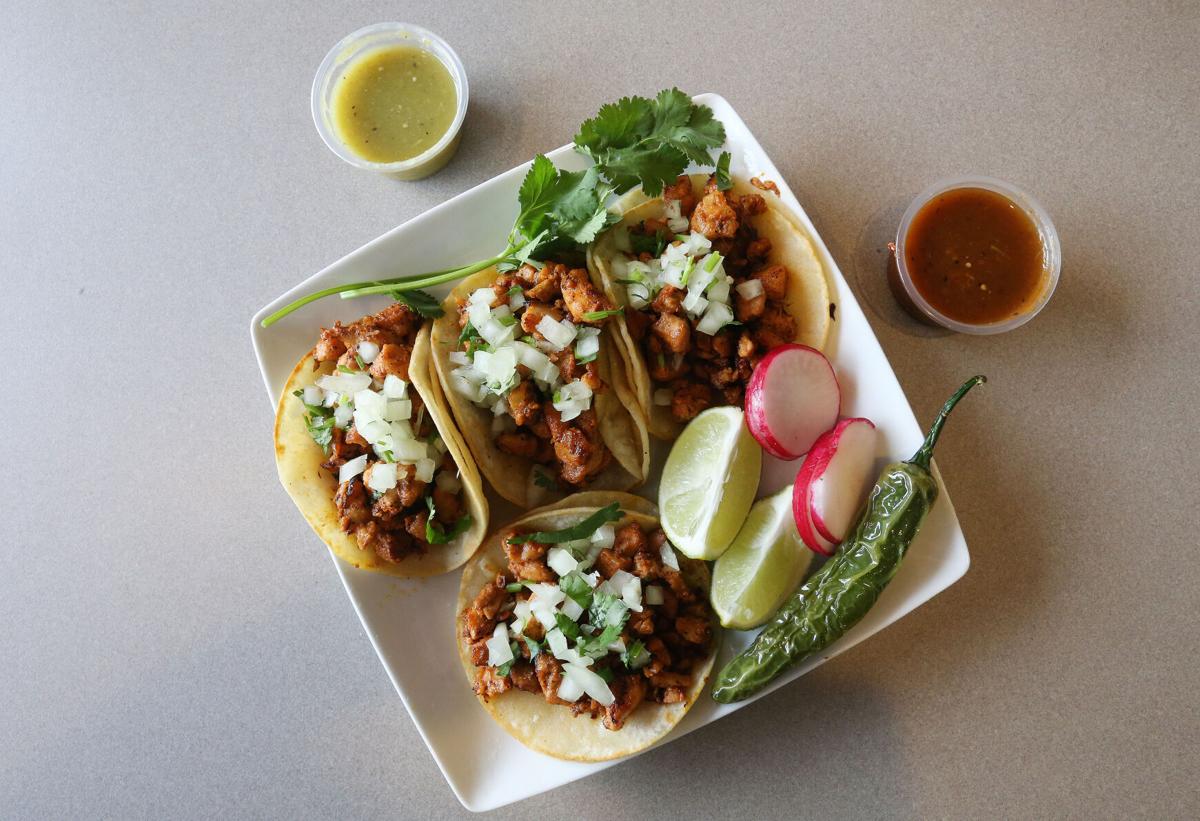 Tacos at Guapo's Taco Shop are available with a variety of meats or meat substitutes, all topped with onions and cilantro and served with salsa.

It's taco time at Guapo's Taco Shop, which offers a variety of proteins and meat alternatives.

The shrimp bowl at Guapo's Taco Shop comes with with rice, beans, pico de gallo, vegan shredded cheese and salsa on the side.

Festive murals set the scene at Guapo's Taco Shop with Jarritos and an order of nachos in the foreground.

Tacos at Guapo's Taco Shop are available with a variety of meats or meat substitutes, all topped with onions and cilantro and served with salsa.

As the years unfold, I think we’re going to see a lot more restaurants like Guapo’s Taco Shop.

Readers told me about this place because though it’s a humble taco shop with minimal seating indoors and out, they do some amazing vegetarian Mexican food in addition to the usual suspects in the meat department. In other words, they try to keep everyone happy and don’t just roll out some lame vegetarian options that are tasteless and show no creative verve.

This is a tiny place on White Lane just east of Highway 99, nestled near its sister restaurant, Shake ‘N Buns, and Denny’s on the south side of the street. It’s worth seeking out.

I was originally drawn to this place by the chicken bowl ($7.50) because it is simple, but oh so good: rice, whole pinto beans, jack cheese, pico de gallo salsa and chunks of grilled chicken. The way they mix it together is what makes it great, the cheese functioning as some sort of creamy binding agent. I remember reading some food critic years ago saying Monterey Jack was the most overrated of cheeses, but with its subtle nuttiness and the way its creaminess can enhance other flavors (kind of like cream cheese), I have grown fond of it, and the kitchen here uses it expertly in the bowls.

You can also get this with carne asada and chicken al pastor or even shrimp for $1 more. For a quick, tasty, somewhat nutritious lunch, this can’t be beat. We ordered the shrimp bowl on another visit, and it’s just as satisfying, the shrimp lightly seasoned and grilled, not fried.

We went back and ordered a feast full of food to get sampled at a family function, mostly because some of the younger relatives are trending toward vegan food and because we wanted a lot of side-by-side sampling to see what people preferred and if they could even tell the difference.

Our order include a Cali burrito with chicken ($9.79), the shrimp bowl mentioned above ($8.50), six chicken al pastor tacos ($2.09 each), nachos with real carne asada ($8.79), a vegan Cali burrito with beef substitute “azada” ($10.75), a vegan quesadilla ($5.75), four tacos with the chicken substitute “al paztor” ($2.50 each) and three vegan tacos with the “azada.” To keep them straight, the kitchen puts the vegan choices in black containers and the meat offerings in white.

It was fascinating. The least desired food from the testing panel was the vegan quesadilla. I always hear from vegetarians that they’ve developed new non-dairy cheeses that are superior in taste. As a native Wisconsinite, I’ve yet to sample one that can compare. That, however, was the only food to be spurned.

The beef substitute, as you can imagine, was good, even though the carne asada here is chopped into the smallest chunks and the beef is oh so good. But I think that with most beef substitutes made with mushrooms, grains and other items that seem to hit the same tastebuds, it’s not unexpected that it would be quite appealing. The thing is I tried them side by side since we had the real beef on the nachos and the fake stuff on the tacos and at the end, I wasn’t sure which I preferred. The fake stuff seemed really good.

And it was the same with the chicken, and as much as I love the regular chicken in the bowls in the future, I’ll get the al pastor. Now I did not see the vertical spit where they roast meat used in al pastor, but it’s possible it could just refer to the spice mix on the outside. I also enjoyed the fries, guacamole and sour cream inside that Cal burrito, which the menu says is their top seller. The tacos all have the standard chopped white onions with cilantro garnish and two tortillas underneath if you want to split them. I’m too impatient for that. The tortillas are soft but lightly grilled before assembly.

The only thing we haven’t tried yet is the street dog ($5.25), a four-ounce beef frank wrapped in bacon and served with grilled red peppers, grilled jalapenos, grilled onions and mayo. Ditch the mayo and you have a winner. There is a video board promoting some secret menu items such as a cheese-encrusted taco that looks like a variation on the vampire tacos I’ve seen so many places.

The ambiance is functional, though I did like the murals on the wall with a Mexican superhero wearing a cape running toward you with a large taco in each hand. Why is this not in the world we live in? The other mural has a Mexican village scene with a taco and a burrito, each with wings and a pepper with buffed-out guns for arms. The grill is to the left as you walk in, right near the cash register where you order. There are two small tables outside, too, almost a requirement with this crazy virus. On our visits I have to say I’ve seen a lot of food going out through delivery services or call-in orders and the place is usually minimally staffed (three people out front most of the time), but they always seem busy.

Guapo’s Taco Shop can be recommended for a fine dining experience.

Atmosphere: One and a half stars