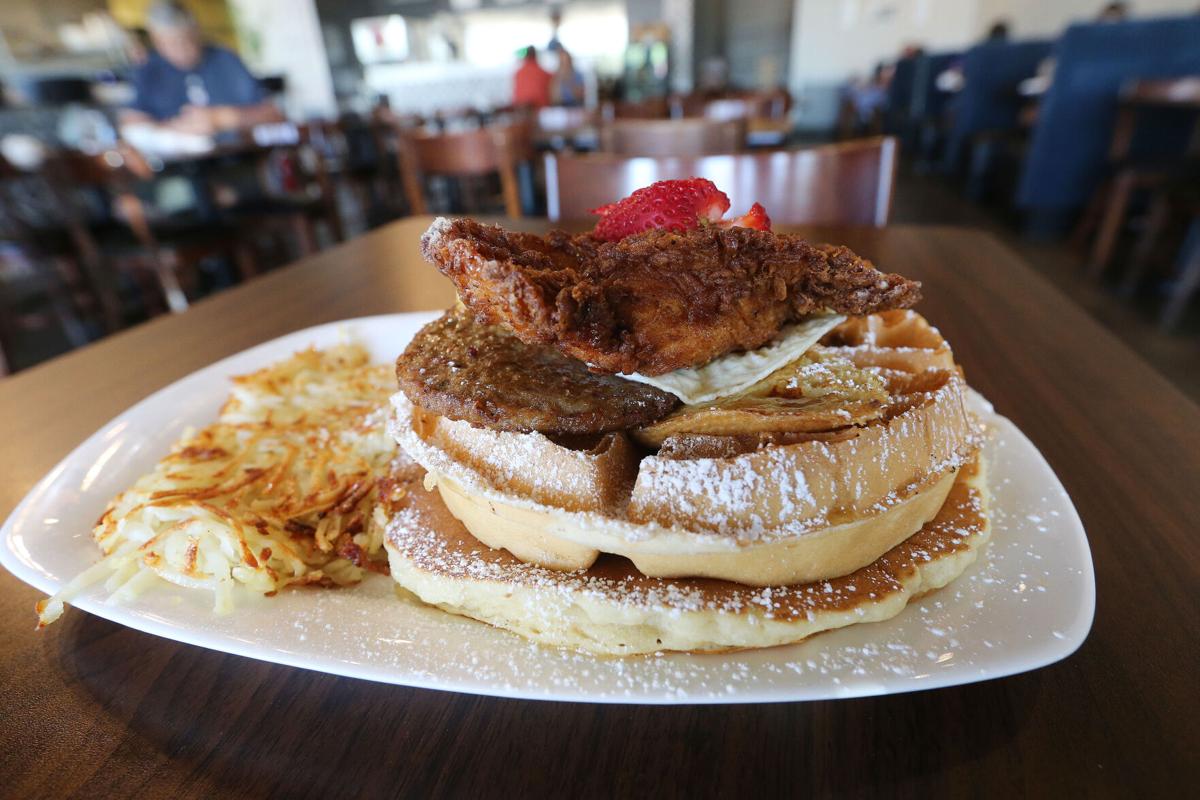 The Hot Daing! at Toasted is a mighty meal with a stack consisting of a giant pancake, crisp Belgian waffle and thick French toast, that is topped with two eggs, sausage and fried chicken and served with a side of potatoes. 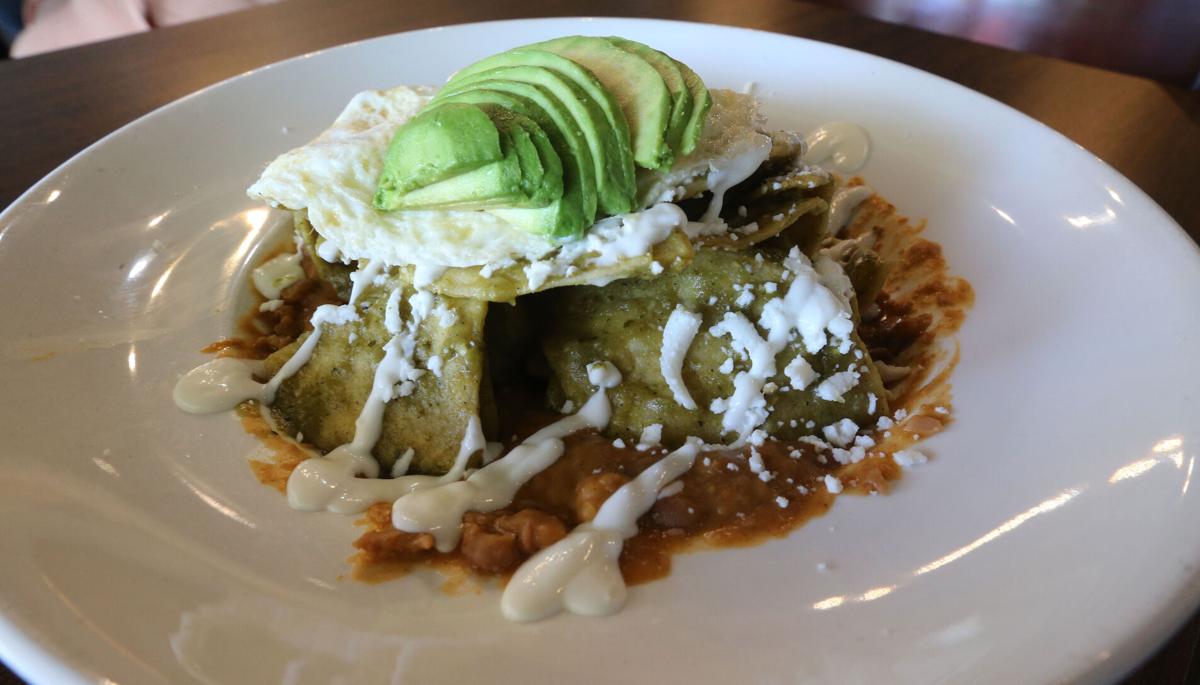 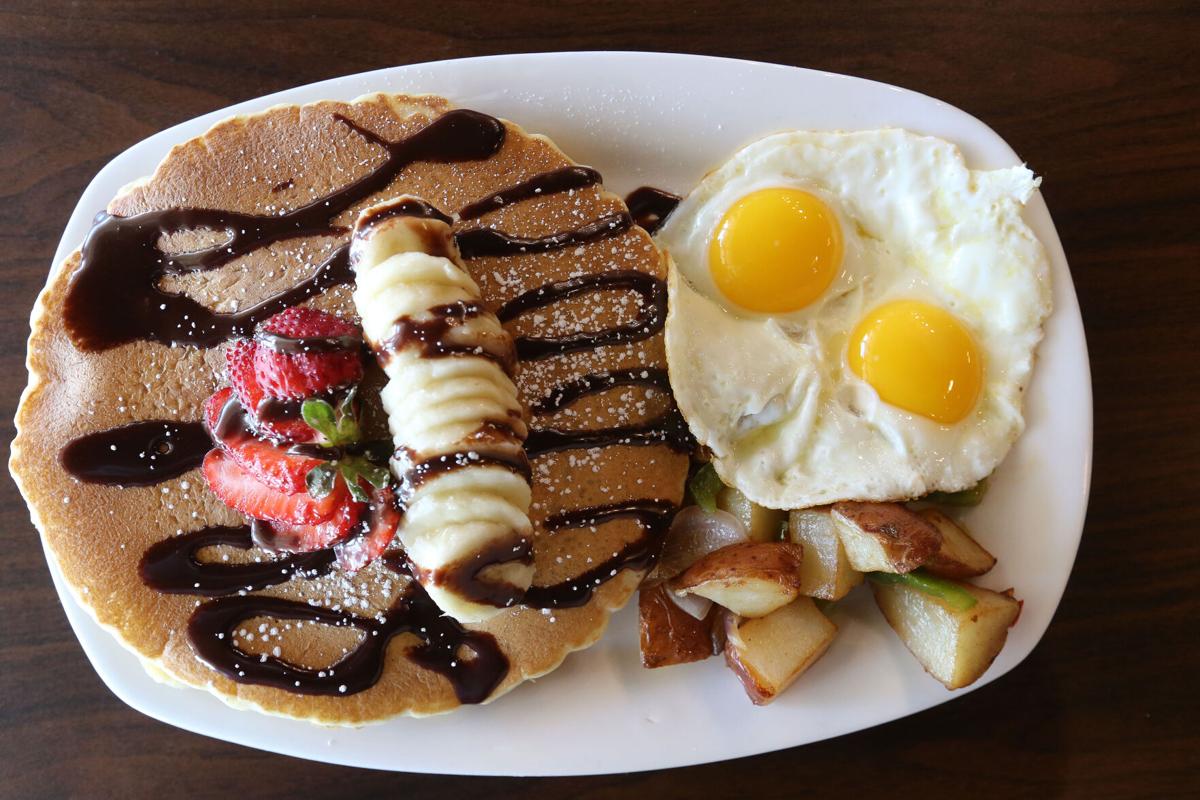 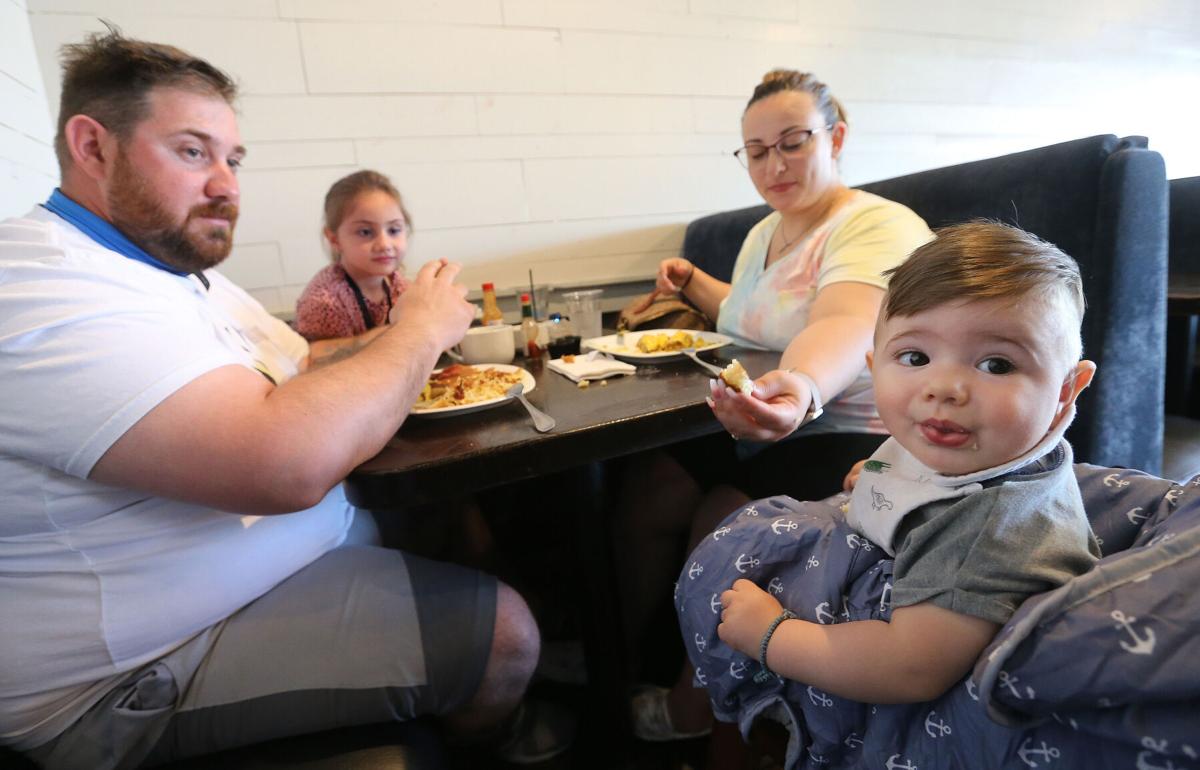 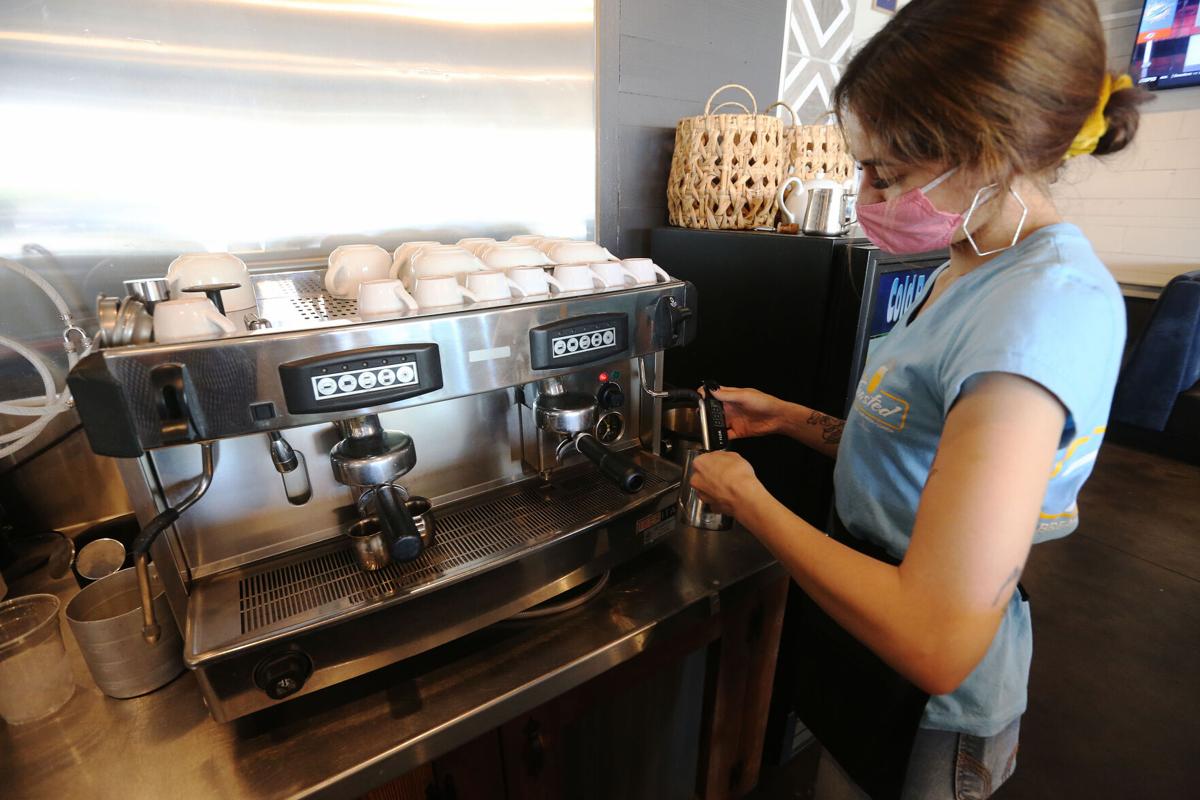 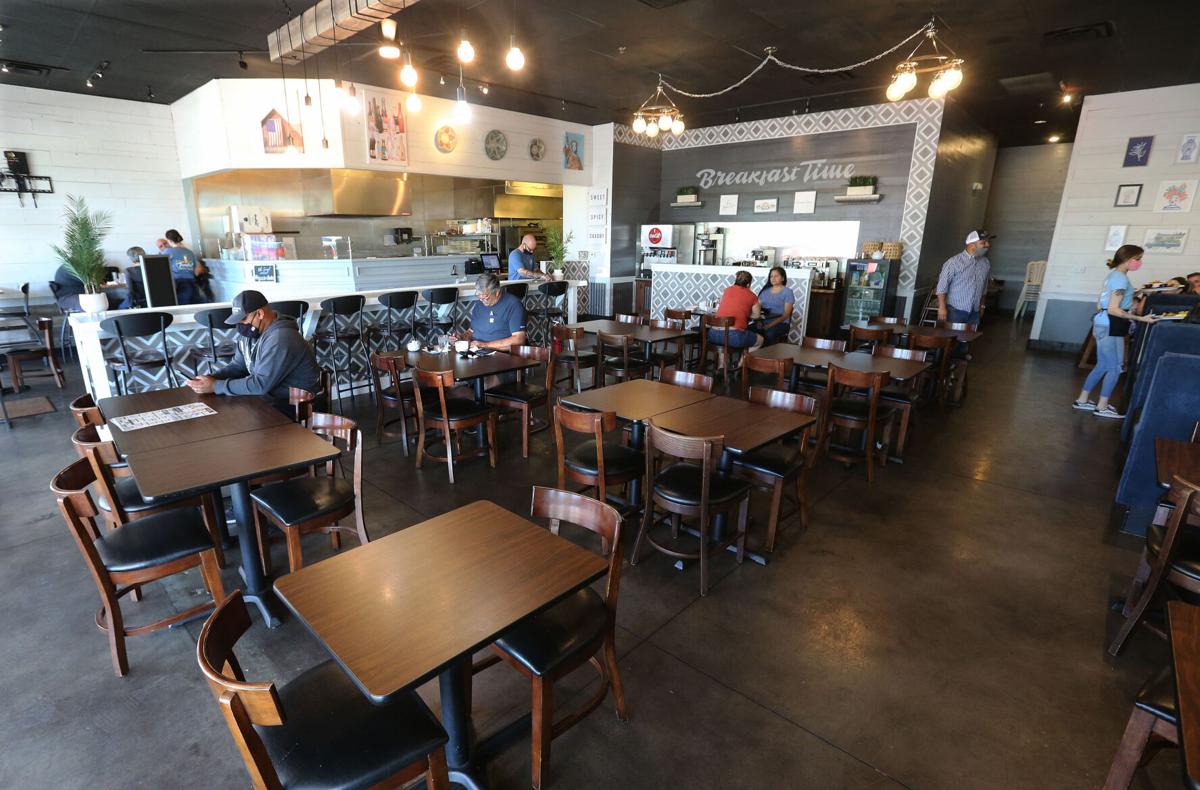 Toasted's bright, airy design is conducive to your weekend (or weekday) brunch plans. 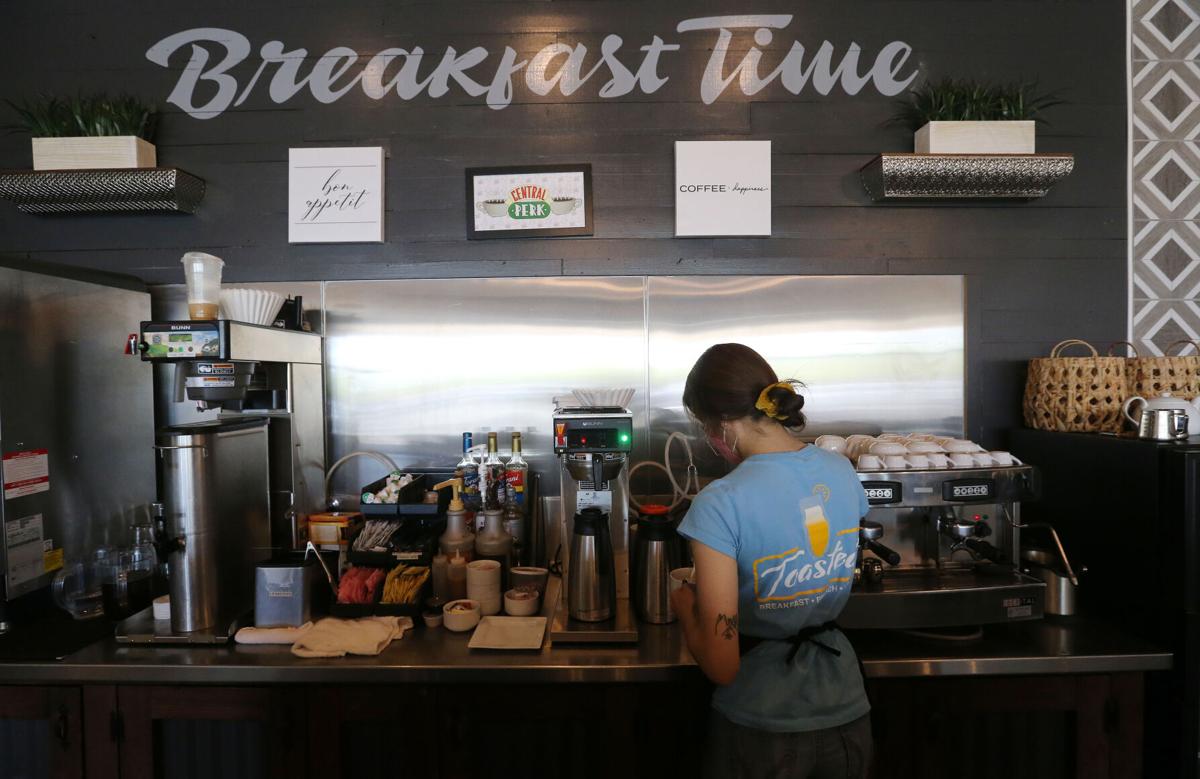 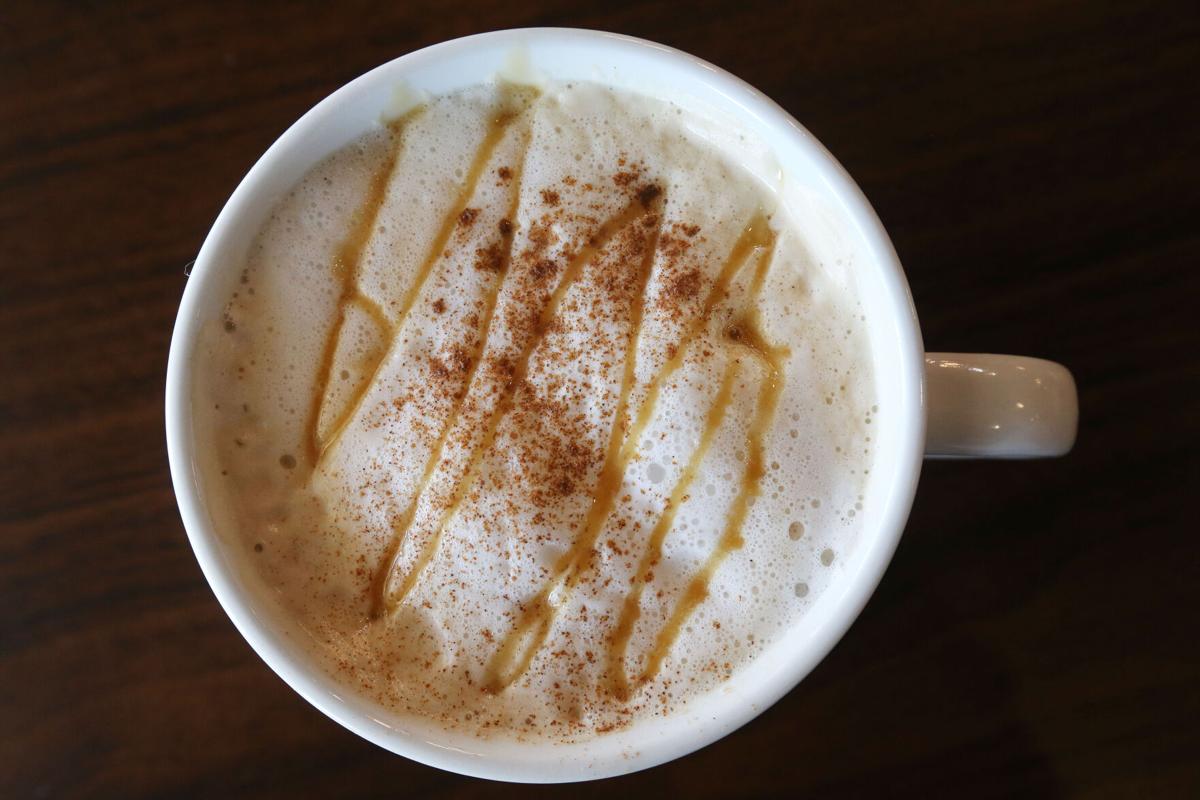 Venture beyond your plain cup at joe at Toasted with caffeinated options like this crème brûlée latte. 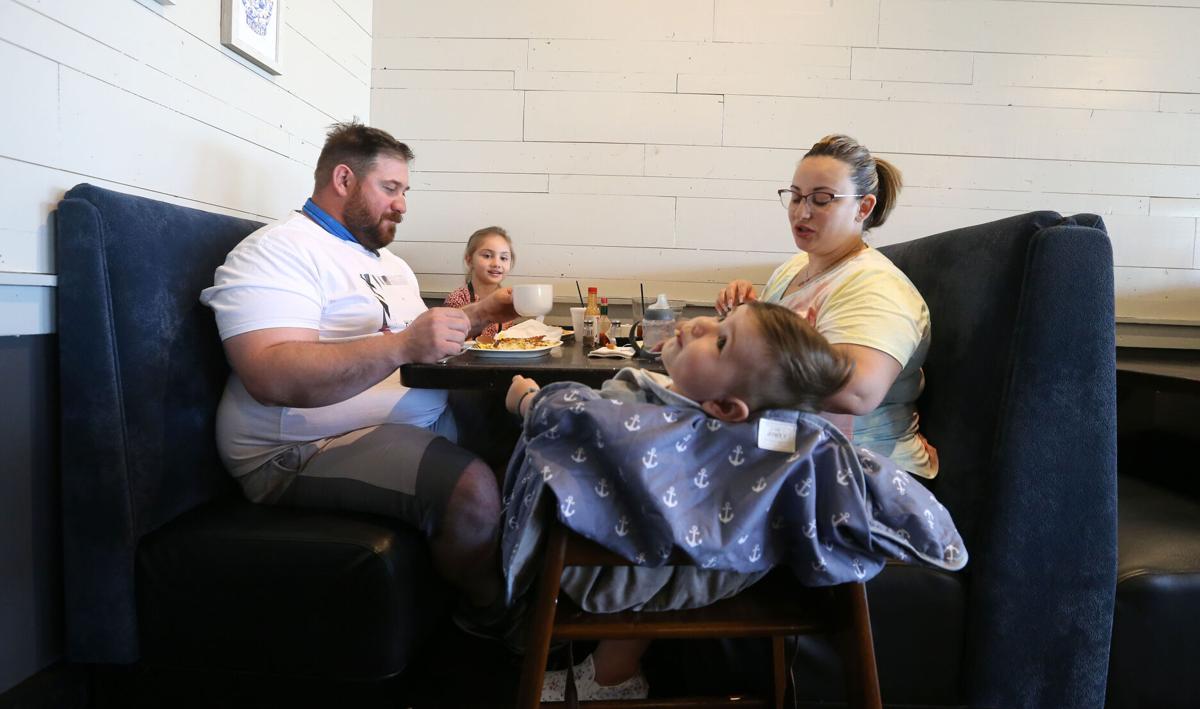 The Hot Daing! at Toasted is a mighty meal with a stack consisting of a giant pancake, crisp Belgian waffle and thick French toast, that is topped with two eggs, sausage and fried chicken and served with a side of potatoes.

Toasted's bright, airy design is conducive to your weekend (or weekday) brunch plans.

Venture beyond your plain cup at joe at Toasted with caffeinated options like this crème brûlée latte.

I’ve been a big fan of both Bootleggers, the original on Oak Street and the offspring that opened in the northwest over a year ago. Now a third restaurant from those owners, quite different, has opened in the southwest and it’s just as solid, although not the same type of place at all.

Toasted on Panama Lane is a breakfast- and lunch-only spot. Like 24th Street Cafe, it tries to compete by offering different types of food that you can’t find just anywhere, with a creative zest that is very welcome for breakfast, lunch or dinner.

If you’ve been to the Bootleggers restaurant, there are some familiar items (such as the Kraken burger) but there are also so many choices that on paper sound so interesting that we were already planning what we’d order on a return visit when our initial meal hadn’t even finished.

There isn’t much of an emphasis on craft beer and fancy cocktails, though I should add the word "yet" as I’m sure a full liquor license is in the works (there are eight craft cocktails on the top of the menu, including a mimosa flight). A sign near the door said you could bring your own champagne and wine, and we did notice a table near us with a bottle, on a Monday morning no less. Hey, when a weekend occurs does vary based on work schedules.

This particular location was last home to Chef Lino’s Grill (probably a victim of COVID-induced rent issues), and before that a Dickey’s Barbecue Pit and Big D’s Smokehouse & Grill. My companion just loved the way they’ve brightened the place up with gray shiplap, white trim, lots of beige and interesting gray tiles near the coffee and beverages station. It’s just a perfect match for the early day dining experience.

The two-page menu features a full page of breakfast choices including skillets, burritos, omelets, five different versions of eggs Benedict as well as pancakes. Lunch options range from burgers and sandwiches to soups, salads and light fare. Way too many choices, but we finally settled on two: My companion selected Mount Chilaquiles ($13.99) while I chose the most exciting item on the menu, Hot Daing! ($13.99) and a crème brûlée latte ($5).

My plate was reminiscent of those giant steak or pizza challenges at some establishments that, if you finish it in one sitting, results in your picture going up on the wall, with other possible rewards including a comped bill and a T-shirt. I’ve never been able to win one of those “Man v. Food” contests, but a guy can dream.

In any case, this platter features a large pancake, a full Belgian waffle, one French bread-sized piece of French toast, a sausage patty, two eggs cooked to order, a freshly breaded and fried chicken breast and a drizzle of maple syrup over the whole thing.

Did I finish it? No, but I did finish parts of it, such as that great chicken breast — thin but so dark and crispy with the thick batter on the outside — and the eggs and sausage. Parts of the rest remained unconsumed as I was not doing lots of yard work that afternoon for which all the carbs would have been handy. Not a reflection of the quality, as everything was so good: The pancake light and fluffy, the waffle crispy and not too dark. There was a large steak knife driven through the whole tower to hold it together before it reached your table. It was quite photogenic.

My companion’s breakfast could’ve been served with asada-chorizo or chile verde for an extra $2.50, but she went for the non-meat version. It was quite respectable, with beans on the bottom, crispy chips, a generous sprinkle of queso fresco and a fan of fresh avocado on top. The sauce choices are roasted tomato (red) or tomatillo/avocado (green); she chose the latter and there was more than enough to keep it all covered. Another healthy portion, I’ll tell you.

I appreciated that the country potatoes she chose were nice red potato chunks fried with strands of both onions and green and red peppers. The hash browns on my plate were dull as dishwater.

What we’ll be getting on future visits: the breakfast totchos ($12.99, with tater tots, house-made sausage gravy, hot link and two eggs), the Karen ($11.99, an omelet with ham, bacon, mushrooms, tomato, spinach and cheese), the Greek toast ($11.99, red pepper hummus, two eggs, avocado, olives, feta cheese and a balsamic drizzle), Release the Kraken ($13.99, a burger we’ve enjoyed at Bootleggers with tater tots, bacon, fried egg and a house-made cheese sauce) and the carnitas pork skillet ($12.99, made special with sauteed veggies).

There are lots of small little details done right here, down to the Sonic-style ice chunks in the drinks.

Service was quite polished from Breegan, without any “new restaurant” glitches that you might expect.

Toasted can be recommended for a fine dining experience.

Amenities: No alcohol service yet; some vegetarian options; takeout-friendly; family-friendly, no delivery yet but Uber Eats and DoorDash will be offered in the future