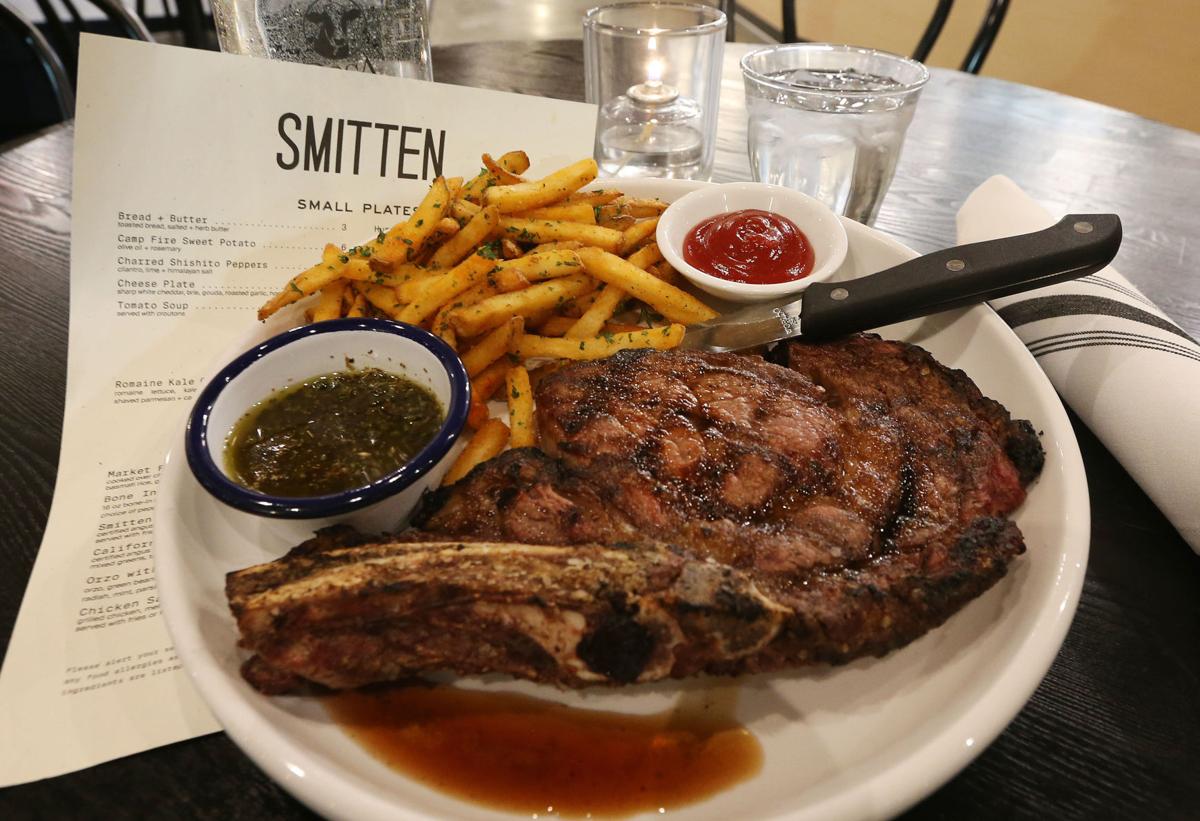 Bring your appetite when ordering the bone-in rib-eye steak at Smitten. 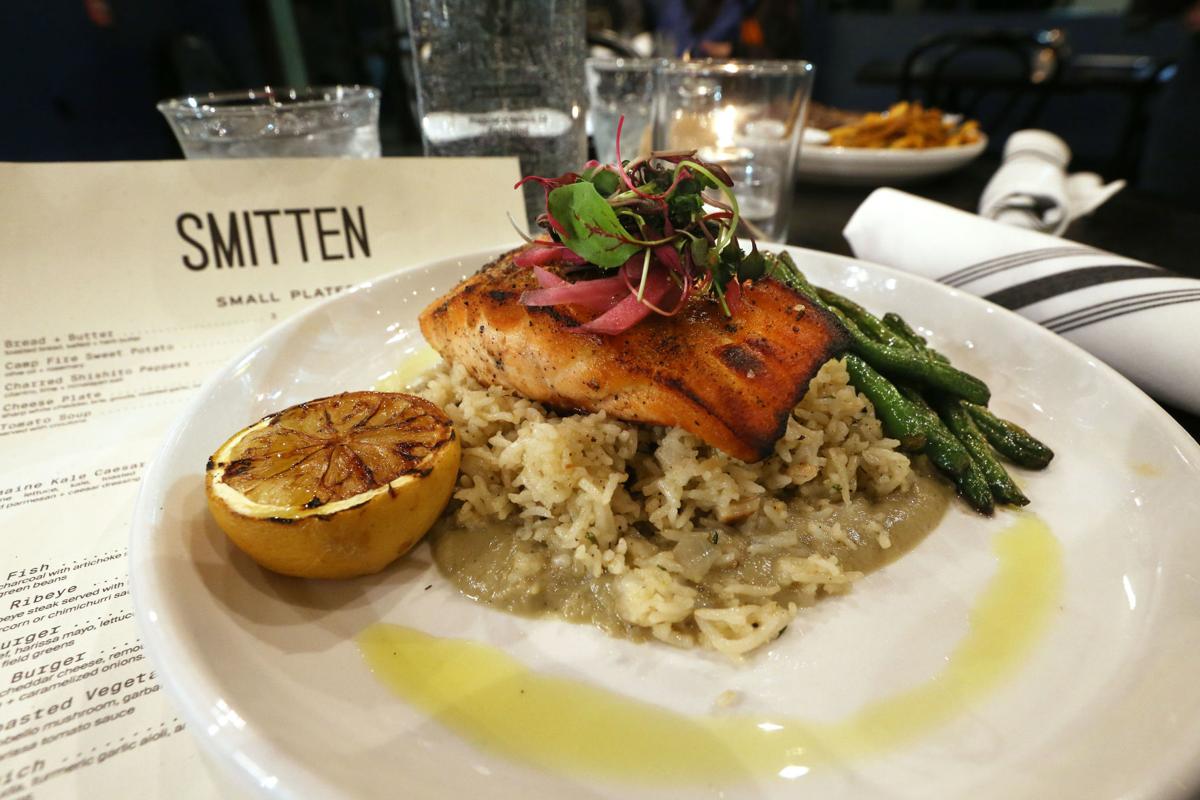 This salmon is market fresh and fabulous at Smitten. The fish is cooked over charcoal then topped with micro greens and pickled onions, served over basmati rice with green beans. 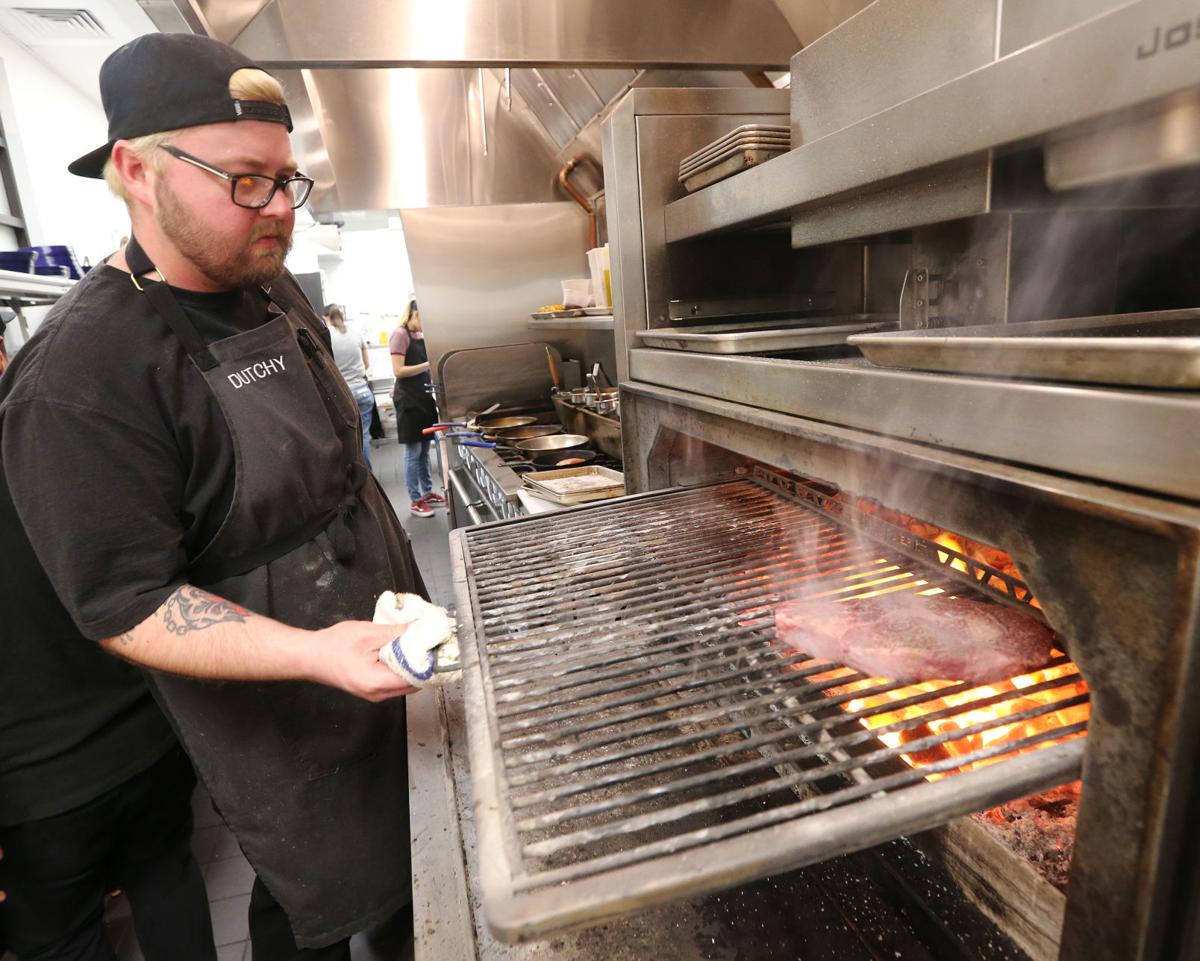 Chef Dustin Lovell places a rib-eye on the grill at Smitten. 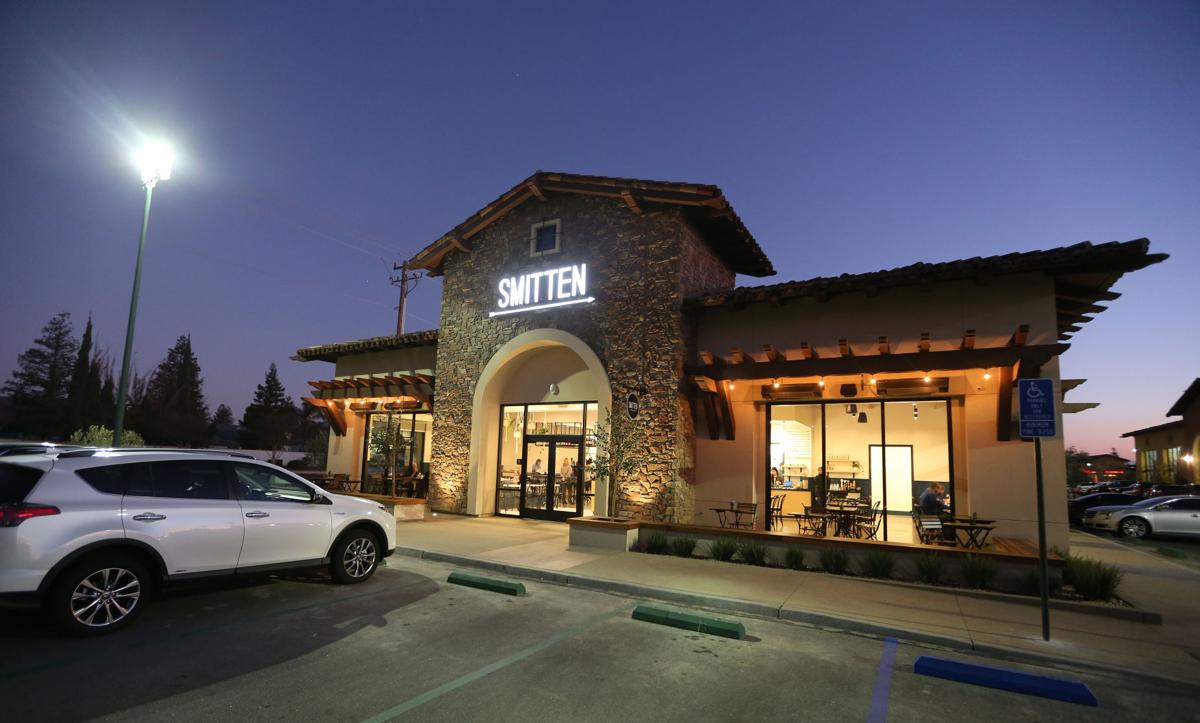 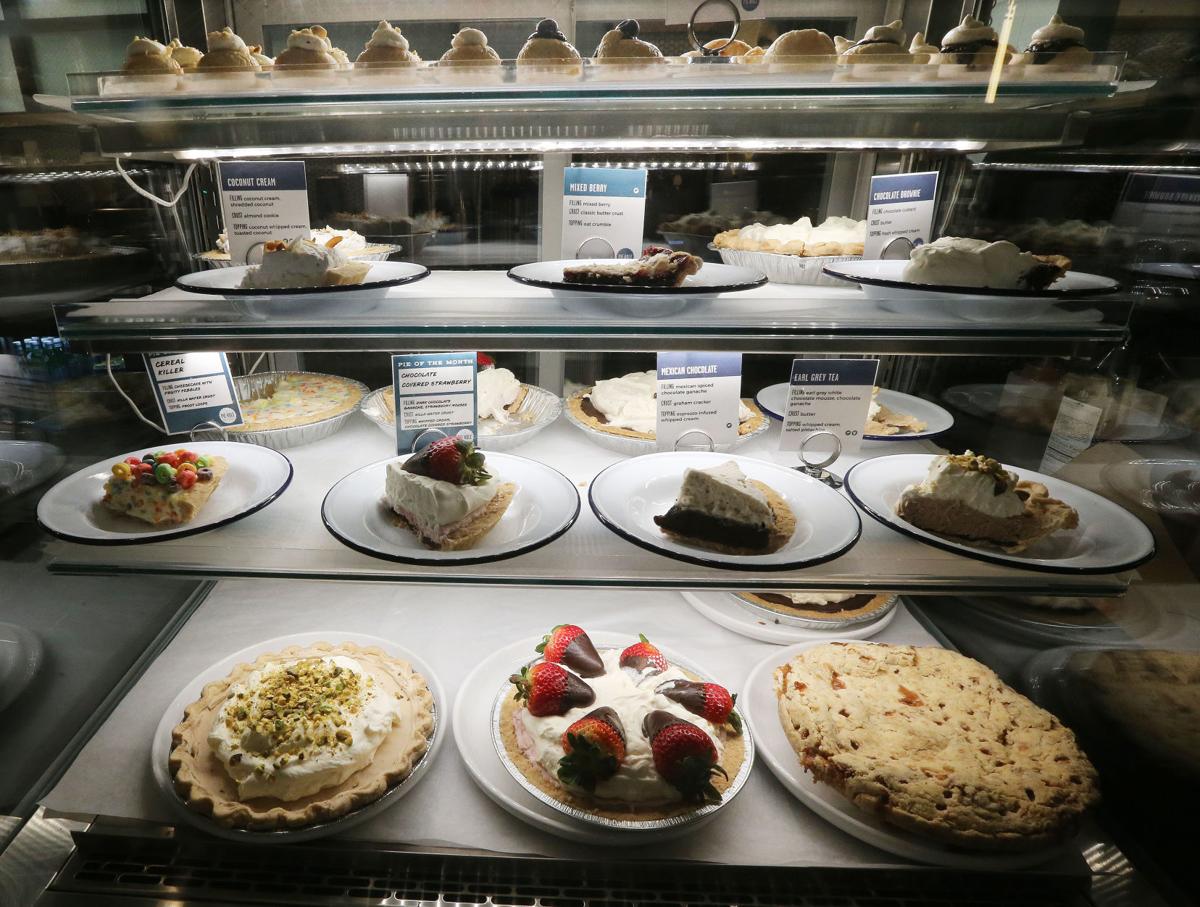 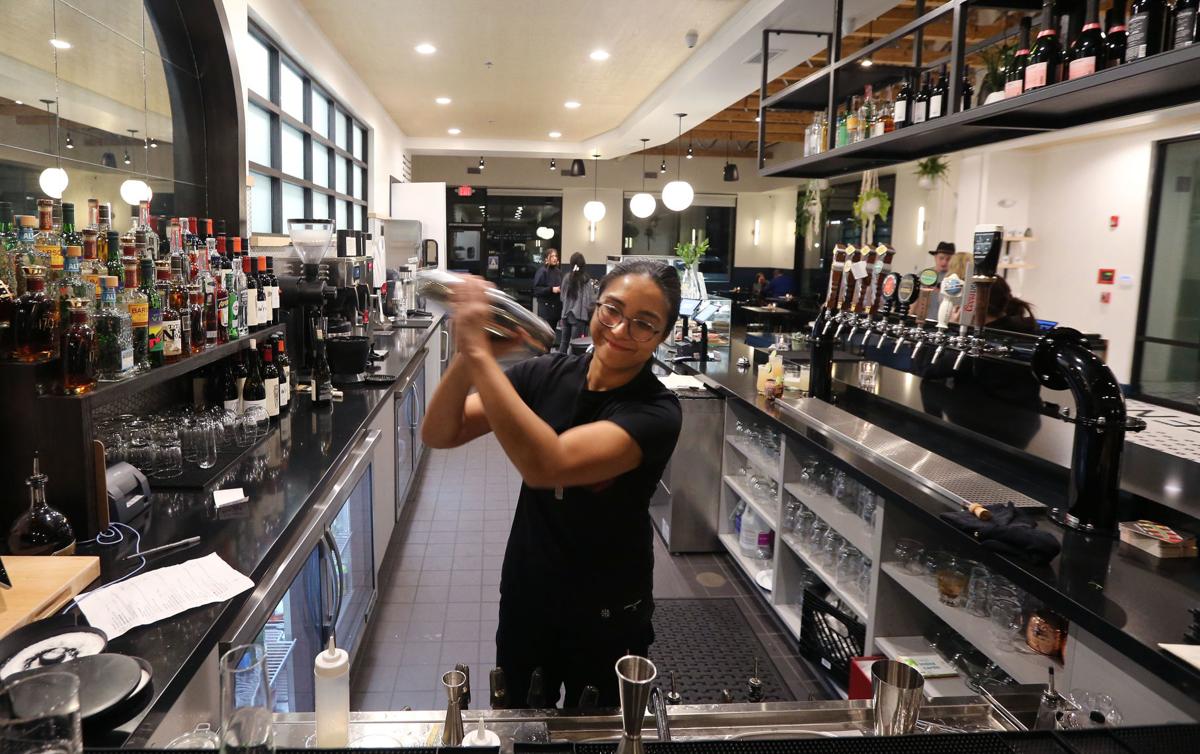 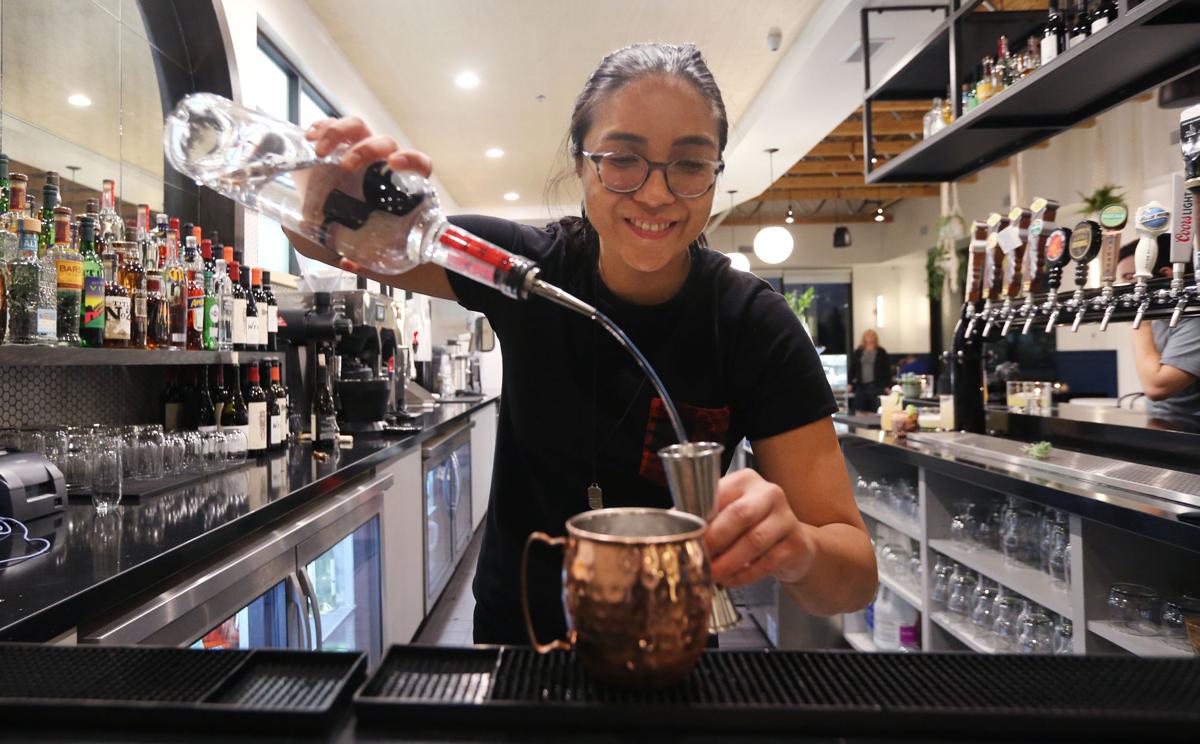 Bartender Roschel Velasco makes a Moscow mule at Smitten. The popular drink is part of the restaurant's new cocktail menu. 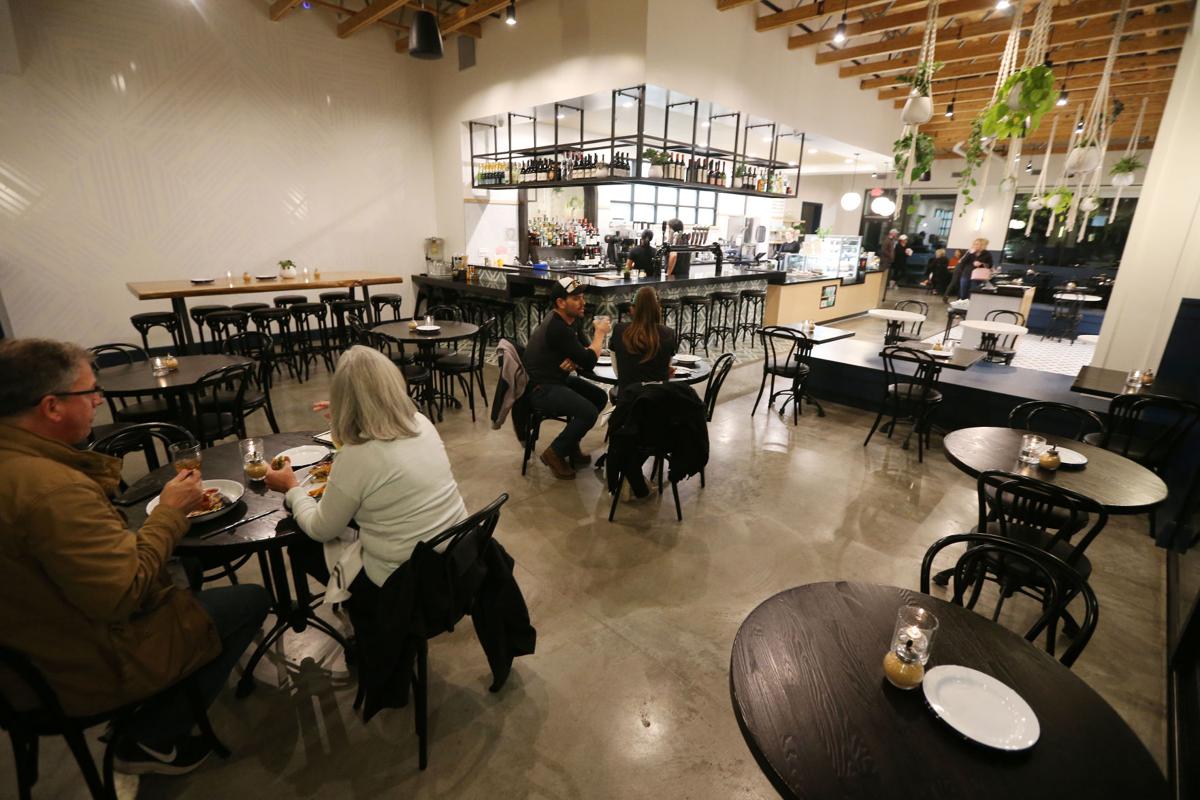 The dining area is spacious at Smitten in Grand Island Village.

Bring your appetite when ordering the bone-in rib-eye steak at Smitten.

This salmon is market fresh and fabulous at Smitten. The fish is cooked over charcoal then topped with micro greens and pickled onions, served over basmati rice with green beans.

Chef Dustin Lovell places a rib-eye on the grill at Smitten.

Bartender Roschel Velasco makes a Moscow mule at Smitten. The popular drink is part of the restaurant's new cocktail menu.

The dining area is spacious at Smitten in Grand Island Village.

If you create a list of restaurants that have significantly influenced our dining scene over the past five or so years, you have to start at Cafe Smitten. They have been innovative mostly for bringing some of the best trends of Los Angeles dining to Bakersfield, upping the ante you might say, as well as inspiring the growing Eastchester area dining scene (Dot X Ott and Angry Barnyard moved in across the street and offered the same high quality at reasonable prices).

With an upscale ambiance without being snooty, tasteful food and decor, a casual vibe that would thrive on the Westside of L.A., it evolved as time went on to include the best chicken fingers ever as well as importing desserts like the pastries from L.A.-based chain The Pie Hole.

Late in 2019, just a couple of years after debuting, they’ve opened in the southwest near Wiki Wine Dive & Grill a place that is a more complete dinner house. The innovation continues largely with an amazing Josper charcoal oven, which comes from Spain, continuing what they did downtown in buying quality equipment (a La Marzocco espresso machine from Italy) that positively influences the quality of the kitchen’s offerings. Owners Stasie and Shai Bitton came across the oven in L.A., and a check of the manufacturer’s website shows it can reach temperatures of 900 degrees and is treasured by chefs because it can grill and roast while retaining moisture, especially with barbecued fish and steaks.

When we visited at dinner we were just a bit thrown by both the décor and the compact menu, especially in comparison to the other big dog place that opened in the neighborhood recently: Yard House. Yard House is boisterous and has enough pages in its menu for a novella.

Smitten at night has eight small plates, three salads and nine “mains,” which includes two burgers (one meatless), a chicken sandwich, a couple of steaks, lamb and fish. Though the decibel level for conversation reaches medium (not on a par with Firestone Grill or Uricchio’s, but if busy challenging for conversations), there were no TVs visible to distract you. My companion was again wowed by the decorating choices, the use of a shade of blue that she’s taken to calling Smitten Blue and the '70s throwback macramé plant hangers near the door — a collaboration of Roots Co. and Cactusamongus —that are a terrific accent on the open beamed ceilings. Yes, the place could fly as a date spot, particularly for foodies. The small hexagon tiles near the entrance, some spelling out the restaurant’s name and the interesting variety of lighting throughout (it’s not a dark place, but not too bright either) added to the tasteful impression.

On our visit I ordered the bone-in rib-eye steak ($38) after previously reading it was a favorite of owner Stasie, while my companion selected the market fish ($28), which on this particular night was salmon. Both were fabulous.

There were grill marks on the steak, and it was exceptionally juicy and came with a choice of peppercorn or chimichurri sauce. I’ve had the chimichurri before and enjoyed it so I went with the other and it was so good you wished they served bread with the meal to sop it up after you finished the beef and the fries.

There’s an alluring smokiness we noticed in both the salmon and the beef that made us think, took us aback a bit, as if resetting our expectations. I vowed to come back again to try the Smitten burger ($15), the grilled shrimp with their famous Moroccan sauce ($14) and the grilled chicken/gouda sandwich ($15) with a turmeric garlic aioli. I wondered how the orzo with roasted vegetables ($15), a vegan choice, would taste coming out of that oven.

(At this point in the review I have to tell you my neighbor Lawrence stumbled into the place with his wife, Penny, for dinner late last year when they were actually open only during the day and were trying to finalize things. The owners let him stay and he sampled practically everything on the menu as they were trying to “get it right,” he said. He said it was one of the best dining experiences he’s ever had.)

My companion’s salmon was as perfect as the steak, with a rub on top that seemed Middle Eastern complete with sesame seeds, and all the food below it, as my companion described it, was an amazingly compatible companion: green beans, basmati rice, micro greens, an artichoke spread, grilled lemon half on the side, drizzled oil surrounding it. It looked good enough to have graced the cover of a cooking magazine and tasted just as spectacular.

Of course we had to have some of the Mexican chocolate pie ($6.75), which has the perfect level of cinnamon to compliment the dark, thick texture. I felt lucky there was any left from the day, and even though I love The Pie Hole’s apple pie, this is always first on my list with the thick whipped cream topping and the dense graham cracker crumb crust. The Earl Grey tea pie is great, too, but I can’t get past those two on most visits.

Service on a weekday night that was only moderately busy was very professional from a cheerful, dark-haired young man who looked and acted like he loves his job. I’ll bet they feed him before his shift starts. The beer and wine list is as spare as the food menu but there are local craft beers available. A cocktail menu was launched after our visit.

Smitten can be recommended for a fine dining experience.

Editor's Note: This story was updated to correct the highest temperature reached by the Josper oven.

THE DISH: Up with a twist, Smitten introduces cocktail menu

With its dinner service up and running, Smitten just launched its latest addition on Monday: cocktails.