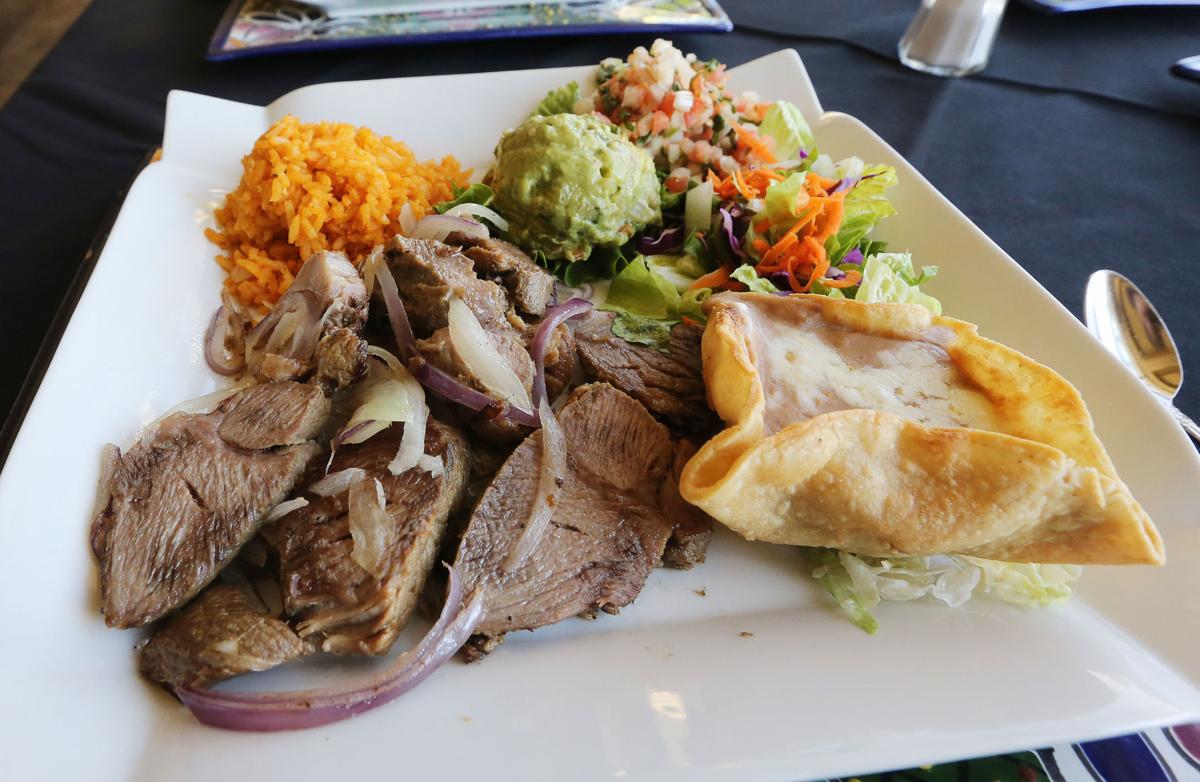 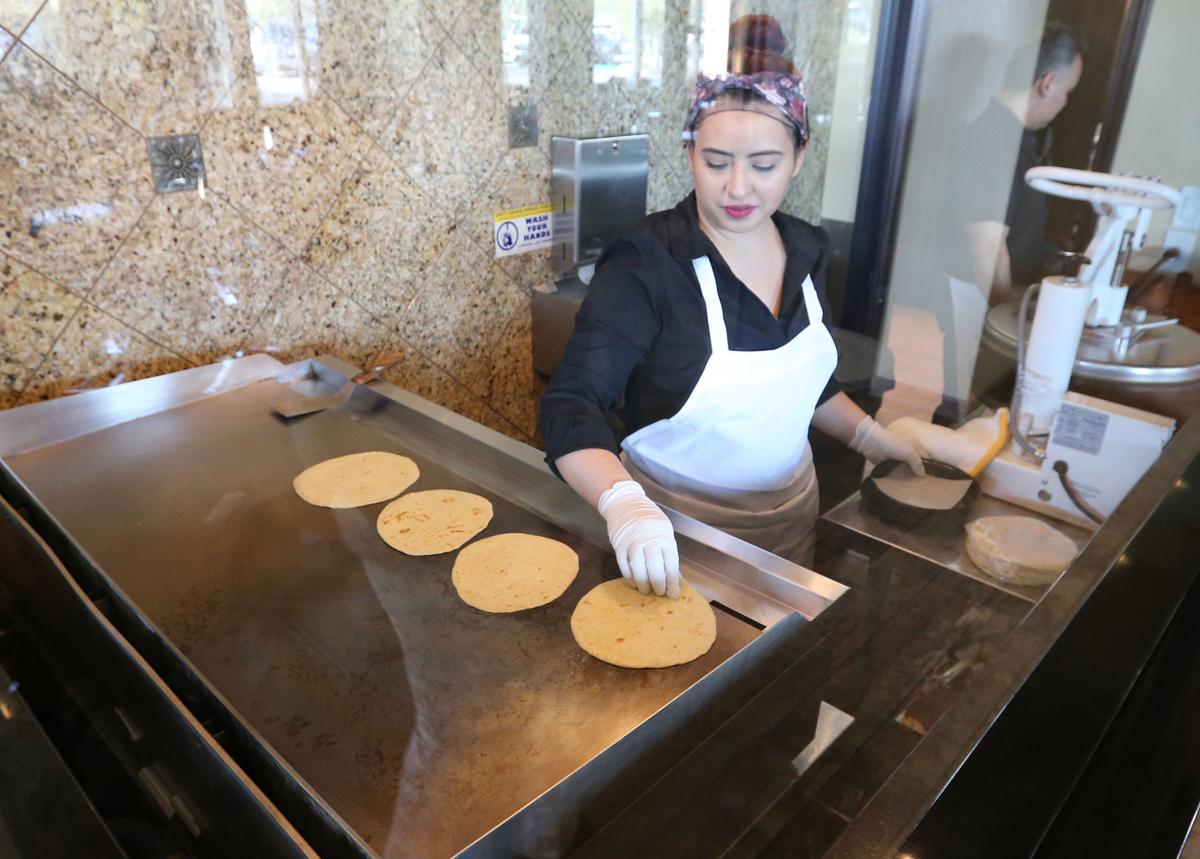 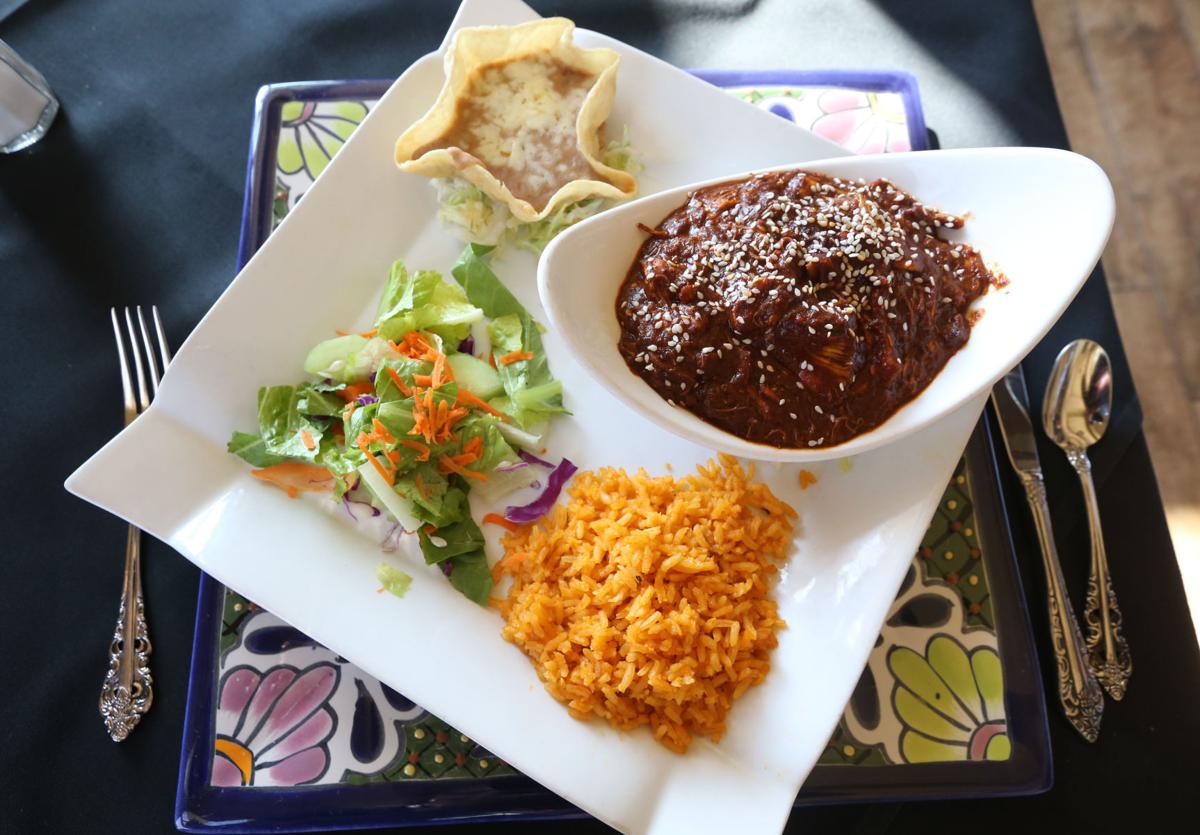 Chicken mole is embedded in a thick rich chocolate-tinged sauce and topped with toasted sesame seeds at Sol Y Luna. 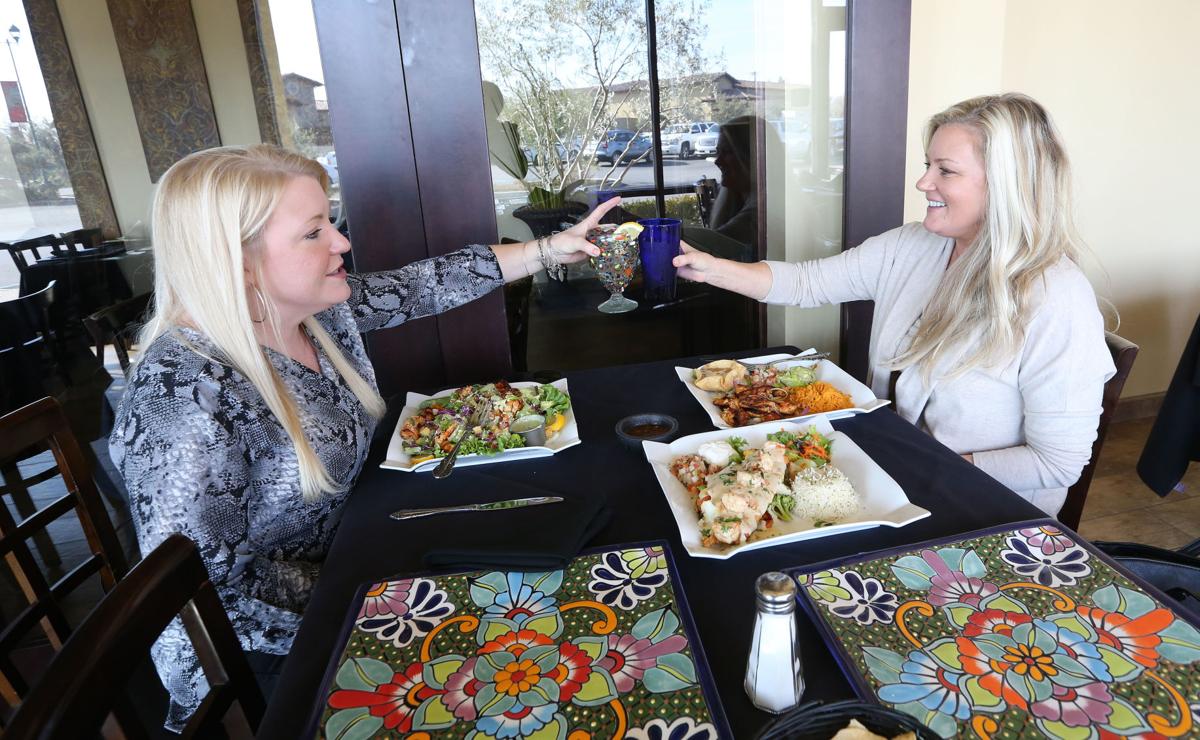 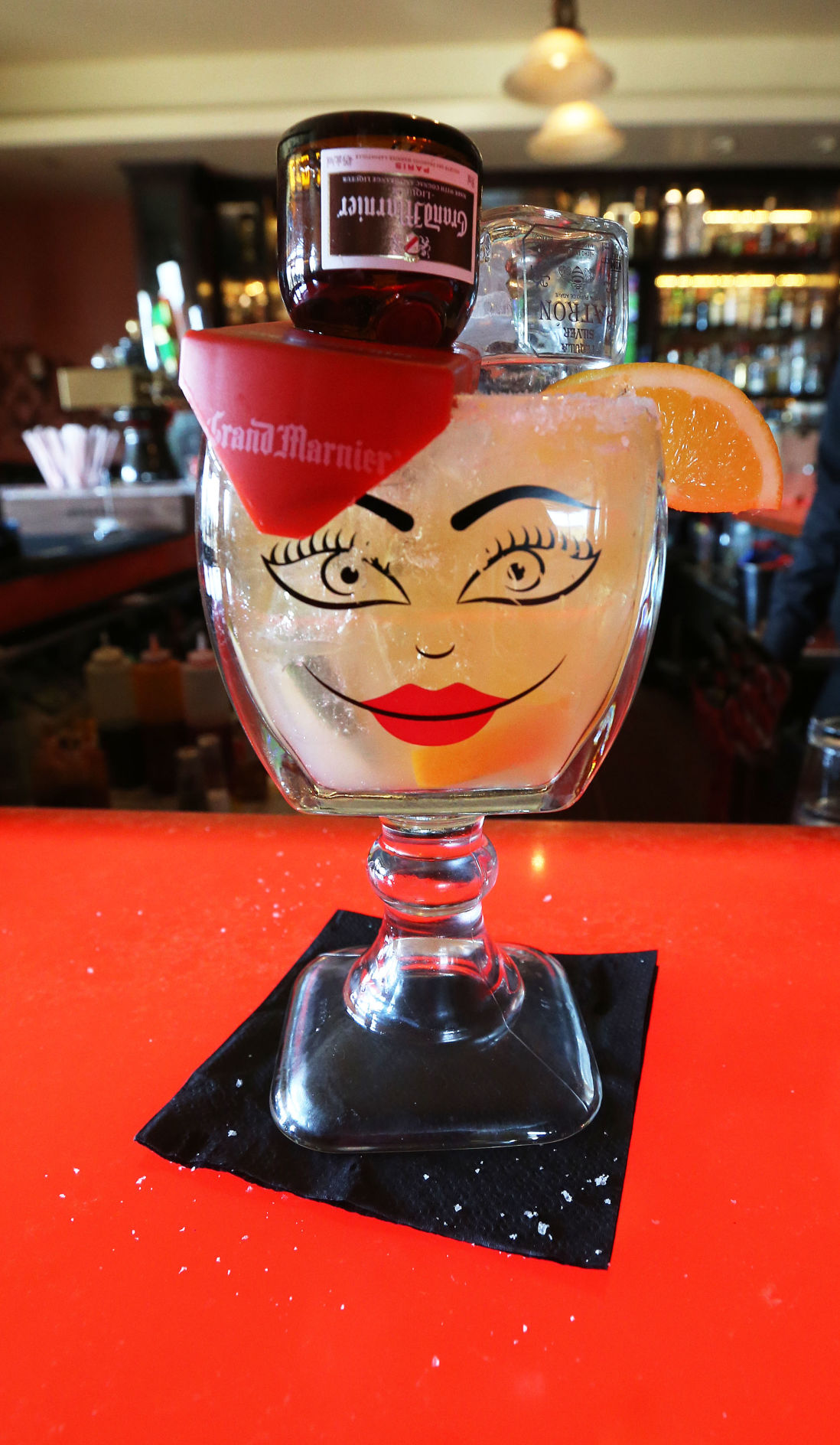 The Margie Cadillac margarita at Sol Y Luna is served with mini bottles of both Grand Marnier and Patron. 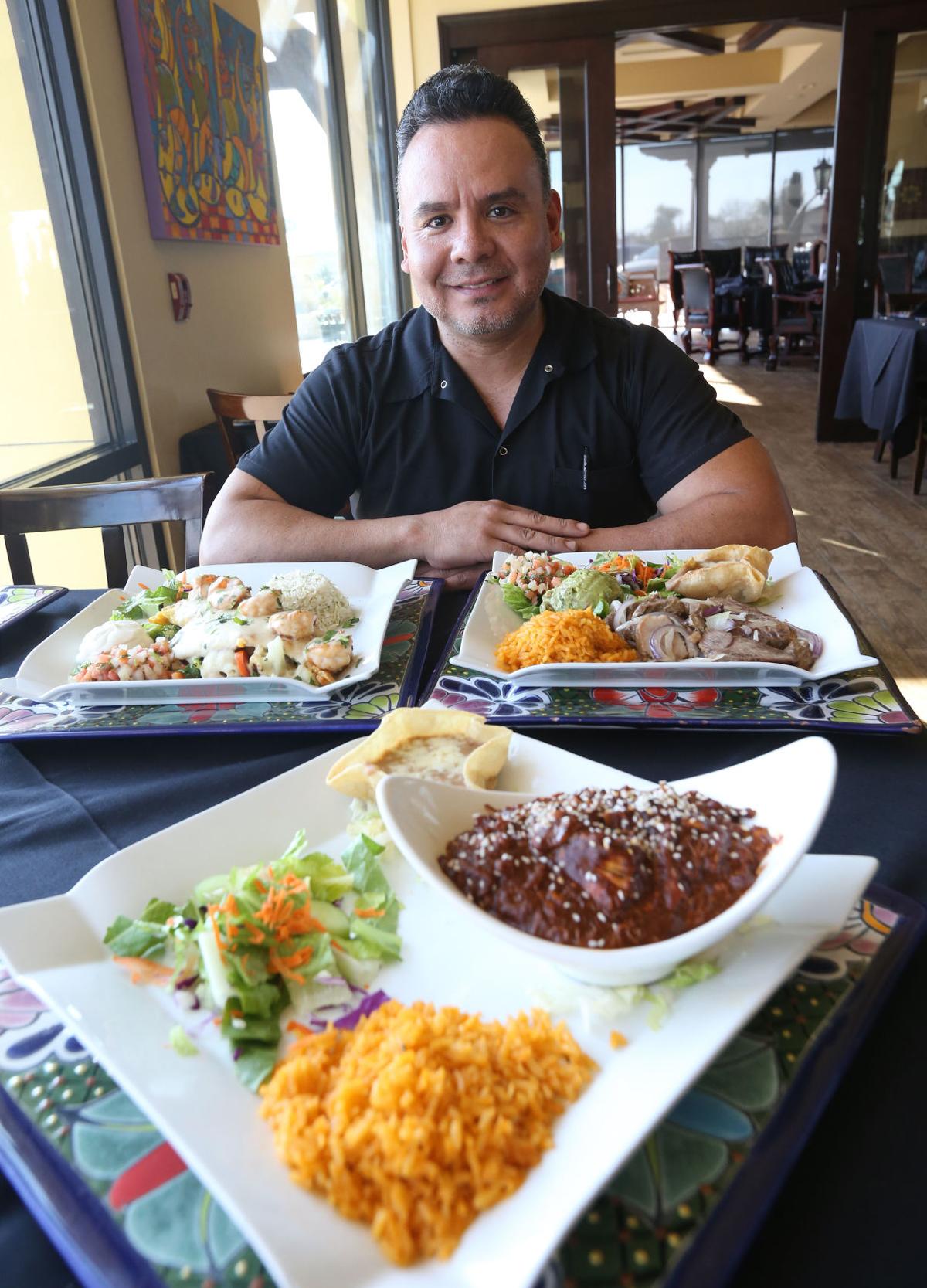 Jesus Briseño is chef and manager at Sol Y Luna. 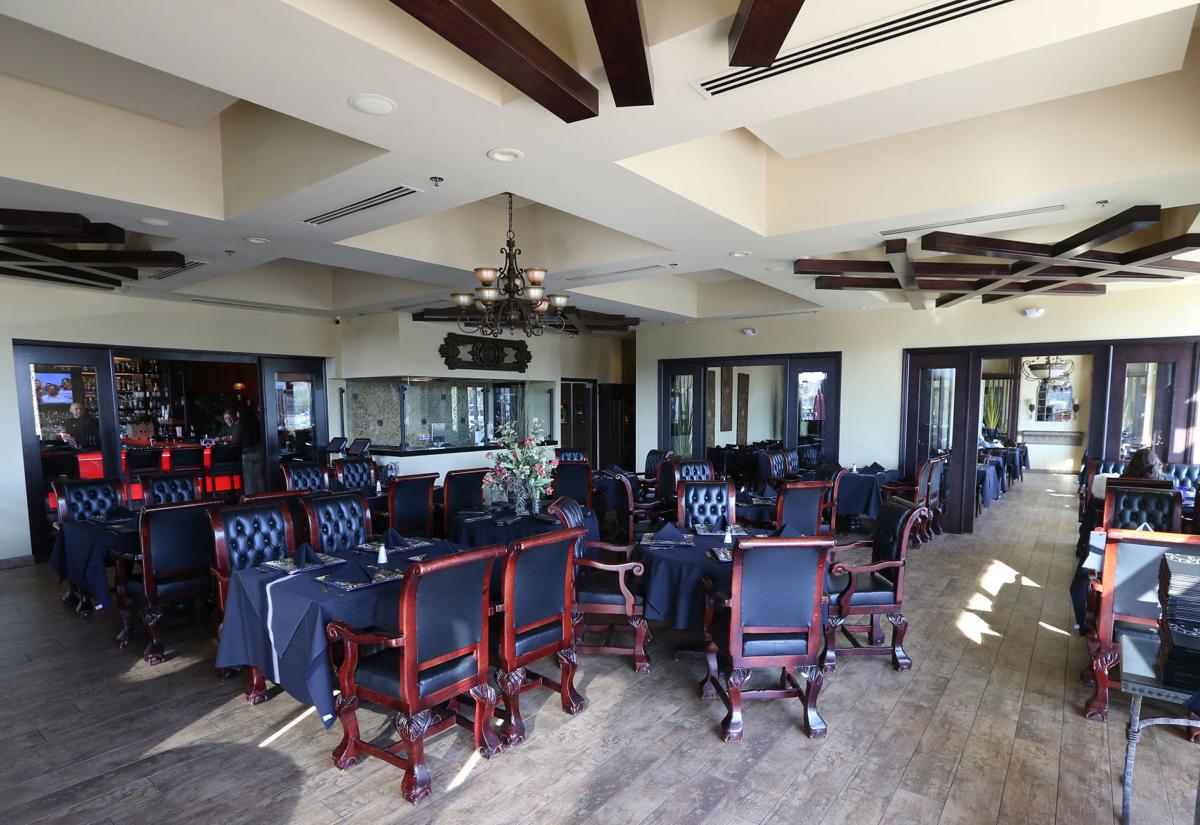 The dining area is spacious at Sol Y Luna. 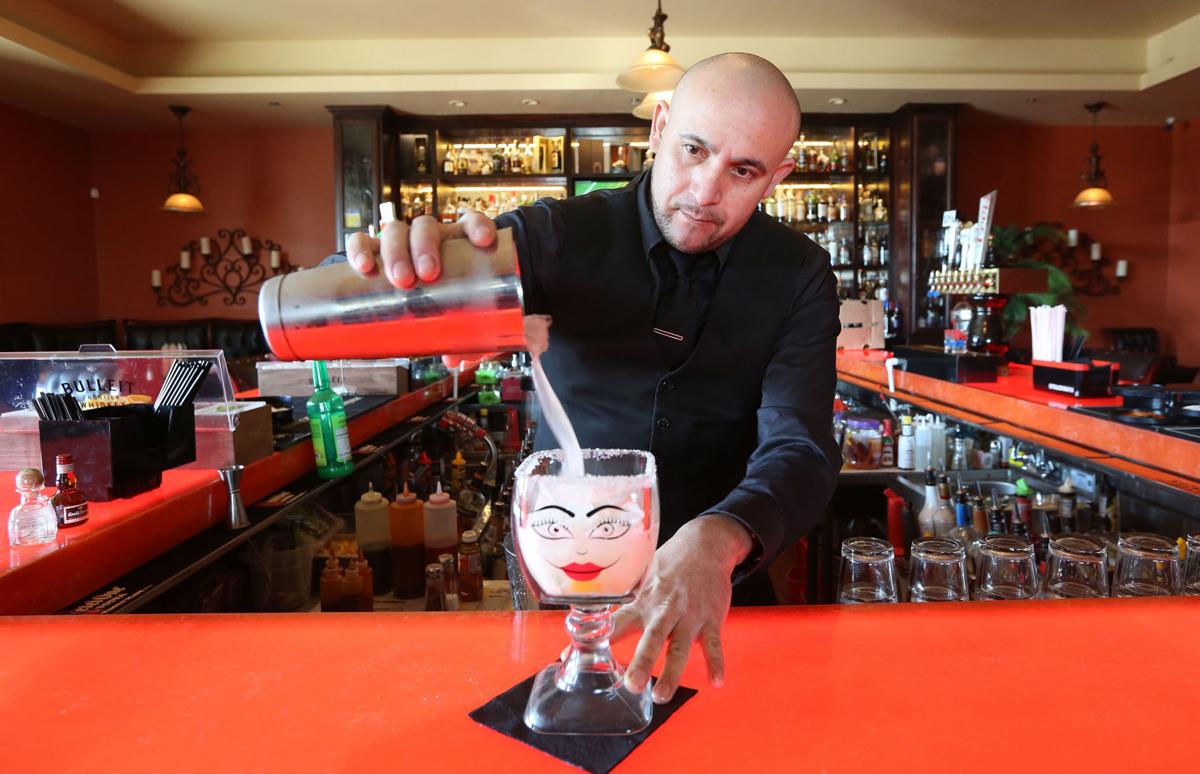 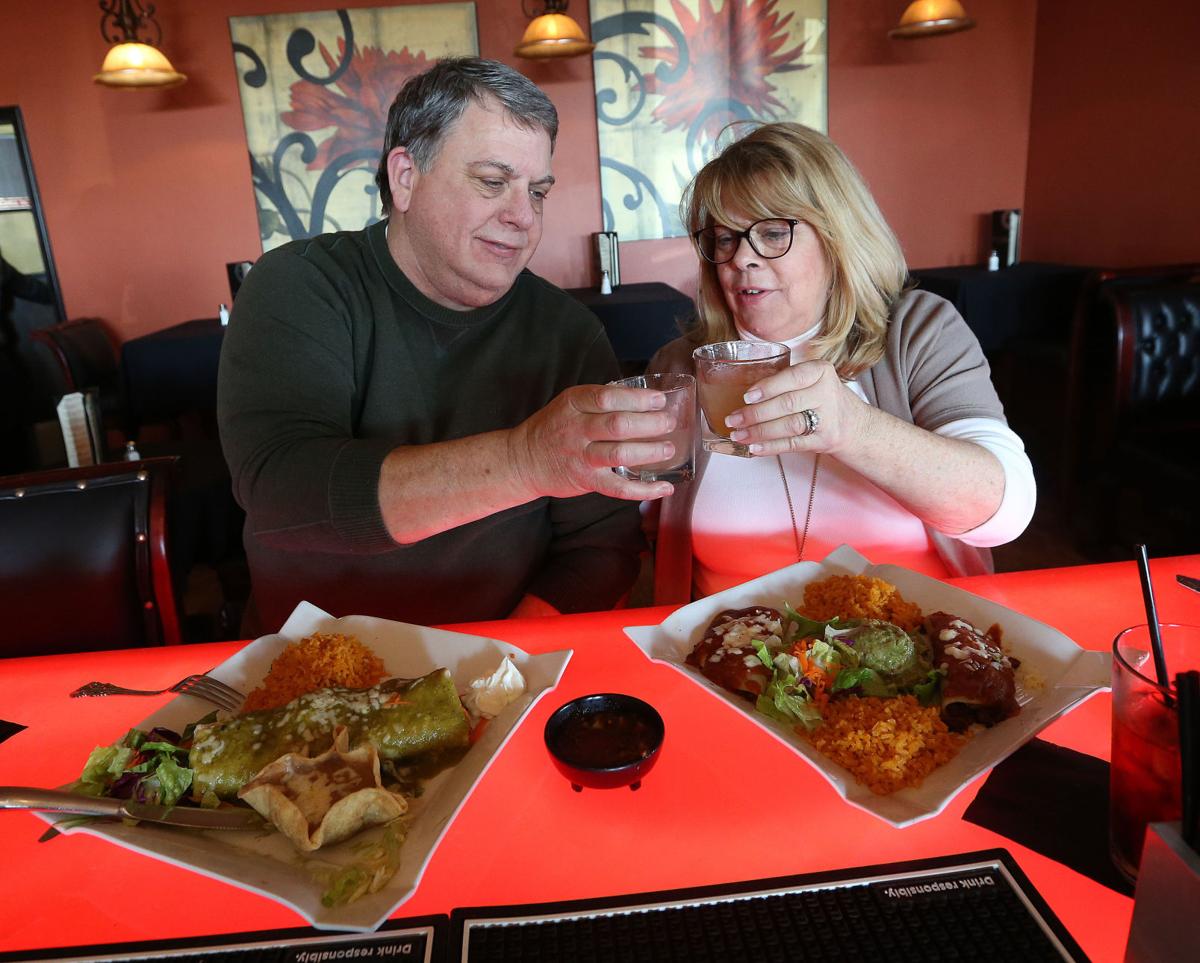 Greg and Maryann McBee enjoy lunch at the bar at Sol Y Luna. 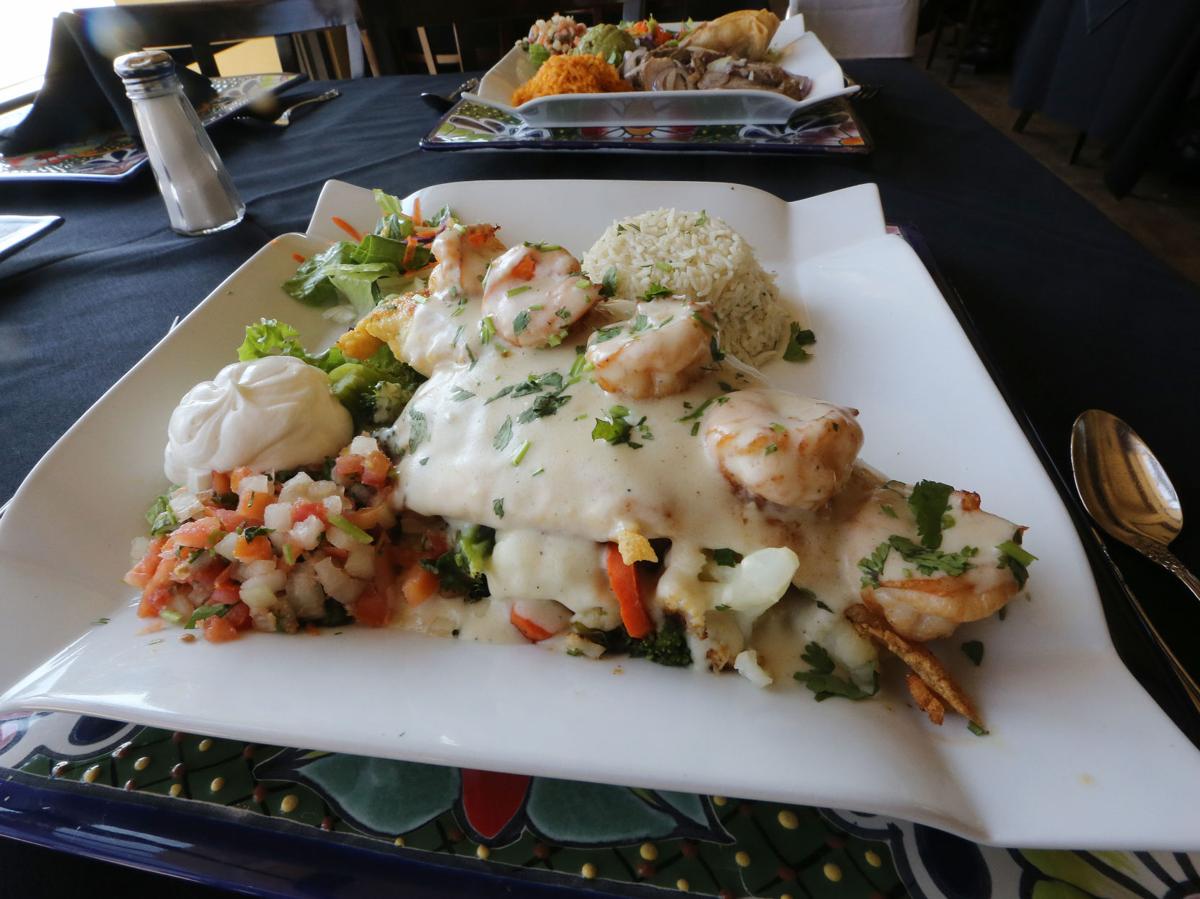 Luna shrimp and fish delight, a sea bass fillet served over a bed of steamed vegetables and topped with large shrimp with special cream sauce is offered at Sol Y Luna. 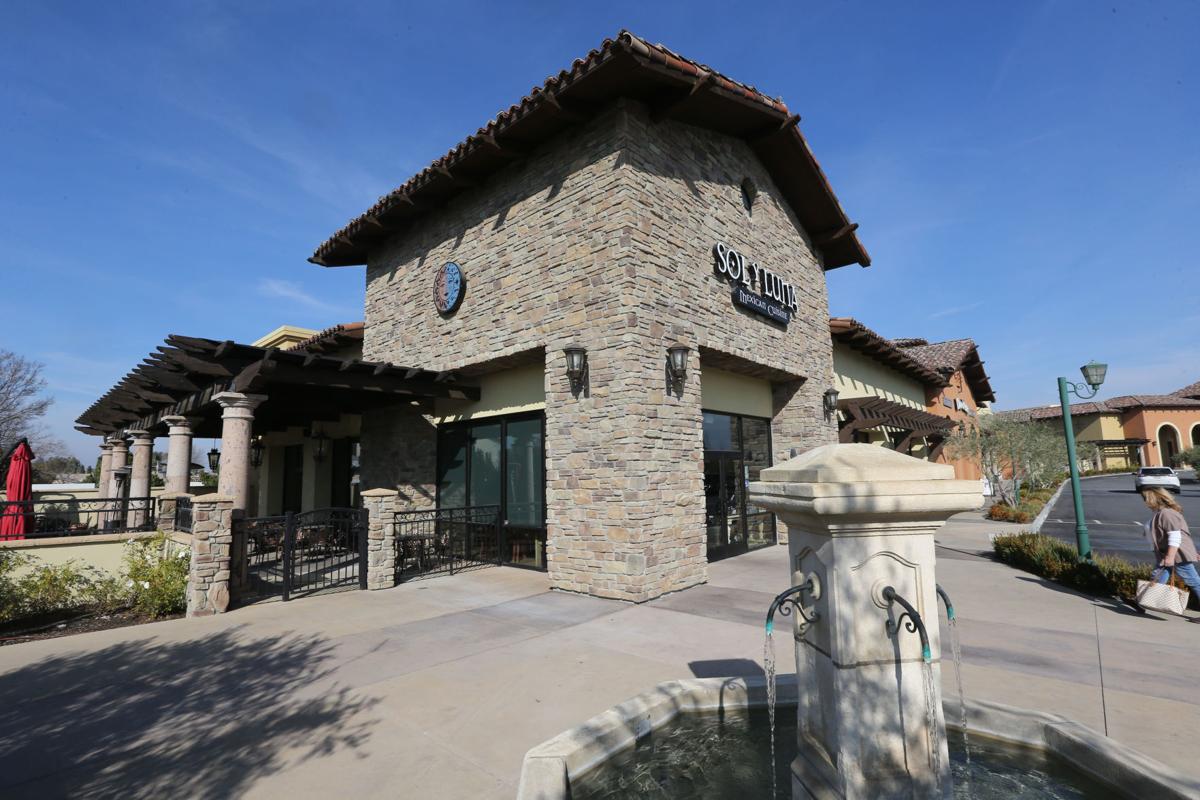 Chicken mole is embedded in a thick rich chocolate-tinged sauce and topped with toasted sesame seeds at Sol Y Luna.

The Margie Cadillac margarita at Sol Y Luna is served with mini bottles of both Grand Marnier and Patron.

Jesus Briseño is chef and manager at Sol Y Luna.

The dining area is spacious at Sol Y Luna.

Greg and Maryann McBee enjoy lunch at the bar at Sol Y Luna.

Luna shrimp and fish delight, a sea bass fillet served over a bed of steamed vegetables and topped with large shrimp with special cream sauce is offered at Sol Y Luna.

Sol Y Luna has been in two locations in Bakersfield since they first opened downtown in 2013, and we’ve had mixed experiences. Loved the original (which closed in 2018), but when they opened a second in 2016 it was disorganized, unprofessionally operated and a distinct disappointment. More than one visit and we thought, given the undoubtedly high rent they’ll be paying in the upscale Grand Island Village shopping center, it’d be gone soon.

We were wrong, and acquaintances told us recently that the place had improved markedly as the years went on. So we did revisit and it was far more professional in both service and food from the kitchen. Sure, it’s pricey — $13.95 for a Cadillac margarita means you’re probably driving a Cadillac to visit this place. It’s also tasty food but those who value authenticity in their Mexican food will find the fare bland in a country-club-kitchen-kind of way. But the upgraded professional waitstaff, elegant but noisy atmosphere and freshly made corn and flour tortillas make it worth a revisit if you, like me, wrote it off years ago.

We visited on a Saturday night without a reservation (something I wouldn’t recommend) and were seated within 10 minutes. When we arrived, a customer who sounded like he’d been enjoying far too much holiday cheer was reminding the hostess that his group was in the bar waiting to be seated. She got them handled before seating us. The interior is very classy both in the bar and in the back area where we were seated, though as we noted conversation is a challenge particularly as a birthday party near us was quite festive. There is a glass-enclosed private room that looked to be hosting a bridal shower that night. And the woman making all those fresh tortillas was behind glass near the kitchen. There also is a really cool outdoor patio with heaters, though on this night no one was out there.

The waitstaff quietly bustled about in black shirts and used subdued vocal tones. On each table were colorful presentation plates that rested on black tablecloths for maximum visual impact. Far more polished and elegant than when this place opened.

My companion noted that tacos were hard to find other than on the combo plates. She ended up ordering the chicken mole ($17.75) with a glass of house chardonnay ($9) while I chose the carnitas ($20.50) with my Cadillac margarita ($13.95). For the price, it did come with one of those cool red plastic Grand Marnier tiny bottle holders, which you gently pull up to dispense the wonderful orange liqueur. And the margarita had a more interesting overall citrusy tone than the standard lime juice creation, with both lime and orange wedges under the ice.

Our biggest issue with the service was the timing of the soup/salad and the entrée. As in my salad initially impressed me, shaved carrots and cucumber with romaine (yeah, I like to live dangerously) and a house-made creamy cilantro dressing, but I was only halfway through it when the entrees arrived and I just couldn’t go back.

My companion is a mole aficionado and on her plate the shredded chicken was presented in a dark brown dish that, while not among the all-time greats in her taste memory, was something she said she'd order again, and those marvelous tortillas (we selected both corn and flour) were a pleasant wrap that helped cement the favorable impression. She chose pot beans, joined by Spanish rice and a small salad on the plate. Much more impressive overall than when it opened.

My plate was pretty much on the same level. Carnitas comes in so many forms nowadays, but basically it’s supposed to be simmered in lard until crisp, though I’ve known some kitchens that bake it then fry it crisp. You never know what you’re going to get. Here’s a cleaned-up version that the menu described merely as “slow-braised pork” that is cut into slices and grilled until crispy. Pretty tasty especially since some of the fat is left on to flavor the meat. I loved that the plate included both guacamole and pico de gallo, the better to flavor it in those tortillas.

In short, Sol Y Luna is a vastly improved place and does have its charms.