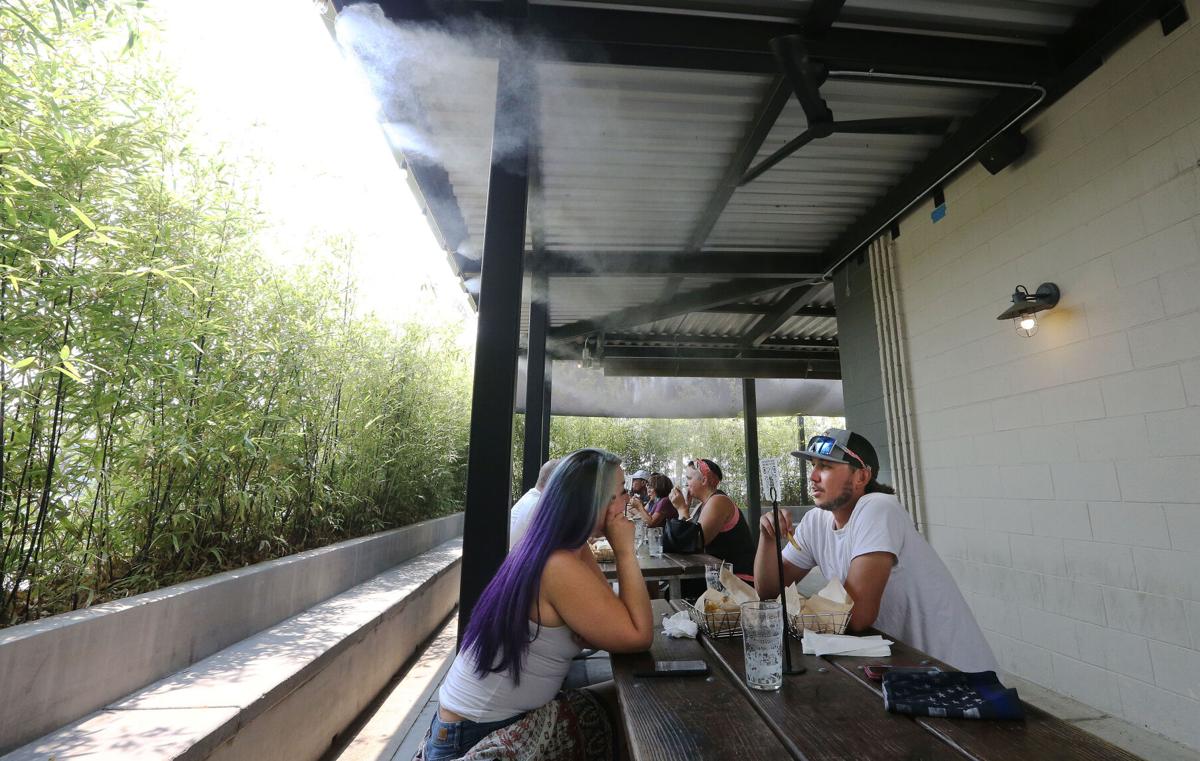 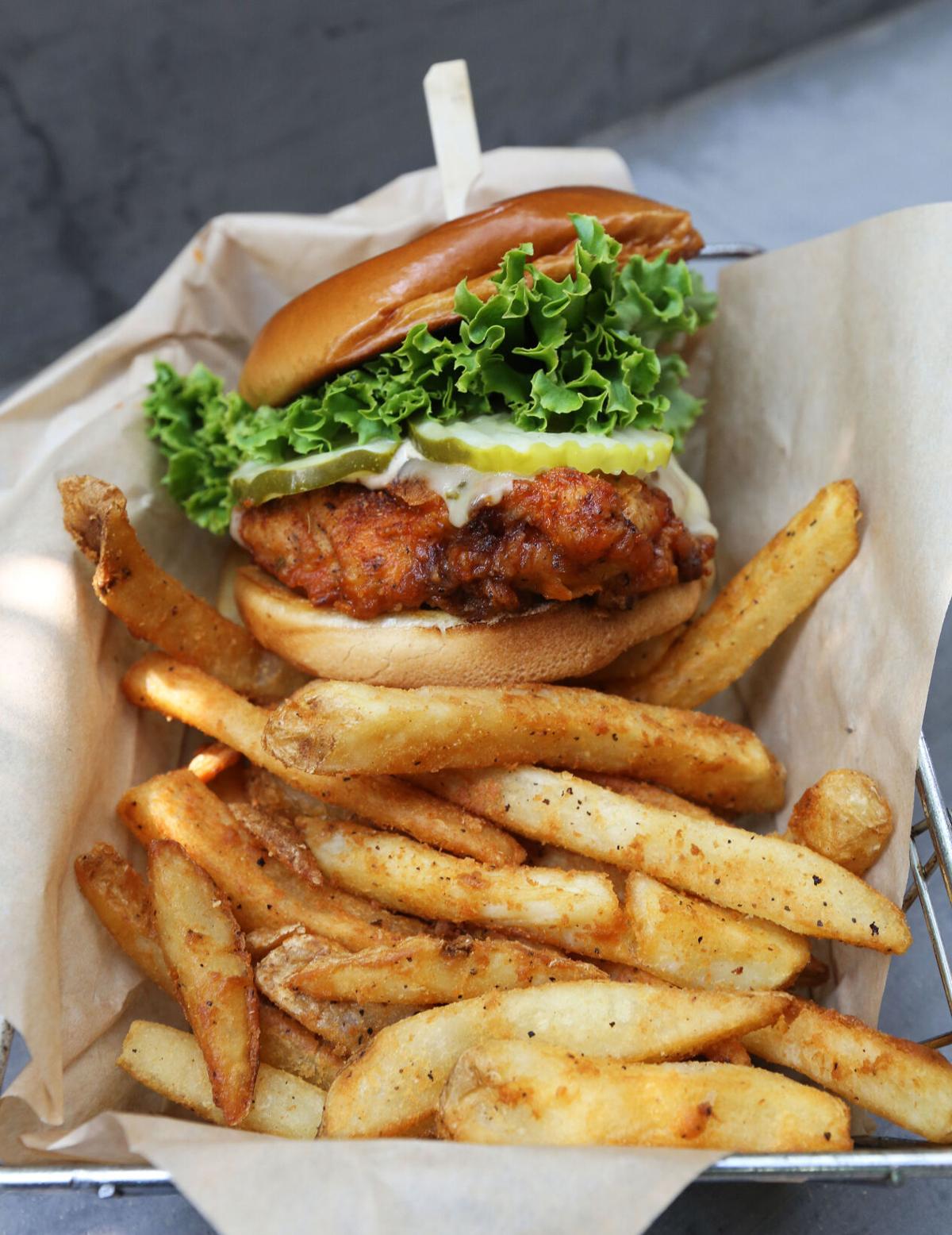 Spice up your life with the Nashville West chicken sandwich at Temblor Brewing Co. 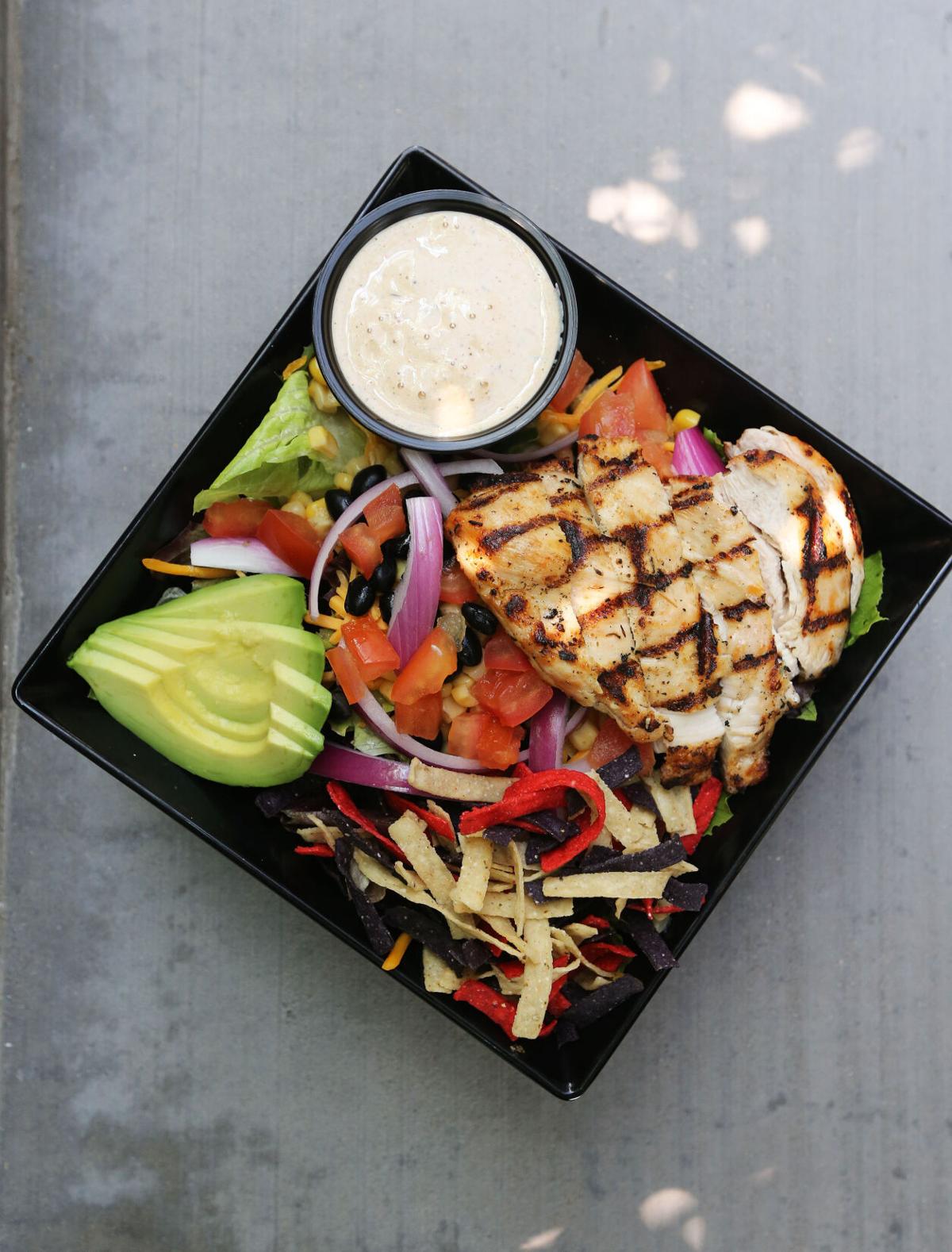 Make a healthier choice with the Southwest chicken salad at Temblor Brewing Co. 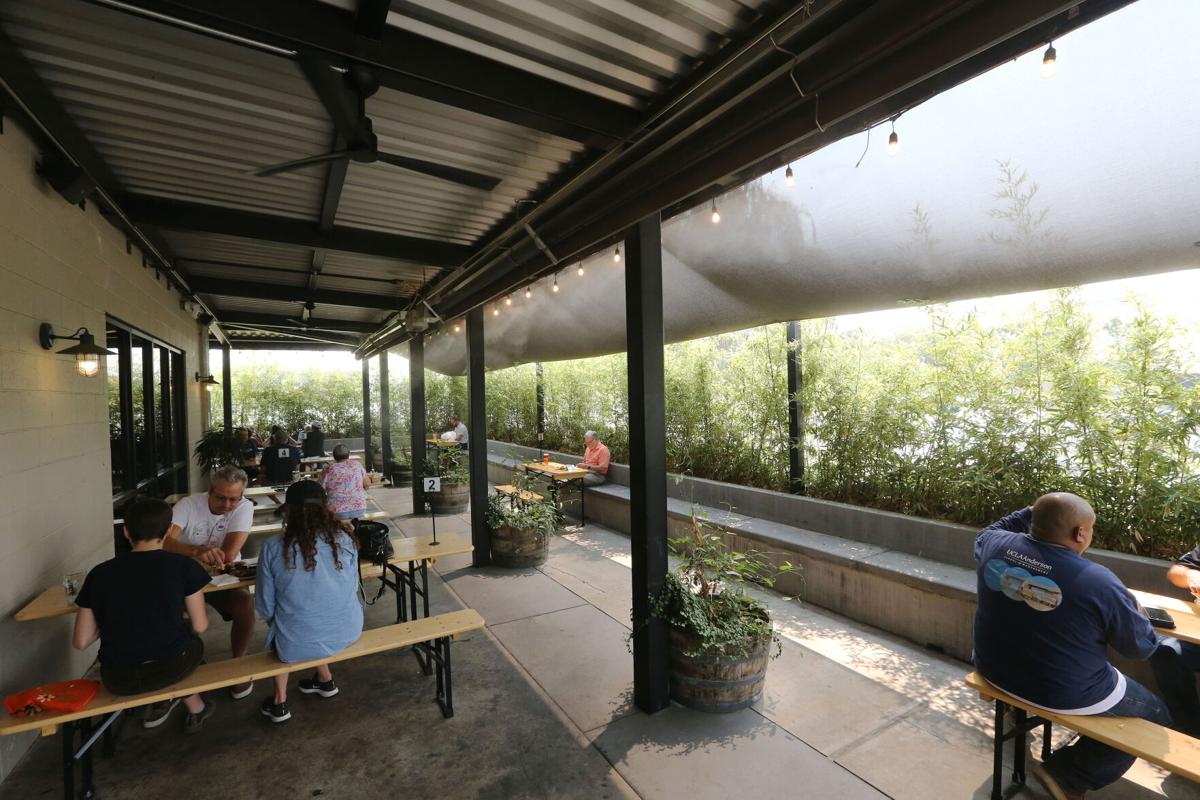 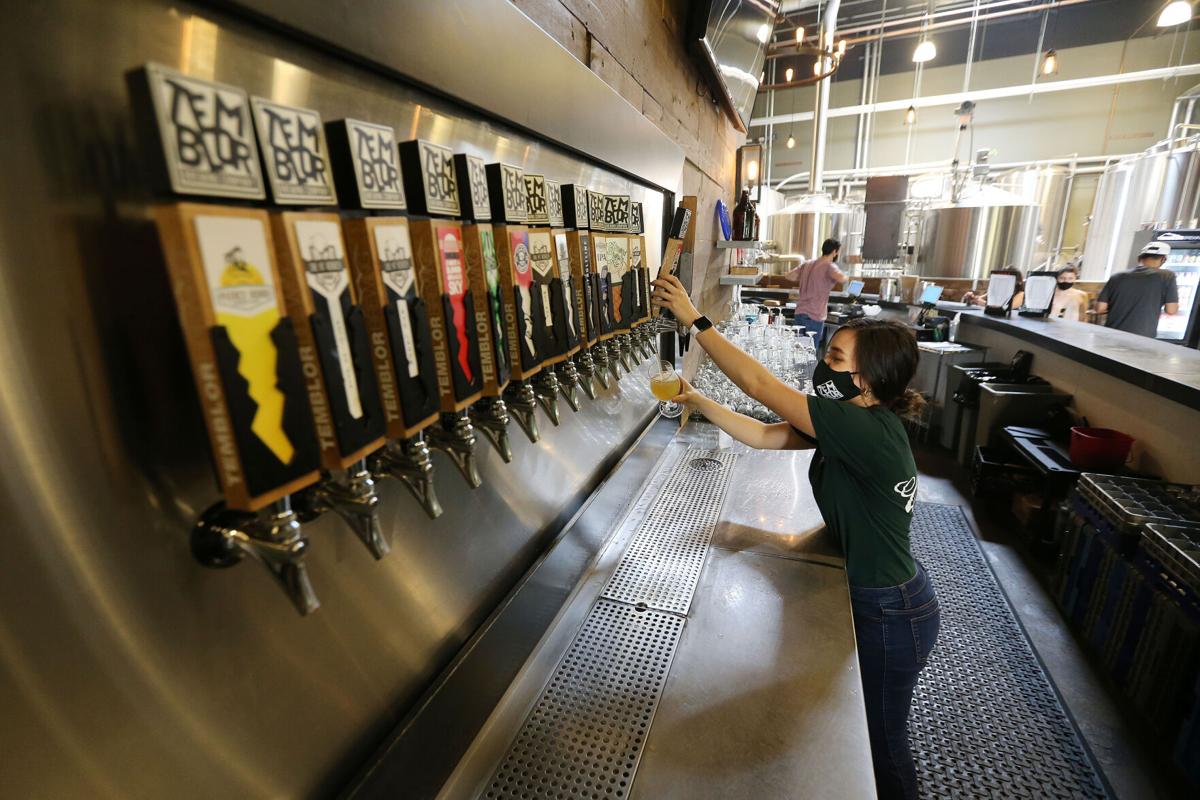 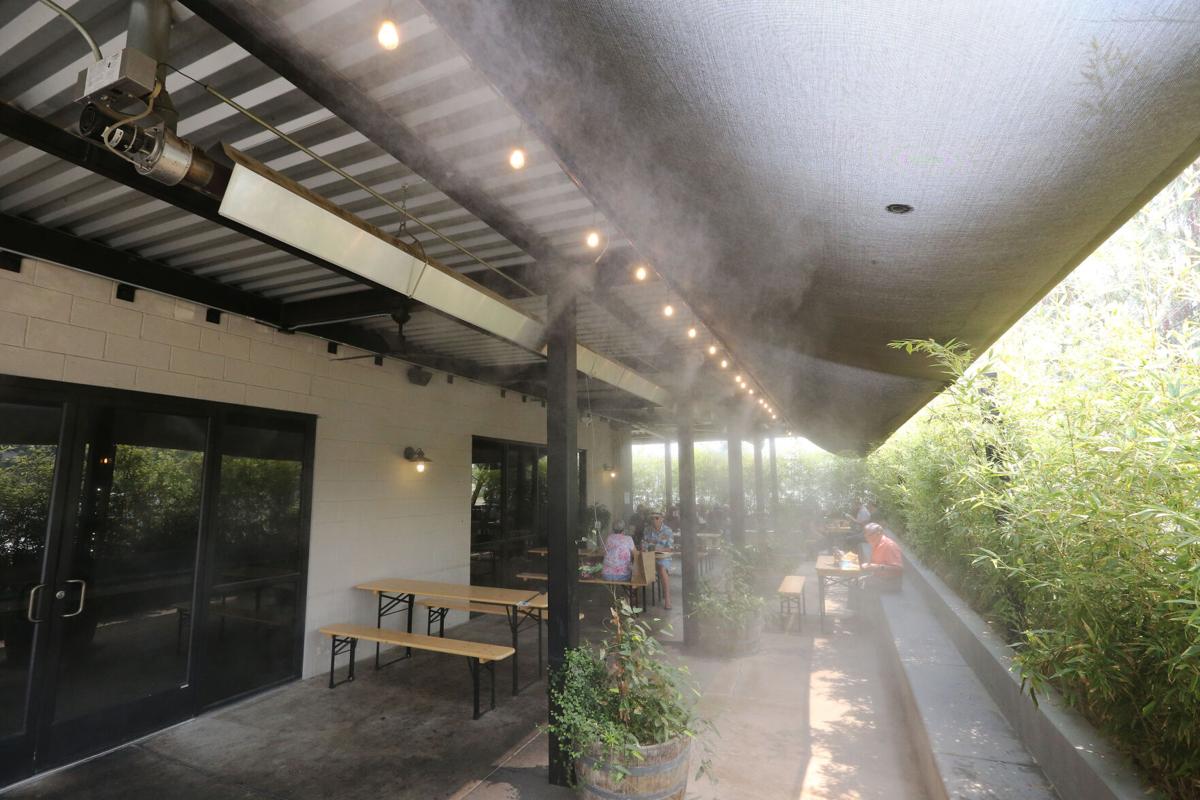 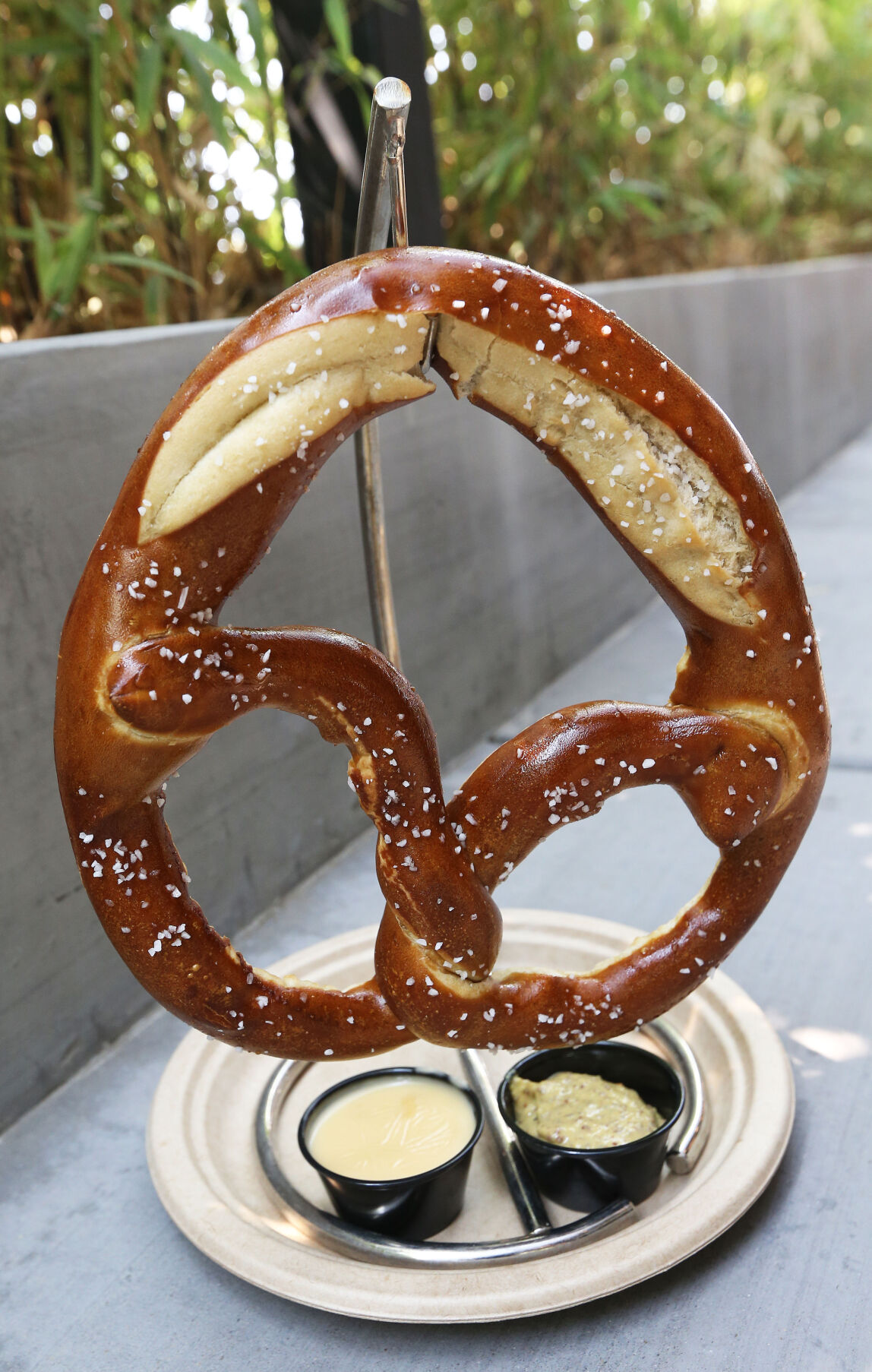 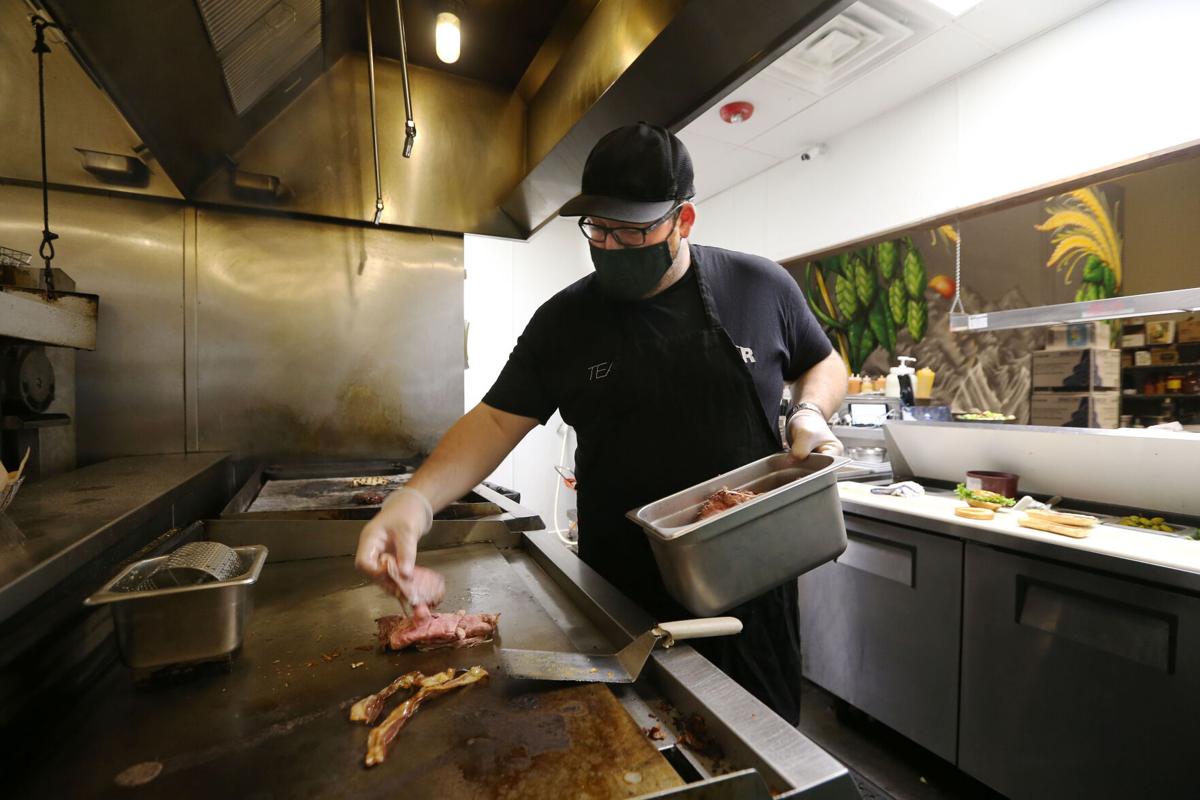 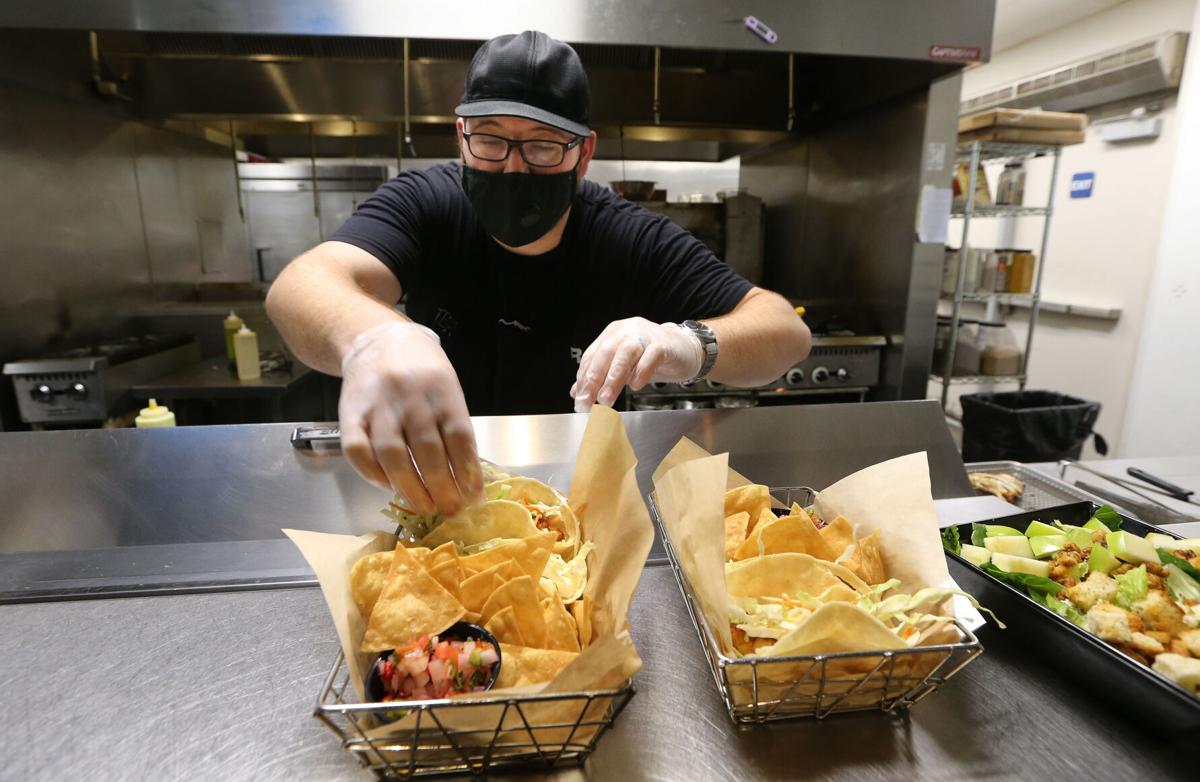 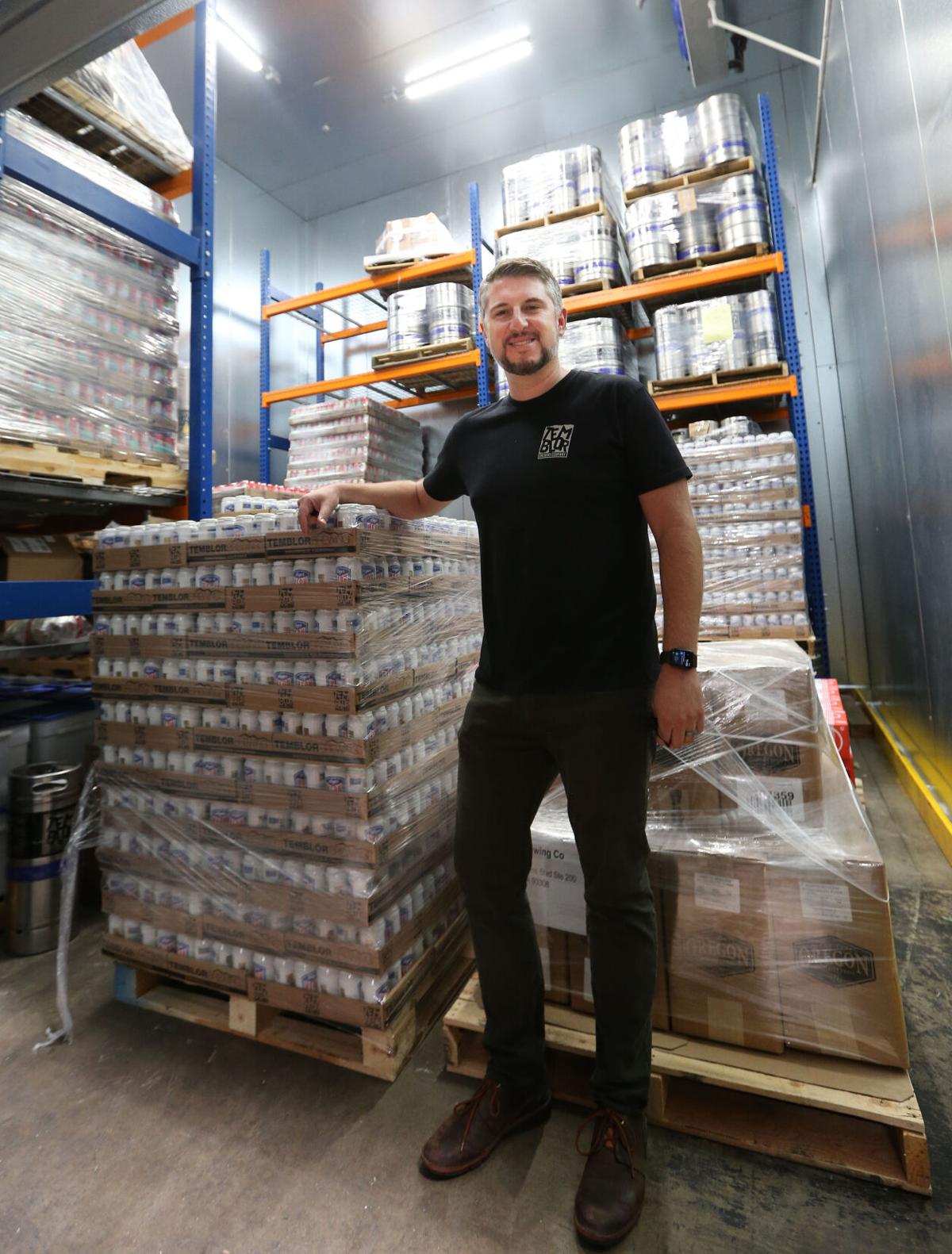 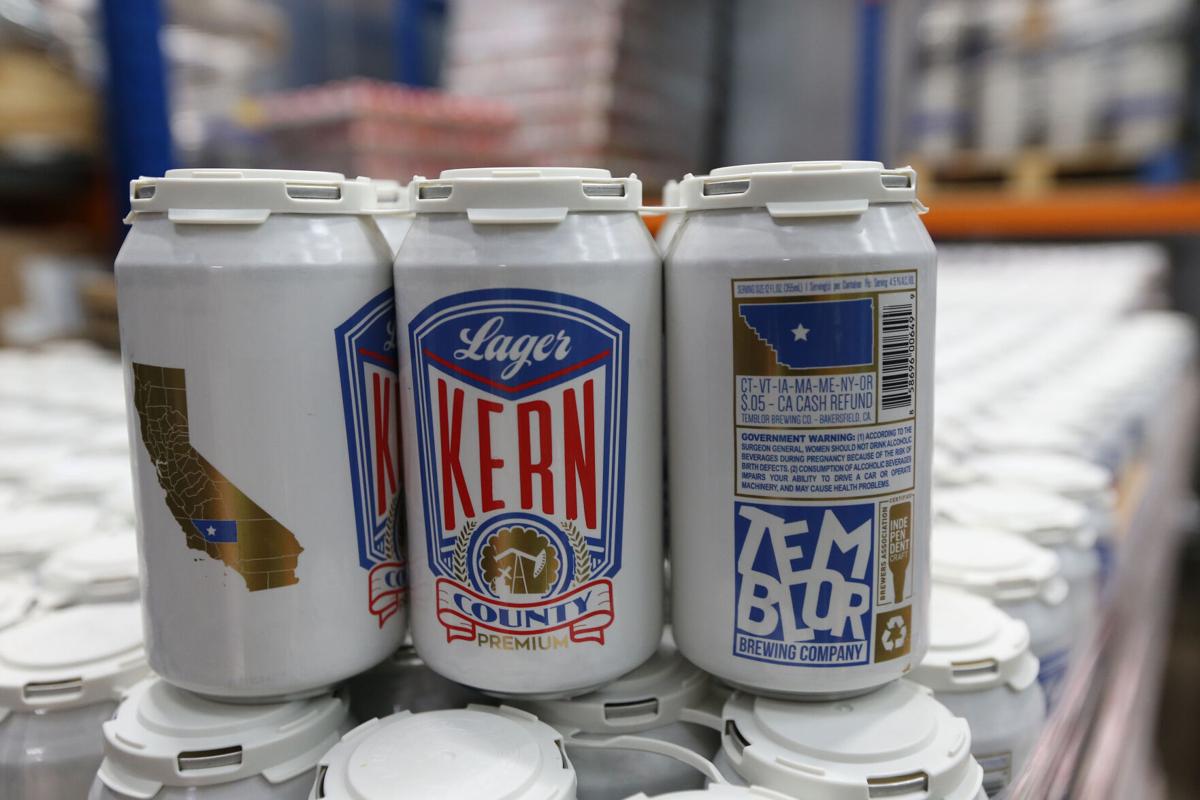 Temblor Brewing Co. President Don Bynum says the company is selling more beer in the Los Angeles area recently and so his brewery canned 2,400 six-packs to meet demand in the Central Valley and Los Angeles markets.

Spice up your life with the Nashville West chicken sandwich at Temblor Brewing Co.

Make a healthier choice with the Southwest chicken salad at Temblor Brewing Co.

Temblor Brewing Co. President Don Bynum says the company is selling more beer in the Los Angeles area recently and so his brewery canned 2,400 six-packs to meet demand in the Central Valley and Los Angeles markets.

Yes, patios have been exploding in parking lots all over town since indoor dining was once again a victim of the pandemic. But I’m hard-pressed to think of a place that’s done it better than Temblor Brewing Co.

This place is an oasis. We went on one of those early August days where once again it was over 100 degrees. While at Bill Wright Toyota earlier that day, I heard an employee there describing to a mystified out-of-towner getting work done on his car that though we’d been over 100 eight days in a row: “It’s a dry heat.” If you’re not a resident, I don’t think that makes it any better. But Temblor’s covered patio, with a vertical bamboo border shielding us from any sun and the parking lot and persistent misters that are quite effective, you can feel like you’re near the beach in L.A. My companion was stunned by the comfort level. It was very pleasant. On a weeknight there were few vacant tables.

Under the current system, you order at the bar and, somehow, they get it out to you without giving you a number or anything. The menu looks a bit simplified, but they’ve got a lot of our old favorites that we will talk about later. On this visit we sampled the Southwest chicken salad ($14.25) and the Nashville West chicken sandwich ($13.95).

The sandwich was a showstopper, according to my companion, who limited herself to three bites in a great show of restraint. It’s on a brioche bun (she mentioned that the burgers and sandwiches here always seem to have good buns, which is true) and features a thick, moist slab of chicken breast meat that was breaded with a Louisiana spice rub and crisply fried before being seasoned with Buffalo sauce. It’s rounded out by pepper jack cheese, lettuce, pickles and a chipotle ranch that I recommend you get on the side so as not to conflict with the other sauces. It is a winning Nashville chicken sandwich, as it has the right combination of oiliness and smoky spiciness to be true to the spirit of what that other country music capital offers. It came with fries that were soft and sweetly starchy, like fresh-cut spuds with a very light batter coating on the outside. My companion loved those, too.

Her salad had a charming combination of mixed greens, red onion, black beans, fresh roasted corn (a big plus), perfectly ripe avocado, tortilla strips, cheddar, avocado and chopped grilled chicken breast meat. They bring it with the chipotle ranch on the side, which is perfect so as not to wilt those great greens.

I resisted so many old favorites that are still on the menu that we’ve enjoyed in the past, such as the Greek salmon salad ($14.25) with Kalamata olives, feta cheese and a super Mediterranean vinaigrette, the prime rib French dip ($13.95) with provolone and sautéed onions, and the pork banh mi sandwich ($12.95) with jalapeños, cucumbers and a sriracha aioli.

In addition to those must-orders, I also love the way they do burgers. Seriously awesome customization possibilities are there for the taking. You start by picking your patty, with options including a chicken breast, the Impossible plant-based patty, their signature patty made from brisket and chuck (a flavorful combination I’m even seeing in local grocery stores) and a grain-fed Wagyu-style patty. The typical add-ons are available for $1 to $2 extra, but then you choose one of five different styles, my favorite being the seismic (white cheddar, red wine caramelized onions, chipotle ketchup and arugula).

If you’re not that hungry, there’s great choices on the appetizers menu including the soft pretzel with house-made beer cheese ($9.25), the beer-battered artichoke hearts ($9.25), the roasted garlic hummus ($8.95) with flatbread and veggies and the crispy Brussels sprouts ($7.95). The rotating flatbread when we visited was a yellow curry chicken creation ($12.25) that some friends said was awesome.

Service was solid and personable from the small staff. The interior is still spaced at a socially distanced format, but that won’t be relevant till we get this thing back under control.

No matter how hot it is, Temblor Brewing Co. can be recommended for a fine dining experience.

Chicken, again. Salad, again. I am sure if they had Salmon you would order it. Come on, they had to something a little more interesting then just chicken salad on their menu.