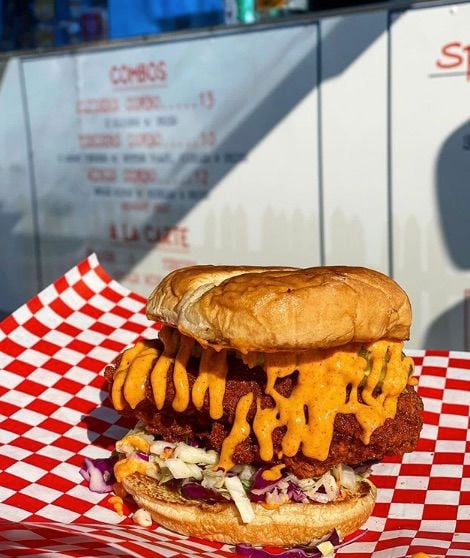 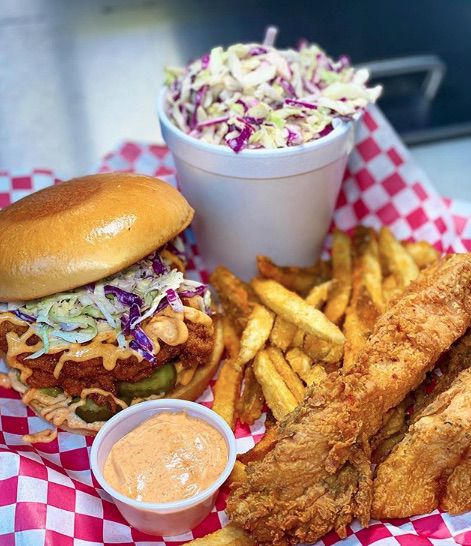 The lightly dressed coleslaw balances the heat of the meat at Bucky's Hot Chicken. 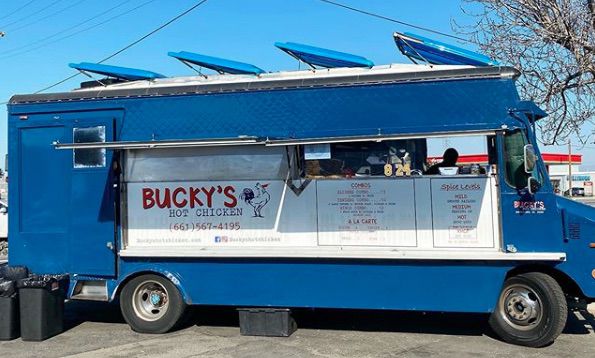 Bucky's Hot Chicken truck has been parking in the lot of the Chevron station at Coffee and Brimhall. 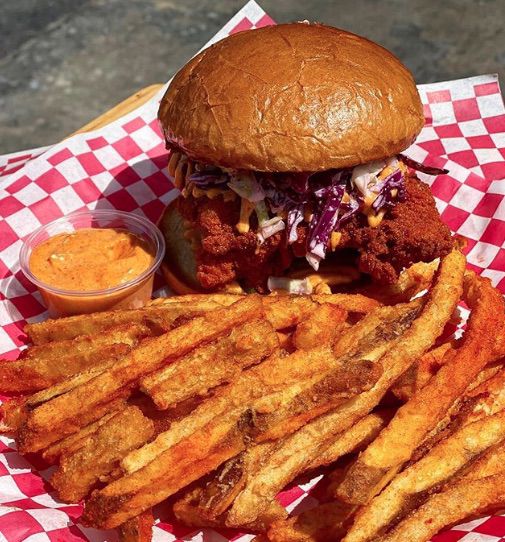 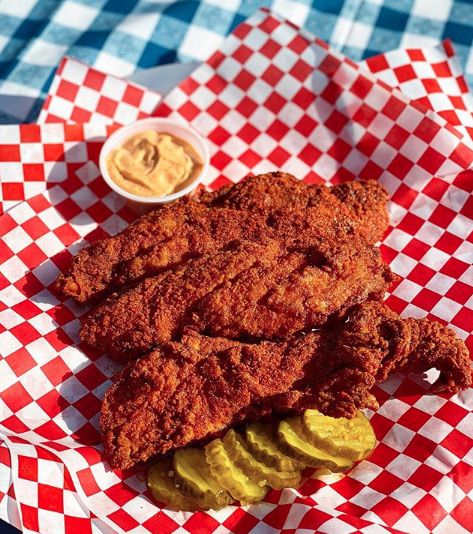 It's not Nashville hot, but the tenders at Bucky's Hot Chicken still go well with pickles. 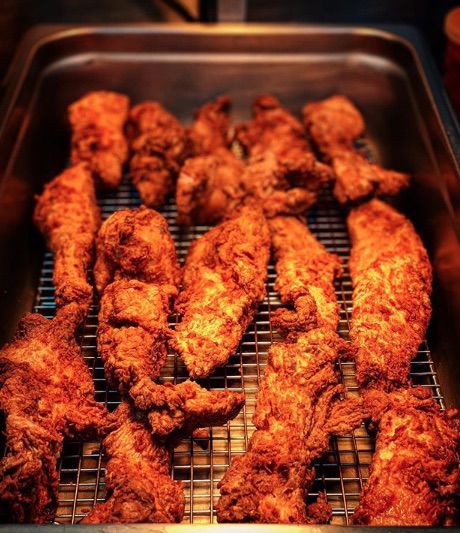 Tenders fresh out of the fryer at Bucky's Hot Chicken. 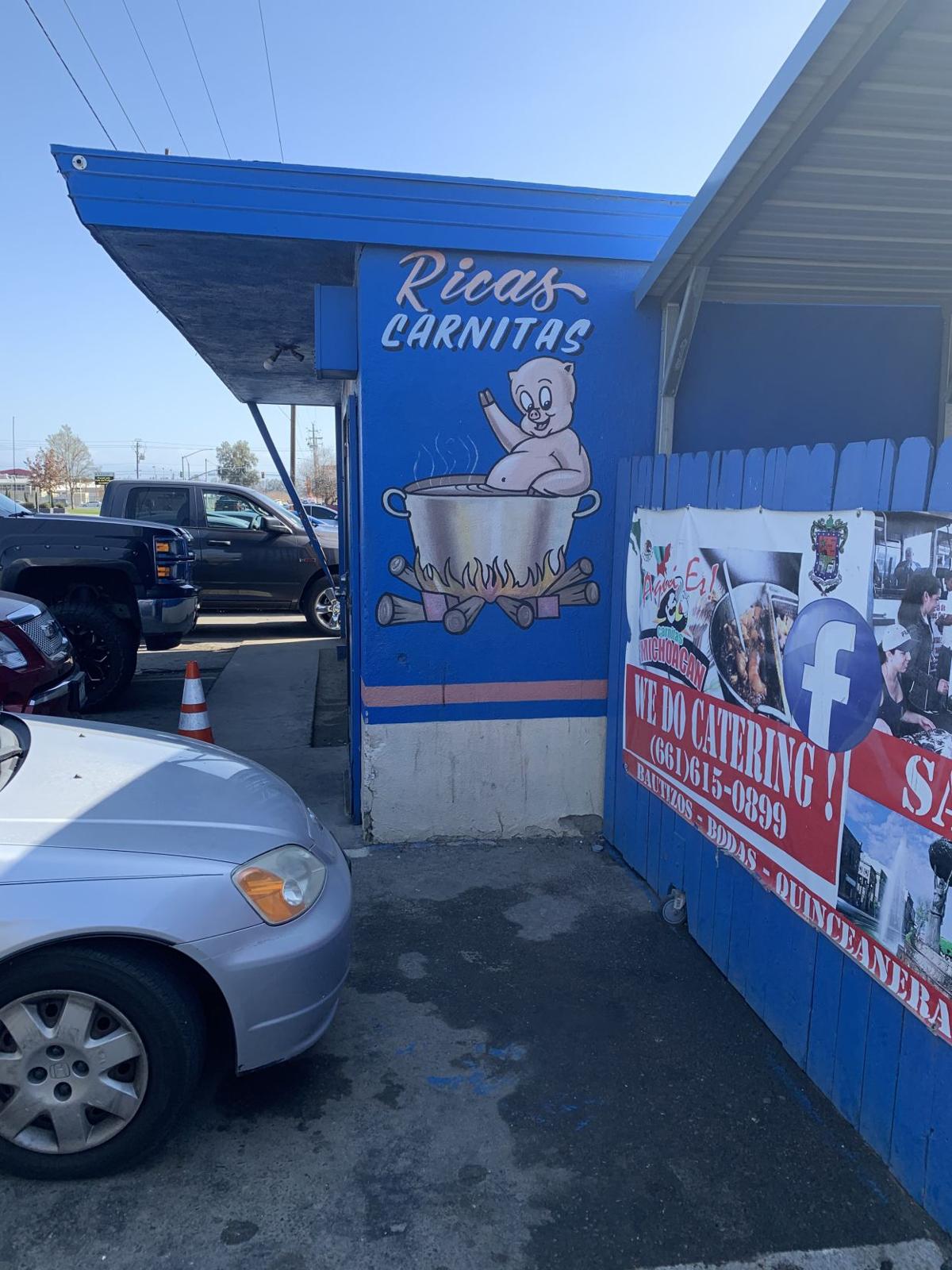 The exterior of Carnitas Michoacán off Ming Avenue. 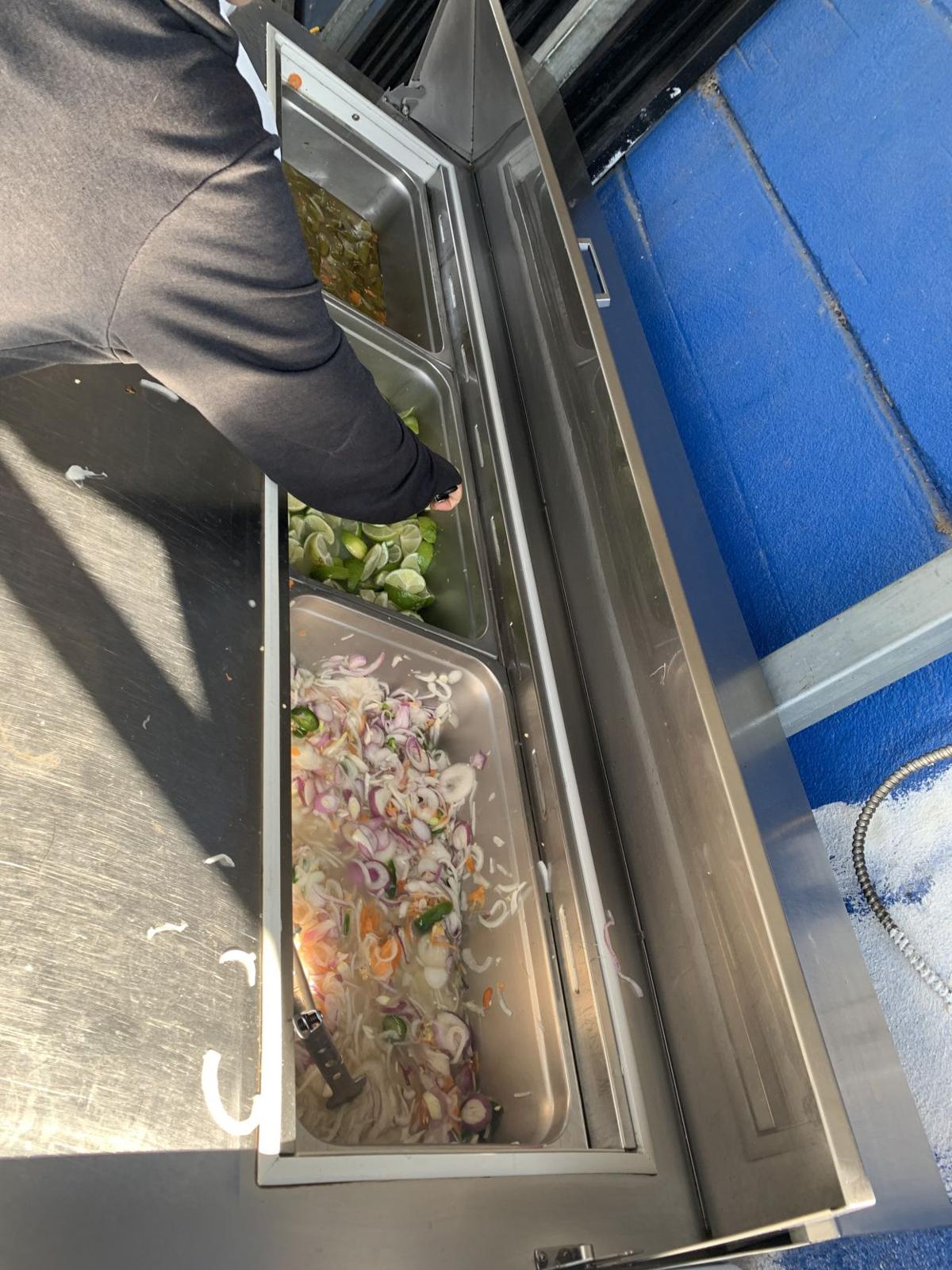 Lots of tasty toppings at the salsa bar of Carnitas Michoacán. 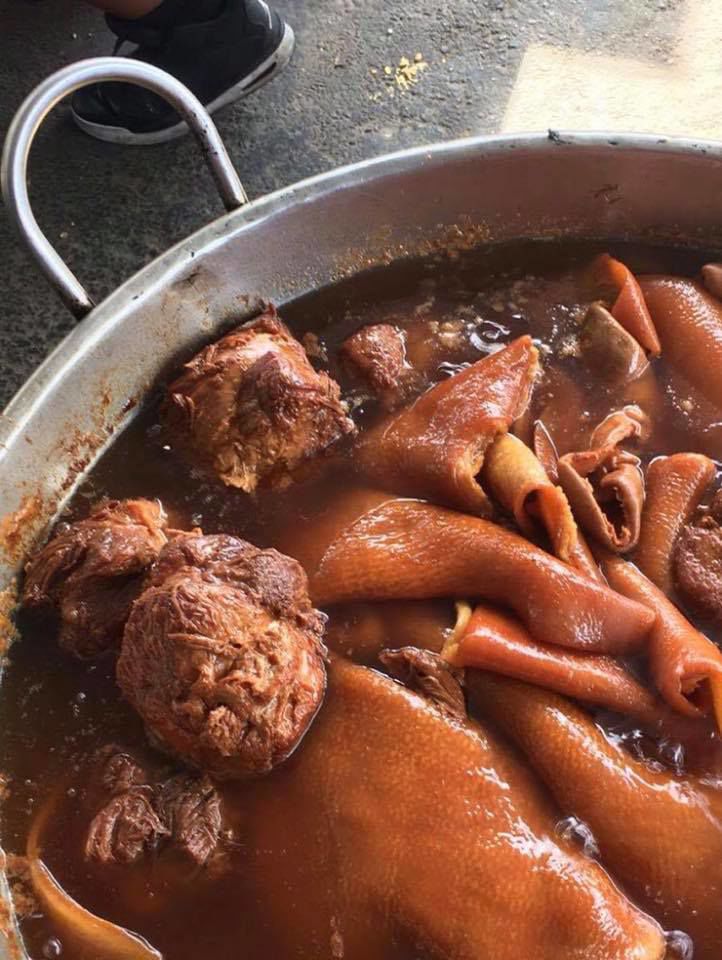 There's a lot of flavor in that pot at Carnitas Michoacán.

The lightly dressed coleslaw balances the heat of the meat at Bucky's Hot Chicken.

Bucky's Hot Chicken truck has been parking in the lot of the Chevron station at Coffee and Brimhall.

It's not Nashville hot, but the tenders at Bucky's Hot Chicken still go well with pickles.

Tenders fresh out of the fryer at Bucky's Hot Chicken.

The exterior of Carnitas Michoacán off Ming Avenue.

Lots of tasty toppings at the salsa bar of Carnitas Michoacán.

There's a lot of flavor in that pot at Carnitas Michoacán.

Editor's note: These food trucks were reviewed before restrictions were put in place to prevent the spread of the coronavirus. Hours and offerings may vary.

Today I’m going to earn my keep by telling you about two pretty amazing food trucks started by people passionate about spicy chicken strips and authentic carnitas. Originating as passion projects, they have been fueled by social media and grown into formidable but inexpensive dining options. If you can find them, which is doable using social media to track where and when they are open.

First stop is Bucky’s Hot Chicken, which we ran into at the Chevron station at the corner of Coffee Road and Brimhall, tucked into a corner of the parking lot away from the pumps with two metal picnic tables nearby for seating. Bucky’s started out as a home business from someone who liked what Raising Cane’s was doing but thought it needed a serious kick in the heat level. Not really a smoky-spicy Nashville chicken treatment —though the “sliders” here do include pickles and coleslaw to mediate the heat — but the chicken has far more punch than the aforementioned chain provides with their product. The spice is in the batter, really, and ranges from mild to medium to hot to “xhot.”

As I was ordering, a young man wearing a CSUB sweatshirt and crutches confessed to having ordered the extra hot. I do not believe that was why he was on crutches, but I cannot be sure. The half-dozen or so customers lingering around the truck included many neophytes like me and we were hashing out what spice level to choose. We looked at him in awe. The xhot vet enlisted the testimony of his wife when he was trying to contend it wasn’t that bad even though there was a red box around the flavor name and a “Danger: try at your risk” warning.

I went with the two-slider combo ($13) and chose medium and hot. Everything is served in a white clamshell container — a lot of the customers were getting takeout as the seating is limited — and they graciously labeled which sandwich was which on the outside, though one bite is all you need to tell the difference. The buns, while ordinary, appeared grilled and buttered, and the coleslaw was the clean, lightly dressed type that is so popular nowadays. Calling these sliders is really a misnomer. They’re chicken sandwiches, with long, thick fried chunks of breast meat.

The medium is really great. My favorite. You feel the heat, but it doesn’t hit you in the face. The hot is perfect if you need your sinuses cleared, which I did due to allergies on this particular day. It has one of those lingering burns that you swear changes your heart rate, respiration and most bodily functions. I should have ordered an xhot just to see if it would’ve landed me in crutches.

The fries appear to be fresh cut, coated in a spicy batter that I’d put at the medium level. They’re crisp outside, soft inside and in so many different lengths and thicknesses. Bucky’s started as a home business, with people submitting orders via Instagram. Undoubtedly the health department took exception to that but the business was strong enough to transfer it into an old blue food truck. The menu is exceptionally limited — three whole wing combos ($12) are available only on Wednesdays and Saturdays, and the only other combo features tenders ($10). At this point, Bucky is trying to keep it simple.

The other mobile find is Carnitas Michoacán, which a reader tipped me off to, located on Ming Avenue just west of the fairgrounds. I can’t give you his name because if I did, he’d have to go into the witness protection program. People don’t want you to know about this place. It’s open only two days a week: Saturday and Sunday starting at 7 a.m. until they run out of meat, which can happen at 1 or 2 p.m. People get angry when their mind is set on authentic carnitas and none is available. It’s not the only thing on the menu; they also offer a decent birria de chivo (goat) taco, tripe and other meats. But I was tipped off that the carnitas was the best in town, so that’s what I had to try.

My big mistake was arriving at 11 a.m. By then all the pure carnitas was gone and to stretch out the supply they only offered “mixed,” which means ear, skin, pork tripe and other parts of the pig mixed in with the regular pork. The guy taking my order looked at me with pity on my cluelessness and said, “We open at 7 a.m.” Nonetheless I ordered three mixed and two goat tacos, which came to $10.50. I’m guessing $2 each for the mixed and $2.25 for the goat but there is no menu board. There are no rice and beans. This is a Mexican meat taco truck with six blue picnic tables under a corrugated metal shade. There’s salsa available from a plastic barrel container with a faucet and three bins that include purple onions mixed with jalapeno, lime wedges and pickled green peppers in another.

What is the draw? These folks know how to make meat great. The late great Pulitzer prize-winning food critic Jonathan Gold would love this place. The carnitas, for one, meets the happy medium between fried crunchy and soft and wimpy. It’s got a simple heavy lime flavor mixed with the irresistible appeal of pork fat. Some caramelization is present here and there in the short stands of the meat but believe me I now understand why everyone gets it for breakfast. The goat, usually called birria, is supposedly the meat of the future as it has no cholesterol and still gives you the satisfaction you get as a carnivore. The goat here is prepared with mild chilis and not too spicy, gives off some gamy notes and is usually presented with a cup of consommé but the kitchen forgot mine. Of course, I got the white onions and cilantro garnish on all of that, and it was good. Another friend said they have posole stew, but without a menu board it’s best to go with what you know.

In the future, I’ve learned my lesson and will be getting breakfast there pre-church or pre-gym. But let’s just keep it all between you and me; don’t tell friends, family, distant relatives, visitors, anyone else on social media. I’m just trying to make sure the supply is there for both of us.

Atmosphere: One and a half stars

What do you mean goat meat has no cholesterol??? All meat has cholesterol. It makes up part of the cell membrane of animals