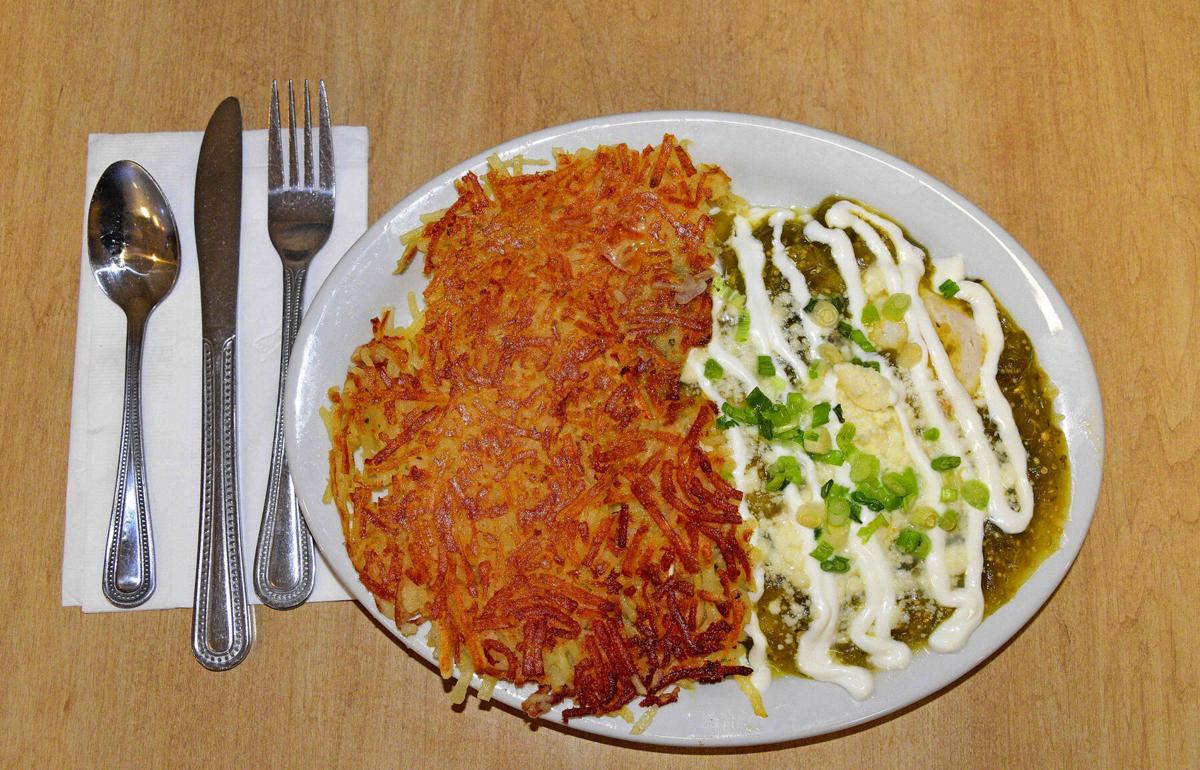 A popular breakfast item at Henry's Cafe is the huevos rancheros, which can be topped with chile verde sauce.

All servings are hot and bountiful at Henry's Cafe in Tehachapi. 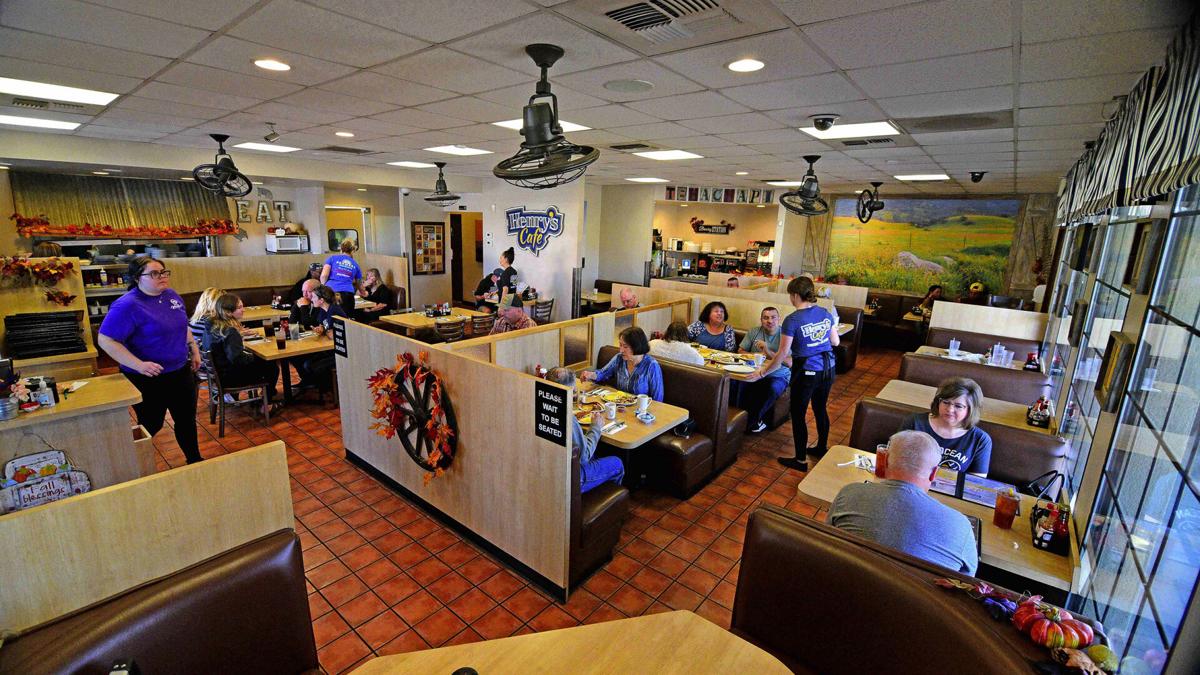 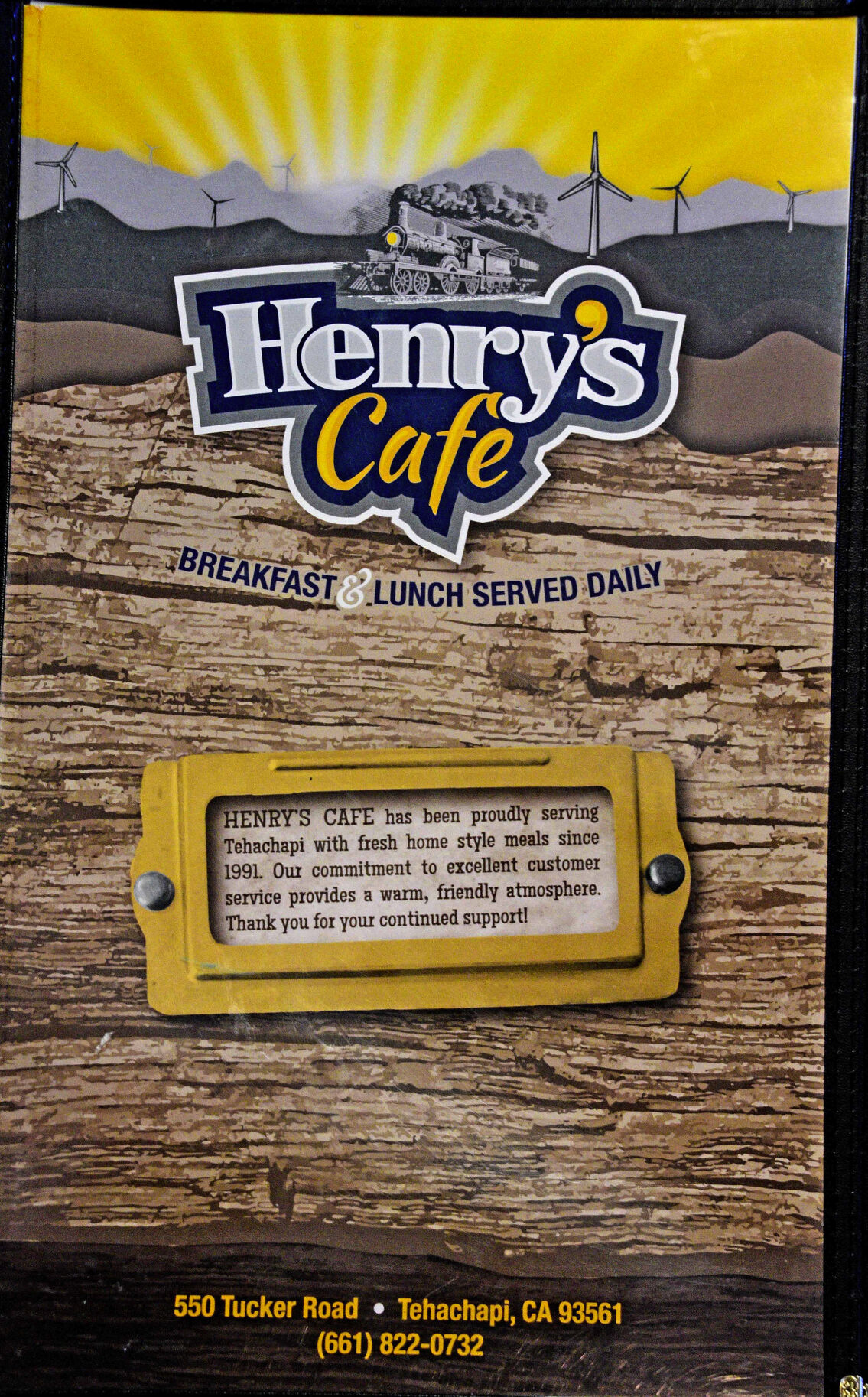 Henry's Cafe in Tehachapi has been a local favorite since 1991. 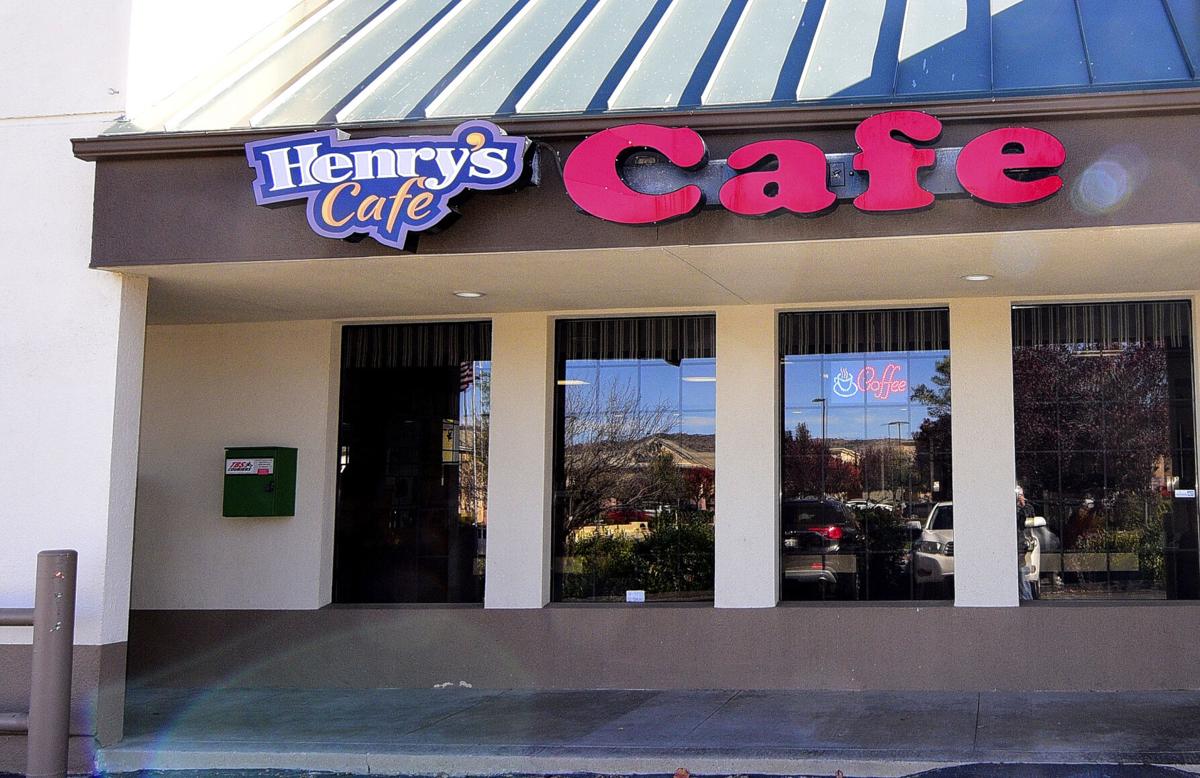 Henry's Cafe is located at 550 Tucker Road in Tehachapi. 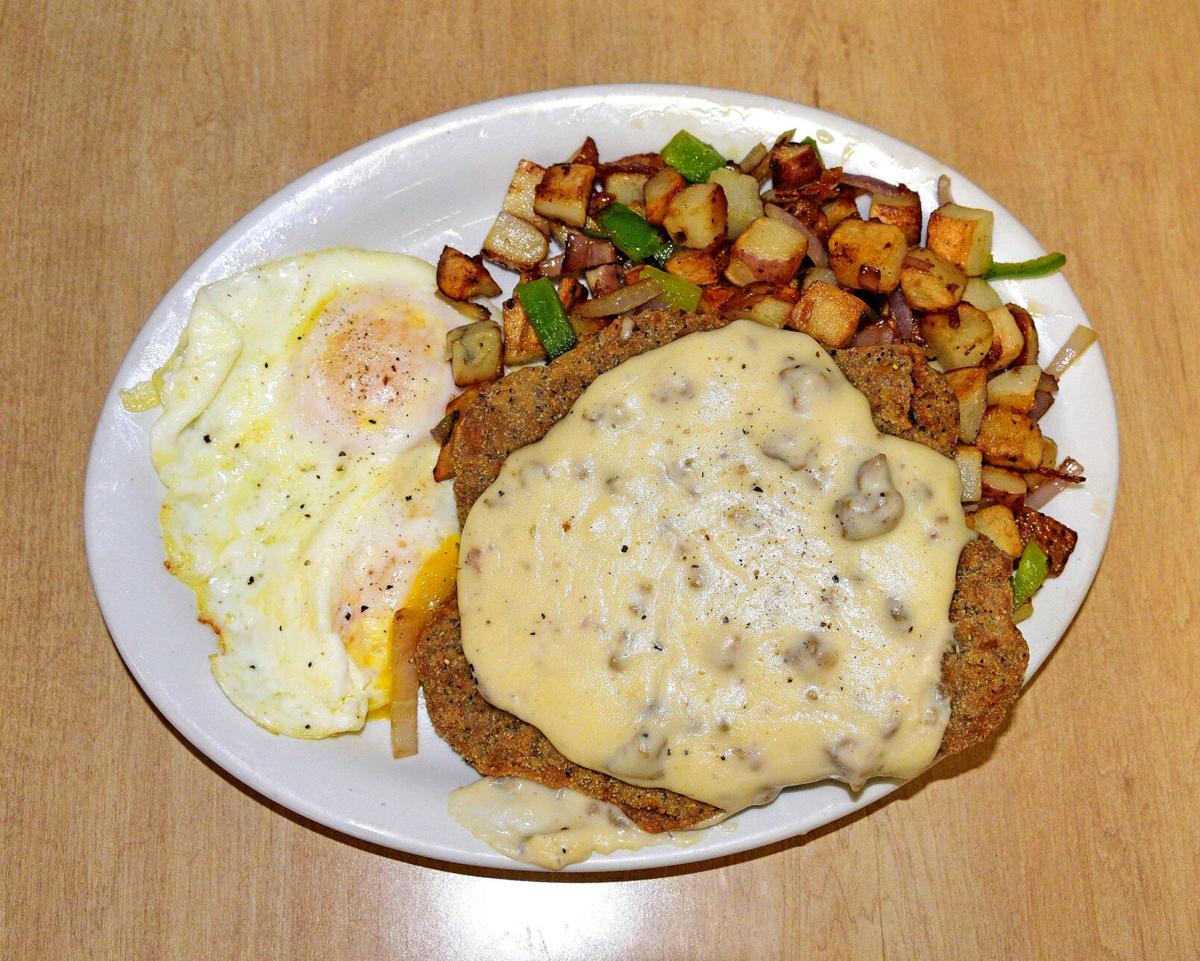 The chicken-fried steak with eggs is a breakfast favorite at Henry's Cafe. 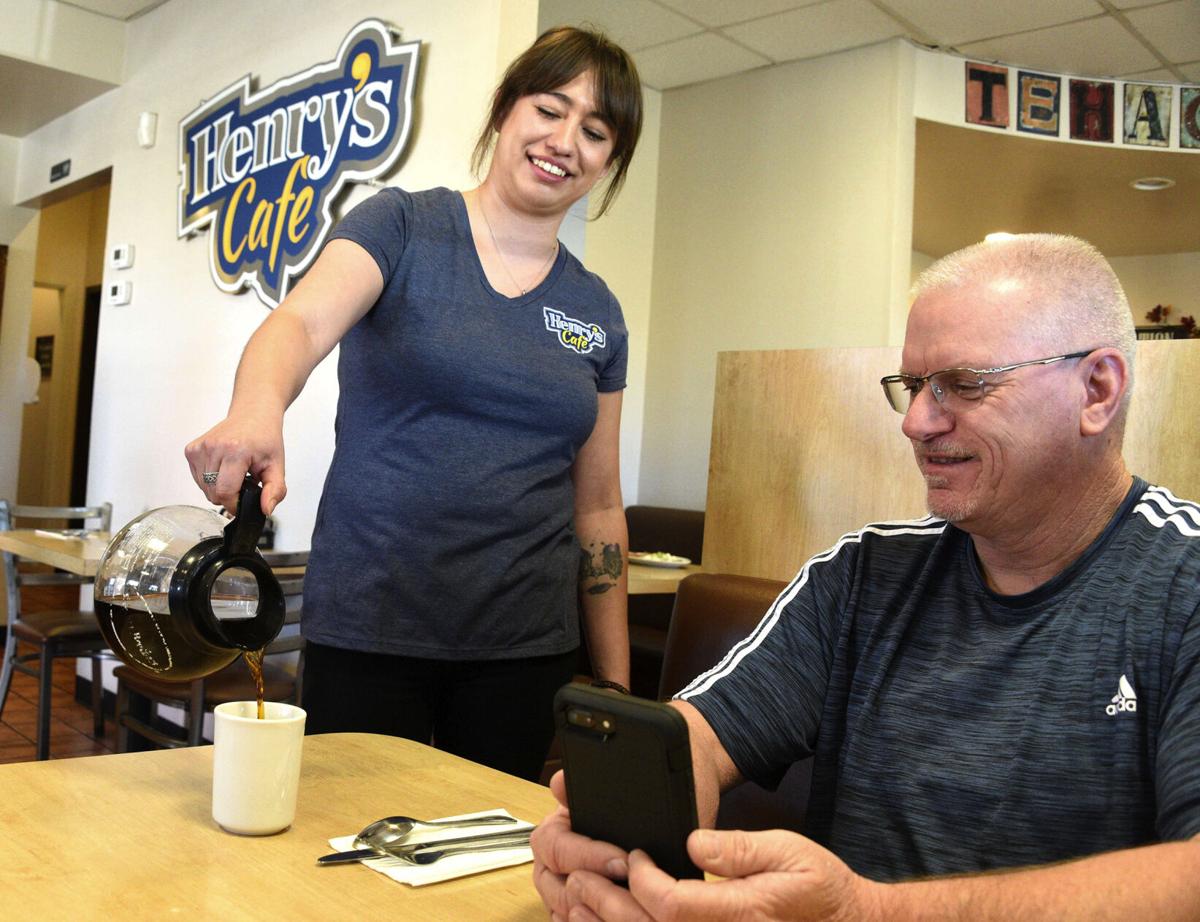 A popular breakfast item at Henry's Cafe is the huevos rancheros, which can be topped with chile verde sauce.

All servings are hot and bountiful at Henry's Cafe in Tehachapi.

Henry's Cafe in Tehachapi has been a local favorite since 1991.

Henry's Cafe is located at 550 Tucker Road in Tehachapi.

The chicken-fried steak with eggs is a breakfast favorite at Henry's Cafe.

I was told by a friend that Henry's Cafe was the 24th Street Cafe of Tehachapi and I needed to check it out.

It was officially fall, the apples were calling and, even with the pandemic, people were flocking to the mountains, so I used that as an excuse to visit without stopping by old favorites I've written about in the past such as the amazing Kohnen's Country Bakery or the barbecue at Red House.

(OK, I couldn't resist, and had to stop in after eating at Henry's to get something from Kohnen's, a small lemon-blueberry Bundt cake, but as usual on a weekend the line was out the door, with everyone writing their order on slips of paper to move things through as quickly as possible.)

Henry's itself had a half-hour wait, and the dining room is pretty small. Open for 30 years, the restaurant is in a shopping center near a busy car wash and a busy oil change spot, so parking is at a premium. We got on the list and waited in the tiny room just outside the front door (most on the list were waiting outdoors in the clean fall air).

A regular standing nearby watching me scan the menu gave me the lowdown.

"Everything is good — you can't wrong," he said. "They got new owners a few months ago and they spiced things up. You know there's a lot of old people in Tehachapi and they like bland food. He's made it livelier. I like the huevos rancheros, but I have them put some of the chile verde on top instead of green sauce."

The power of suggestion worked on my companion, so that's exactly what she ordered ($16.95 plus a $4 charge for the pork stew on top), and I considered many options before settling on the chicken-fried steak with eggs ($13.95).

I think comparing this place to 24th Street Cafe in Bakersfield is a bit of hyperbole, as you don't see things like trout with eggs, corned beef hash, smoked tri-tip scramble or pumpkin pancakes. It's a little more conventional, but we were pleased by the quality of what we sampled and wouldn't hesitate to stop in again.

My companion did think the chile verde was a respectable version that could hold its own against 24th Street Cafe, with sour cream and queso fresco drizzled all over it. The tortillas underneath were soft probably due to all the sauce, and the huge portion of hash browns was particularly impressive ("It's been so long since I had good hash browns," she noted, "without an offensive oily taste.") along with whole pinto beans in a dish on the side covered with pico de gallo.

I chose the home fries with my meal, and they were even better, tiny bits of very brown, white onions and green pepper mixed into the tiny, crunchy chunks. The gravy was rich with smoky meat flavor, the chicken-fried steak crispy (almost certainly deep-fried instead of pan-fried) and irregularly shaped like some sort of emoji trying to wave to you.

The decor is pretty Denny's-like with the exception of the cool framed poster photos on the wall, of local treasures like the Tehachapi Loop and the wind towers. Yeah, you see them on the drive up and it's interesting that there seems to be some civic pride about that industry. My companion noted the interesting small brown ceiling fans above, which can be adjusted to blow in different directions.

Service was small-town friendly from Caitlin, who really had her hands full with the Saturday morning crowd.