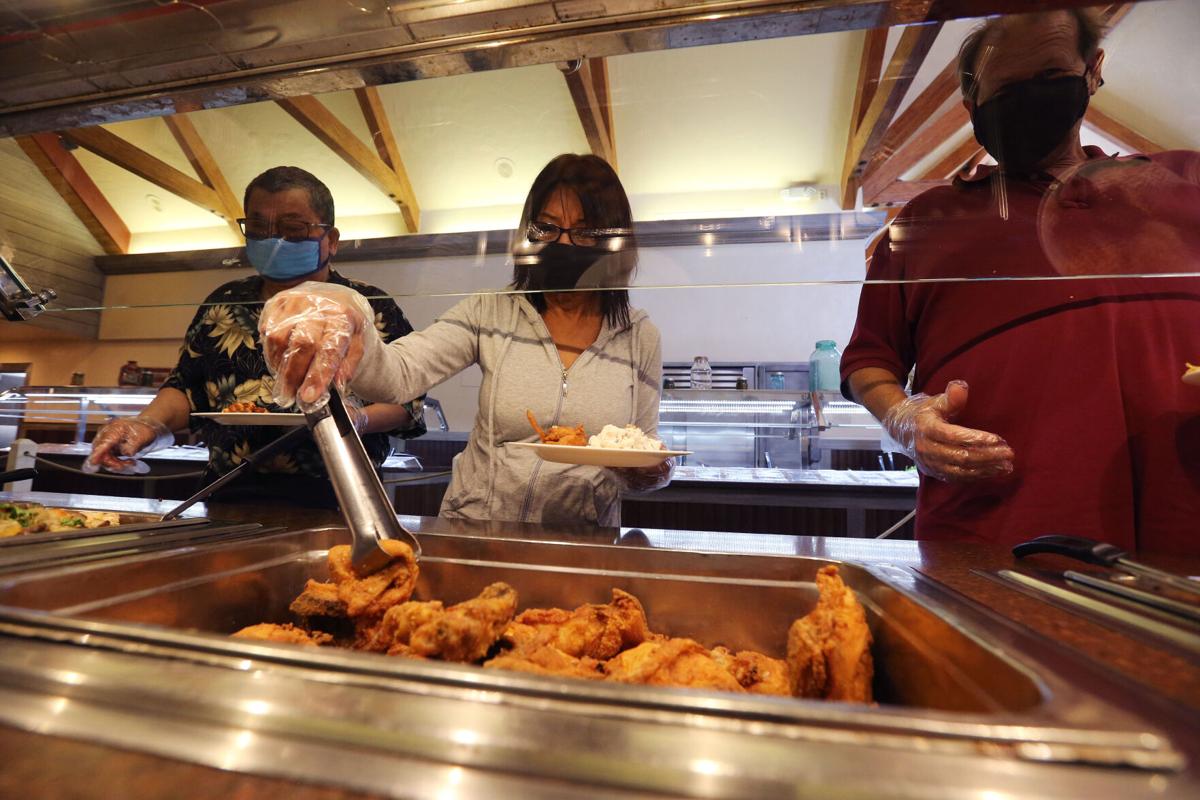 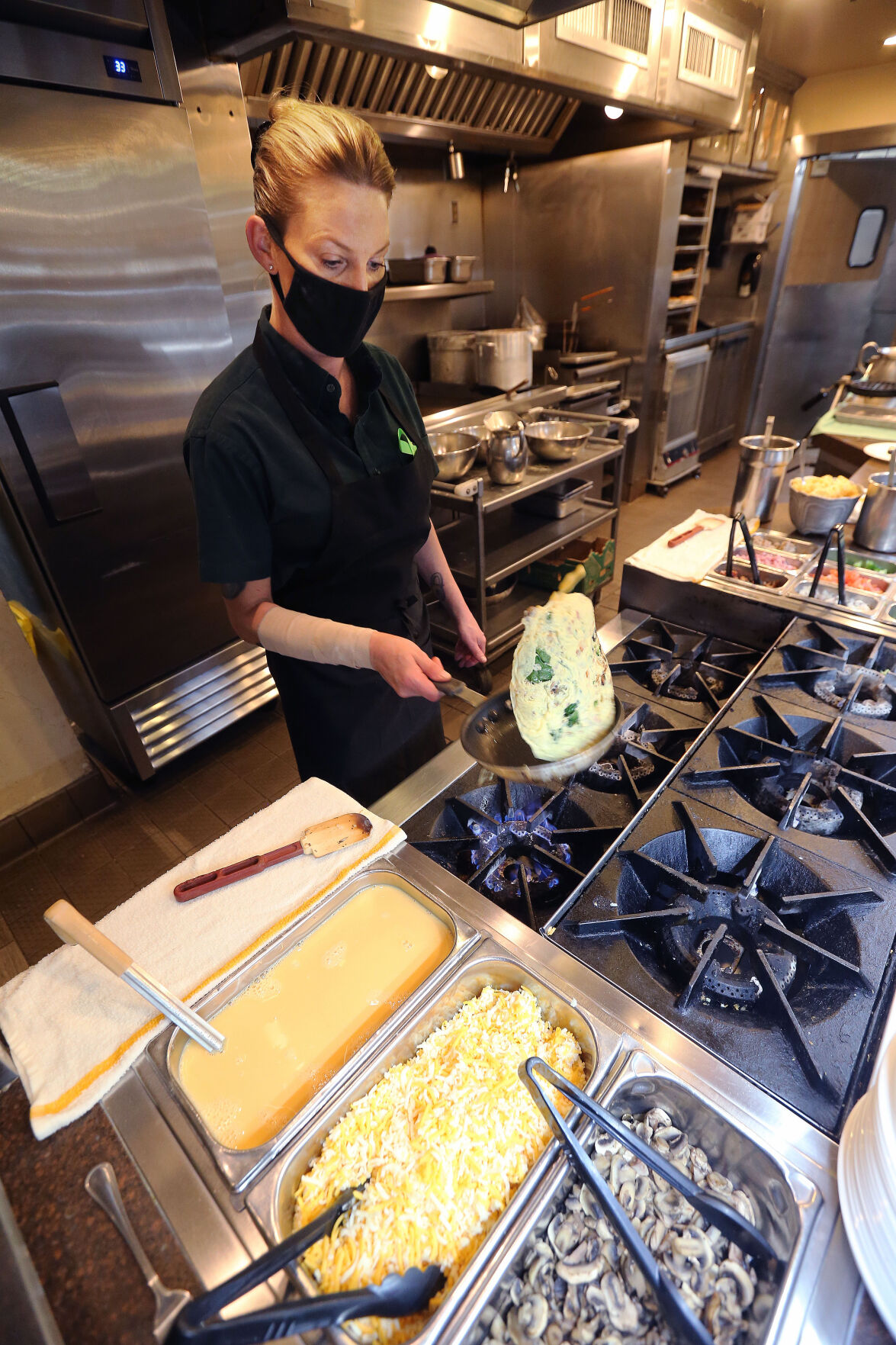 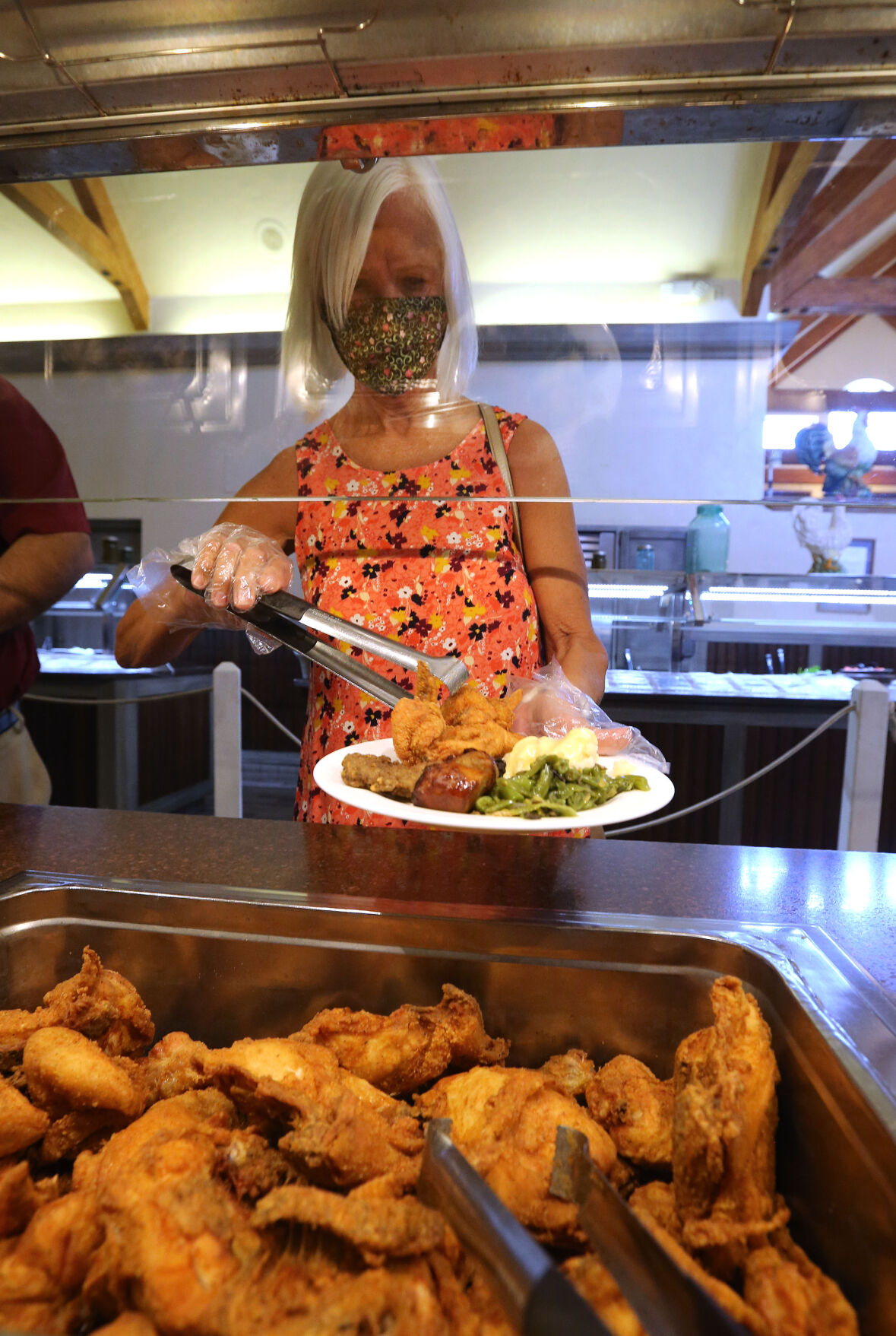 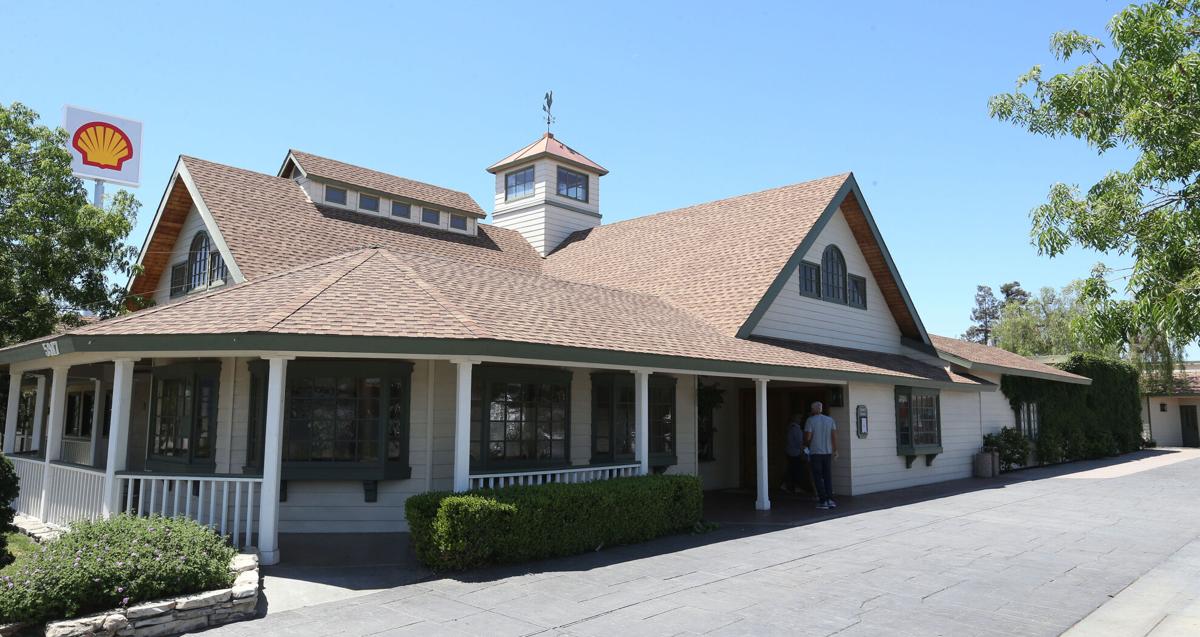 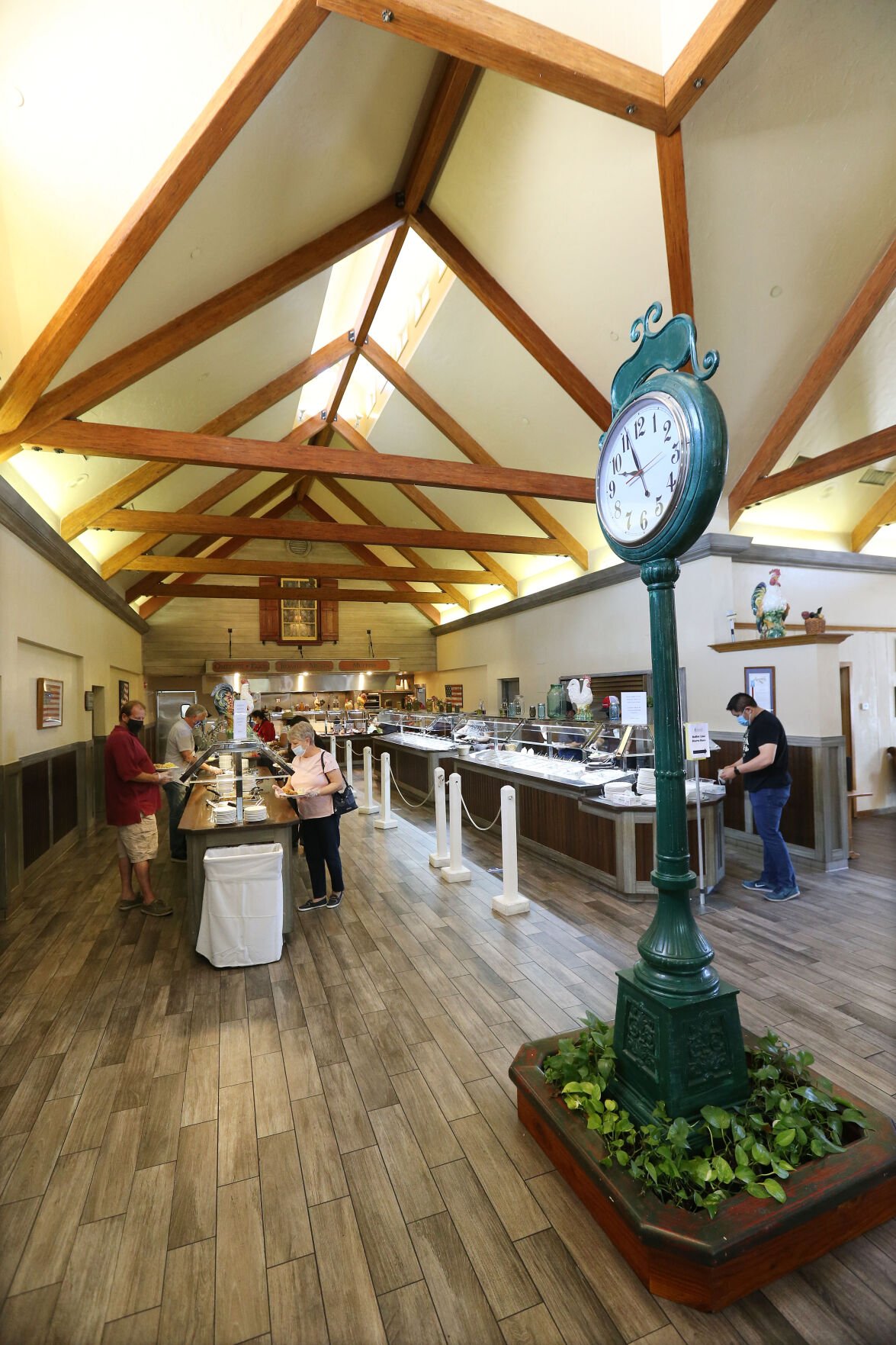 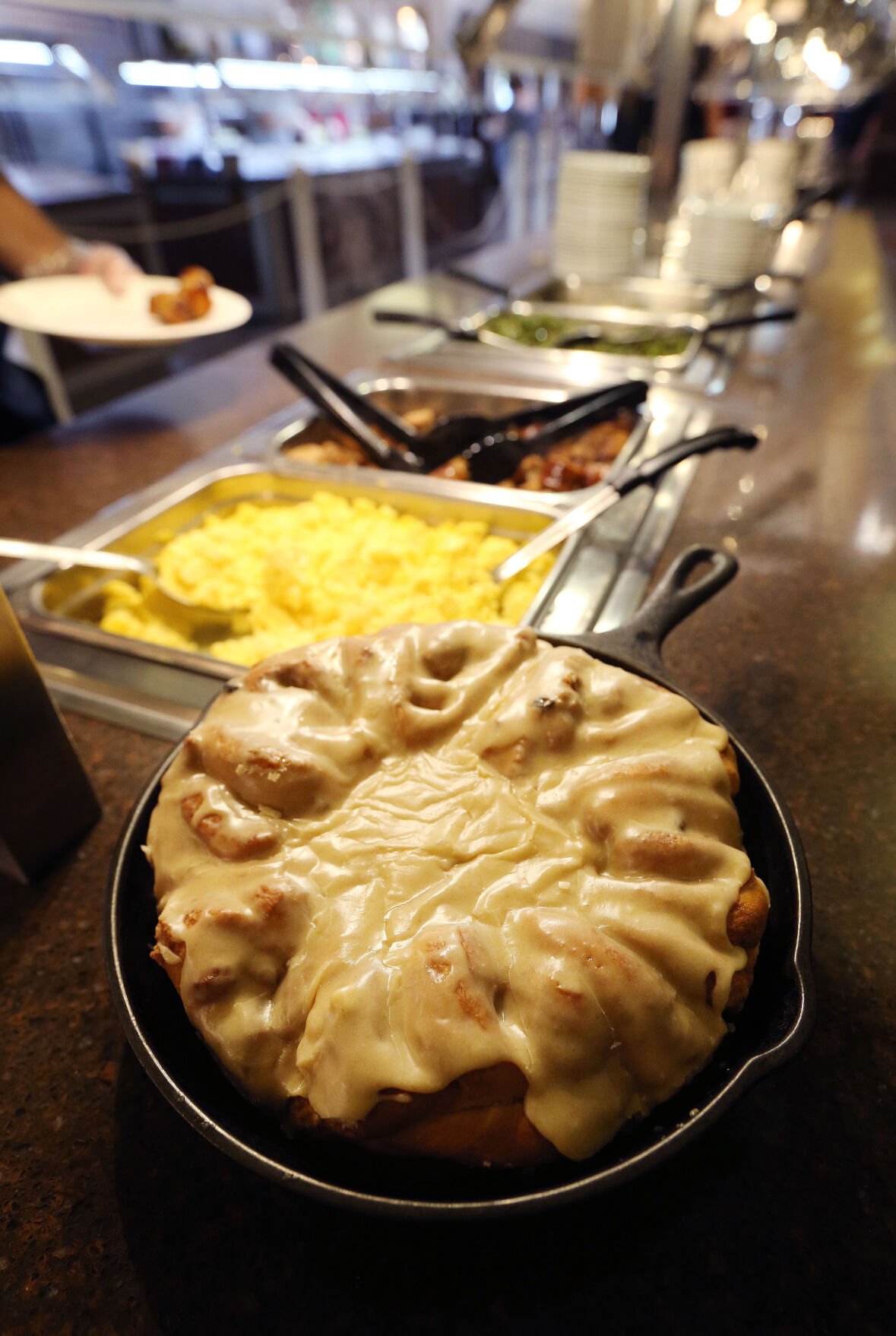 A few things have changed at Hodel's Country Dining but you can always count on the cinnamon rolls. 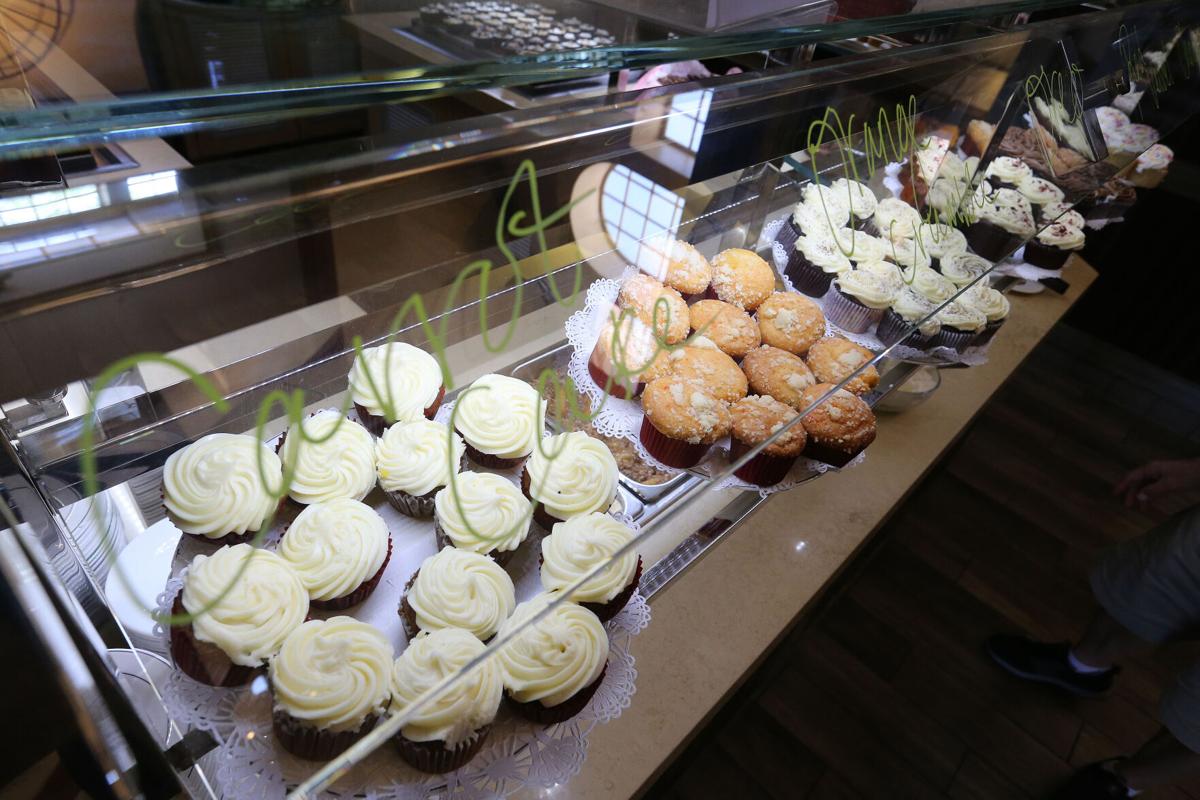 Satisfy your sweet tooth with an array of cupcakes at Hodel's Country Dining. 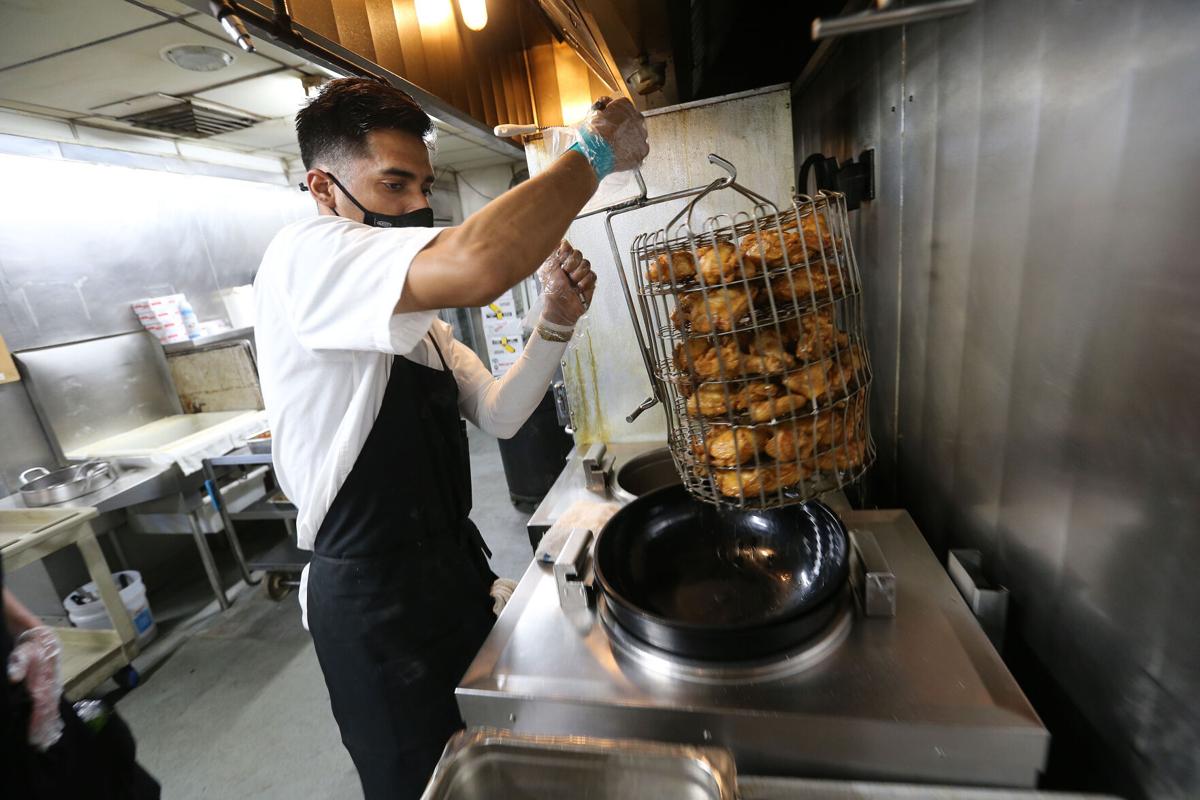 Get it while it's hot! Eduardo Madrigal pulls chicken out of the fryer at Hodel's Country Dining 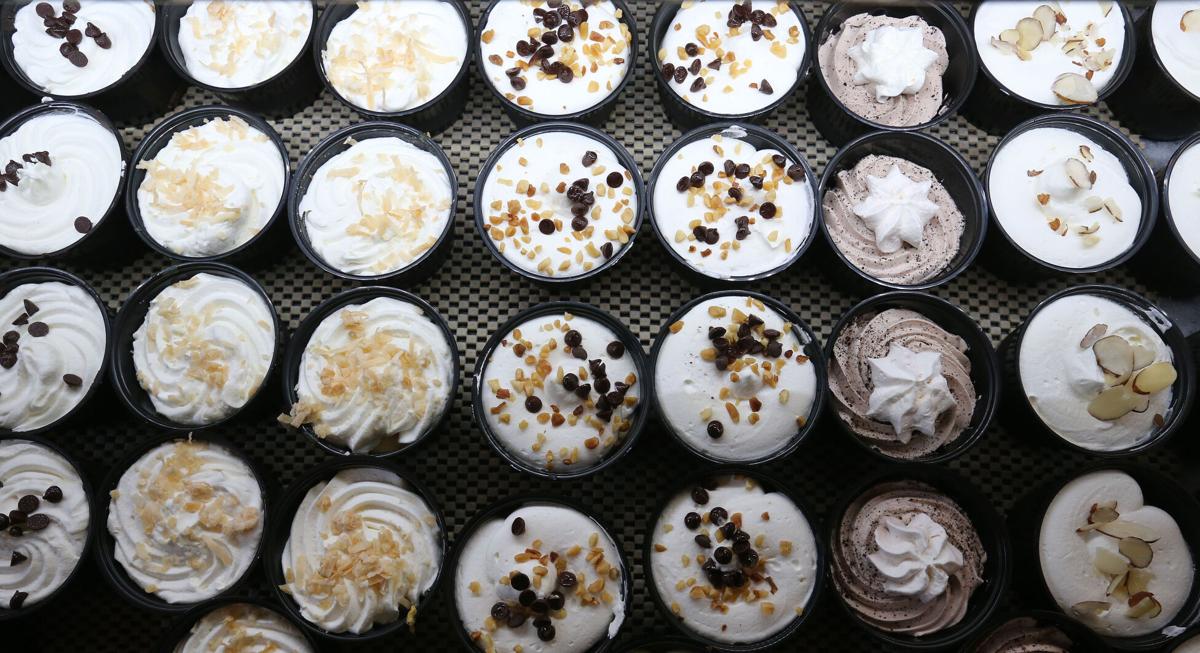 A variety of single-serve desserts are on the buffet line at Hodel's Country Dining. 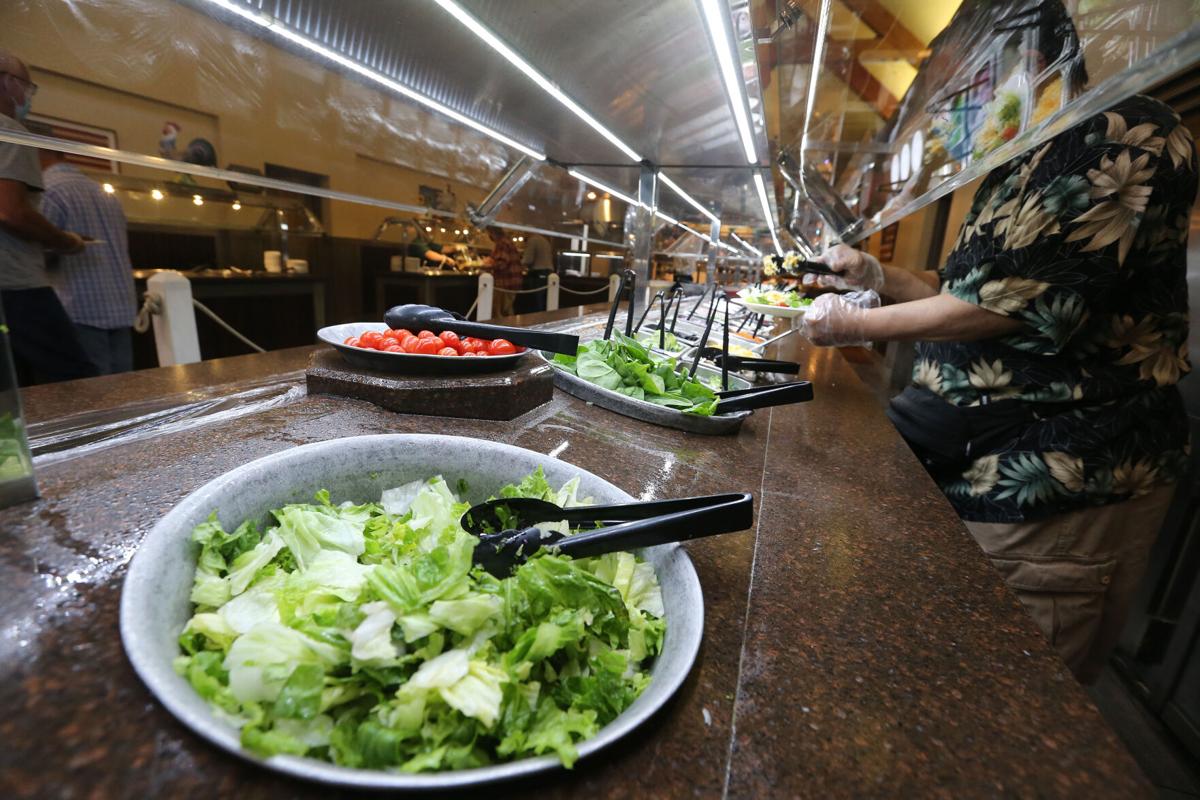 Don't forget your veggies. The salad bar at Hodel's Country Dining has fresh greens and vegetables. 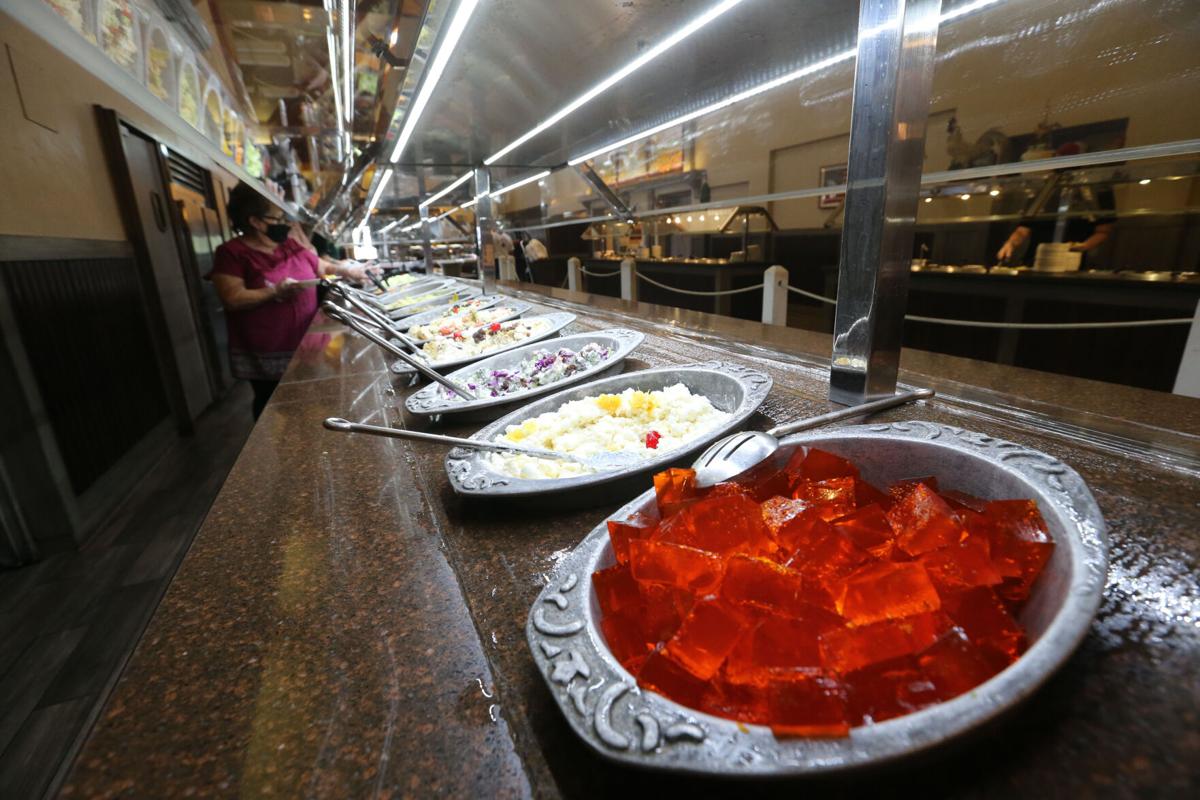 There's always room for Jell-O, which is offered along with other side salads at Hodel's Country Dining. 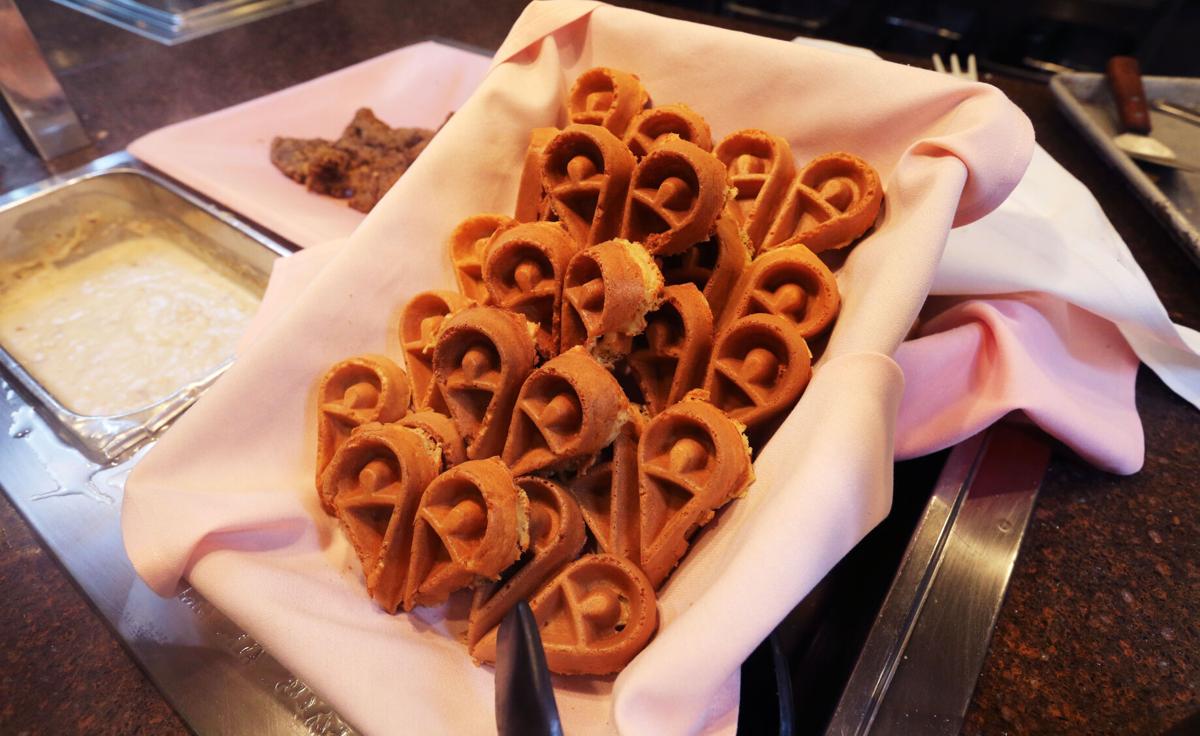 If you love waffles, Hodel's Country Dining has a treat for you. 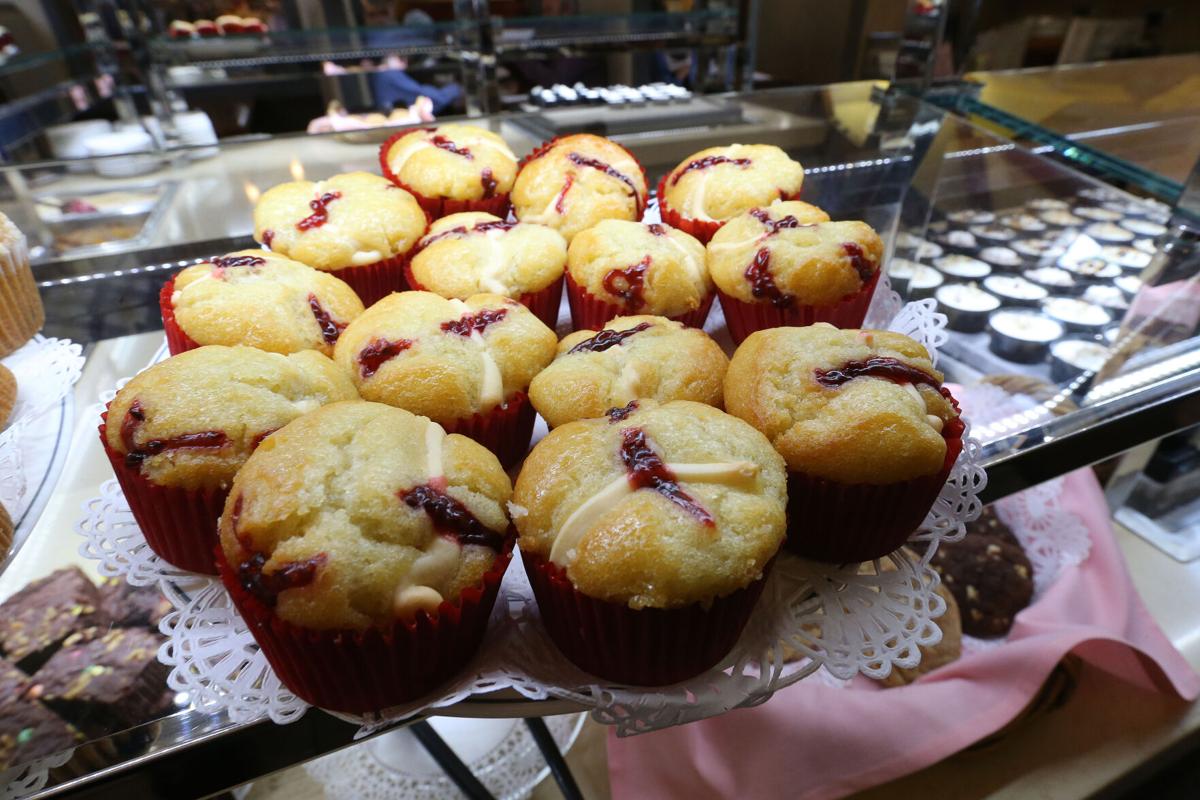 Fresh raspberry cupcakes are one of the sweet treats available at Hodel's Country Dining.

A few things have changed at Hodel's Country Dining but you can always count on the cinnamon rolls.

Satisfy your sweet tooth with an array of cupcakes at Hodel's Country Dining.

Get it while it's hot! Eduardo Madrigal pulls chicken out of the fryer at Hodel's Country Dining

A variety of single-serve desserts are on the buffet line at Hodel's Country Dining.

Don't forget your veggies. The salad bar at Hodel's Country Dining has fresh greens and vegetables.

There's always room for Jell-O, which is offered along with other side salads at Hodel's Country Dining.

If you love waffles, Hodel's Country Dining has a treat for you.

Fresh raspberry cupcakes are one of the sweet treats available at Hodel's Country Dining.

I’m often telling people here that they need to appreciate the interesting, locally owned restaurants we’re blessed with in Bakersfield, as those who leave town do miss our especially great Mexican restaurants and flourishing barbecue scene.

A reader asked me when J’s Place on Rosedale Highway was going to reopen because her husband said the fried catfish served there has no peer in our city. I couldn’t provide an answer, but they know how the quality of life is diminished when such places are no longer open. It may be months before restaurant life here gets back to normal.

After the pandemic it’s important to support these restaurants, especially after they go through near death experiences like Hodel’s Country Dining.

You may remember late last year during the worst of it that Hodel’s closed and there were news stories suggesting that the family was considering shutting the place down permanently. This gem was opened by Bob Hodel when he bought The Crockery Cookery Coffee Shop on Knudsen Drive back in 1967. Over the years, it's gone through many remodels but quality has never slipped. You can hardly blame them after going through generations of family keeping the place going, and it takes a lot of energy to keep a restaurant working well, the big reason we lost the Noriega Hotel last year. But Hodel’s? Really?

I thought of a social media post from an ex-Bakersfield resident who moved to Arizona talking about how Hodel’s was a place he always loved stopping at because the quality was unparalleled for a buffet restaurant. He complained that most buffets he has visited put the food out early in the morning, let it dry out, and don’t really care about quality. Hodel’s is a rare jewel, and when I last wrote about the place in 2017, I agreed.

My companion is not a fan of buffet restaurants for the very reasons listed by Mr. Social Media, but every time I take her to Hodel’s she marvels at the quality of the meal, and I’m not just talking about the famous barbecue night on Fridays (seems like some people go there every week — a great way to get ready for the weekend, I tell you). On the way out, she can’t wait to get back in the future.

The great news is that the place has reopened with lots of appropriate safeguards to keep us healthy (we will get to those) and the food quality is the same as it ever was, and a value to boot. Admittedly the hours are reduced — opening later in the morning, closing at 7 instead of 9 at night — but maybe if enough people patronize the place the family will finally commit to keep people happy for a few more decades.

We went for breakfast and it was every bit as good as the last time we visited before the closure. There are rules, such as always wearing a mask when not eating and using the disposable plastic gloves they provide when going through the buffet line.

Children must be accompanied by parents, and those of us who have seen some crazy sights at Golden Corral are grateful for that. A small sacrifice to be sure.

The famous cinnamon rolls are there, as well as the omelet station, those amazingly crisp but high-quality waffles and the fresh fruit bar.

As I said, what makes the place so distinctive is the emphasis on quality. All of us have dug scrambled eggs out of a bin, often at a hotel buffet, and they’re usually dry and lifeless. Not here. The eggs, probably because they seemed to be presented in a small tin that leads to more frequent replacement, were fluffy and light, not watery or hard.

The bacon next to it is crisp, thick and so smoky. No wonder some man standing in front of me in the omelet line had to have at least 10 ounces of it piled on his plate. I tried one and even my companion was astonished at the quality. Matching that were the chunks of grilled pork sausage, with skins on. These were legions away from the small, tired Farmer John links that most places trot out.

And that’s not all. The omelet bar is always great with a dozen different ingredient options, lots of veggies including broccoli, mushrooms, olives and jalapeños. It’s actually a scramble filled with cheese if you wish, and the young man working the station was keeping people lined up after ordering and he was so cordial throughout the process, even thinking that he overcooked mine. No, it was perfect.

Of course, those famous cinnamon rolls, which I prefer to what seems to be everyone else’s favorite (Old West), are still available, and you can get a pan of them to go near the cash register. The eight different cupcakes, a feature added some time ago, are stunning, particularly the strawberry cream cheese one we sampled. There were some streaks of white and strawberry preserves visible near the top, but the cake itself was so rich that I suspect the creaminess of the cheese was extended throughout the batter. And the peach cobbler is always great, as is the bread pudding, but how much sweets can one human eat?

The only remotely negative thing I can come up with is that coffee is $2.95 extra, but at a bit over $12 for a spread like this, I was in no mood to complain.

Hodel’s Country Dining can be recommended for a fine dining experience. Go there before you move away and miss it forever.

Amenities: No alcohol served; some vegetarian options; family-friendly; no delivery