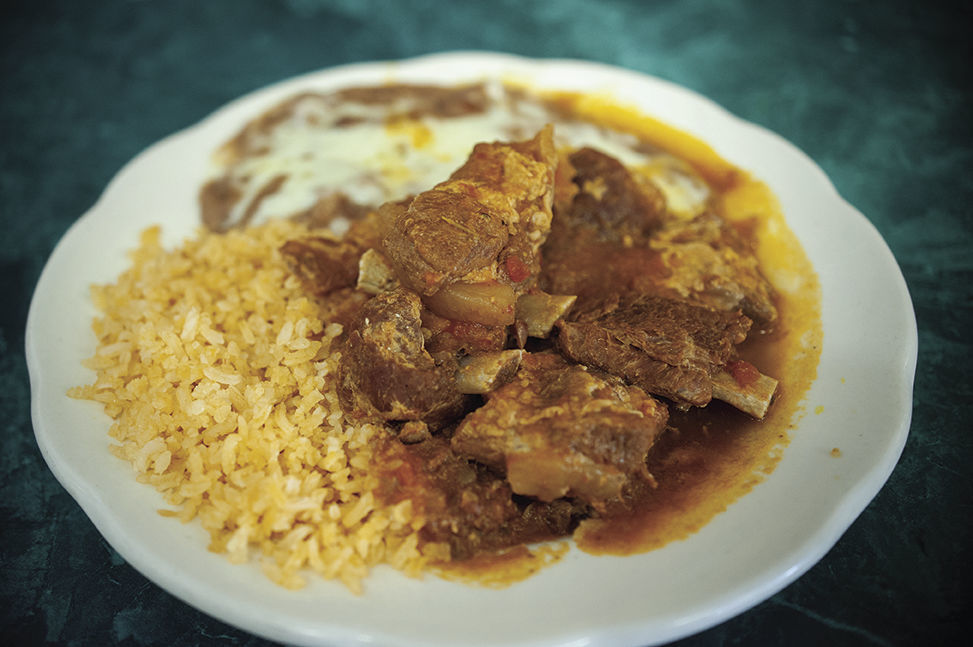 The chile verde at Arizona Cafe is a favorite of dining columnist Pete Tittl. 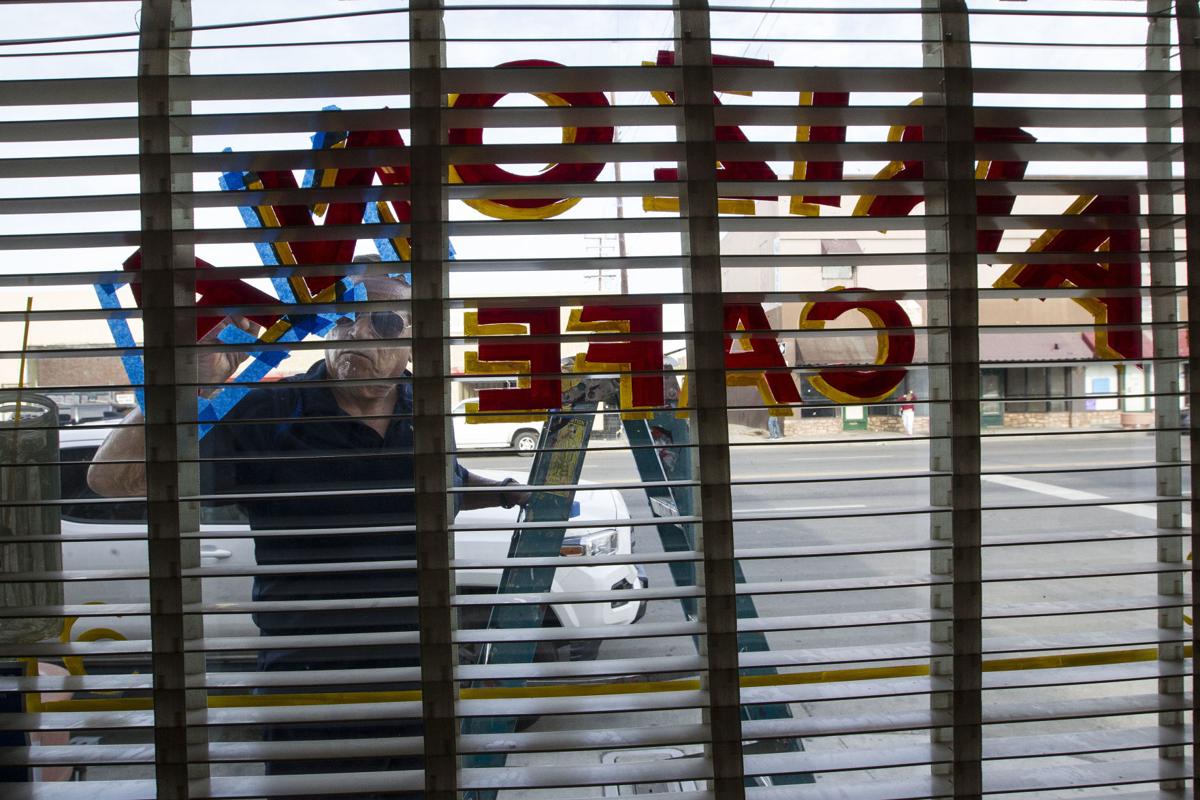 Graphic artist Richard Rodriguez touches up the lettering on the Baker Street-side window of the Arizona Cafe, a popular Mexican restaurant that opened in Old Town Kern in 1953. Owner Jose Ramirez, who started working at the cafe in 1973, as a 16-year-old dishwasher, bought the restaurant in 1998; he now runs it with son Oscar, 28. 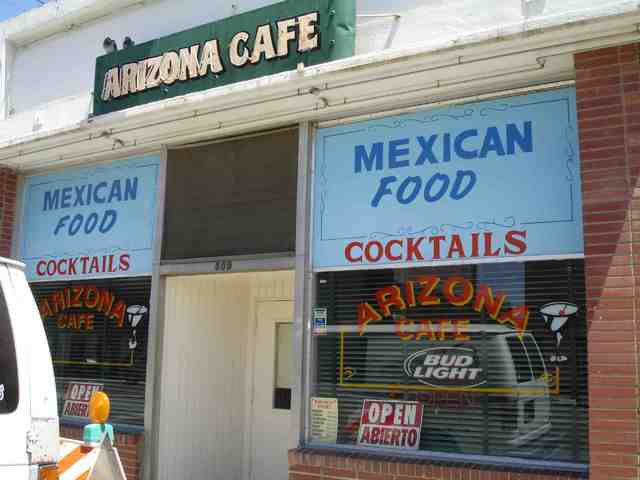 Arizona Cafe has been a vital part of Old Town Kern since opening in 1953.

The chile verde at Arizona Cafe is a favorite of dining columnist Pete Tittl.

Graphic artist Richard Rodriguez touches up the lettering on the Baker Street-side window of the Arizona Cafe, a popular Mexican restaurant that opened in Old Town Kern in 1953. Owner Jose Ramirez, who started working at the cafe in 1973, as a 16-year-old dishwasher, bought the restaurant in 1998; he now runs it with son Oscar, 28.

Arizona Cafe has been a vital part of Old Town Kern since opening in 1953.

Editor's note: Arizona Cafe was reviewed before restrictions were put in place to prevent the spread of the coronavirus. The restaurant is closed at this time.

I, like most of this city, am mourning the loss of the Noriega Hotel.

After the obit ran on Saturday, we had another tribute in Sunday’s paper from Robert Price. I am not sure I can add much to those except to say it was one of those places you had to take out-of-town visitors, particularly for dinner and especially if they weren’t familiar with Basque culture, which I wasn’t before moving here in 1980 from Wisconsin. I will say that this is one of the first restaurants I took my parents to when they visited Bakersfield and my dad loved it almost as much as the Mexican food at then-nearby Red Pepper.

You have no idea how appealing the Mexican restaurants of Bakersfield are to someone from the Midwest at a time where there was no decent Mexican food north of Chicago. But, as a former restaurateur, he loved watching how the kitchen worked, how people could sit at a communal table and the food just kept on coming, and when the food keeps coming like that it seems like a family meal at a holiday and you can get sentimental, glad you’re alive, glad to share laughs and enjoy good food. I observed the work the staff put into it, and it didn’t surprise me that Jonathan Gold, that great L.A. Times food critic, found it an amazing experience. And before our COVID-19 crisis hit, you had trendy restaurants like The Lark in Santa Barbara offering communal table dining experiences, though most lack the familial touch of passing around the food.

My prayer is that someday this will pass, and we can go back to that once social distancing can become a quaint relic of another era. And it was hard for me to believe that the last time I wrote a full column about the Noriega Hotel was back in 2012. The years do fly by.

I bring up the Noriega because we had visited a neighbor that is just as reliable, just as old school, just as long in the tooth and hopefully not near expiring: the Arizona Cafe in Old Town Kern, which opened in 1953 and wears its age proudly. When I moved to Bakersfield and was working my way through trying all the Mexican restaurants, people used to say, “You have to go to the Arizona Cafe!” I heard it so often that I think they oversold the place and when I visited to write about it, I was expecting something along the lines of its then-neighbor Red Pepper and was disappointed.

Of course, the cafe got past that and over the years I came to appreciate its distinct charms. It’s never had the innovative verve of Gilbert Sabedra’s kitchen, but like the Noriega Hotel or Luigi’s it can be the touchstone for so many happy memories. For some reason going there on a Saturday with friends or family members and getting the chile verde with fresh tortillas and taking a couple of hours to linger over it all, perhaps with a cerveza, was a heckuva relaxing way to start a weekend. And to me the real reason the chile verde tastes so good is that they leave the bones in the stew and everyone knows meats cooked with bones just taste better. Try it yourself at home sometime with something as innocuous as chicken breasts, or maybe a steak. I don’t know the chemical reasons why, though I can take a guess, but the difference is noticeable.

But it’s important to avoid ruts and one of the best menu items in this old-school place is carne guisada ($12), which I ordered on this visit, while my companion was bent on getting a combination dinner, choosing the two burritos plate, one colorado and one verde ($14), with a taco ($2.75) a la carte on the side.

Let me just say that the beef steak selection I ordered has all the charm, taste and old school Mexican homemade appeal of that chile verde that I’ve been eating for decades. To start, the steak chunks are both tender and flavorful and the presence in the brown sauce of pieces of onions and jalapeno make it a perfect filling for some of those fresh-made tortillas. Where has this been all my life? It’s like fancied-up carne asada, and the best thing is that on the small specialties section of the menu you can order half chile verde, half carne guisada ($14.50), the perfect choice for the indecisive who’ve tried and loved both.

And their colorado is red, husky and perfect in my companion’s burrito, though I’ve never thought it could stand up to its green cousin. It’s respectable, that’s for sure, and the taco with its fresh shell and shredded beef was also good. I have trouble deciding between the refried beans (not the tasteless low-fat version you get in some restaurants) and the whole beans. Both great. And I can’t stop talking about the food without mentioning the great breakfast choices such as the huevos rancheros and chilaquiles, both with their trademark chile verde. Machaca is also good and if you’re a fan of chorizo they have a menu item that mixes the sausage with eggs and potatoes that is really good. Some might find the menu to be small — not a lot of variety — but I think they concentrate on what they do well.

The interior has beer mirrors, lots of wall decorations, a bar that looks original and overall it seems like it’d look great for a key scene in a movie, perhaps a confrontation between the hero and some usurper, maybe a guy who’s irked that Noriega isn’t open and he’s ready to demand answers. Full bar service, but no draft beer, only bottles, and all the usual south-of-the-border suspects are there.

When restaurants are allowed to be open and serving us all again, please keep Arizona Cafe in mind. You will have a new appreciation for it. For a time after the state limited restaurants to takeout only, the cafe was offering food to go, but has since stopped that. Let’s hope they revive it soon.

Arizona Cafe can be recommended for a fine dining experience.

Robert also mentioned Los Reyes. Quite the one woman show, in the me too movement.