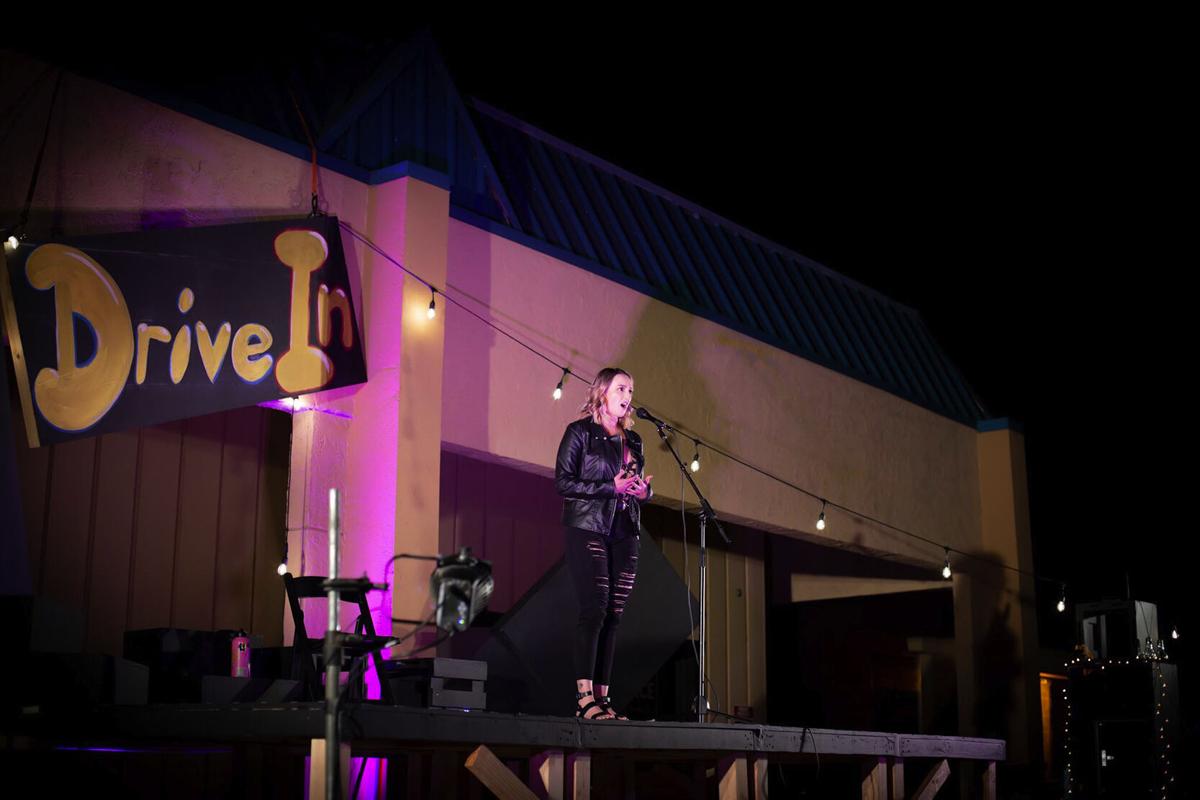 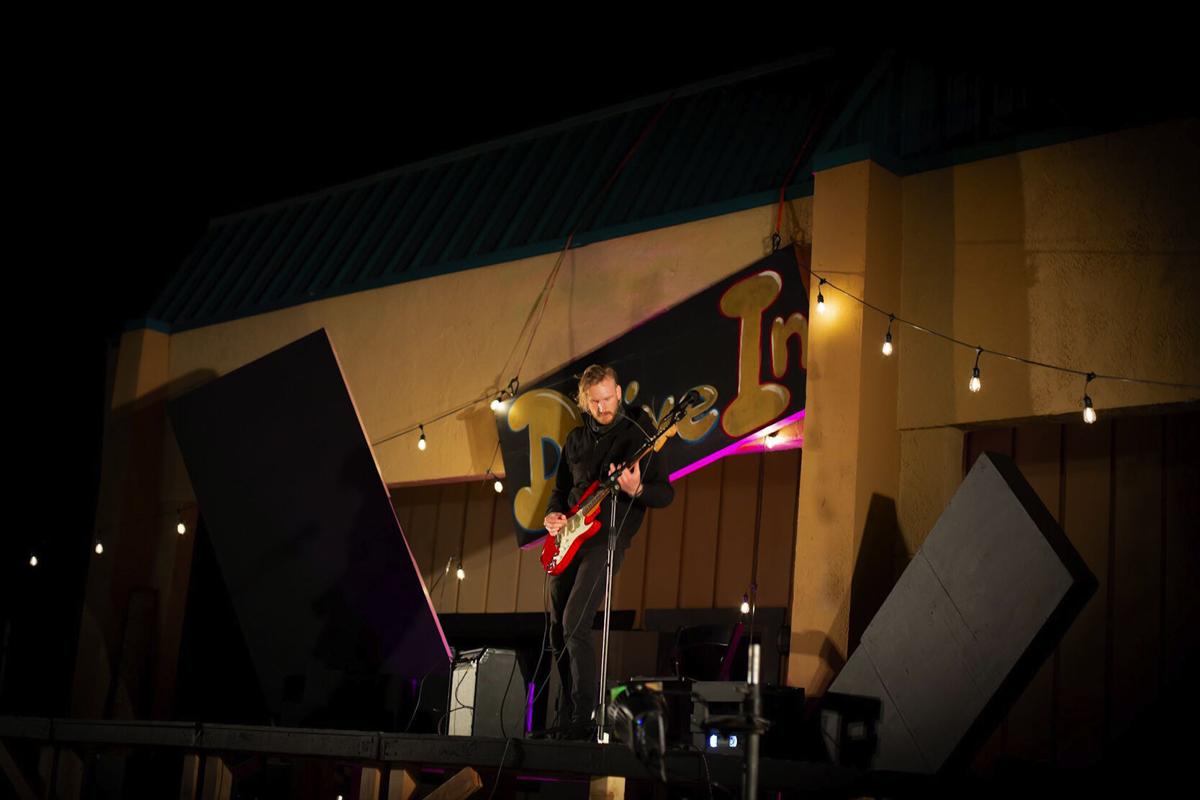 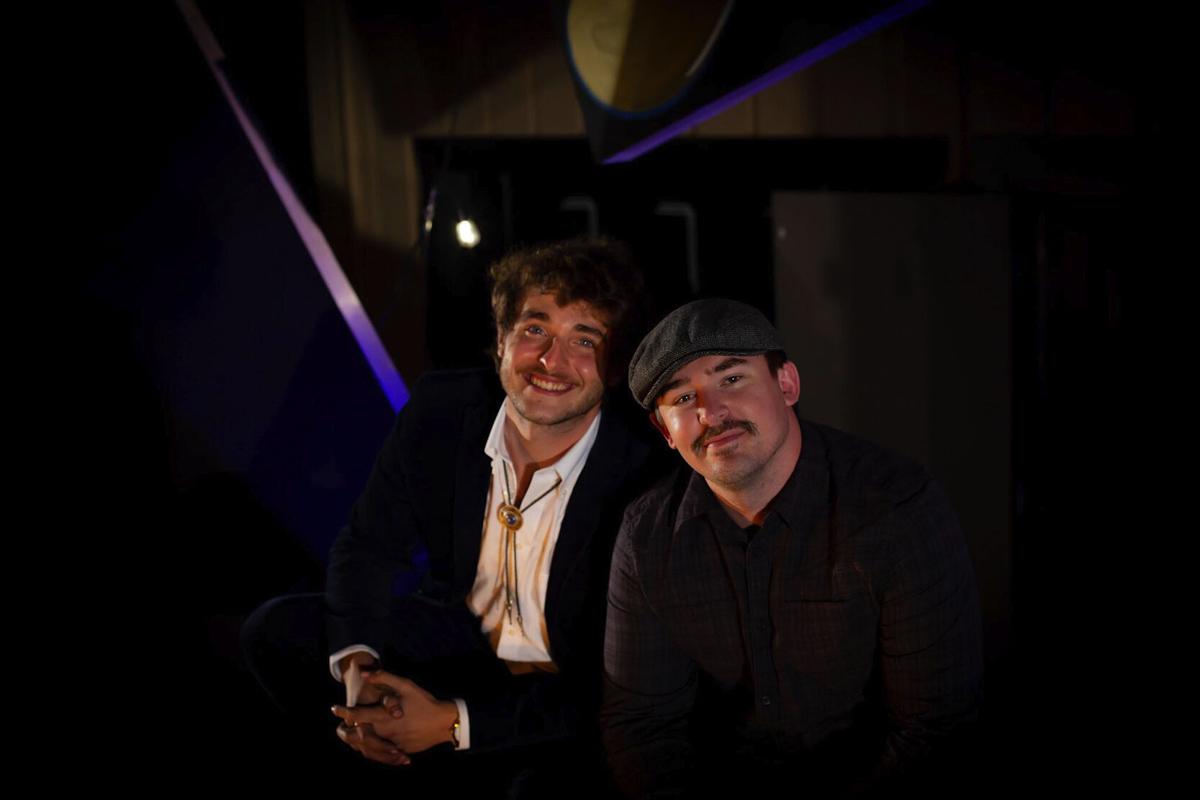 Trenton Benet, left, and Brian Purcell are the organizers of Drive-in Live! at The Empty Space, which returns for a second outdoor performance on Saturday. 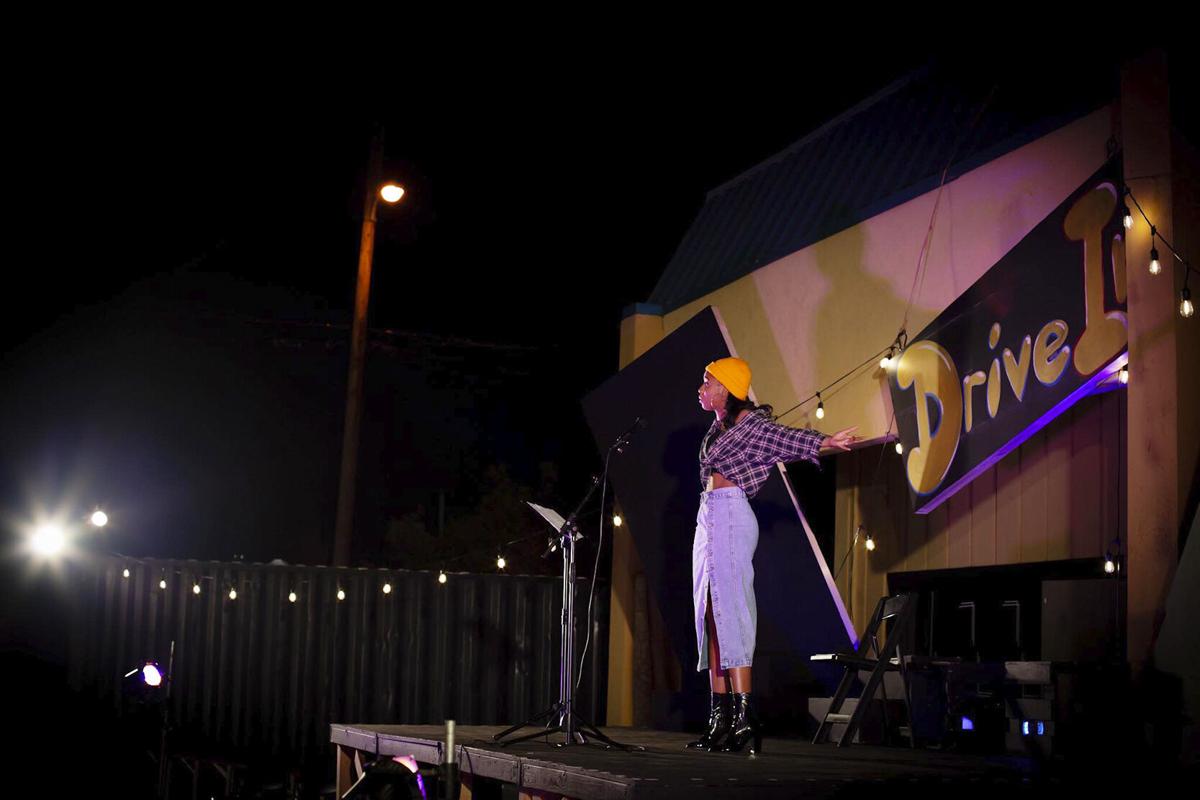 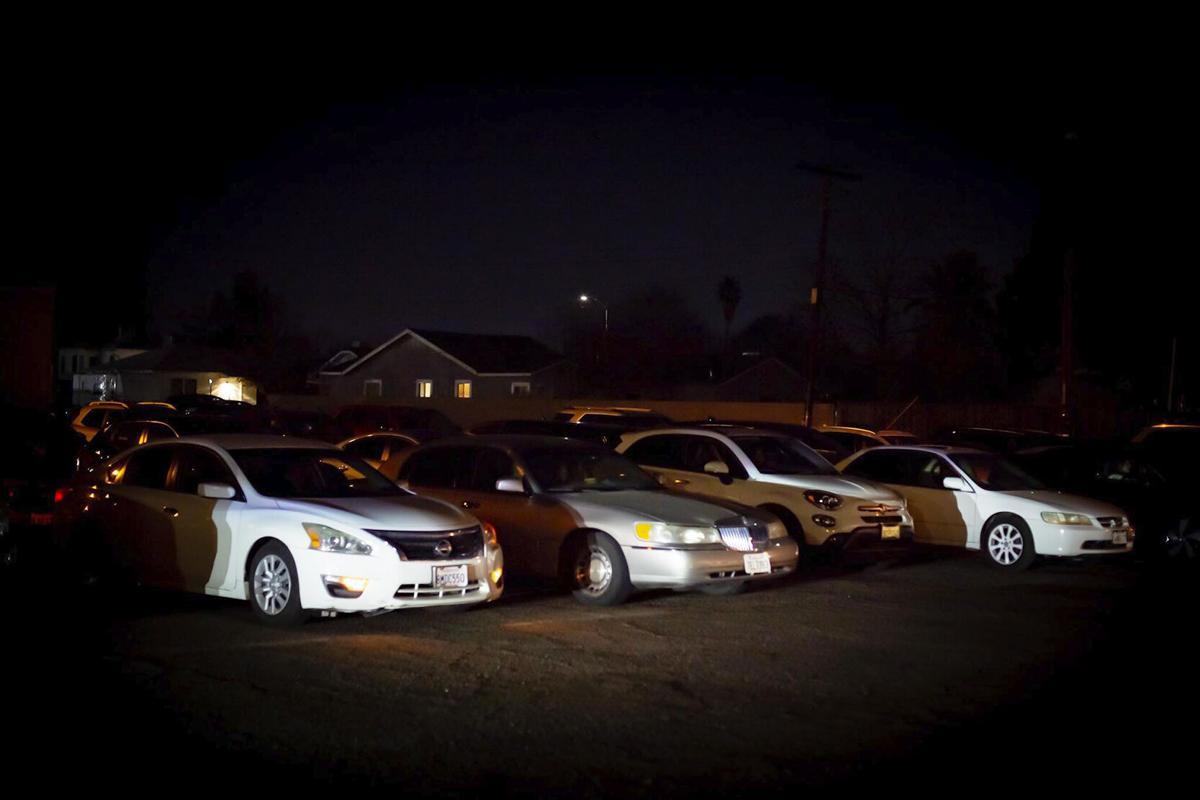 Cars fill the parking lot outside The Empty Space theater to watch the Drive-in Live! event in February. The outdoor performance returns on Saturday.

Trenton Benet, left, and Brian Purcell are the organizers of Drive-in Live! at The Empty Space, which returns for a second outdoor performance on Saturday.

Cars fill the parking lot outside The Empty Space theater to watch the Drive-in Live! event in February. The outdoor performance returns on Saturday.

Good news for local theaters fans: The show is going on. Most of the community theaters have announced their plans for their latest seasons on the stage.

For The Empty Space, it starts with a return to a winning formula. After its successful Drive-in Live! in February, coordinators Brian Purcell and Trenton Benet started planning a sequel.

On Saturday night, the Oak Street theater will again bring its stage outside, setting up for an audience inside their own vehicles for Drive-in Live 2!

"Because of the nature of the pandemic, performer lineup is subject to change — and indeed it already has," Purcell wrote in an email. "We want the event to be a fun and engaging environment for our performing community. To achieve this it is important to not add any additional obligation or stress if performers need to cancel, for any reason, during these difficult times."

What is guaranteed is an evening of story-telling in a variety of forms including poetry, live music and monologues. Purcell said each performer will have 10 minutes to tell whatever story they wish on the 16-by-9-foot stage.

Purcell said the response to the first drive-in was spectacular: "We had around 32 cars fill in to support our performers. Everyone was enthusiastic with tons of cheering and lots of flashing high-beams!"

He anticipates accommodating about 30 cars for Saturday's show. Viewers can tune in with their car radio or use a portable AM/FM radio.

Admission is pay what you can but attendees are urged to consider factoring how many people are in the vehicle when determining what they contribute.

Tickets must be purchased in advance at esonline.org. Concessions — popcorn, baked goods, sodas and candy — will be available the night of the show.

While the theater may have more up its sleeves this summer, it is also gearing up for its new season, which kicks off in September. The four recently announced shows includes dramas and comedies including a Bakersfield premiere.

The fun kicks off Sept. 3 with "The Full Monty," based on the 1997 British film of the same name. In this Americanized musical stage version, six unemployed Buffalo steelworkers who, after seeing their wives' enthusiasm for a touring company of Chippendales, decide to present a strip act at a local club to bolster their bank accounts and self-esteem.

Kristina Saldaña and Jeremiah Heitman will direct the show, which will feature vocal direction by Jill Burdick and choreography by Jennifer Skiby Plunkett. A reminder for auditioning actors and future audiences: The show will feature brief nudity of its lead performers.

James Kopp, "friend of The Empty Space" and author of "Geeks vs. Zombies," will premiere his "Girls Kills Nazis" in Bakersfield on Oct. 15. The dark comedy, being directed by David Rock, is set in a not-so-distant future in which the Nazi party is in control of the United States. A book club in the small town of Bisbee, Ariz., is doing more than reading and talking about books: These women are taking fate into their own hands.

The musical "Big Fish" will debut Nov. 19, depicting the larger-than-life adventures of Edward Bloom, a traveling salesman whose seemingly tall tales thrill everyone around him except his son, Will, who is about to have a child of his own. Abby Bowles-Votaw will direct, with vocal direction by Caley Mayhill and choreography by Jordan Payne.

After an opening that will likely be filled by a holiday show, the theater will be back with "The Light in the Piazza" on Jan. 21.

The drama, being directed by Sheila McClure with vocal direction by Michael Crider, is based on a 1960 novella by Elizabeth Spencer. Margaret Johnson, a wealthy Southern woman, and her daughter, Clara, who is developmentally disabled due to a childhood accident, spend a summer together in Italy. When Clara falls in love, her mother begins to question her daughter's future and her own life as well.

Meanwhile, over at Ovation Theatre, the curtain is rising after more than a year. Unlike its peers, the 19th Street theater remained dark with no virtual or outdoor performances after closing last March.

With news that the state was expected to reopen most of the economy by June, artistic director Hal Friedman and the rest of the Ovation team started brainstorming.

While considering sticking with the planned season that had been delayed, the decision was made to adjust to current times and hold off on shows like "Shakespeare in Love," which would require a cast of 25 and a large wardrobe budget.

Ovation will open its new season June 18 with a very recognizable musical for theater fans: "Rent."

"I applied for 'Rent' every year. It's one of those shows you just don't get ever," Friedman said. "I've been involved with it twice, once at Spotlight," referring to the previous theater located where Ovation is now.

The 1990s rock musical, loosely based on Puccini's 1896 opera "La Bohème," centers on a group of struggling young artists in New York City's East Village while living and loving under the shadow of HIV.

While some may have thought the show was dated, Friedman said its relevance has actually increased as we live in a pandemic with "a disease that we can't stop, things that are out of our control."

"I wanted to open with something that people would hopefully come see," he said. "People love this show and they will come see it."

Although run dates have not been finalized, the rest of the season includes: "Buddy: The Buddy Holly Story," a jukebox musical about the famed 1950s rock 'n' roll musician who died tragically in a 1959 plane crash that also claimed fellow rockers "Big Bopper" J.P. Richardson and Ritchie Valens; "The Sound of Music," the beloved musical about the von Trapp family living in Austria before World War II; twisted fairy-tale musical "Into the Woods"; "Clue: On Stage," adapted from the 1985 cult classic based on the popular board game; and the local premieres of "Elf The Musical," romantic musical "Once" and "Something Rotten!" about the Bottom brothers' struggle to compete with William Shakespeare.

For more on the theater, visit theovationtheatre.com.

Like Ovation, Stars Theatre Restaurant based its plans on that June statewide reopening plan. Its upcoming season is packed with well-known musicals and fan favorites.

The season kicks off with "A Grand Night for Singing," a musical revue showcasing songs from Rodgers and Hammerstein (July 16-Aug. 7). Up next is "Spamalot," a musical comedy based on the 1975 film "Monty Python and the Holy Grail" (Aug. 27-Sept. 18). The fall brings "Godspell," a 1971 musical based on the parables from the Gospel of Matthew (Oct. 8-30) and "Wrinkles, the Musical," highlighting the talents of older performers (Nov. 12-21). And departing from a traditional Christmas show, the year ends with "The Little Mermaid," a musical based on the 1989 Disney animated film (Dec 3-19).

Stars Playhouse off of Rosedale Highway also announced its new season. The lineup features "The Servant of Two Masters," a comedy in the style of the Italian commedia dell'arte (July 16-25); "The Shape of Things," a drama from Neil LaBute, which was made into a 2003 film (Sept. 3-12); "My Mañana Comes," about the back-of-house grind of four busboys at an Upper East Side restaurant (Nov. 5-14); and "The Long Christmas Dinner," a play covering 90 years of holiday dinners in a family's home (Dec. 10-19).

For more on Stars, visit bmtstars.com.

Bakersfield Community Theatre will present its One-Act Festival later this year but has not announced its new season, which is expected for the fall. For the latest on BCT, visit facebook.com/bctstage.

And Gaslight Melodrama, which reopened in December for on-stage shows, continues its season with "It All Happened in Haggin Oaks," which opens Friday. The remainder of the season consists of "The Mobfather," following the power struggle after Don Costra Mafioso dies in a horrible orange-eating accident (July 9-Sept. 4); "The Mummy Knows Best," about the Do-Frightly family's effort to stop the Wicked Witch of Westchester (Sept. 17-Nov. 13); and the "Gaslight Holiday Extravaganza" (Nov. 26-Dec. 23).

For tickets and information, visit themelodrama.com.