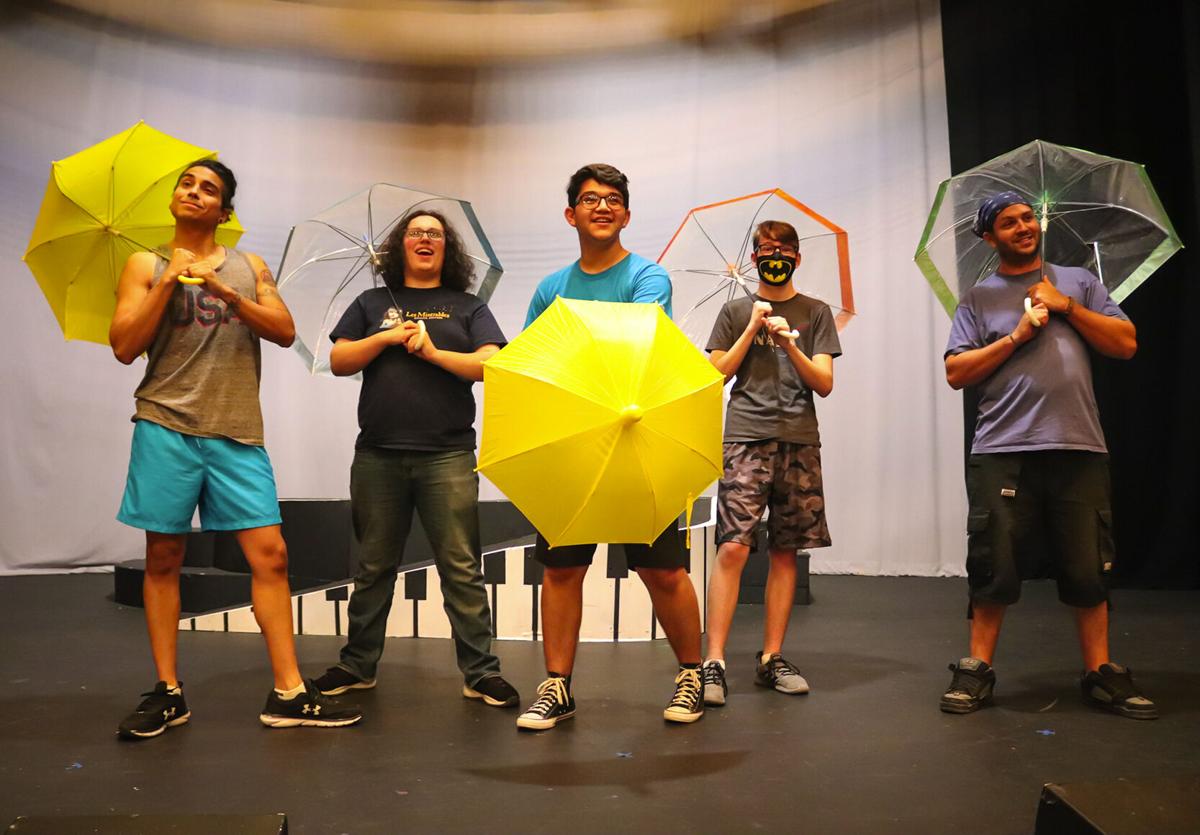 Jesse Magdaleno, center, leads a rehearsal of the musical number "Always Look on the Bright Side of Life" from Monty Python's "Spamalot," which opens Aug. 27 at Stars Theatre Restaurant. From left, Bret McGlew, Marcus Thompson, Magdaleno, Campbell Cleveland and Spirit. 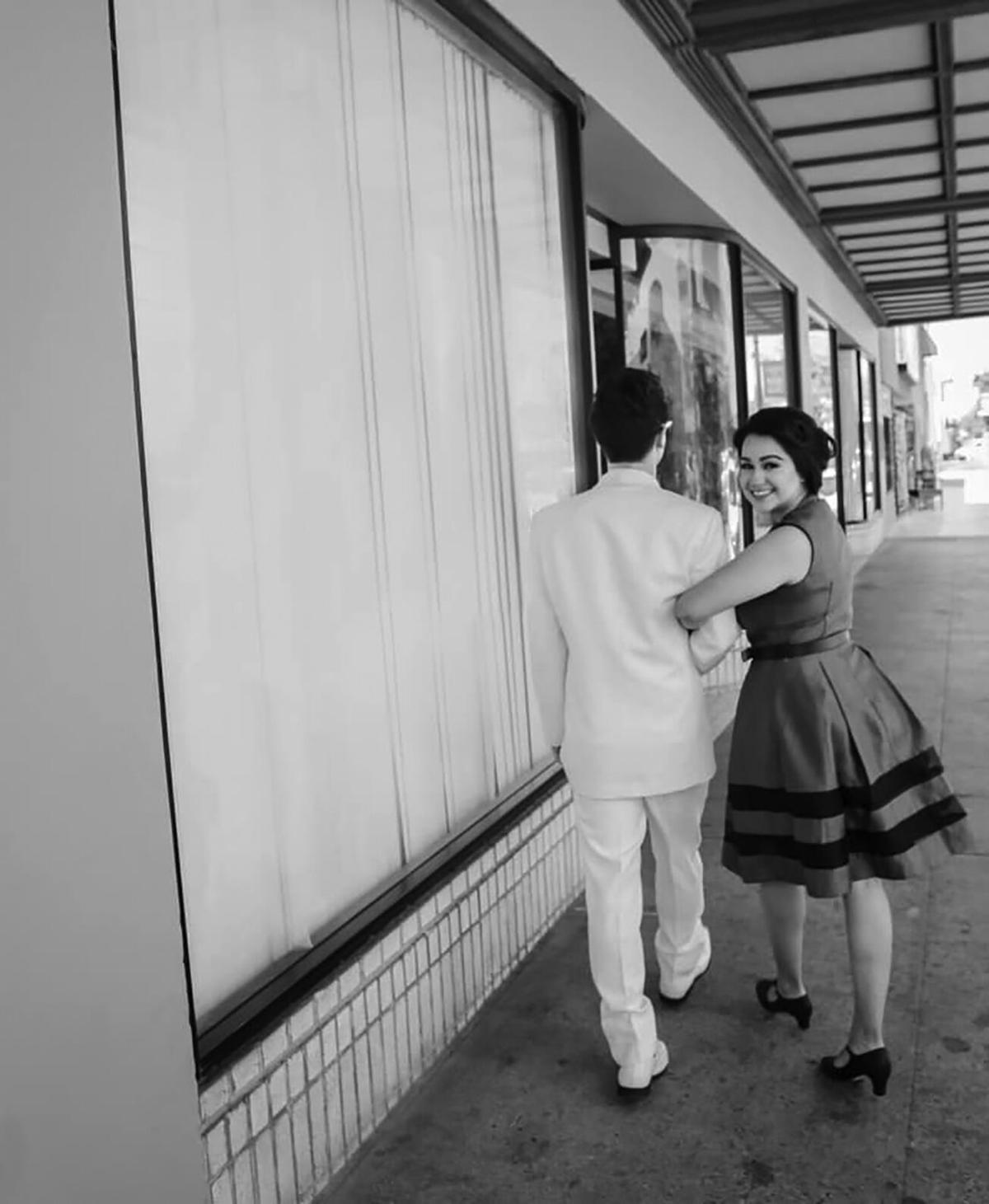 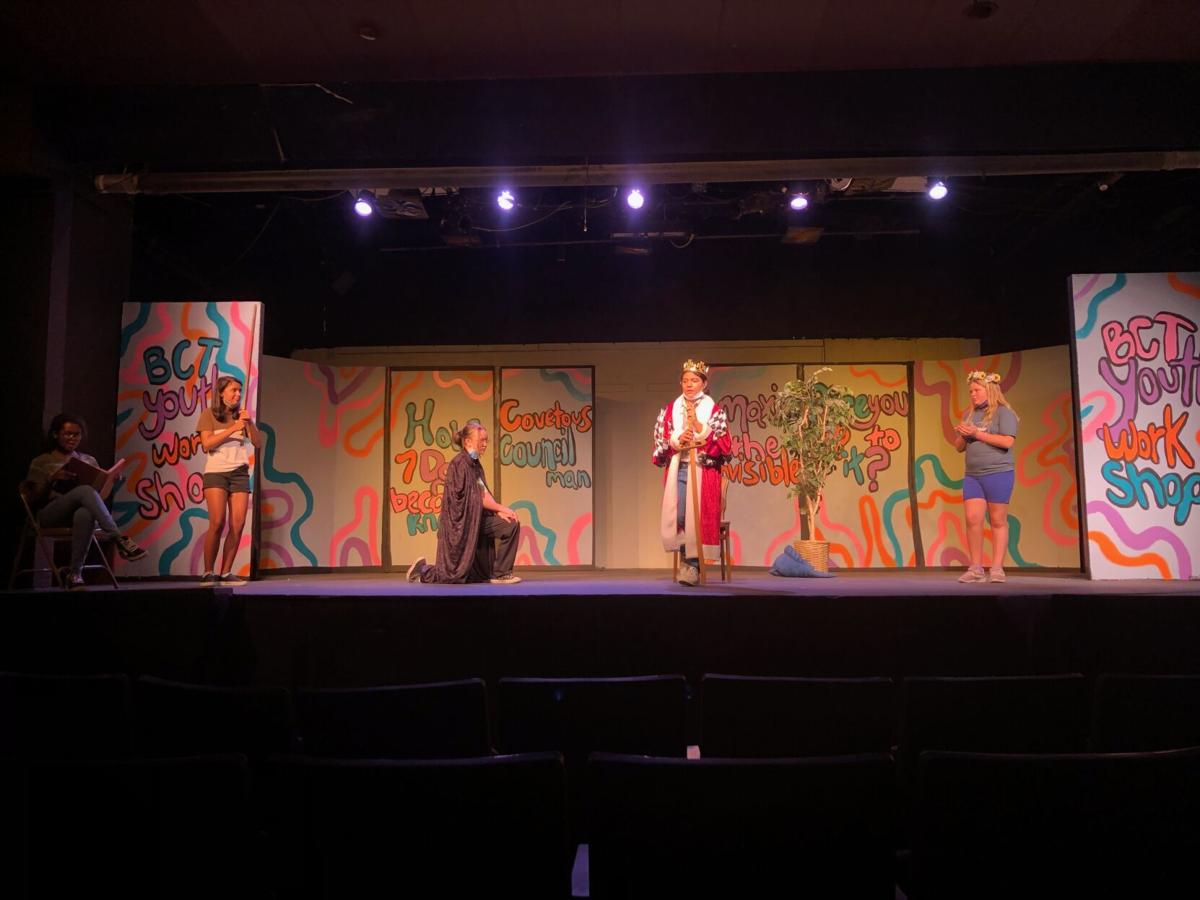 The cast of "Are You Up to It?" — from left, the squire (Mya Walker), Seven Days (Rebecca McGill), King (Abygail Reynolds) and Maiden (Emma Jones) — which is part of BCT Youth Theatre's performance of "Celebrate! A Return to Live Theatre!" 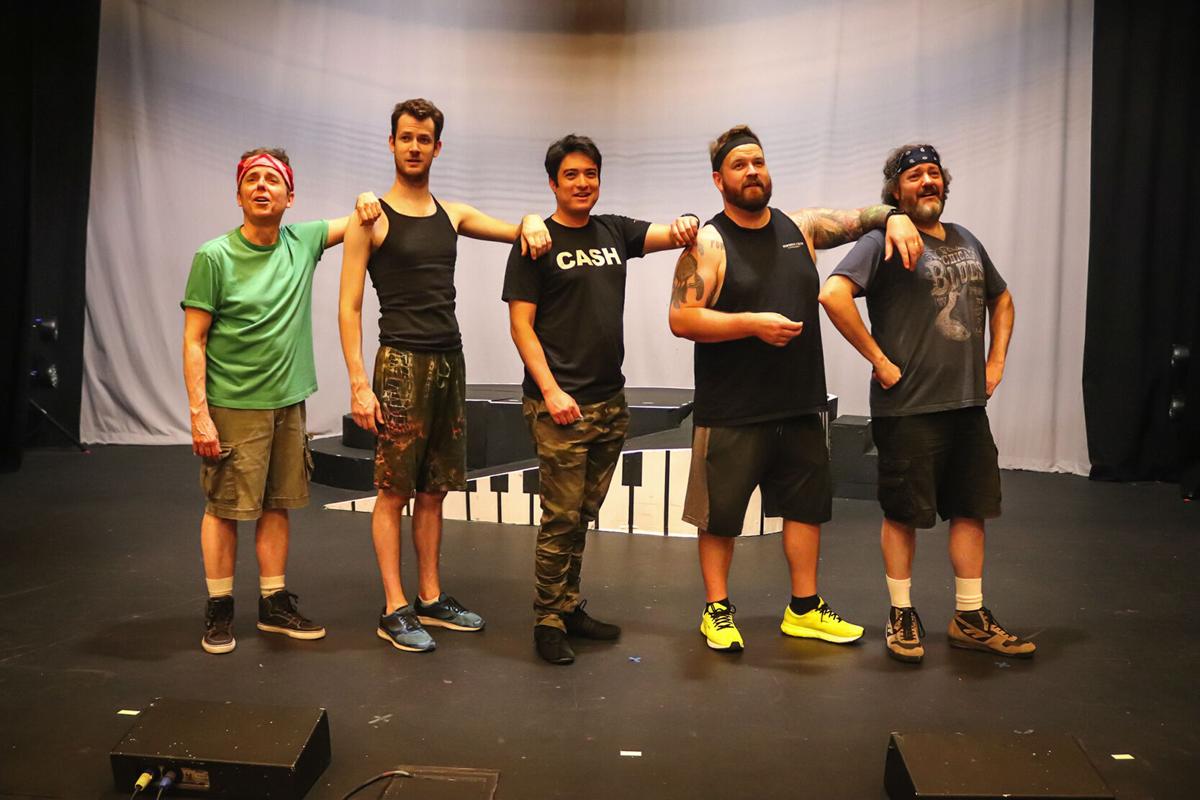 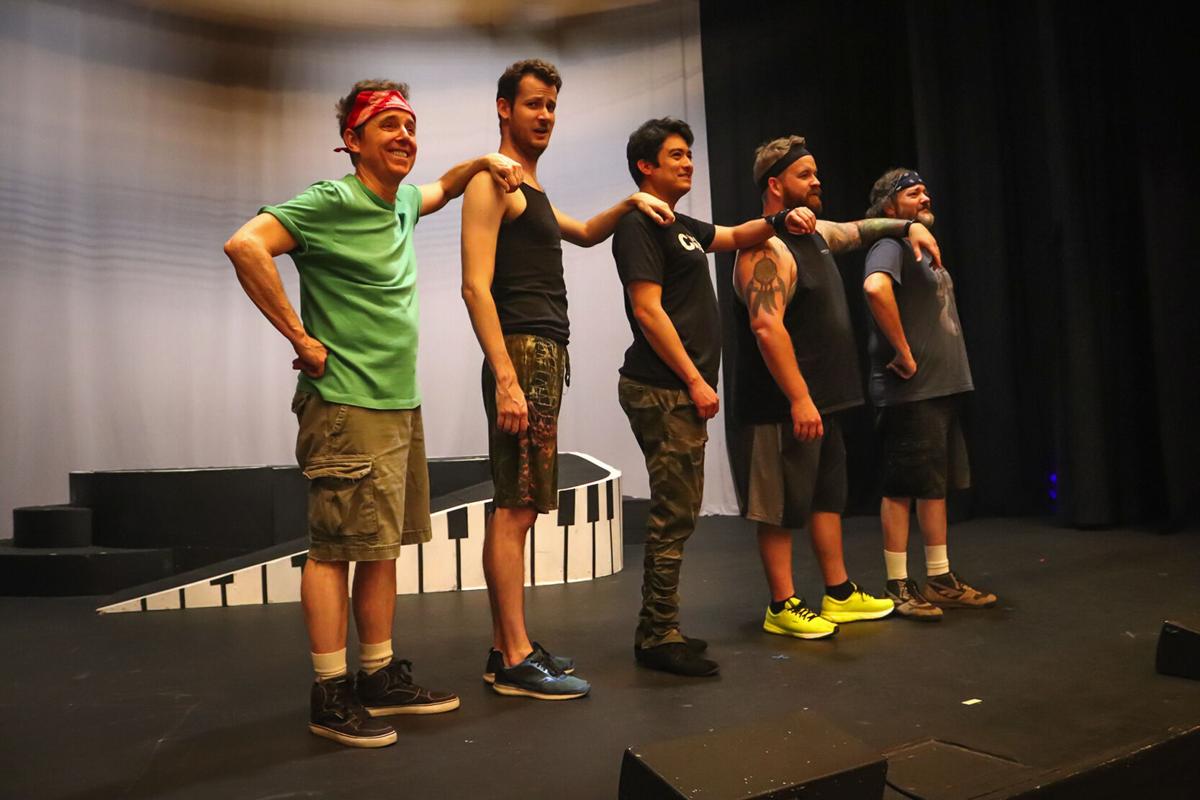 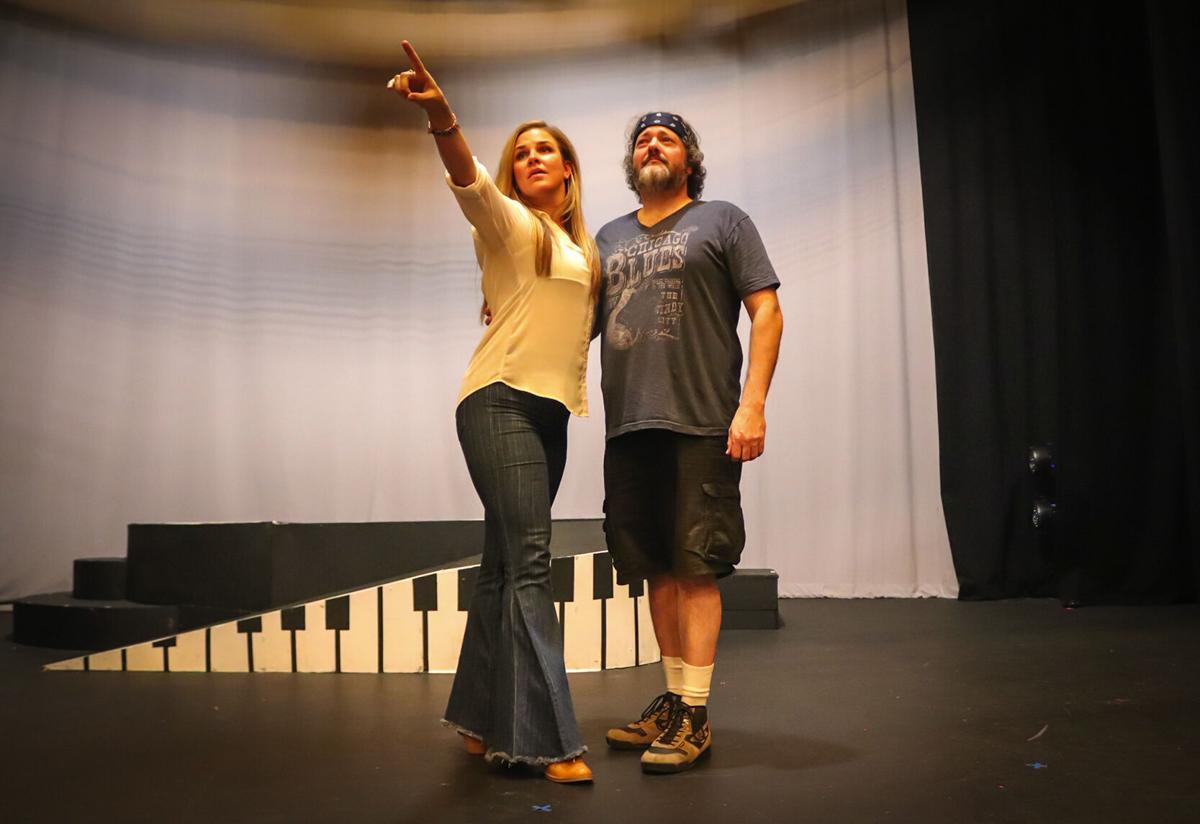 The Lady of the Lake (Bethany Rowlee) guides King Arthur (Ken Burdick) on his quest to find the Holy Grail in rehearsal for Monty Python's "Spamalot," which opens Aug. 27 at Stars Theatre Restaurant.

Jesse Magdaleno, center, leads a rehearsal of the musical number "Always Look on the Bright Side of Life" from Monty Python's "Spamalot," which opens Aug. 27 at Stars Theatre Restaurant. From left, Bret McGlew, Marcus Thompson, Magdaleno, Campbell Cleveland and Spirit.

The cast of "Are You Up to It?" — from left, the squire (Mya Walker), Seven Days (Rebecca McGill), King (Abygail Reynolds) and Maiden (Emma Jones) — which is part of BCT Youth Theatre's performance of "Celebrate! A Return to Live Theatre!"

The Lady of the Lake (Bethany Rowlee) guides King Arthur (Ken Burdick) on his quest to find the Holy Grail in rehearsal for Monty Python's "Spamalot," which opens Aug. 27 at Stars Theatre Restaurant.

As summer winds down, local community theaters continue or are set to kick off their new seasons, bringing the joy of live entertainment back to the stage. Here's a rundown of what you can look forward to over the next few months.

At Gaslight Melodrama, the show goes on. The northwest theater was the first to reopen for indoor shows (with reduced-capacity seating) with its Holiday Extravaganza in November.

Michael Prince, who owns the theater with wife Jennifer, said patrons were on board from the get-go.

"Since we opened back up at the end of November, we've had many, many responses from our patrons about how nice it is to get out of the house and laugh again!," he wrote in an email. "That it was something they needed and something that really helped them get through.

Gaslight's latest show, "The Mobfather," which runs through Sept. 4, was the theater's first back at full capacity.

Prince said it has been joyous to have this "return to, for lack of a better word, normal."

"We're back to having families and companies buying out the house for a night. Whether it's for Grandpa's birthday party or company appreciation night, it's just so nice to see people with a sense of joy and a sense of relief again."

The Gaslight's season continues into the fall with "The Mummy Knows Best," about the Do-Frightly family's effort to stop the Wicked Witch of Westchester (Sept. 17-Nov. 13); and the "Gaslight Holiday Extravaganza" (Nov. 26-Dec. 23).

For tickets and information, visit themelodrama.com.

Stars Theatre Restaurant wraps up its first show of the new season — the musical revue "A Grand Night for Singing" — on Sunday but is already in rehearsals for its next show opening Aug. 27.

"Spamalot," the beloved musical comedy based on the 1975 film "Monty Python and the Holy Grail," runs through Sept. 18. It stars Ken Burdick as King Arthur leading the Knights of the Round Table in this parody of the Arthurian legend.

Operations manager Alex Neal said the Stars team is excited to be able to share its art with the community again.

"We look forward to sharing new stories and music with our patrons of Kern County as we have for over 55 years," he wrote in an email.

He also said the theater is committed to providing quality entertainment while dealing with the concerns and continuing guidance during the ongoing pandemic.

After "Spamalot," the Stars season heads into fall with "Godspell," a 1971 musical based on the parables from the Gospel of Matthew, that runs from Oct. 8 to 30. Local favorite "Wrinkles, the Musical," highlighting the talents of older performers, is next, running Nov. 12 to 21.

In lieu of a traditional Christmas show, Stars will end the year with "The Little Mermaid," a musical based on the 1989 Disney animated film, that runs Dec. 3-19.

The new season is also underway at Stars Playhouse off of Rosedale Highway. Next up for the small northwest theater is "The Shape of Things," a drama from Neil LaBute, which was made into a 2003 film starring Paul Rudd and Rachel Weisz. This version, starring Ryan Lee, Shelbe McClain, Matthew Prewitt, and Maya Blackstone, runs from Sept. 3 to 12.

Another drama follows with "My Mañana Comes," about the back-of-house grind of four busboys at an Upper East Side restaurant, running Nov. 5-14. The playhouse embraces the holiday spirit with its last show of the year, "The Long Christmas Dinner," a play covering 90 years of holiday dinners in a family's home  that runs Dec. 10 to 19.

For tickets and more on both theaters, visit bmtstars.com. (The theater is offering "buy one, get one free" sale on all tickets for "A Grand Night For Singing." Call the box office at 661-325-6100 or purchase show-only at the door. Offer is only good on new reservations and dinner and show tickets must be reserved 24 hours in advance.)

This weekend, Ovation Theatre debuted its second show of the new season, the jukebox musical "Buddy: The Buddy Holly Story," about the famed 1950s rock 'n' roll musician who died tragically at age 22. With a cast of talented musicians, including Brandon Todd, Jeff Ardray, Jeff Ingle and Jake Sadolsky, the show runs through Aug. 22.

Beloved musical "The Sound of Music" is up next with a run from Sept. 10 to Oct. 3. The season continues with "Clue: On Stage," adapted from the 1985 cult classic based on the popular board game, running Oct. 22 to Nov. 14. The holiday season brings the local premiere of "Elf The Musical," playing Dec. 2 to 19, followed by the local debut of the romantic musical "Once," which runs Jan. 14 to Feb. 6.

Musical comedies end the season with the fractured fairy tales of "Into the Woods," running Feb. 25 to March 20, and "Something Rotten!," about the Bottom brothers' struggle to compete with William Shakespeare, which plays April 8 to May 1.

To purchase tickets or for more information on Ovation, visit theovationtheatre.com.

In advance of its new season, Bakersfield Community Theatre is hosting its BCT Youth Theatre performance "Celebrate! A Return to Live Theatre!" on Saturday.

For the mainstage season, Hefner said they focused on laughs.

"We decided to stay with comedies for our 94th season to give our audiences and performers lighter material as we continue to move through the effects of the pandemic," she wrote in an email. "All of our company members will be required to be vaccinated until a time when the threat has subsided. We will have other precautions, requiring masks on audience members and seating in family pods distanced from others."

Hefner will direct the season opener, "Deathtrap," about a washed-up writer and his wife who devise a plot to bring him another successful play. That black comedy runs Oct. 8 to 23.

In February, Cathy Henry will direct "The Importance of Being Earnest," known as "a trivial comedy for serious people," with a run from Feb. 14 to 29.

Next up is Neil Simon's autobiographical coming-of-age tale "Brighton Beach Memoirs," which plays May 27 to June 11.

BCT's season closes with the 34th annual One Act Festival, running from June 24 to July 2.

The theater will also present limited-run studio shows throughout the season. "All Together Now," a musical review that promises "a lineup of songs meant to bring everyone back into the theatre and celebrate being together once again," is first, with a run from Nov. 12 to 14.

Now through Oct. 2, patrons can buy a season pass for two for $150 (normally $100 per pass). Passes include access to all mainstage and studio shows as well as BCT special events. For passes and more information, visit bctstage.org.

After hosting a three-day music event with Killer Kern Records, The Empty Space brought theater back to the stage with Tonicism Productions. The youth theater group is offering its take on Roald Dahl's "James and the Giant Peach Jr." and the super-sized murder mystery "Employees Must Wash Hands Before Murder!" Both shows continue through next weekend. (Get tickets at tonicism.com.)

"We’ve been in rehearsals for three weeks now and the talent from our cast is just flourishing after being stifled for over a year," Saldaña wrote in an email. "We’re beyond thrilled to reopen with a musical that is so full of heart and humor, two things that have been complete necessities over these past two years."

Saldaña said The Empty Space is taking cues from its peers as well as L.A. theaters and Broadway in finalizing its options to maximize safety for its audience. More details will be available when tickets for "The Full Monty" go live on Aug. 16.

"We continue to encourage our patrons to stay safe, get vaccinated, and get ready to return to The Empty Space in September," she wrote.

After an eyeful of "Monty," the season continues with the local debut of "Girls Kills Nazis," a dark comedy by "Geeks vs. Zombies" playwright and "friend of The Empty Space" James Kopp, which runs Oct. 15 to 30.

The drama "The Light in the Piazza," directed by Sheila McClure, is the last currently scheduled show, running from Jan. 21 to Feb. 12.

Saldaña said the theater's annual Pitch Day will be held Sept. 18 after which the board will finalize the rest of the season into 2022.

I’d almost forgotten what a privilege it is to attend the opening night of a play.