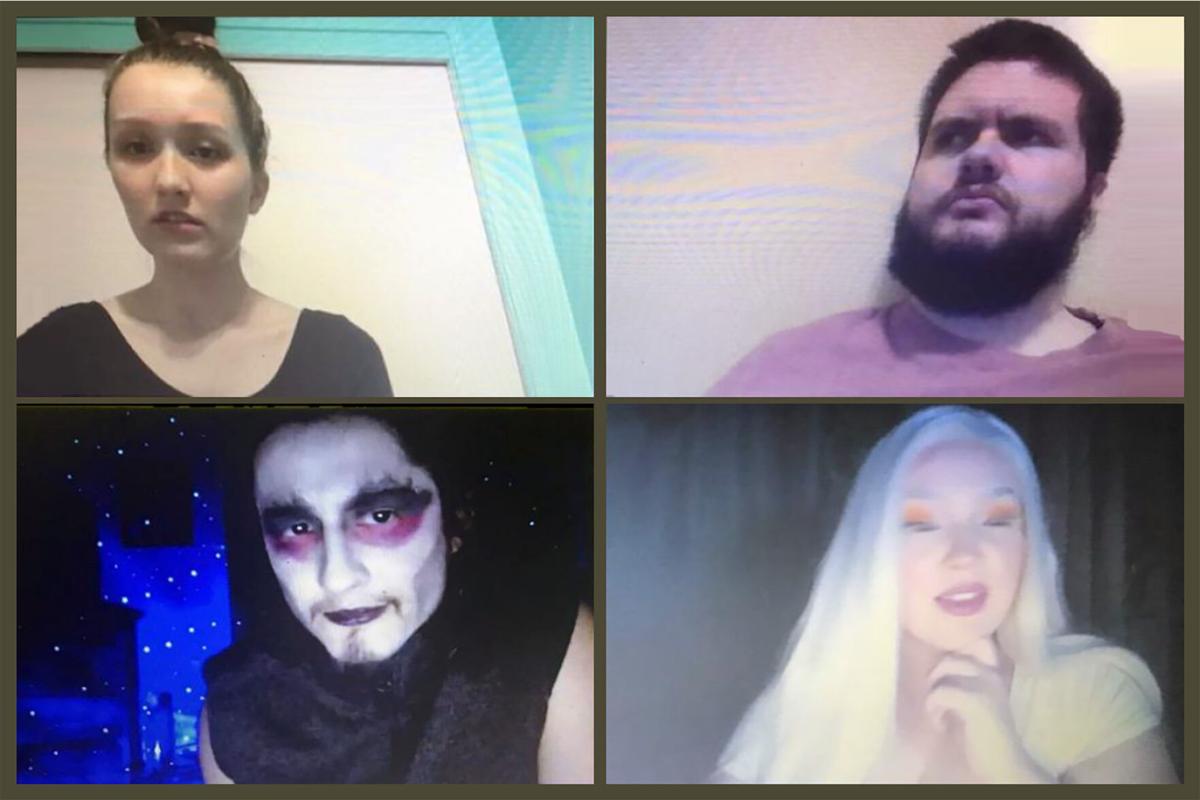 The actors from "The Game" rehearse, clockwise from top left, The Girl (Elizabeth Bomar), The Youth (Emerson Herzog), Life (Julie Verrel) and Death (Salvador Vidaurri). The show will be presented on the Bakersfield Community Theatre's Facebook page on Saturday. 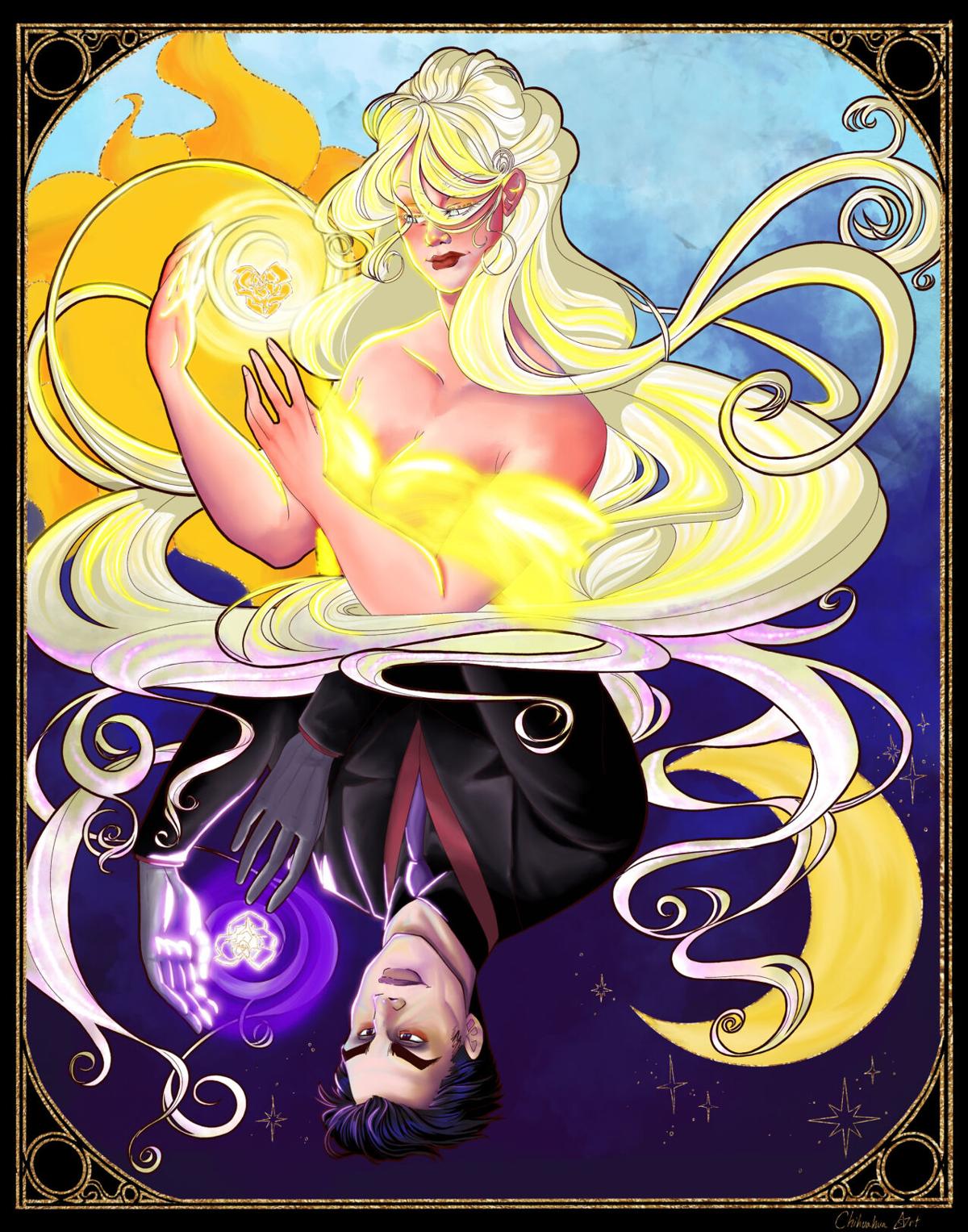 Artist Victoria Olmos created this artwork for "The Game," the latest Virtual One Act from Bakersfield Community Theatre coming to its Facebook page on Saturday. Prints are available to order at bctstage.org.

The actors from "The Game" rehearse, clockwise from top left, The Girl (Elizabeth Bomar), The Youth (Emerson Herzog), Life (Julie Verrel) and Death (Salvador Vidaurri). The show will be presented on the Bakersfield Community Theatre's Facebook page on Saturday.

Artist Victoria Olmos created this artwork for "The Game," the latest Virtual One Act from Bakersfield Community Theatre coming to its Facebook page on Saturday. Prints are available to order at bctstage.org.

Stakes are high these days but at Bakersfield Community Theatre, Life and Death literally take the virtual stage in “The Game."

Coming Saturday to the theater's Facebook page, the morality play focuses on Life (Julie Verrell) and Death (Salvador Vidaurri) as they role dice for the fates of The Youth (Emerson Herzog), who is a poet, and a dancer known as The Girl (Elizabeth Bomar).

The poet and dancer meet on the cliff they separately headed to in order to end their lives. (McClain noted there is discussion of suicide in the show.) There Life and Death gamble for the fates of the duo.

Director Shelbe McClain said she came across the four-character allegory while reading plays to stay busy during quarantine.

She wrote in an email, "I have worked on a few virtual productions already and it has solidified in me just how important art is for people, especially during challenging times."

For McClain, "The Game" encompasses how she feels about the current state of affairs, knowing that while life is not always what we expect it to be and things do not always go our way, that we should enjoy the little things.

We should "stop focusing on everything that is going wrong and try to focus on that one moment of happiness that keeps us going," she wrote. "For me, rehearsals became that moment of happiness. Spending time with my cast over Zoom, sharing a laugh, and creating beautiful art together helped keep me going even when everything around me felt helpless and to me that is exactly what this play reminds us."

Coinciding with the show is the release of original artwork by Victoria Olmos capturing "the game of life," featuring the play's adversaries.

McClain wrote, "I’m so honored for her artwork to go up alongside this show and I really think she gave us that little extra touch that pushed the feeling of this production over the edge!"

The show will go live on the theater's Facebook page (facebook.com/bctstage/videos) at 7:30 p.m. Saturday. It is recommended to go to the page a few minutes before showtime.

Along with unwinding to enjoy some live theater, McClain said she hopes people are encouraged to support the theater.

She wrote, "Please donate to our local theatres! They are not able to operate as usual and have been working very hard to remain afloat. Anything helps to keep their doors open so we may have a place to make art when we return!"

Jan Hefner, BCT's executive director, said that there are plans to kick off BCT's 93rd season with virtual full-length plays through at least the end of the year.

"Some pieces are not available for virtual presentation through the licensing companies, but we have some excellent options from which to choose," Hefner wrote. "We hope to announce them soon."

Hefner said the theater board is open to collaborating with artists on projects that can be presented virtually, just as McClain brought them the current show. They have also coordinated musical presentations by solo artists and groups through the Smule app.

And later in the season, if permitted to rehearse together again, Hefner said the theater will prioritize the two shows that were in rehearsals during the shutdown in March: musical comedy "The Producers" and the working-class drama "Sweat."

The board has been grateful for community support through donations and sharing events, Hefner said.

"We are determined to see this crisis through and eventually be back on stage again. Clearly we all would rather be performing live and selling tickets, but only when it is safe to do so. Until then, we will continue virtually."