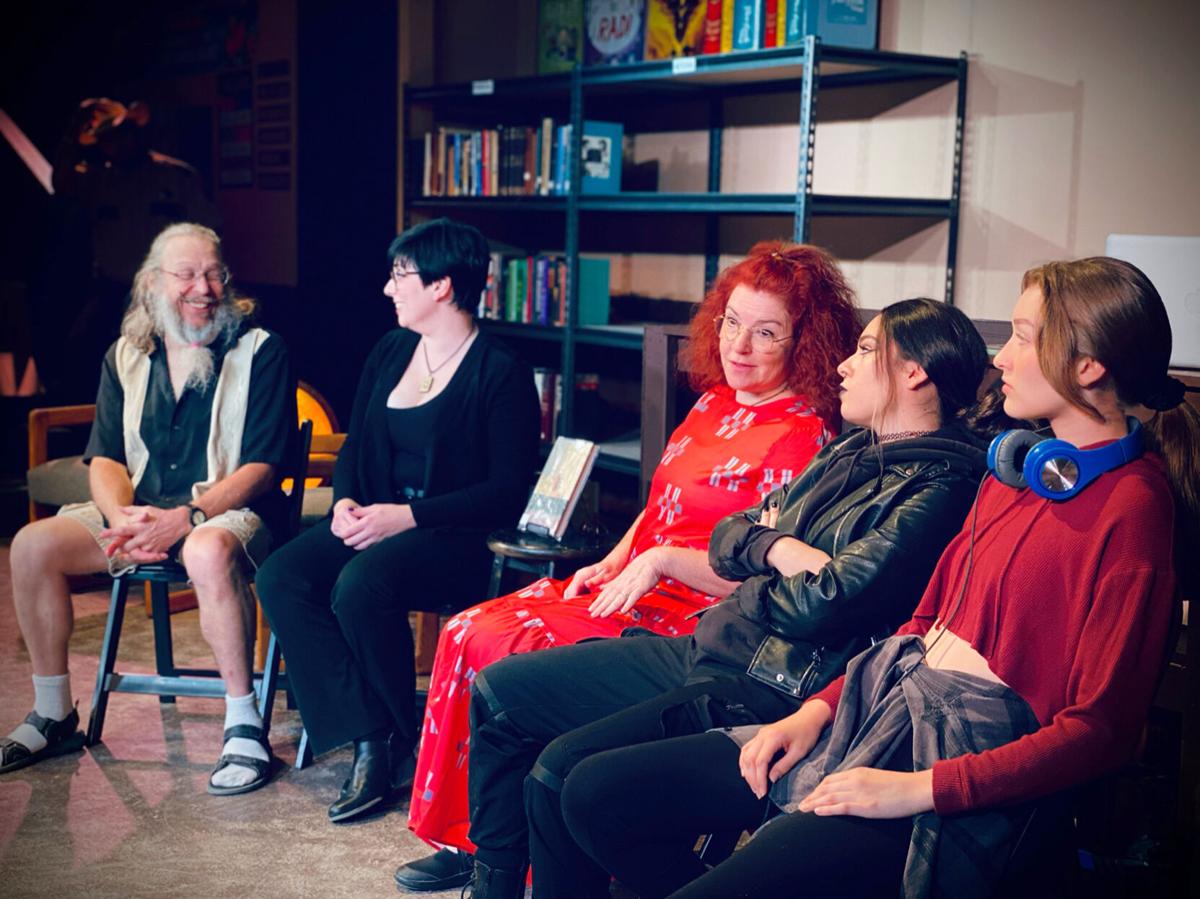 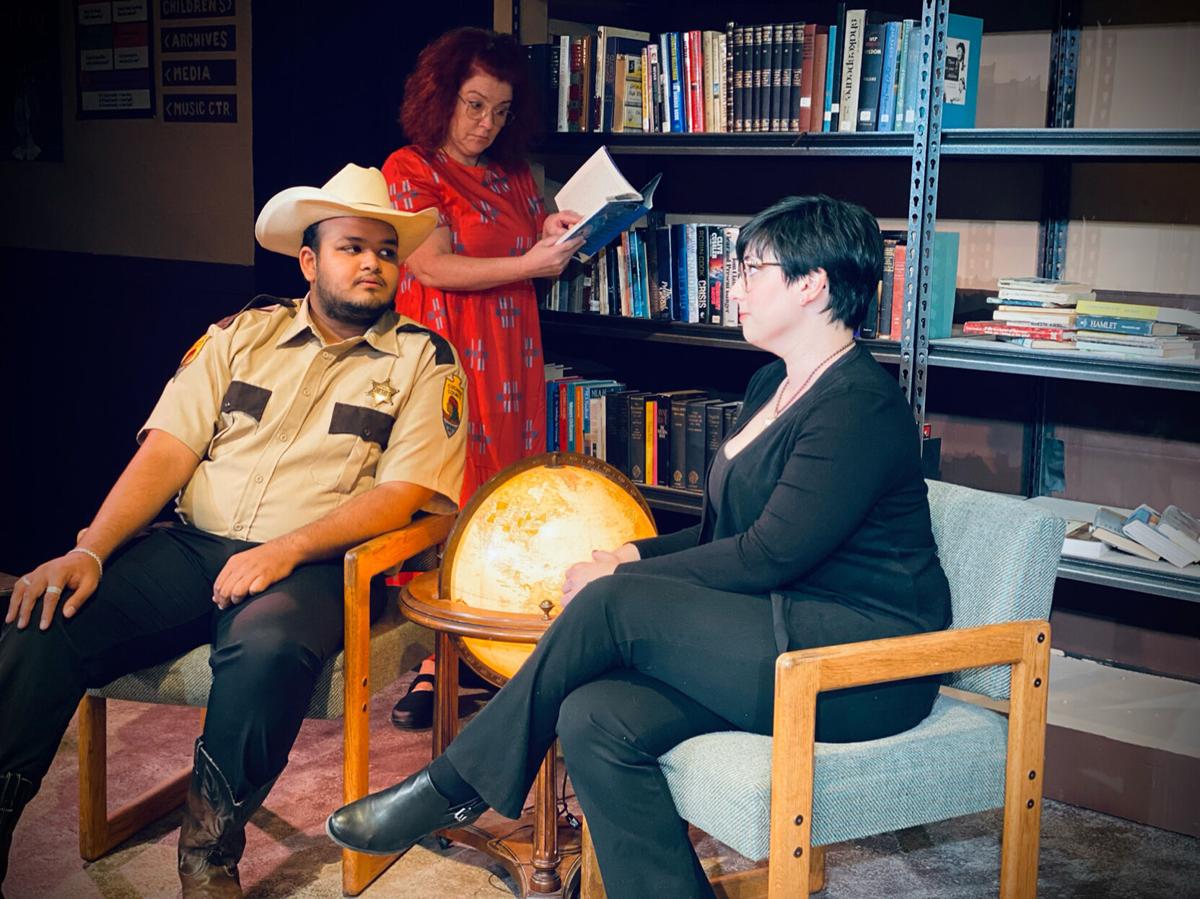 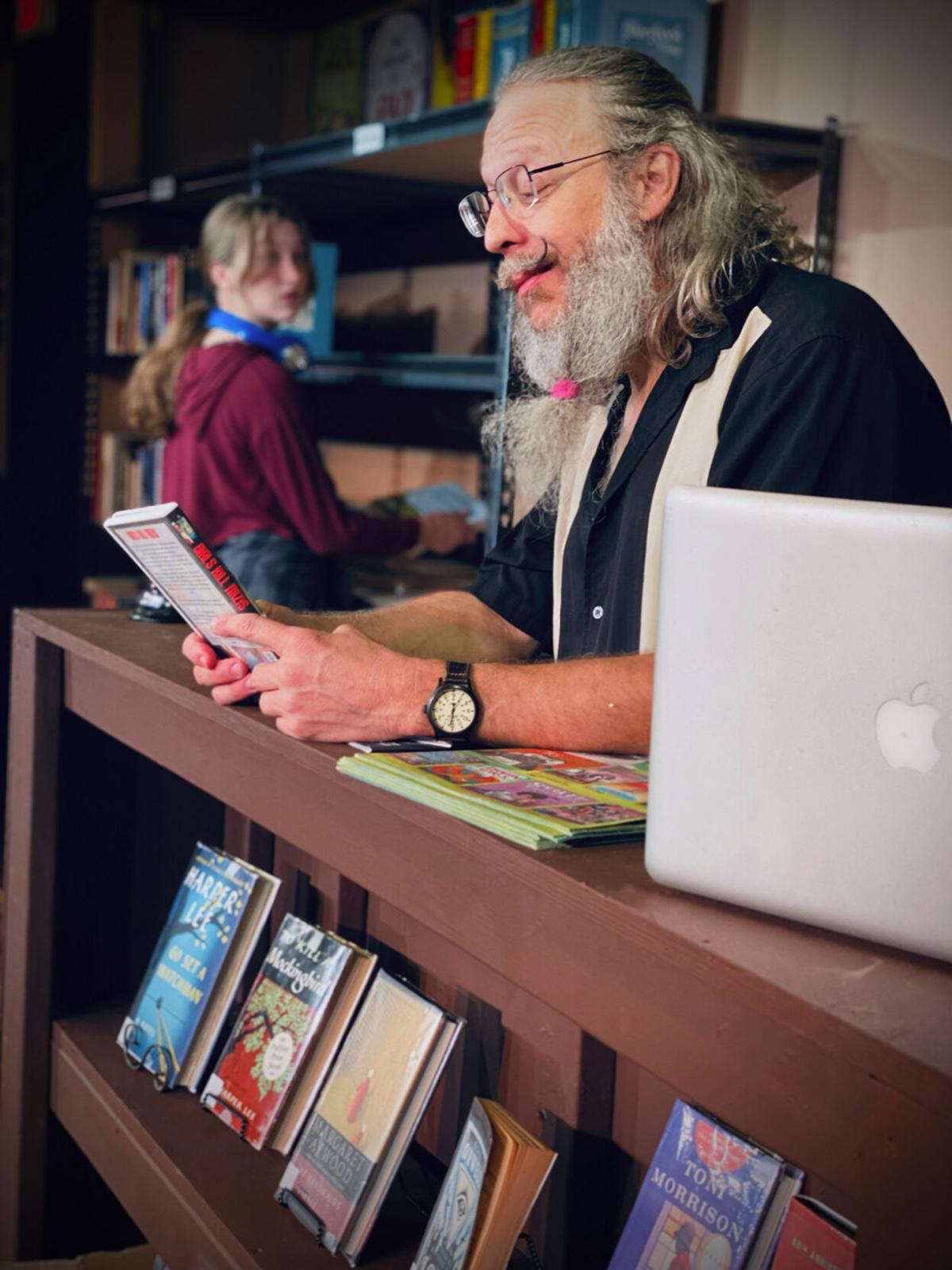 Bob (Ed French) doesn't know the real motivation of the Nancy Wake Book Club — and he watches the movies instead of reading the books — in "Girls Kill Nazis," opening this weekend at The Empty Space. 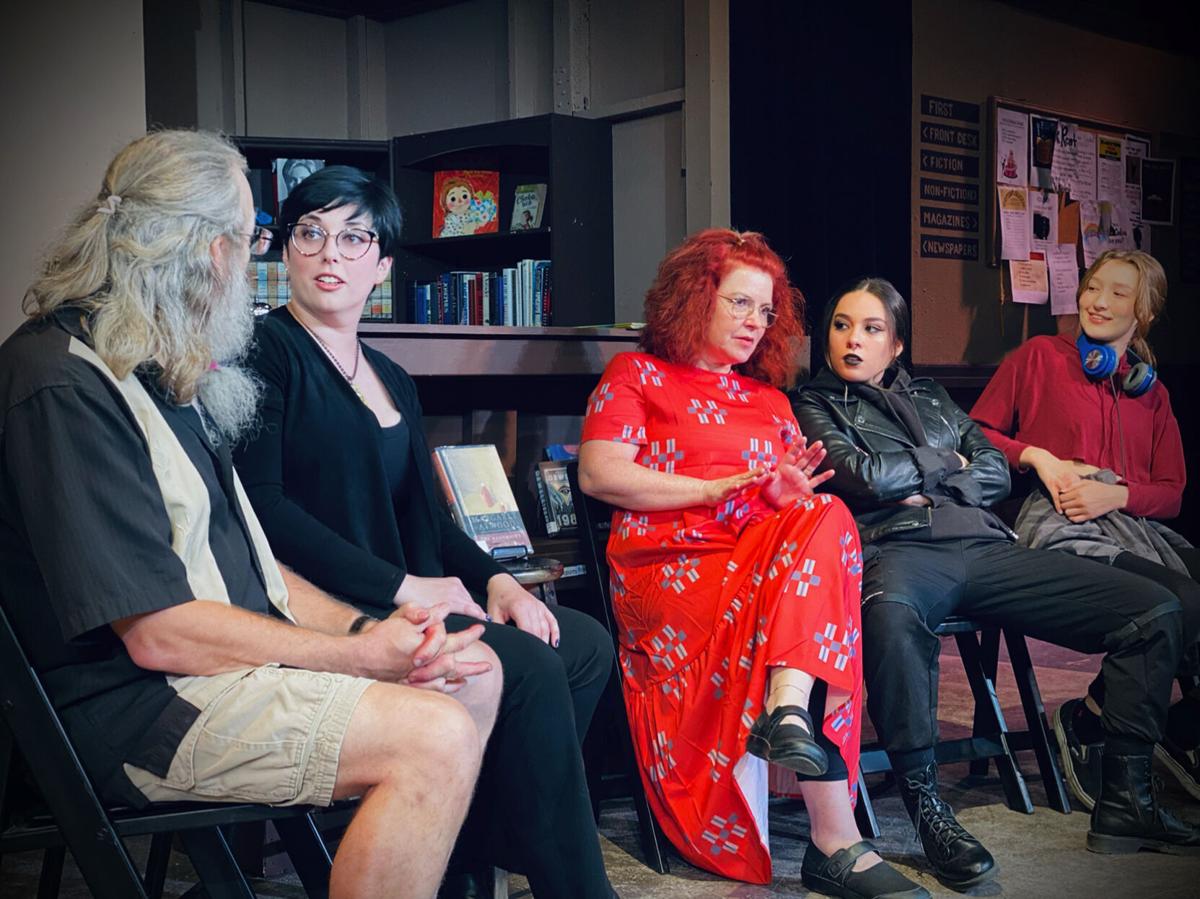 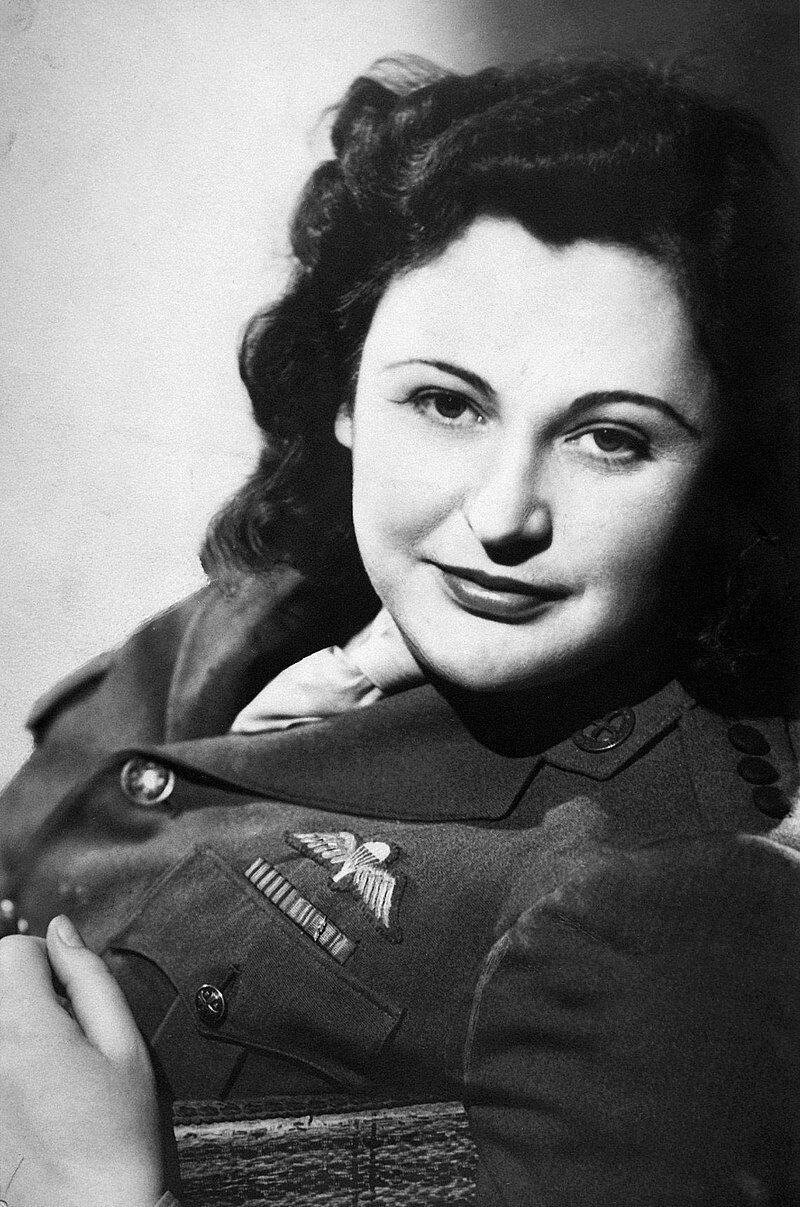 Nancy Wake, a nurse and journalist who became a member of the French Resistance and Special Operations Executive (SOE) during World War II, is one of the remarkable women recognized in "Resist," an informational exhibit featuring the Nazi-fighting women of the Resistance on display at The Empty Space Gallery.

Bob (Ed French) doesn't know the real motivation of the Nancy Wake Book Club — and he watches the movies instead of reading the books — in "Girls Kill Nazis," opening this weekend at The Empty Space.

Nancy Wake, a nurse and journalist who became a member of the French Resistance and Special Operations Executive (SOE) during World War II, is one of the remarkable women recognized in "Resist," an informational exhibit featuring the Nazi-fighting women of the Resistance on display at The Empty Space Gallery.

Don't let those how-to books fool you: There is no simple formula for creating original works. Having creative friends can make the difference, as "Girls Kill Nazis" playwright James Kopp learned a few years ago.

He had just finished a production of his play "Geeks vs. Zombies" in 2016 when collaborator and friend John Morrison told him he had the title for Kopp's next play.

The finished product opens this weekend at The Empty Space in its second production and its first in Bakersfield.

"Girls Kill Nazis" lives up to the title, so don't expect mere allusions to violence.

"It's pretty graphic," Kopp wrote. "This is not 'Cats.' My plays are not really for younger audiences. I would say don't bring anyone under 16."

For the playwright, his favorite scenes are when the members of the Nancy Wake Book Club sit around and talk about books.

"Yes there is violence and killing, but I really like when our characters just sit down and talk. People sitting and talking about their feelings is the foundation for pretty much all theatre."

The aforementioned book club, named for the journalist turned French Resistance fighter, is in the town of Bisbee, Ariz., which in this play is, like the rest of the U.S., under the rule of the American Nazi party.

Club members Ruth (Claire Rock), Betty (Kate Gill), Diana (Maya Blackstone) and Sydney (Elizabeth Bomar) have banded together to eliminate those Nazis threatening their community, relying on the power of friendship and perseverance.

In developing this show, Kopp took inspiration from his wife, Jennifer Sorkin, whose experiences with sexism and harassment informed the narrative. (She also performed in the original production.)

"Talking to her and other female artists, it wasn't long to figure out what this story was going to be about."

Although he describes it as a comedy — and he wants people to laugh — Kopp said he wants to get people talking about real-life issues addressed in this alternate reality play.

"The subtext is about the white supremacy issue we are facing in America, and it's not subtle. It's been an issue we, as a country, have been ignoring for far too long. And it starts with us saying, 'Yes, this is a very real issue that is affecting everyone who isn't white, and we need to do better.'

"'Humans should be judged by their skills, their passion, and their sincerity, not on the color of their skin.' Which is a very old statement, but one sadly that we need to keep saying."

Along with his own show, Kopp encourages the community to support the local arts, whether it's theater, music or fine arts.

"I'm from Bakersfield, and while this city gets a lot of teasing, and it's earned most of it. I would also say the amount of talented artists that have emerged from this city is jaw-dropping.

"People, I think to forget that all great artists start somewhere, and your friend, child, or neighbor might be the next great writer, painter, singer. A little support early on can make all the difference."

When: 8 p.m. Fridays and Saturdays through Oct. 30

Admission: $15, $20 for preferred seating, $10 for students and seniors. Tickets available at esonline.org

Jesus Fidel, curator of The Empty Space Gallery, said the display consists of biographies of eight female resistance fighters alongside one or two photos of each.

The inspiration came from the original production of "Girls Kill Nazis," which had an informational board in the theater's lobby, displaying women who defied Nazis.

Fidel, alongside Claire Rock and Jordan Fulmer (who are both in the show) and Missy Lonsinger, Justin Thompson, Julia Rios and Kristina Saldaña, spent the past two months researching and writing the biographical material for the exhibit.

While some of these women are still known, such as American-born entertainer turned WWII spy Josephine Baker, others may not be familiar.

"A lot of these women were forgotten in time because people became hesitant to teach or talk about the Jewish resistance, fearing that it would make the Holocaust look not as bad as it really was," Fidel wrote. "And highlighting fighters would make the victims look bad for not standing up for themselves like these women did. We want people to see these women, and know what they sacrificed for greater mankind."

Fidel said he hopes this exhibit moves people the way it did for him when he was installing it.

"Nurses, regular looking everyday nurses that could very well be my sisters, beauty queens, the girl next door. I was happy for these ... babes to be hung on our walls for all of our patrons to see them, and celebrate them, and mourn with them. It's an amazing tribute to these forgotten warriors, and I hope the exhibit encourages everyone to go home and educate themselves beyond what we're showing them."

"Resist" will be on display for the run of the show, which closes Oct. 30.