Agnes (Maya Blackstone), left, delves into the world of "Dungeon & Dragons" with the help of Chuck (Jan Mateo Tugab) and others as a way to connect with her sister who died in "She Kills Monsters: Virtual Realms." The show will be presented virtually through Cal State Bakersfield this week. 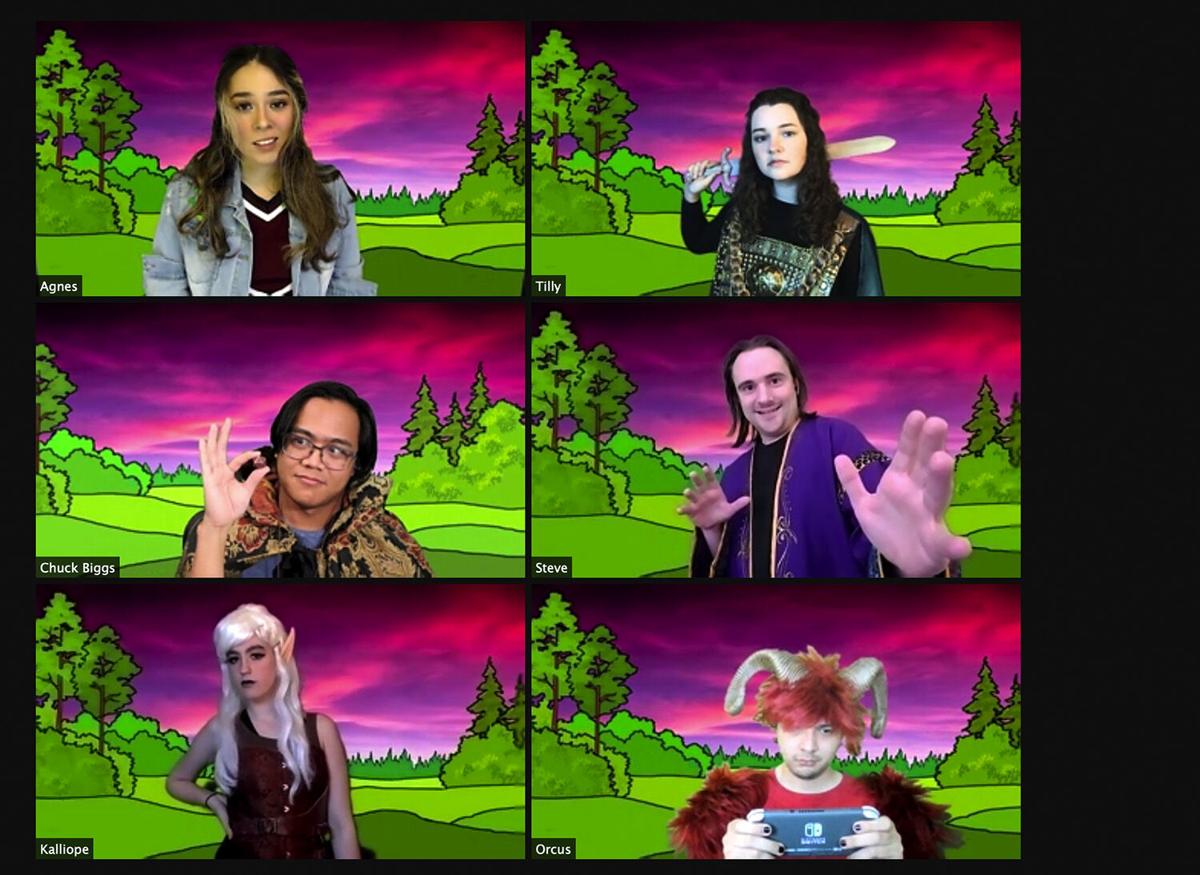 Agnes (Maya Blackstone), left, delves into the world of "Dungeon & Dragons" with the help of Chuck (Jan Mateo Tugab) and others as a way to connect with her sister who died in "She Kills Monsters: Virtual Realms." The show will be presented virtually through Cal State Bakersfield this week.

While many of us are well-acquainted with battling Zoom fatigue and other work-at-home technical issues, there's a more thrilling fight brewing in the digital realm. Cal State Bakersfield's is bringing "She Kills Monsters: Virtual Realms" to your screens this weekend with battles, dancing and a bit of magic.

Director Mandy Rees describes the show as a fun adventure into a "Dungeons and Dragons" fantasy world with some heartfelt scenes and a strong message.

"It's about appreciating people, seeing who they truly are and celebrating who they are," she said. "That message is there, done in a fun fantasy-filled way with lots of comic moments."

In the play, Agnes (Maya Blackstone) has recently lost her sister, Tilly (Molly Jiron), in a car accident that also killed their parents. When she finds her teenage sister's D&D notebook, she decides to explore the imaginary world of elves, demons and fairies where Tilly took refuge. In her journey, she enlists Tilly's friend Chuck (Jan Mateo Tugab) to assemble the party in the game that includes Tilly's character, Tillius the Paladin (played by Jiron).

Other people from Agnes' and Tilly's lives are seen as allies and viilains in the virtual realm as portrayed by Charlotte Smith, Timothy Zuniga, Abbie Duncan, Natalie Love, Gabriela Castro, Yasmin Marcelo, Jacob Cota and Michael Grant. Divyang Motavar serves as the narrator for the play.

To bring some of the play's more fantastic elements to the small screen took some research, according to director Mandy Rees.

"I've done all kinds of stage productions with all sorts of technical needs," she said. "I understood how they work, but this was a big black hole to find out how things work. We have some great staff members who worked on reading up about it."

Rees credits Denica Nabor, who is stage managing the show as part of her senior project, with helping bring the show together on the technological side. The production will utilize an open broadcasting technique that transmits Zoom to YouTube, where viewers will stream it.

Playwright Qui Nguyen adjusted his original show to accommodate "virtual realms" that theaters would be utilizing during this pandemic when most shows could not be performed in front of live audiences.

The show features some dance and fight scenes, quite a feat since each performer is in their own space, only interacting on the screen. Choreographer Marvin Ramey and combat choreographer Mendy McMasters helped the students work out the moves.

"It's a lot safer, no one accidentally hits one another," Rees said of the virtual fight scenes.

"Stage combat requires eye contact, here it requires screen contact," she said. "Because this is a fantasy we get away with it."

Rees said, "There may be some moments you see more of their torso but we have no clue what they are wearing on their feet. This is a show where we didn't budget anything for shoes."

The otherworldly elements keep the show moving, which is good news to those who have suffered from Zoom fatigue.

"It's written in short scenes that go back and forth between reality and fantasy. It moves the story quickly. You never get tired."

And the cast and crew have benefitted from being able to creatively collaborate, Rees said.

"Theater is such a great activity during this time because we have a way to come together and work together. We have a project, a sense of human connection."

"Seeing what these students are able to do under these circumstances, I am really proud of them and they've been doing a great job."

When: Live performances will stream on YouTube at 7:30 p.m. Thursday, Friday and Saturday, 2 p.m. Saturday and Sunday