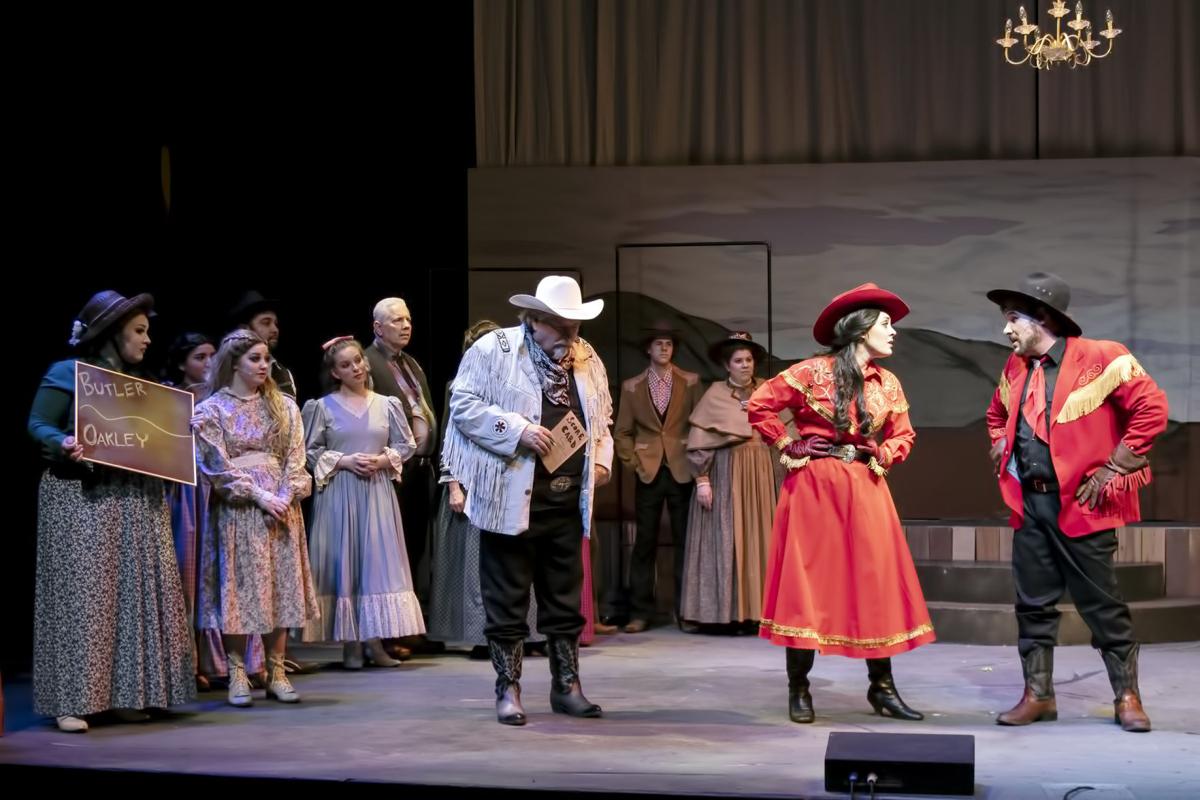 Annie Oakley (Amelia Mejia) and Frank Butler (Kyle Whitaker) both contend "anything you can do, I can do better" in the number "Anything You Can Do" from "Annie Get Your Gun," playing at Stars Theatre Restaurant. 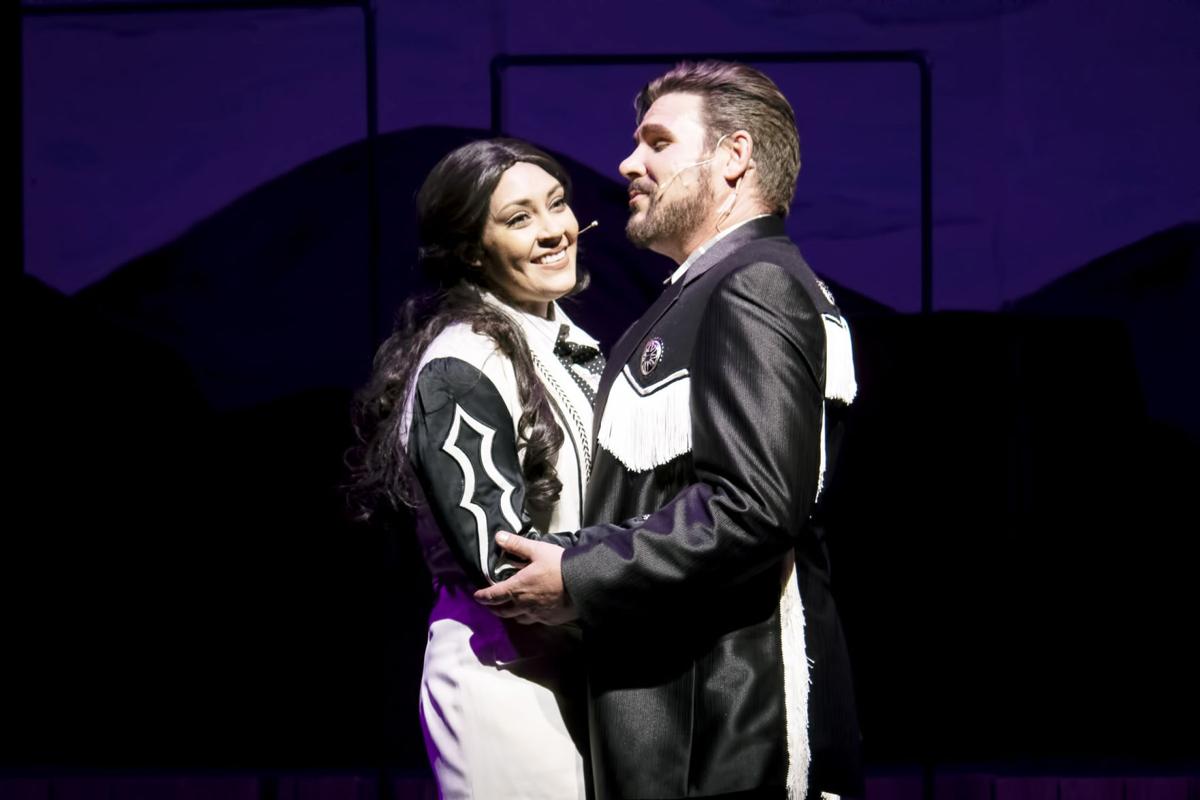 Annie Oakley (Amelia Mejia) and Frank Butler (Kyle Whitaker) compete for each other's affection in "Annie Get Your Gun," opening this Friday at Stars Theatre Restaurant. 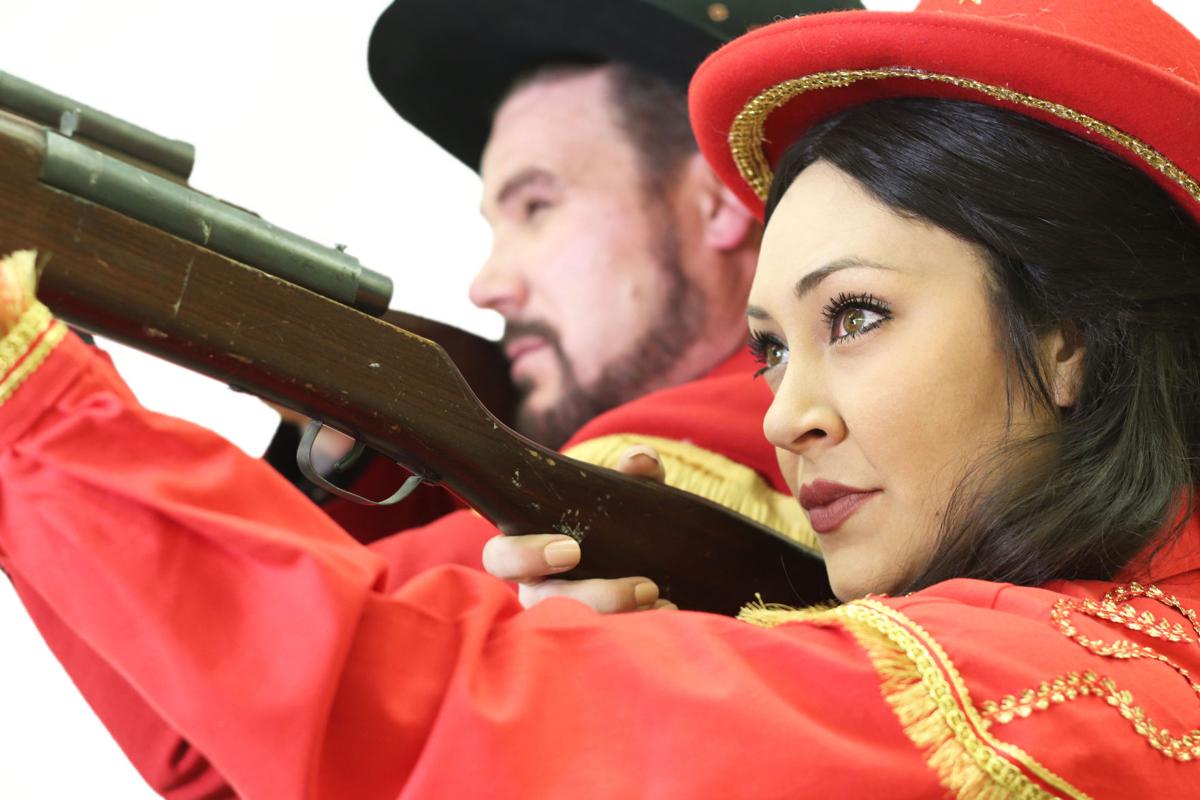 Annie Oakley (Amelia Mejia) has the best shot around and soon eclipses Frank Butler (Kyle Whitaker) as the main attraction in Buffalo Bill's Wild West show in "Annie Get Your Gun" at Stars Theatre Restaurant. 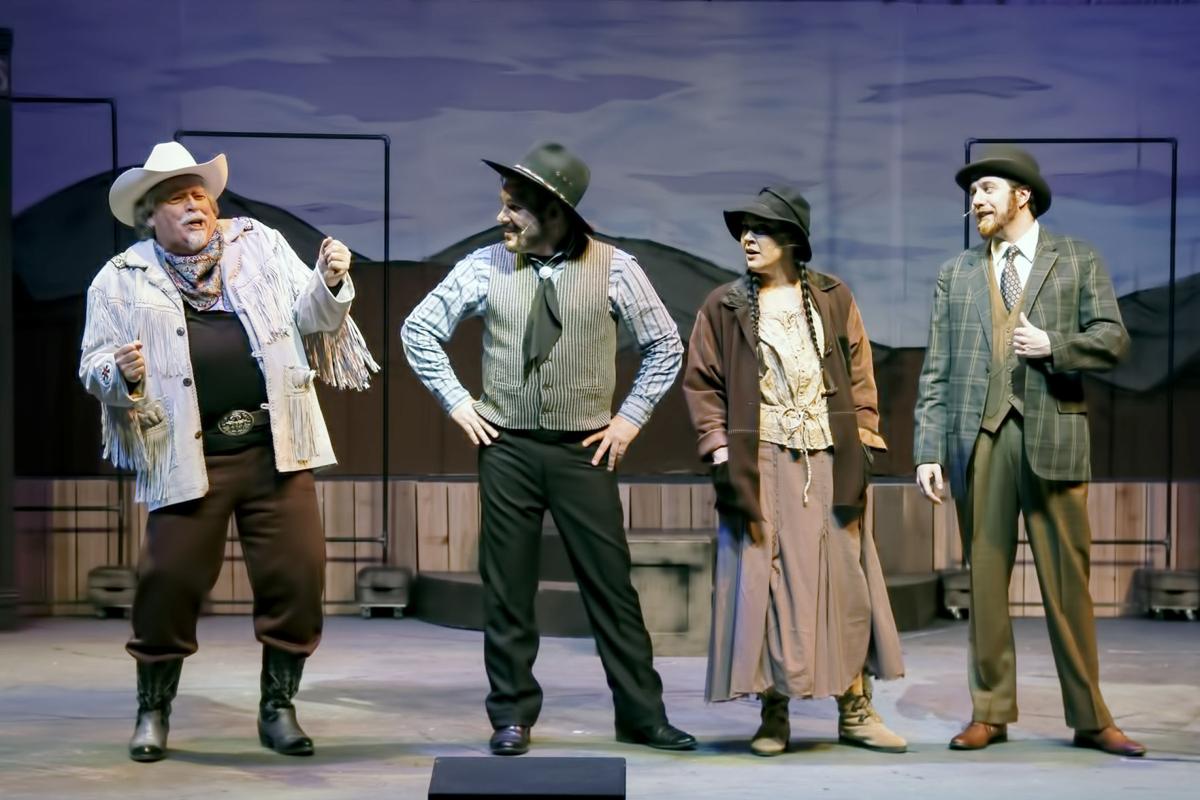 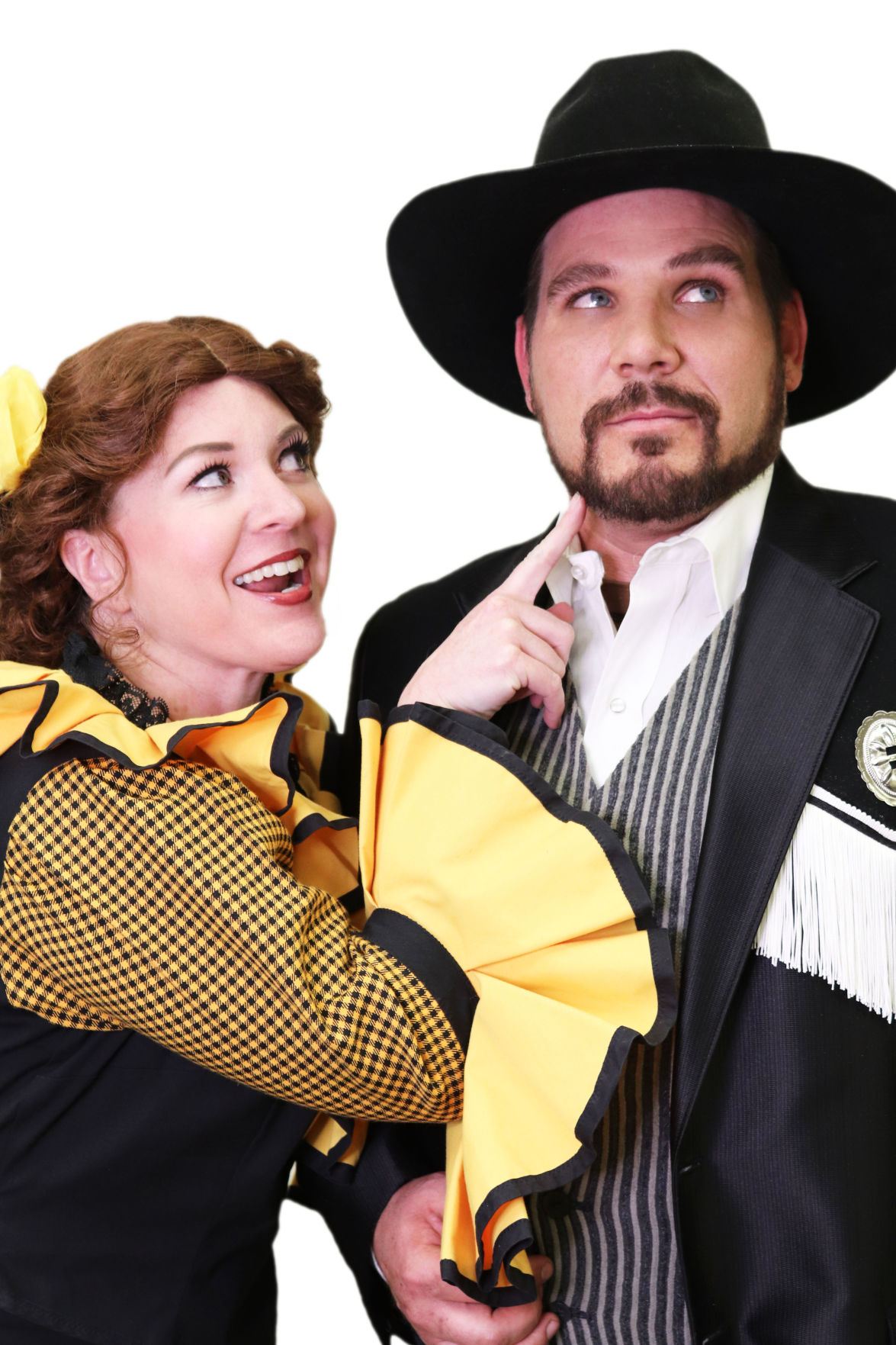 Annie Oakley (Amelia Mejia) and Frank Butler (Kyle Whitaker) both contend "anything you can do, I can do better" in the number "Anything You Can Do" from "Annie Get Your Gun," playing at Stars Theatre Restaurant.

Annie Oakley (Amelia Mejia) and Frank Butler (Kyle Whitaker) compete for each other's affection in "Annie Get Your Gun," opening this Friday at Stars Theatre Restaurant.

Annie Oakley (Amelia Mejia) has the best shot around and soon eclipses Frank Butler (Kyle Whitaker) as the main attraction in Buffalo Bill's Wild West show in "Annie Get Your Gun" at Stars Theatre Restaurant.

Beloved musical "Annie Get Your Gun" tells the story of real-life sharpshooter Annie Oakley and her experience with Buffalo Bill's Wild West Show. But what do you do when your star is a little bit gun-shy? Proving there's "no business like show business," the lead actress of Stars' new production stepped up to the challenge just like her spunky character.

"To be honest, I have always been terrified of guns," actress Amelia Mejia wrote in an email. "Squirt guns, fake guns, real guns, I could easily go without. In fact, the first few rehearsals we had, I had to have pep talks with the cast to calm me down (one of the many reasons I appreciate this group of performers so much)."

Mejia said she learned how to properly hold, point and disarm a gun — although everything used in the show is nonoperative — and benefitted from the expertise of the safety team and co-star Kyle Whitaker, who plays fellow sharpshooter and love interest Frank Butler.

"It definitely helped having a former shooting range instructor as my co-partner on stage."

Director Cathy Henry said there are some theatrical tricks to put some pizazz in the pair's shooting skills, which are on display in this show within a show.

"All of the action takes place as a part of a performance at Buffalo Bill’s Wild West Show," Henry wrote in an email. "One of the aspects of that arrangement is that all of the scene changes are a part of the show; the audience is told what scene is coming up and there is no attempt to hide the process in a blackout."

Keeping the action moving is the show's owner, Buffalo Bill, played by Mark Price, who returned to the local stage after a two-year acting hiatus. He said he was drawn to the role because the showmanship.

"I wanted to reveal a fun, loud, theatrical side of him," Price wrote. "The zip and zing of a ringmaster (versus the buffalo hunter side). And Cathy, bless her heart, has allowed me to embellish with wild abandon. You gotta love a director like that."

Henry said she enjoyed directing the actors bringing these larger-than-life characters to the stage.

"Mark Price is delightful as Buffalo Bill, and he and Tom Richardson (Pawnee Bill) and Tim Fromm (Sitting Bull) have way too much fun with their characters."

Along with bringing out strong performances, Henry said she was drawn to the musical with its rich story and Irving Berlin classic tunes like "There’s No Business Like Show Business,” “Anything You Can Do” and “They Say It's Wonderful."

"This show is lively and fun, and it is a good escape from the everyday issues and concerns that seem to be everything we hear and see at the moment," Henry wrote. "Granted, the plot follows the tried and true 'boy meets girl, boy loses girl, boy gets girl' plot line, but the main characters were actual people who made a mark in American history."

Henry said one of her goals was to do justice to the historical elements of the story as they are presented in a fictional setup.

Mejia said she was honored to play such an iconic role, first portrayed by Ethel Merman in 1946 and later by such powerhouse performers as Debbie Reynolds, Andrea McArdle, Betty Hutton and Bernadette Peters.

"She is a quick-witted, steadfast woman who has a level of innocence and authenticity that is never lost," Mejia wrote. "Being able to portray a character that is so versatile has not only been a challenge, but an experience you can only hope for when involved in musical theater."

Ever the showman on stage and off, Price praised his co-star's dress rehearsal performances of "Anything You Can Do," noting "Amelia hits a high note in that song, which has already shattered windows throughout the downtown area three times this week! Now that girl has some lungs."

Henry and Mejia both like the quieter moment of "Moonshine Lullaby," which also features the talents of Julie Verrel, Suzanne Stalkers and Callie Stein-Wayne.

"... My favorite moment in the show is while singing 'Moonshine Lullaby' to my 'younger siblings," Mejia wrote. "There is something really special about getting to share the stage with little ones and the tenderness they portray, so combining their emotions with singing from some of the best in our cast, gets me every time."

Along with an interesting bit of history, the show presents a study of how people get along in relationships, Henry said, from Annie and Frank struggling to compromise in their relationship because they have different goals and expectations to Buffalo Bill and Pawnee Bill, who each have business problems and must find a way to join their shows so they can continue.

Mejia added that the show teaches us that you don't need a medal to consider yourself a winner in life.

"Whether it’s finding love, being content with a newfound sense of confidence, or forming new partnerships, we all have a different view of what we feel is a win."

For Price, the win will be getting audiences out to see the showmanship up close.

"It's just a good old show, full of fun folks and slow-moving livestock. Just like us. So grab a pal, come on down and join the fun."

‘ANNIE GET YOUR GUN’