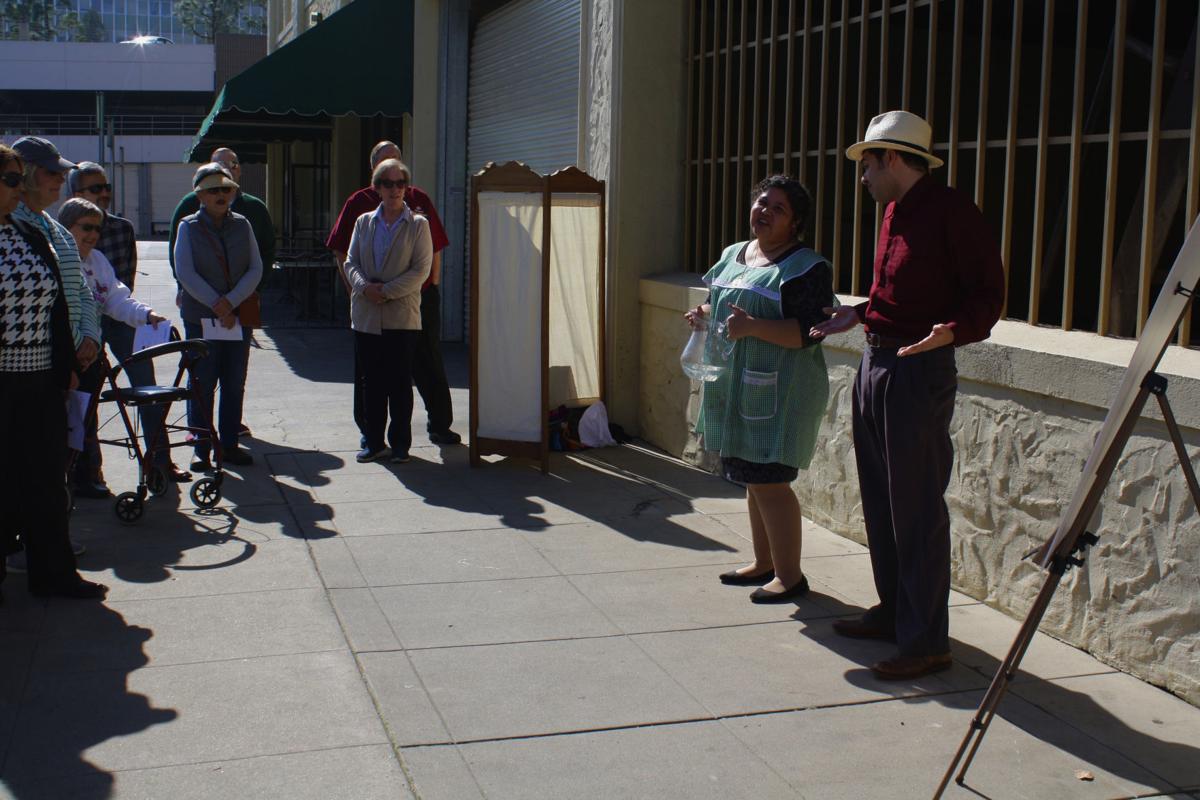 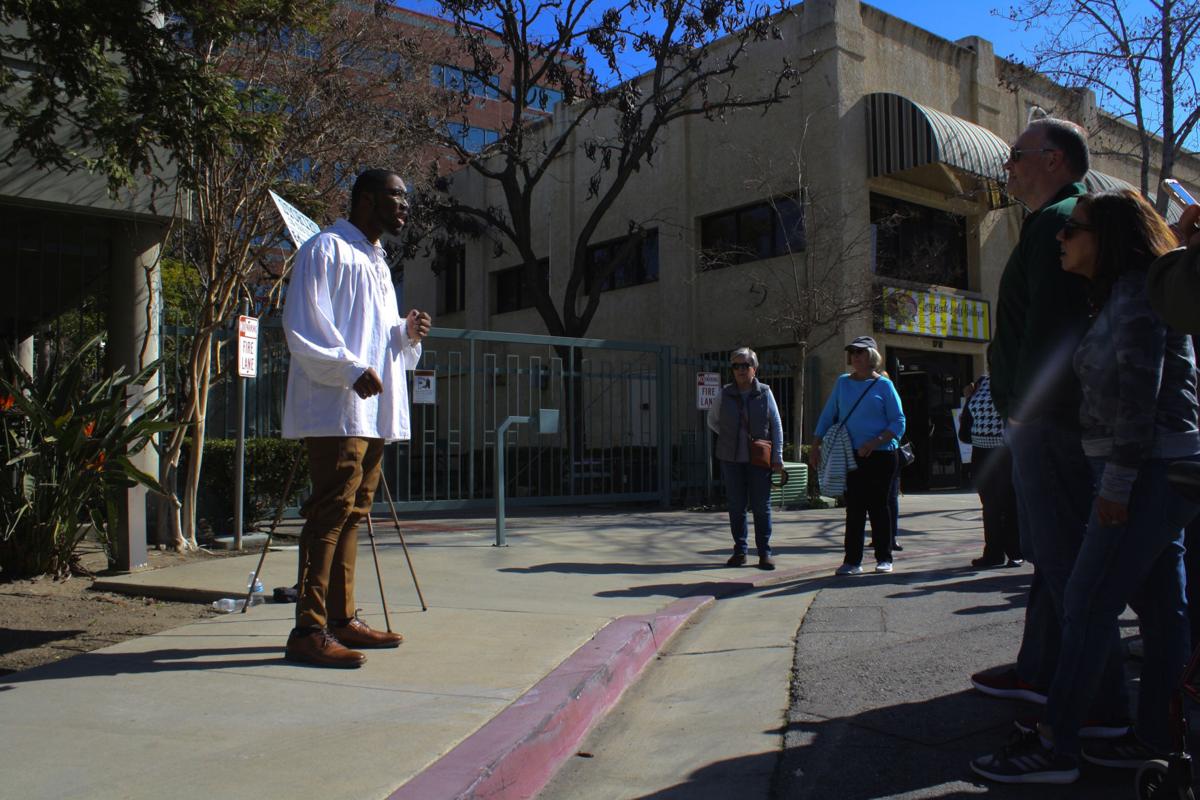 If you've maxed out on streaming programming and aren't ready to pick up another book, take heart. Stories on the Sidewalk, a walking tour bringing Kern County's history to life, returns this month for two days of entertaining local tales in downtown Bakersfield.

This is the third year for the event, taking place March 13 and 14, that depicts local historical figures and eras through brief live performances along K Street.

Katy Moore, a board member at the Arts Council of Kern, which puts on the event, said last year's Stories left quite an impression on her.

"To be able to go downtown when it is still relatively quiet, to see Bakersfield where it actually started, it helped me in some way to connect living here," she said. "That this is the living history of where we live."

Moore said the outdoor event only needed minor adjustments to address current COVID guidelines. Masks will be required and tour groups of 12 or fewer will remain spread out and at least 6 feet away from the performers, who won't be masked. The tour stops are also spaced out further to allow people to spread apart but still hear the performances.

As a transplant to Bakersfield, Moore is not as familiar with some of the people being depicted this year (see sidebar) but said she was very interested in the tales of the Dust Bowl migration and the 1918 Spanish flu pandemic.

"Those two were high on my personal list," she said. "The Spanish flu because it has a lot to do with what we’ve gone through (the last year) and the Dust Bowl migration. I'm not from Bakersfield so I wanted to know how did people flock here in the first place and why."

Writer Neill D. Hicks was also fascinated by the origins of the 20th century pandemic that killed millions around the world.

He tapped into research from a novel he's currently writing to put together his scene.

"We know more about the cause of the medieval plague than we do about a virus that killed as many as 100 million people in the world," he wrote in an email.

He said the history of how the influenza strain got its name is a bit of a mystery.

"What seems to be certain is that the flu began in the USA at Army Camp Funston in Kansas. American doughboys took the flu to Europe, and brought it back after the war."

And the timeliness of his topic was not lost on him.

"Many of the same political and social denials were at work in 1918-1919. As a consequence, the flu came in several waves taking advantage of expedient policies that lifted restrictions too early."

Much like history itself, Stories is a mixture of somber moments and levity.

Robert Price, who wrote his piece about country musician Fred Maddox, said he was taken by the performer's "plain-spoken, self-deprecating charm" that was evident in an old interview Price saw.

"The guy was flat-out hilarious and had an amazing personal story," Price wrote in an email. "We throw around terms like 'rags to riches,' but that’s literally what he and his siblings experienced — from barefoot and destitute to musical innovators and cultural trendsetters, perhaps only recently acknowledged as such."

Performing with his siblings as Maddox Bros. and Rose up until the 1950s, Maddox pointed out they were "playing rock ’n’ roll back when Elvis was still in short pants.”

And although Price did double duty last year, performing as Tejon Ranch owner Ger. Edward Fitzgerald Beale in a scene he wrote, his acting was not required this year. (Alex Mitts plays Maddox.)

"I volunteered ... But the Arts Council said no thanks this year. I guess that’s the ultimate critical review."

While Price praised the musical exuberance of his subject, fellow writer Lois Henry too channeled the charisma of Avelino Martinez, a horse handler for the notorious bandit Joaquin Murrieta, longtime vaquero for Tejon Ranch and "a guy who counted on his horse to get him home from the bar."

She wrote, "The most infamous part of his life was his time in the Murrieta horse gang. But Avelino was really a regular guy whose greatest sense of pride and accomplishment was in being a vaquero, working the ranches and being productive.

"So I tried to capture him later in life, reminiscing about the bandidos but not glorifying them and then boasting about how he was going to lead the Visalia parade at over 100 years old."

Even though his subjects lived hundreds of years apart, Louis Medina said he found a connection that inspired his two scenes.

"Both Cesar Chavez and Father Garces were men of faith," he wrote. "Their religion, Catholicism, was a big part of their lives. I really wanted to have their faith journeys and sacrifices stand out in the pieces I wrote."

He was drawn to the story of the civil rights activist and labor leader when he joined the project last year. Then the opportunity to also tell the history of the Franciscan friar and missionary who made a fateful journey in 1776 through what would become Bakersfield arose later.

Medina hopes attendees will be inspired by the event to learn more about Kern's history.

"Stories on the Sidewalk can be a springboard into new biographical adventures into the lives of people who have something special in common with each of us; after all, they once lived in the very same place we call home!"

Henry agrees that the tour is a great way to pique the community's interest in the past.

"Kern County is so full of interesting, inspiring historic figures. Stories on the Sidewalk really help bring them to life and I hope the community continues to support this great event."

Stories on the Sidewalk

What: A fun, educational downtown walk through Bakersfield history

Where: Check-in at the Betty Younger Sculpture Garden, 1330 Truxtun Ave.

Admission: $10; tickets can be purchased at kernarts.org

Note: This event may contain some adult language and is not recommended for children under 8 years old

Who's who in Stories

There are nine stops for this year's Stories on the Sidewalk with each exploring a different person or topic from Kern County history:

Cesar Chavez: Labor leader and civil rights activist. Portrayed by Bobby Gamez in a scene with the Virgin of Guadalupe (Natalia Mercado); written by Louis Medina.

Dust Bowl migration: Discussing the great migration of hundreds from Oklahoma, Arkansas and Texas who headed west to escape the Dust Bowl, an ecological disaster that struck the southern Great Plains. Portrayed in a scene with fictional characters Great-Gramma Thelma (Verda Varner) and Caitlyn (Varner's granddaughter); written by Andi Hicks

Fred Maddox: Country musician best known for performing with his siblings as the Maddox Brothers and Rose from the 1930s through the '50s. Portrayed by Alex Mitts; written by Robert Price.

Spanish Flu epidemic: 1918 influenza pandemic that killed millions, infecting about a third of the world's population in four waves over two years. Discussed in a scene between Leonard Atkins (Perrin Swanson) and Sarah (Kelsey Morrow); written by Neill D. Hicks.