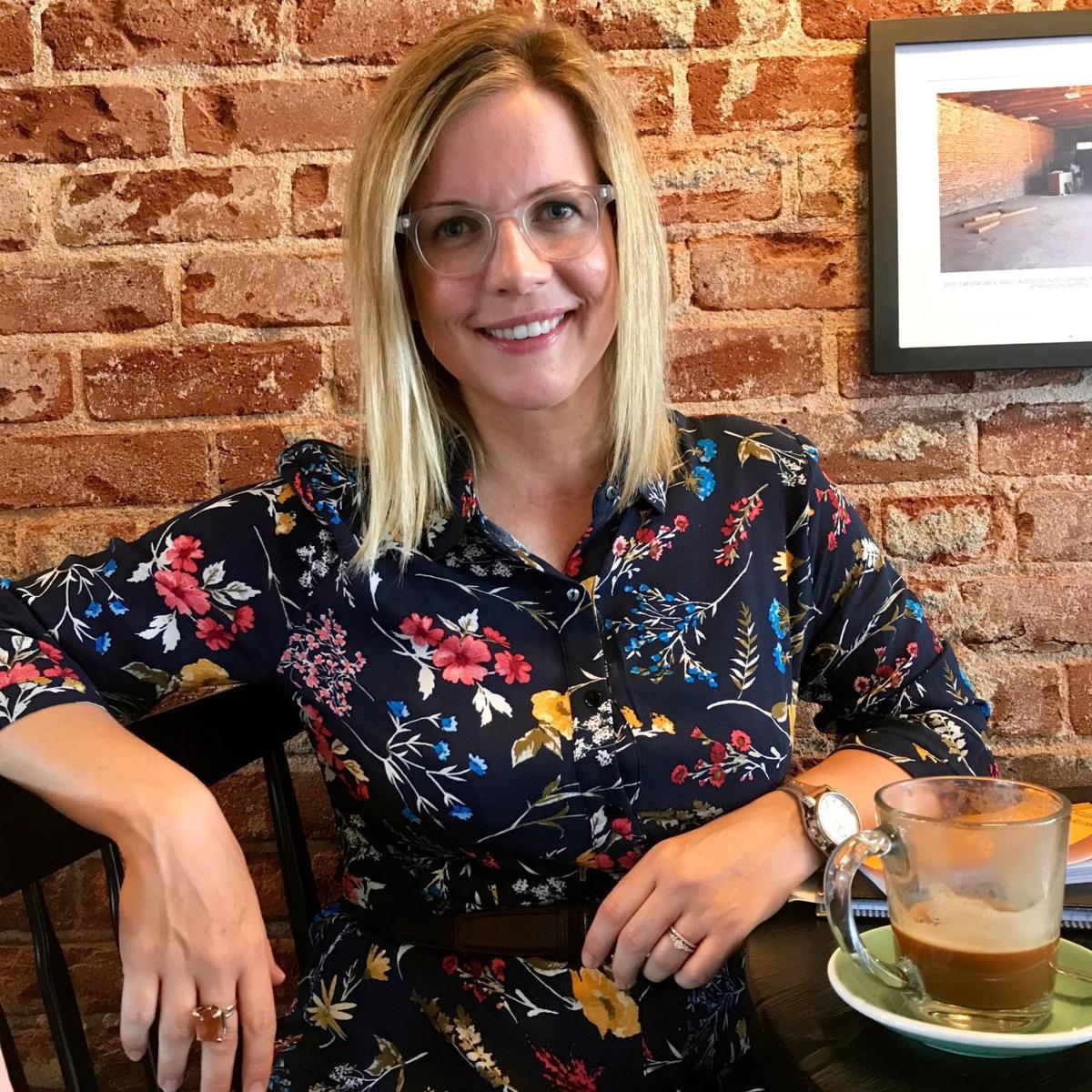 Jennifer Sampson, seen here in 2017, is finalizing a book of her collages titled "Cut It Out: Collage Art in Ten Acts." 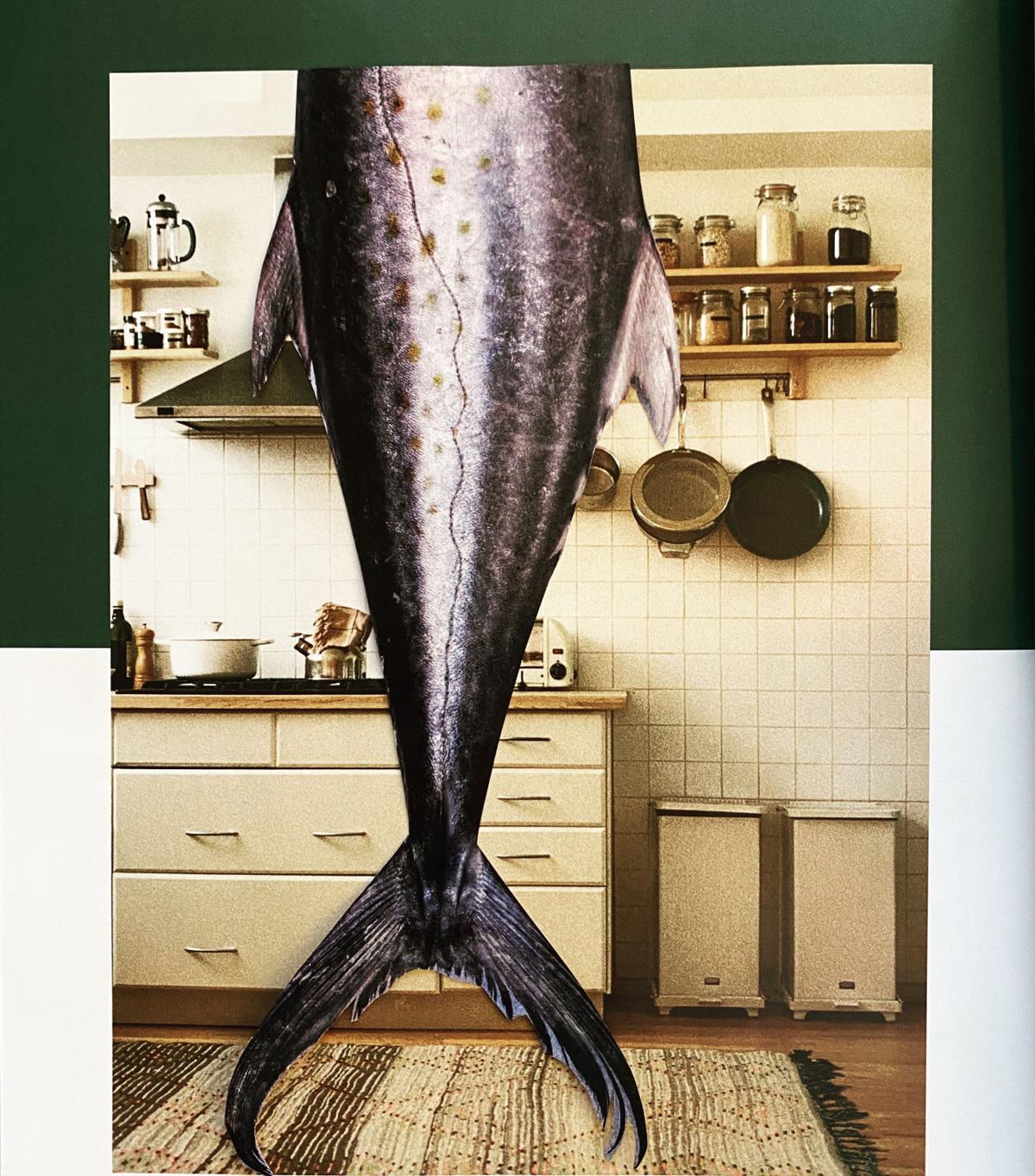 The collage "Something's fishy" by Jennifer Sampson, who is finalizing a book of her art titled "Cut It Out: Collage Art in Ten Acts." 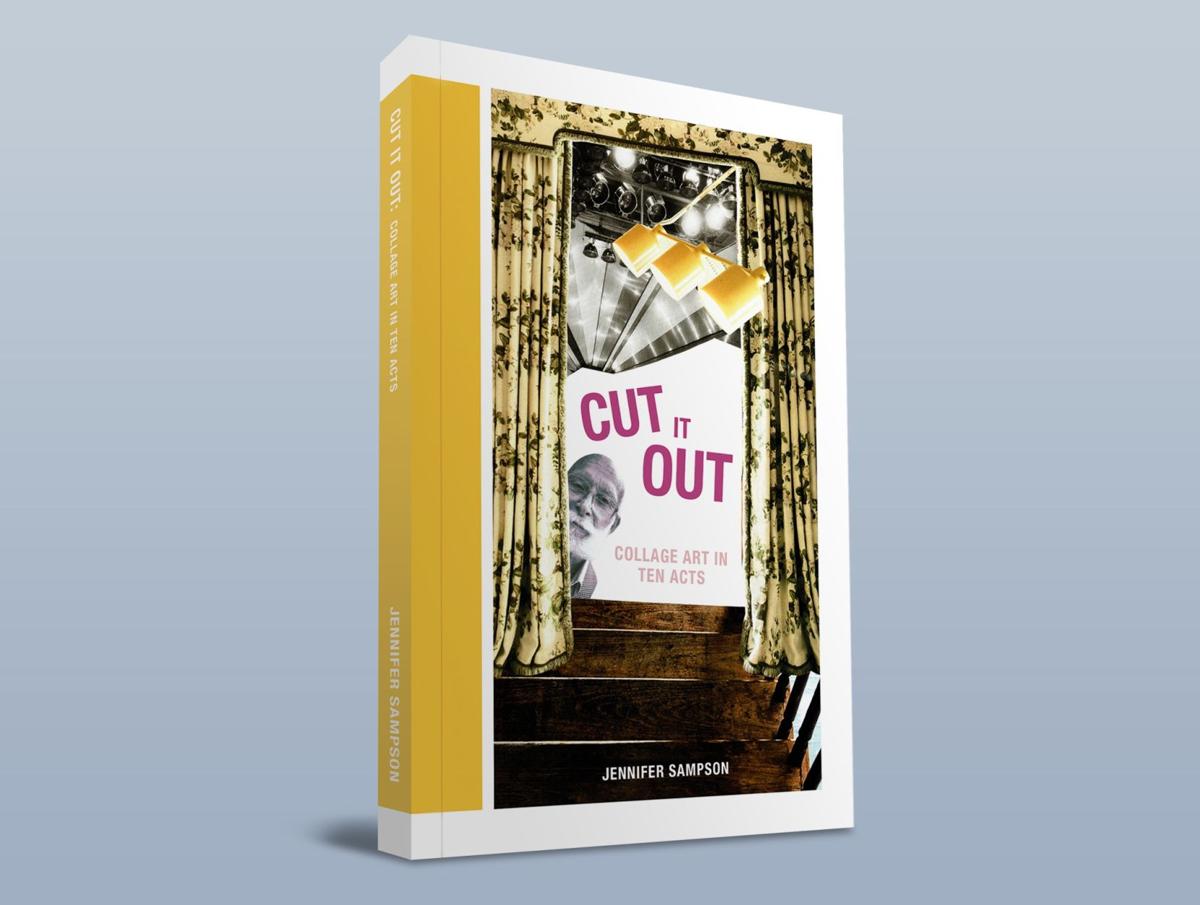 The cover for "Cut It Out: Collage Art in Ten Acts" by Jennifer Sampson features cover art by Sampson and graphic design by local artist Erwin Ledford. 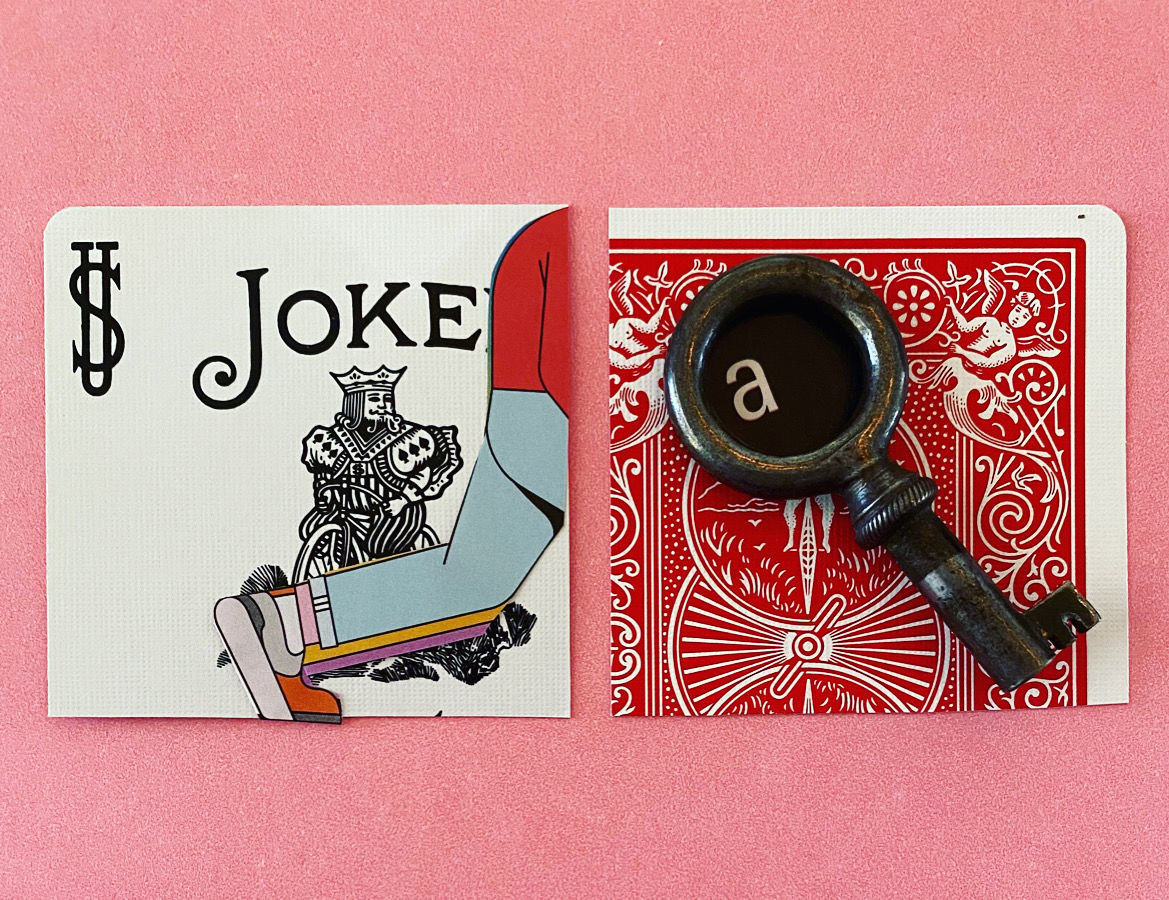 "What a card" by Jennifer Sampson, who is finalizing a book of her collages titled "Cut It Out: Collage Art in Ten Acts." 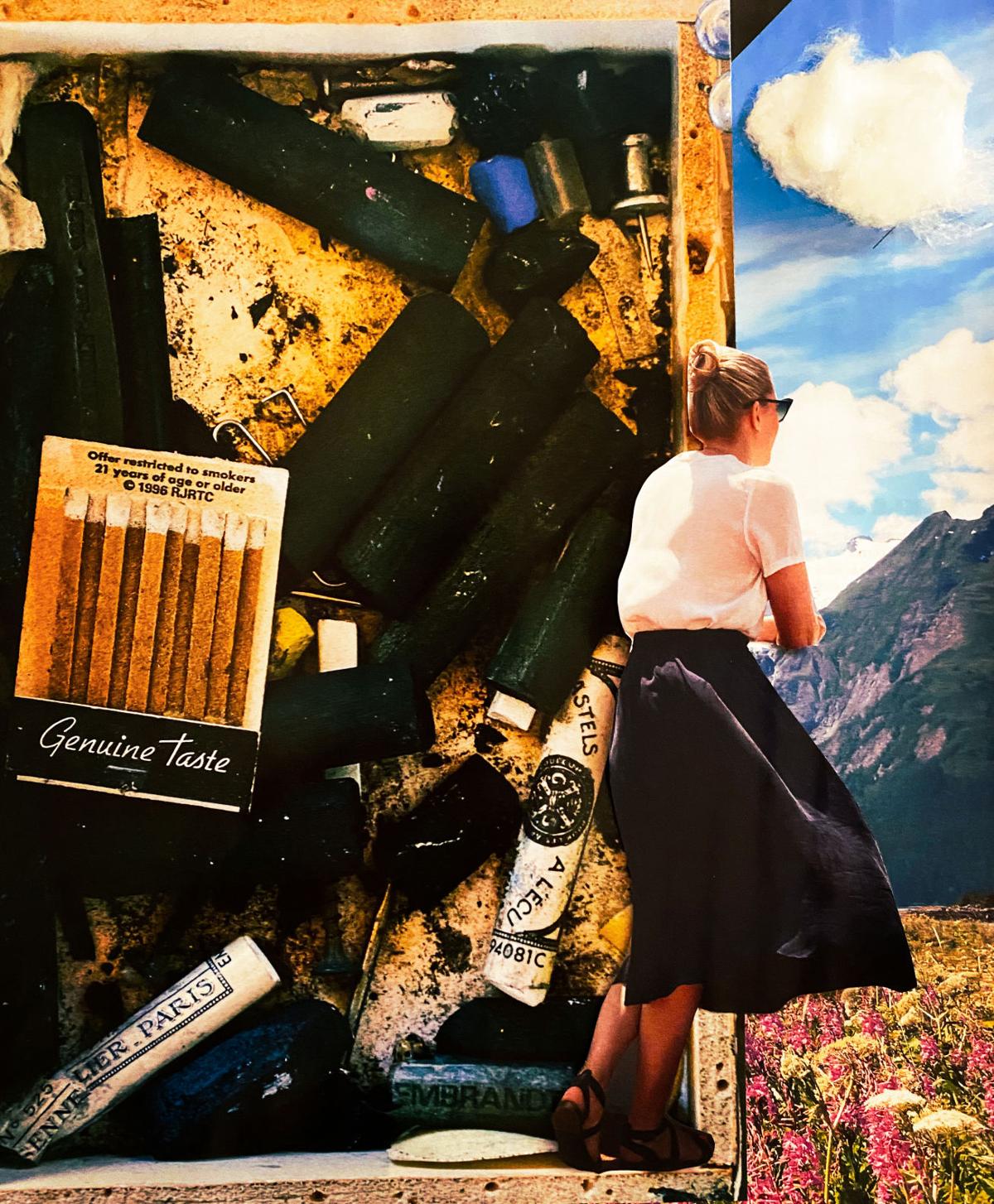 "Don't make me leave my art room" by Jennifer Sampson, who is finalizing a book of her collages titled "Cut It Out: Collage Art in Ten Acts."

Jennifer Sampson, seen here in 2017, is finalizing a book of her collages titled "Cut It Out: Collage Art in Ten Acts."

The collage "Something's fishy" by Jennifer Sampson, who is finalizing a book of her art titled "Cut It Out: Collage Art in Ten Acts."

The cover for "Cut It Out: Collage Art in Ten Acts" by Jennifer Sampson features cover art by Sampson and graphic design by local artist Erwin Ledford.

"What a card" by Jennifer Sampson, who is finalizing a book of her collages titled "Cut It Out: Collage Art in Ten Acts."

"Don't make me leave my art room" by Jennifer Sampson, who is finalizing a book of her collages titled "Cut It Out: Collage Art in Ten Acts."

There’s that old adage about lemons and lemonade but for Jennifer Sampson it’s collages that she’s making with the cards life has dealt her. The born storyteller, sidelined by illness, has found a fresh creative outlet, which has allowed her to not only connect with a growing online community but led to an opportunity to reach readers through a new book.

Later this summer, Sampson will release "Cut It Out: Collage Art in Ten Acts," which she describes as “a collection of playful and unique collages from a theatrical perspective.” The project was made possible through a gift grant from the Doug and Laurie Kanyer Art Collection, originally focused on preserving the work of Central Washington artists and now expanding to collage artists from around the world.

Sampson never imagined that she would be drawing attention with her artwork, describing herself as having "zero experience" in visual arts.

"I think I took an art class in high school," she said. "I was the one who always spilled my paint and dropped the pottery."

Her focus was theater and she was prolific. The freelance theater artist worked with theaters and schools in Chicago, Denver, San Diego and New York City. With a Master of Fine Arts from the University of San Diego/The Old Globe Theatre program, Sampson directed and taught acting courses at The Dalton School, John Jay College of Criminal Justice, The Youth Summer Theatre Institute of NYC, La Jolla Playhouse and Cal State Bakersfield.

She was in the middle of a number of projects in 2017 when she fell ill.

"It was such a shock because I was going, going, going. I had two shows at the museum, symphony (show) pitches and had 'Hamlet' fully cast, and equity contracts signed. The entire show was funded."

Coming down with mononucleosis for the third time in her life, she had to step away from her work and focus on her health.

"It feels like you’re sinking. I've had it before and I got over it."

But this time it was different. Diagnosed with chronic mononucleosis, everything changed as the illness left Sampson exhausted, stuck in bed for hours.

She said, "There is no treatment and it can lead to more challenging health issues. There is no question of pushing through it. There are times when I literally just can't stand up. It's a whole different world."

The diagnosis was a terrible blow for Sampson, who said she took about a year to grieve what was lost to her and learning how to manage her "new normal." Focusing her depleted energy on being a cheerful mom to daughter Lillian and present and loving wife to husband Jon, Sampson didn't foresee any more creative pursuits.

Like life, art finds a way, and so it was with Sampson who got into collage just over a year ago.

"A year ago I started cutting and pasting, and just noticed my entire body relaxing," she said. "I felt this joy, a silliness, a playfulness."

Subjects included living with illness, feminism, family life and domestic and social issues. She used paper scraps, magazine clippings, old letters and cards, found materials from nature and other ephemera for her pieces.

She said, "I love actual materials, working with my hands. ... I like to challenge myself and use what i have."

Initially Sampson kept her work under wraps: "I was very embarrassed in the beginning. I thought it was just some hobby that was keeping me busy."

Slowly she started sharing with friends, one of whom — Josh Fitzpatrick, former pastor of Wellspring Free Methodist Church — encouraged her to create an Instagram for her creations.

She started a page (@scissorsandstories) last March and started connecting with other creatives.

"I have found out through IG there is a whole world of collage artists," she said. "It is its own unique group of people, artists and collectors. I've learned so much about it."

That's where Laurie Kanyer comes in. An artist as well as collector, she and her husband seek out art for preservation.

In light of the pandemic, the couple have also branched into gift grants, aimed at supporting artists who are creating something uplifting to share with the world.

The previous recipient, New Jersey collage artist Kiki Buccini, used her grant to make and send fine art “gift” collages to essential workers and others. Buccini will then track how the gifts might improve the well-being of receivers.

Finding positivity in Sampson's work, Kanyer reached out to the local artists.

Sampson said, "She told me, 'Most artists have a similar style. Yours are mostly story-based and look different."

"Her witty, while deeply serious, collages often have important messages or lessons," Kanyer said in a news release. "I imagined a gift book filled with her collages. It was as if I needed these collages in a book to help support my wellbeing and affirm my beliefs."

Upon learning Sampson was living with a life-altering illness that restricts her daily life, Kanyer was committed to offering her a grant to make the book a reality.

Sampson describes "Cut It Out" as a narrative mixtape, told in 10 acts.

"It takes you on that ride, different notes hit you just right. It's what a play should do, what a story should do, and I hope that's what the book does."

She enlisted local artist Erwin Ledford to help with the graphic design of the cover, which features her collage of a stage.

The book is due out in late August or early September. Beyond its release, Sampson would love to connect with the BMoA on a collage exhibition and possibly collaborate with other artists.

For now, she is joyfully celebrating this opportunity with loved ones.

"I was just praying, I know that this is not going away," she said of her illness. "If something good could happen that would be great. I feel really blessed."