You are the owner of this article.
Edit Article Add New Article
Home
News
Sports
Marketplace
Bakersfield.com
1 of 10 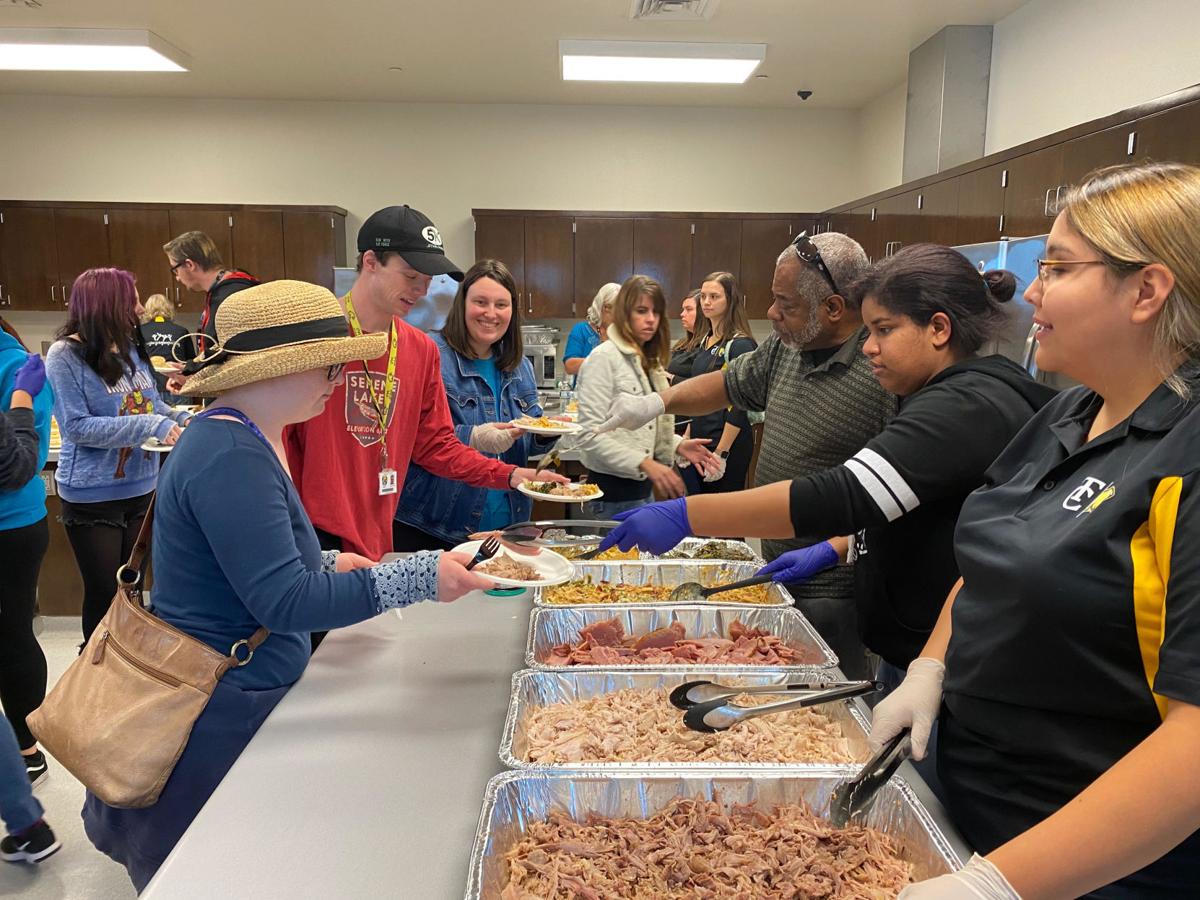 TIL Program students and staff enjoy a Thanksgiving meal organized by Nekol Dummett, a freshman. 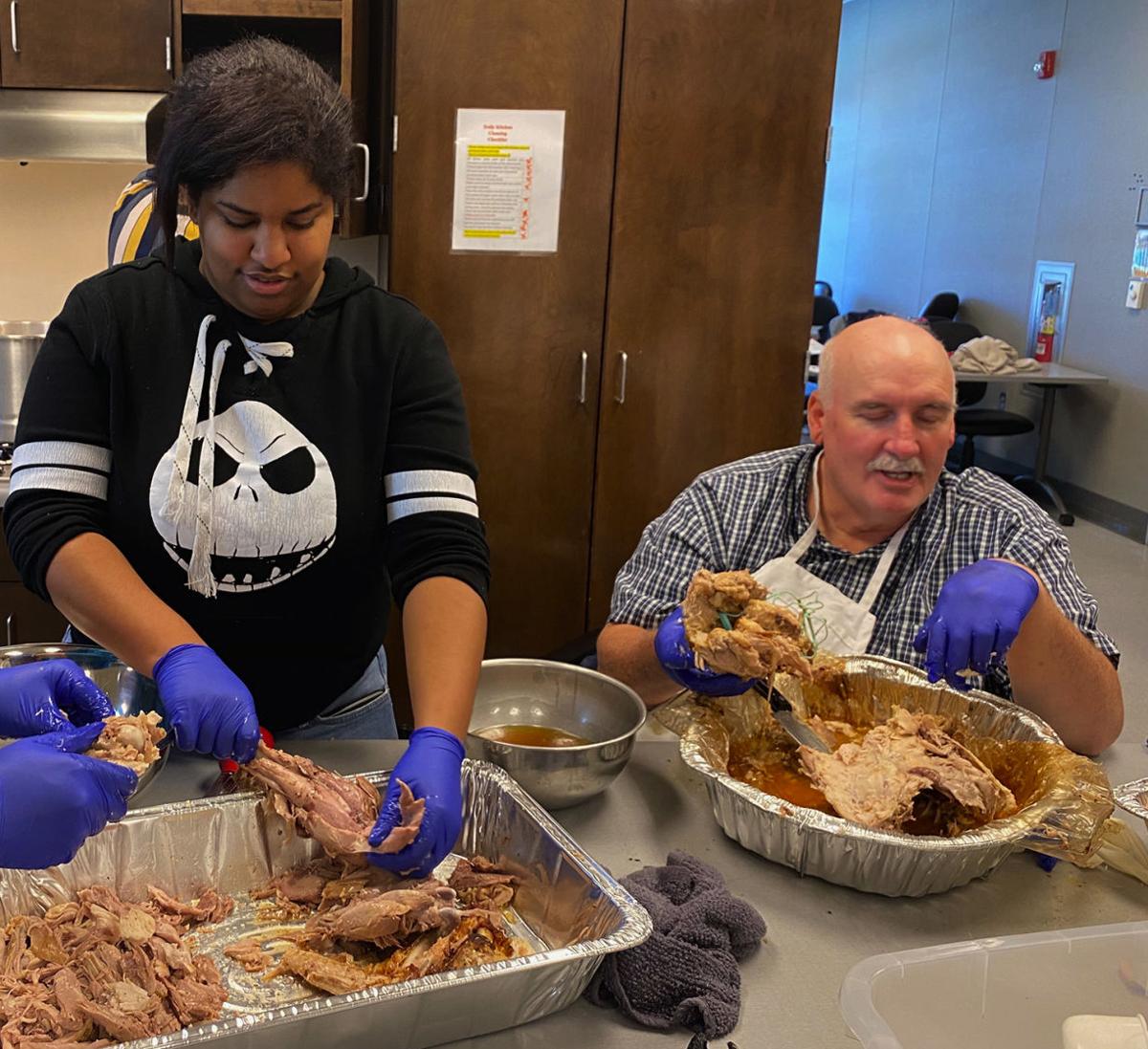 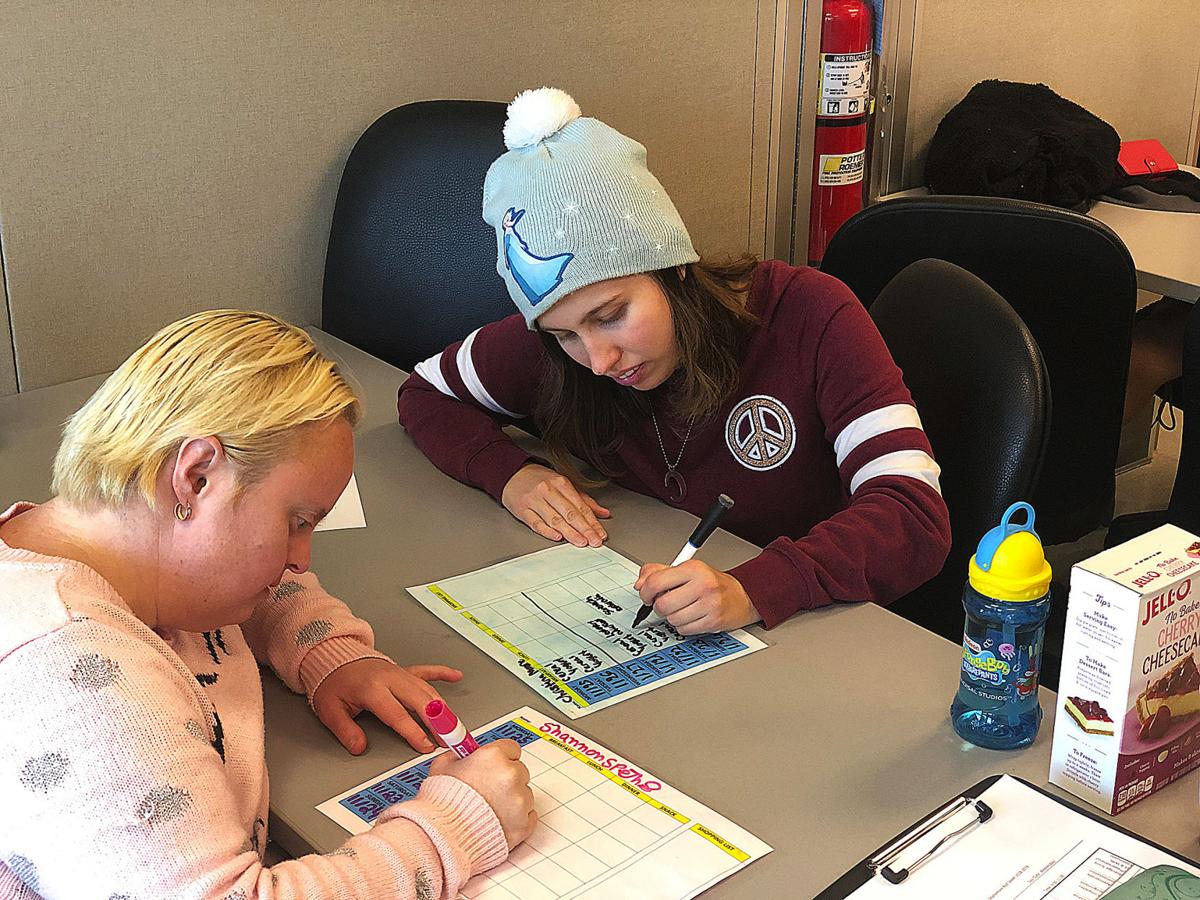 TIL Program sophomores Shannon Speth, left, and Christina Moore plan their meals for the upcoming week. 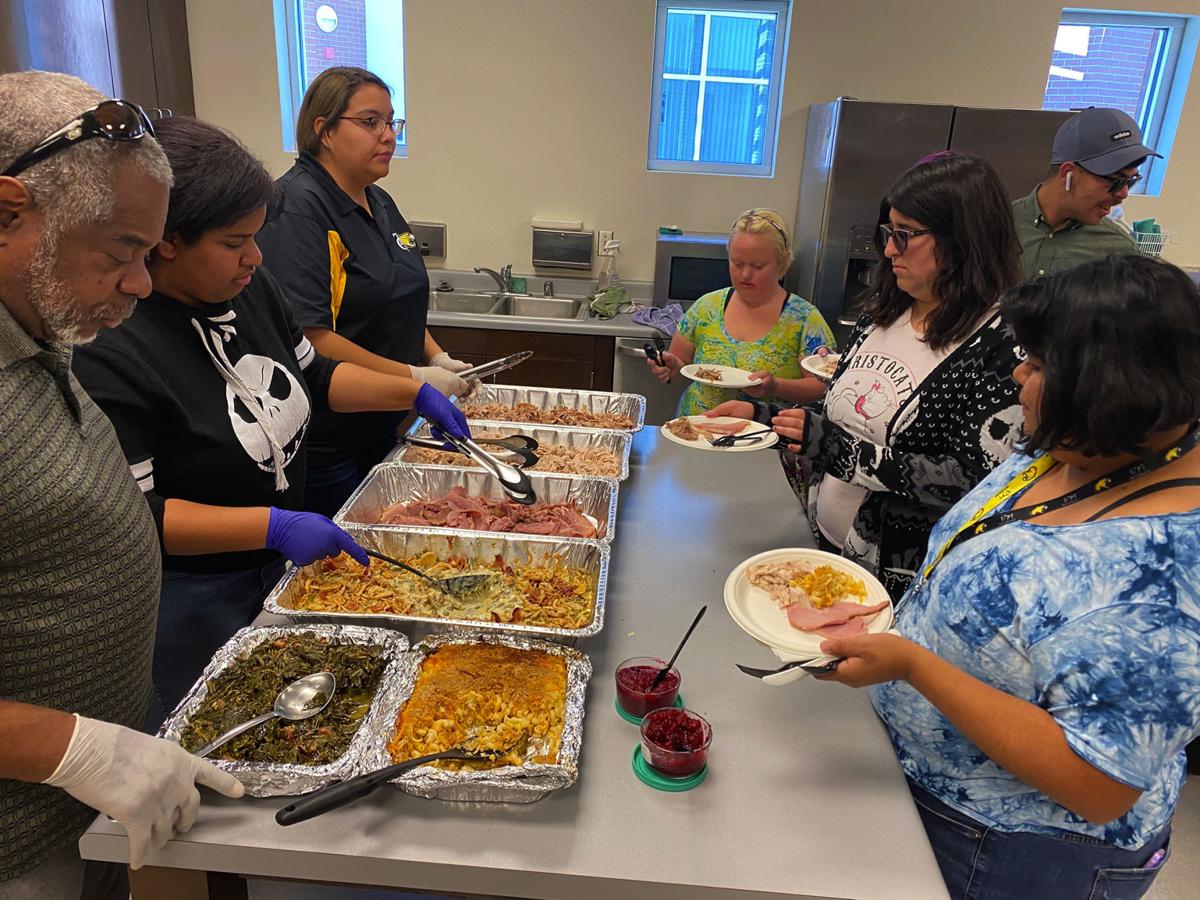 TIL Program students and staff enjoy a Thanksgiving meal one student prepared for them Friday. 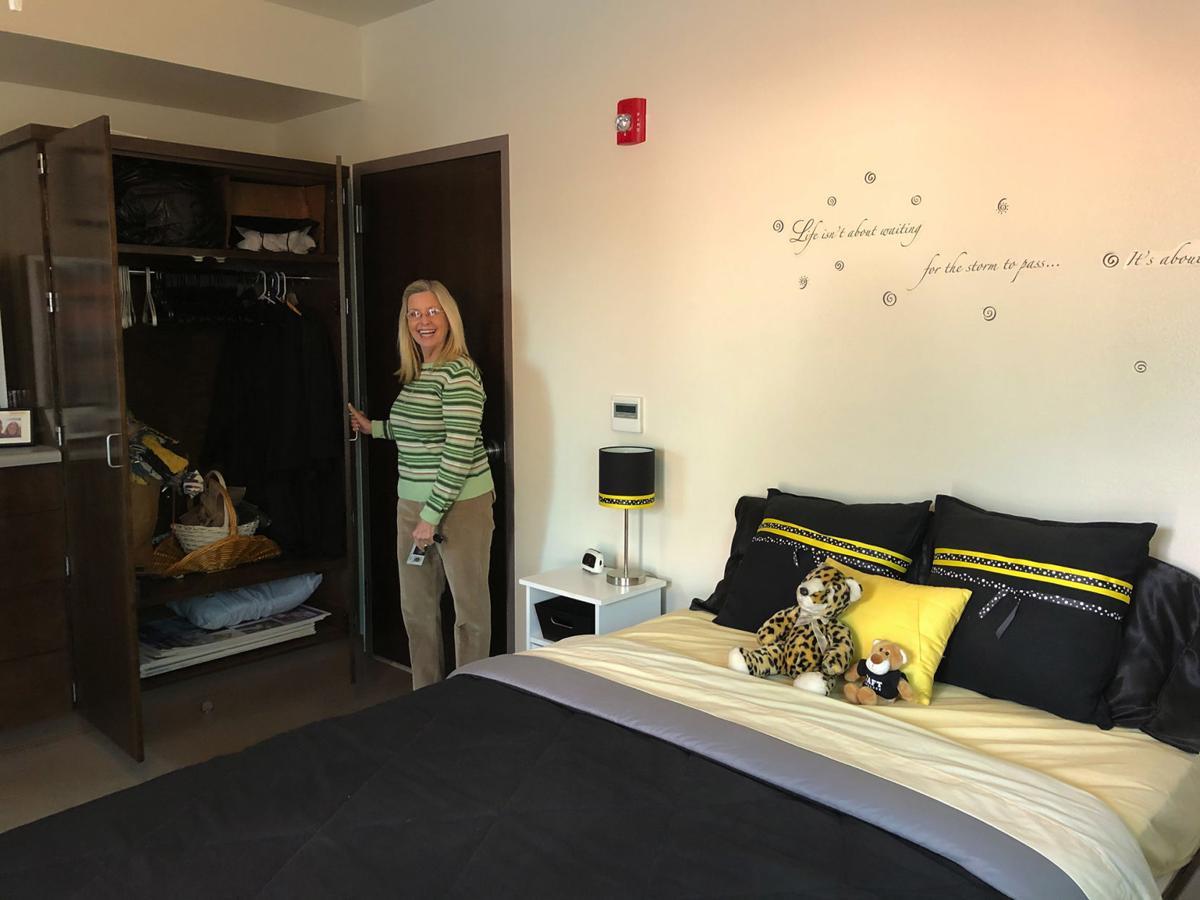 Intake billing technician Vicky Waugh gives a tour of one of the dorm rooms TIL Program students live in during their freshman year. 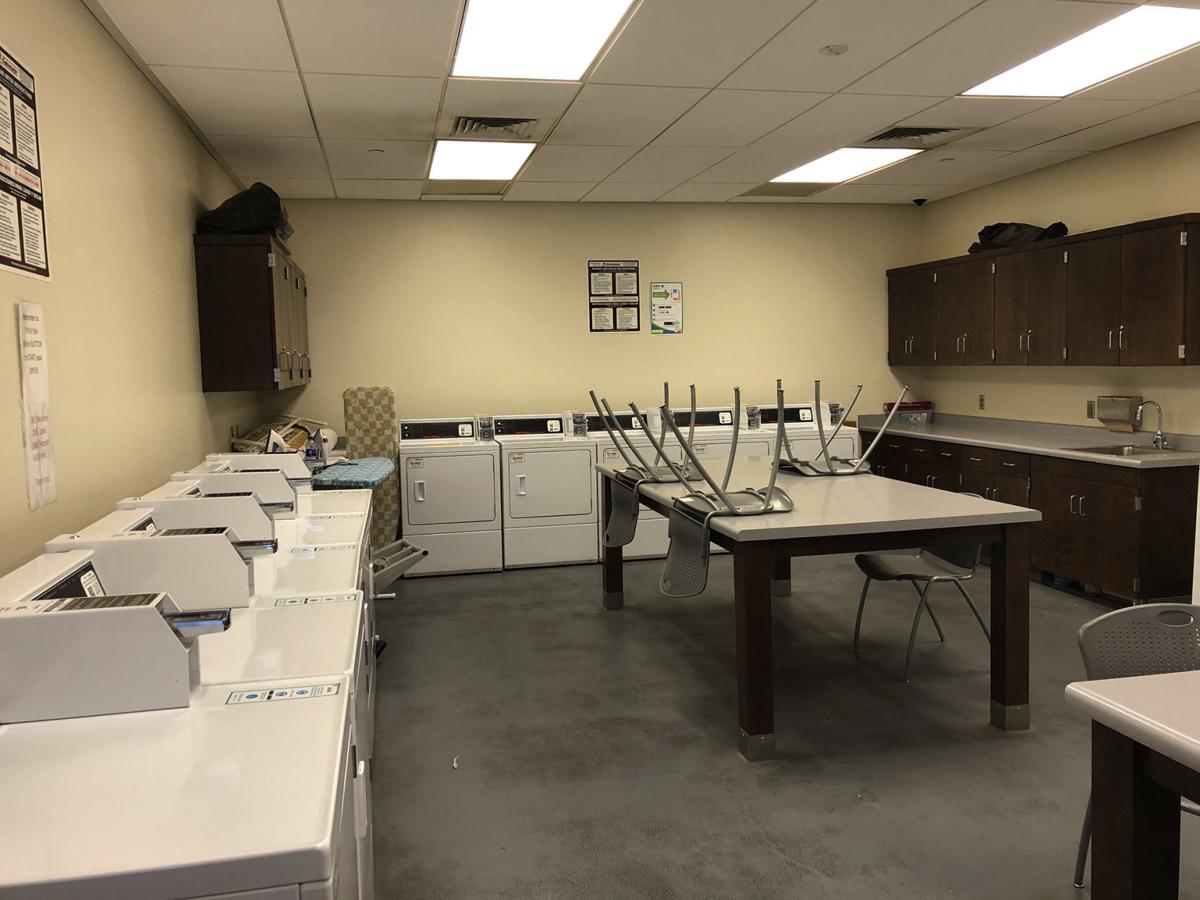 TIL Program students learn how to do their laundry while they are students at Taft College. 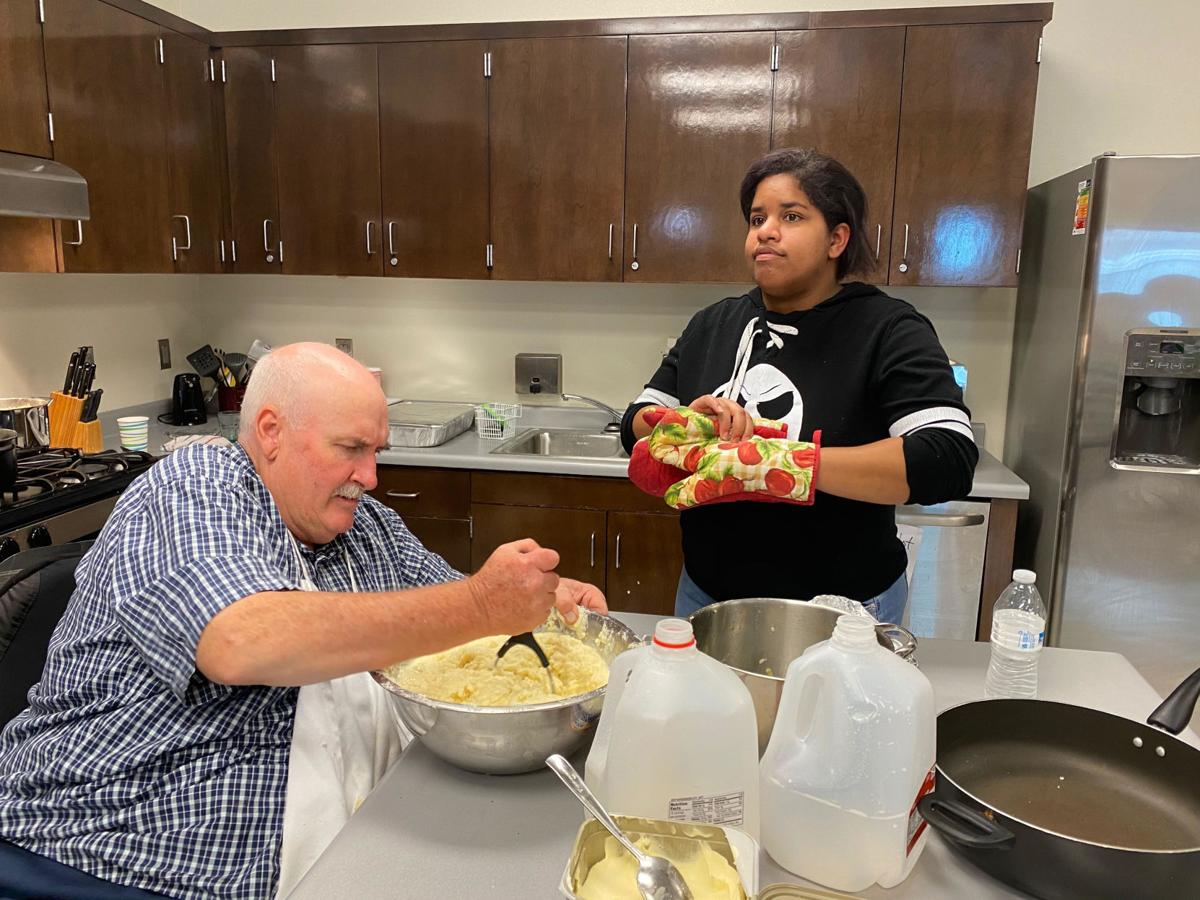 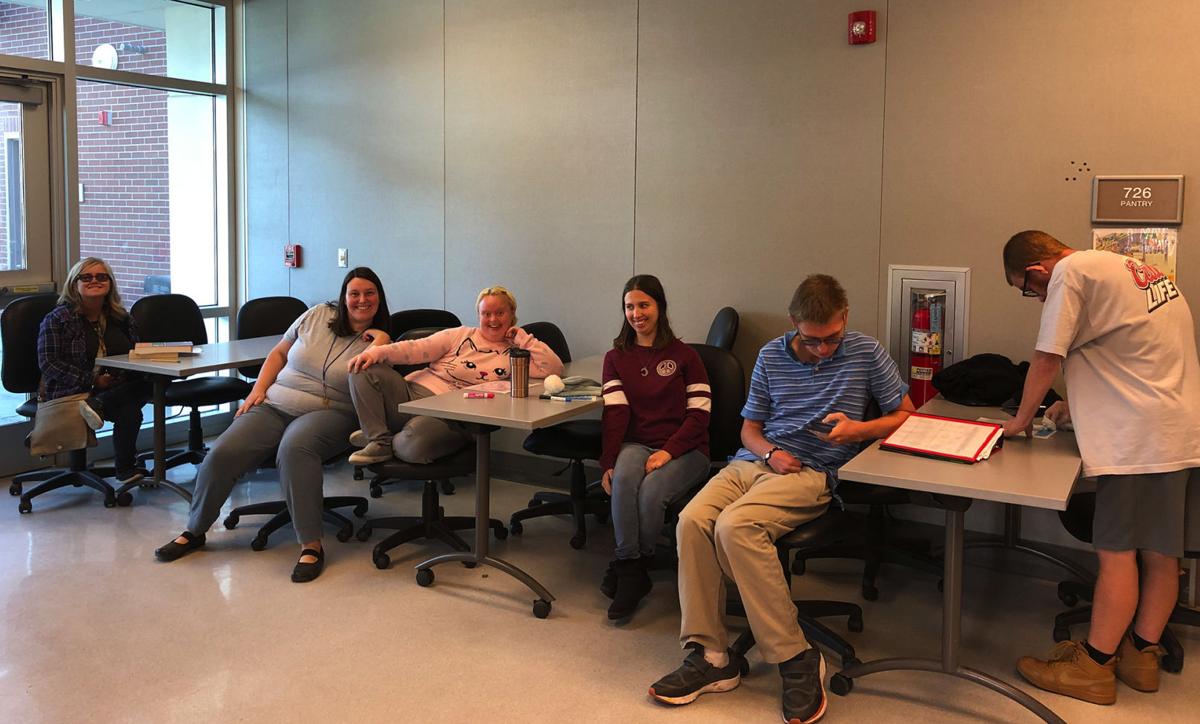 TIL Program students wait for their cooking class to begin Friday at Taft College. 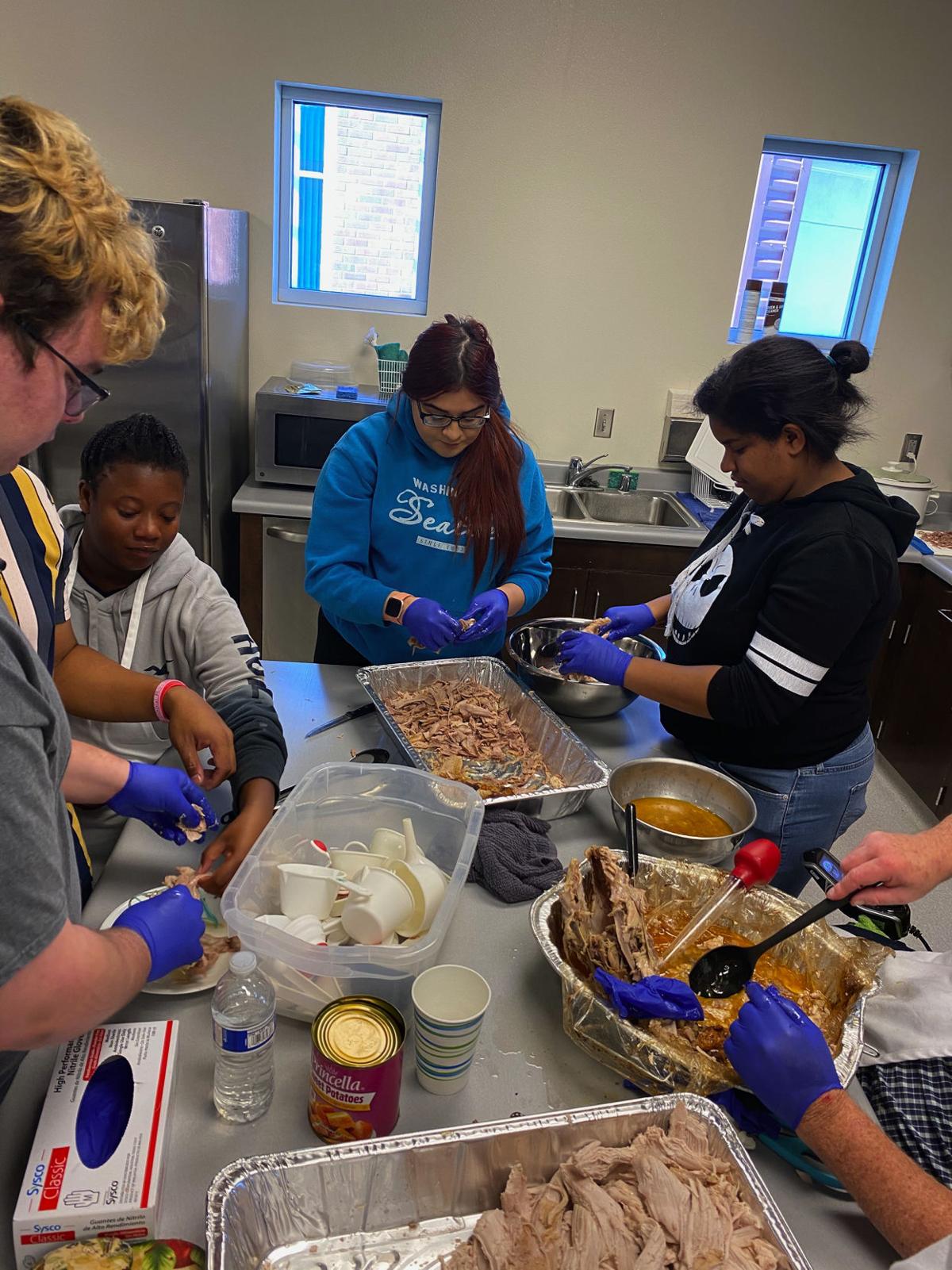 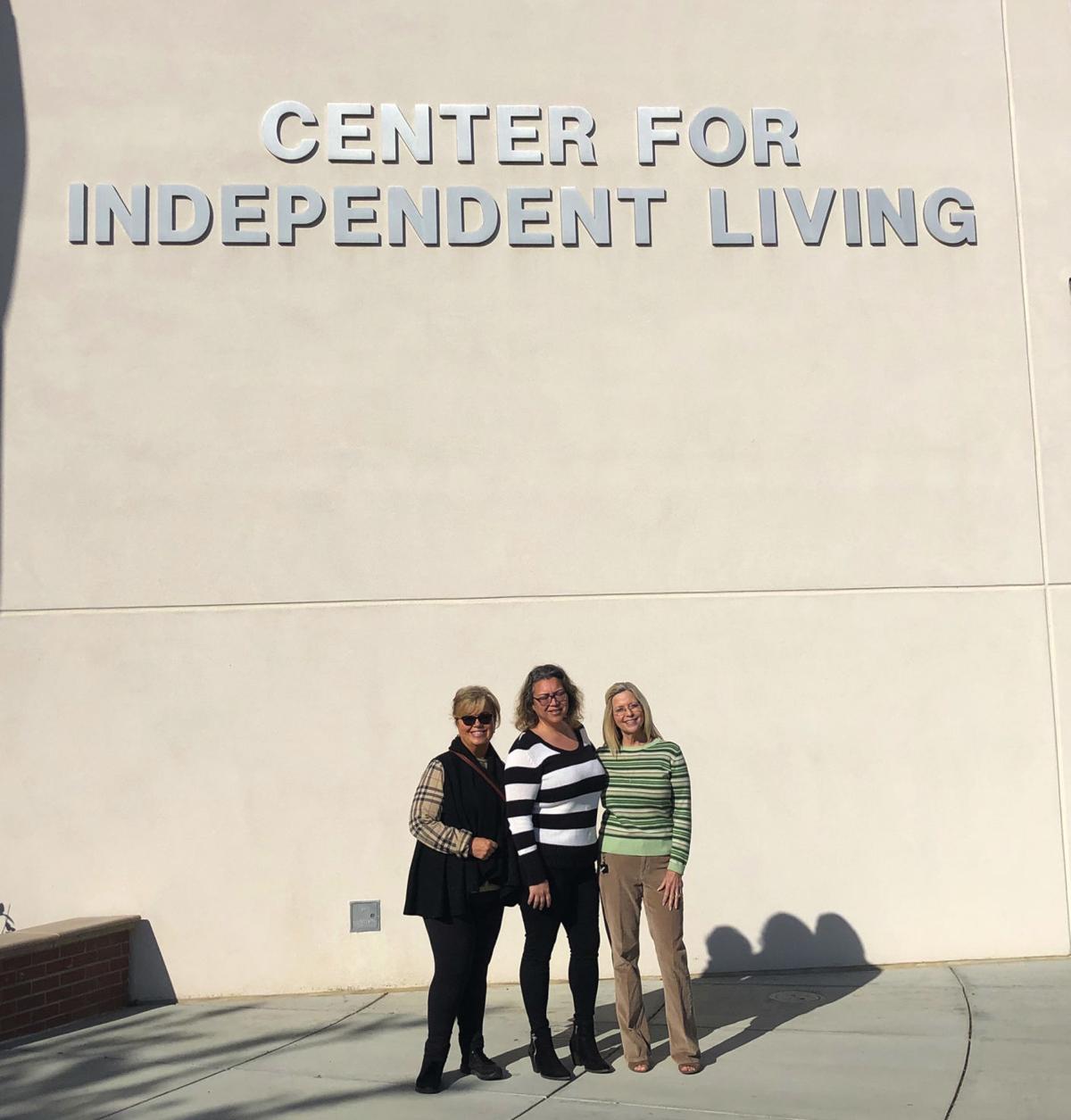 TIL Program students and staff enjoy a Thanksgiving meal organized by Nekol Dummett, a freshman.

TIL Program sophomores Shannon Speth, left, and Christina Moore plan their meals for the upcoming week.

TIL Program students and staff enjoy a Thanksgiving meal one student prepared for them Friday.

Intake billing technician Vicky Waugh gives a tour of one of the dorm rooms TIL Program students live in during their freshman year.

TIL Program students learn how to do their laundry while they are students at Taft College.

TIL Program students wait for their cooking class to begin Friday at Taft College.

Taft College freshman Nekol Dummett had a plan to cook up something special for classmates and staff members for Thanksgiving this year.

With an early wake-up call Nov. 20, she, her peers and family members were on a mission to serve up two turkeys, a ham, a variety of side dishes and, of course, dessert.

Her parents encouraged her to make a feast of some sorts, but when the idea got into her head, she decided to make it the way she wanted.

And the results were quite delicious.

One of Taft's staff members "wanted us to be together right before Thanksgiving starts, so I was thinking about that," Dummet said as she was getting ready for the gathering.

But the confidence to organize an event and actually make various dishes came from the Transition to Independent Living Program.

TIL is a post-secondary educational experience for adults who have developmental/intellectual disabilities where they learn how to live independently, take care of themselves and navigate finances, cooking, housework and other activities.

"It makes me proud to think about her initiating that and following through," said Director Aaron Markovits. "Students have great ideas, but to actually follow through is huge."

It's been 24 years of success in the Central Valley, and now TIL is getting ready to share its story on the international stage at the United Nations Office in Austria next year.

TIL opened in 1995 with funding from the Kern Regional Center. Though similar programs exist elsewhere, it is the only one found on a college campus and students actually live on-campus their first year, Markovits explained.

More than 300 students from all over the state have participated in the program, he said, and there are around 50 enrolled this year.

The transition to living on their own begins almost as soon as students arrive on campus and move into their dorms freshman year.

There are two approaches to learning: traditional classroom instruction and hands-on activities. Students take classes in personal advocacy, finance, health and interpersonal relationships, and then they apply what they learn in their dorm room, or their "living classroom."

"Housekeeping, laundry, all the stuff you have to do to be successful," said Markovits.

They are also introduced to the kitchen where they learn safety skills, how to use knives, different utensils, a stove and oven and various recipes. Students have a meal plan as freshmen so they are not too dependent on mastering cooking immediately.

By sophomore year, students move off-campus into rental housing and really get the independent living experience. The skills taught freshman year — cooking, housekeeping, laundry, budgeting — come into play with almost every activity they do.

Markovits said students are also utilizing the public transportation system in Taft when they go grocery shopping, head to the movies and plan their trips back home. Both years they also hold paid internships on-campus or at local businesses.

"It’s rare that students with intellectual disabilities have the opportunity to participate in a program like this," he said.

Though they're only enrolled in the program for two years, results have been nothing short of astounding. Around 68 percent of students are living independently and around 75 percent are working, according to Markovits.

He believes numbers would be higher if the cost of living was not so expensive in the San Francisco and Los Angeles areas, where many students hail from.

'They're brilliant in so many ways'

When students begin their cooking classes at TIL, instructor David Powell sees many have don't have the necessary knife skills they need, and some are even afraid of the stove and oven.

"When they open up the oven, it’s like a big ol’ monster to them," he explained.

But he starts off slowly with them, making sure they are comfortable as they progress through the kitchen.

First comes safety skills and learning how to use the microwave, stove, oven, dishwasher and other appliances. Then students begin identifying pots and pans and how certain utensils are used.

They then transition into baking so they can learn measurements and how to follow recipes before they take on cooking.

"As you work with them, the lightbulb comes on and instead of telling them where things are and what measurements to have, they have their measurements out and their recipe," Powell said.

At the beginning of the semester students wrote down what recipes they would like to make and now they get to try their hands at one every Friday. Some of those have included pizza made from scratch, chicken Alfredo, orange chicken and mac and cheese.

This has been one of Dummett's favorite aspects of the TIL Program — challenging herself creatively and seeing what she can do in the kitchen.

"Being able to be in here and learn how to make pizza, chicken Alfredo, I was very impressed with myself that I was able to make that," she explained.

It's just one of the successes seen among students over the years, explained Sheri Horn-Bunk, executive director of foundation and instructional advancement for the Taft College Foundation.

A few years ago, one of Horn-Bunk's colleagues was having problems with her computer, and no one seemed to know what the issue was or how to fix it.

That is until one student — who had an internship with the informational technology department on campus — tried his hand at it.

"Did you know iTunes is loading every time you turn your computer on and it's slowing everything down?" she recalled him saying.

Everyone was blown away that he found a solution so quickly, she said.

"They’re brilliant in so many ways."

With so much success over the years, it was only a matter of time before TIL received international recognition for helping individuals with disabilities achieve their dreams.

The Zero Project, an initiative of the Essl Foundation, focuses on the rights of persons with disabilities globally. In conjunction with the UN Convention on the Rights of People with Disabilities, it has invited TIL to attend its annual conference at the United Nations Office in Vienna, Austria.

More than 600 participants from more than 70 countries will convene at the United Nations Office to discuss with world leaders, from all sectors of society, solutions and methodologies that represent concepts that work, according to a news release.

"Pakistan, Iran, India, Taft, we’re all going to be there," Horn-Bunk said. "We get to present to a worldwide audience and share best practices ... it’s about creating zero barriers around the world for people with disabilities."

The TIL Program was selected as one of the top presenters in educational practices for this conference.

"Taft College is proud of the work that we do in the Transition to Independent Living program to support the advancement of persons with intellectual disabilities, and we are honored to be recognized in this way," said Debra Daniels, superintendent/president of West Kern Community College District/Taft College, in a news release.

Though its name will be known around the world in just a few months, TIL staff say the work is never over. Intake billing technician Vicky Waugh explained each year the program is re-evaluated and is constantly evolving in order to make it better and stronger.

But perhaps this holiday season it has a few extra reasons to be thankful.