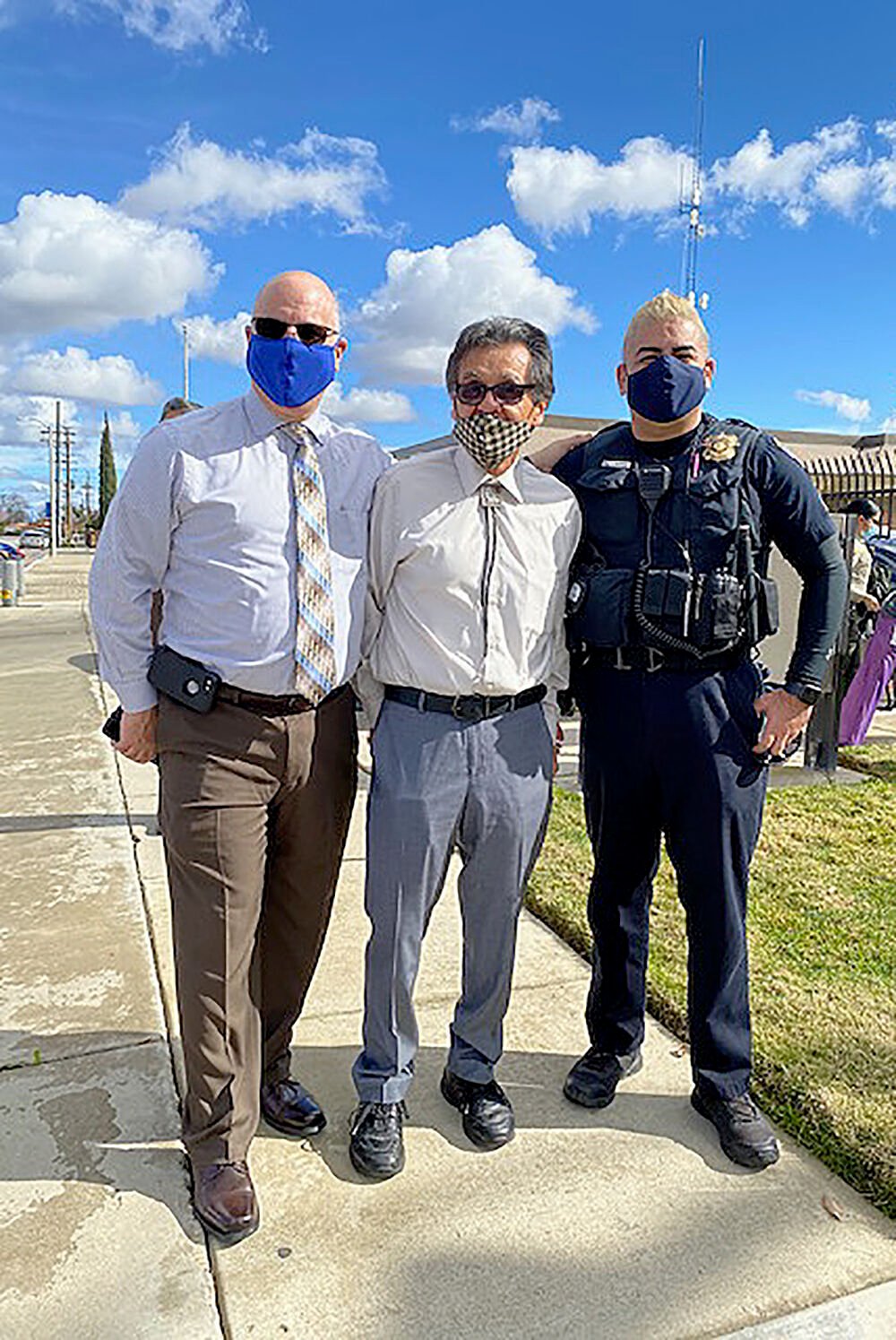 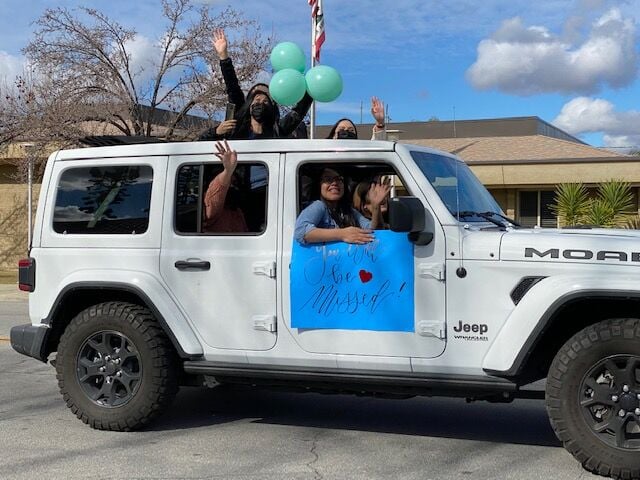 A car drives by to celebrate Judge Robert Tafoya's retirement. 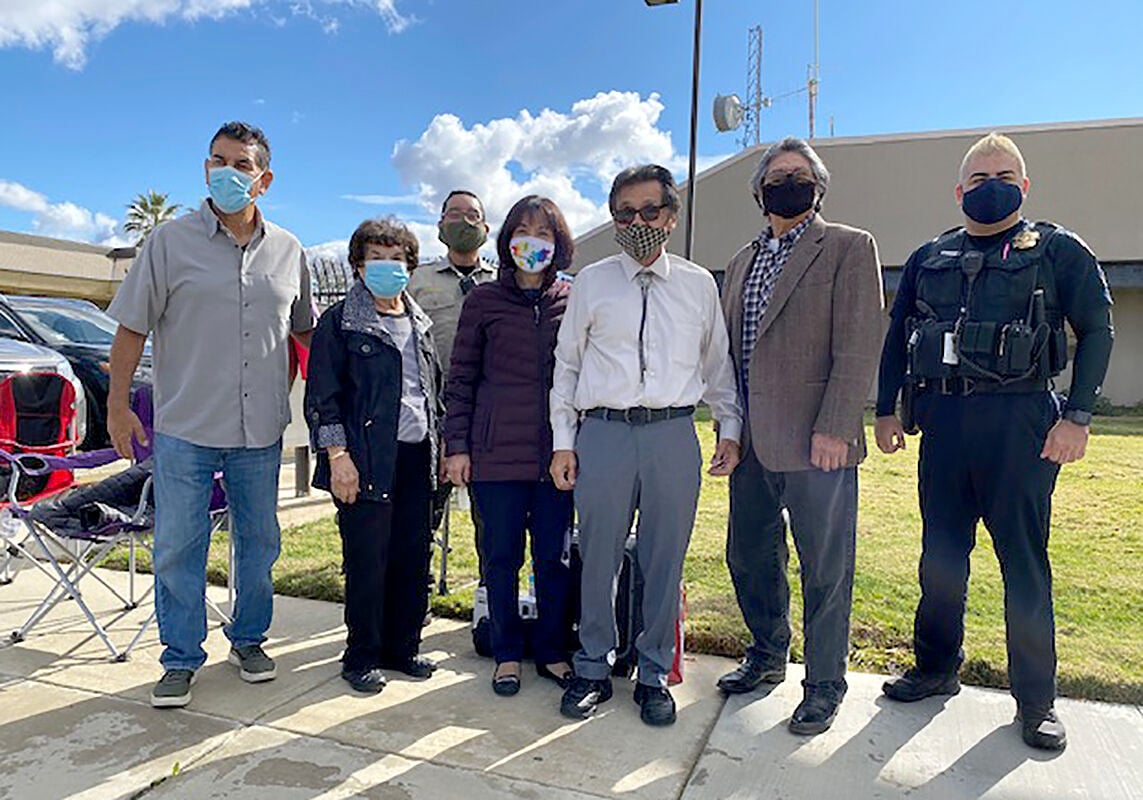 Judge Roberty Tafoya, center, poses with his family and friends after his colleagues threw him an impromptu retirement drive-by parade.

A car drives by to celebrate Judge Robert Tafoya's retirement.

Judge Roberty Tafoya, center, poses with his family and friends after his colleagues threw him an impromptu retirement drive-by parade.

On Feb. 5 at about 1 p.m., Judge Robert S. Tafoya’s staff put together a quick drive-thru parade led by the local Kern County firefighters, Delano police, sheriff’s deputy vehicles, detectives and members of his staff and friends.

Feb. 5 was Tafoya’s last day, and as the judge exited the north end of the Delano court building he heard fire truck sirens and was shocked to be led out by a sheriff’s bailiff. He sat on the north side of the court building with his wife, mother-in-law, daughter, brother and other staff members and waved as they drove by and handed him small gifts and well wishes.

Perhaps, the key to understanding Tafoya comes from the fact that he was a teacher for two years before attending law school. According to those who work closely with him, he has never given up teaching, mentoring and inspiring the youth of Kern County to strive to be their best.

Tafoya earned his bachelor’s degree in history and economics from California State University, Sacramento and his master’s of education from the University of Southern California. Prior to attending law school, Tafoya taught high school. After teaching for a couple of years, he then obtained his law degree from Hastings College of Law.

In 1979, he started his legal career with the Organization for the Legal Advancement of Raza. Then in 1982, he joined the Kern County Public Defender’s Office. After several years there, he entered private practice, starting Rawson & Tafoya law firm. After a decade, he moved to Chain, Younger, Cohn & Stiles, where he practiced until he took the bench. Prior to taking the bench, he practiced law for 23 years, became a family law specialist, and was the president of the Kern County Bar Association.

He was appointed to the bench in August 2002 by then-Gov. Gray Davis.

“Judge Tafoya has a reputation for attacking problems head-on and thinking outside the box,” said Superior Court Judge David Wolf.

“For example, he wanted to try to motivate Kern County students to be better writers,” Wolf said. “He decided that the best way to motivate students was a writing competition with cash prizes. For six years, he headed a group of educators, lawyers and community leaders who raised money for cash prizes, judged the writing entries and provided an awards dinner for the winners and their families.”

In 2011, Tafoya and his wife, Sandra Serrano, were honored by the Arts Council of Kern.

“One cannot truly talk to Robert Tafoya without him mentioning his amazing wife, Sandra Serrano,” Wolf said. She was the president of Bakersfield College and then later the chancellor of the Kern Community College District. They have both been committed to making the world a better place.

Tafoya was asked about his retirement biography and/or providing some words of advice to newer judges. He responded that he did not need a retirement farewell and that he would write his own farewell. As for advice, Tafoya quoted the Four Agreements by Don Miguel Ruiz:

• Be impeccable with your word.

• Always do your best.

According to those who worked with him daily, Tafoya epitomized these agreements.

“Your retirement is a significant loss to us and our bench; however, it is also well deserved,” Wolf said. “We all wish you and Sandra an amazing retirement and hope you come back soon and often.”